This time, when the Subaru brand is excitedly celebrating the 50-year-old legendary Boxer engine around the world, it is also time we have the opportunity to experience with one of the best-selling models of this brand. , Subaru Forester 2016.

The Vietnamese market is ultimately a healthy land for Asian brands in general and Japanese automakers in particular. Not really as popular as the local rivals but with its very own identity, the Subaru brand is a remarkable choice for many car players in Vietnam. 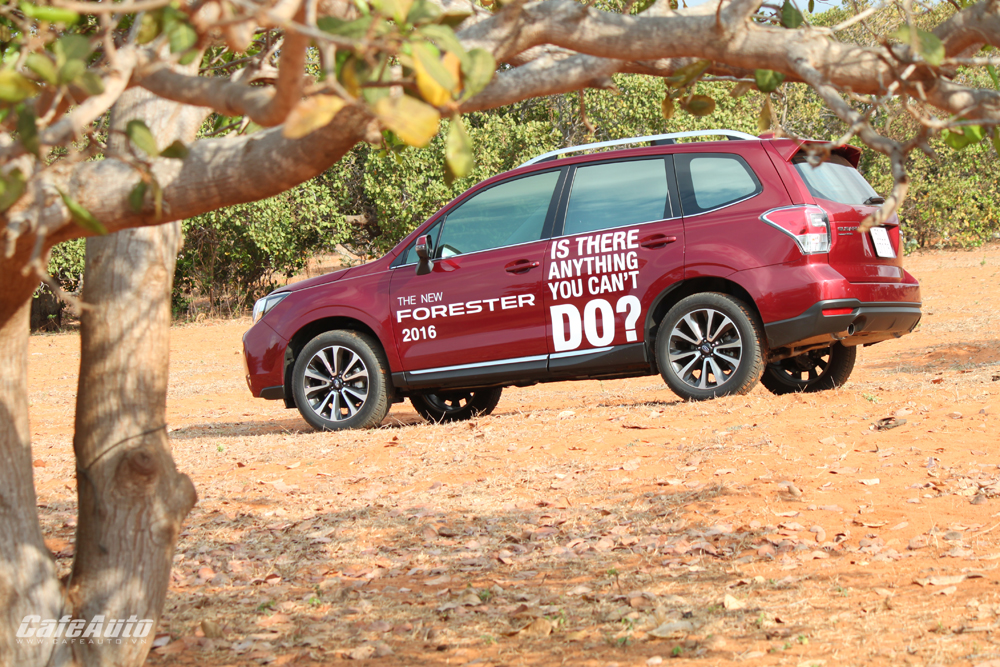 Subaru Forester 2016 The upgrade with many changes in the exterior, increasing comfort with the accompanying equipment, based on the foundation of the famous Boxer operating system will be an attraction not to be missed for those who want own this model. The journey of more than 500km from Saigon to Phan Thiet and vice versa with many “good” tests has helped us somewhat feel valuable changes, especially the performance of Forester “warriors”. 2016. 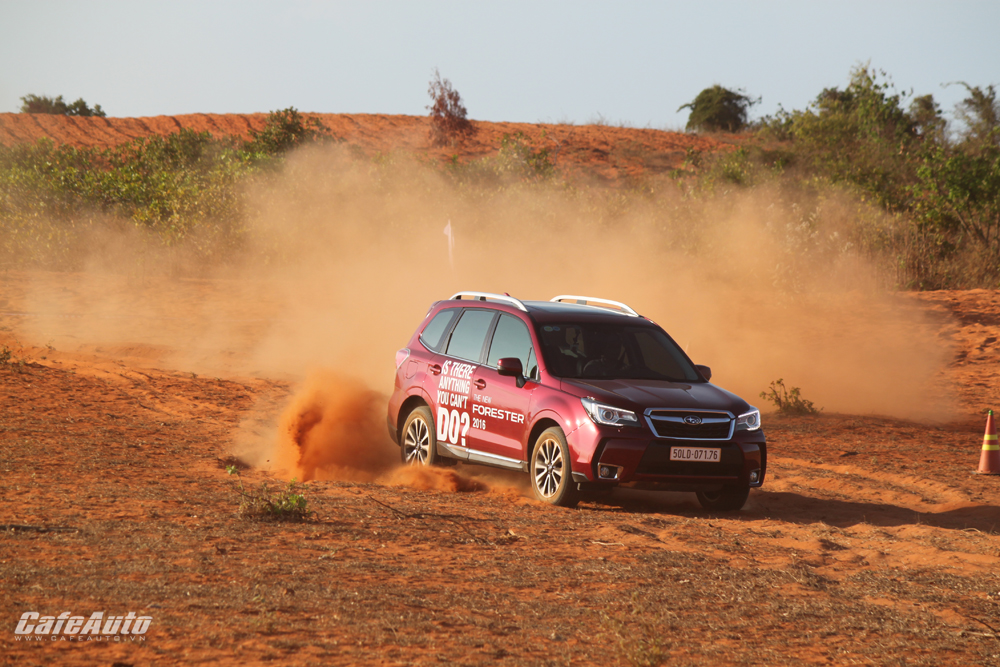 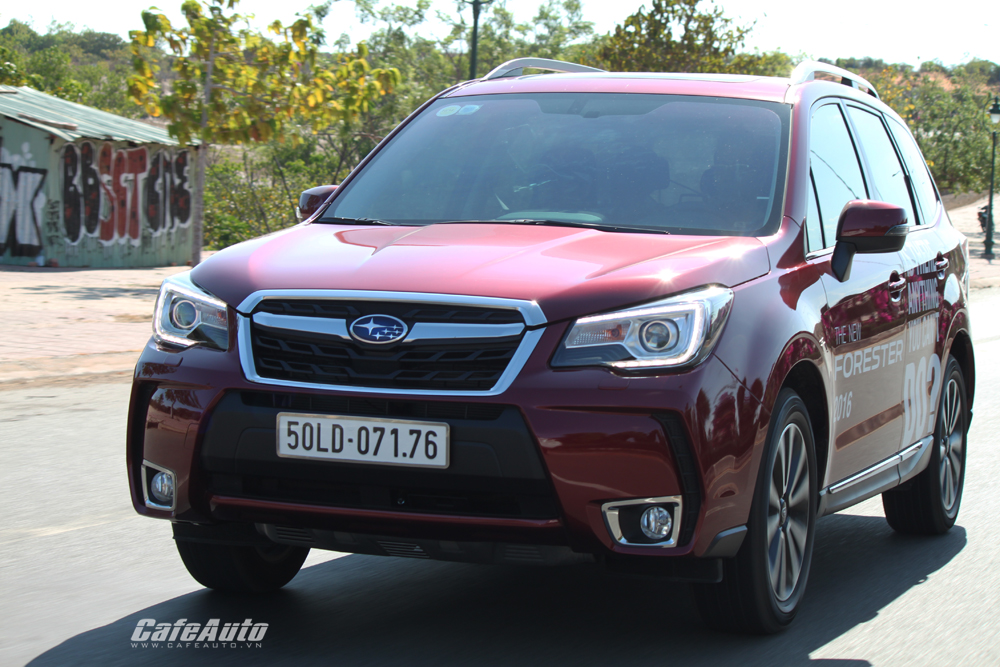 Not long after debuting in Thailand, Subaru Forester 2016 has arrived Vietnam market with two versions: 2.0i-L, priced at VND 1,445 billion and 2.0XT at VND 1,666 billion. As a facelift, it won’t bring too much makeover, represented by a completely new look. But “little but quality” is a phrase that can give an overview of the exterior design of this model. 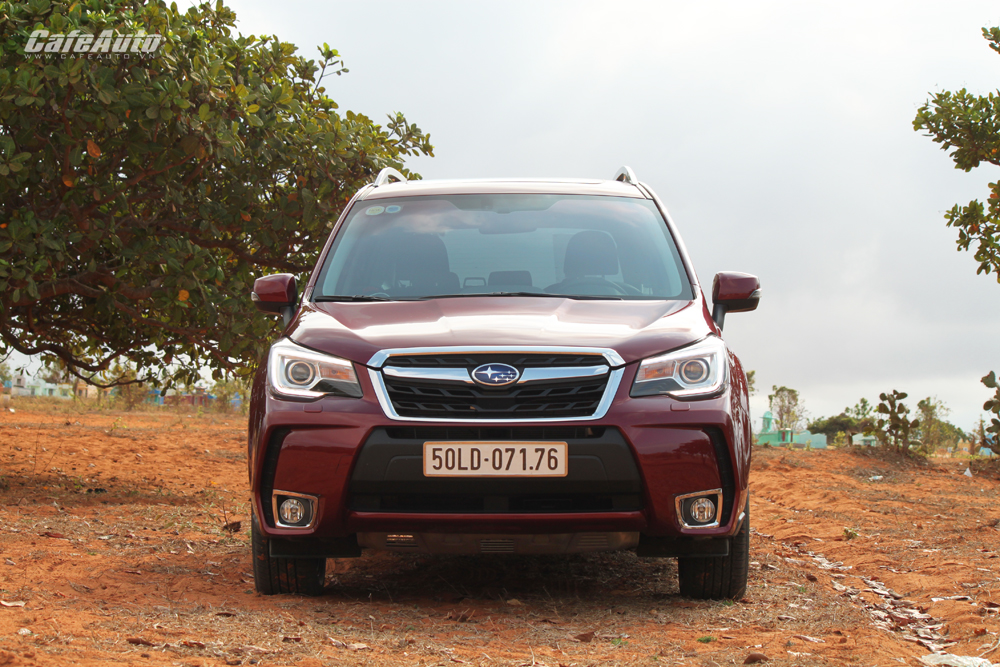 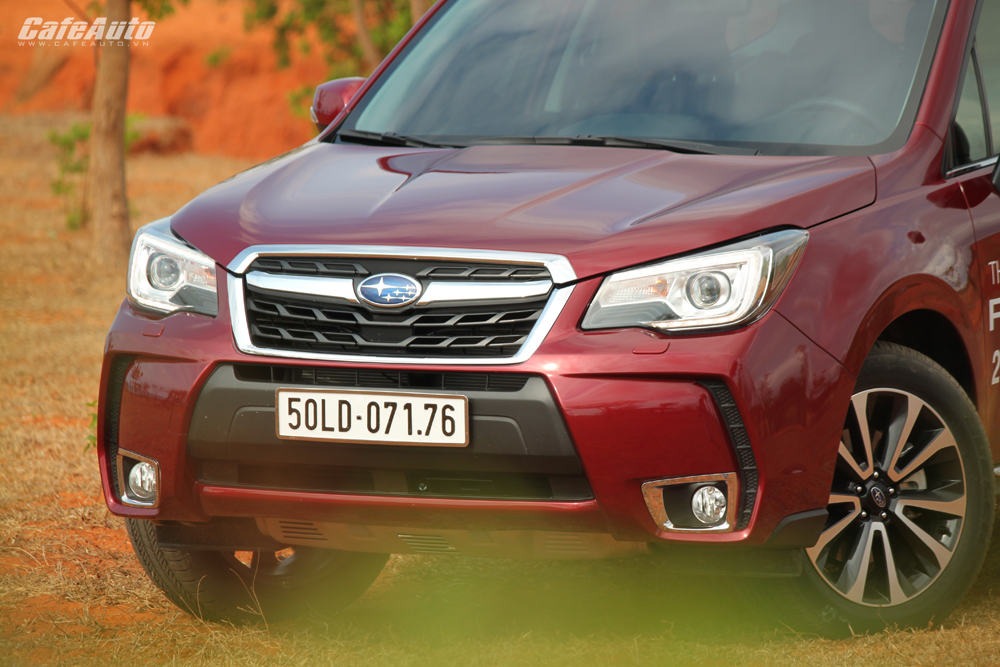 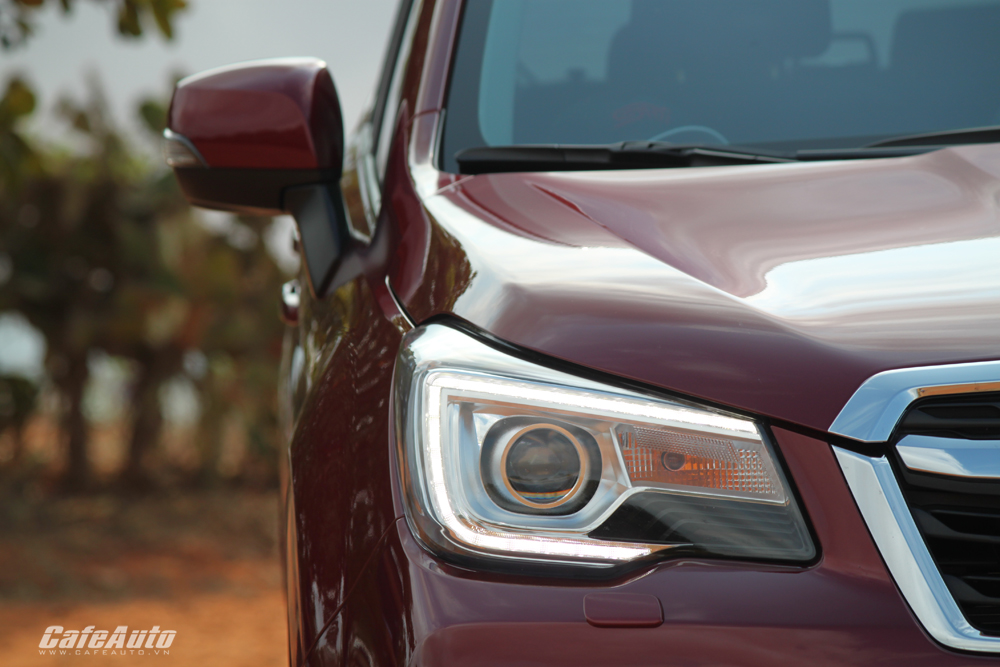 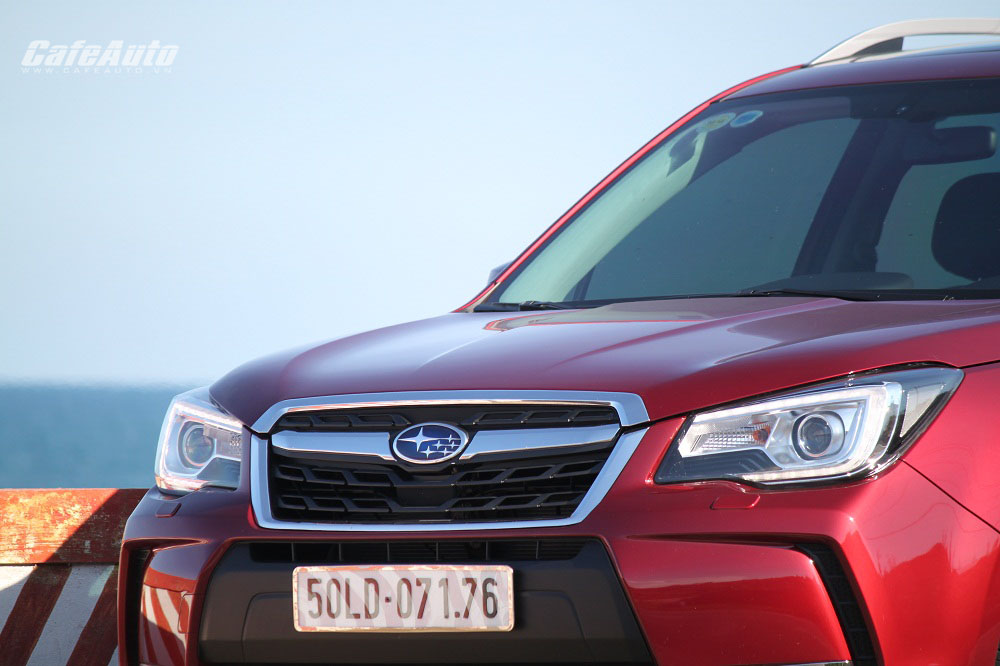 Compared to the old version, Forester 2016 still has a boxy design with angular lines and masculine bodywork. A noticeable change in the head section with a nearly completely refreshed look with a more polished hawk headlight cluster, capable of steering angle control and integrated daytime lights LED format. 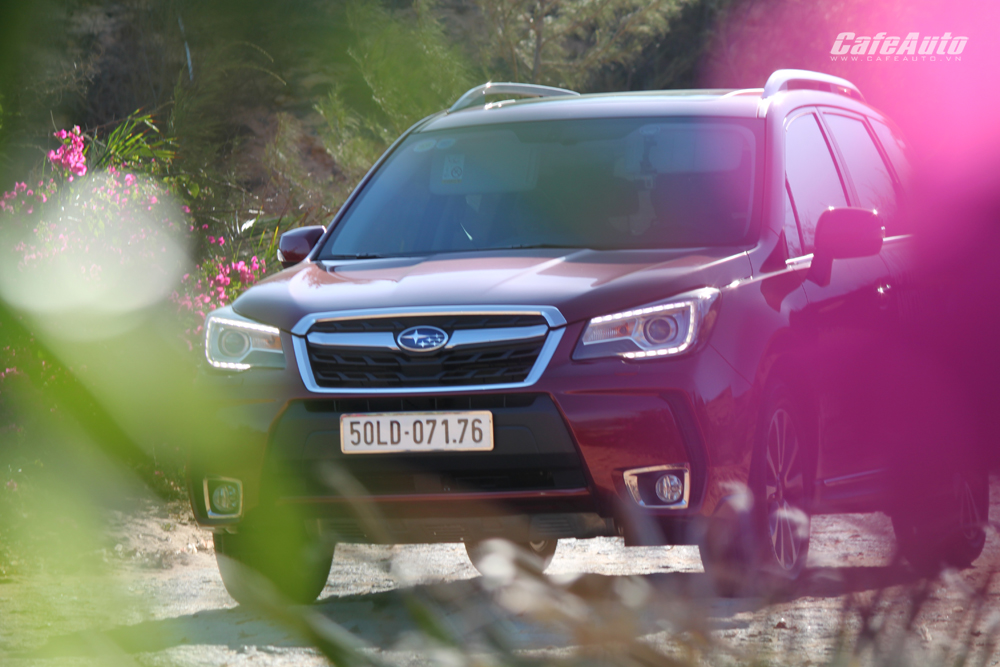 Accompanied by a hexagonal grille with chrome trim around the more modern, embraces the logo of the star constellation Subaru brand. Or the fog lights on both sides have been less monotonous, instead adding a cut line on the side to bring a sense of muscle to the car. 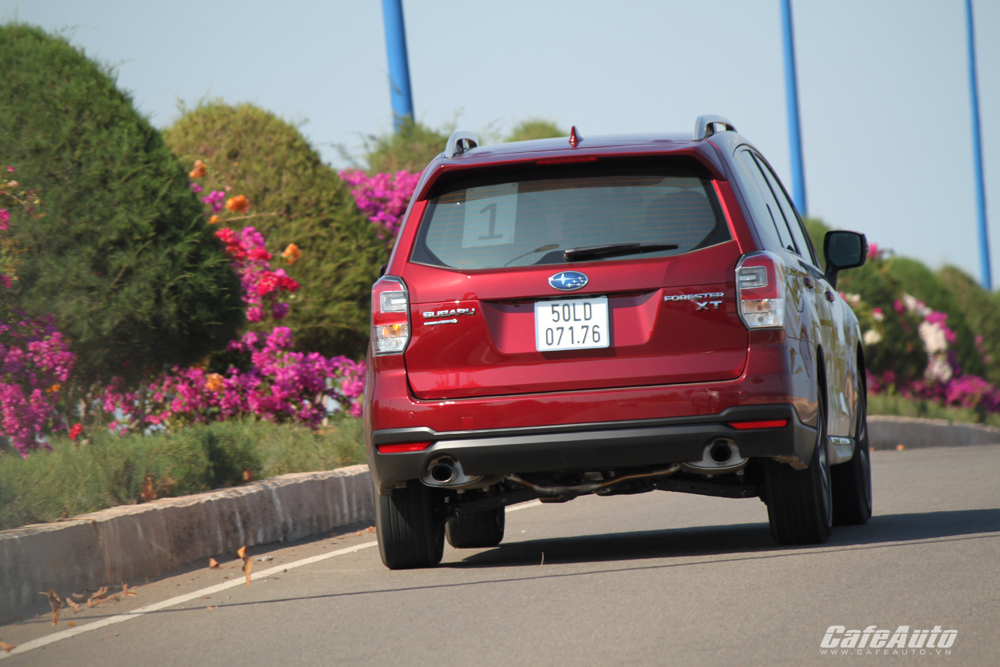 At the rear, the C-shaped taillights and the rear bumper have not changed much, but a few minor tweaks bring more aesthetics to the tail. In addition, two other changes can not be ignored is the body has more strong embossed lines, the rearview mirror with the turn function with a new design. Or a chrome-plated metal bar under the door sill and new 5-spoke dual-spoke sport alloy wheels, 18 inches. 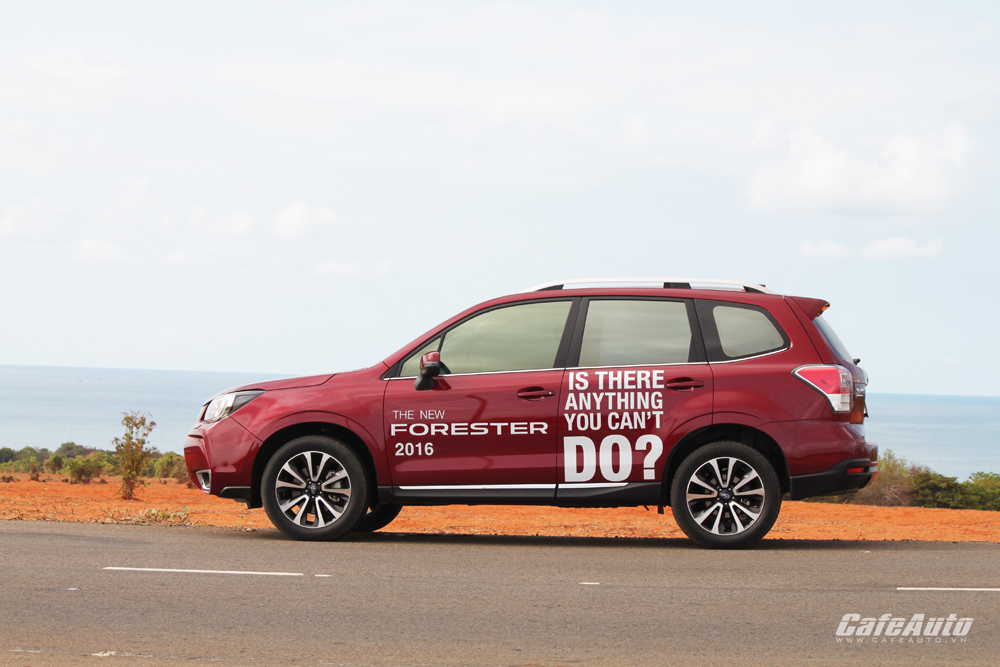 Overall, the appearance of Subaru Forester 2016 compared to its predecessor thanks to many design changes that helped increase the masculinity of the car with a square, more solid than before. And what’s important is the modernity and the sportiness exerting from those differences. 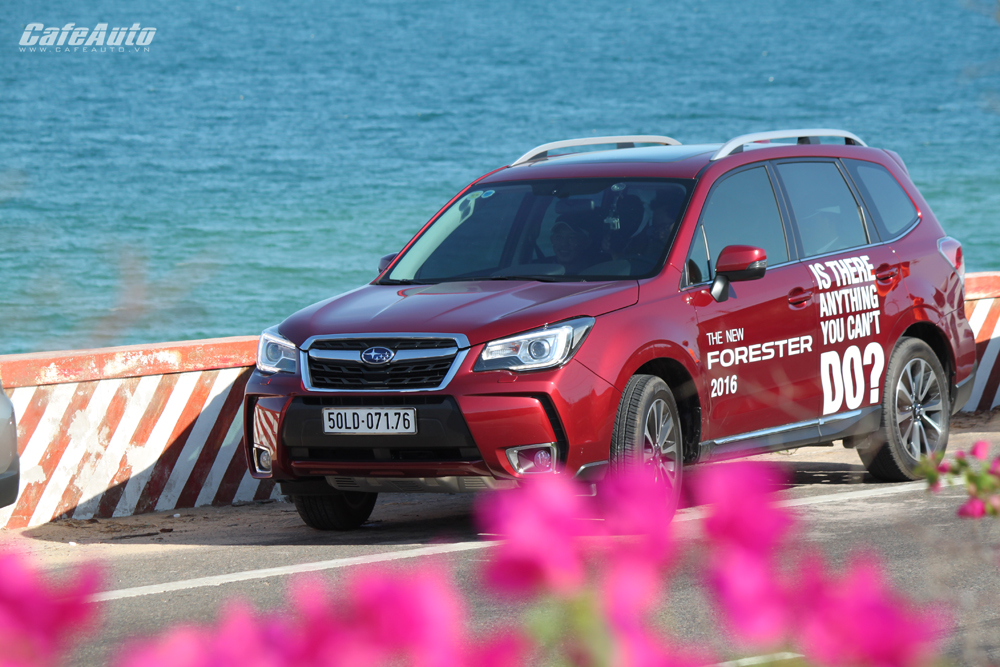 We often refer to the pragmatic and not too polished in the design of the Subaru brand, especially in terms of interior. Despite being dubbed the “Porsche of Asia”, in fact, the Japanese brand can not “match” the glamor or luxury as the German car company. The common point in these two names is to create an unmistakable definition, which is a non-styled attraction through speakers that needs real experience and feel. 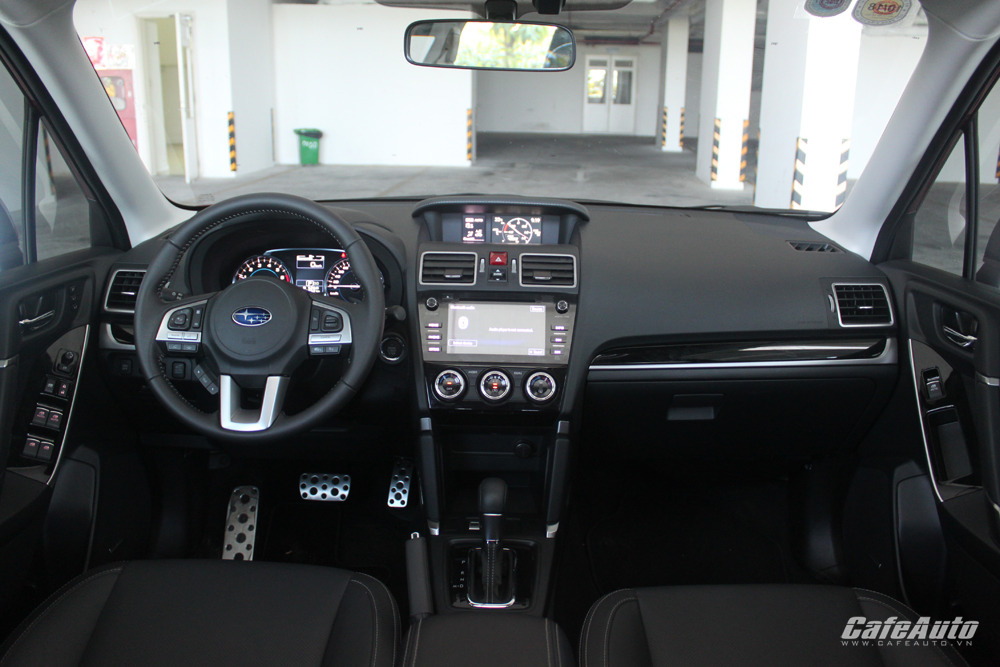 The updated cockpit of the Subaru Forester 2016 brings some new features in the new 7-inch touchscreen center console. This unit is integrated with Starlink control system with the ability to display the interactive menu visually with users, by direct touch or control buttons on the three-spoke leather-wrapped steering wheel. However, the sensitivity of this function may not yet bring the feeling of absolute smoothness to the user. 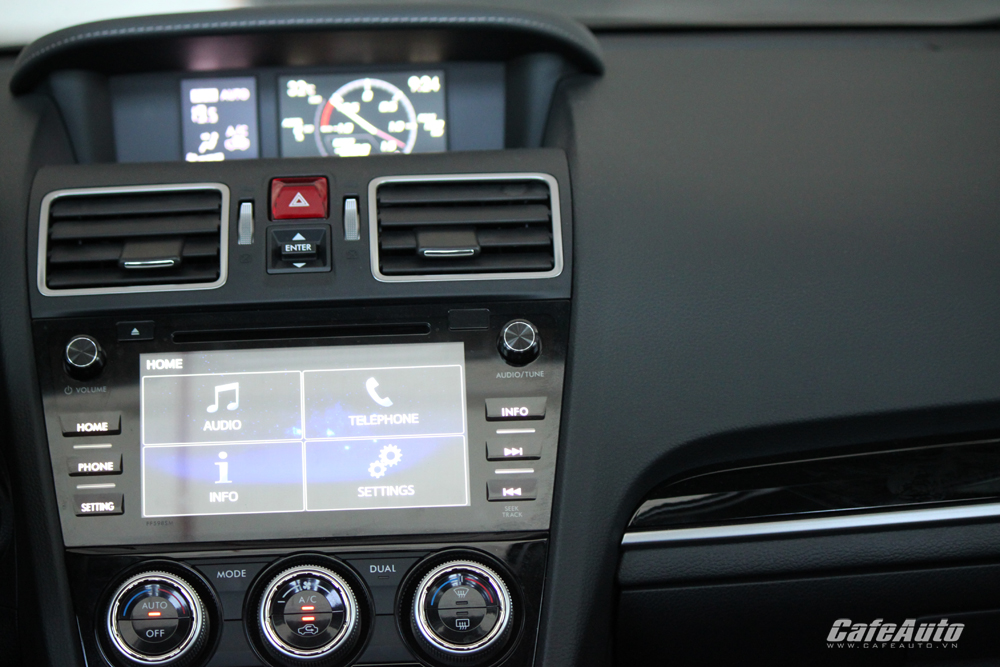 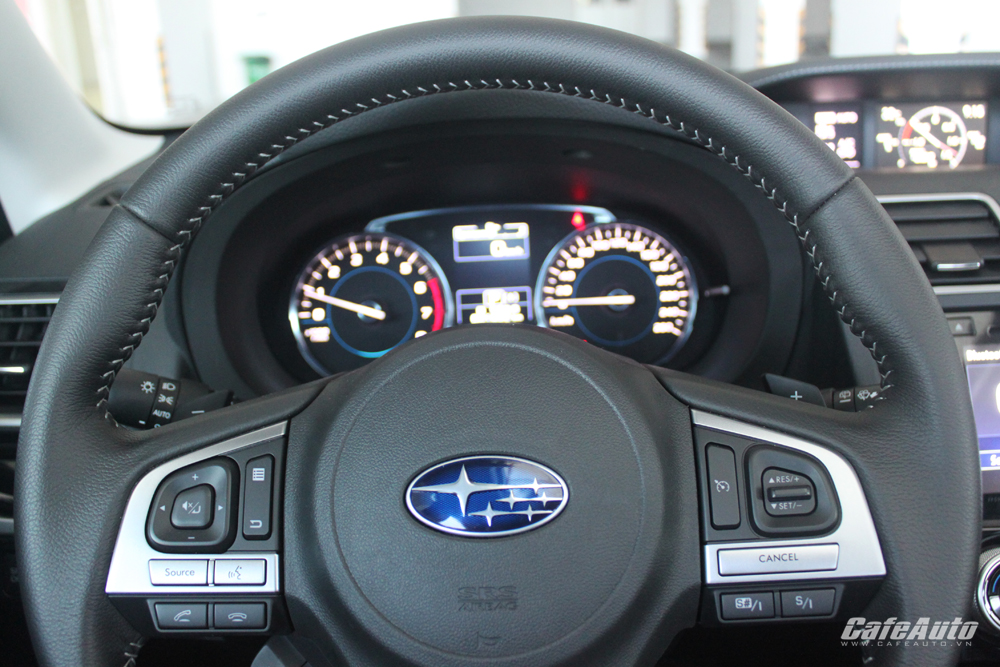 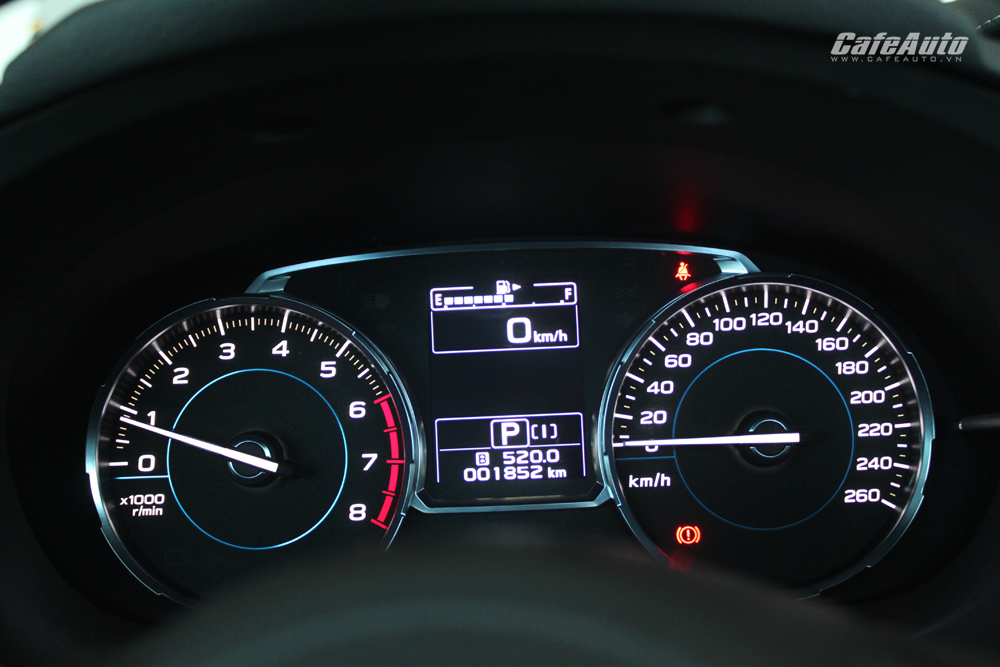 Inside the multi-purpose vehicle of the Subaru brand is also a leather seat system, separate power driver seat with memory function. It is equipped with an electric sunroof, connecting ports for mobile or multimedia devices, starting with buttons, locking and unlocking the car with a pin … 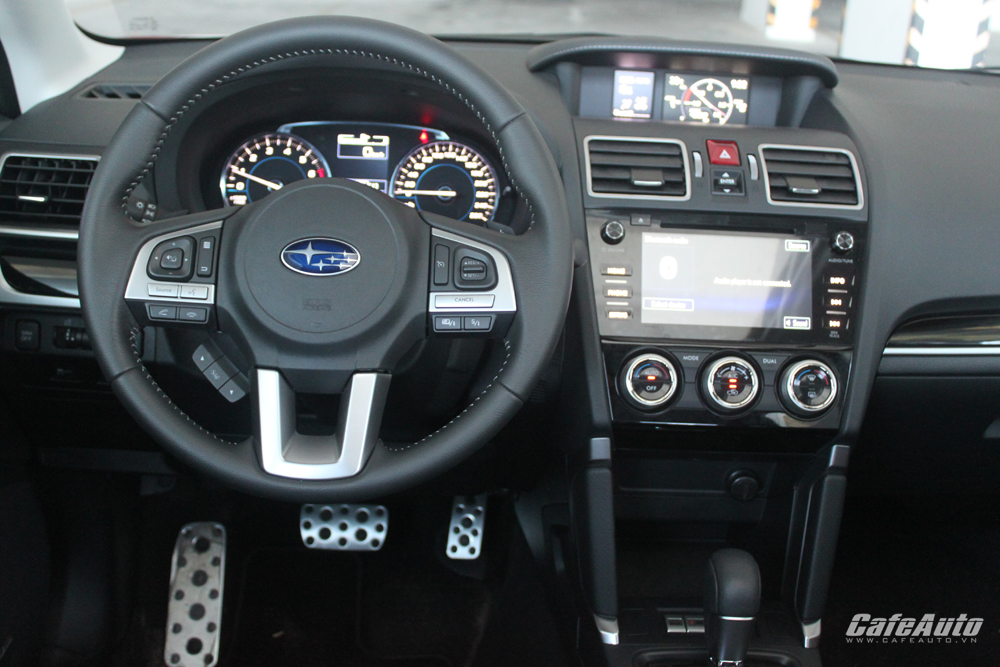 In addition, there is a Harmon / Kardon 1 CD audio system, 8 speakers, and an audio amplifier. And in terms of entertainment, if you want to enjoy your favorite music with good sound and clarity, the front seats are a more appropriate position inside this car. 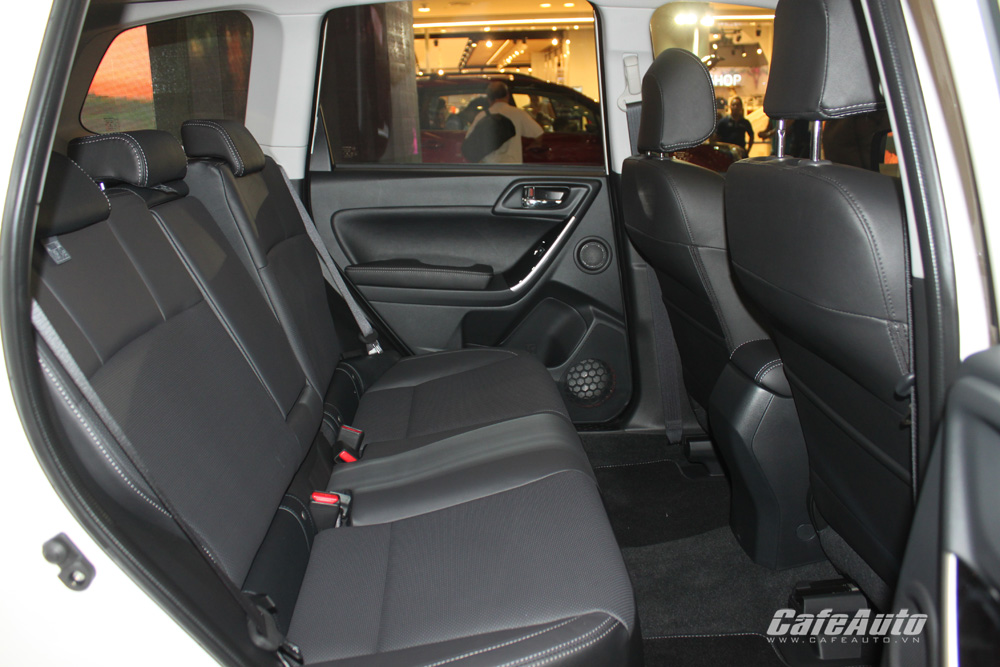 Because of its box-shaped design, not only is the space more comfortable for the occupants, but the distance between the ceiling and the head is not a problem. The rear seats can be folded in a ratio of 60/40, helping to increase the rear luggage space to 2,115 liters from the conventional 974 liters. The electrically adjustable trunk and memory height will also bring convenience to the vehicle owner. 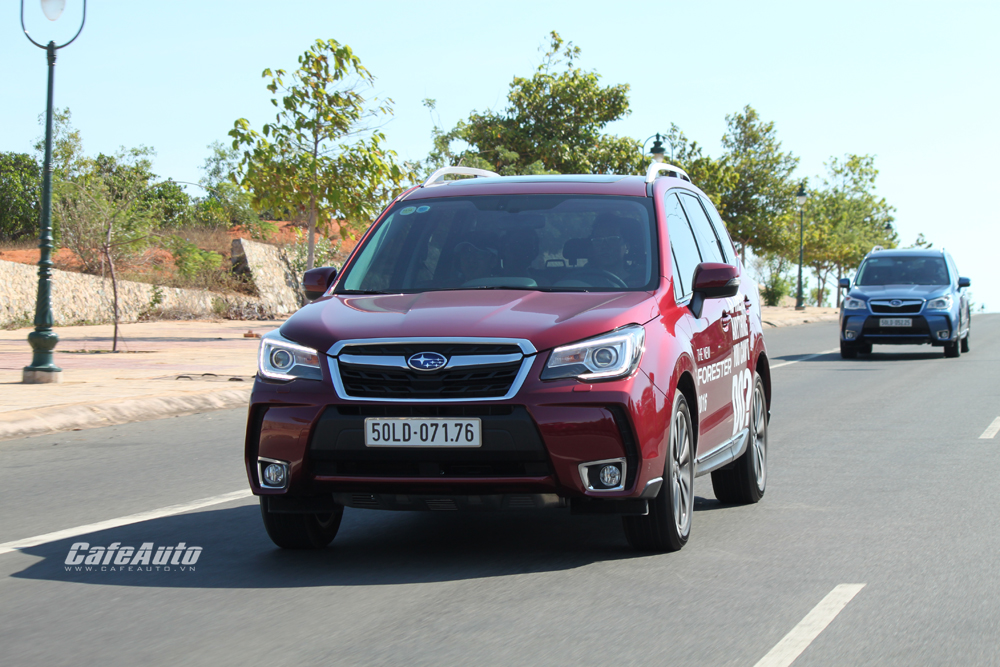 Our schedule starts quite early in the city. Ho Chi Minh City to Phan Thiet but with large traffic in the morning, so it was quite late compared to the original plan. Therefore, in return, fast travel speed on both the road and the highway is also necessary experience to feel the ability to operate initially of this vehicle. Starting from TP highway. Ho Chi Minh City – Long Thanh – Dau Giay, speeds above 80 Km / h and more often kept. In the high speed range, the body of the lagoon and the steering wheel respond quickly to the road surface, helping us confidently make turns when passing other vehicles. In this respect, the Subaru multi-purpose car performs quite well. 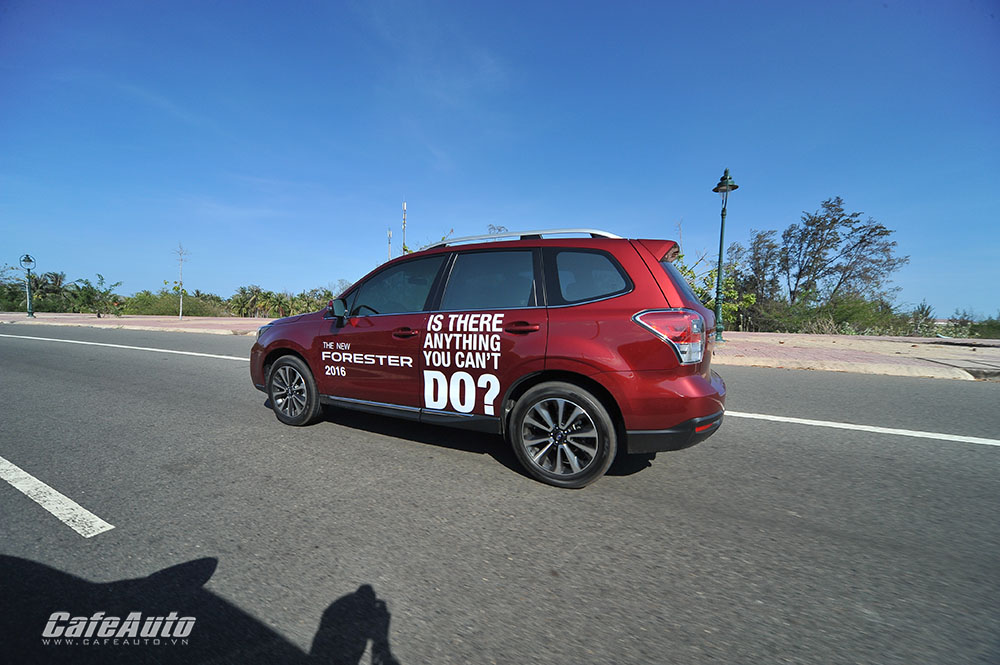 Starting the S mode in the intelligent 3-mode steering system Si available for Forester 2016, the driver can feel the engine roar but not too excited as pure sports cars, but the sound echoes. The rear compartment shows a good “grip” and the throttle sensitivity is completely different from the normal travel mode i (fuel economy).

Crossing the highway and taking an average travel time on NH51, we started off on a short drive through the less populated areas with dragon fields on either side before coming to the tourist city. Phan Thiet, Binh Thuan. Here, some of the roads with bad surfaces with many undulating points, the feeling of ballast and shock for the people in the car are clearly visible. However, for a versatile vehicle like Forester 2016, requiring the smoothness when traveling through such road conditions is an over-perfection. 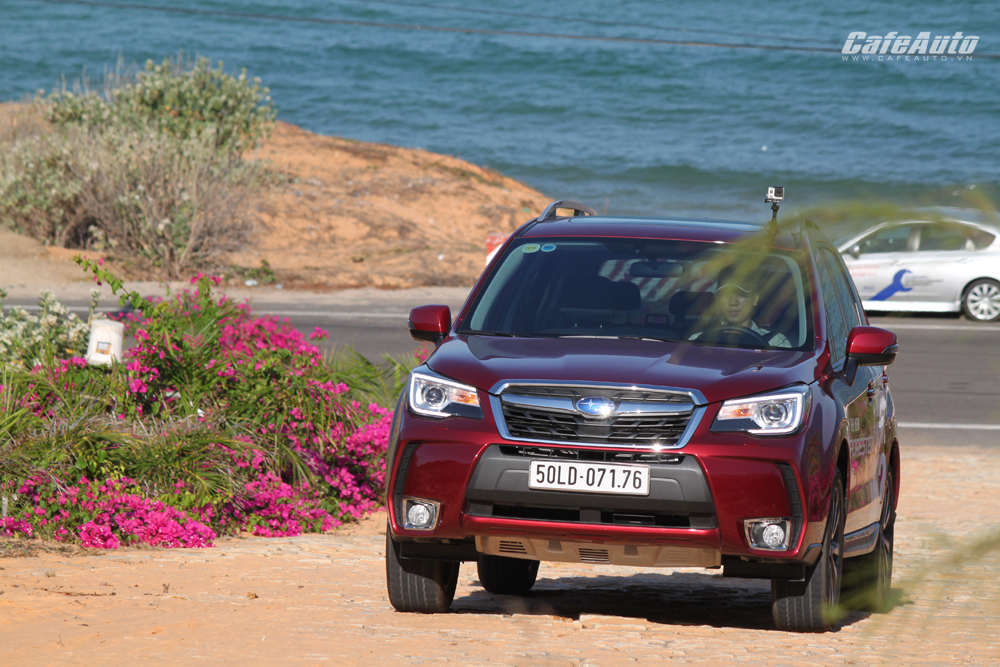 After arriving at a resting place and resting as well as enjoying a few seafood dishes in Phan Thiet, we began our first challenge with a “companion” with the climb test. Thereby exploring the X-Mode function, a new detail that is equipped on the Forester 2016 upgrade has been available in Vietnam not long ago. 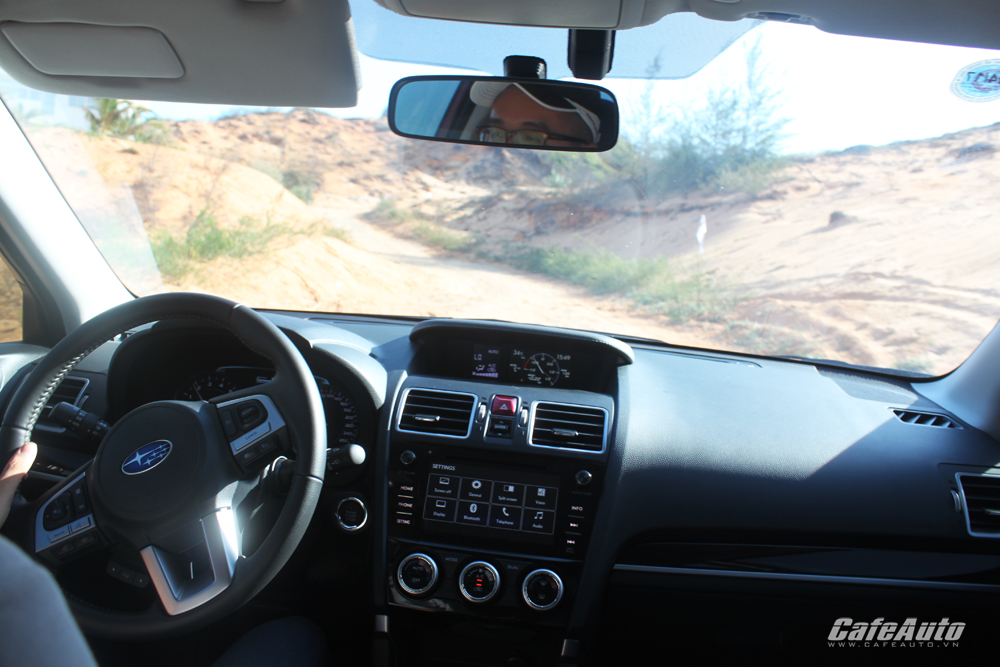 Starting the X-Mode function button right next to the gear lever, we hold the throttle and move slowly to climb the slope. The wheels start to start and the car conquers a fairly high slope in a coastal hill very easily. In the opposite direction when going down a slope, the driver only controls the steering wheel and releases the brake pedal completely, X-Mode will automatically brake the car and keep it at a safe speed. 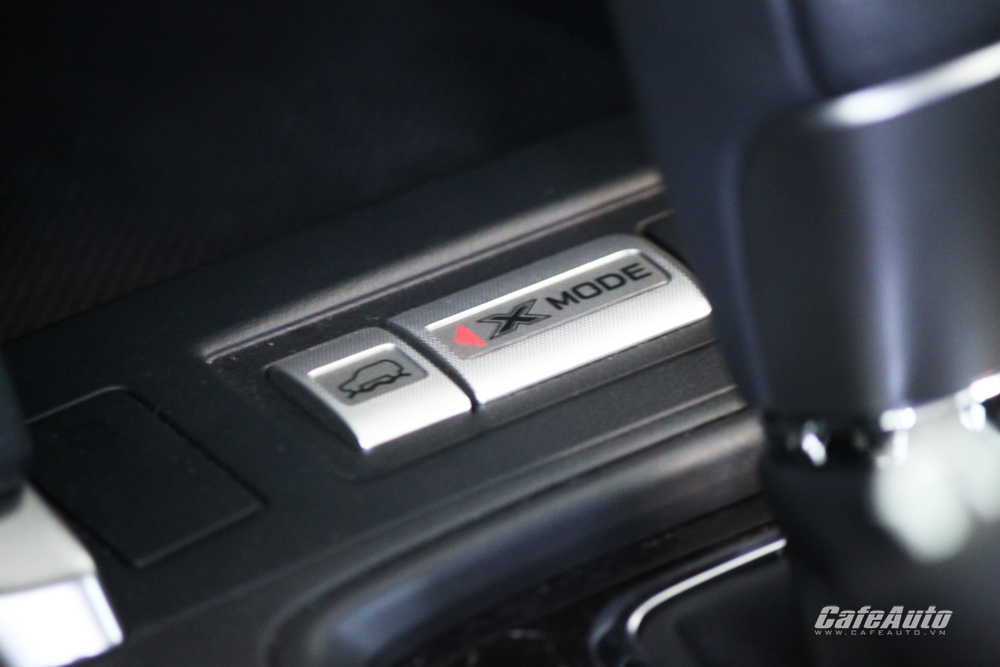 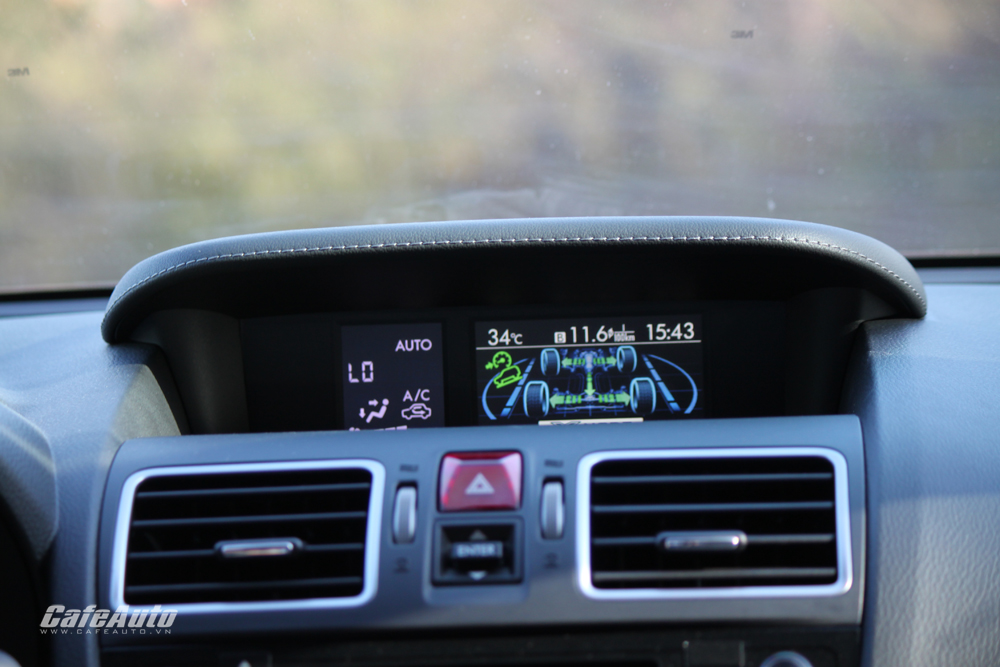 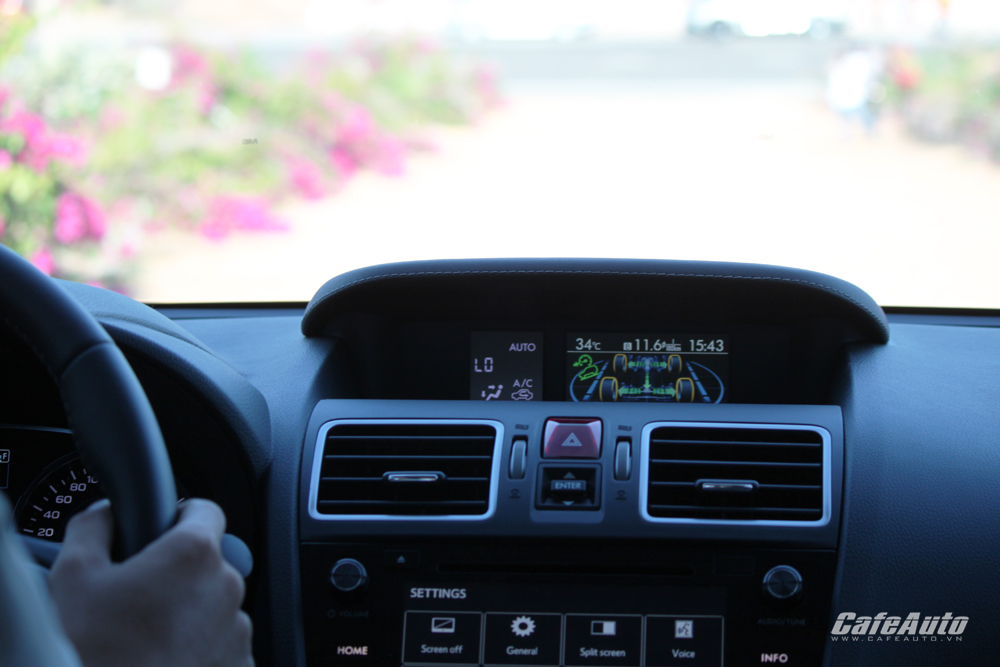 Obviously with this initial challenge, the support system for climbing and downhill has helped Foreter 2016 not face many obstacles due to the steep and difficult terrain. 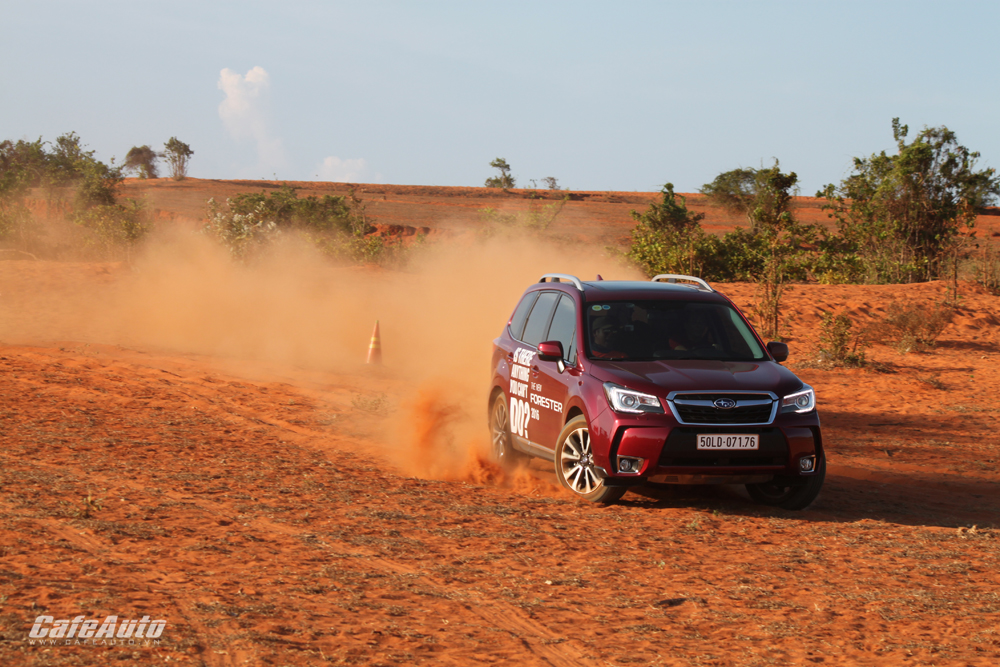 According to Subaru engineers, the S-AWD all-wheel drive system and the 2.0XT turbocharged engine will help the driver conquer more complex terrains. In the working principle of the drive system, torque is transmitted to all wheels. If one of the wheels cannot work, the torque of the torque is not lost, but it is transmitted back to the remaining wheels, ensuring no loss occurs. This optimizes traction for the vehicle when going through complex, offroad terrain. 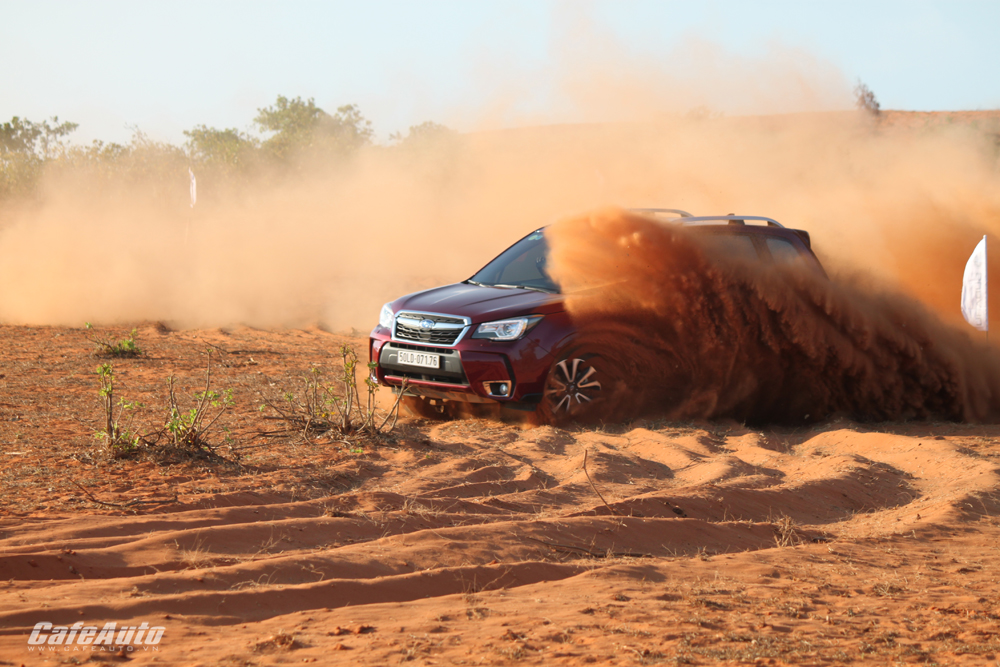 And we also had the opportunity to verify that strength of Subaru Forester when unleashed “pants” with the car on a hillside land. Pressing the accelerator and driving continuously through soft ground, quicksand, the rear end of the car is not lost control, traction and stability of the Forester 2016 is a remarkable thing. In fact, with the reinforcement of the frame, the stiffness of the spring in both the front and the rear has been improved, helping the car to be better controlled when offroad and bring a really exhilarating feeling. encourages the driver. 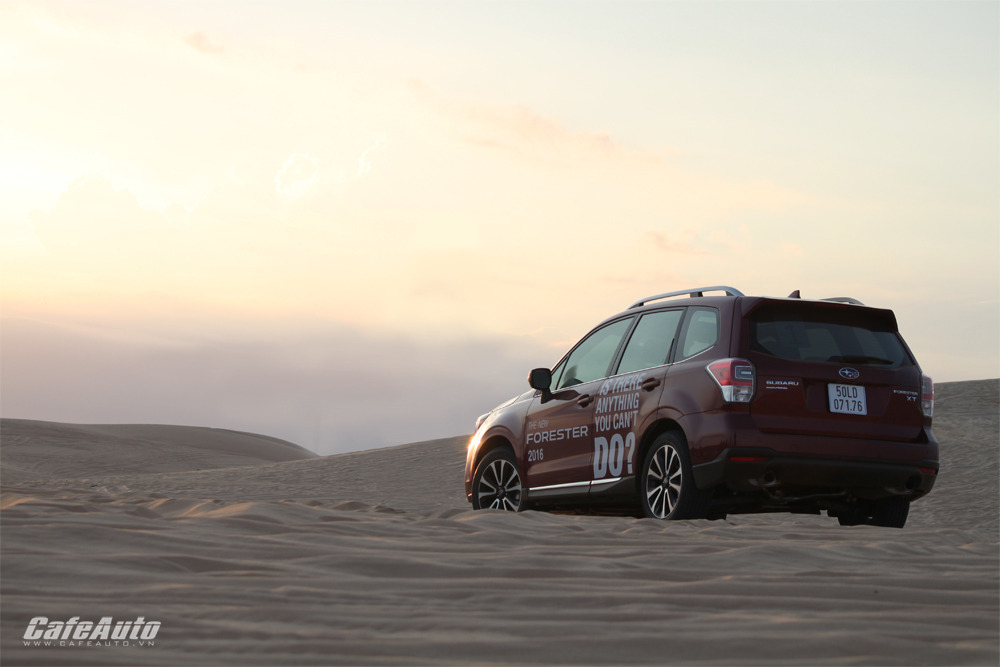 A “heavier” challenge when we decided to stop on the beautiful white sand in Mui Ne, Binh Thuan to watch the sunset. Here, if you feel hesitant about the unanticipated possibility of being forced to “get help” or even spend the night with your car on the sand hill, Forester 2016 won’t let you have to. fall into such circumstances. 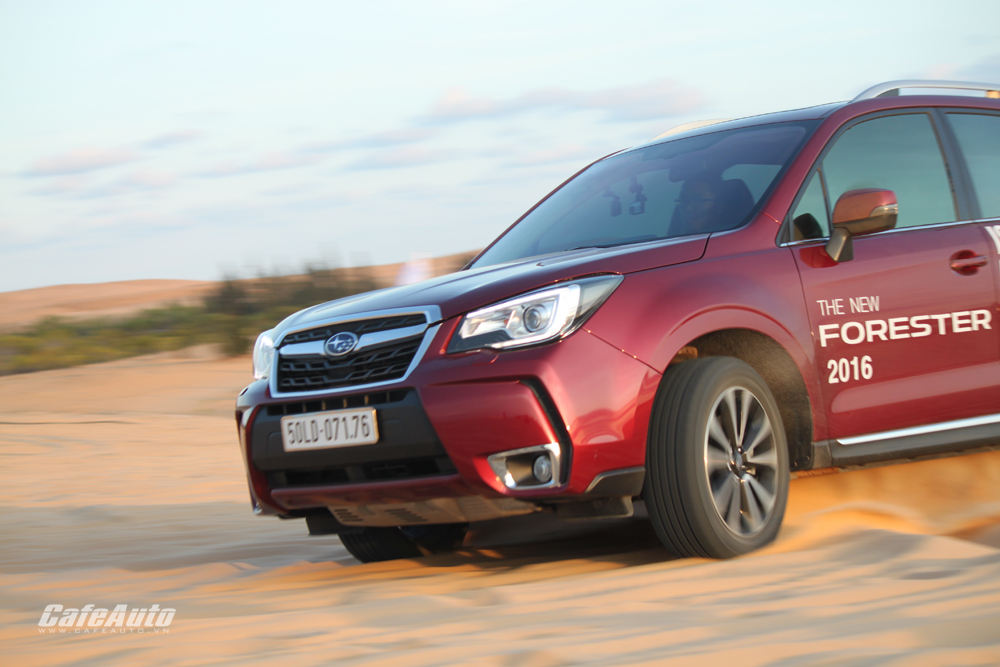 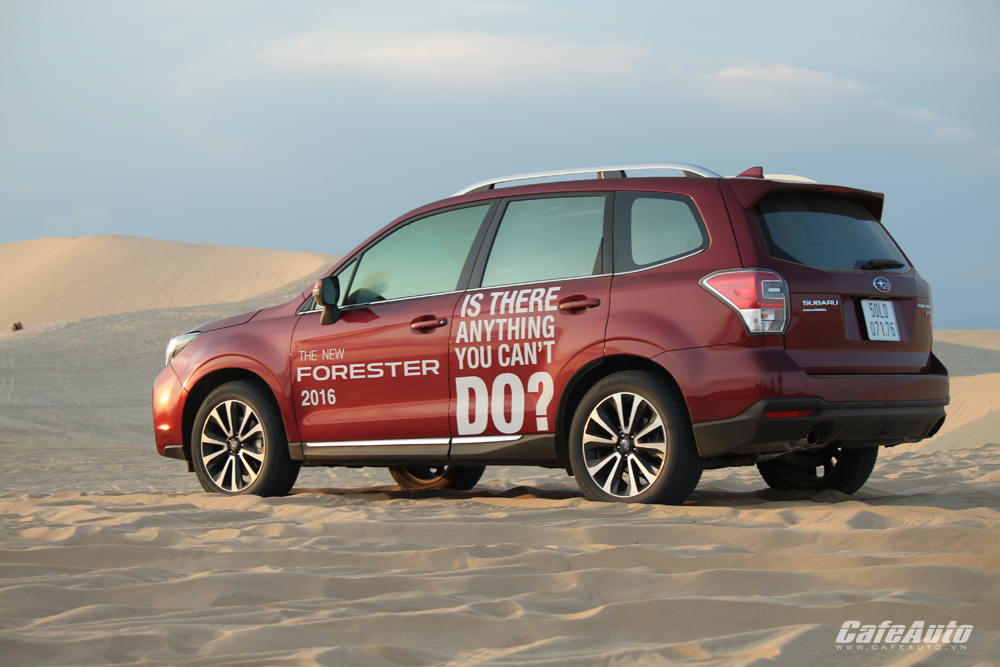 It is no coincidence that Subaru’s list of safety standards is regularly present and appreciated. Forester 2016 is similar to its “brothers”, in addition to owning the famous Boxer engine, many safety features are equipped to bring the highest peace of mind for users. 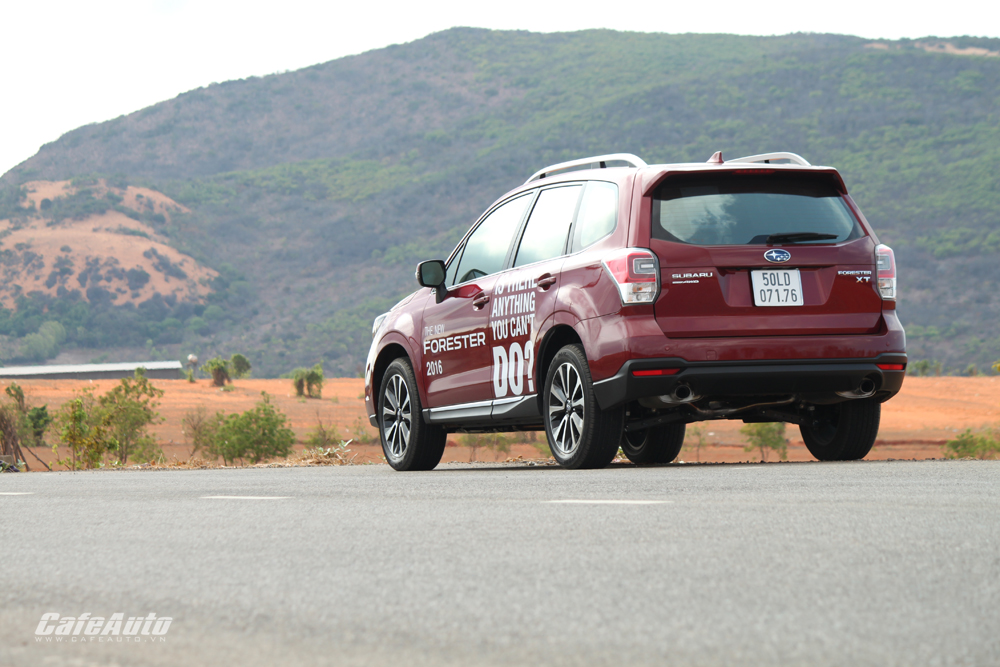 The practicality is indisputable when driving the upgraded Subaru Forester 2016. The new features and equipment added on this version along with the powerful performance of the Boxer engine, are valuable pluses for those who want to choose a model that is “good value for money”. .

Post Views: 60 OPPO A9 2020 possesses impressive hardware specifications with 8GB RAM, 48MP rear camera system and a "huge" 5,000 mAh battery. Recently, slashleaks has posted a promotional image of an upcoming mid-range smartphone of OPPO A9 A9. Thanks to that, we have the first information about the design and configuration of electricity. this […]

Firefox 69 officially launches tomorrow, but you can install it now

Post Views: 36 Tomorrow, Mozilla will release Firefox 69 to users around the world. However, if you want to receive this update now, you can feel free to visit Mozilla to get the appropriate installer for your device. Users can now download and install Firefox 69 MacOS users benefit the most from Firefox 69, which […]