With luxurious designLong battery life and dust / water resistance, the Xperia Z2 Tablet is actually one of the most desirable Android tablet models today.

Combined in a slender body is a powerful Snapdragon 801 processor, a high-quality Full HD screen and battery life "terrible", Xperia Tablet Z has received many compliments from the technology world. But will all these strengths help the Xperia Z2 Tablet against stunned competitors like the iPad Air and Galaxy Note 10.1? Let's come with the reviews LaptopMag To get the most appropriate answer. 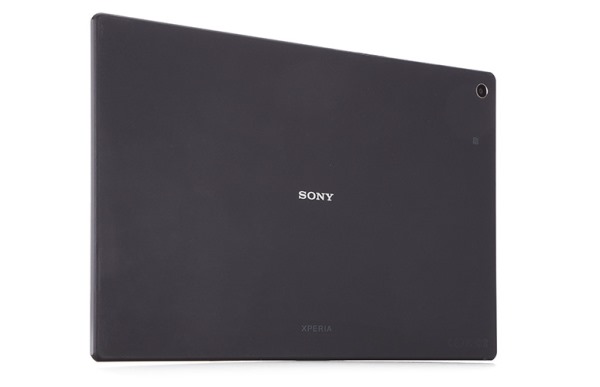 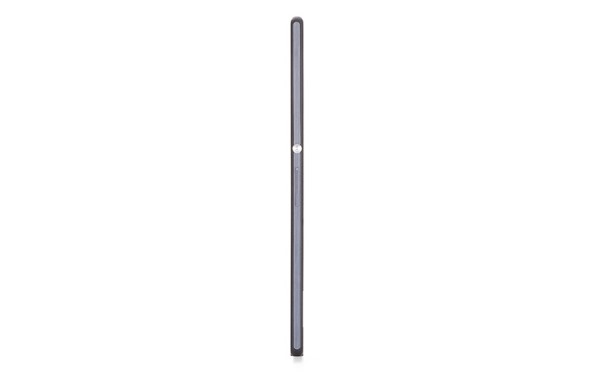 In addition to the change in weight and thickness, the Z2 Tablet's design has not changed much compared to the tablet launched last year. The body is generally quite square, but the corners and edges have been more rounded, making it easier for users to hold with one hand.

And like Tablet Z, the back of the device has soft texture that feels quite comfortable when holding on the hand but it is easy to stick to fingerprints and other stains. The design language of the Xperia Z2 Tablet has generally gone in a minimalist way: the only two details that stand out from the camera body are the power button and volume control button on the left side of the body.

The edge of the Xperia Z2 Tablet has a microUSB port and a microSD port that allows expansion to 128GB of memory. Both ports are located behind a protective cover. This is an essential element to help prevent dust and water, but these covers can be uncomfortable during use. 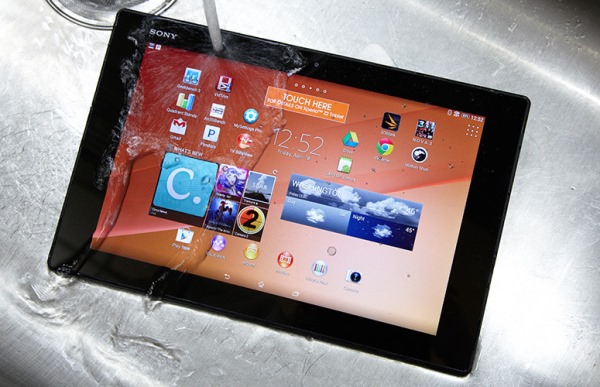 Xperia Z2 Tablet continues to be equipped with IP58 waterproof capability. This waterproof tablet can withstand 30 minutes of "diving" at a depth of 1 meter. In actual testing, LaptopMag has dipped the Xperia Z2 Tablet in a water-filled tray for several minutes. As expected, this tablet is completely unharmed. 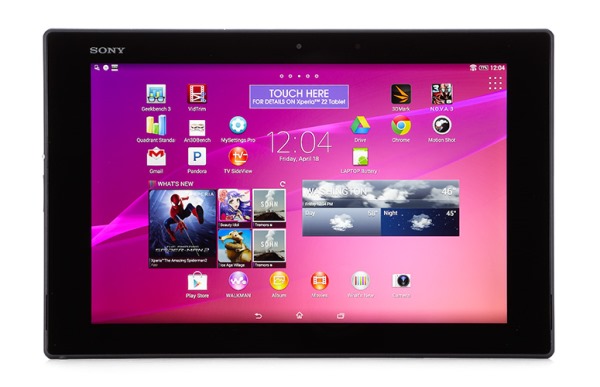 Sony is a company known for its high-quality display products, and the Xperia Z2 Tablet is not out of this tradition. The Triluminous brand 10-inch screen incorporates Sony's X-reality imaging technology, making the Xperia Z2 Tablet display fresh colors without being saturated.

According to Sony's claims, the Xperia Z2 Tablet can display 130% of the sRGB standard color range. The number due LaptopMag Actual test gives similar results: 124.7%. The visibility of the Xperia Z2 Tablet surpasses both Note 10.1 (93%), iPad Air (99%) and an average of 84% of tablet models available on the market.

In the Delta E test that measures the color accuracy (the lower the better, with a score of 0 being the best score possible), Z2 scored an impressive score: 2.6. The top tablet of Sony is only inferior to the iPad Air (1.4) and surpasses both the Note 10.1 (4 points) and the 5-point average. 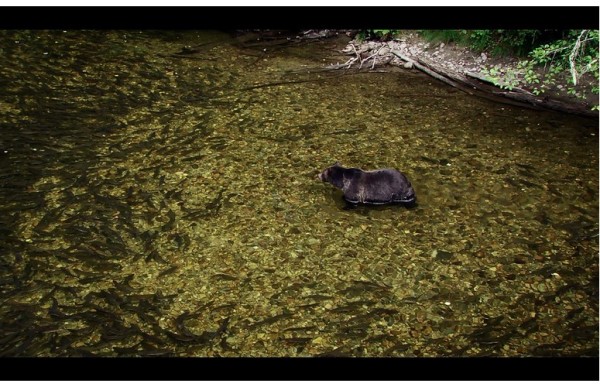 Watching the trailers of Bears and X-Men: Days Of Future Past films, the vibrant colors and sharp details on the screen of the Xperia Z2 Tablet will surprise you. The editor LaptopMag confirms that both the Beast and the red fur on the hair of Mystique's character are extremely impressive.

The Full HD 1920 x 1200 pixel resolution of the Xperia Z2 Tablet is no longer catching up with competing products. The iPad Air is equipped with a 2048 x 1536 pixel Retina resolution, while the Note 10.1 has a resolution of up to 2560 x 1600 pixels. However, it should be noted that except for high-resolution photos, there are currently few applications that can take advantage of the 2K resolution on Android.

The Tablet Z generation first puts speakers on both sides of the camera body and can therefore be accidentally covered by the user's hand. On the Xperia Z2 Tablet, Sony has overcome this weakness by bringing the speakers to the front. While the volume of the speakers on the Z2 Tablet reaches 82 db, well above the 67 db of the iPad Air and 78 db of the Galaxy Note 10.1, the sound quality of the Xperia Z2 Tablet will not satisfy some users.

When watching videos or listening to music, high-pitched sounds (such as movie or guitar explosions in Bruce Springteen's Glory Days) you are more likely to experience glare, especially at high volume. The bass is too thin, making the Z2 Tablet sound like you're listening to music from a radio in the next room.

Sony says the Z2 Tablet is capable of eliminating environmental noises when making voice or video calls, but this feature is only available on the MDR-NC31EM sold separately for more than VND 1 million. 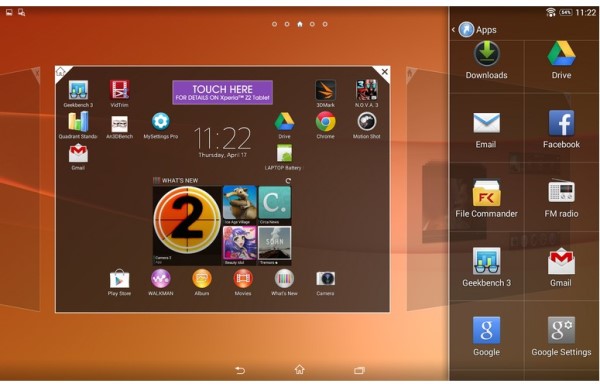 Xperia Z2 Tablet is installed Android 4.4.2 with Sony's customized interface. You can press and hold your hand on the Home screen, a menu will appear on the right that allows you to add apps, widgets or change the background, including many interesting animations.

Wi-Fi icons, battery percentage and clock are displayed in the upper right corner. When sliding from this corner down, you can access the full menu to customize connections, routing services and screen brightness. You can also customize this menu for quick access to Airplane, NFC and audio modes.

Slide your hand from left to right on the application screen will open a sub-menu that allows you to search for applications, delete or arrange applications according to the criteria: name (alphabetical order), most used or newly installed put. Below the screen is the link to Play Store and Sony Select. 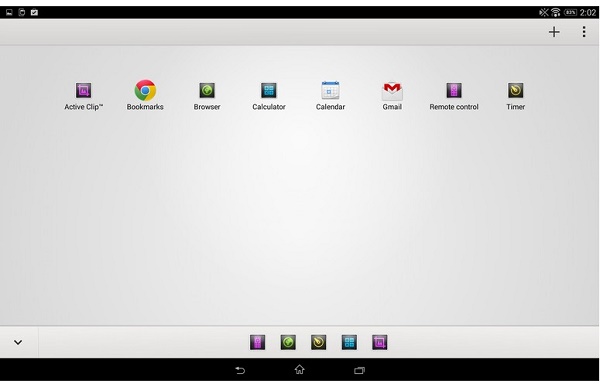 Small Apps toolbar is just above the navigation bar

Small Apps is Sony's answer to Samsung's multitasking feature. Small Apps applications will "float" on the top of the screen, helping to bring many additional features to the Z2 Tablet when you use other applications. You can resize and move Small Apps windows. If you drag them to the bottom, these windows will shrink back to the black tab bar at the bottom of the screen. 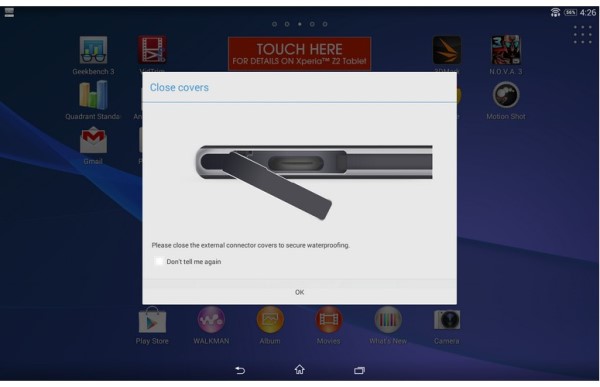 With the Snapdragon 801 processor and 3GB of RAM, the Xperia Z2 Tablet has enough power to play top games and run camera apps or watch HD movies smoothly. However, the benchmark test on Z2 didn't give a really stable result.

LaptopMag has edited video with Vidtrim on Z2. The ultra-thin tablet of Sony takes up to 5 minutes 49 seconds to convert a 1080p video of 203MB into 480p resolution. The Galaxy Note 10.1 only took 4 minutes 11 seconds to complete the test, while the market average was 11 minutes 59 seconds. 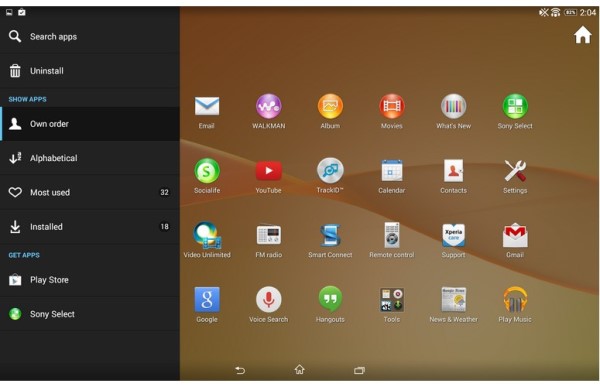 Like other Android products, Sony has equipped the Xperia Z2 Tablet with many self-developed applications. SocialLife application will aggregate news like Flipboard from news sites and from some social network sources, such as Facebook.

The Walkman application will play the music available on your Z2 Tablet, from the Music Unlimited service and even from devices stored on the same computer network. When connecting a storage device to a Wi-Fi network in use, this application automatically recognizes your music files. The Movies app for videos also has the same features as the Walkman application. The Album application allows you to view all the image files stored on memory, both on Picasa, Facebook and on network storage devices.

The PlayStation app on the Xperia Z2 Tablet allows you to connect to PS4 and PlayStation Network. Through this application, you can check in with your friends on PS Network and even buy and download games to your PS4. 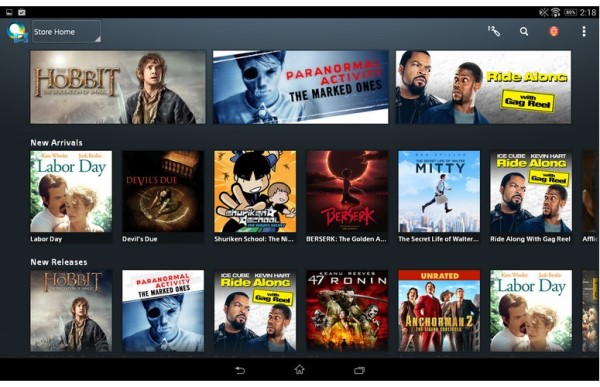 The Xperia Link app lets you turn your tablet into a Wi-Fi hotspot, but unfortunately this app only supports Xperia smartphone products. MobilSystems OfficeSuite7Pro office suite and some other applications such as Sony Reader, SmartConnect, Sketch … are also pre-installed on the Xperia Z2 Tablet.

Overall, Sony installed for Xperia Z2 Tablet a lot of applications. Unfortunately, selecting the application on Z2 is not as useful as the apps that Samsung provides for Note 10.1. Sure, the Note 10.1's optimized apps for stylus will help users work on Samsung's tablet better. 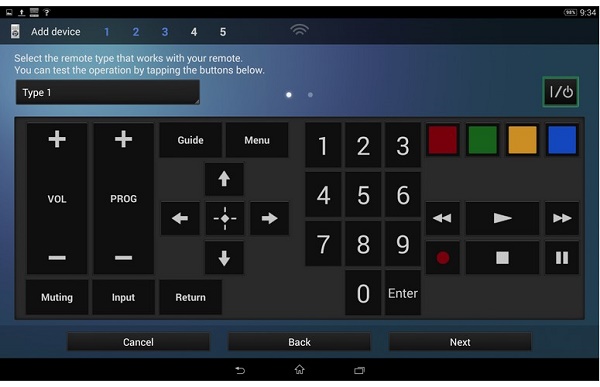 Like the first generation Tablet Z and the Galaxy Note 10.1, the Xperia Z2 Tablet has an infrared port that you can use to control home entertainment systems. With the remote control application, you can control Samsung and Sony TV models and also create complex macro commands to turn off all your devices at the same time. However, the device is still fully optimized as other remote control applications: you cannot assign different buttons to standalone devices, such as assigning volume control buttons to the speakers and assigning buttons transfer channel to TV.

In addition, you can also download the SideView app to watch TV channels and control on GraceNote's original reading interface.

Xperia Z2 Tablet uses the latest Wi-Fi standard 802.11ac. The tablet also supports popular Bluetooth and NFC connections. With NFC, you can share files and data with other devices, and can also stream digital music directly from the Z2 Tablet to NFC-enabled speakers. 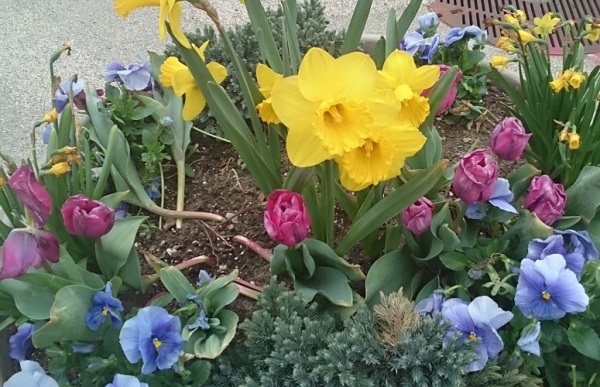 The close-up image is slightly pale

Photos taken with the back camera have good image quality, but not great. The photos in general have a slightly faded color phenomenon. HDR mode also does not help improve color quality in these cases, even the image still has blur and lost more detail. 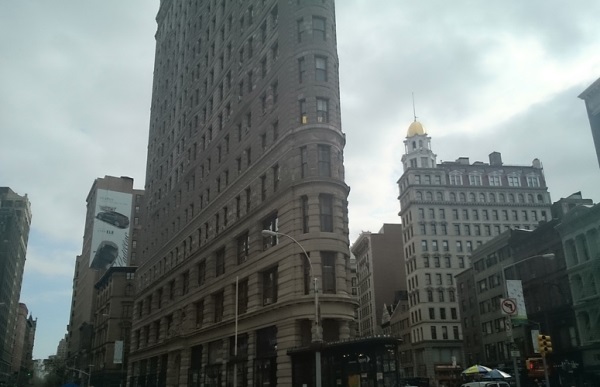 Photos with dark tones are even less attractive

The quality of video recorded with the rear camera is also not as good as expected: images with a bit of noise and less lifelike colors.

The Xperia Z2 Tablet's front camera gives color quite accurate. Despite the noise, the Z2's front camera is still more than enough for your video calls.

Sony has preinstalled 7 camera apps on the Xperia Z2 Tablet, and you can also download apps like Vine or Evernote.

– The port blocks are annoying.

– Speaker quality is not high. 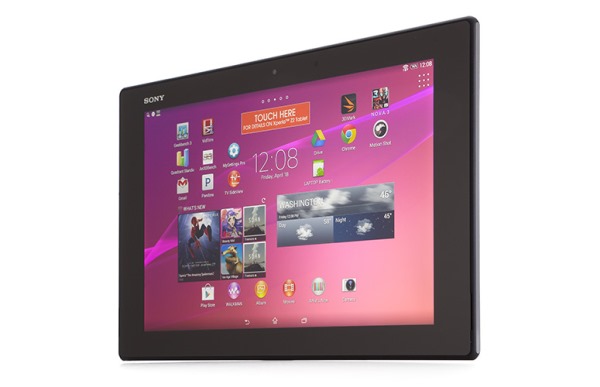 Products competing with the Xperia Z2 Tablet all have their own strengths that Sony products do not have. Galaxy Note 10.1 supports a stylus and many unique applications with multitasking capabilities that support very well for working users, while the iPad Air owns a huge iOS app store, including many support applications. High resolution Retina.

But if you need to choose a beautiful and durable Android tablet, the Xperia Z2 Tablet is the best choice for you. The slim and light body helps create a great hand-held feel, the bright and brilliant screen of the Z2 Tablet is in the "top" category on the current tablet market, the Z2's water resistance will also help you enjoy it comfortably. Digital content even when … bathing. With some insignificant weaknesses in speaker and camera quality, the Z2 Tablet deserves the No. 1 tablet option for Sony fans at this time.