At the end of 2019, Honda Vietnam has officially launched a new version of the Honda SH series of cars that many people expect when carrying a comprehensive change from appearance to equipment. Honda SH 2020 was officially presented in November 2019 and brought a lot of emotions to users in Vietnam in general and fans of this high-end scooter line in particular.

Since its launch, the Honda SH 2020 has caused a lot of aesthetic debate about this model compared to the previous version. Join us to find out and market the latest version of this model in the review, experience of Honda SH 2020 below.

First, in terms of parameters and overall design, Honda SH still retains the styling with tall, majestic lines creating a luxurious look. The Honda SH 2020 brings small changes in overall dimensions with the wheel shaft distance increased to 1,353mm, 13mm longer than the old version. Thus the car will be a little more school than the old version.

It can be seen that, in addition to keeping the basic design, the Honda SH 2020 carries on itself many changes in design lines. From the front of the vehicle, the entire LED headlight unit and navigation lights have been completely redesigned. This is also one of the most controversial features for this new model when many people judge it as not as beautiful and sophisticated by the “bird wing” design as before.

In the new version, the Honda SH 2020 staging unit looks larger than before when using the lamp design that is placed low below the mask and makes room for a more compact LED Daylight strip. This design gives the headgear a rather modern feel but is not as aesthetic as the previous generation of Honda SH.

In addition, a series of striking chrome details have been added to this head unit, making the car more polished and creating a pretty visual effect when traveling on the road. Therefore, the details on the new Honda SH 2020 will take time for users to get used to and adapt to it because aesthetic categories are always difficult to measure with many people.

Next, the outfit of the Honda SH 2020 has also been redesigned for more rounded details. This feature also makes the car become “weaker” than before when the cut lines are no longer available and this design feels quite similar to the Honda SH Mode for women.

Some embossed lines have been included in the overalls of Honda SH 2020 for a quite strange visual effect and this is another controversial point about the ugly and beautiful of this car.

Above, the design of a completely new dashboard is brought to SH 2020 with a very modern and beautiful image. The entire face of the watch was flattened before it was no longer divided as clearly as before.

Next, the body part of the Honda SH 2020 has also been redesigned with more embossed lines, the SH Logo is sunk into an arrow-shaped concave on the plastic frame. This detail was added by the manufacturer to increase the sportiness of the car but created too many details that many people rated “not beautiful”.

Going into details in the rear of the car, we can clearly see a silver chrome ring is included here. This is the detail we consider to be the worst on the Honda SH 2020. This part not only does not make the car more genuine but it also makes the viewer feel quite foolish and unreasonable.

The saddle of the Honda SH is still designed in a 2-storey form and has a new leather upholstery with more lines than before for smooth seating and good skid resistance for the occupants.

Thus, in appearance, the Honda SH 2020 does possess a lot of “bad” designs than its predecessor. However, the beauty of the car that exudes a modern and somewhat more grandeur than before will take time for users to get used to their eyes and accept it.

In the rear frame, Honda SH owns a set of fork tires that are no different from the previous version. It is still a sporty 16-inch alloy wheel with Nissin shackle and safety disc. In the 2020 version, Honda SH still owns the ABS safe version in both front and rear disc brakes.

Next, the most valuable change on the Honda SH 2020 is the full electronic watch set capable of connecting Bluetooth to smartphones via the My Honda + application. However, this application also just stops at backing up and monitoring the maintenance process of the car only.

Next, Honda has pleased the user to move the position of the fuel tank cap from the bottom of the seat to the front cover of the vehicle. This is a small change but very useful when we no longer have to perform too many operations to refuel and also help increase the volume of the trunk.

The set of locks and keys of Smart Key on the new generation Honda SH has a design that is not different from before. Additional buttons open gasoline cap conveniently.

Inside the modified trunk can accommodate 28 liters of luggage, a charging port for smart devices with a common USB plug, which Honda integrated into like many handy electric motorcycles. In addition, right next to that is a stand tray that is capable of leaving the phone in case of a very reasonable charger. 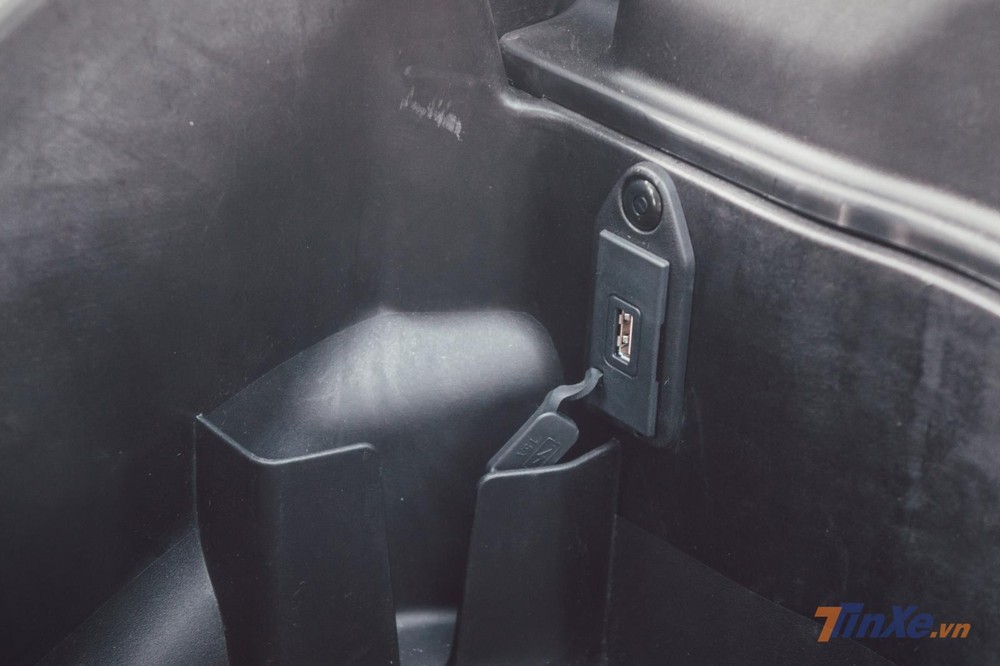 Thus, in addition to changes in appearance, the Honda SH 2020 carries on itself a lot of modern and more reasonable gadgets than the previous version for better and more thoughtful driver service.

Similar to the brother SH 125i, the SH150i has no difference in design and technology and is divided into two versions: CBS and ABS. Another point is that the car uses a single-cylinder eSP + engine, 156.9cc capacity, producing 14.4 horsepower and maximum torque of 13.9 Nm. This new engine block of Honda also owns hydraulic cam boost and modern HSTC torsion control system.

Through experience, this is a relatively improved engine block compared to the past when it has the ability to operate smoothly, lightly throttle and quite strong and reasonable fuel consumption of only about 2 liters / 100km for a 150cc vehicle.

Experience the luxury scooter in the street, we can see this car really “delicious” compared to many scooter models on the market today. Despite being quite tall and bulky, the Honda SH 2020 offers a comfortable and straight-forward riding position with flexible steering and headgear. This car moves quite cool in the city when owning light and sensitive gas.

Owning a large rim, large tires, the Honda SH 2020 is quite tall and compact when traveling in the city. With enough ground clearance used, the car up and down the sidewalk is quite stable and not scratched with sidewalks about 15cm high. Along with that, the forks on the car weighing more than 100kg is also very suitable for use with a variety of complex terrain on the streets of Vietnam.

With spacious legroom, drivers taller than 1m70 will be very comfortable to ride in this vehicle and fully capable of changing positions when driving long distances to avoid numbness. The plus point for the car that owns Idling Stop is that the ability to temporarily stop the engine on the Honda SH 2020 is very good, the time for stopping and restarting only takes a few seconds.

Quickly testing the ABS brakes on the Honda SH 2020, we were completely satisfied with the braking ability on this luxury scooter. The braking distance to the fixed point and the emergency braking are both very good results when the car does not slip too much, causing loss of control and balance.

So, with the Price of Honda SH The new version corresponds to SH125i and SH150i from VND 70,990,000 to VND 95,990,000 depending on the different versions of CBS and ABS brakes, this is a luxury scooter model to experience. Although there are many controversies about the appearance of this car, but really “better wood than good paint” should be a car for a good driving experience, with many equipped utilities for the driver should Honda SH 2020 Still very worthy of the price range.