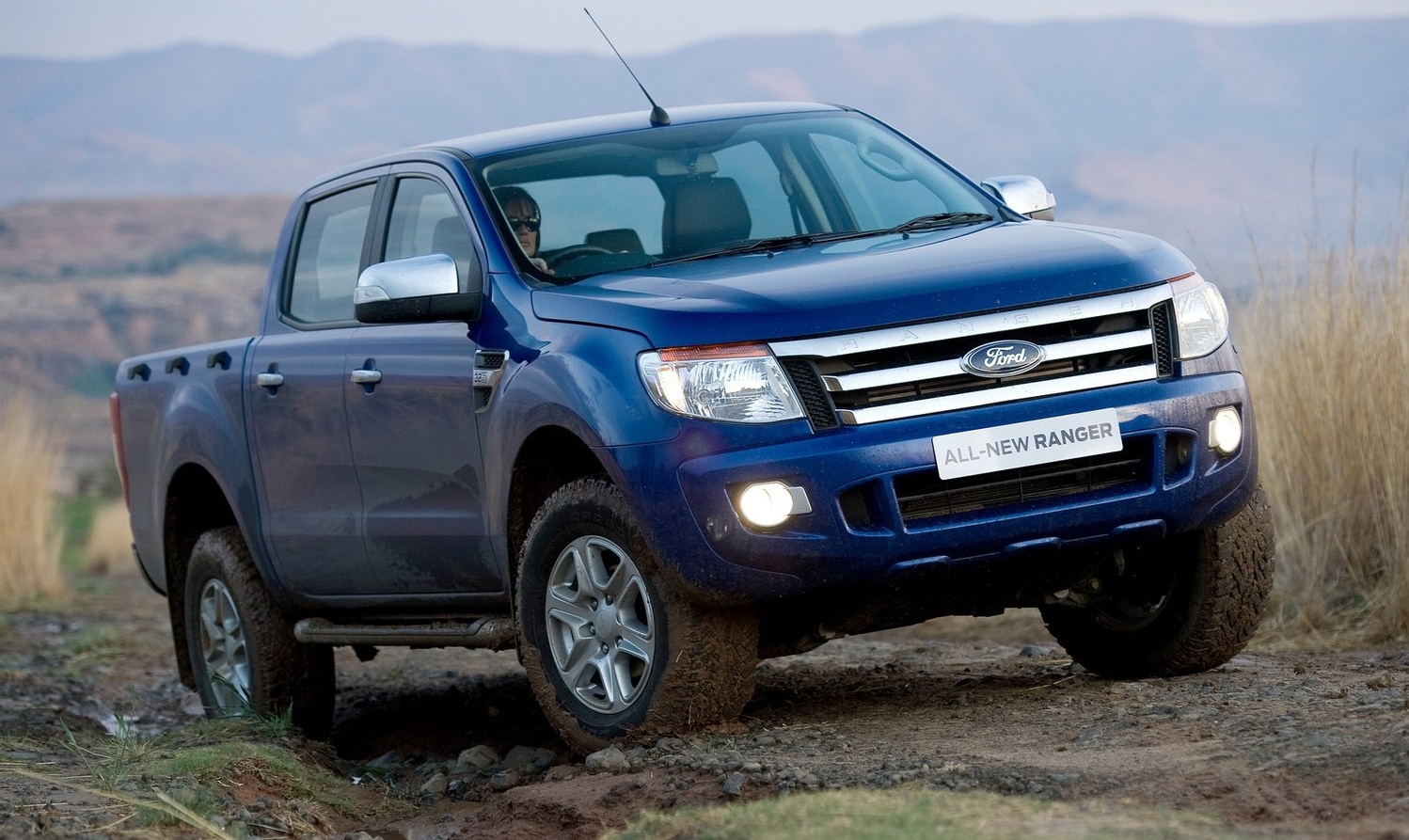 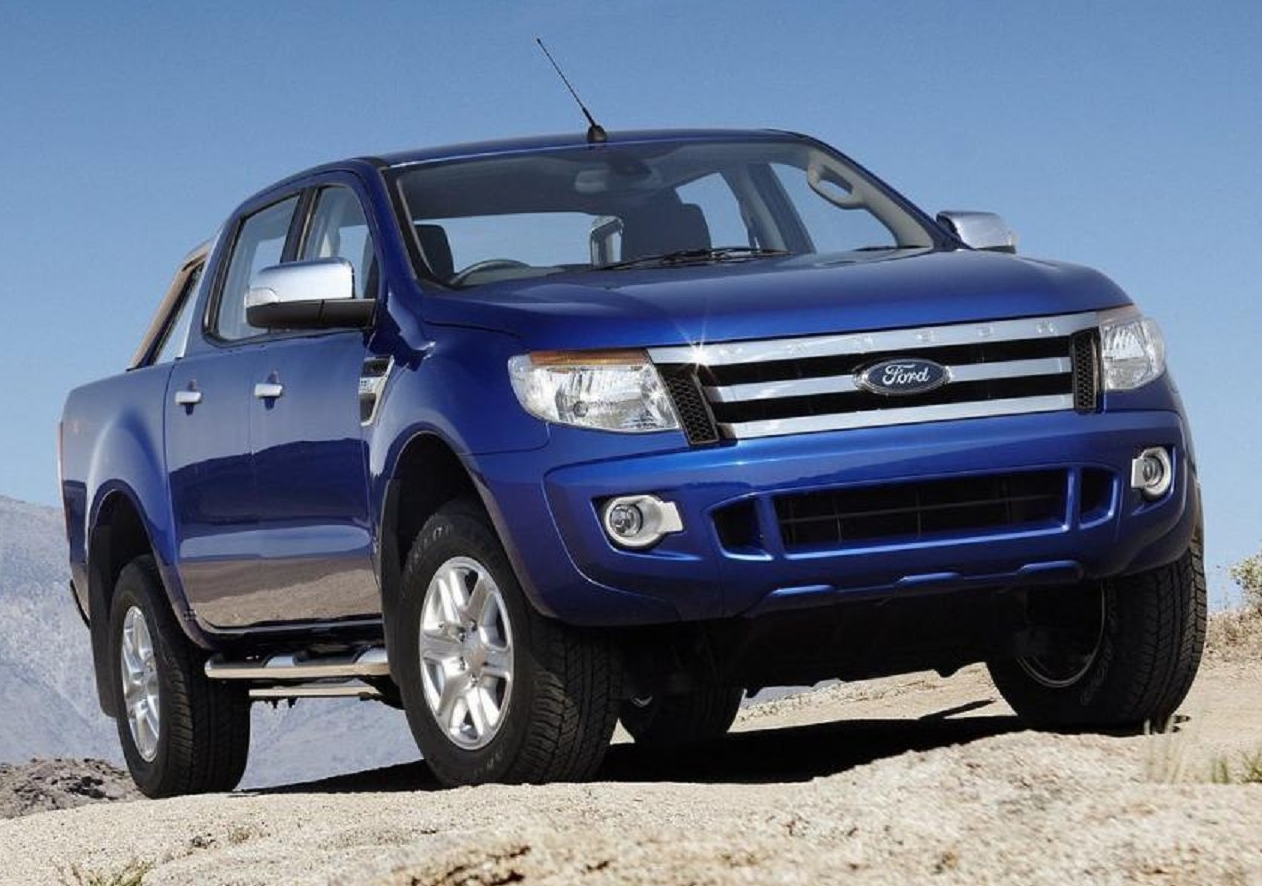 Ford Ranger was developed with two versions for the American market and for other countries around the world. In particular, the version for the Americas market was produced from 1983 to 2012 sold in markets in North America, Chile, Argentina and Brazil. However, due to the continuous decline in numbers, the company ended Ranger in 2009 to focus more on the famous F-Series. 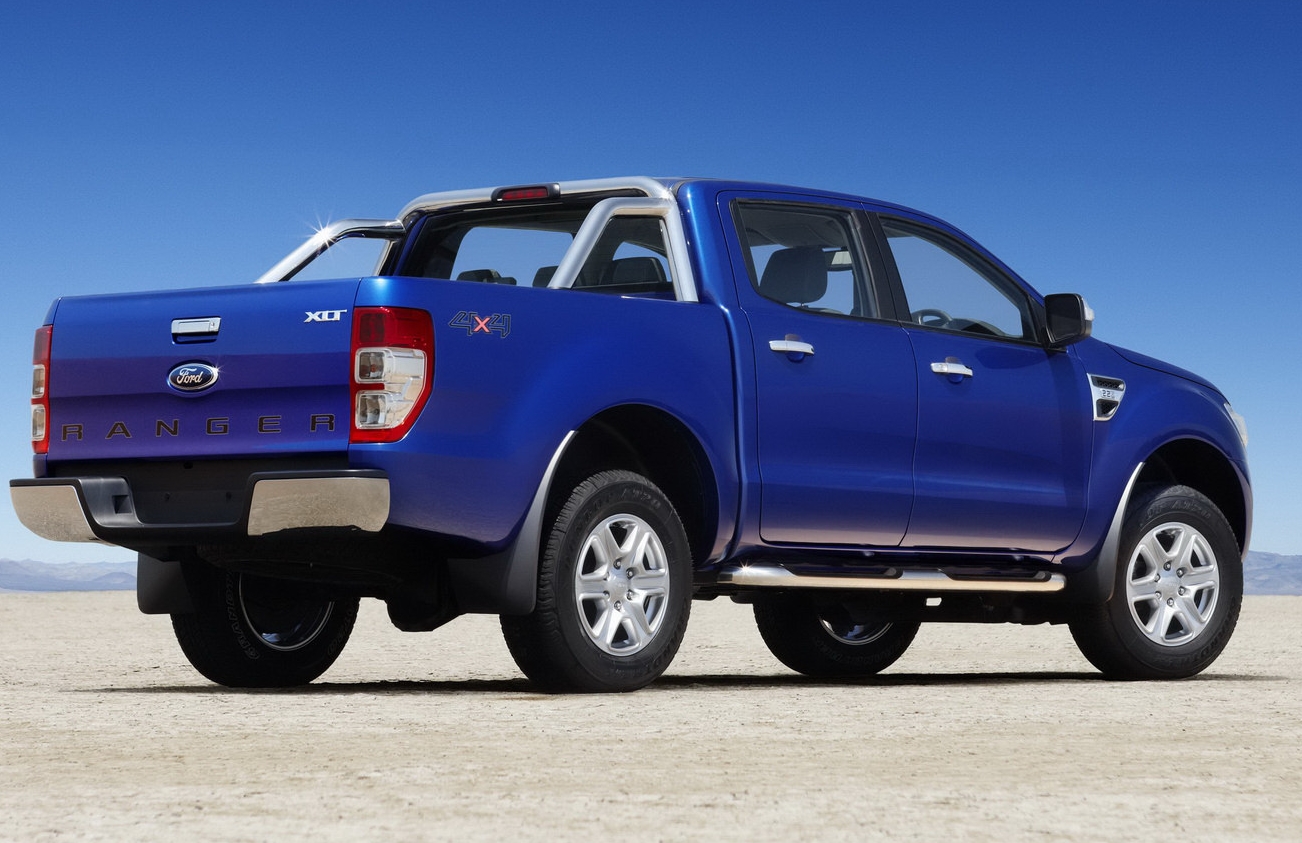 In Vietnam, the Ford Ranger first appeared in 1998 with three generations: 1998 – 2006, 2006 – 2011 and 2012 to date. The latest generation of Ranger “The All-New Ranger” has been delivered to customers since July 2012 and has achieved high sales when surpassing Toyota Hilux to occupy the position of dominating the pickup segment in the months. the begining of 2013.

Ranger is introduced to Vietnamese consumers with 6 versions of 2.2L diesel engine and optional rear or 2-wheel drive systems priced from VND 592 million to VND 766 million. Unlike other models, the car is imported CBU from Thailand.

See also: Ford Ranger models are now on the market. 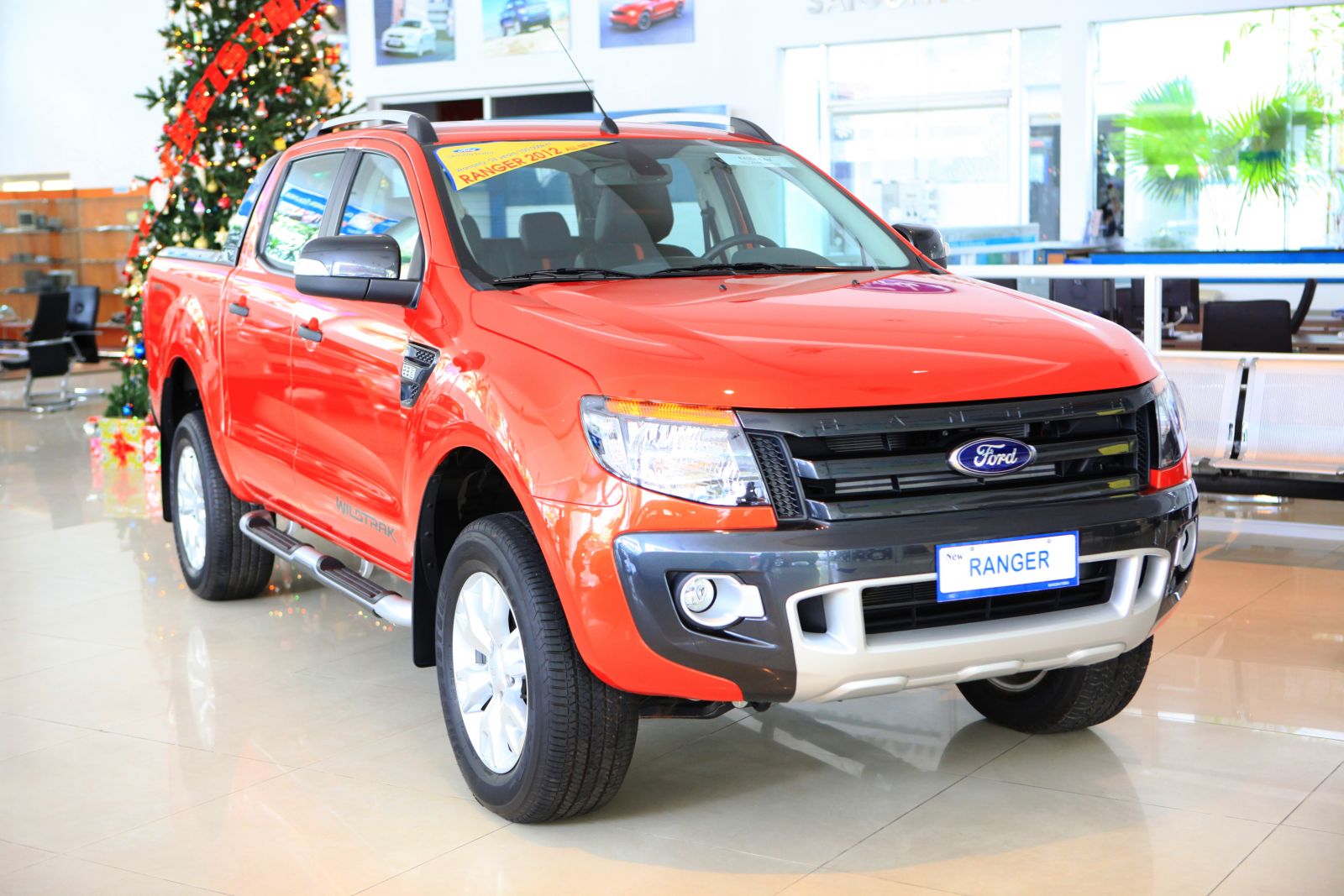 The success of the new generation Ford Ranger is largely contributed by the modern and convenient design of “street cars”. Removing the muscular edge of the traditional pickup and replacing it with solid curves makes the Ranger look more compact on the street but still very aggressive and powerful thanks to the front bumper and large grille. From the front, the Ranger looks like a tiger with fierce, wide-open eyes and pretty cool “eyelashes”.

Compared with Ranger 2010, Ranger 2012 has a wider capo. Shape of the car was rounded rounded, not square as before. Three large horizontal bars to create a strong masculine impression for the car. The front bumper has also been redesigned. Ranger 2012 has also moved the column B position to create more space for the rear passenger gloves. This means that the rear opening angle of about 80 degrees will help us get in and out easily. 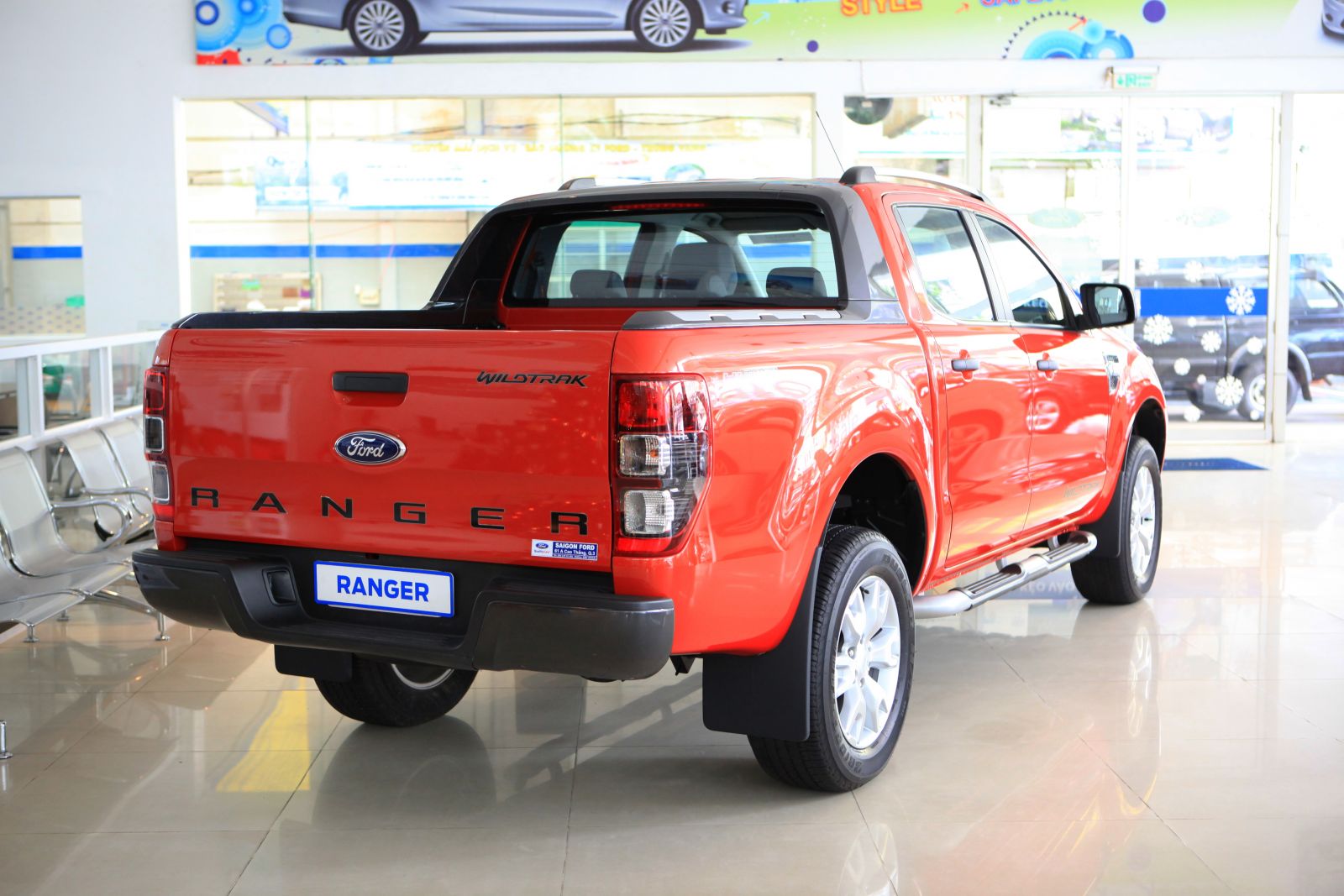 The gap between the container and car cabin in the new generation Ford Ranger is quite small, creating a seamless bodywork. The wide wheel cavity enough to please the doctor has “blood” Offroad. The design of the fish on both sides helps the car look more sporty along with large-sized rearview mirrors with handy turn signals. Cylindrical taillight cluster with eye-catching box block style. Plastic rear bumper also offers solid. Vehicles equipped with 3rd brake light overhead to help the following vehicles easily observed.

Ranger’s case has hooks for wire fastening. Another small detail is that the car has a 12V charging jack designed in the box for easy use for outdoor activities.

One detail worth mentioning is the size of the 2012 Ranger tires and wheels larger than before. This is explained so that the Ranger has a high position to easily observe the road surface, while the high chassis helps overcome obstacles better. Details of tire size and wheel are as follows:

When I first looked at the interior of the Ranger WildTrak, my first thought was: this is a sedan, not a pickup. And I can somewhat understand what Ford meant when he wanted to change the concept of the heavy-duty Ranger into a family car. Why can’t you drive the 2012 Ranger to a party? 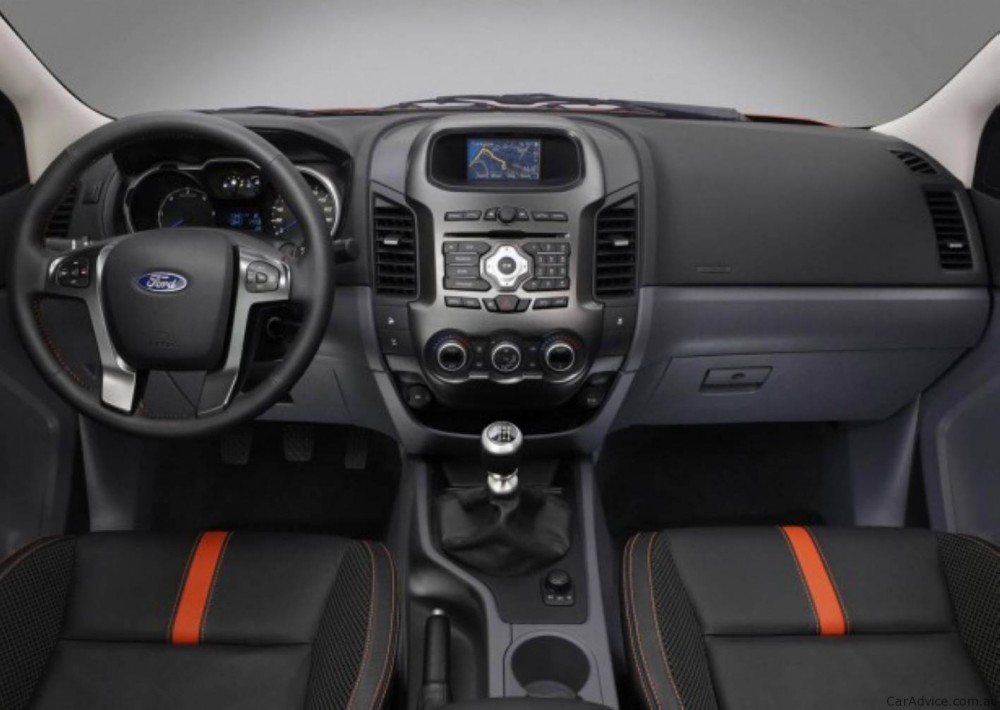 The interior space of the car is quite spacious with leg room and ceiling in all seat positions. However, the inherent disadvantage of the pickup is that the fairly upright rear seats will cause discomfort for people sitting in this position when moving long distances. 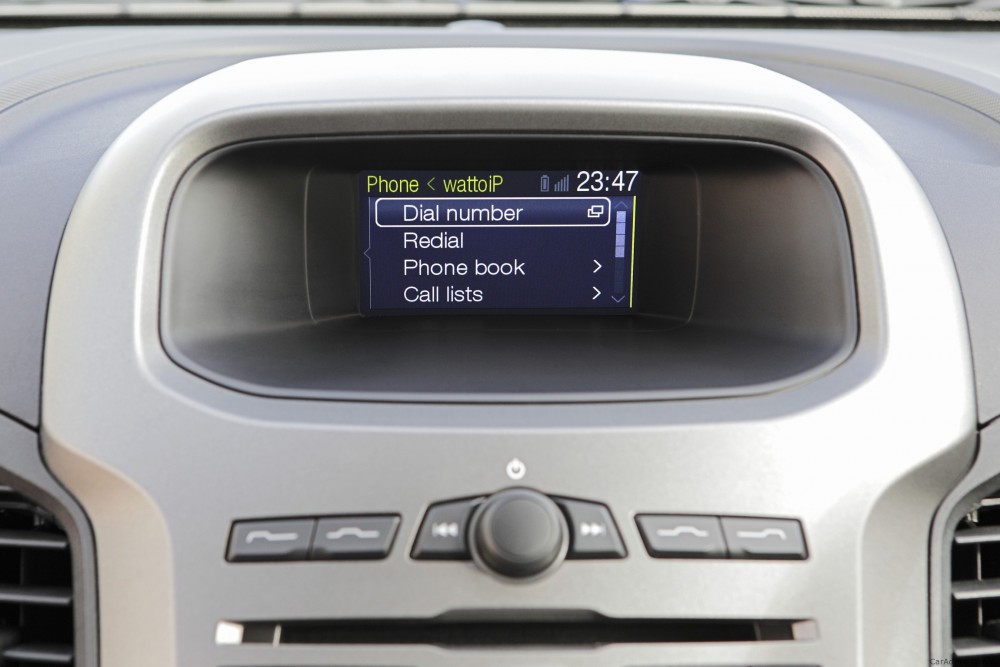 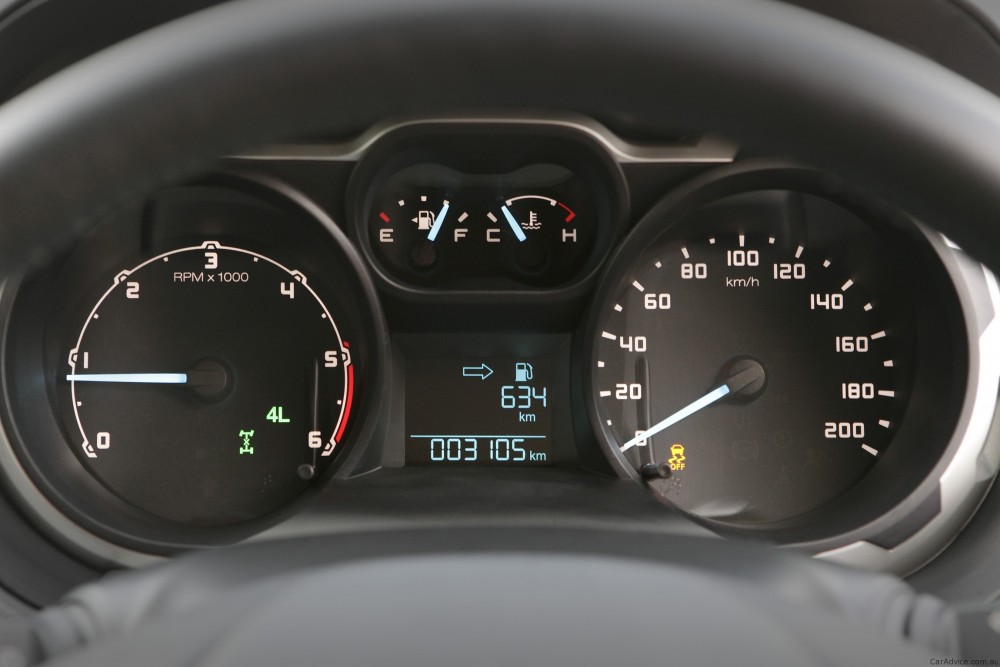 The Ranger steering wheel is now not only used to sound the horn, but also has many other functions such as voice control, audio control, cruise control, button to receive and receive a phone and there are also two levers on both sides. The steering wheel with functions that make people who ride are also confused.

The center console has a screen, an improvement over previous generations. The board has many functional buttons such as CD, Radio, Phone, air conditioner … within the reach of drivers and passengers. 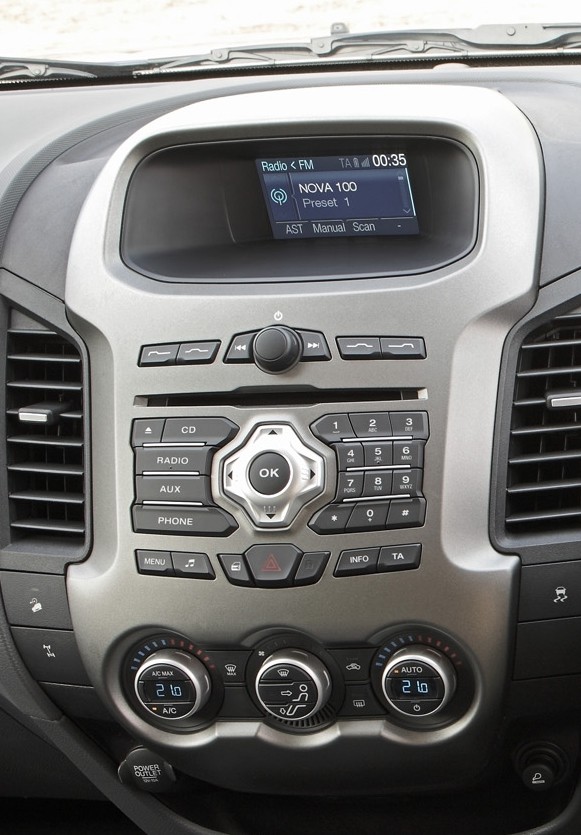 The audio system is nothing special with 6 speakers for Wildtrak and XLT versions and common functions like AM / FM, CD, MP3, iPod and USB

WildTrak has 2 temperature zones, which means that the side and the side will be able to adjust the temperature to suit you best. The remaining samples are air-conditioned.

It is not difficult to store sundries from laptops to phones, ipods, itineraries, drinks, though … because the car has more than 20 storage spaces.

Ranger WildTrak brings Bluetooth wireless connectivity technology and voice control. This means that you can fully receive and make calls with your hands still on the steering wheel -> helping drivers be safer on the road today, many people still have one hand to drive. In addition, you can also order the car to open the Radio, open the music in the Ipod, open the air conditioner … The inconvenience is that you have to order the machine in English. 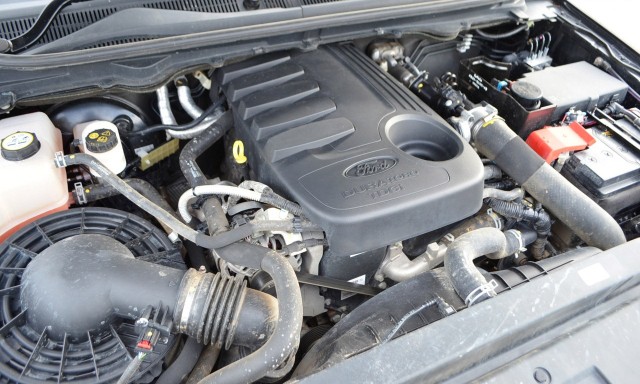 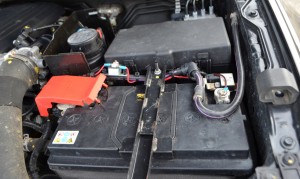 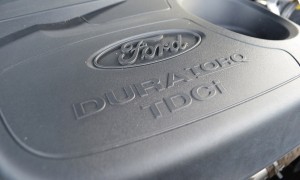 Looking at the table, we can see that the Ranger T6 Vietnam has only 2.2L diesel engine – the lowest of the three, the reason is that the writer is not sure, but it may be to meet the manufacturer’s fuel economy criteria. export.

When running at low speeds, the engine does not make much noise, but when we reach speeds of over 90 km / h, we only hear the engine noise entering the cabin. Especially when forced to accelerate quickly, the engine will produce noticeable noises.

Departing from Phu My Hung District Q7 along Nguyen Van Linh Boulevard towards Trung Luong Expressway, after passing the toll station, we meet a chance: Ong Lon Bridge, Ong Be Bridge, Ba Lon Bridge, Bridge Firewood Village, Rach Ngang Bridge, vertical incision … Thinking in my stomach, I blame myself for being black, because normally I used to ride a motorbike on this road, every time I went to the bridge, I slowed down but because of the high ridge and large incline so the car is often shocked, sometimes when carrying more people, please prepare the spirit of “hold on tight”, not a car flying somewhere, people flying a distance

But when Ranger WildTrak goes through those sections, it no longer bounces. I just thanked Ford for designing the high-underbody car with shock-absorbing suspension. Remember last year, going on the Phu Son Pass section, when the car was being repaired, the car drove only 30km / h to meet the pothole hit ‘Ram! is the back seat fly up to the roof.

The maximum speed of Ranger WildTrak 2.2L is 170km / h, however we only stop at 70-80km / h. The automatic throttle function and cruise setting are only tested on short distances.

Off-road capability and electronic bridging function have also not been tested. One of the reasons is that the Ranger WildTrak is a 4×2 single-wheel drive vehicle. 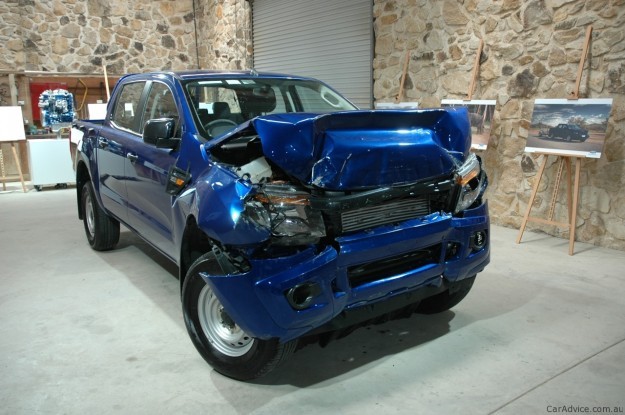 The 2012 Ford Ranger is highly rated for its safety with a 5 star rating of both Euro Ncap (the safety rating of new European cars) and Ancap (a government organization with the function of supervising check with automotive organizations in Australia and New Zealand) on crash safety tests. According to Euro NCap, the Ford Ranger is the first pickup in the segment to gain 5 stars. However, while the WildTrak 4×4 AT international Ranger has up to 6 airbags (2 front airbags for the driver and auxiliary side, 2 side curtain airbags for the driver and auxiliary side and 2 curtain airbags for the rear seat) Ranger WildTrak 4×2 AT of Vietnam only has 2 front airbags (for driver and side), Ranger XLS only has 1 airbag for driver, Ranger Base does not even have any airbags. 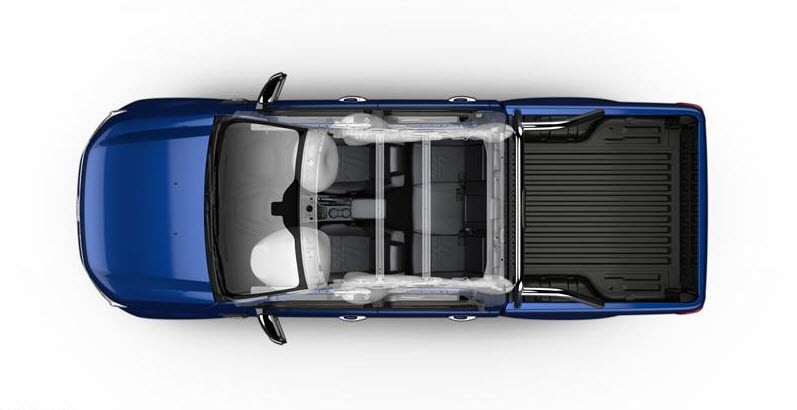 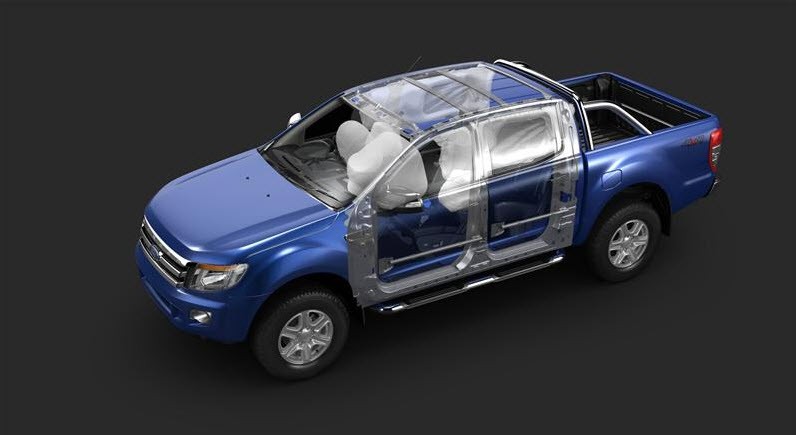 Ranger has a foldable rudder. This is a feature that helps drivers reduce injuries when a collision occurs.

Pros and cons of the Ford Ranger

The 2012 Ranger is for people with a personality, adventurous, want to find something different. Ford has created a very personal product for them.

If you’re an off-road fan, the Ranger is what you need.

After consulting with the entire evaluation team, we decided to evaluate the scale of Ford Ranger WildTrak 2012 4×2 AT models. was 3.8 / 5.

“We always try to make the most objective assessment possible. However, this is just a personal assessment of an evaluation team anyway. The voice of consumers is the evaluation. most accurately, if you’re using a Volkswagen Touareg, please share your opinion with everyone … “ 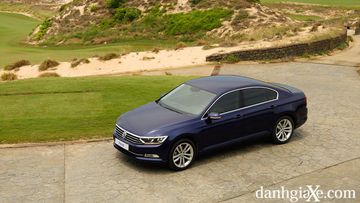 Preliminary assessment of the Volkswagen Passat 2020 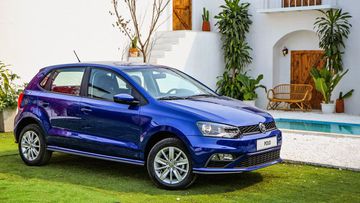 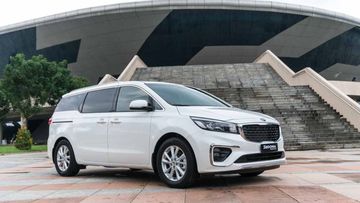 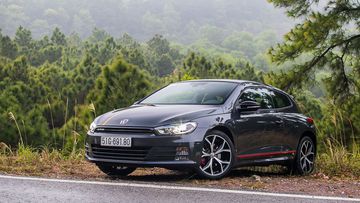 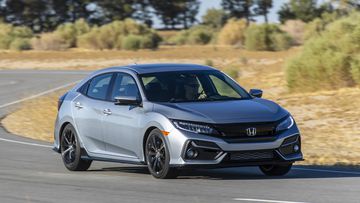 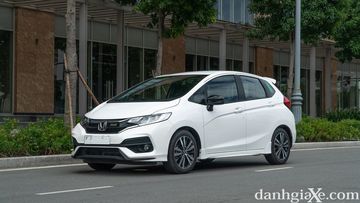 Preliminary assessment of the Honda Jazz 2020 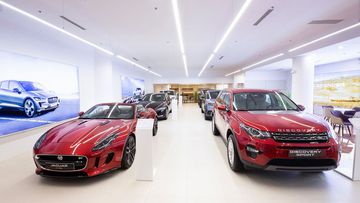 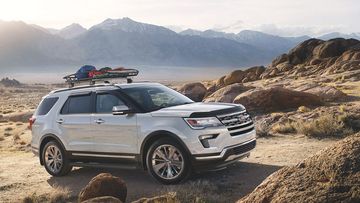 Ford Explorer is priced at only VND 1.99 billion in Vietnam 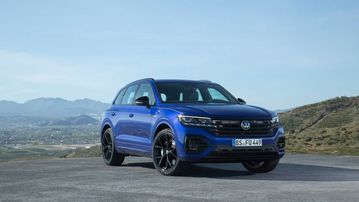 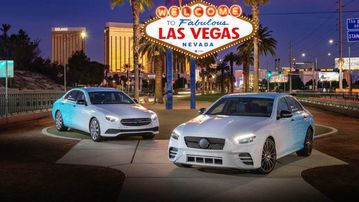 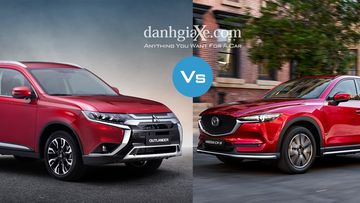 Post Views: 54 According to newly received information, Apple has started selling refurbished versions of the MacBook Air 2019 and 13-inch MacBook Pro Touch Bar in the United States through its online stores. It is known that both MacBook models on Apple were launched in June this year. In particular, the MacBook Air 2019 has […]

Post Views: 52 These free / discounted applications are only available for a short time, they are subject to change at any time without notice. In addition, some applications and games need to be converted to US / Japan / Australia / China to be eligible for the offer. Now you just need to register […]