With a neat, beautiful design and stable performance in the same price range as the "gift" called G-Sync Compatible, MSI Optix MAG271CR will be an option that gamers can hardly ignore.

In the world of shooter titles, where gaming screens like MSI Optix MAG271CR want to conquer, speed is what determines everything. The result of the match can be determined in a single moment. And no matter how you train yourself, but in the end, if your screen doesn't refresh fast enough, or your mouse sends a signal too slowly, you'll be the one to receive the bitter fruit.

That is the reason that not only professional people, a large number of gamers are also willing to invest in "good" screens to improve their capabilities. You don't need to know how to race to buy genuine cars, right? And when high-frequency scanning screens are becoming more popular and accessible, traditional 60Hz scanning frequencies are becoming "obsolete" like never before.

MSI Optix MAG271CR currently sells for about 9 million VND, and what you get, according to our experience, is well worth it. 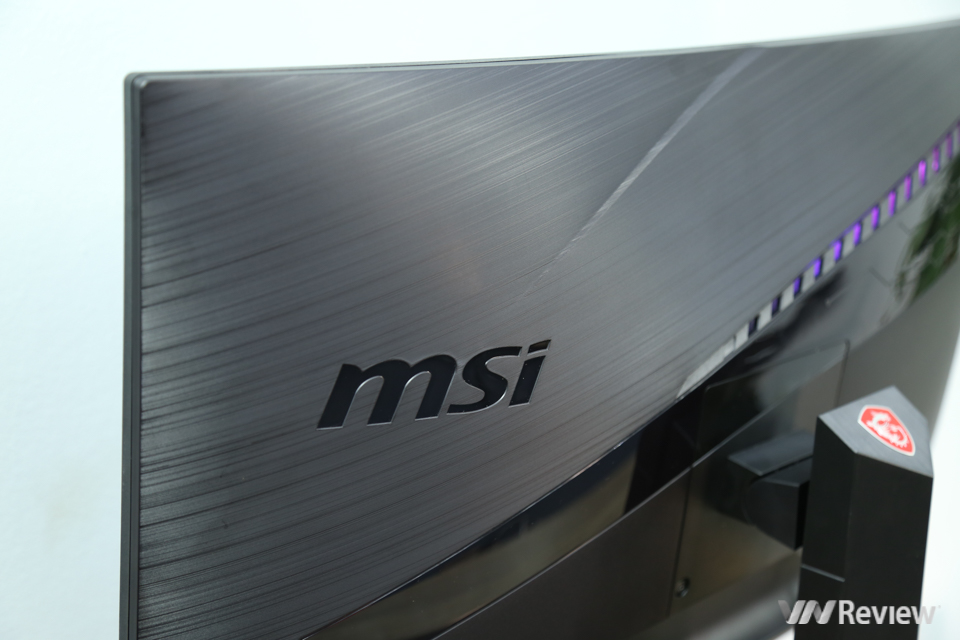 At first glance, the MSI Optix MAG271CR has a compact design but still exudes the quality of gamers. The scratched-back grain texture is refined, combining RGB LED strips to give a premium feel, which manufacturers need to bring in products in this price range. According to MSI, this LED strip is 16.8 million colors and can be synchronized with its other gaming products through the Mystic Light application. 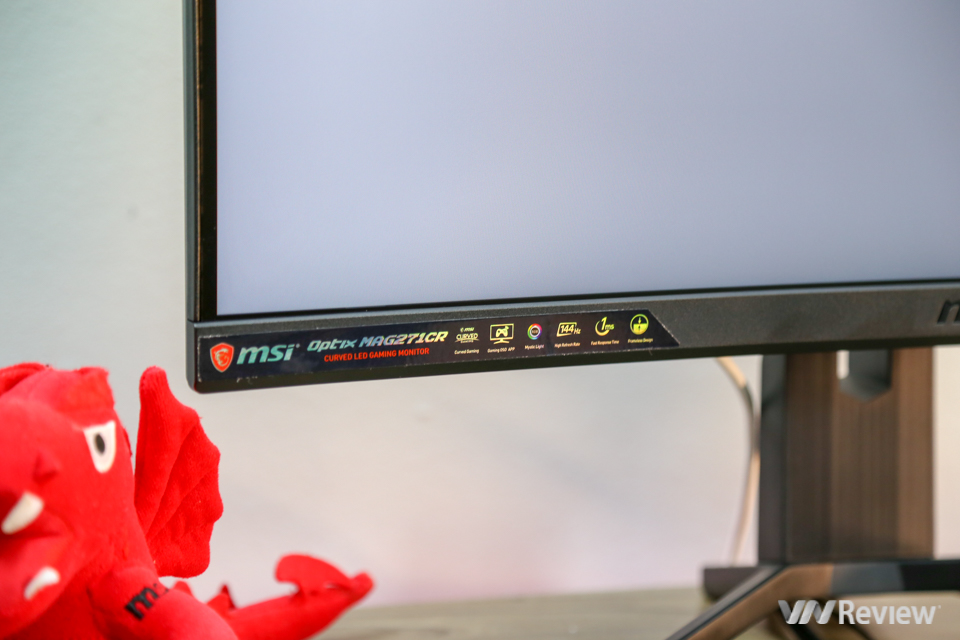 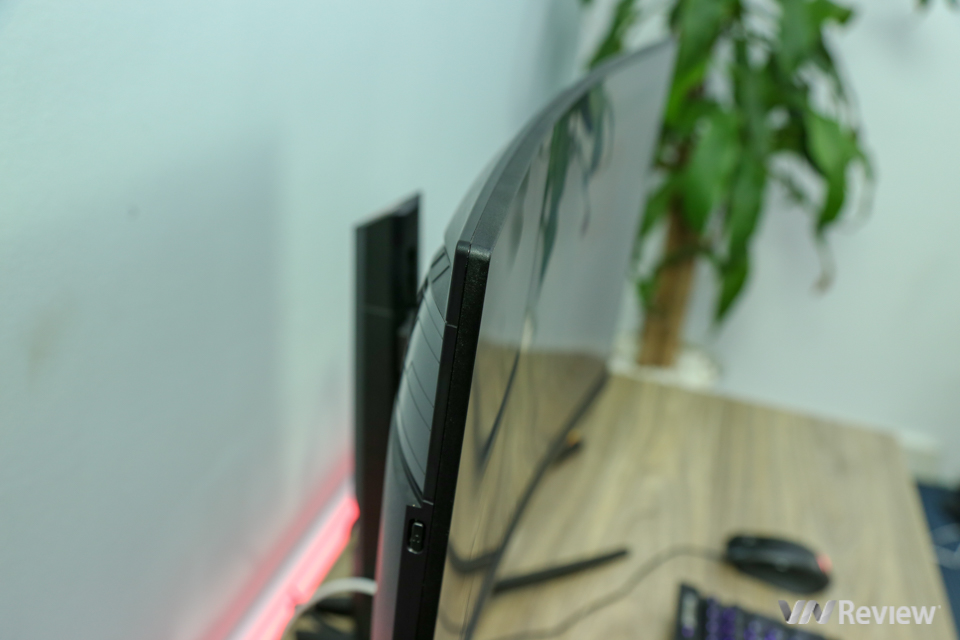 On the front, the MAG271CR impresses with its thin edges on both the top and sides, while the lower edge is slightly thicker due to the limitations of screen technology. The size of 27 inches in my opinion is best suited for needs, from work to entertainment, and curvature of 1800R (curved with a radius of 1.8 meters) is said to be optimal for a realistic viewing experience and range look comfortable. 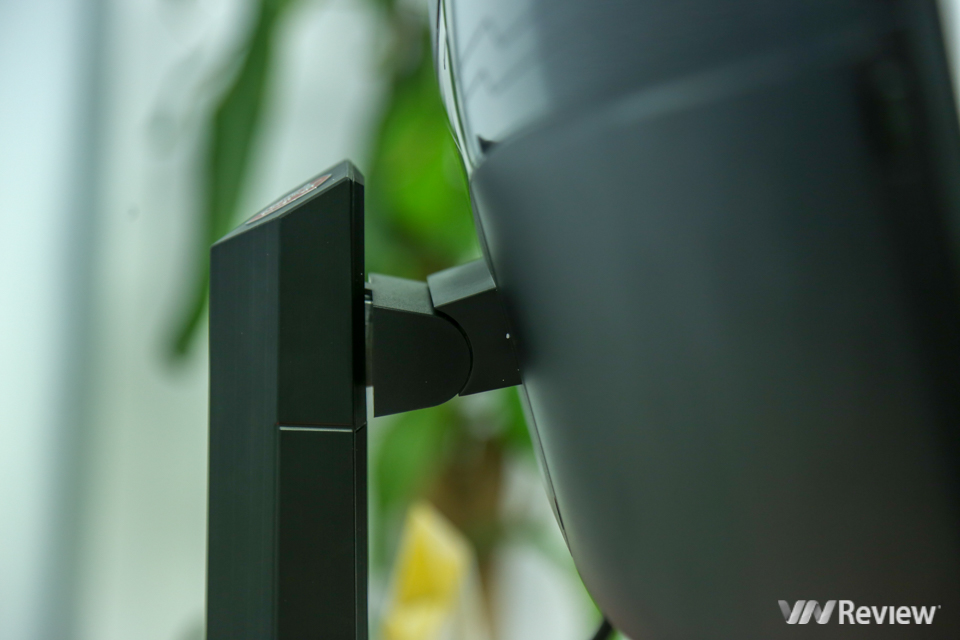 MAG271CR allows you to adjust the height and angle easily and smoothly, but does not support vertical rotation of the screen. Although a mistake is quite regrettable, but after all, this is still a screen for gamers, not for Photoshop or typing code. 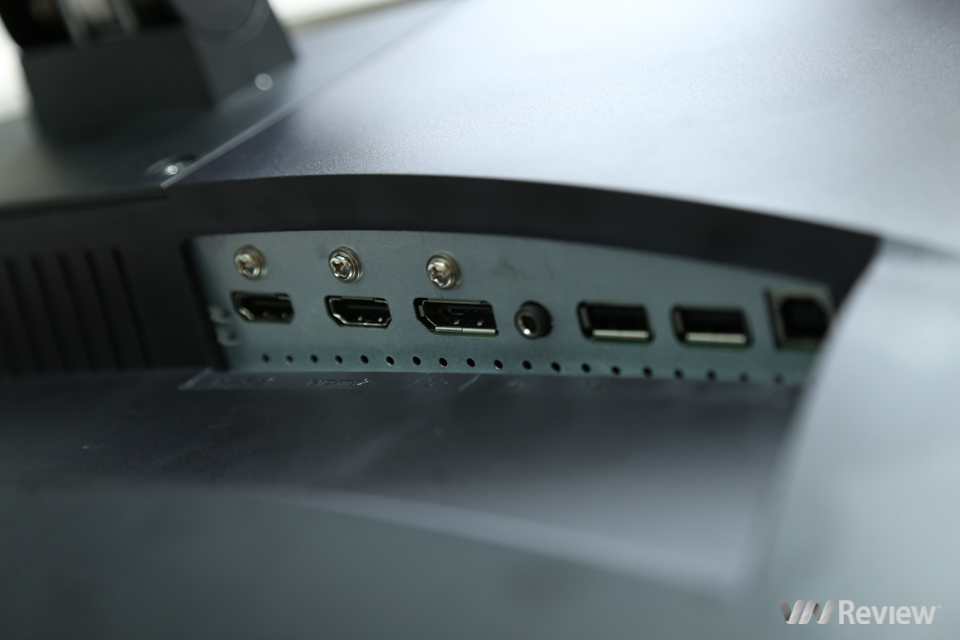 The connectors on MAG271CR are also very complete, with one DisplayPort port, two HDMI 1.4 ports, two USB 2.0 ports and one USB 2.0 type B port. Interestingly, MSI equips the monitor with a corner headphone jack. left, can be pushed inside the screen when not in use, very convenient. 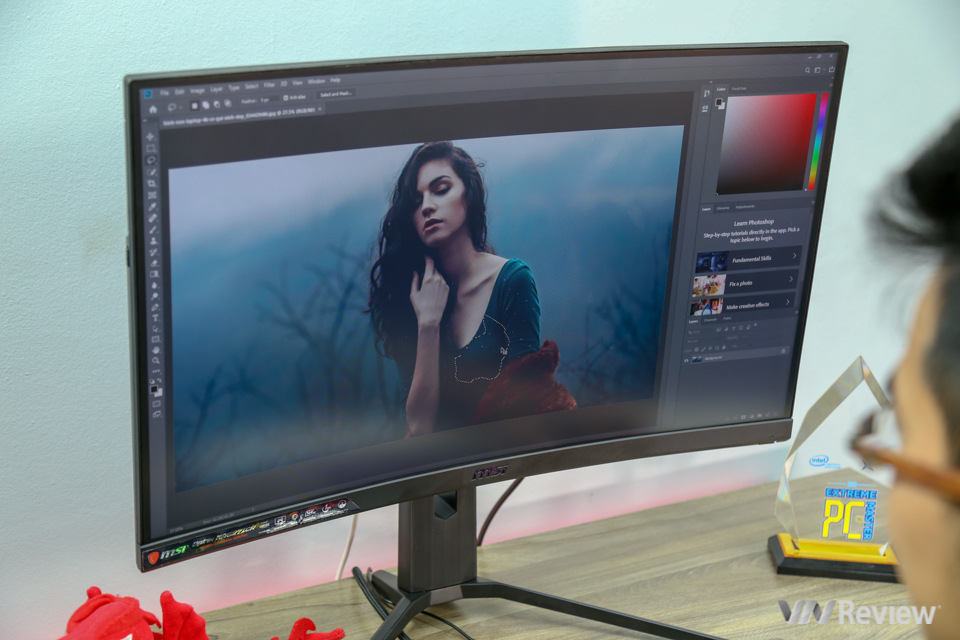 VA panel of the screen gives good display quality, with 3000: 1 contrast ratio, which is 3 times higher than normal IPS or TN panels. This makes images more vivid, more in depth.

Another notable key feature of MAG271CR is the wide color range, according to MSI is 90% DCI-P3 and "up to" 115% sRGB. What does this mean? That is, the color band of the screen goes beyond the standard sRGB commonly found on computers, giving a brighter, more brilliant color.

But since you cannot "turn off" this wide color range feature, the image displayed on MAG271CR will always be brighter and brighter than it actually is. Playing games, this will not be too influential, but there are times when you will want the display to be true, such as when editing a photo or video, or want to reduce the contrast, such as when reading a book or doing a job. office. Not that this screen is not usable in those cases, it's just not ideal. 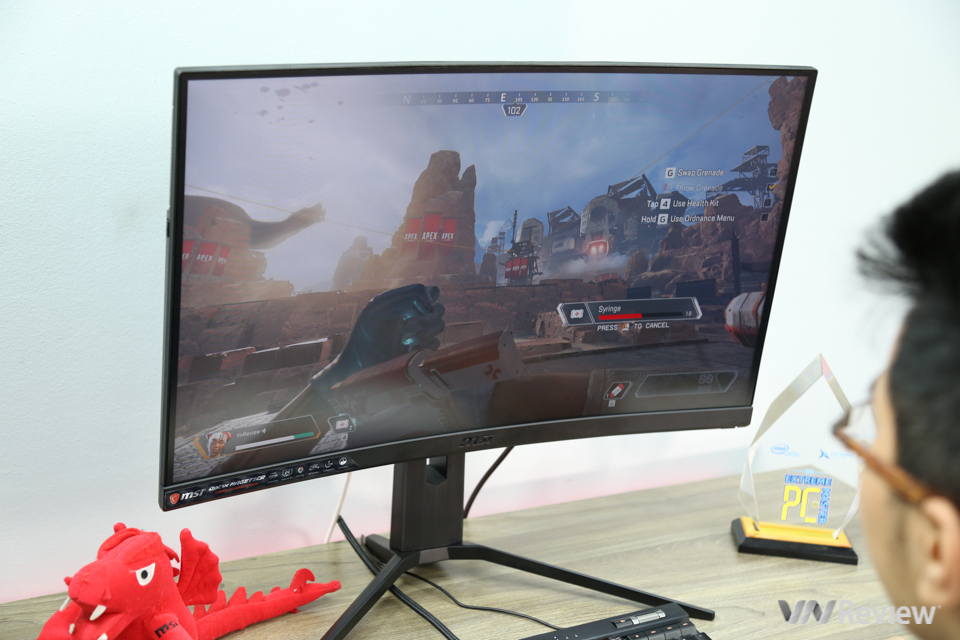 The 144Hz scan frequency, in my opinion, is something every gamer should aim for. From gaming to Windows tasks, it's all very smooth, noticeably better than the 60Hz screen (of course, if you have a computer powerful enough to do that). But considering that MAG271CR has a Full HD resolution, dragging the game frame rate to 144FPS is not too difficult. Nvidia's GTX 1070 graphics card is enough for you to enjoy the majority of today's massive titles.

In the tests of "ghosting" when the image moves fast, MAG271CR still performs quite well despite the response speed of 4ms. The ghosting phenomenon is true, most clearly seen in red, but difficult to recognize when playing games.

If you really need 1ms feedback speed as TN panel, MSI also has a dimming technology by turning the backlight off with each frame, making users feel like the feedback speed is higher. . MSI's technology is really effective, as evidenced by the fact that the ghosting situation is almost gone. However, the minus point is that the screen brightness will drop from 300 nits to about 70 nits, only suitable for use in a dark room.

One of the most notable highlights of the product is that MSI has integrated "G-Sync Compatible" technology on its gaming monitors, including MAG271CR. With 417.71 drivers released in January this year, NVIDIA now allows G-Sync to be used on some screens that support "FreeSync" technology when they are connected to NVIDIA graphics cards. 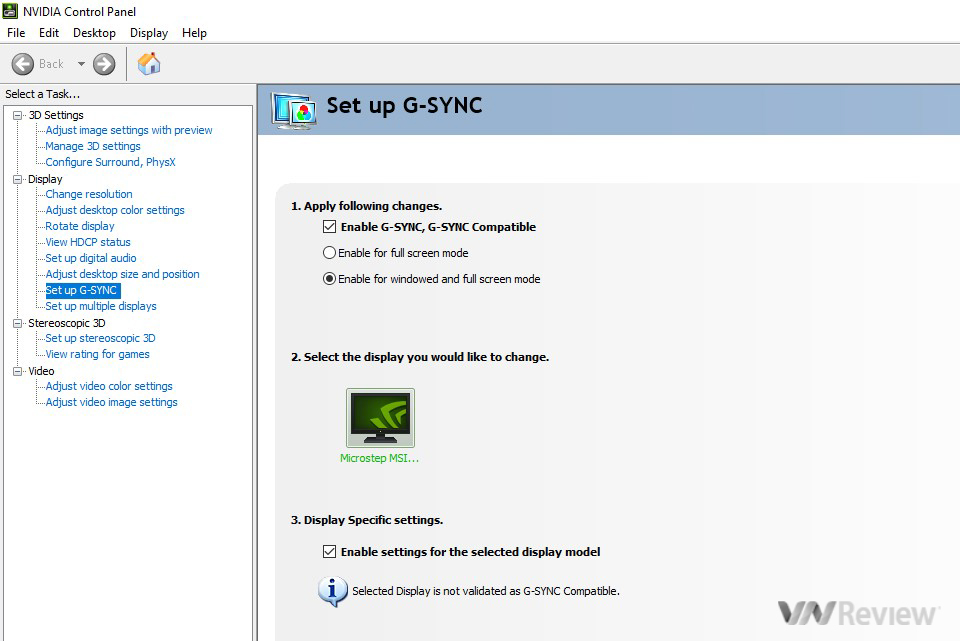 Set up the G-Sync Compatible in the NVIDIA Control Panel

G-Sync, in a nutshell, is the frame synchronization solution with the screen refresh rate developed by NVIDIA with many advantages over traditional V-Sync. This technology eliminates screen tearing but does not lag or lag like V-Sync. MAG271CR has AMD's FreeSync (or Adaptive Sync) support, but requires AMD's graphics card, while NVIDIA's market share is still overwhelming.

However, in order to enable G-Sync Compatible, you must meet some criteria such as using a Pascal Series 10 graphics card or running Windows 10 x64 and having to connect to your computer via a DisplayPort v1.2 port. (mini Display Port is also acceptable). 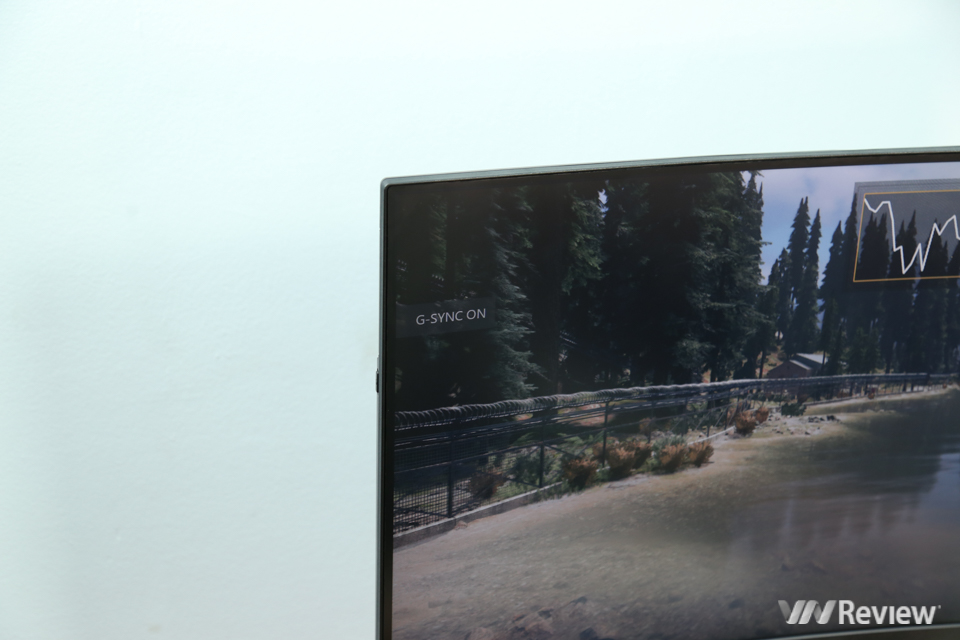 Signs that G-Sync has been activated

Quick testing with GTX 1080 graphics card, VnReview was able to successfully activate G-Sync on the MAG271CR easily, as evidenced by the "G-Sync On" in the corner of the screen when playing games. G-Sync is especially useful when you play a game with high-speed motion pictures such as first-person shooting or third-party viewing that FPS is not equal to the screen scanning frequency, and experience can say "a heavenly one" compared to V-Sync.

MAG271CR's biggest and most obvious weakness is its resolution. At 27 inches, 2K (2560 * 1440 pixels) resolution will be more suitable, while Full HD makes images look "pitting", more or less depending on the distance of the user to the screen when using. 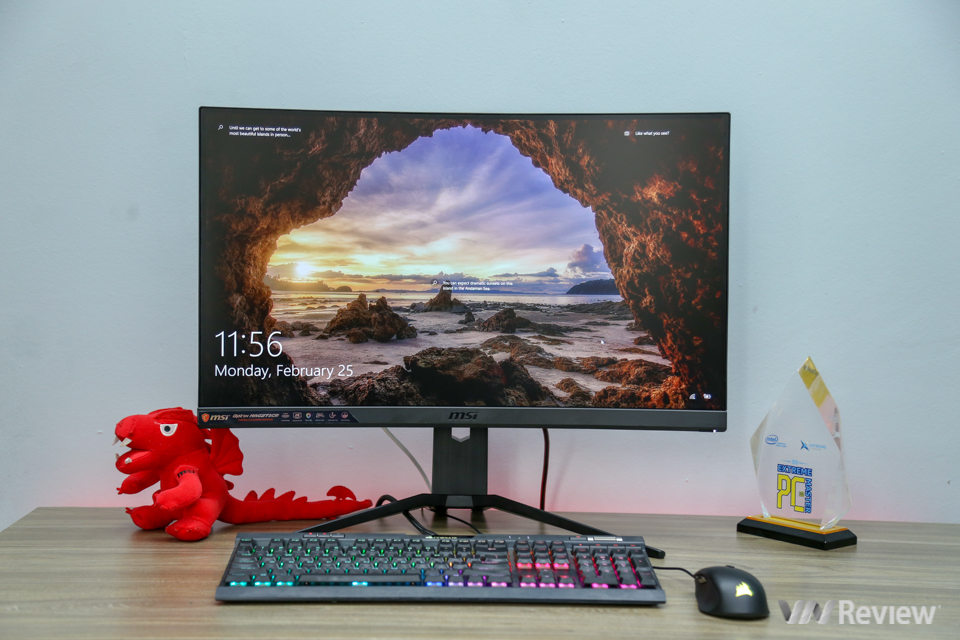 Through what is shown, MSI Optix MAG271CR is a worth considering product. With many bright points such as beautifully designed, 144Hz high-frequency scanning, VA panel for good display quality and complementary price of the G-Sync Compatible price, competitors can compete with this monitor in the price range. is not much. If the Full HD resolution on a 27-inch screen is not a problem, then you basically have no reason not to choose the Optix MAG271CR.

+ Supports both Adaptive Sync and G-Sync

– The resolution is only Full HD

– The response time is still quite slow

All information about smartwatch Amazfit Bip S has just been released

Post Views: 101 Amazfit Bip is one of Huawei & # 039; s most popular smartwatches – its subsidiary Xiaomi and now has a successor called Amazfit Bip S. Announced at CES 2020, Huami & # 039; s new smartwatch carries a lot of improvements over its predecessor with better connectivity and new features. Thiết […]

Post Views: 43 The car is painted red all over and inspired by the 1950s Chevrolet Corvette sports car. The Pacific Motorcycle Co. in New Zealand attracted attention with the 1974 CB350 called “The Red Rocker” with the idea of ​​the car owner. Before the large number of CB350 style cafe racer models over the […]

Post Views: 118 Perhaps Supreme is a name that is no stranger to young people today. This fashion brand was founded in New York City in 1994. Initially the product was primarily aimed at young people like skateboards, hip hop clothes. In Vietnam, the Supreme brand is loved by many young people and often appears […]