There is no "pitiful" appearance like most gaming laptops on the market today, Lenovo Legion Y730 chooses a proper style of "serious youth" with the same appearance as a business laptop or mobile workstation. .

Legion Y730 is Lenovo's gaming laptop model that has just been sold in Vietnam earlier this year. The product marks Lenovo's transformation in gaming laptops when there is a complete innovation in design compared to previous generations. Instead of the familiar pit style on gaming computers, the Y730 looks "more serious" and bears the familiar features of dedicated laptops for work.

At a price of about 38 million, Legion Y730 sold in Vietnam will have a configuration including: 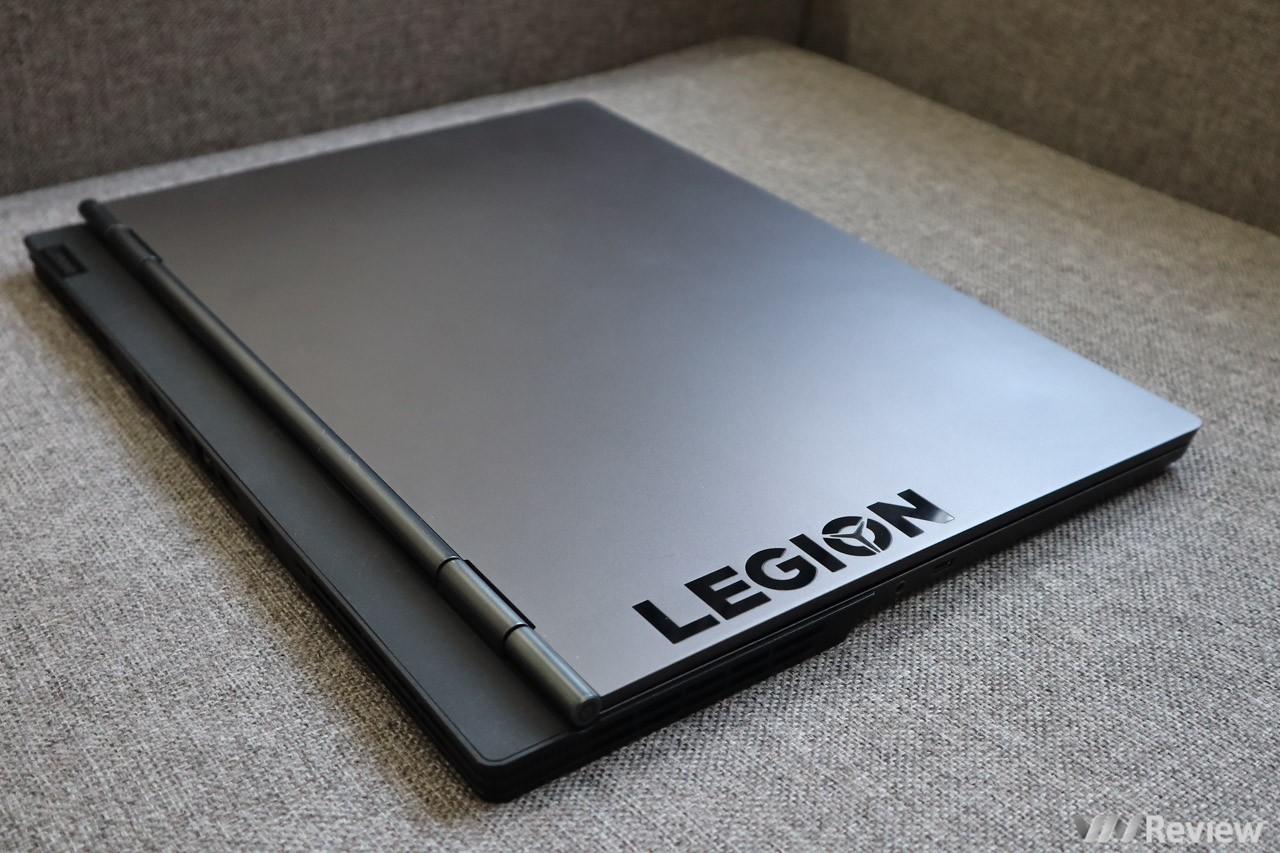 The slim, light, neat and simple style towards the "hidden" gamers is the main highlight in the appearance of this laptop model. At first glance, the Y730 has very close touches to the laptops in the form of workstations thanks to the square beveled lines, the tail is extended to the back. The lid is almost empty, with only the Legion logo neatly placed on the side. 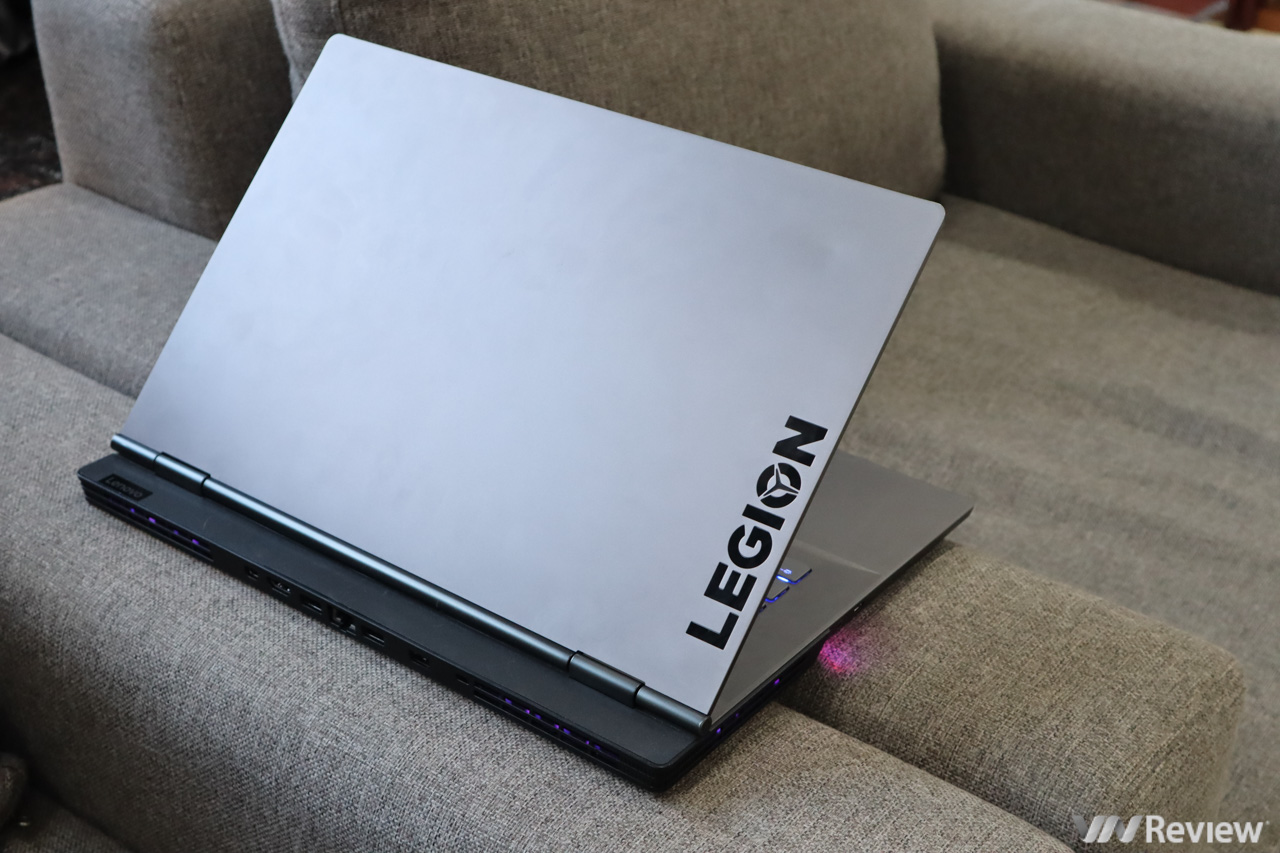 According to Lenovo, they want their Legion gaming laptops to serve both office, business or casual users. Therefore, the Legion Y730 doesn't look as sophisticated as the traditional gaming laptops.

Even so, when needed, the Legion Y730 can still "show up" if you want with a high-brightness, multi-color RGB backlight keyboard. Even, the LED system is also arranged in both the heat sinks on the side, the rear side or the Legion logo on the lid. 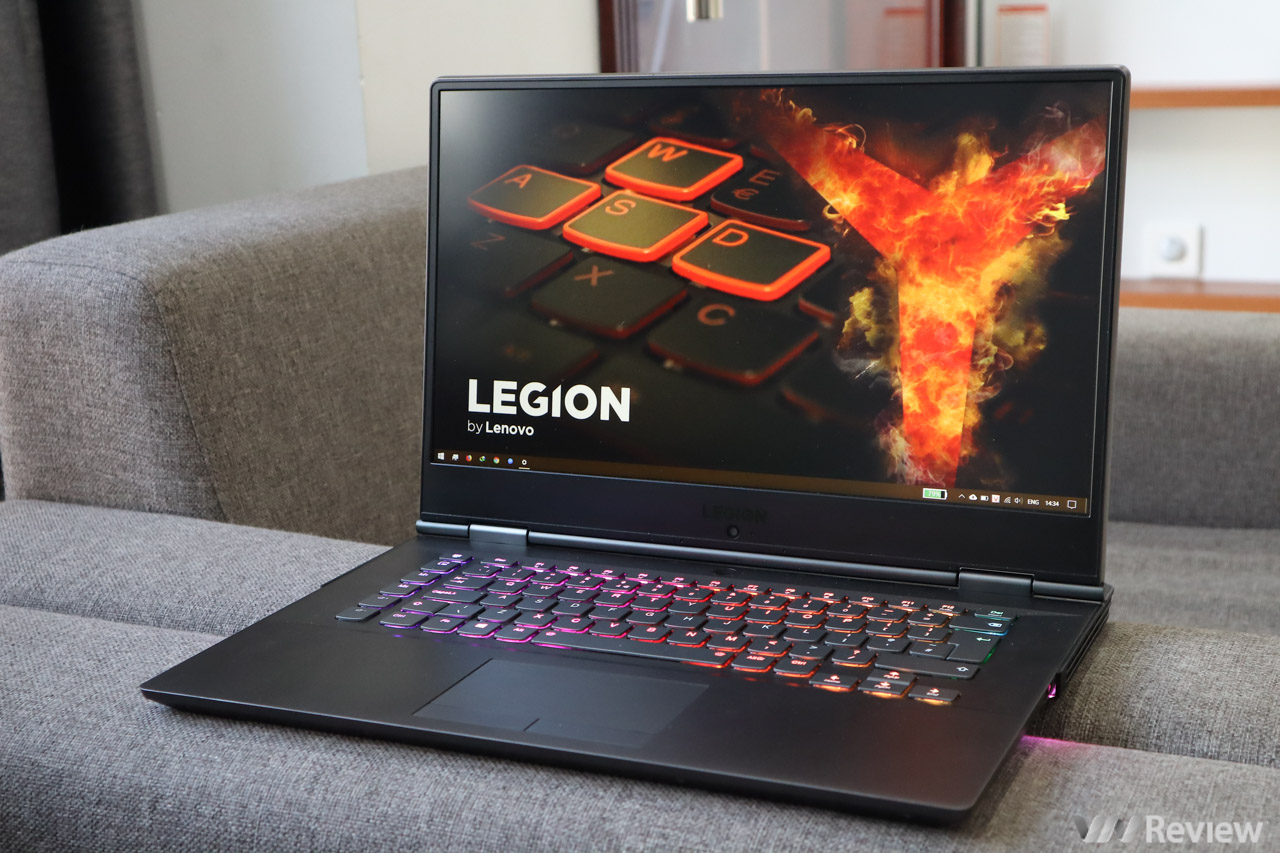 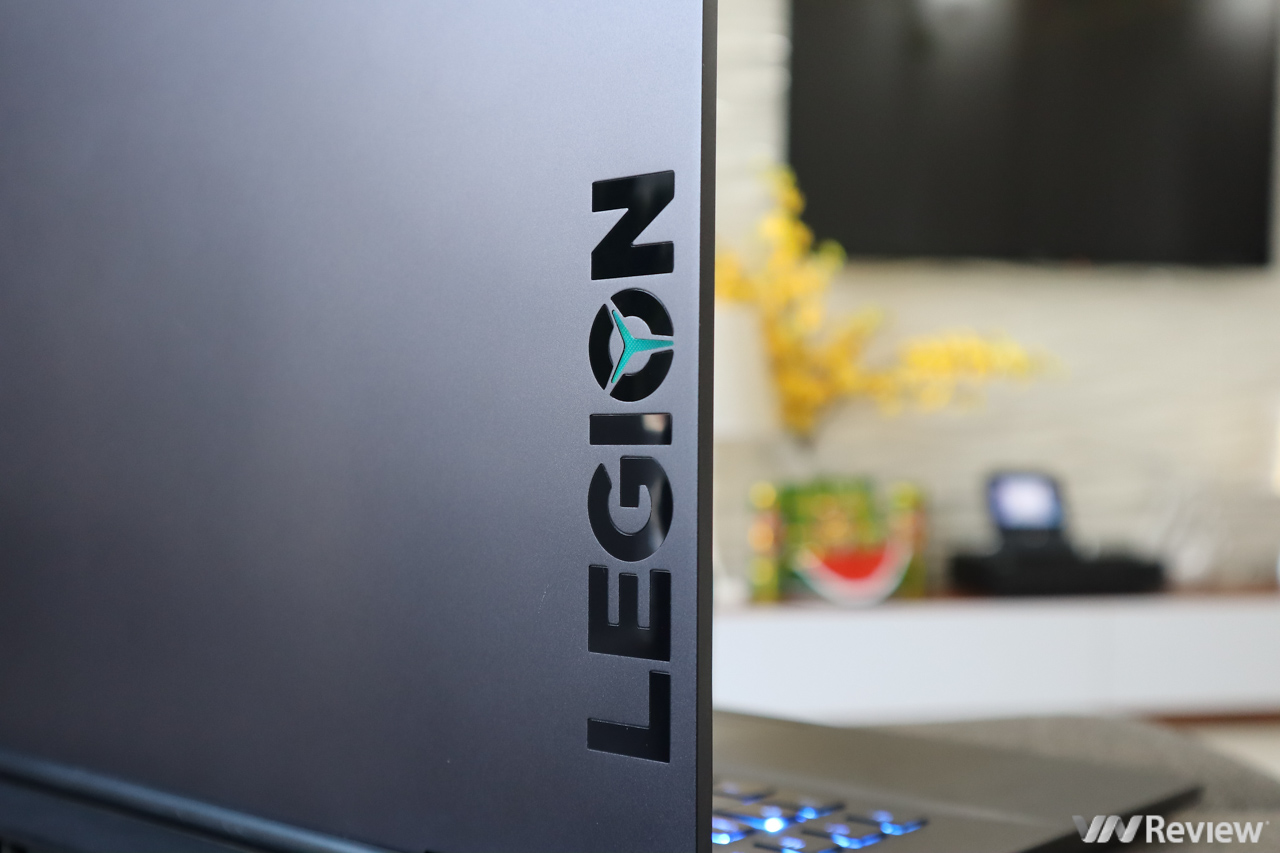 RGB LEDs are arranged in the logo on the lid 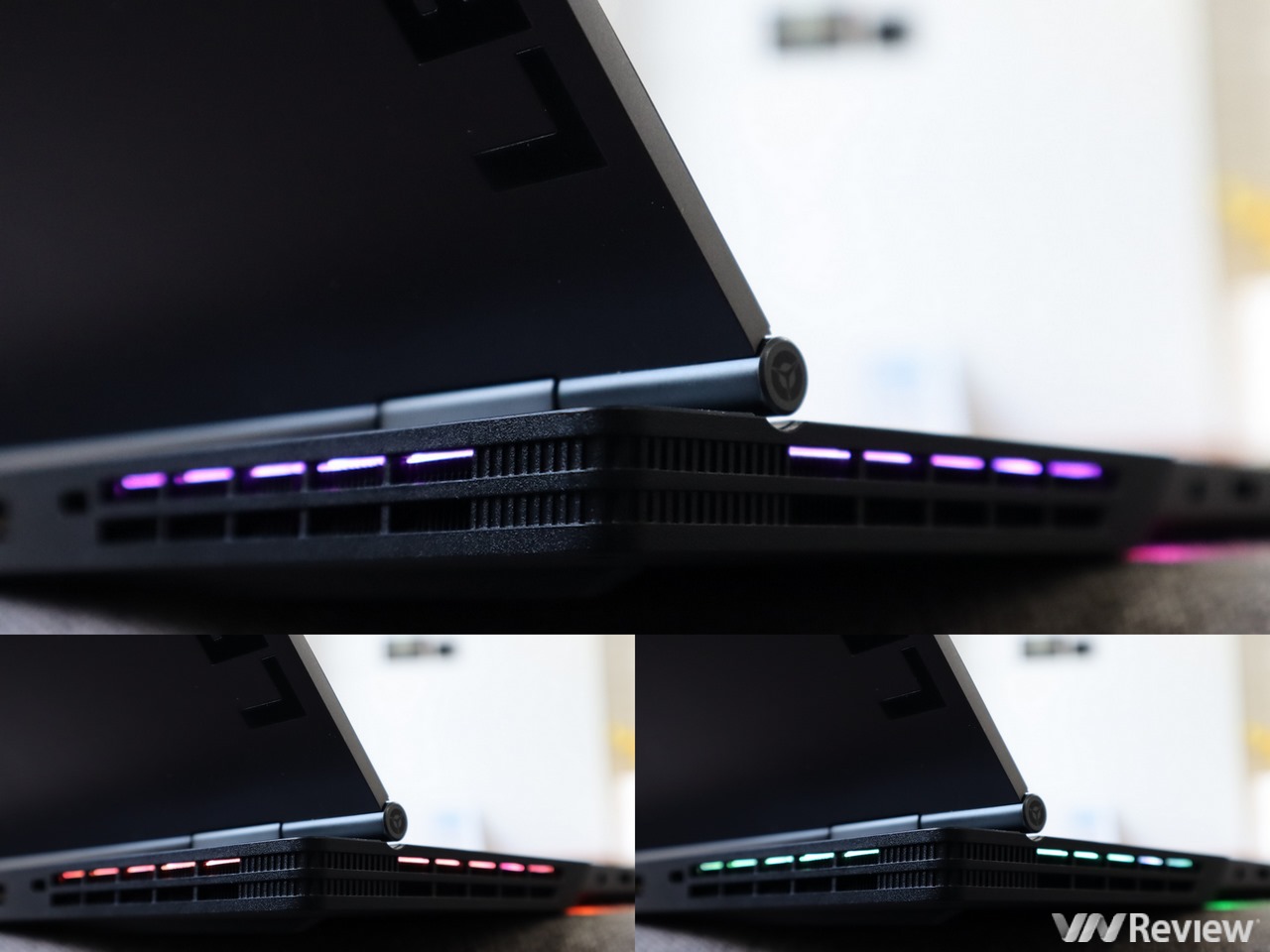 The heat sink slots also have the appearance of Led RGB

In terms of machining quality, the entire casing, frame, and palm rest, the underside of the Y730 are made of solid aluminum. Details surrounding the heatsinks on the sides and the tail are just plastic but still achieve the rigidity. The smooth, brushed aluminum case makes the Y730 nearly without fingerprints or sweat marks and if it is easy to clean.

The Y730's hinges can be opened with one hand easily and allow the maximum angle to be opened to 180 degrees so you can comfortably adjust the viewing angle accordingly. However, this hinge is not very sure, easy to wobble even if it is only lightly touched or when typing with normal speed. 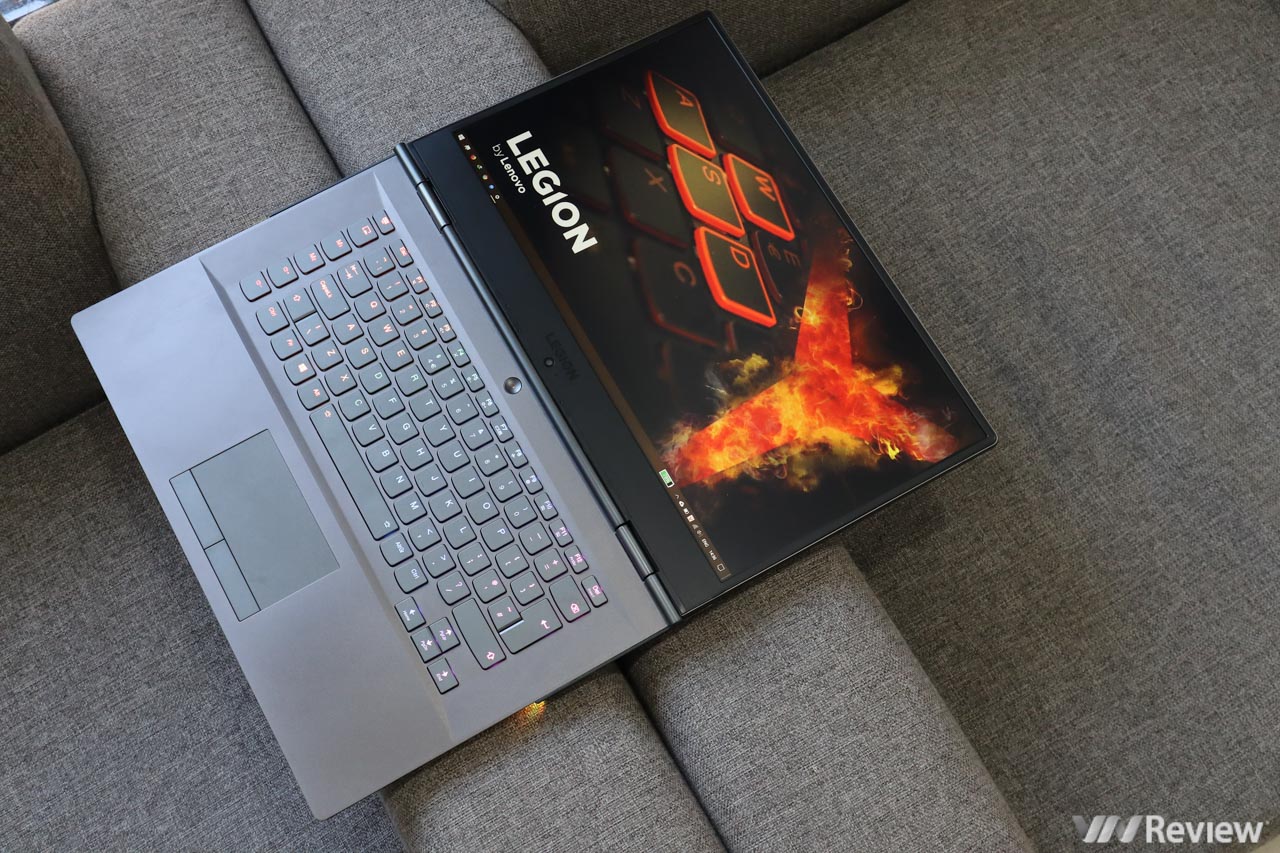 The number of connectors on the Y730 is quite varied with 3 USB Type A ports (including 2 USB 3.1 Gen2 ports), 1 USB Type-C port supporting Thunderbolt 3, Mini DisplayPort 1.4 and HDMI 2.0 ports. All the main connection ports are put out to the back edge, reducing the entanglement when plugging the mouse, the removable keyboard. These connection ports have both backlight illustrated, convenient to manipulate, help not to plug in cables. However, the Y730 does not have an SD memory card reader, which is essential for people who often work with cameras. 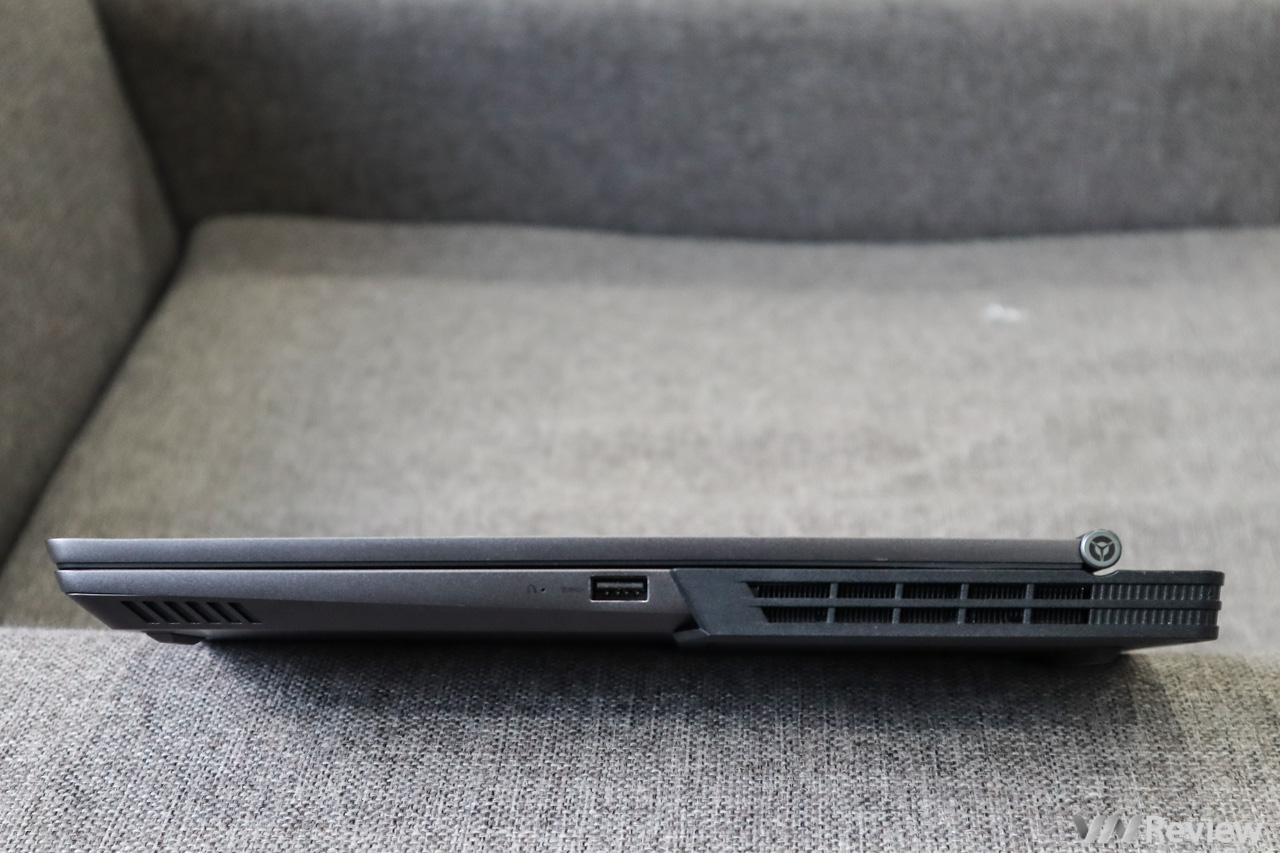 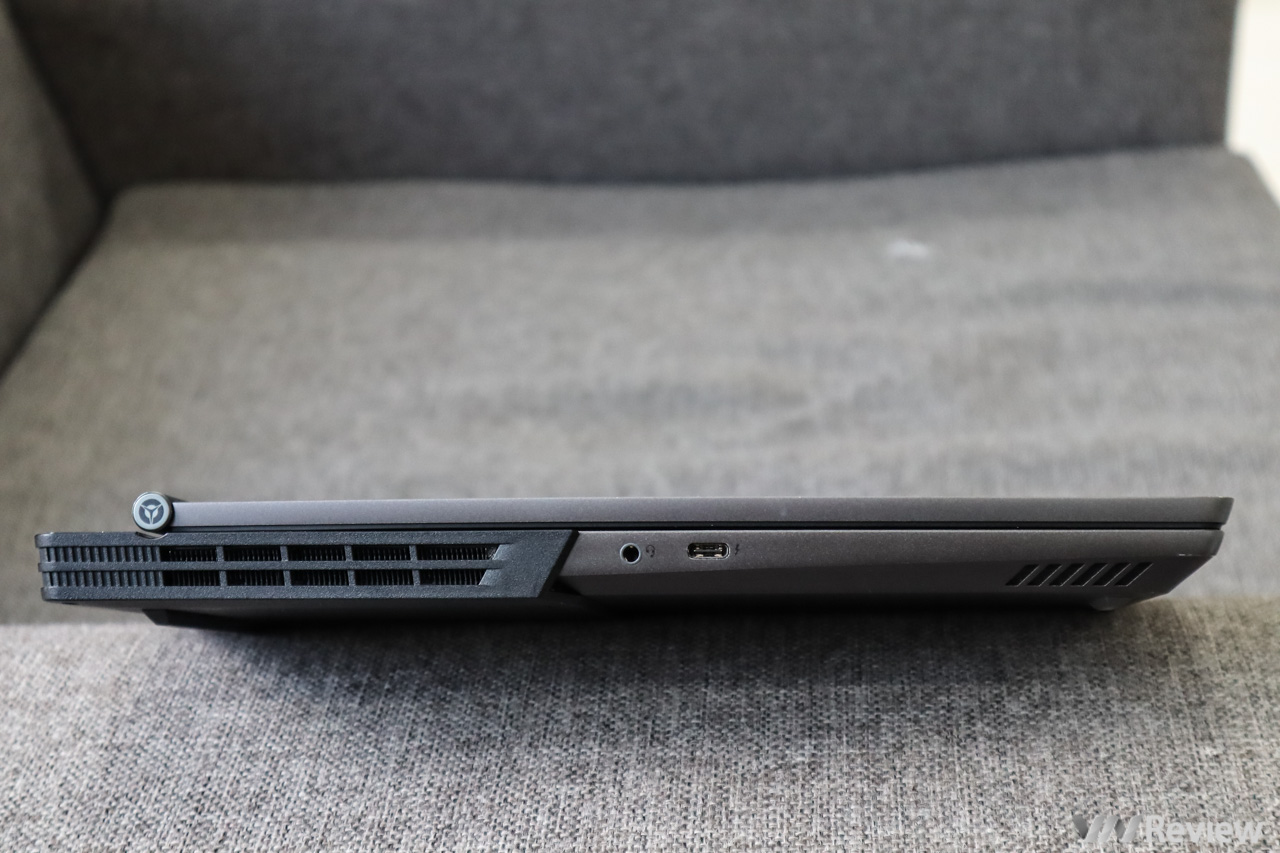 The left side has a USB Thunderbolt 3 Type-C port and a 3.5mm standard mic / headphone combo jack 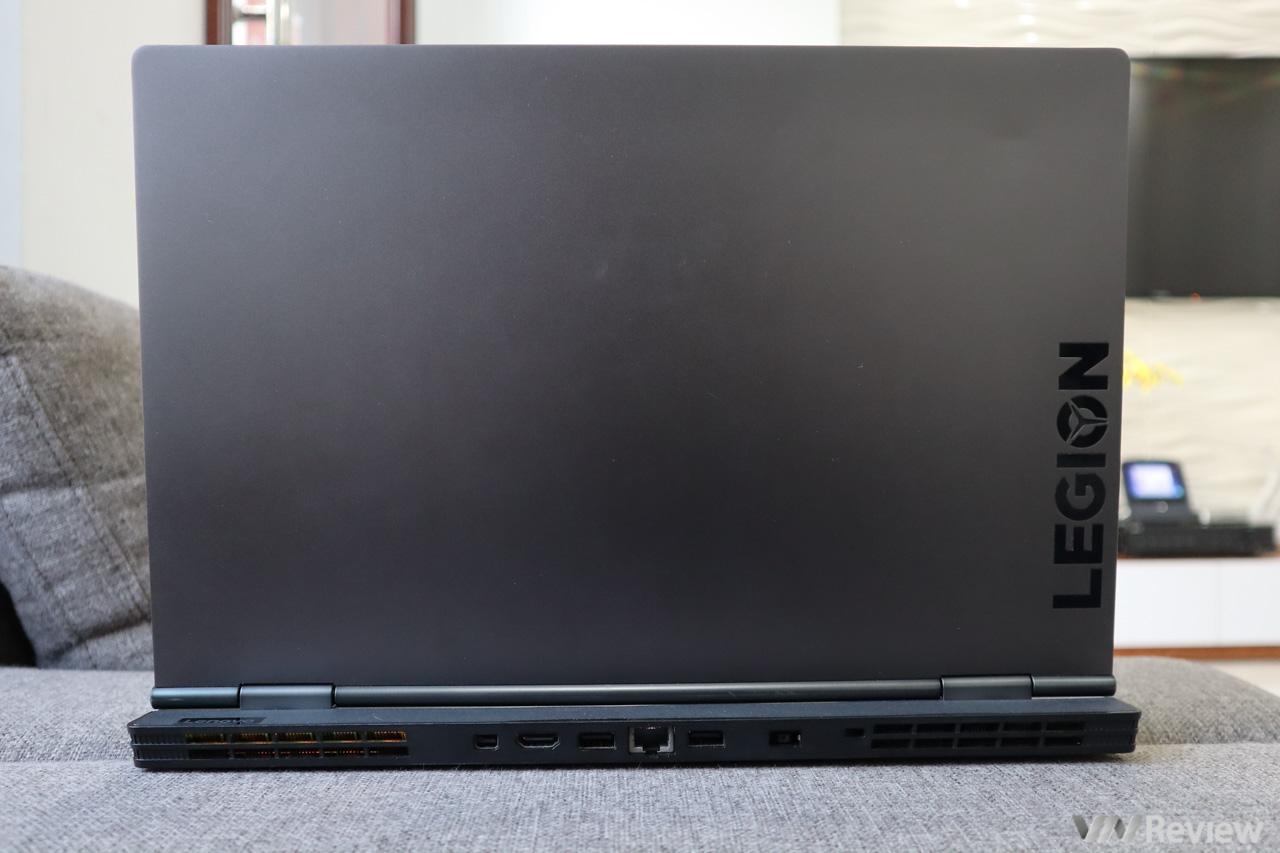 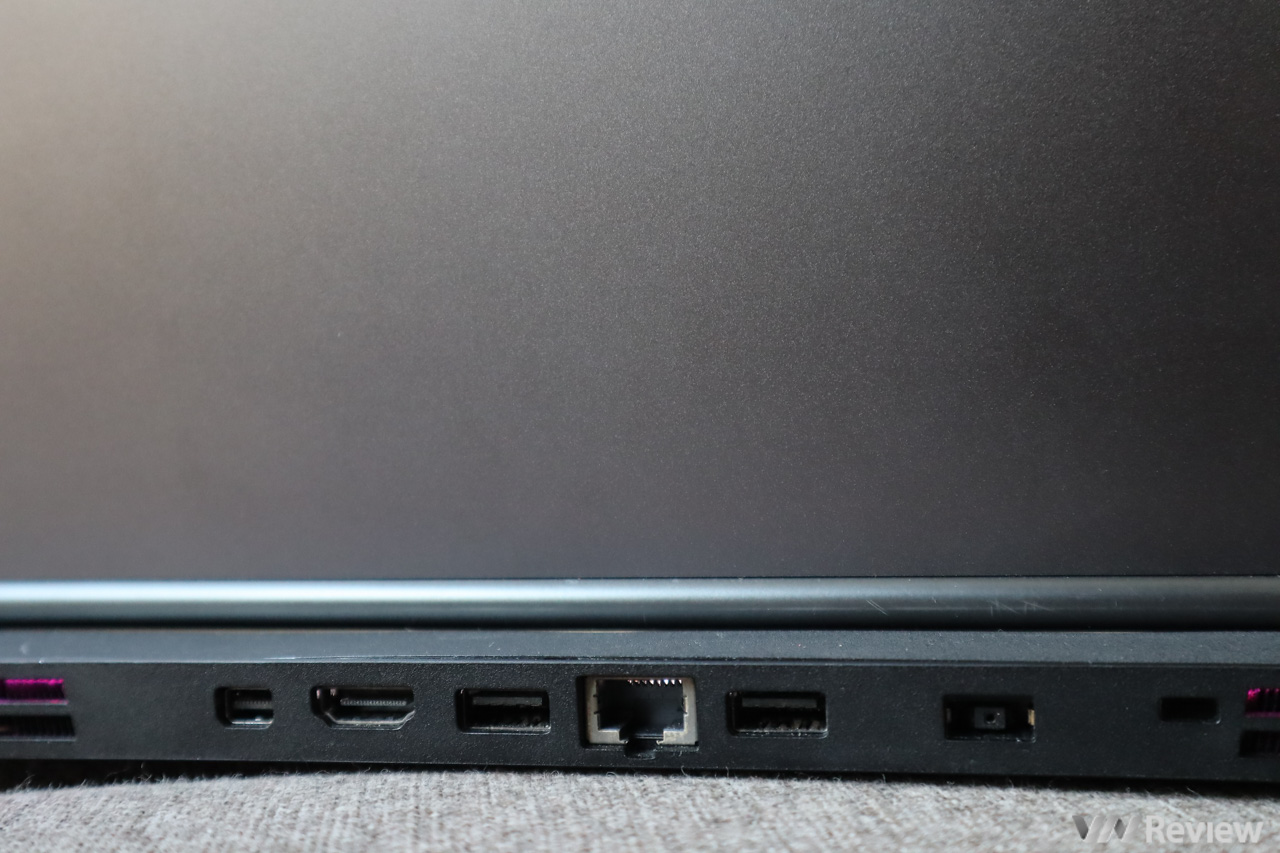 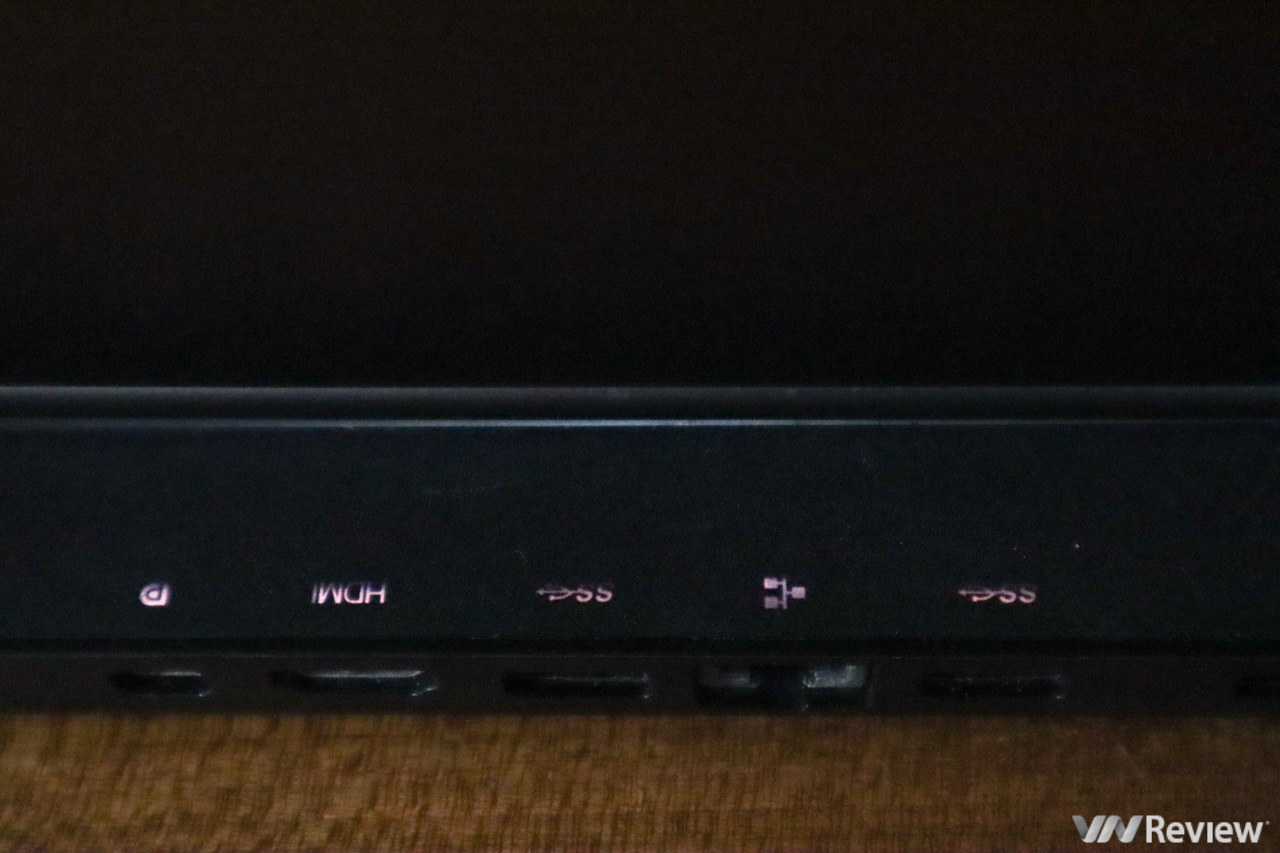 Keeping up with the trend of thin-screen monitors nowadays on mobile devices, Legion Y730 has been equipped with a slim border on all 3 sides to make it look more airy and modern. Note that the thin border is only available in the 15.6-inch version, codenamed 15ICH, while the 17.3-inch version (codenamed 17ICH) still uses the traditional thick border. 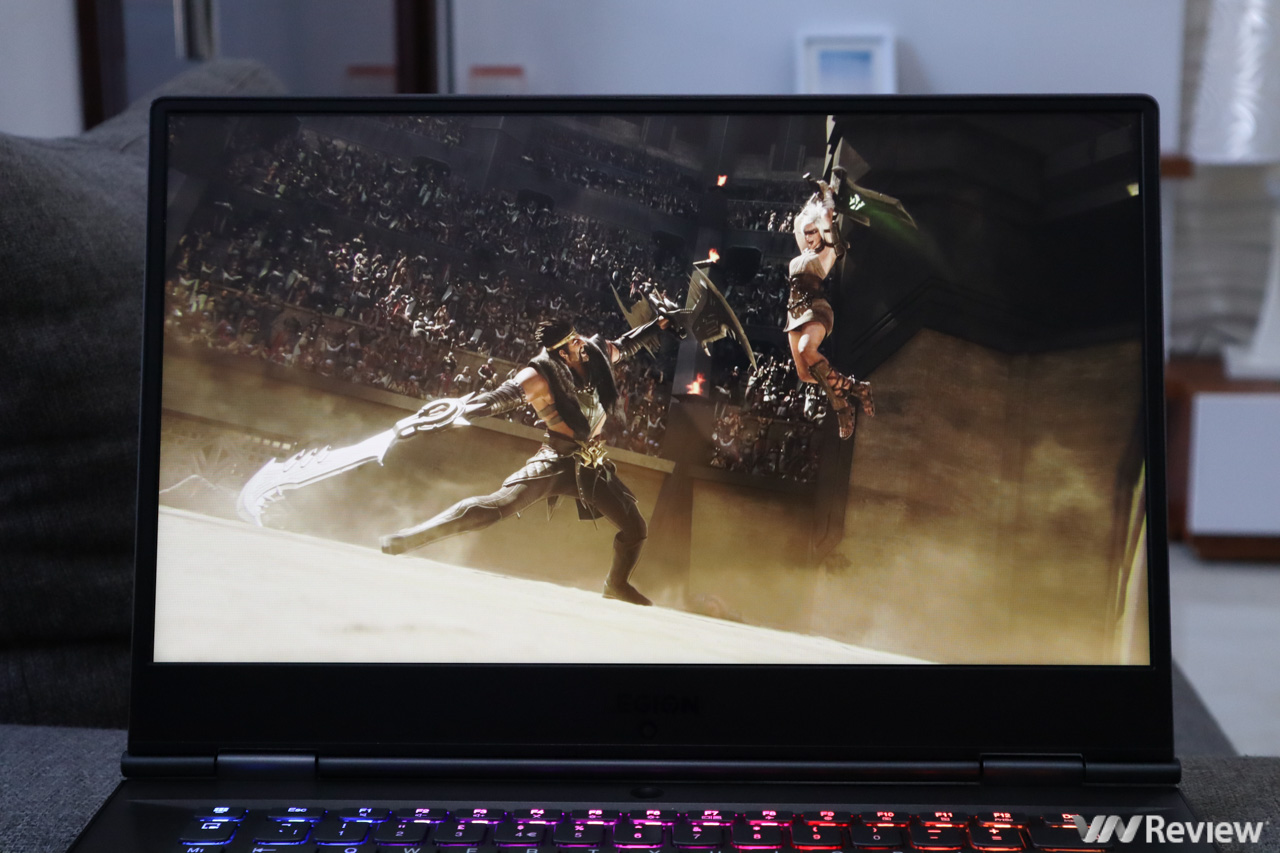 The edge of the border is close to the edge, the background is pushed close to the frame, making the image appear vivid, very suitable for playing games, watching movies. Full HD resolution on 15.6 inch size, 60Hz scan frequency is just enough to bring detail and sharpness. If you want a better gaming experience, the Legion Y730 also has a screen option of 144 Hz G-SYNC.

IPS LCD panel on Y730 gives good quality display, warm tones. Neutral colors, not too brilliant. Contrast, clarity, blackness and maximum brightness are all at a good level, wide viewing angle. The ground sheet is made of smooth and anti-glare, minimizing reflection and good outdoor use. The screen has a slight open light on the lower border, but not to the point of being uncomfortable. 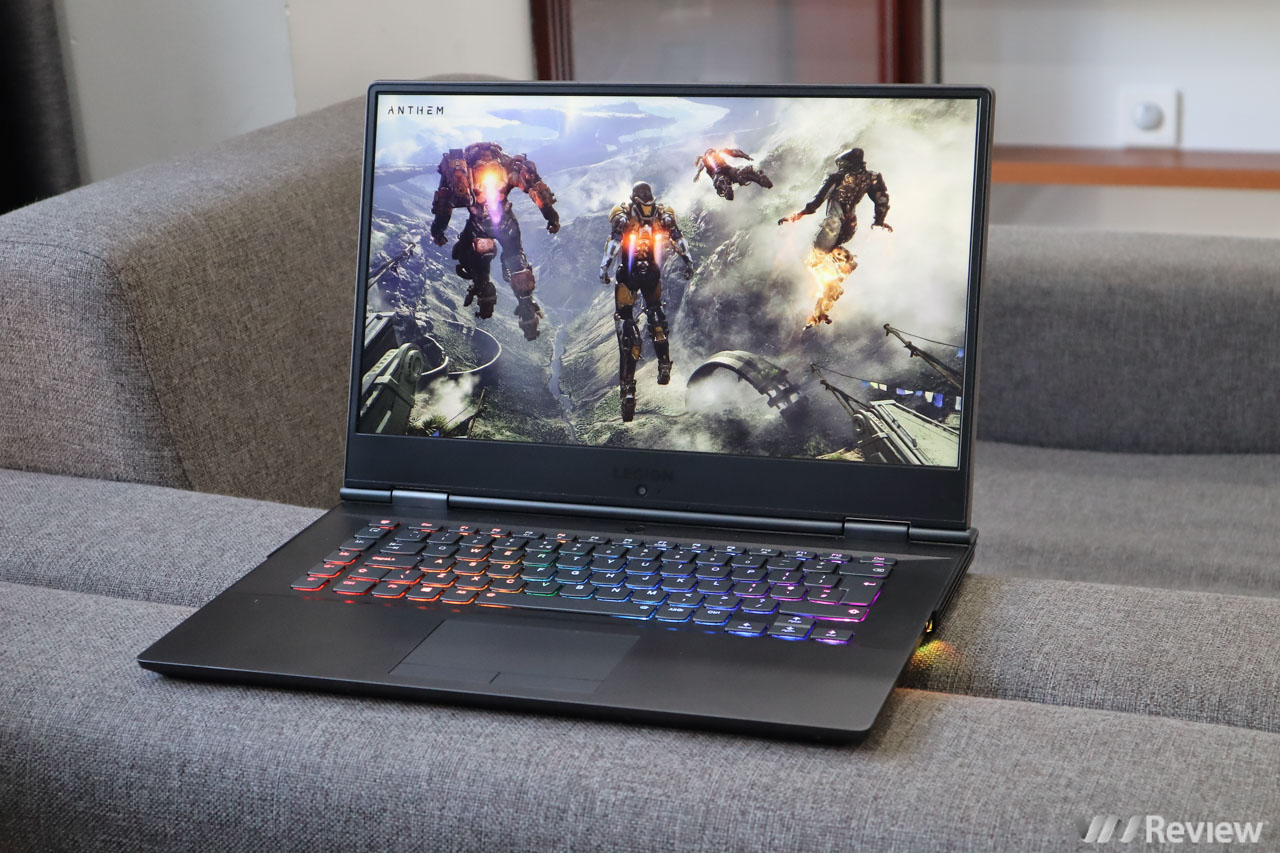 Due to the thin edges, the Y730 must switch the webcam down to the bottom edge, making the image often be taken from the bottom up, making it difficult to adjust the angle directly. Anyway, a laptop webcam is now almost a feature for fun due to its low resolution, poor quality even in bright conditions and the Y730 is no exception. You should buy an external webcam or use the camera on your phone to be disappointed with the quality of the webcam available. 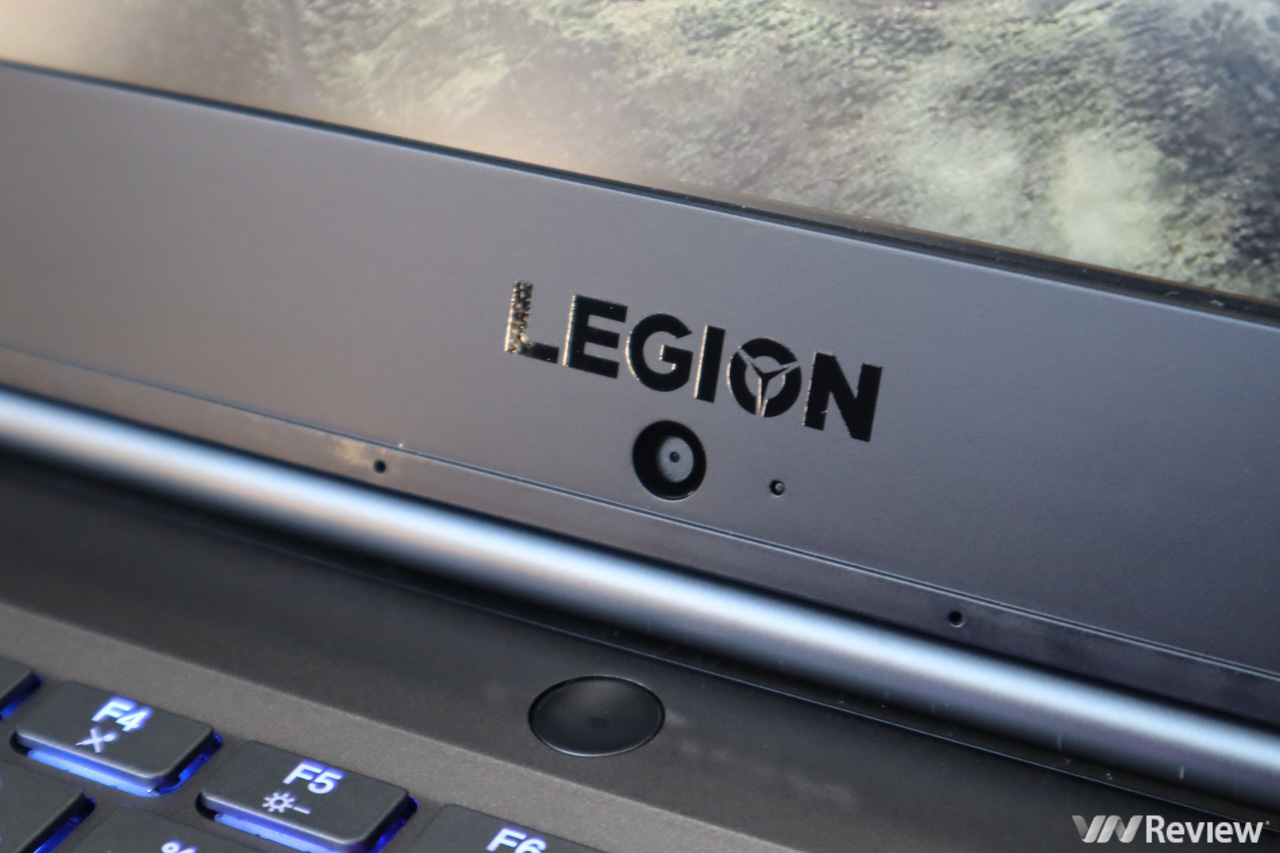 In terms of sound, while only equipped with two medium sized Dolby Atmos Speaker located on the underside, the sound quality that the Y730 brings makes the writer really surprised. Loudspeaker volume is great, even on par with portable Bluetooth speakers. Clear sound, thick, warm, full bass treble, not shy or distorted when maxed out loud, making watching movies, listening to music, playing games very well. 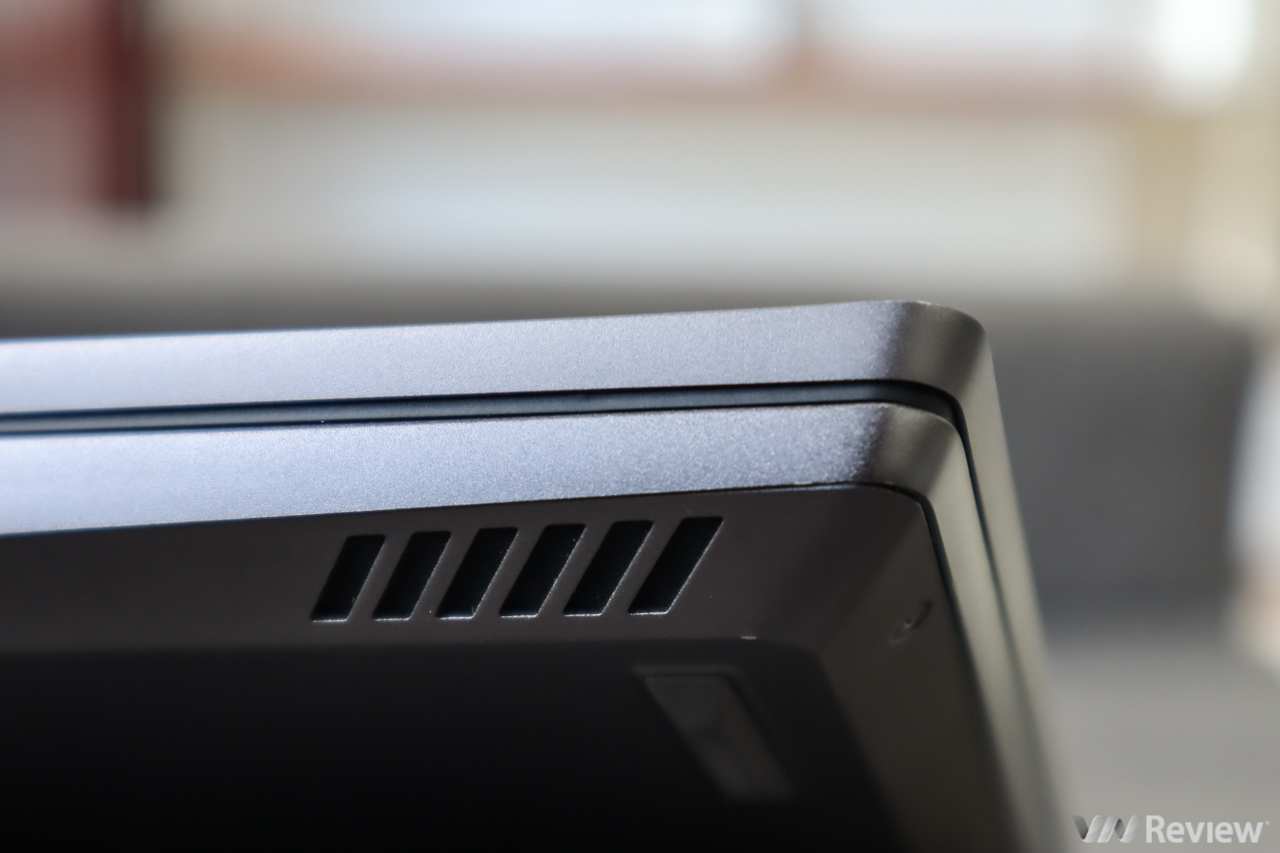 Keyboards so far are still strong on Lenovo laptops and of course the Y730 inherits that tradition. It offers a pleasant typing experience with high bounce, deep journey, quick response but a little flex. 4 large-size navigation keys, conveniently placed for operation. The 100% anti-ghost feature makes this keyboard able to receive signals simultaneously from any key, suitable for titles that require fast and continuous operation. 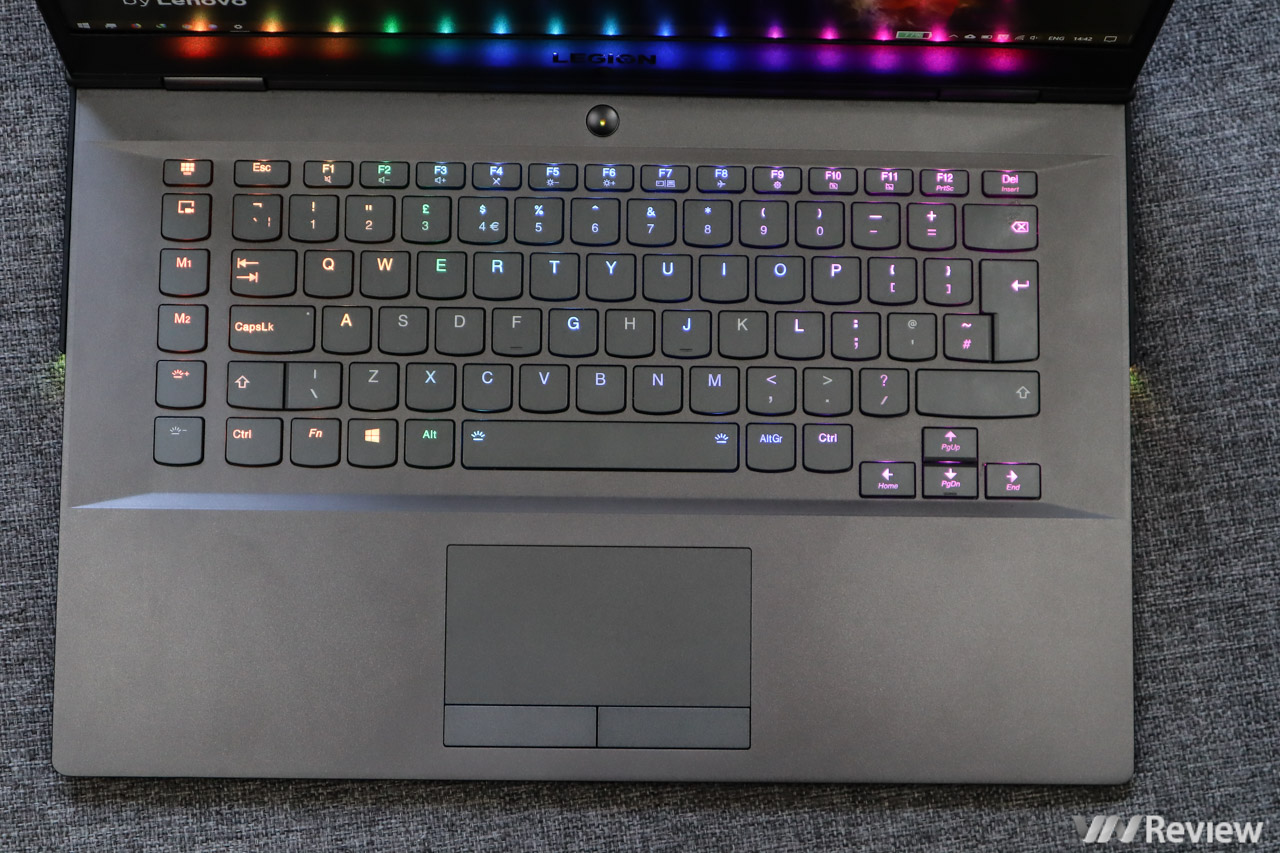 The Y730 also has a separate row of 5 macro keys on the left of the main key cluster, which can be freely customized to any feature via the included Magic Y Key software. However, you will need to get a little familiar with this key because they are quite easy to get mistaken when typing. 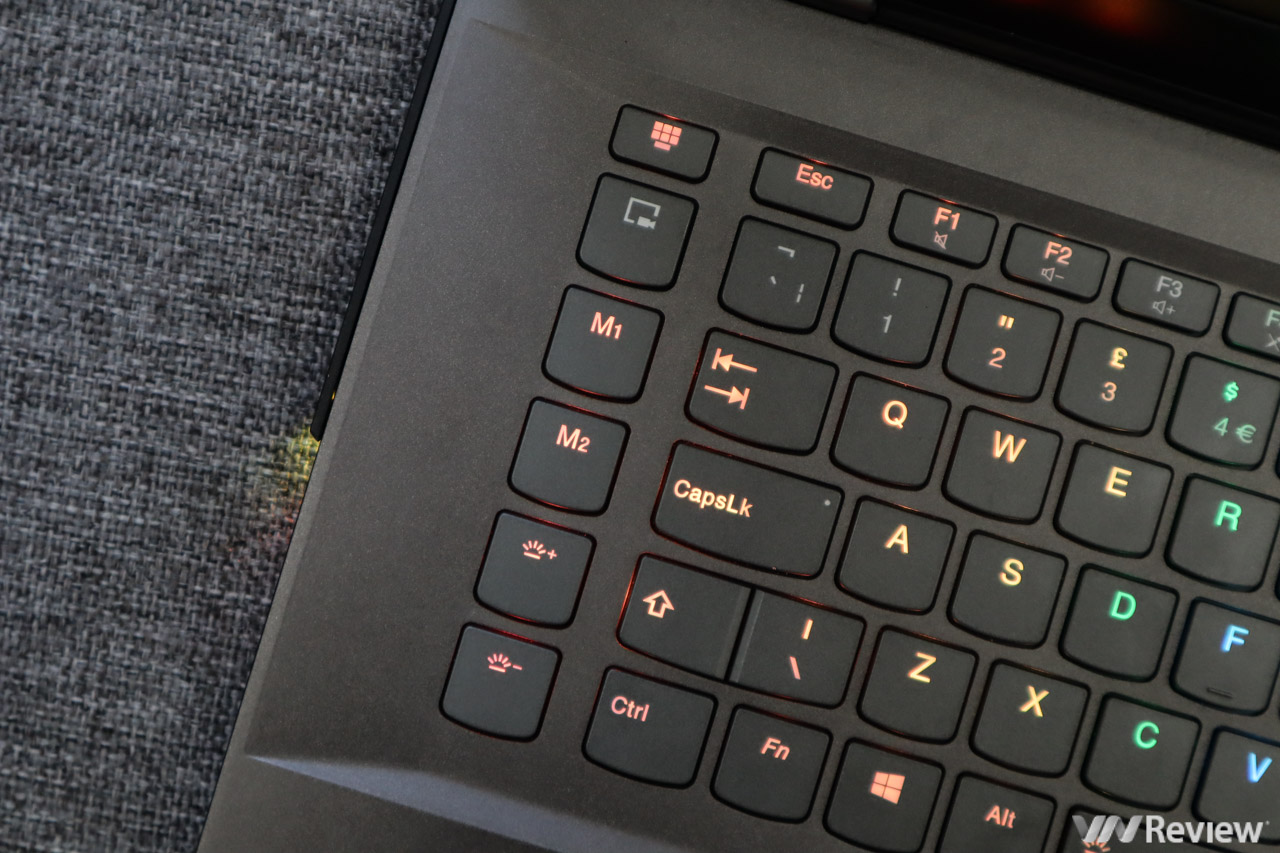 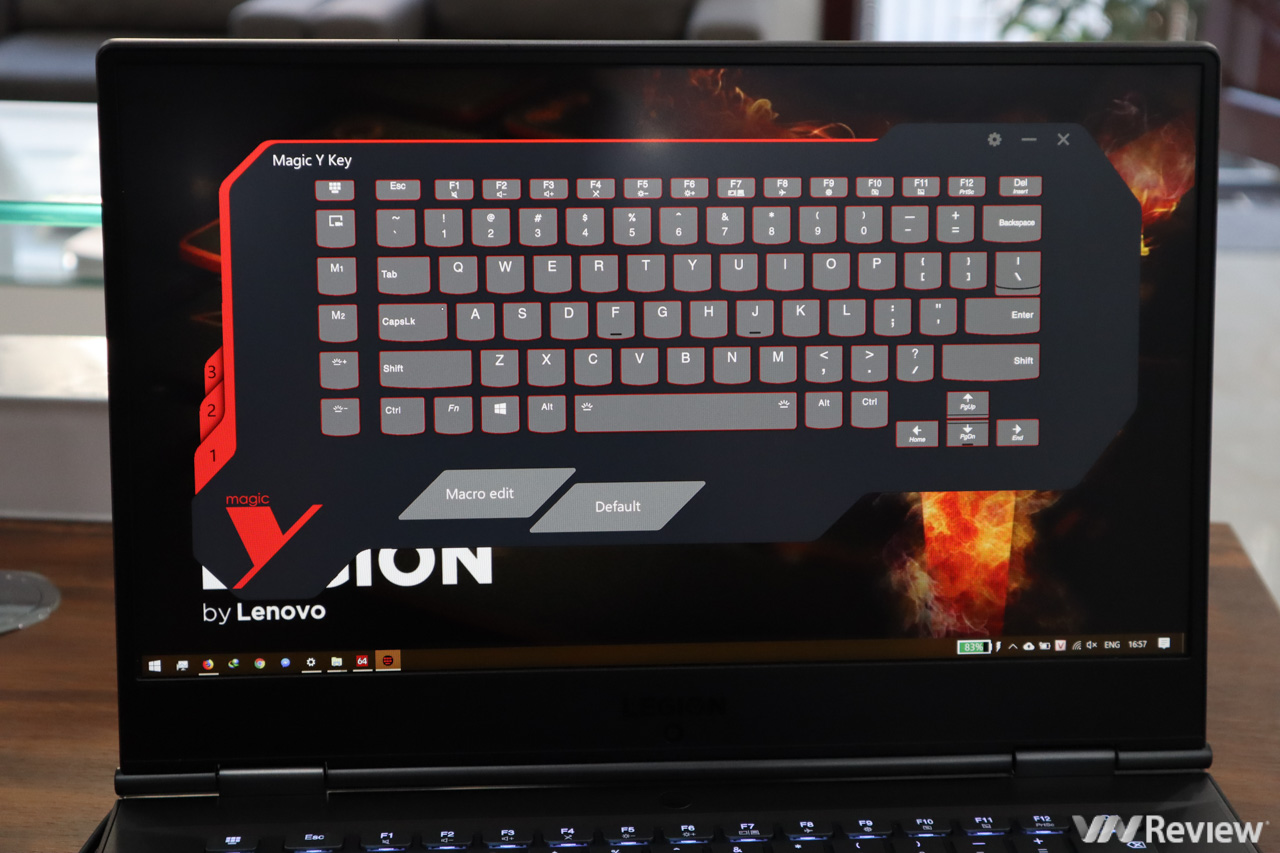 As mentioned, the keyboard on the Y730 has a multi-color RGB light system, high brightness, separate layout on each key. According to Lenovo's announcement, Legion Y730 is the world's first gaming laptop equipped with CORSAIR iCUE color custom software system, including 6 different color modes created by a combination of more than 16 million colors. . Many eye-catching lighting effects are built-in and there is an auto-blinking mode for fun music.

The touchpad part of the device has a small size, and instead of using the usual clickpad type, Lenovo comes back with a traditional 2-left / right-click design. The touchpad has good sensitivity, smooth surface, providing a smooth, accurate mouse experience. 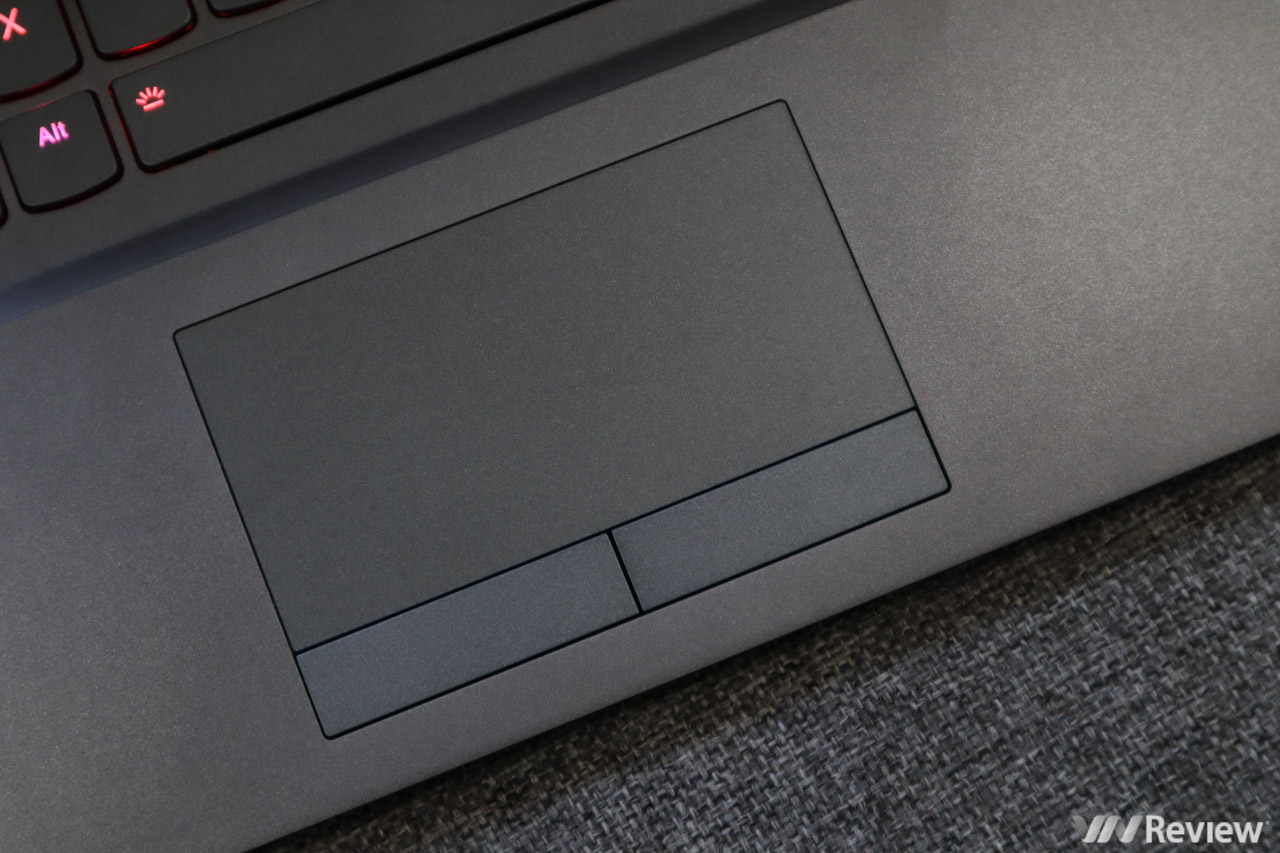 With this configuration, the Lenovo Y730 delivers smooth, agile performance in most of the common tasks I often use such as entertainment, gaming and working, video rendering, movie editing … 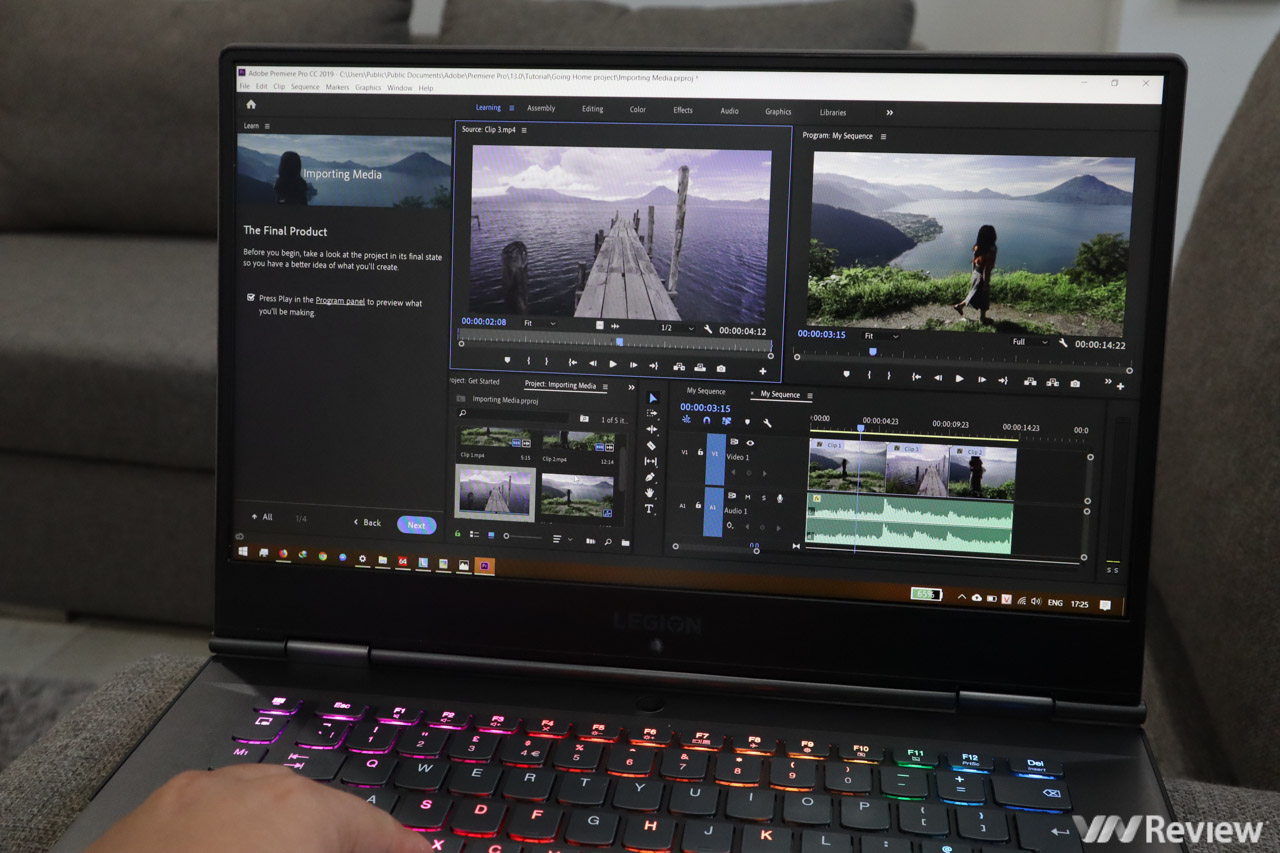 In the familiar benchmark lessons like CineBench, GeekBench, Legion Y730 all gave good results. However, PCIe SSD performance is not as high as expected when the data writing speed is quite low. 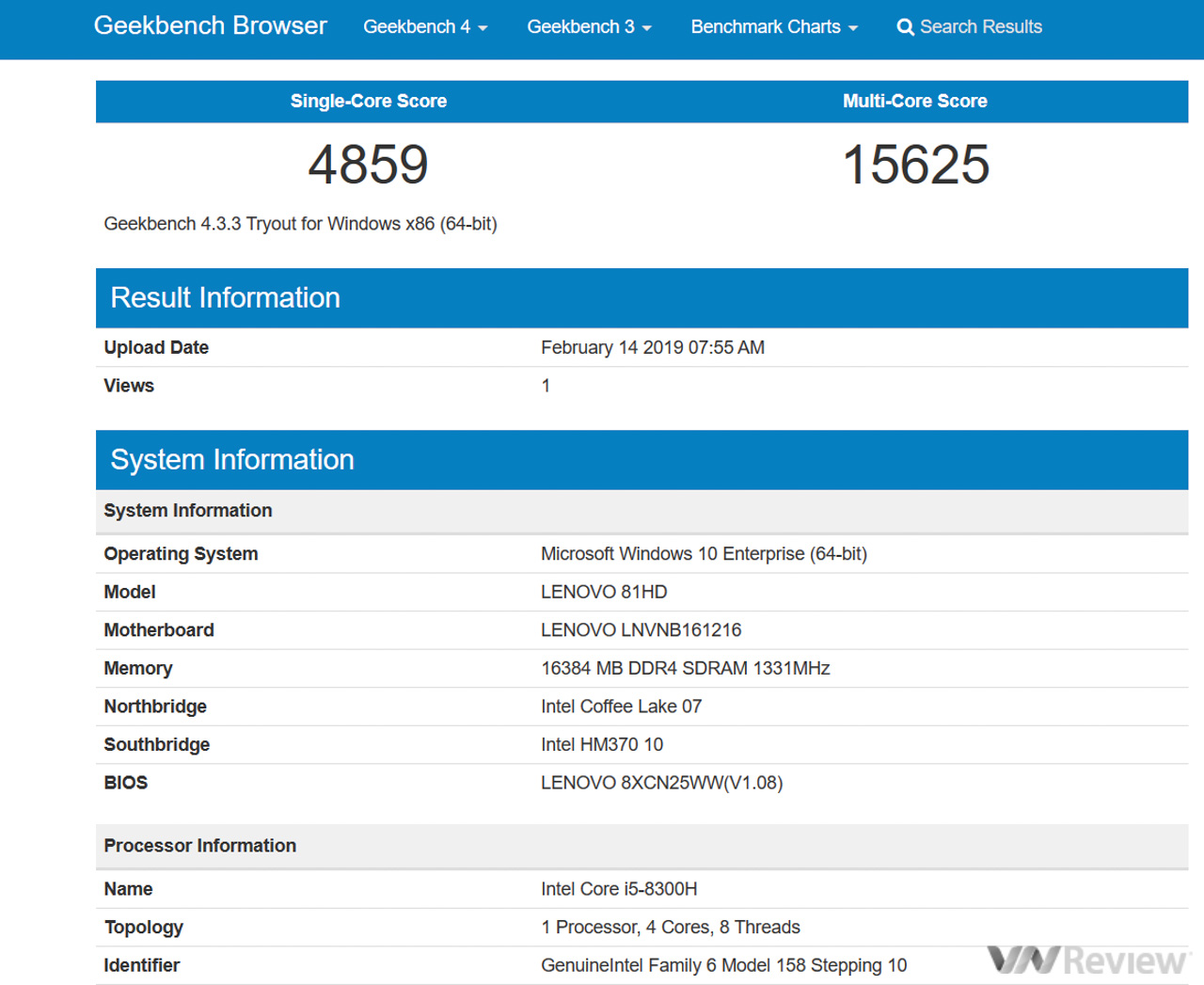 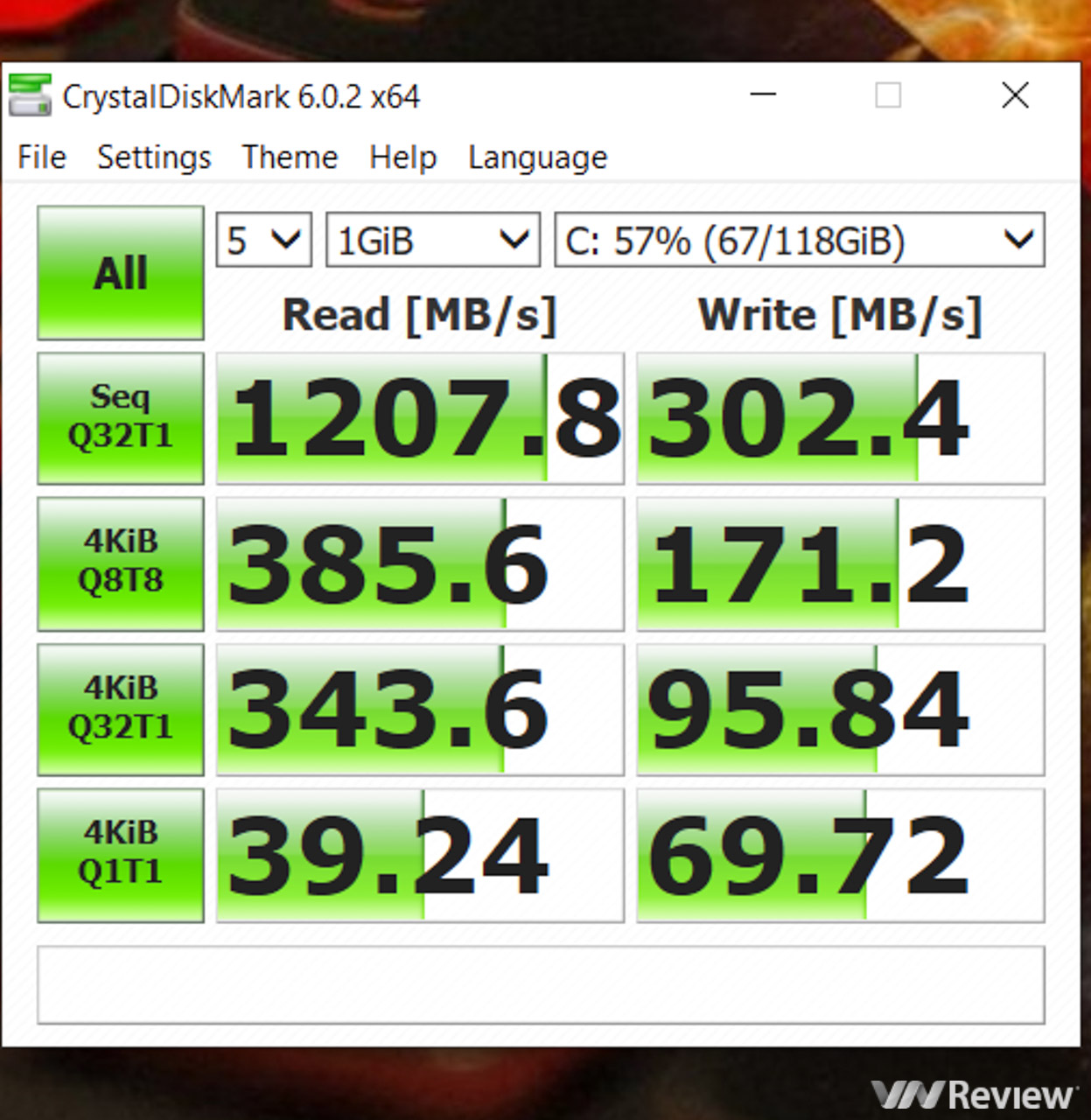 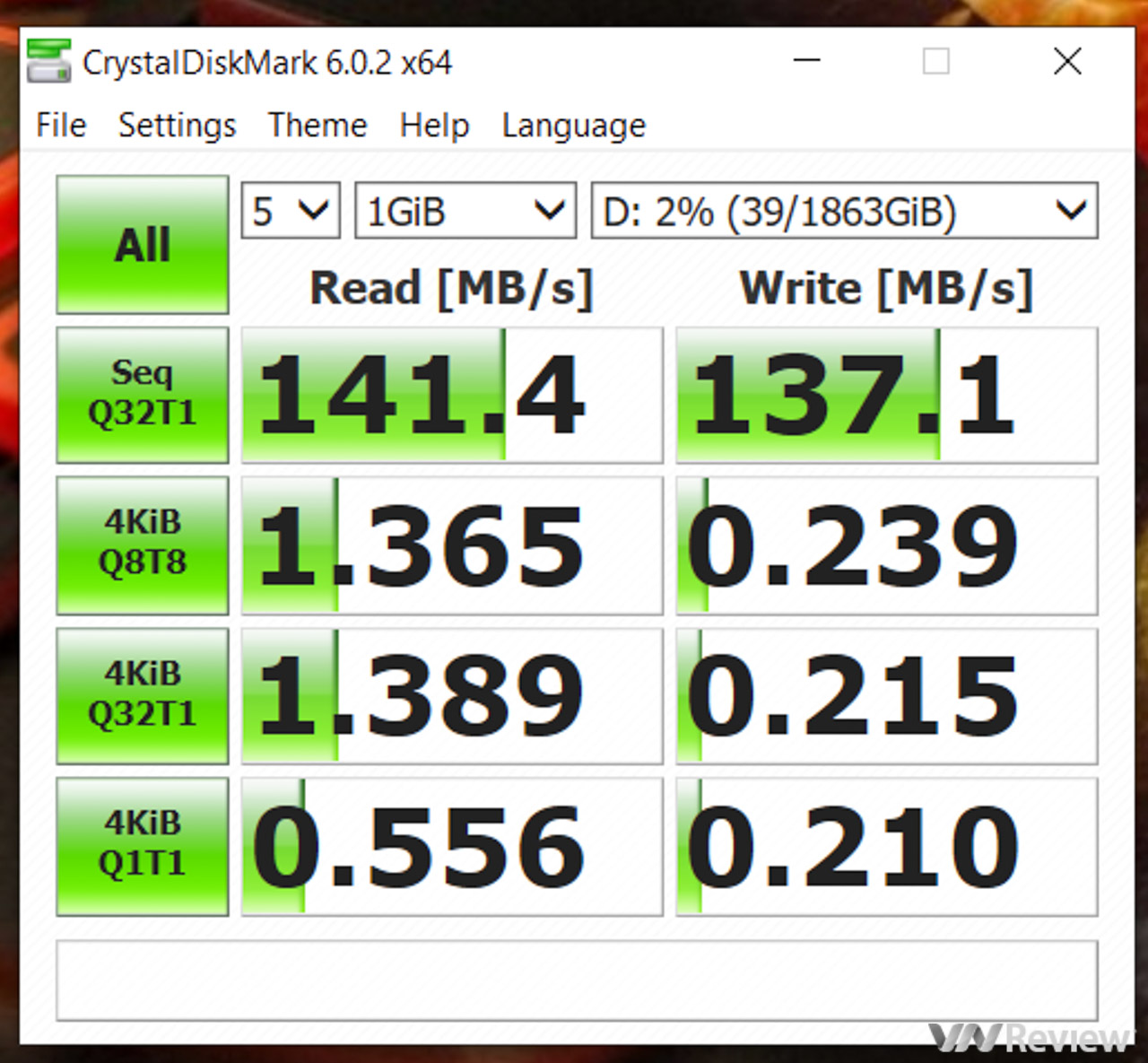 NVIDIA GTX 1050Ti graphics card 4GB DDR5 is enough to allow Legion Y730 to weigh well on popular titles like PUBG, Apex Legends, Fortnite in Full HD resolution, medium to high graphics setting, frames stable from 50 to 60 FPS. Of course, if you try to push the game settings to the maximum as Ultra will be too much for 1050Ti or you will have to accept lowering the resolution a bit. Unfortunately the Y730 does not have higher graphics card options like 1060. 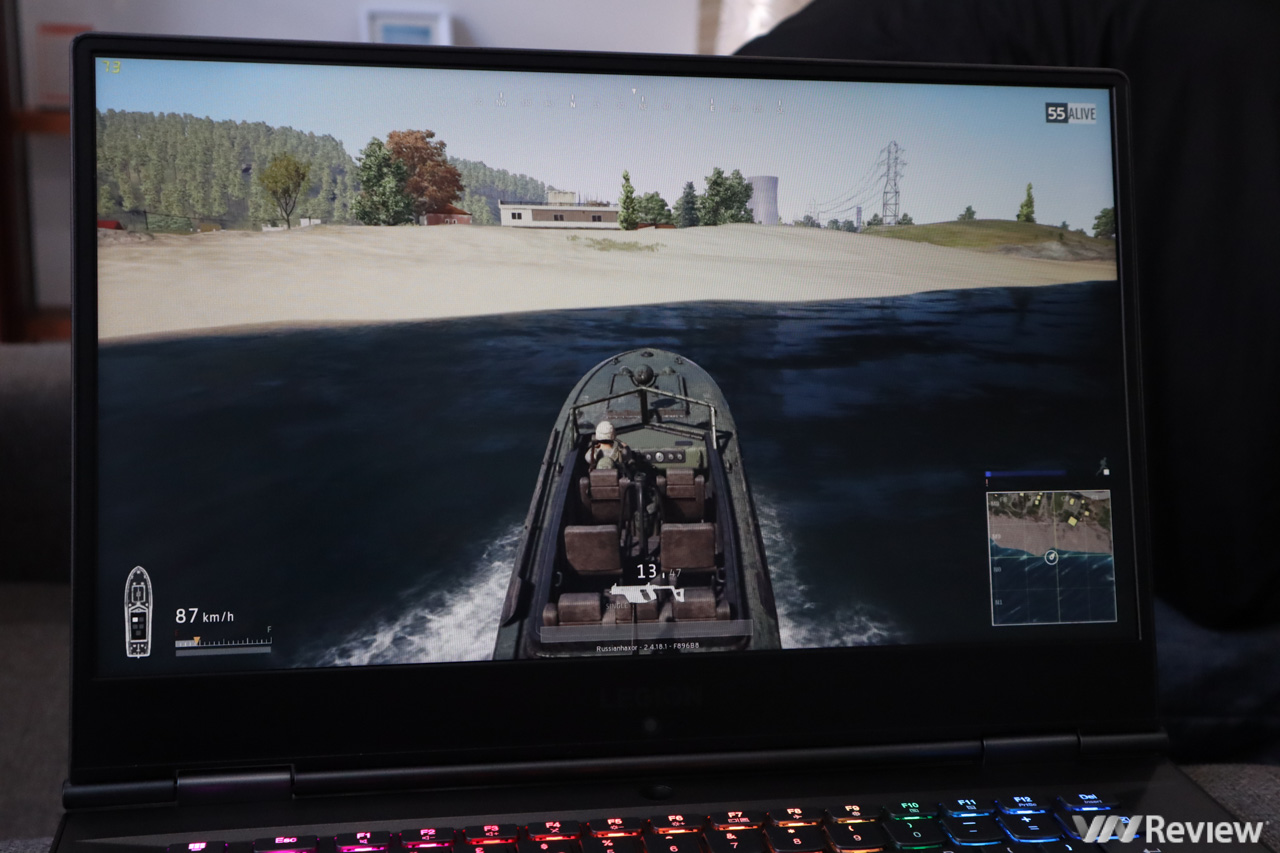 The ability of the Y730 to upgrade is quite good when you just need to remove all 11 screws on the bottom and have access to the internal components. The device still has an empty RAM slot to upgrade to a maximum of 32GB. Users can replace the attached HDD with SATA SSD to increase performance. PCIe NVME M.2 2280 SSD can also be replaced by higher capacity and performance options. 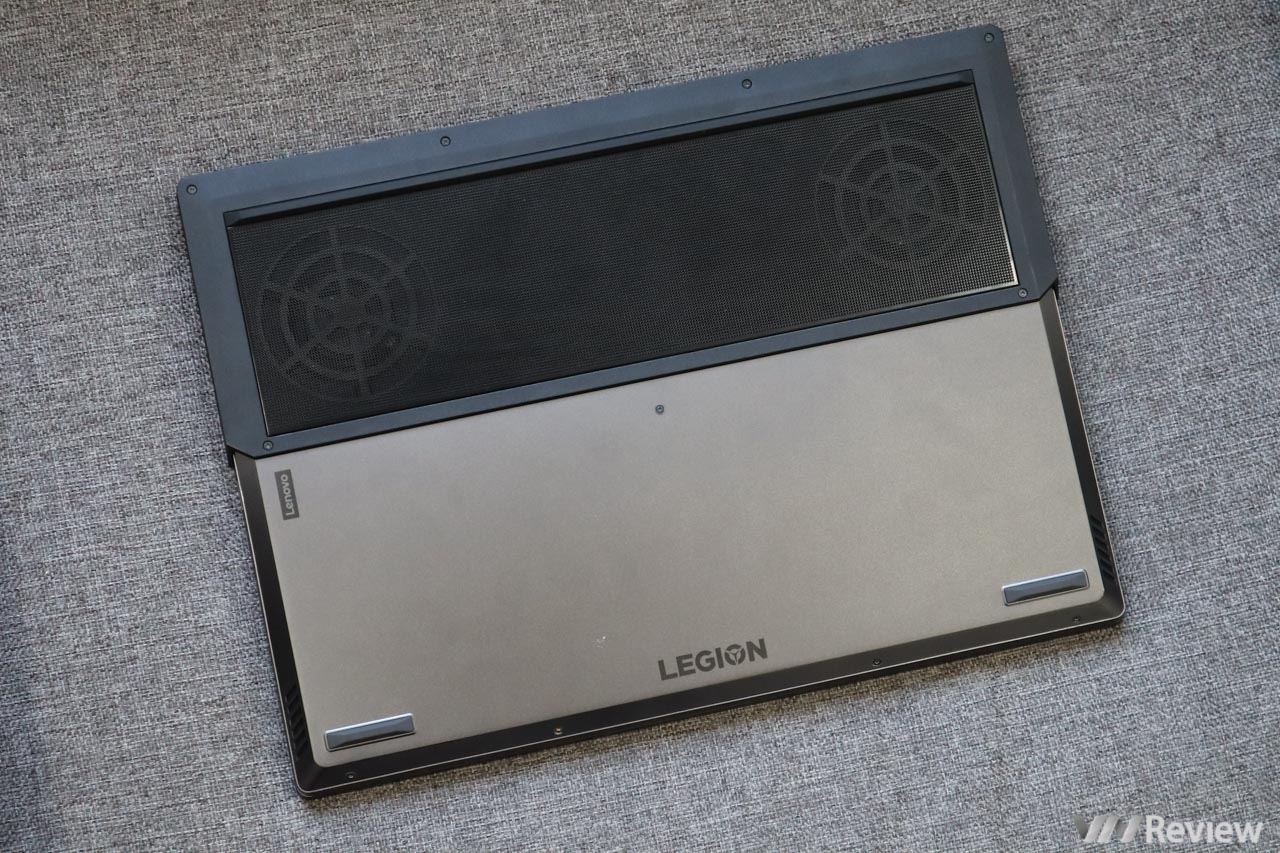 In terms of temperature, operation noise, during benchmarking, heavy game play or video rendering, Legion Y730 operates completely cool and smooth. The resting part or the 4-key WASD area, where the hand is constantly in contact almost does not warm up at all. The heat will be released at the 4 radiator slots arranged evenly on the next two sides and edges. Meanwhile, the underside with 2 large 50mm radiator fans will be responsible for taking cool air to cool the system. With an efficient cooling system, the Y730 can keep the CPUCore i5-8300H running on Turbo Boots at a high pulse rate of about 3.9 GHz for a long time without having throttle phenomenon (reduced pulse due to overheating).

Battery has fast charging, charging 1 and a half hours is full

The battery has never been the advantage of gaming laptops due to their strong configuration that is often very power hungry and the Legion Y730 is also hard to escape from that rule. With the 57Wh battery included, even when used normally with light tasks such as browsing the web, writing documents, the device can only last for about 3 hours at most. If used to play games, the battery life is only about 1 hour. 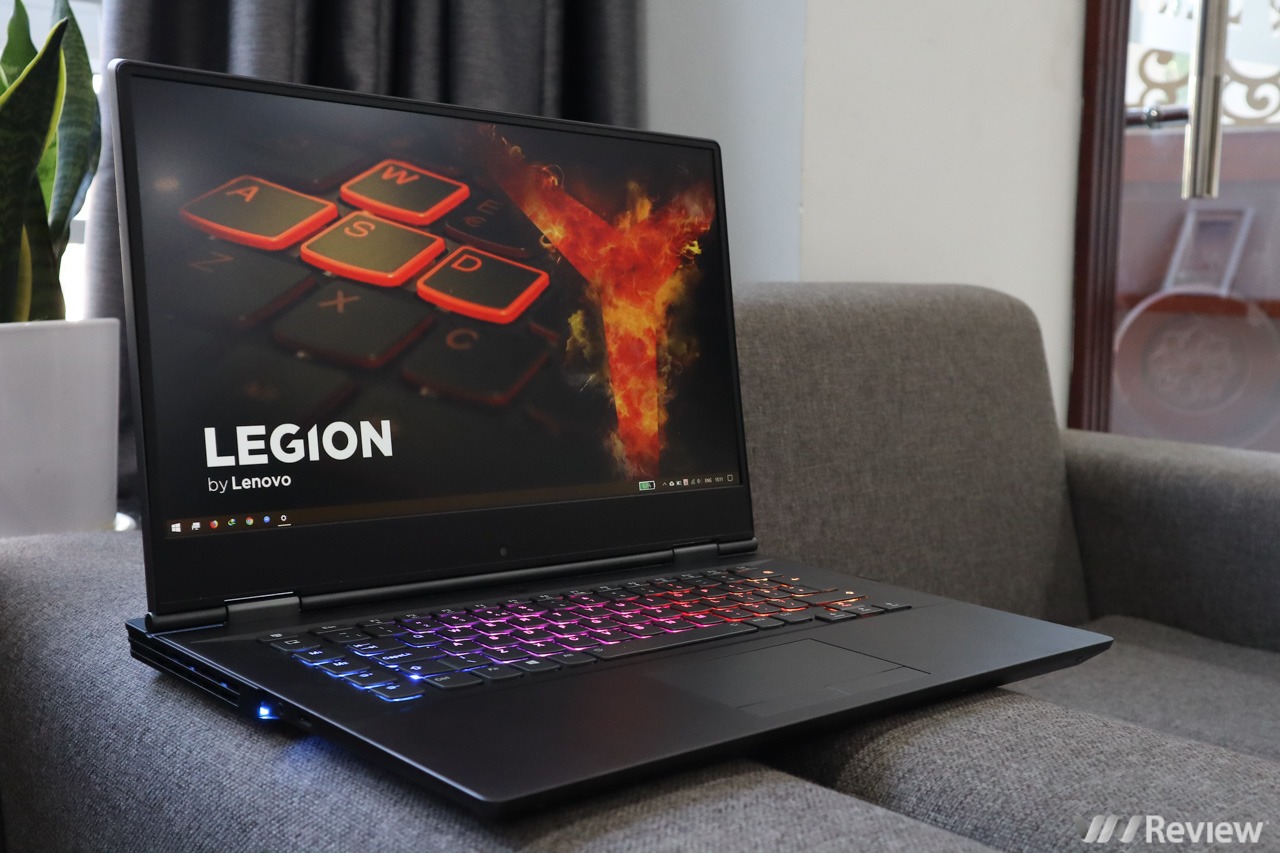 Notably, the Y730 has a Rapid Charge fast charging mode, so the full charge time only takes about an hour and a half. You can turn on and off fast charging via the pre-installed Lenovo Vantage software. The software also allows you to tweak system settings to optimize when playing games, updating drivers or checking hardware errors …

Note that when running on the battery, the Y730 will significantly reduce performance and the maximum number of frames is also limited to 30FPS, so it's best to always plug the laptop whenever possible. 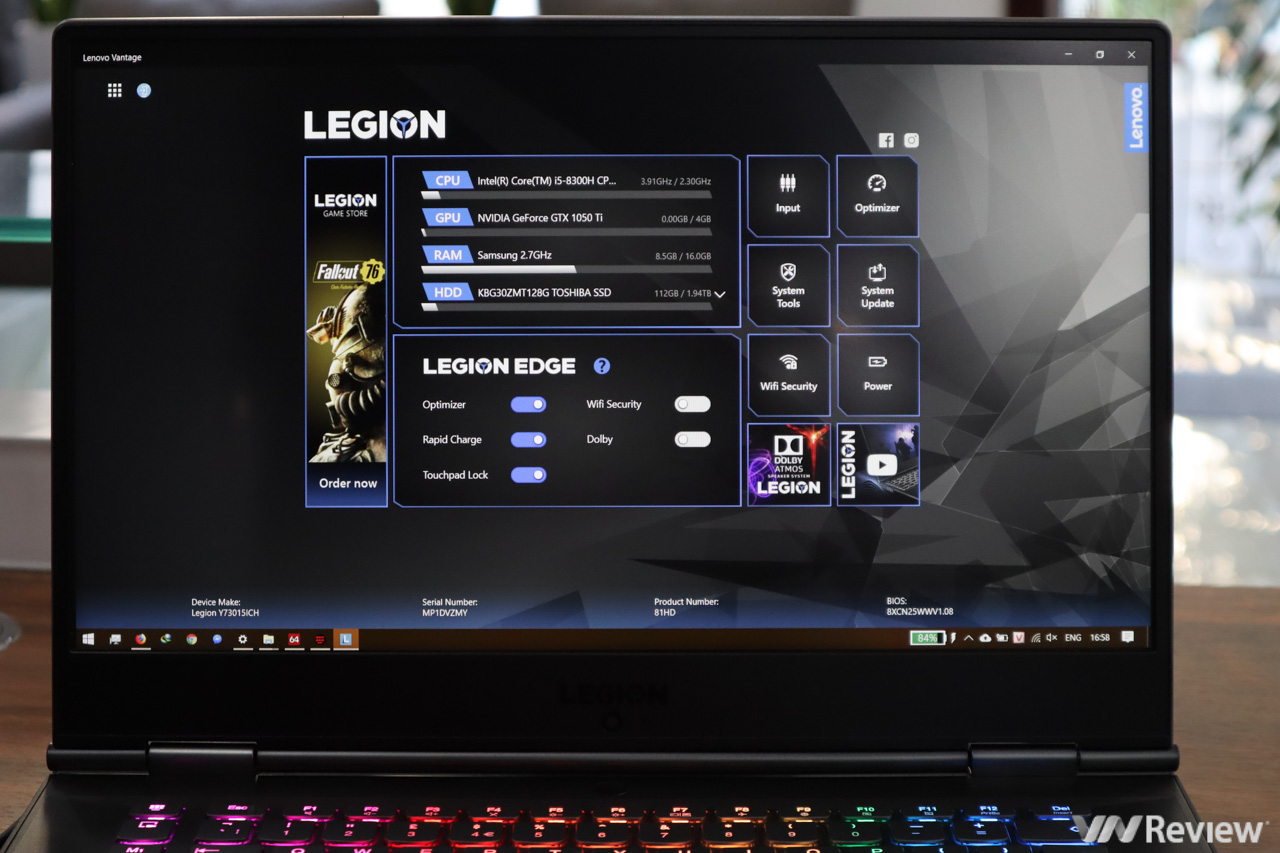 The idea is that laptop gaming is big, the hole in the past few years seems to be inaccurate. With the boom of hardware technology, computer components are getting smaller and smaller while ensuring strong performance.

With Legion Y730, you will get a laptop that works well for both work and entertainment, of course including battle games. This device is also particularly suitable for those who do not want to stand out from their peers, friends, avoid staring eyes of the boss or teachers, parents thanks to the "gentle" appearance, even There is also a "serious" part like a business laptop.