Review iPhone 11 with iOS 14.5 update: Great when it comes to performance, more buffalo battery and not overheating (Updating)


After a lot of beta versions, iOS 14.5 was officially launched by Apple for the iPhone globally, of course, including the iPhone 11. This update has a lot of notable features, such as unlocking. iPhone using Apple Watch, adding new emoji, … But will iPhone 11 to iOS 14.5 get overheated, have low battery, or improved performance? Please see the article below to find the answer.

Note: iPhone 11 in this article is the smartphone that I have been using for more than 1 year and its battery status is 85%. The article is still being updated and will be finalized on April 29. Have you remembered to it!

See also: Instructions on how to update iOS 14.5 officially with many new features

As I mentioned above, this is an iPhone that has been with me for over a year. I bought it from February 2020 and calculated that I used it a bit bad, the battery status from 100% to 85% after just 1 year. Well now, I would like to give you a quick point through the parameters of this iPhone 11, as follows: 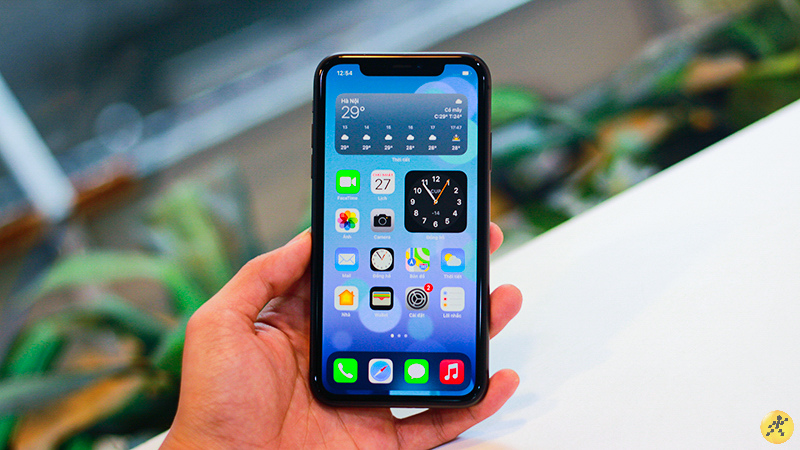 According to the above parameters, we can see that the Apple A13 chip is only 1 year old, I believe that my iPhone 11 after going to iOS 14.5 will still be delicious. Follow-up procedure below is clear). Well, the new iOS update has a capacity of about 1.27 GB and the total time for me to complete the update is about 1 and a half hours (because I use the internet at the coffee shop so it takes a bit). 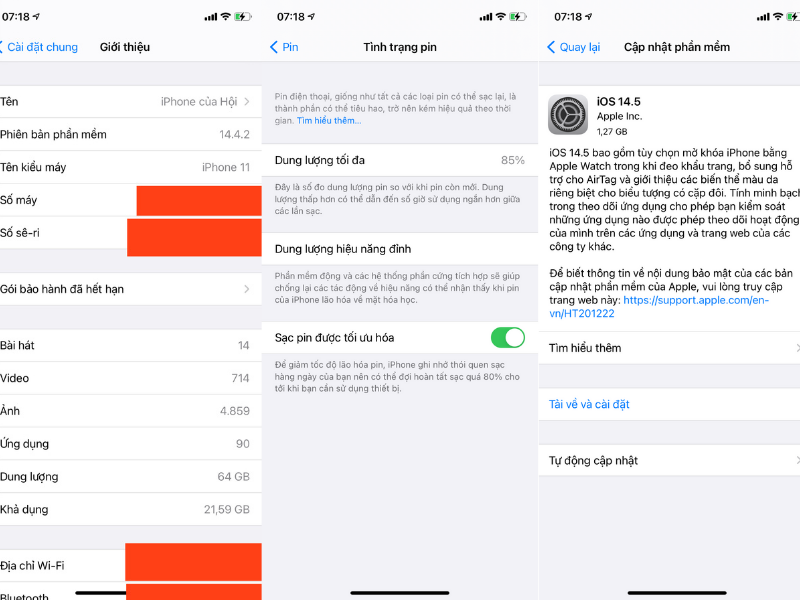 Since updating iOS 14.5, my iPhone 11 feels smoother and smoother when I perform touch gestures on the home screen or open apps. At that time, I tested the games (Lien Quan Mobile, PUBG Mobile, Call of Duty) on my iPhone 11 to see how smoothly the machine would play. The FPS chart or the graphic settings of each game, I leave it here for you guys.

As you can see in the above FPS chart comparison, my iPhone 11, after going to iOS 14.5, has processed the PUBG Mobile game much smoother and more stable than the old iOS version. During my game, the FPS was always maintained at 60 (the pink line followed an extremely eye-catching line), in stark contrast to the unstable FPS chart on the iPhone 11 running iOS 14.4.2.

Graphics settings in the game PUBG Mobile that my iPhone 11 can be adjusted.

The reason probably comes from the temperature of the device during my experience. iPhone 11 running iOS 14.4.2 has a hot condition after about 4-5 minutes of playing PUBG (although I leave the average screen brightness), the FPS has dropped continuously (as shown in the FPS chart above). Regarding the graphics settings in the game, I keep the same, before and after the iOS update is the same.

In terms of graphics, Lien Quan Mobile is somewhat inferior to PUBG Mobile, so my iPhone 11 can completely fight well. Comparing the FPS chart in both iPhone 11 running iOS 14.4.2 and iOS 14.5, I commented that there is not too much difference, the FPS fluctuation is not too large.

During the process of playing Lien Quan Mobile, iPhone 11 (before and after the update) has brought an excellent experience, undeniable. All controls in the game give fast response speed and no lag at all. In general, I am completely satisfied with the performance of iPhone 11 in the game Lien Quan Mobile.

In the last title and also the game with the heaviest graphics on today’s list, Call of Duty Mobile. When looking at the FPS chart in both iPhone 11 running iOS 14.4.2 and iOS 14.5, we can see that the device can completely handle it smoothly at 60 FPS during our experience.

Graphics settings in the game Call of Duty Mobile that iPhone 11 can be customized.

Thanks to that, the controls in the game, fighting each other, using props, … have no lag or lag. Generally speaking, playing Call of Duty Mobile on iPhone 11 running iOS 14.5, how smooth it is, guys.

Experience the game Call of Duty Mobile on iPhone 11.

Summing up for the gaming experience on the iPhone 11 (after going to iOS 14.5), I found the device just got a little warmer, not too hot like in iOS 14.4.2. This shows that this update of iOS has helped the device control the temperature better, while avoiding a quick battery drain.

After playing the game, I have also conducted a performance score of the iPhone 11 before and after the release of iOS 14.5 because the number will give us a more intuitive look. The results really surprised me and the following I will share with you: 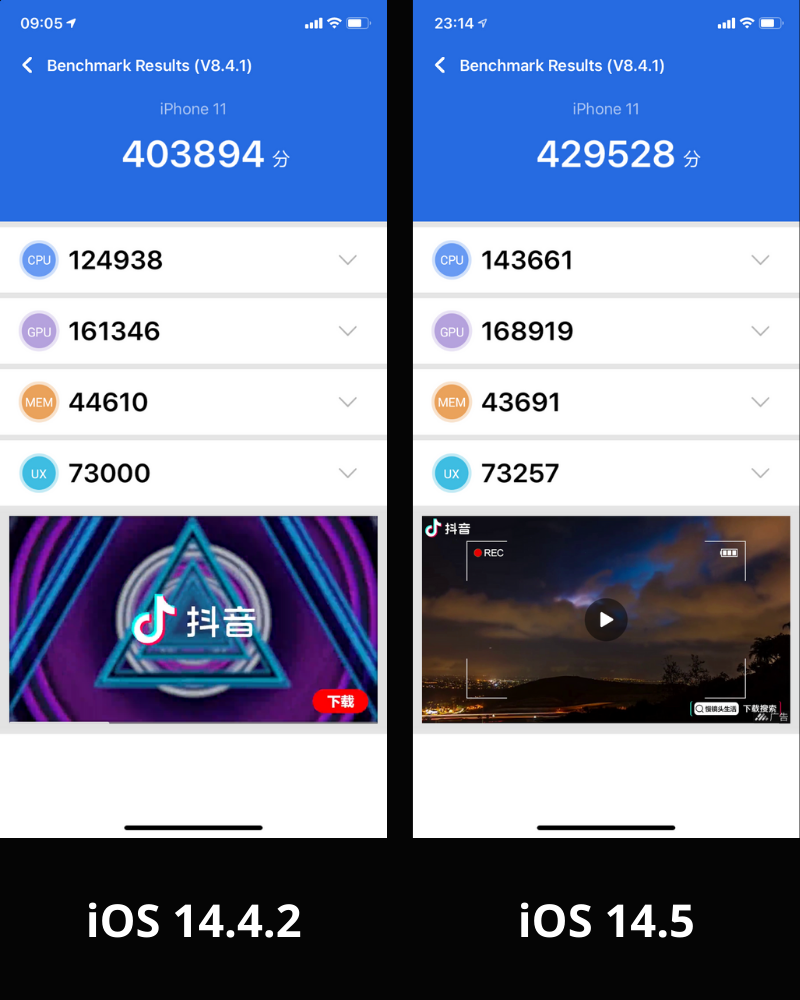 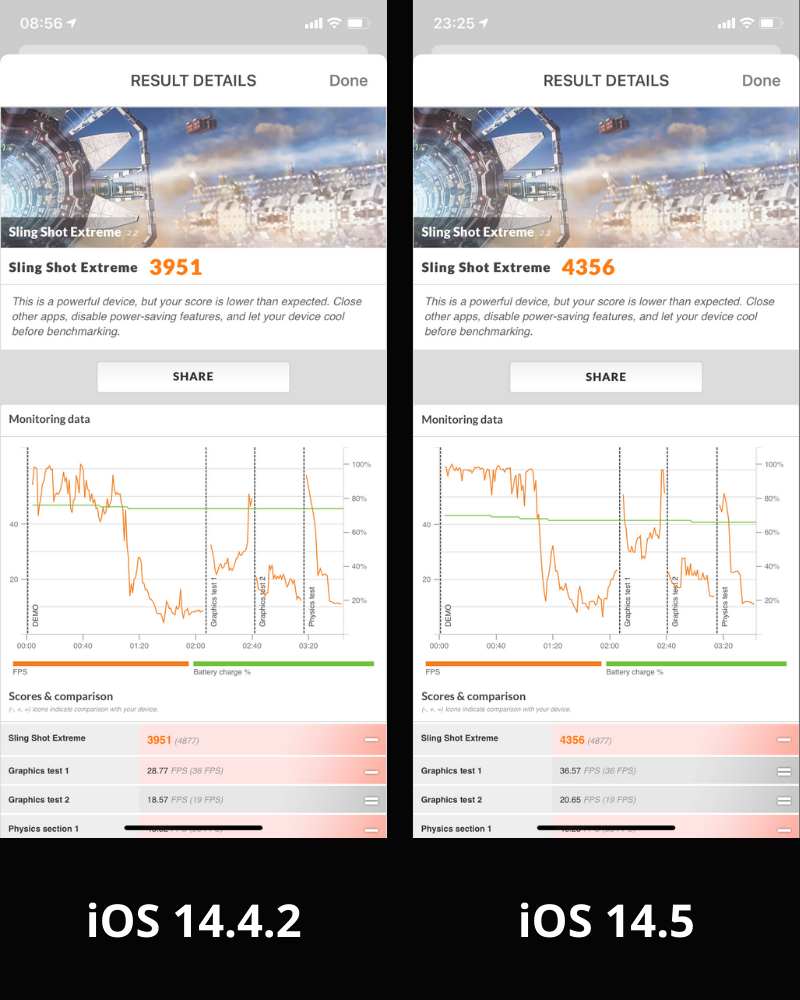 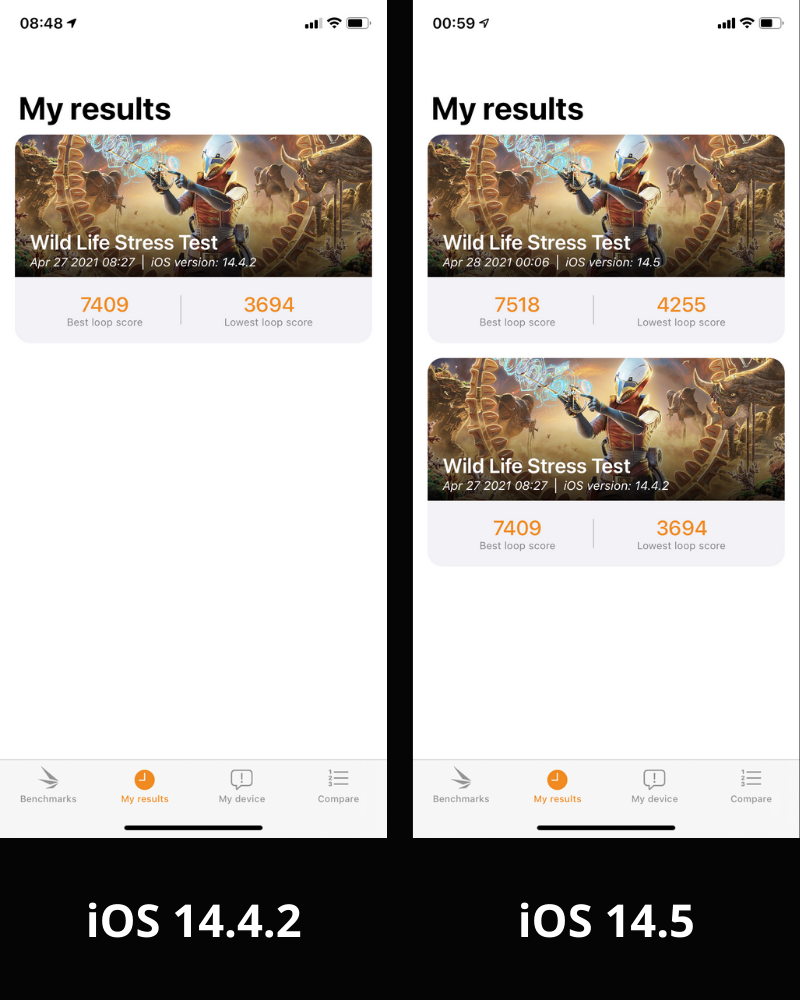 So in all 3 software, the iPhone 11 running iOS 14.5 has superior results compared to the old iOS version, why the actual gaming performance is so smooth. I was especially impressed with the results in the AnTuTu Benchmark software when the iPhone 11’s performance score (after the update) increased by nearly 30,000 points (429,528 points compared to 403,894 points).

I know the scores are for reference only, but these numbers all show that the performance of the iPhone 11 has improved significantly after reaching iOS 14.5. That is why you do not hesitate anymore, immediately update iOS 14.5 for your device.

The fast battery drain is one of the indispensable specialties every time the iPhone updates iOS, I know you guys are afraid of this problem and I personally am not an exception. To find the answer to the above question, I have measured the battery life on the iPhone 11 running iOS 14.4.2 and iOS 14.5 by using a battery test (according to TGDD standards). The specifics of this test are as follows:

And the results I obtained are as shown below: 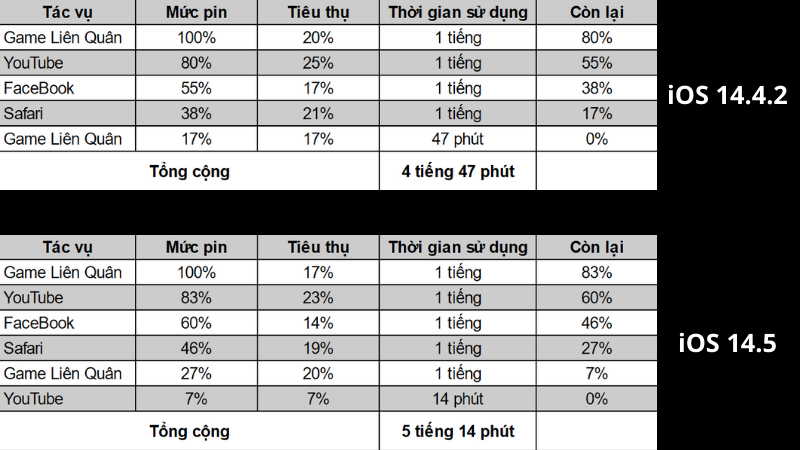 Granted, the test is a bit harsh, so I will share with you my actual usage process. Usually my iPhone 11 is always 100% full in the morning and I use it until about 4 – 5 pm to charge once, before going to bed to charge again. However, after going to iOS 14.5, I noticed that the device’s battery had a little buffalo, instead of charging twice as usual, now I just need to charge the device before going to bed.

The article is still being updated and will be finalized on April 29. Have you remembered to it! 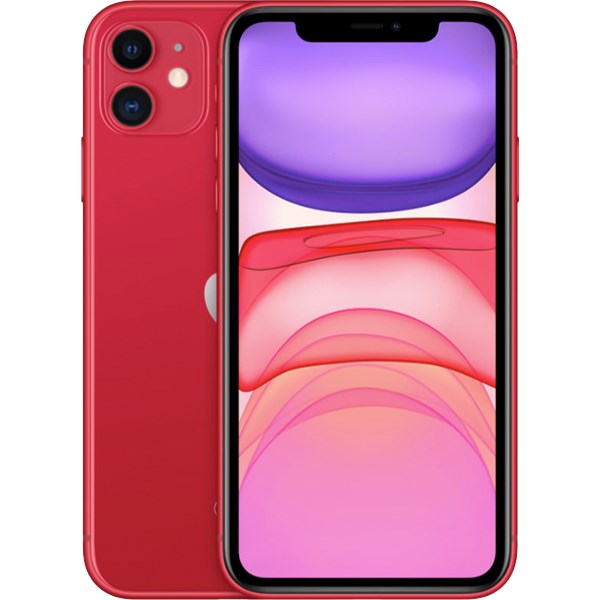