If you are interested in 2-in-1 laptops, the HP Specter x360 is one of the options to consider. It not only satisfies the needs of a normal laptop, but it can also be transformed into a tablet to serve various business and entertainment needs in a flexible, easy way. Easy to take with you wherever you go.

Following the success of the previous generation, the HP Specter x360 (2017) laptop was launched by the US computer brand with design and performance improvements, a large 15-inch screen and a highlight of the ability. rotate 360 ​​degrees. This is a sleek laptop, a good 4K screen, and a long battery life.

This review is compiled from VnReview LaptopMag and some other sites to give you the fullest view of the HP Specter x360 2017.

The upper case of the device is made of a light texture similar to that of the Macbook, which has good fingerprint resistance. New HP logo stamped in the middle to create accents. This case is covered in a dark gray bronze color that makes a difference from the silver color last year and similar products on the market.

The lid is smooth and hard to hold fingerprints, the new HP logo creates a highlight

The sides and front edges of the device are flat and shiny more copper than other areas, the back is curved. With a 360-degree reversible hinge, this laptop can transform into a tablet quickly. 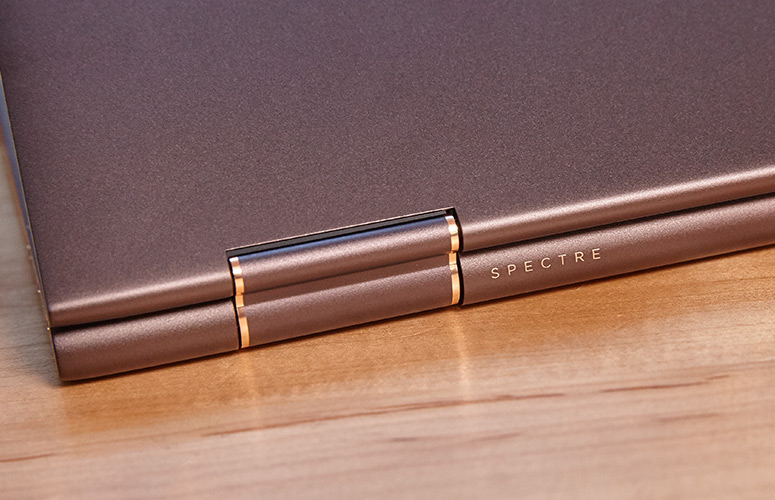 HP is continuing the trend of streamlining the ports on high-end devices, but overall the Specter x360 still meets the necessary connectivity functions. The left side of the machine has a USB 3.0 port with the ability to charge the phone even when it is in sleep mode (Sleep-and-Charge), a 3.5 audio jack and an SD memory card slot. 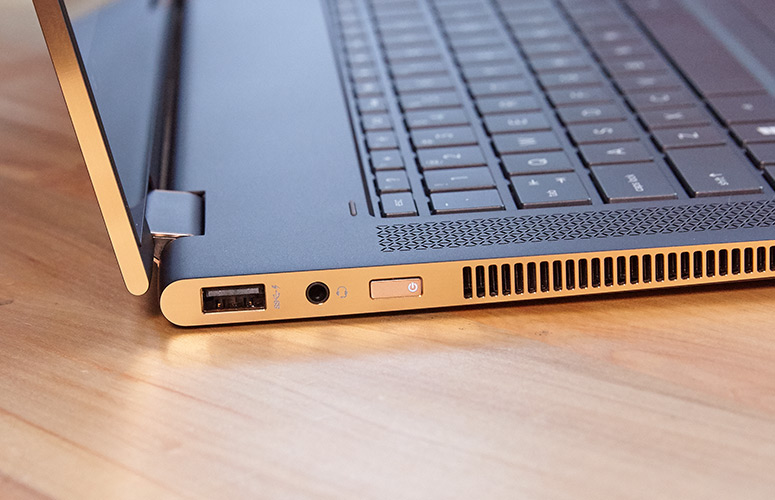 On the right side, there is a USB Type-C port with the ability to convert data, charge the battery with other devices and also a laptop port. In addition, there are 1 Thunderbolt 3 port and 1 HDMI port. HP says its fast charging technology can recharge 50% of the battery in just half an hour. 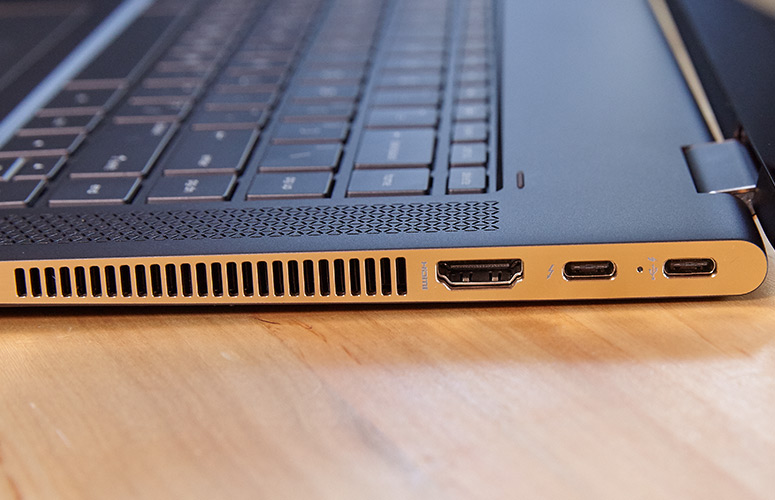 This year’s Specter x360 model has a larger screen than last year’s generation. The screen size of the 15.6-inch device resolution up to 4K and still inherited the impressive design of the Specter model last year. The screen is placed inside a layer of tempered glass spilling over the edges and the glass is pressed very close to the display panel to make the image more solid. The bezels on both sides are also very thin, making the screen more spacious and feels bigger than the 15.6-inch figure on regular laptops.

Actual use shows that the vibrant colors of the Specter x360 are not always accurate. This is more evident when measuring with a dedicated tool. The screen has a Delta-E color accuracy score of 3.5 (0 is ideal), higher than the average (2.4) and much higher than Yoga (0.8), Inspiron (0.9 ) and Notebook 7 Spin (1.8).

The keyboard on the Specter x360 is Island-type with keys located separately, striking the surface. The journey of each key measured is 1.5mm – relatively short but it requires quite a slight press force, only about 50g makes the typing process prone to “bottom”. A longer key travel (from 2mm) would probably be more appropriate. Testing typing with 10fastfingers.com, the typing speed is a bit better than on the Acer E571 laptop but it is clear that the Specter x360 does not bring comfort to typing. 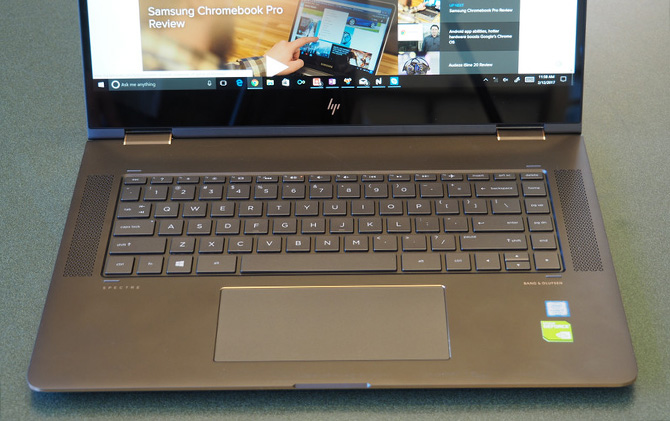 Comes with the stylus Active Pen so you can manipulate more accurately on the touch screen. The pen supports 2048 levels of force. On the pen body are two buttons that can be programmed with the HP Pen Control app to right click, take screenshots, change the computer’s volume and more. The stylus is a little thicker than the average of other stylus models and is comfortable to hold. Stylus pen makes writing, drawing, taking notes quickly on the Specter X36 much more convenient. Unfortunately, HP does not design a pen slot or integrate magnets into the pen body to easily attach the pen to the body like Samsung or Microsoft did. 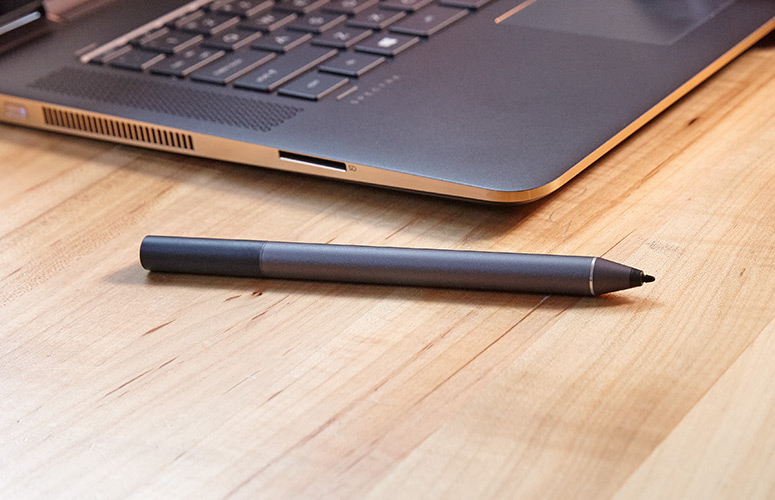 HP’s partnership with Bang & Olufsen continues to benefit the Specter x360. We have four smart speakers located on either side of the keyboard and two speakers on the bottom for the Specter X360 to provide an optimal audio experience in any mode. Especially when put the machine in reverse “V” mode or tablet mode, the machine will best promote the ability of sound filled with strong quality. 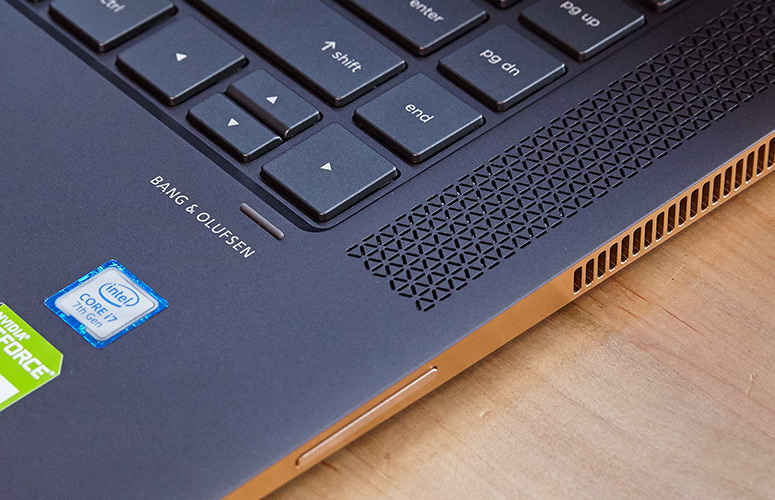 The two top speakers are on the sides of the keyboard

Turning on Justin Timberlake’s “Losing My Way,” the sound provided could fill an entire 15-square-meter room and the quality was balanced between the main vocal, accompaniment, and instrument. If you want the bass or treble to be thicker and stronger, you can adjust in Bang & Olufsen Audio Control software to make them smoother.

The HP Specter x360 has a 1080p resolution camera for decent average quality. Taking a few test photos at the desk, the colors and objects are displayed quite accurately and clearly. However, small details, such as hair, are hard to see. Basically, the camera of the device is temporary enough to meet video conference, video chat, live stream with not too high demand.

According to the test of Laptopmag, Specter took 3 minutes and 34 seconds to match 20,000 names and addresses in OpenOffice macro spreadsheet, equivalent to the Yoga model. Slower than average (4:22), as well as Notebook 7 Spin (4:03) and Inspiron (4:47).

Open 30 tabs in Chrome, one of which is streaming 1080p YouTube videos, the device still shows no signs of slowing down or there is a delay in operation.

Experimenting a bit with the game, using Intel HD Graphics 620 integrated graphics, Specter ran Dirt 3 at 29 frames per second on average at 29fps but still below the stable 30 frames per second. Even when using discrete graphics card Nvidia GeForce 940MX gaming performance is not much improved. Experiment with the game Rise of the Tomb Raider at the lowest graphics setting, the machine only reached 15.2 frames / sec, game lag lag heavy, hard to play.

Specter shows heat when used continuously for a long time. After 15 minutes of watching HD video from YouTube, the temperature measured at the touchpad was nearly 33 degrees Celsius, the center of the keyboard reached 36 degrees and the bottom of the machine reached 41 degrees. Meanwhile safety threshold at 35 degrees. 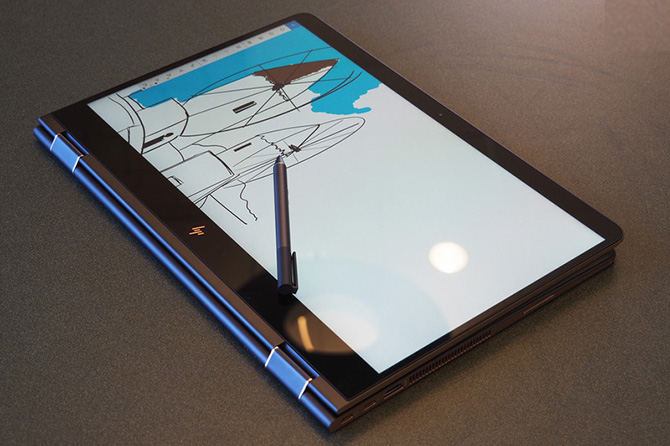 Despite the 4K screen, the Specter x360 has good battery life. In this year’s edition, HP has also focused on improving battery life for the Specter X360. Specifically, this computer ran for 8 hours and 36 minutes with the test of continuous browsing via Wi-Fi. Last year’s model with a 1080p display only lasted for 8 hours and 27 minutes. So this is an impressive improvement, the average of other laptops at 6h43p, specifically Inspiron 6h55p, Samsung Spin 7 inferior to 5h53p, but Lenovo Yoga 910 excels with time is 10h36p.

The 2017 HP Specter x360 comes with a range of software, including some HP proprietary software. HP’s Audio Switch makes it easy to convert audio output via HDMI. Orbit software is one of the most useful applications of HP, it’s quite similar to Lenovo’s SHAREit application to quickly send files and transfer images from your phone to your computer quickly.

We can see the HP Specter x360 2017 is a model with many advantages, that is 15.6 inch screen with 4K resolution, sharp performance, good battery life and quality speakers. However, it also has some minor drawbacks such as the slightly higher temperature during use and Nvidia GTX 940MX graphics are still only modest.

In short, if you’re looking for a 2-in-1 computer with a 15-inch screen, good performance, sophisticated design, high battery life, and the ability to flexibly switch between a laptop and tablet, the Specter X360 isn’t just is one of the best 2-in-1 laptops available today, which is even the best HP ever. This is a product that you should consider.

– Pretty hot to use

Dr Disrespects said that he would stay in Twitch

Post Views: 49 Microsoft is taking active steps to compete with Twitch. Mixer – Microsoft's streaming platform – has hired Twitch's most famous streamers such as Tyler "Ninja" Blevins and Michael "Shroud" Grzesiek. But at least one streamer said he would stay with the purple team, and that guy was Guy "Dr DisRespect" Beahm. While […]

Post Views: 78 Galaxy A10e is a shortened version of the Galaxy A10 launched at the end of last February. After a long time appearing as rumors, today, Samsung has officially unveiled a new smartphone, called Galaxy A10e. Compared to the Galaxy A10 man, this phone has a smaller screen size and battery capacity but […]