Similar to Galaxy A50, Galaxy A70 is also equipped with the following camera including wide-angle main camera, second wide-angle second camera and finally, a sensor that supports depth measurement to help capture images better, support for Live Focus, although the level of fake resolution has increased, in general, the quality and features do not change too much.

Regarding specifications, the following three cameras of Galaxy A70 include:

Compared to the Galaxy A50, the A70 has a slightly higher main camera resolution from 25MP to 32MP, and there is not much difference between the two. In terms of features, it can be said that the same, can not fully adjust the parameters like many other mid-range machines, the third camera used to measure the depth is not really necessary, instead if equipped with cameras telephoto like Xiaomi Mi 9 SE will be more useful. The front camera is also upgraded to 32MP.

About the ability to take pictures, Galaxy A70 for the quality is still very good in the price range with some advantages can be mentioned as fast, accurate focusing, colors taken from Samsung machines in recent years have been optimized for medium more real, more comfortable, not too bright as before. However, the ability to capture low light is still limited.

However, the super wide camera is only 8MP, so the detail is not high, the color is not as good as the main camera.

Ultra-wide camera has an angle of up to 12mm, very wide. Although the quality is not really good, it makes it easy for users to capture difficult angles, architecture or travel. The image distortion error is also fixed by default with the software of the device. 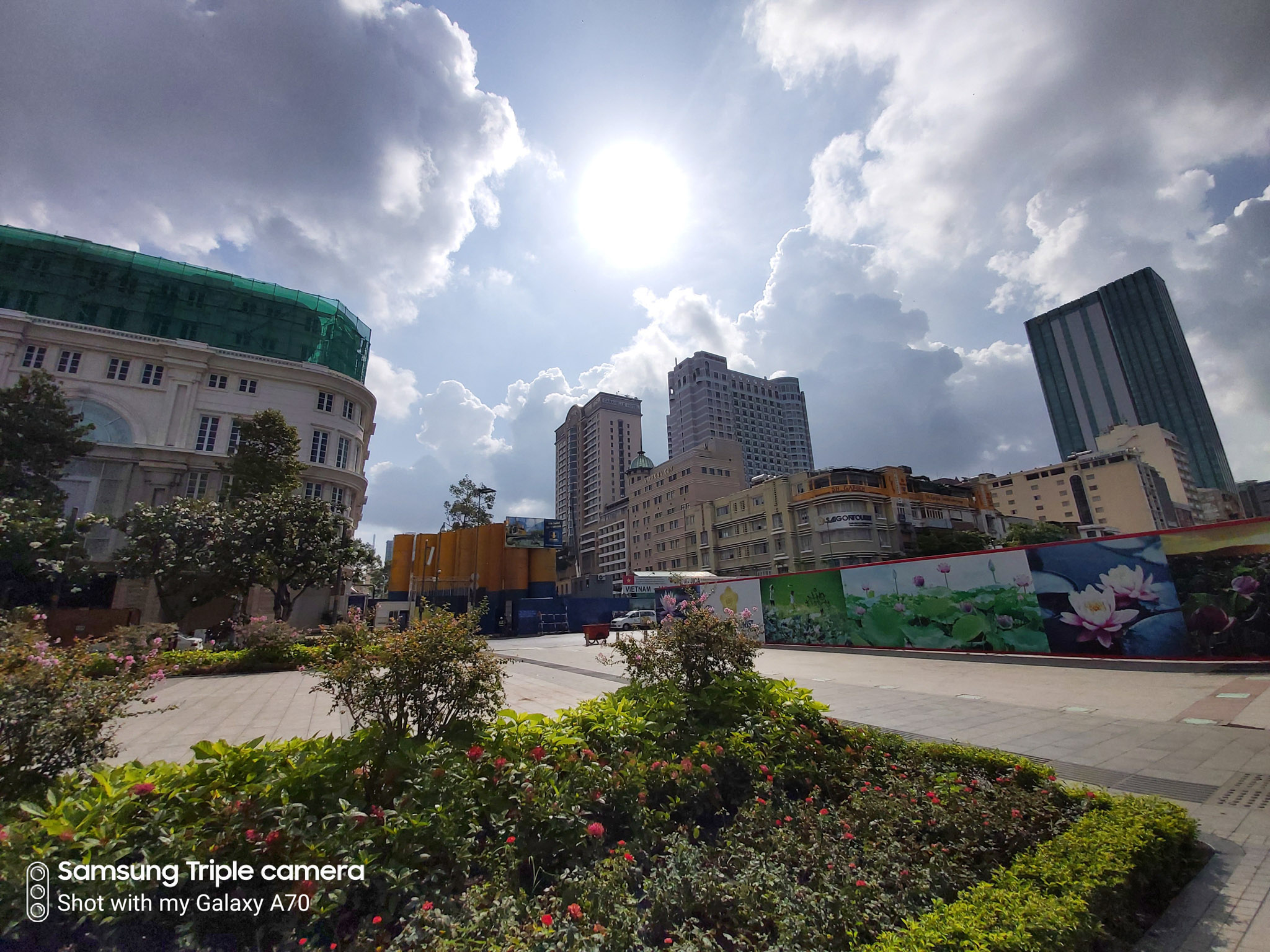 Good HDR processing, the image above captures the sun directly, but the surrounding details such as clouds, sky and details below retain enough detail. 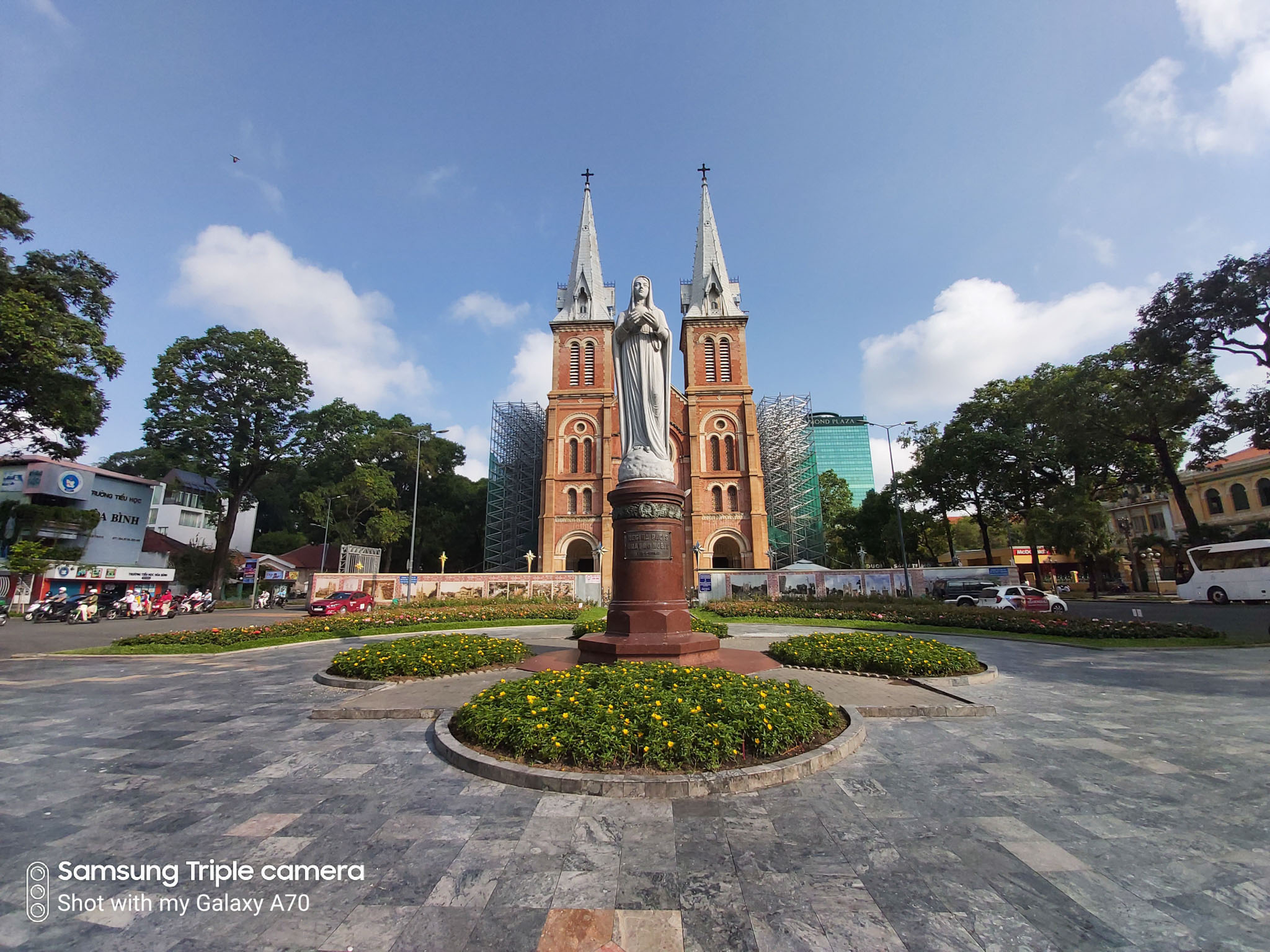 The colors are no longer so bright, especially the sky has been much more honest than the Samsung generations a few years ago. Photo taken from super wide camera.

Some other photos taken in bright conditions: 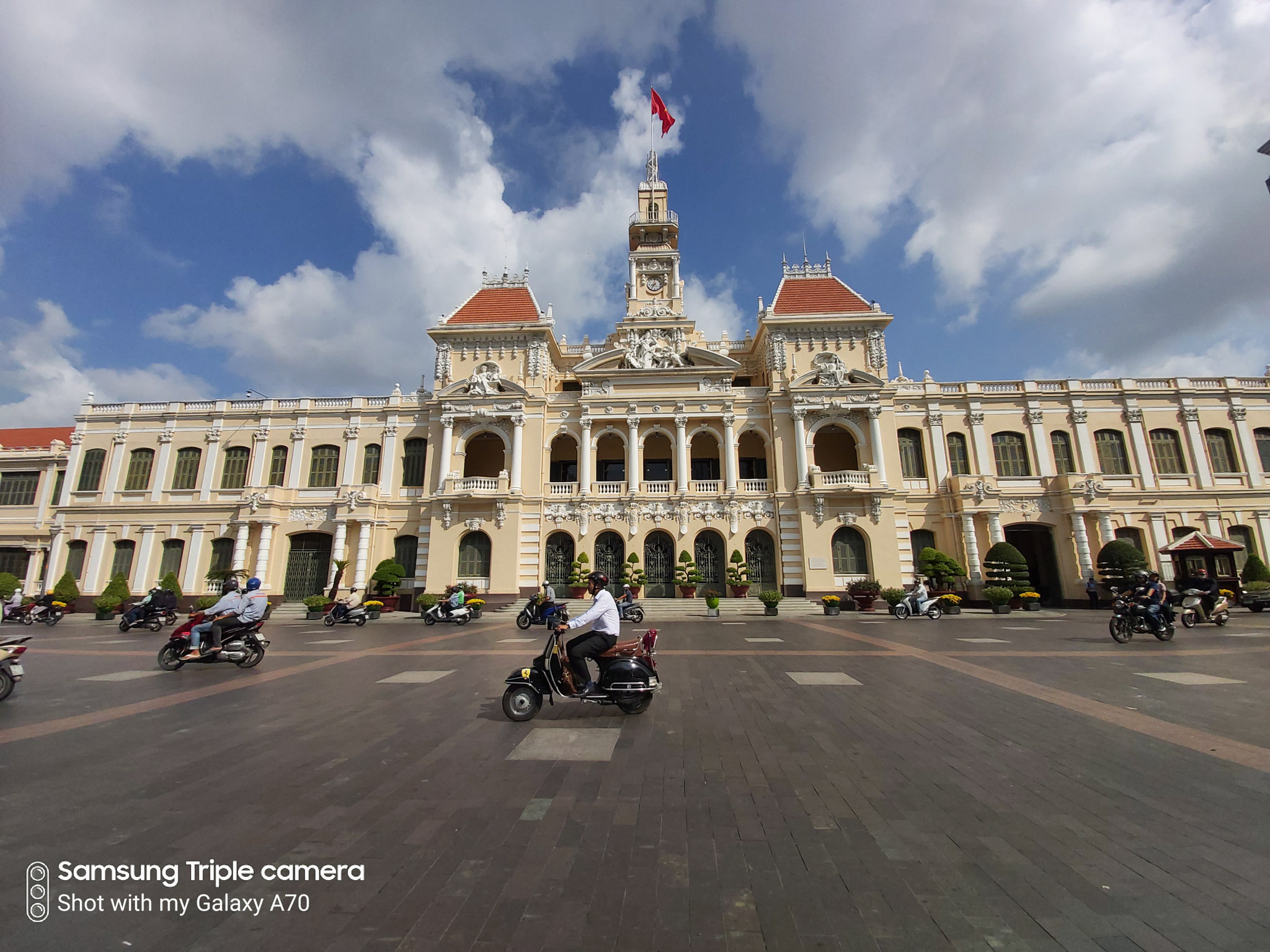 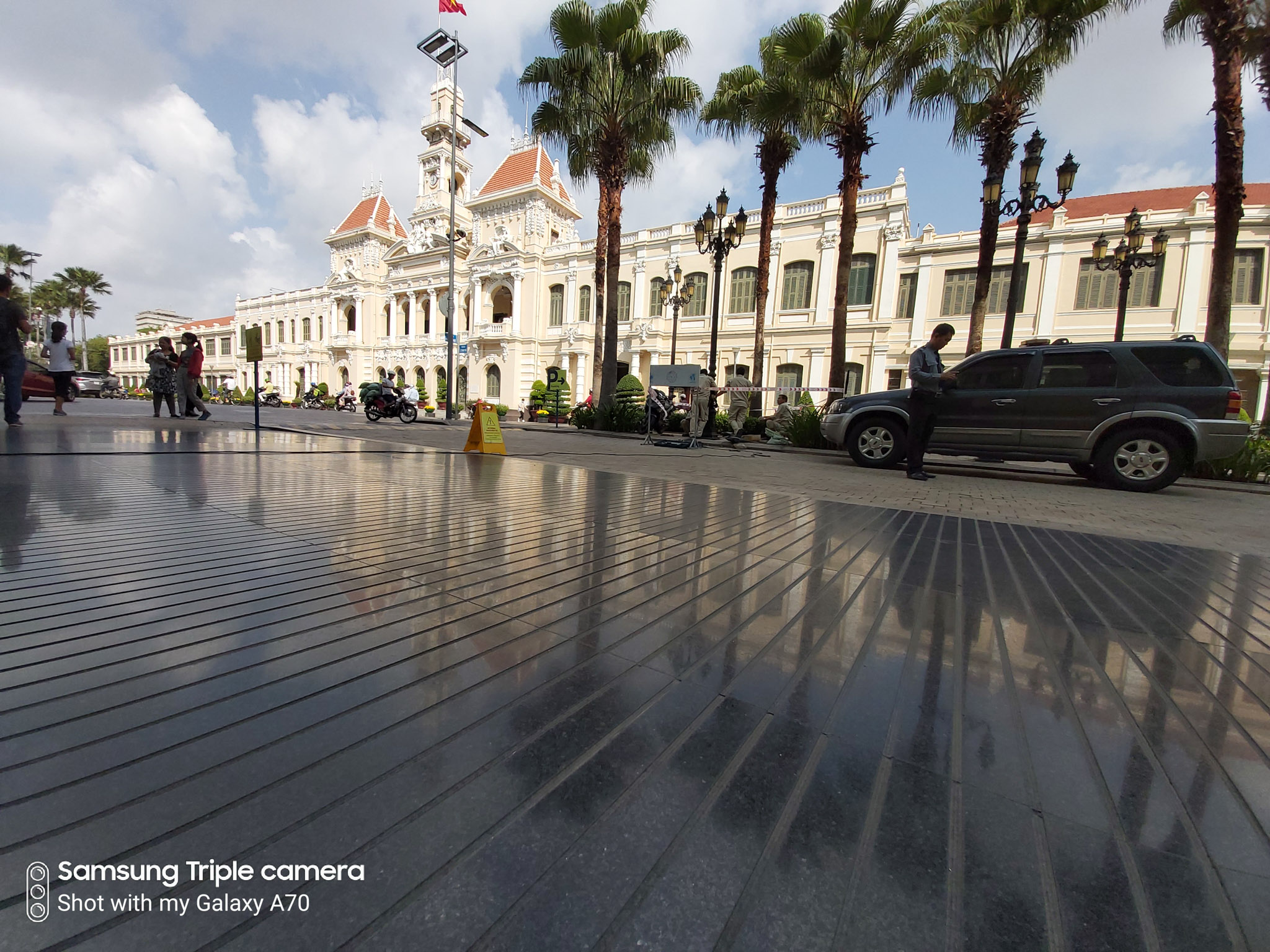 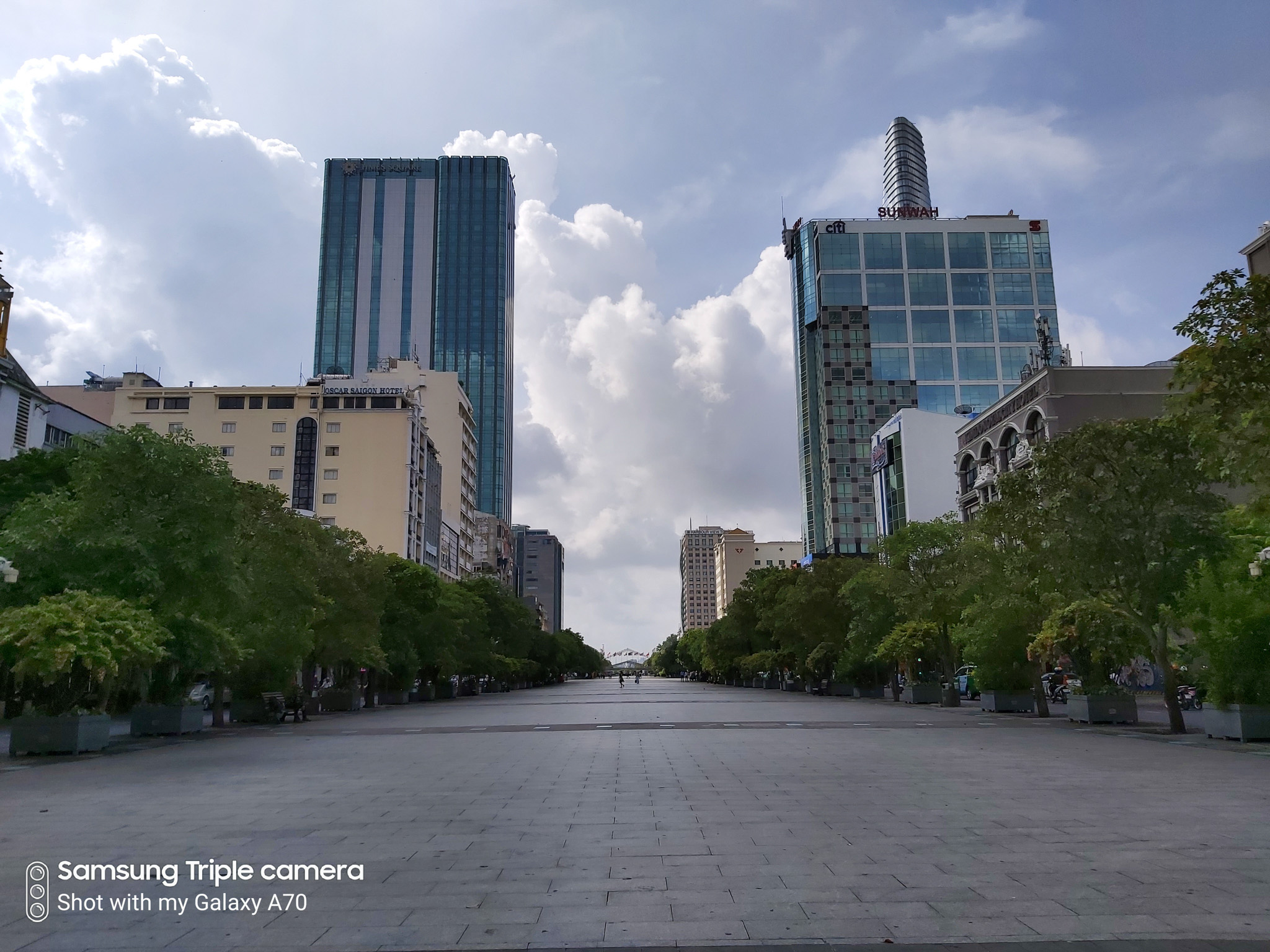 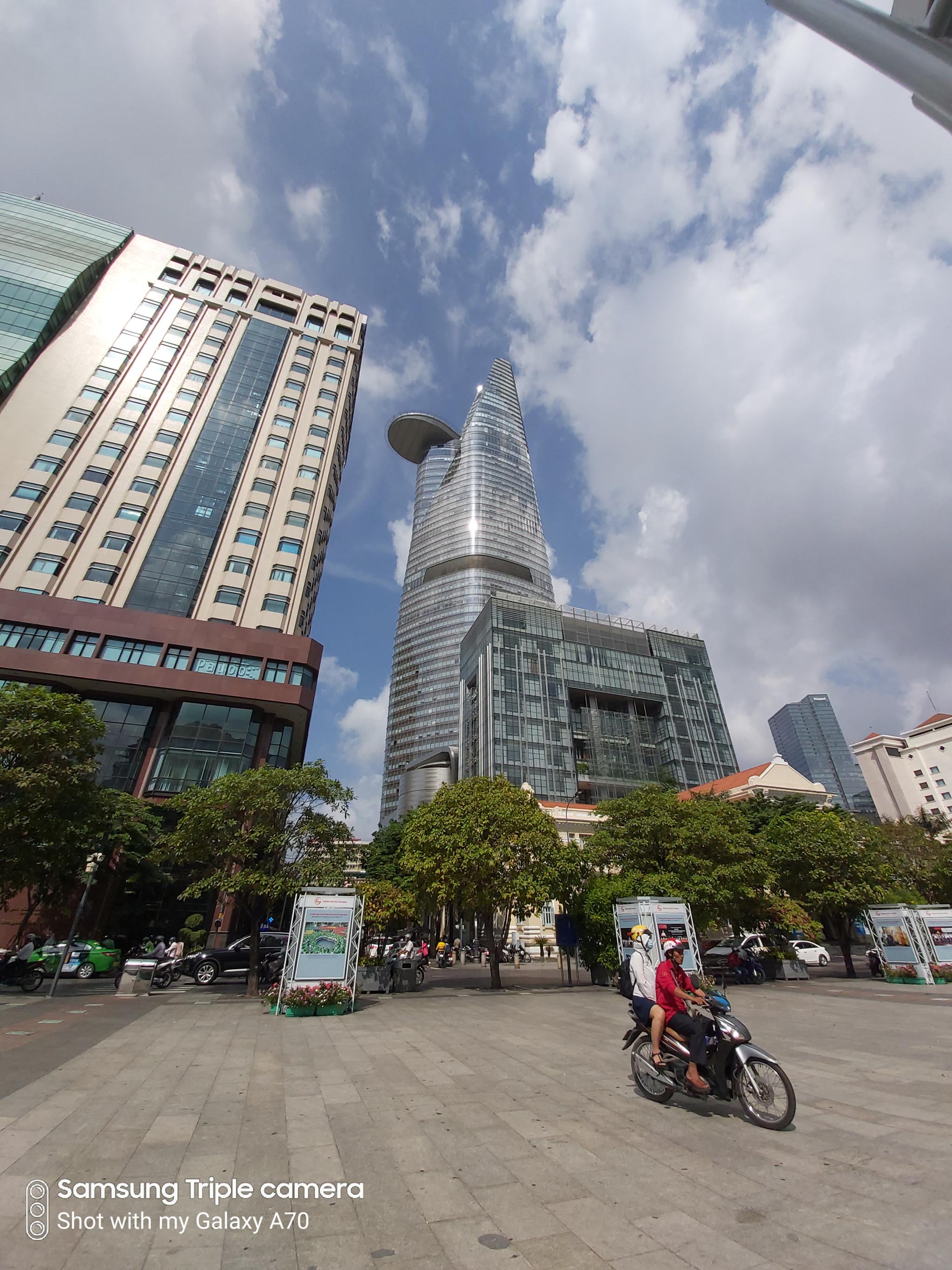 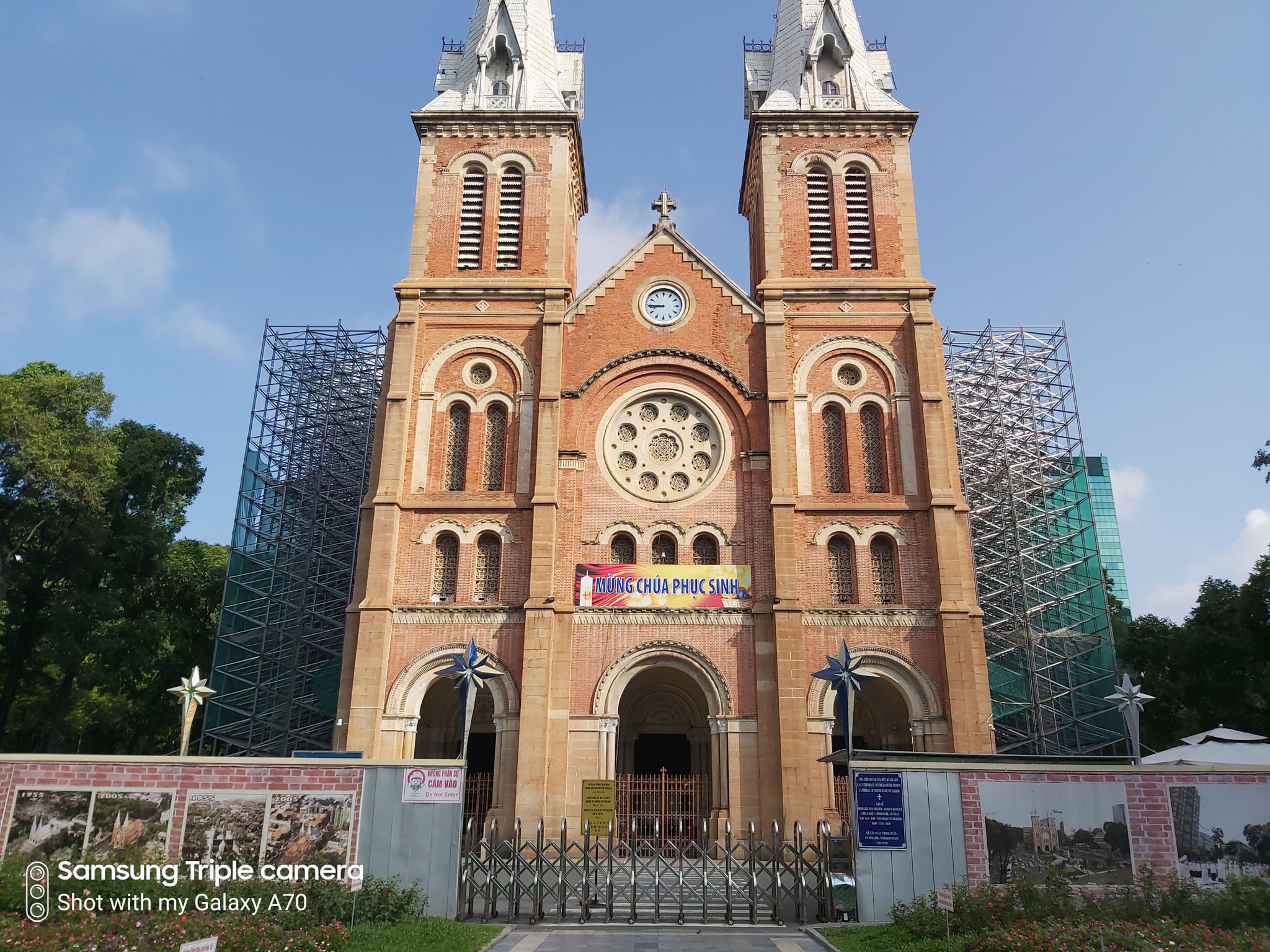 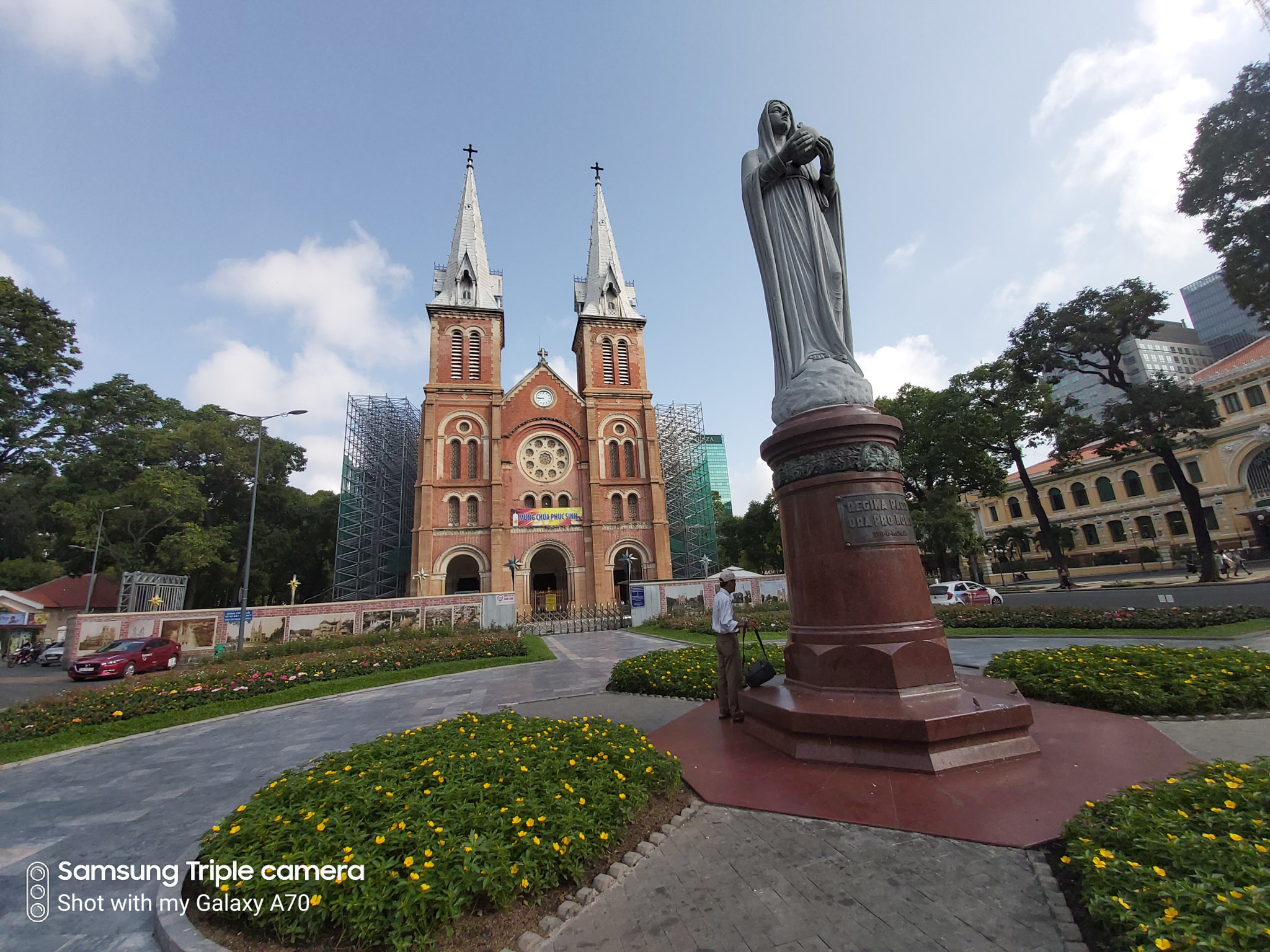 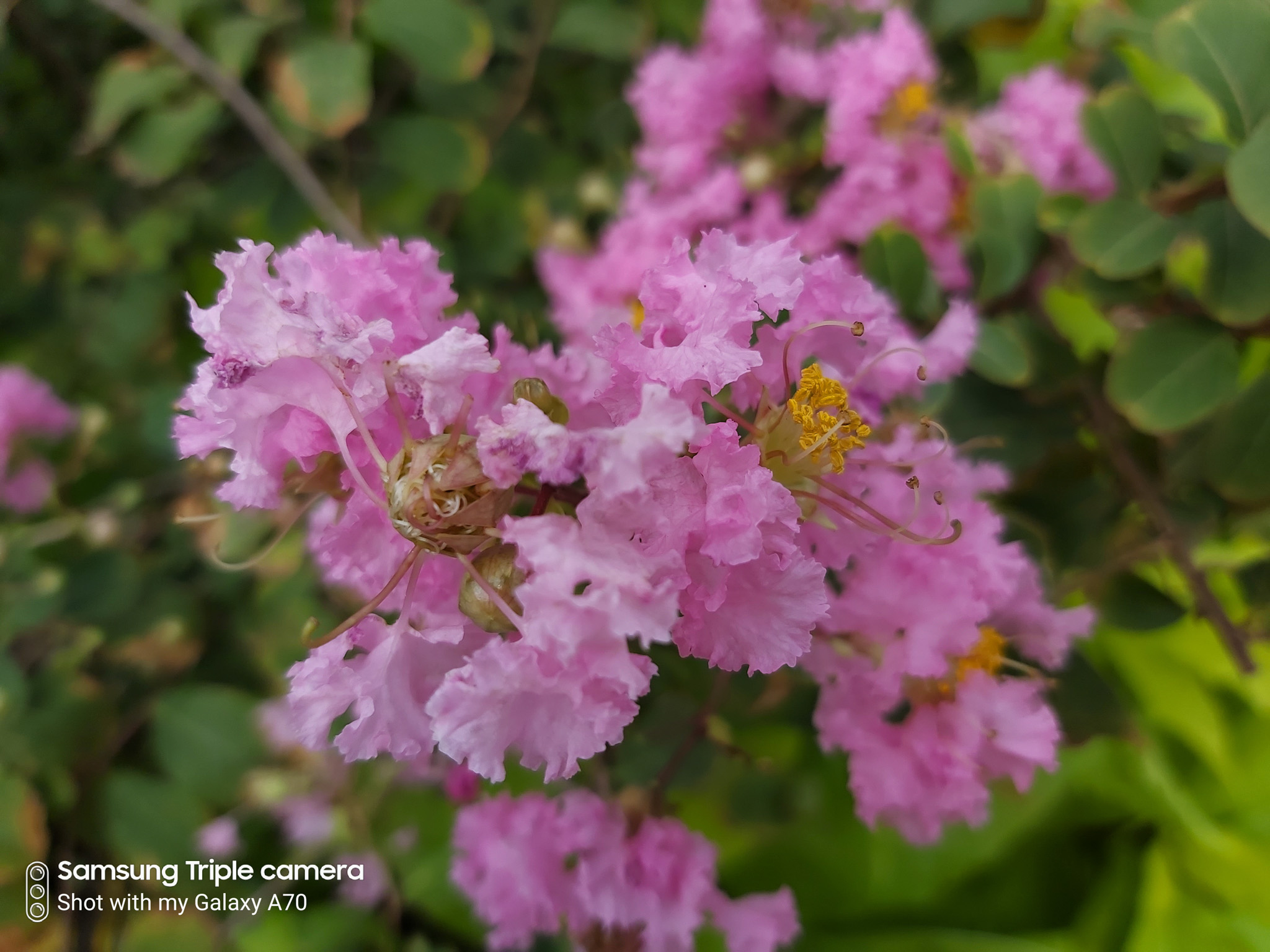 In bright enough conditions, what the Galaxy A70 does is commendable. however, when shooting in low light, the image is quite stubborn, prone to flicker due to Samsung's low shutter speed. The machine is not capable of exposure – this is also a limitation compared to many other smartphones in the segment.

Photos taken from the main camera and super-wide camera in late afternoon conditions, the sky started to darken. Photos for details are not high, dark areas are back. Because the shooting speed is low, so when the subject in the image is like a person or moving objects will blur. 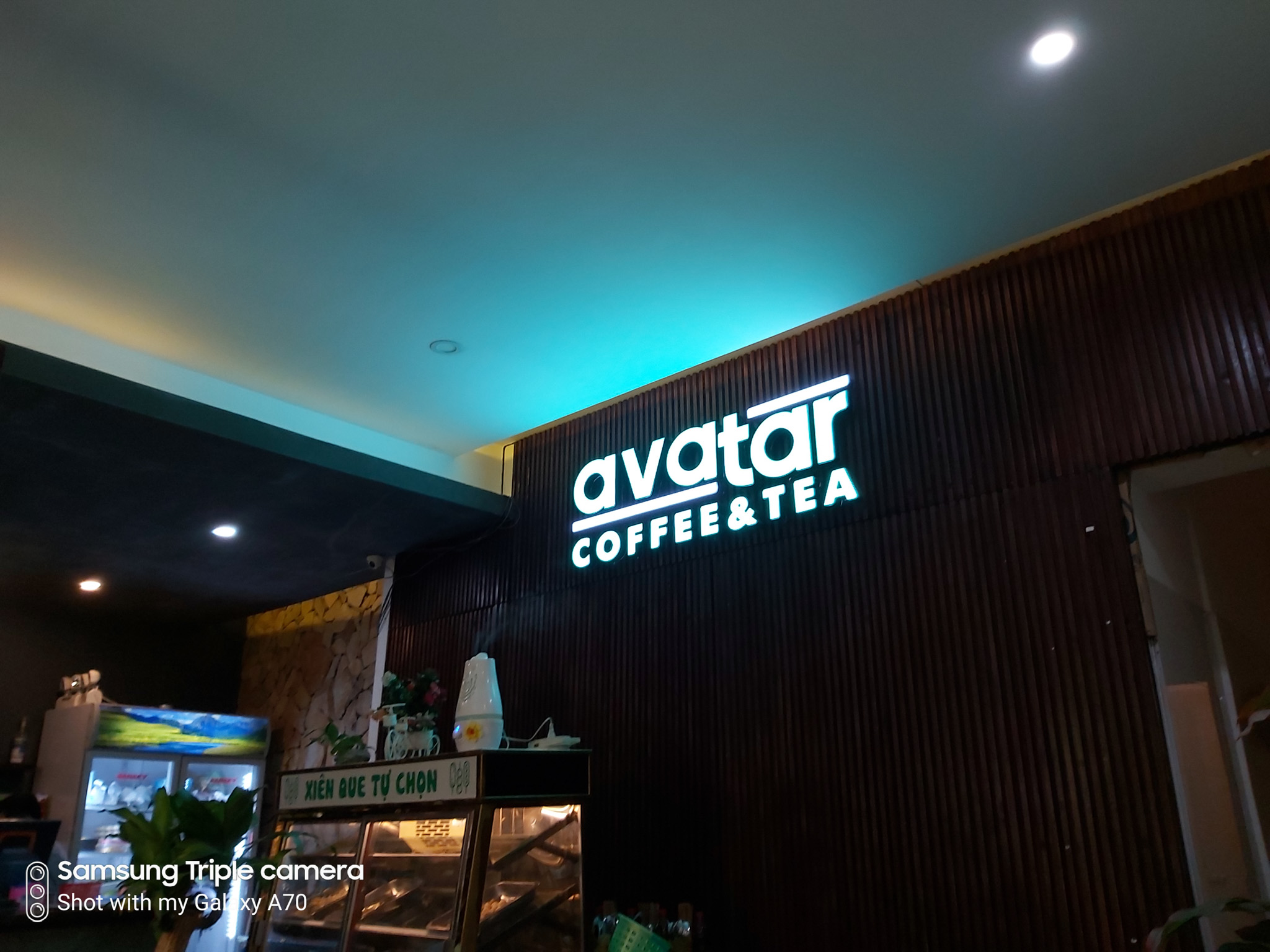 In return for the low light shooting capability, the Galaxy A70 gives the ability to capture fonts and selfies quite well thanks to the rear depth camera as well as the high-resolution front camera. 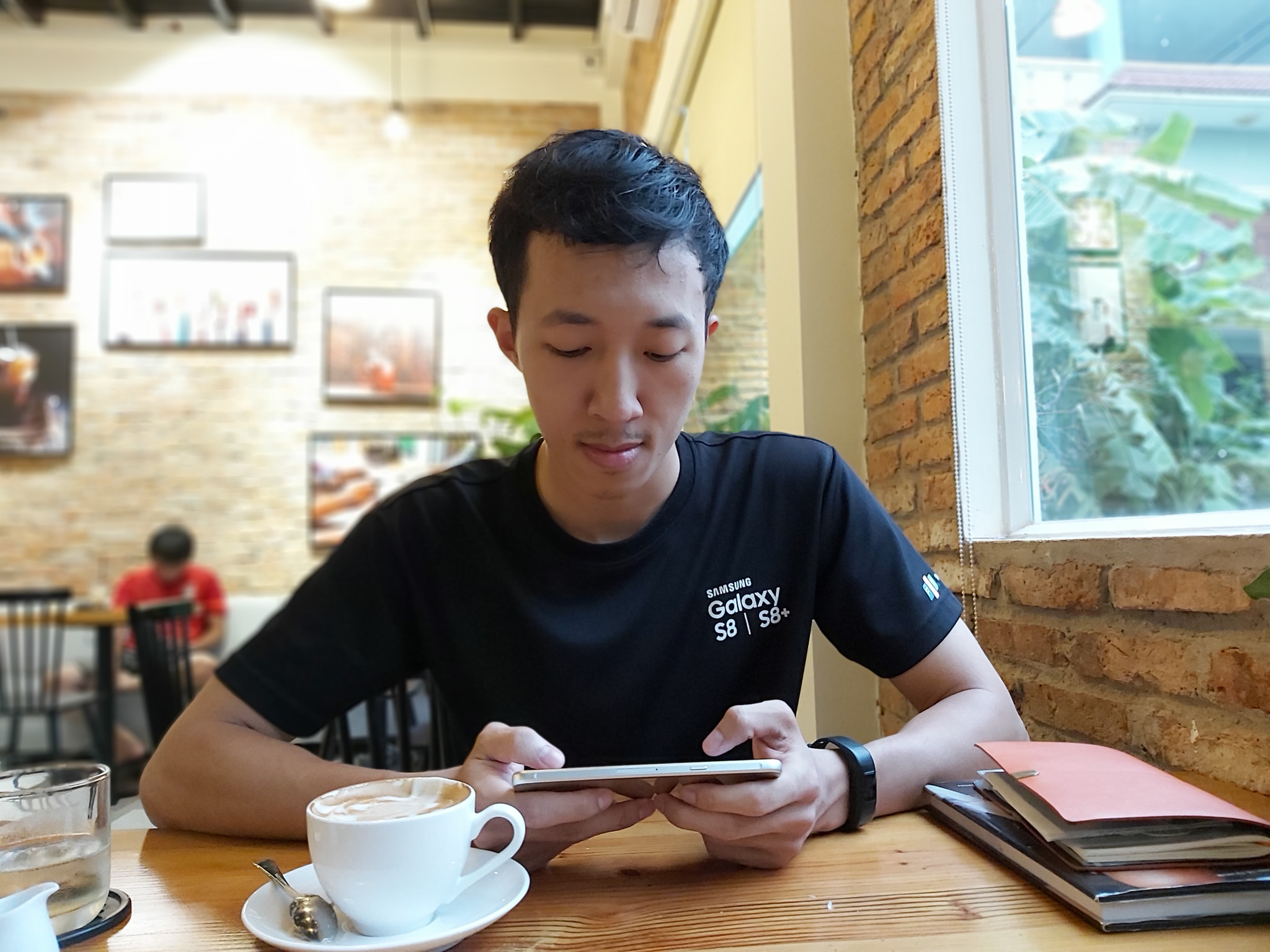 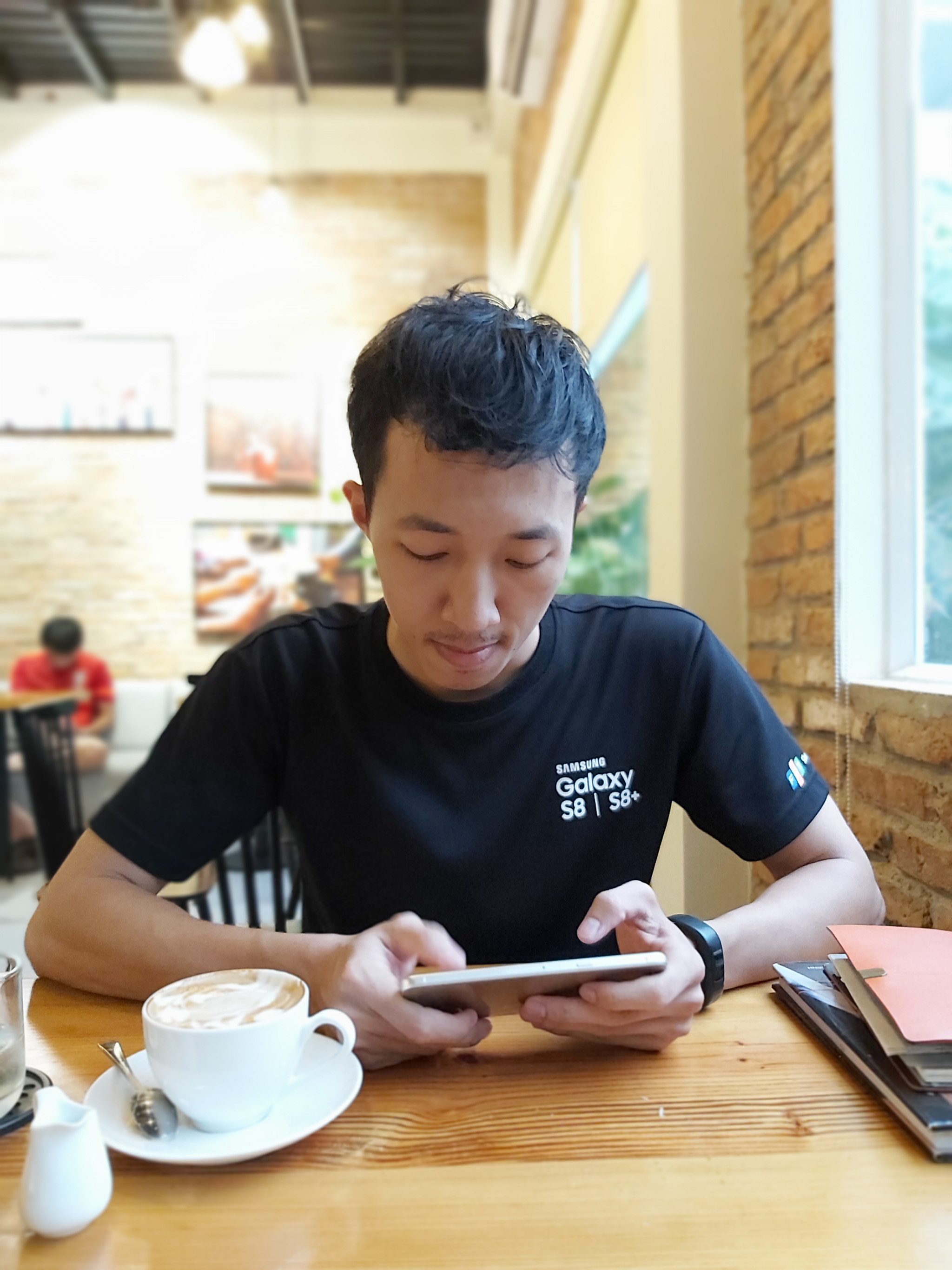 The details are erased smoothly, the font deletion has a distant level, not deleting everything like some other products.

Live Focus customizes the level of font deletion in different levels as soon as shooting. 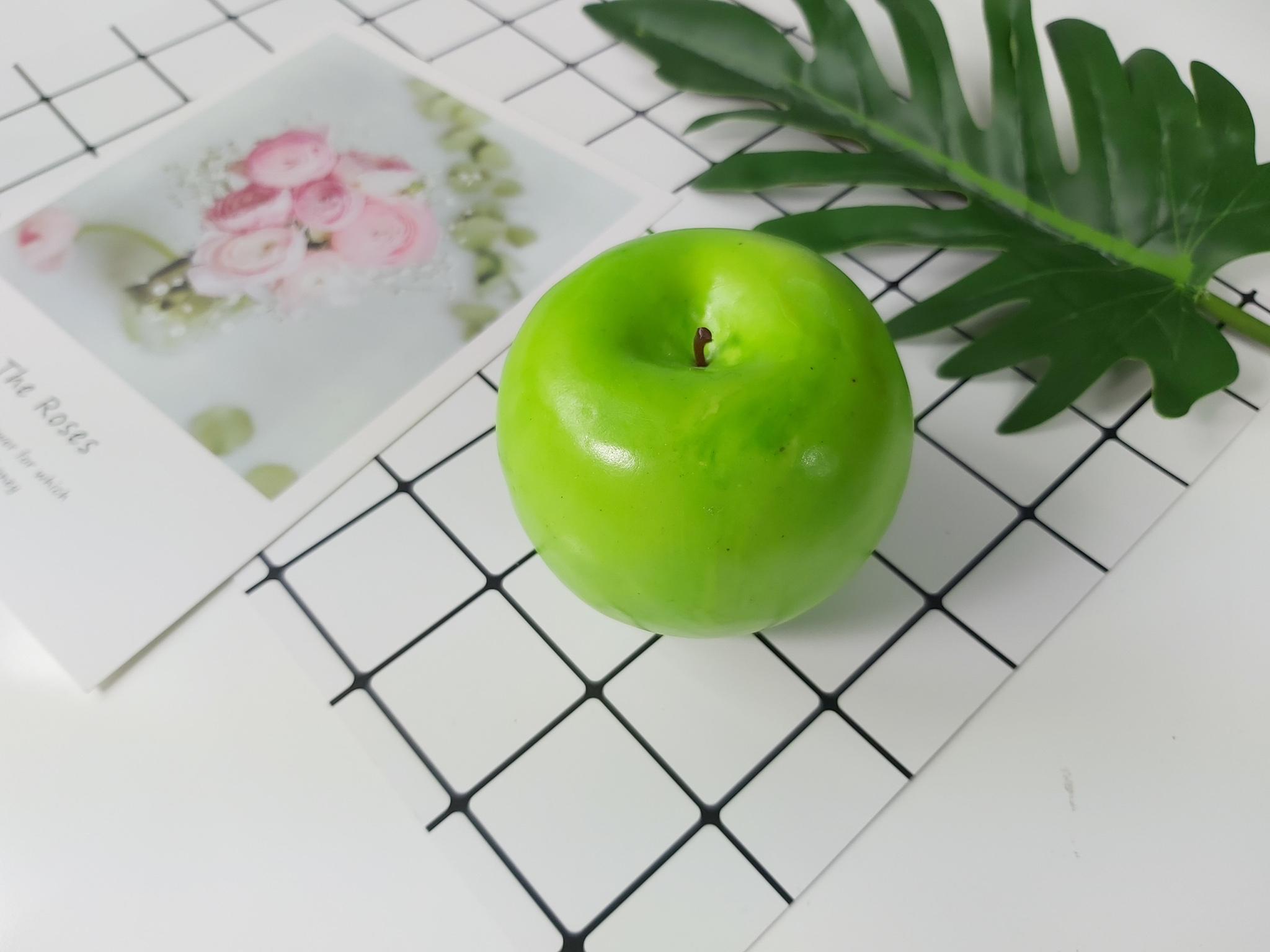 In low light conditions, erasing fonts is still very good but of course the quality will be reduced due to the image being worn

However, the feature is still like Galaxy A50. The machine's context optimizer is just like the automatic mode, not with the effect options like on the Galaxy S10.

In general, with the price of more than 8 million VND after applying the promotion, Galaxy A70 gives good image quality in the segment but not outstanding. Compared to Galaxy A50, it doesn't change much, in return, it has other interesting features such as 25W fast charger, Snapdragon CPU, big screen, larger capacity battery.