In recent years, touch-screen laptops have become increasingly popular, along with the advent of hybrid devices that can be detached from the keyboard for personal use like tablets and when needed again. can turn into a handy laptop.

Lenovo also has such a hybrid product line called MIIX, with the latest representative being the MIIX 3 that was introduced at the end of 2014. The biggest difference of MIIX 3 compared to the previous generation is the keyboard. Integrated into a protective case just like Microsoft Surface accessories, so it can fold in both directions of the machine. Thus, MIIX 3 can both be used as a tablet and quickly “transformed” into a laptop for office work.

The device also comes with Windows 8.1 pre-installed with some improvements compared to Windows 8 on MIIX 2. Lenovo MIIX 3 has a retail price of VND 8.99 million, equivalent to a fairly configured laptop on the market. school now. 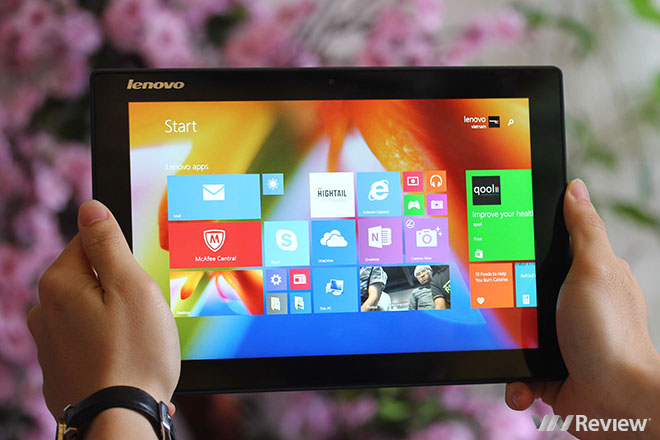 MIIX 3 is a bit heavy, so using it for a long time will be a bit of a strain

MIIX 3 has a 10.1-inch screen, 16: 9 aspect ratio, so it is a bit long if held vertically. In return, when used horizontally, especially when watching movies will “have” more eyes with tablets with a 4: 3 square ratio like iPad. The body is about 9mm thick, gradually thickening towards the tail (the part attached to the touch keyboard). The front of the device has no buttons but only the touch screen with a moderate border. The back is made from smooth plastic. This product only has a front camera with 2MP resolution for video calling, no rear camera.

The Miix 3 has a slightly heavier weight compared to tablets, the weight of the body alone is about 550g. However, when attaching a protective case to turn into a laptop, this machine weighs about 1kg, equivalent to a netbook (small laptop), so it is still convenient to carry with you. Using MIIX 3 in tablet mode to browse the web, surf Facebook will need time to get acquainted due to its size and weight, but if switched to laptop mode, the machine quickly responds well because of its compact size.

Unlike Android and iOS tablets, which often have limited ports, Windows tablets have a wide variety of ports. Specifically on MIIX3, in addition to the headphone jack, the familiar MicroUSB port (with OTG support to connect to peripherals such as mice, external hard drives, USB), the machine also has a Micro HDMI port to output images. Large screen or projector and MicroSD card slot supports up to 64GB capacity to expand storage memory. 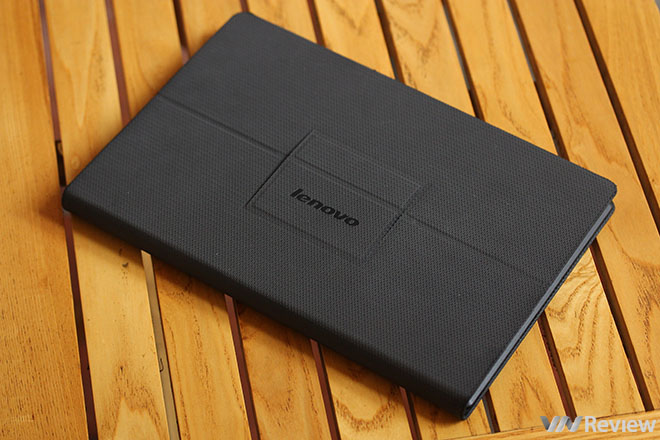 The protective cover is made of plastic material that clings on hands, very good anti-slip

The protective cover and keyboard of the device are covered with a floating plastic layer, which helps to hold the hand and not be fingerprinted like the body and very good anti-slip. This shell also has a stand to support the machine when placed on the table, so it is quite solid. However, it only has a single opening angle of about 30 degrees so it is not as flexible as a laptop. 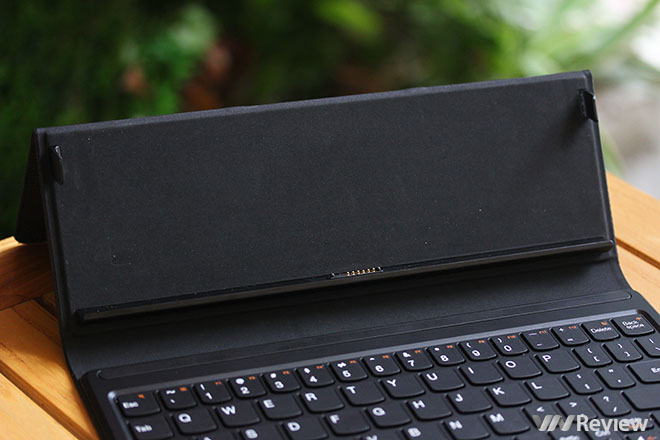 The protective case has two very strong mounts so the user can be assured of the certainty. Due to the sacrifice of lightness, the keyboard / case of the device does not have additional features such as adding batteries or connecting. In addition, when attached to the case, the mount holds the MicroSD card slot, so it is a bit inconvenient to remove the card. 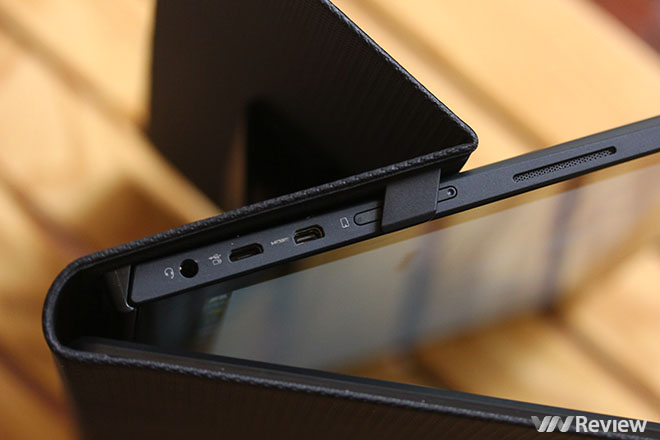 When attaching the cover, the MicroSD card slot is hidden

In general, if in tablet mode, MIIX 3 has a similar design to other Windows tablets and does not have many outstanding points. But when combined with the keyboard and cover to “transform” into a laptop, MIIX 3 proved to be an interesting device by taking advantage of the Windows operating system dedicated to the mouse and keyboard. The protective case also makes it easy to place the device on a table top to watch movies or slide shows. 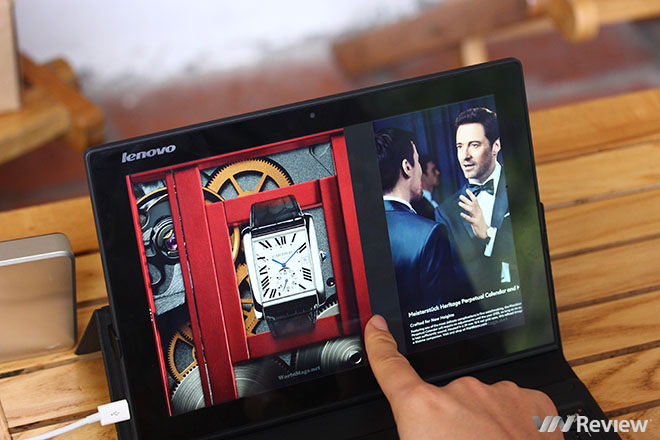 The screen of the MIIX 3 is 10.1 inches wide with a resolution of 1920 x 1200 pixels with a pixel density of 218 ppi. This pixel density is quite good, not too high but still retains sharpness when used because with the tablet you will look at a much further distance than a smartphone. Viewing angle of the screen is relatively wide, when viewed at angles, the contrast is not changed much and the colors displayed are quite good. The maximum brightness of the screen measured is 243 nit, slightly lower when used as a tablet. The maximum brightness is not high combined with the screen is glossy, so when used outdoors will find it a bit difficult to see. 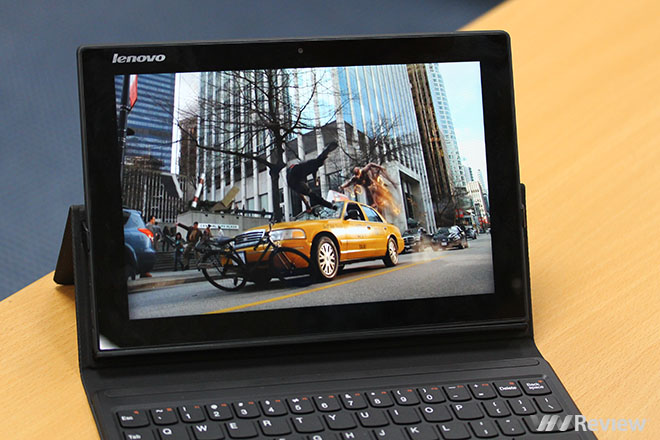 Because there is only one speaker, the sound when watching movies or listening to music will not be “as” as the laptop has two speakers

The loudspeaker of the device is quite loud, enough to hear in a room of about 20m2 or when the surroundings are not too noisy. But dThere is only one external speaker on the left side so when using MIIX 3 you can notice the sound of the transmitter is skewed, a small disadvantage compared to current laptops and tablets that usually have two speakers placed at the same both sides of the screen.

Most hybrid products such as the MIIX 3 have a modest configuration, using the optimal processor for battery life and operating temperatures like Intel Atom. MIIX 3 possesses a configuration set of Intel Atom Z3735F quad-core processor at 1.33 GHz (can be increased to 1.83 GHz), 2 GB RAM, integrated Intel HD Graphics at 311 MHz (can accelerate) up to 646 MHz), 64 GB memory with external microSD card support up to 64GB. 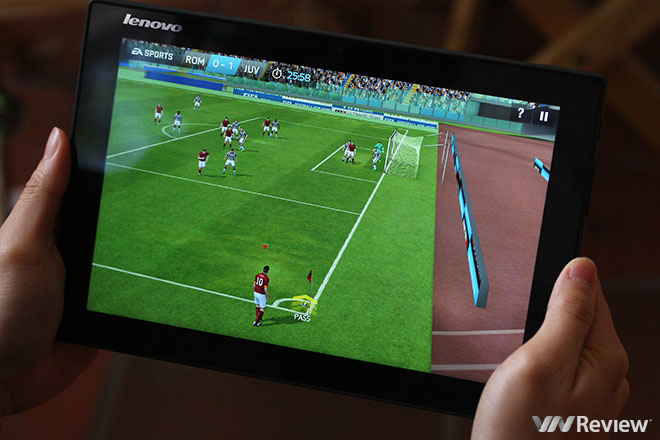 However, when you have to try the game with a bit more advanced graphics like Asphalt 8 or FIFA 15 Ultimate Team, Lenovo’s tablet met quite hard, especially with games using touch screen. application or need to tilt the machine. Overall, Lenovo MIIX 3 is suitable for light, basic office and entertainment tasks. If you want to handle more complex tasks like editing photoshop, editing movies or experiencing heavy graphics games, you will need a more powerful machine.

Besides performance, the user experience of Windows 8.1 tablets is also very different from the iPad or Android tablets. On the Metro interface, Microsoft and the developers have provided a lot of applications designed for touch screens, but it can be said that it is not comparable with the other two operating systems in terms of diversity and application quality. .

When it comes to the desktop environment, things are different. The touch screen is not suitable for very small icons of Windows, and the operation is also very different (for example, to open an icon on other touch devices you only need to touch once, but with Windows will have to touch twice). For comfortable use, you should combine it with a keyboard cover.

MIIX 3 keyboard has a familiar design of Lenovo, the letters and numbers keys are standard size so quite easy to type. The armrests are reasonably sized, enough to place your hands comfortably. Feeling good typing, though a thin key type but the key travel long enough. For office work, this keyboard responds quite well. 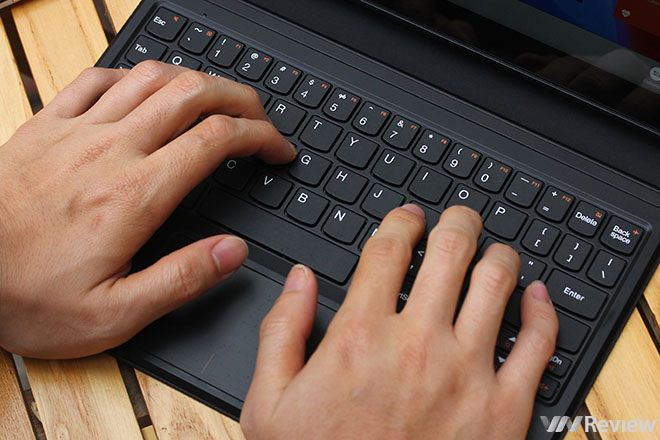 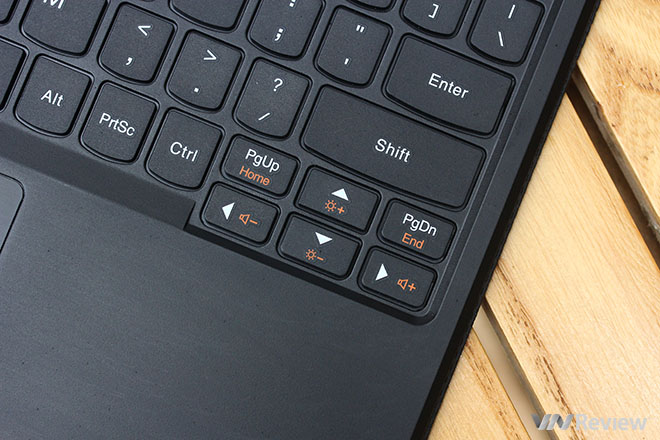 However, Windows 8.1 does not solve the combination of virtual and physical keys well. In the Metro interface, if a hard key is not attached, the virtual keyboard will automatically appear whenever data is needed; However, in the Desktop interface, you have to manually press a button on the Taskbar to turn on the virtual key, which is not very convenient. 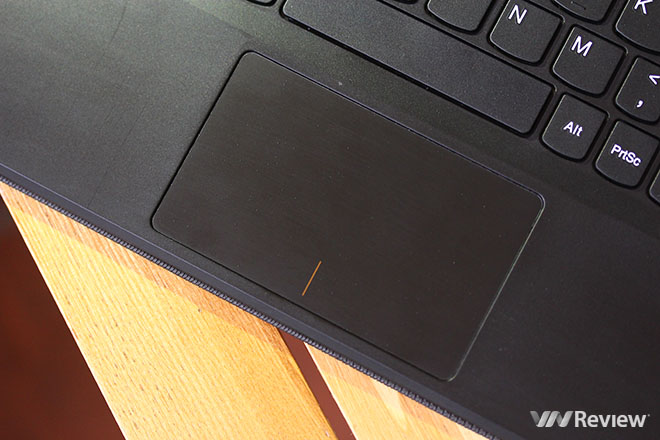 However, the touchpad is a bit small and multitouch support is not good

The touchpad on this keyboard is quite small but responsive, supports multi-touch but only good with scrolling pages. With gestures such as dragging your finger to zoom in / out, the touchpad operation is not as smooth as using the touch screen. 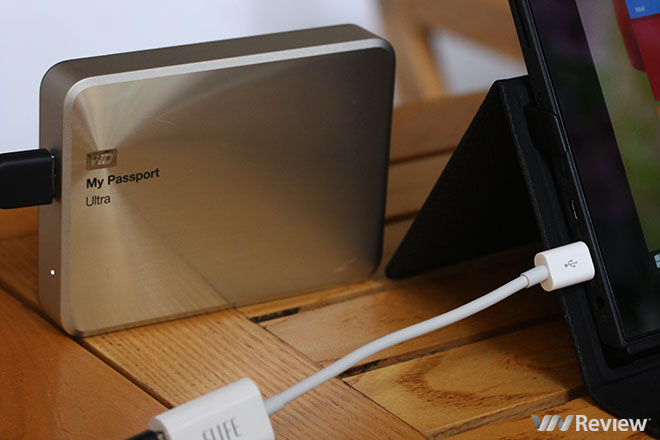 When used in practice, the lack of USB port is also a disadvantage of MIIX 3, because you can not plug in a mouse, USB 3G or external hard drive without additional accessories. USB OTG cable can meet this demand but it is not very handy.

Lenovo also pre-installed some of its applications such as SHAREit, VeriFace Pro, Telegraph for Lenovo or McAfee LiveSafe security software. The number of pre-installed software is not too much and if not, you can easily remove it.

Regarding battery life, in the test, we turned on an HD-resolution movie with a screen brightness of 70%, keyboard and connections were turned on, MIIX 3 ran the movie for 5 hours and 45 minutes, the machine nearly ran out. battery and self off. Thus, if the demand for use with intensity is not too high, the battery of the device is sufficient for the day. CThe original charger has a 1.5A output current, compared to typical 2A devices, so the charging speed is quite good

slow. When trying to charge from the turned off state to protect the battery (about 3% of the battery left), after 5 hours, the device will be fully charged.

With a protective case and keyboard, MIIX 3 has harmonized the advantages of both tablet and laptop when helping users can use the device as a tablet and can switch to work as a computer. laptop as needed.

MIIX 3 will be suitable for those who love the compact, handy touch screen of the tablet but still need to work on Windows environment, especially must have a hard keyboard for fast and convenient input. . Still, hope is Lenovo will improve the performance of the next MIIX 3 versions to better meet the needs work, entertainment and games.