Bringing many new improvements compared to the previous generation, from switches to designs and accessories included, the E-Dra EK3104 RGB version 2021 promises to stir up the market for mechanical keyboards in the segment under a million dong. end of this year.

E-Dra is probably not a brand that is too unfamiliar to the Vietnamese gaming community. Two years since its debut in Vietnam market, E-Dra has continuously launched new products as well as expanded its business. VnReview had the opportunity to experience the E-Dra EK3104 RGB 2021 mechanical keyboard, the upgrade of the 2020 model continues to aim at gamers who have a not too wide “wallet”. The listed price of E-Dra EK3104 RGB 2021 is 889,000 VND.

Open the box and design overview 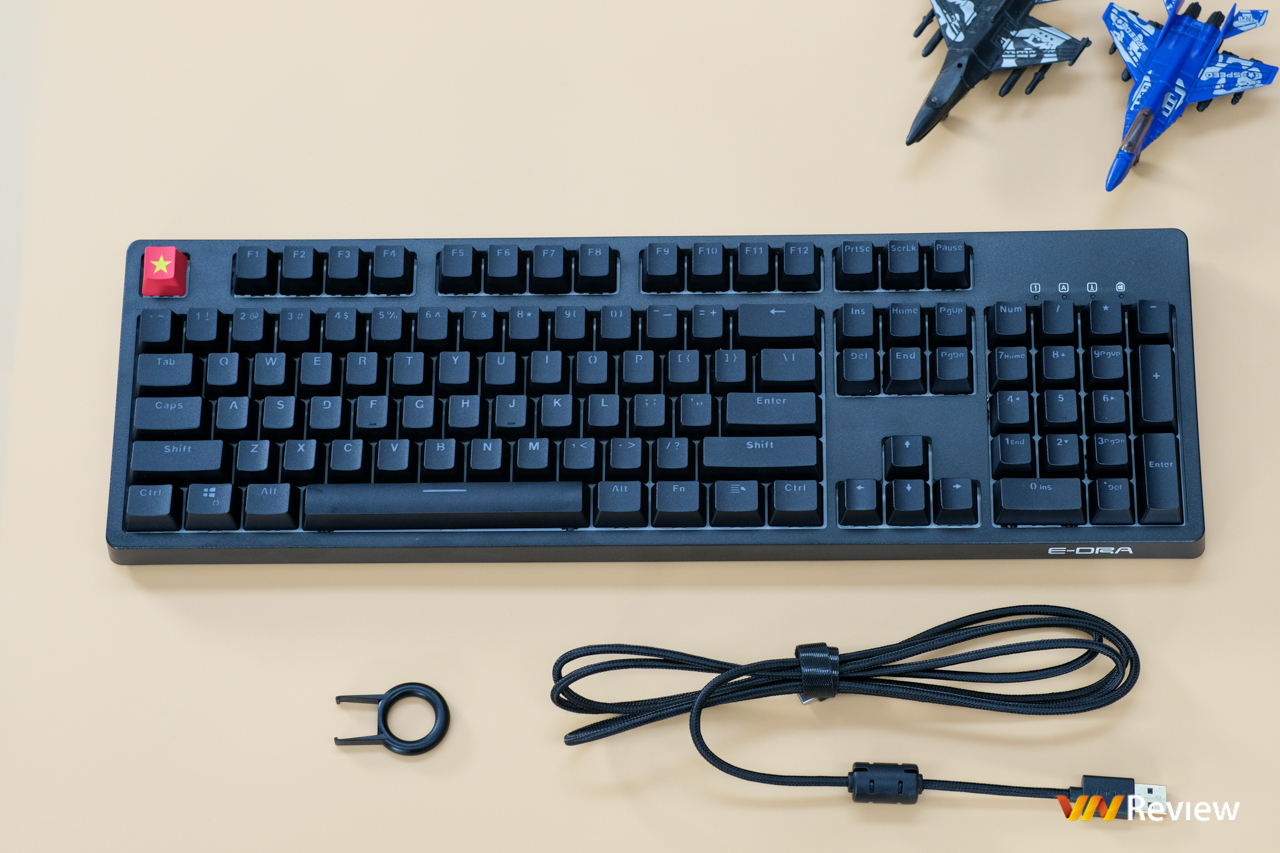 Right from the bundled accessories, E-Dra has shown his attentive attitude to Ek3104 RGB 2021, with many changes aimed at enhancing the user experience. First, it is the appearance of the plastic sheet to dust the keyboard when not in use, and then the E-Dra has switched to using a separate cable connected via the type-C port. 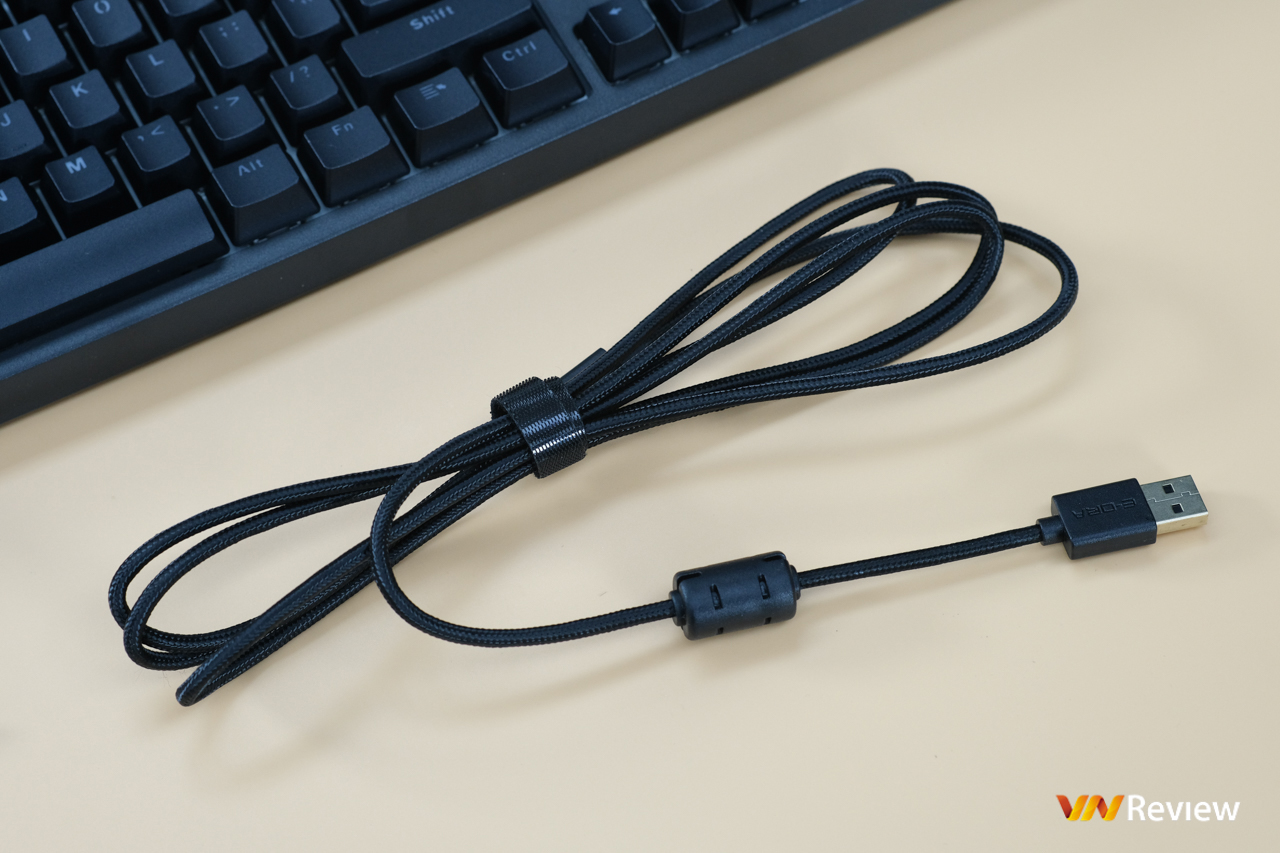 Not only does it increase the portability of the keyboard if you have a hobby of working outside, the use of a type-C type-C detachable cable also allows users to easily replace it if the included cable has problems. And although it is a product in the segment of less than one million dong, the bundled E-Dra EK3104 RGB 2021 cable is still firmly covered, and the gold-plated USB-A connector. 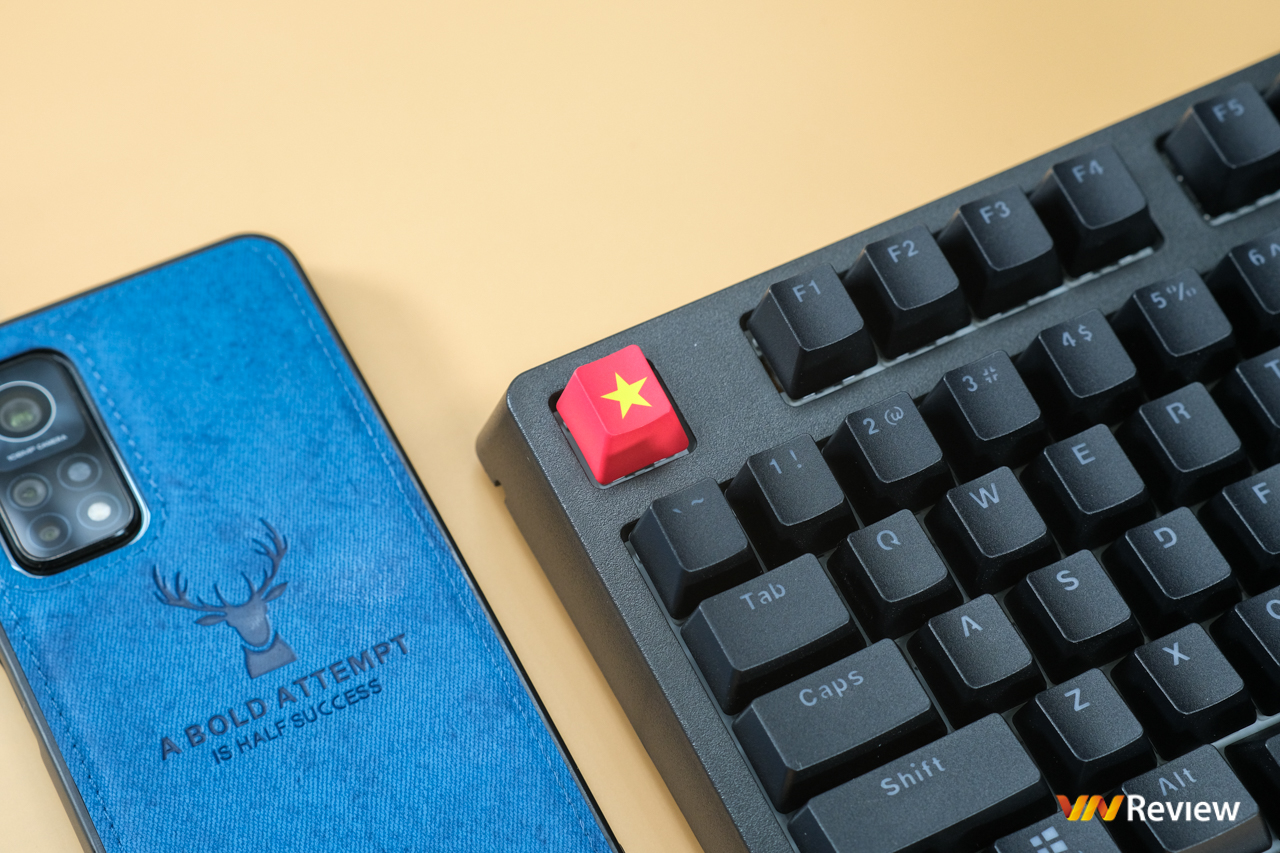 In terms of accessories, the EK3104 RGB 2021 also received a keycap printed with the Vietnamese flag, PBT plastic material, dye-sub printing, so it will not fade or fade when used for a long time. 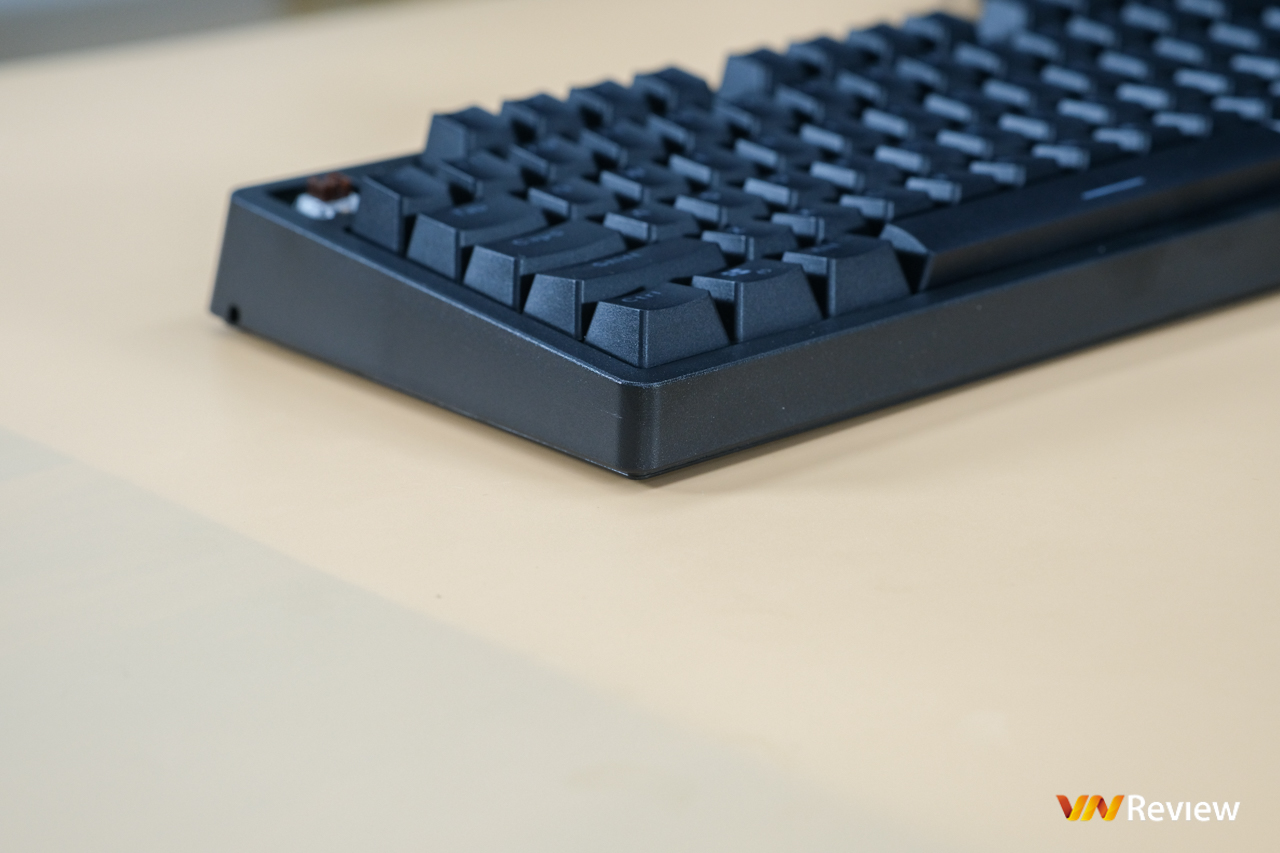 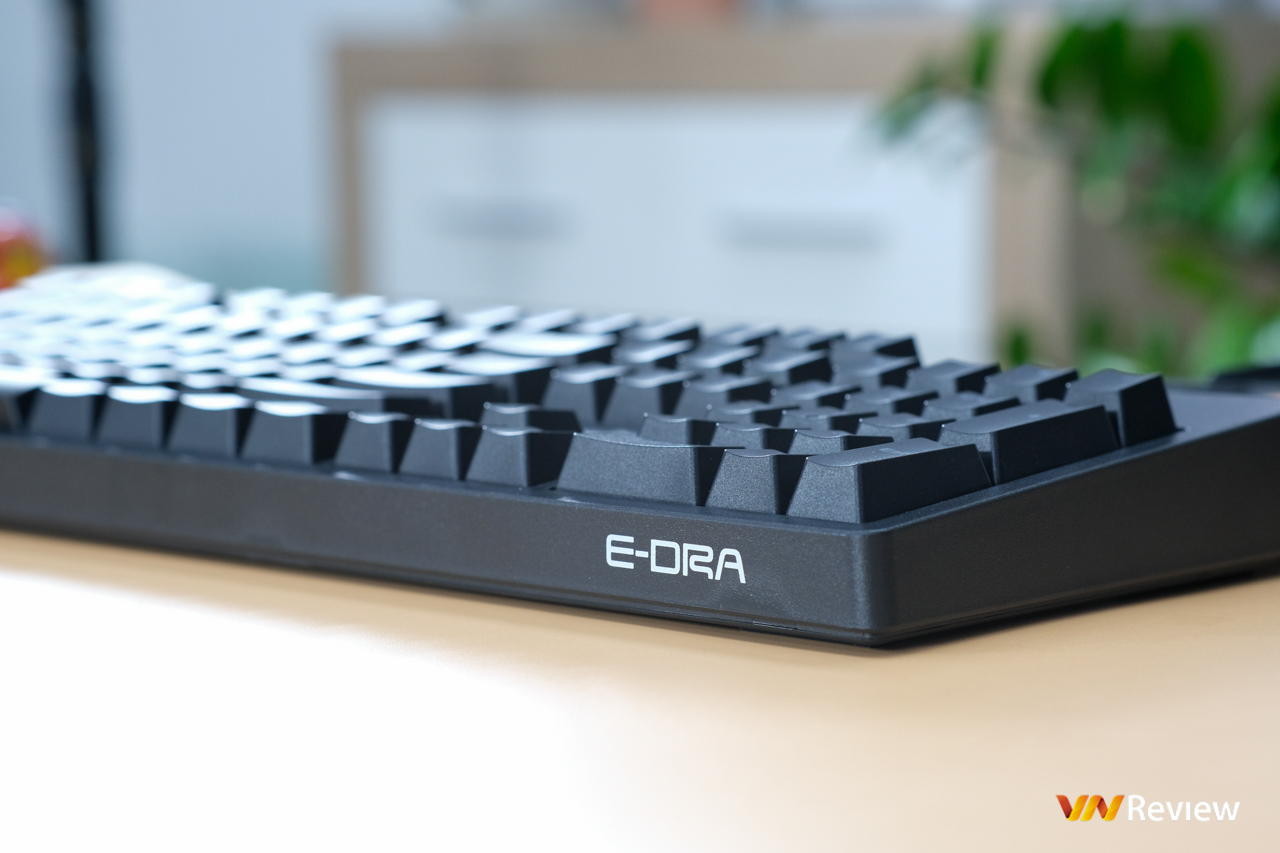 Design overview, the E-Dra EK3104 RGB 2021 is almost no different from its predecessor. The name EK3104 tells us that this is a 104-key ANSI layout version, distinguished from the EK387 layout TKL (ten-key less). The key body is covered with a thick plastic shell, coated with roughness to limit sweat retention. The biggest difference is that the E-Dra branding logo on the right corner of the keyboard is no longer dragon. 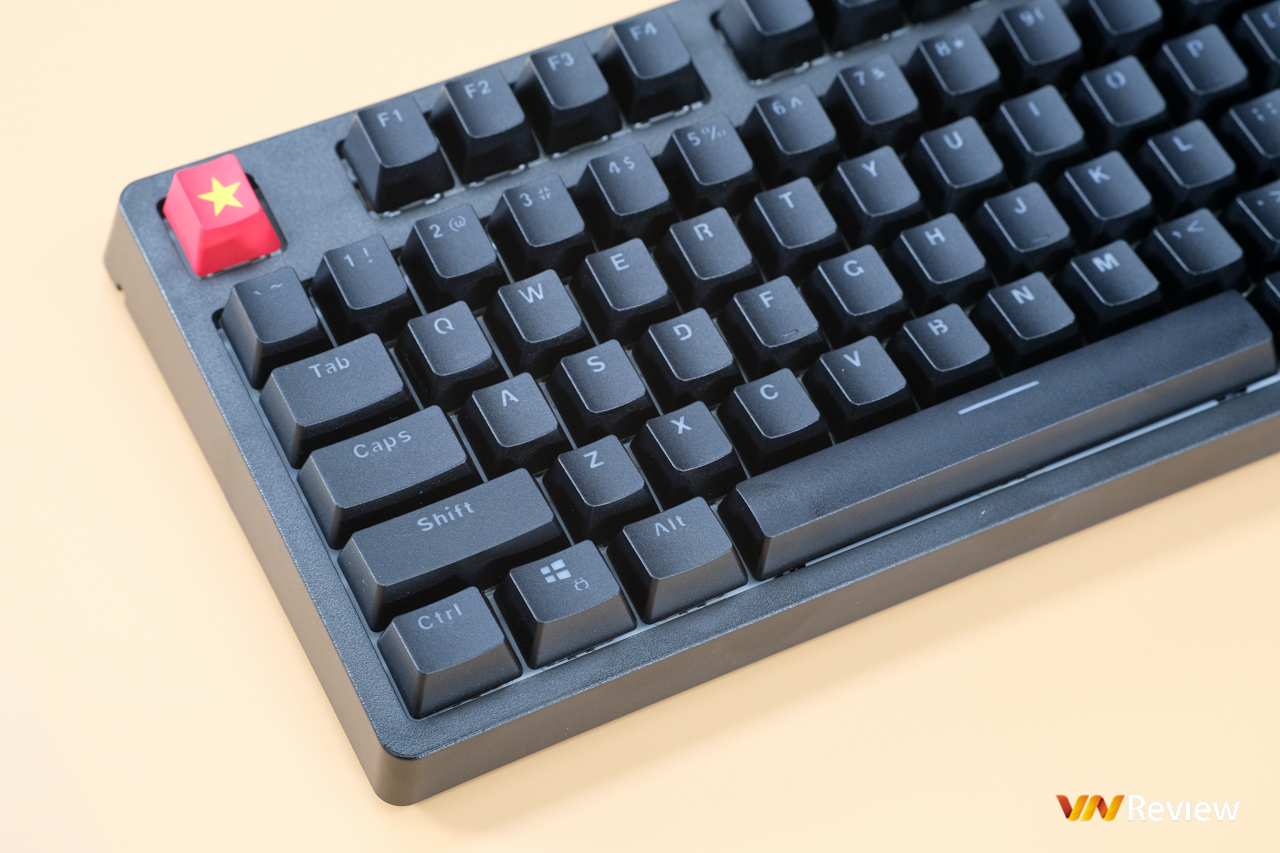 The design of the high key cover, covering the classic keycap leg of the E-Dra EK3104 RGB 2021 reminds me of iKBC’s mechanical keyboards. The keyboard profile (keycap height) is OEM, so novice keyboard users can easily get used to it. 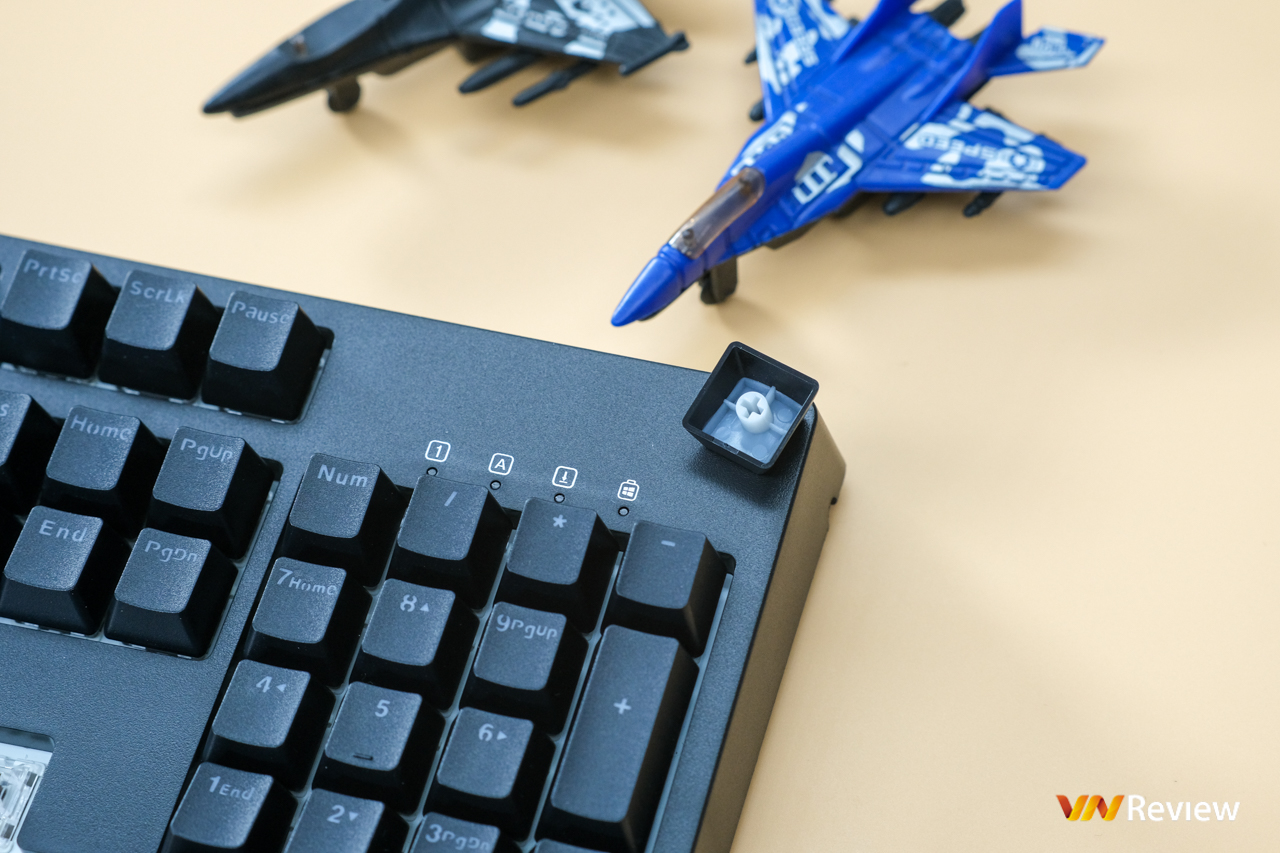 Located in the segment under a million, it is not surprising that the keycap of the E-Dra EK3104 is only thin ABS plastic, the plastic will be shiny when used for a long time. The font printed on the keycap also has no obvious upgrade compared to the previous generation. However, they are still printed in double-shot format, allowing the LED to penetrate and the characters not to be lost compared to the laser engraved keycap. 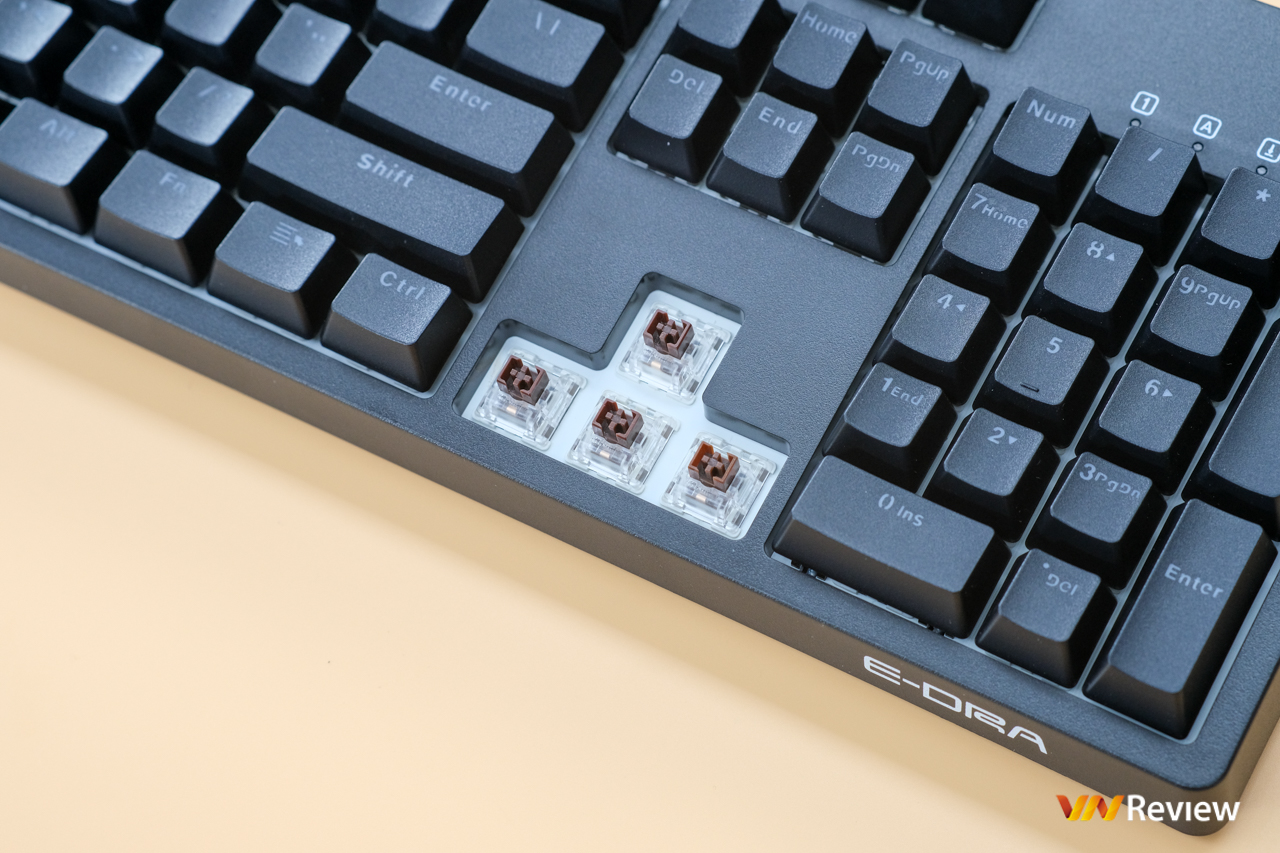 The switch, the most important part on every mechanical keyboard, is also the aspect where the E-Dra EK3104 RGB 2021 gets the upgrade. No longer using the Outemu switch like the previous generation, the E-Dra EK3104 RGB 2021 is equipped with a Huano switch with a durability of up to 50 million clicks. Huano is a brand that users know more about mouse switches, but it also makes switches for keyboards.

According to E-Dra, on the new version, the switches are soldered straight to the board, limiting switch failures of the old Outemu series, but at the same time users will not be able to hot swap the switches at will. before. 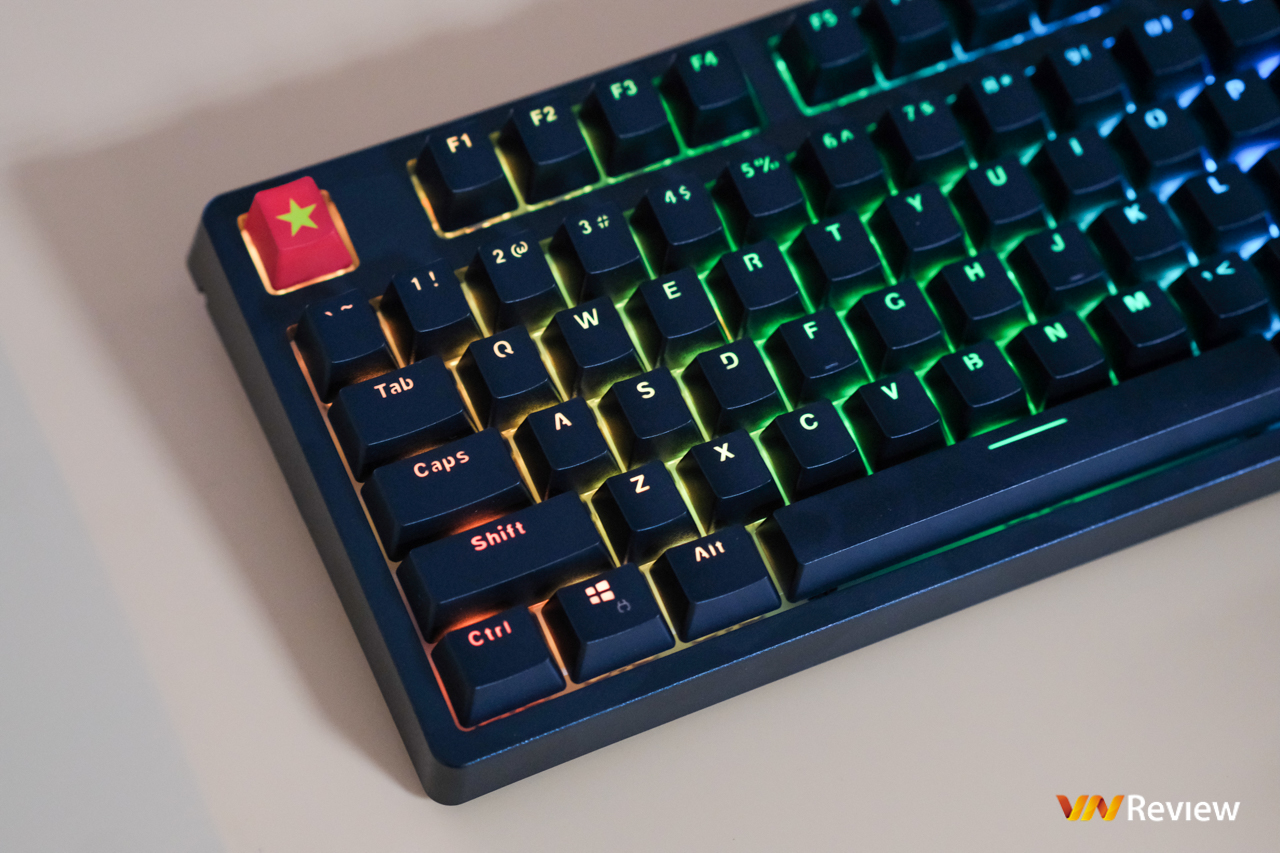 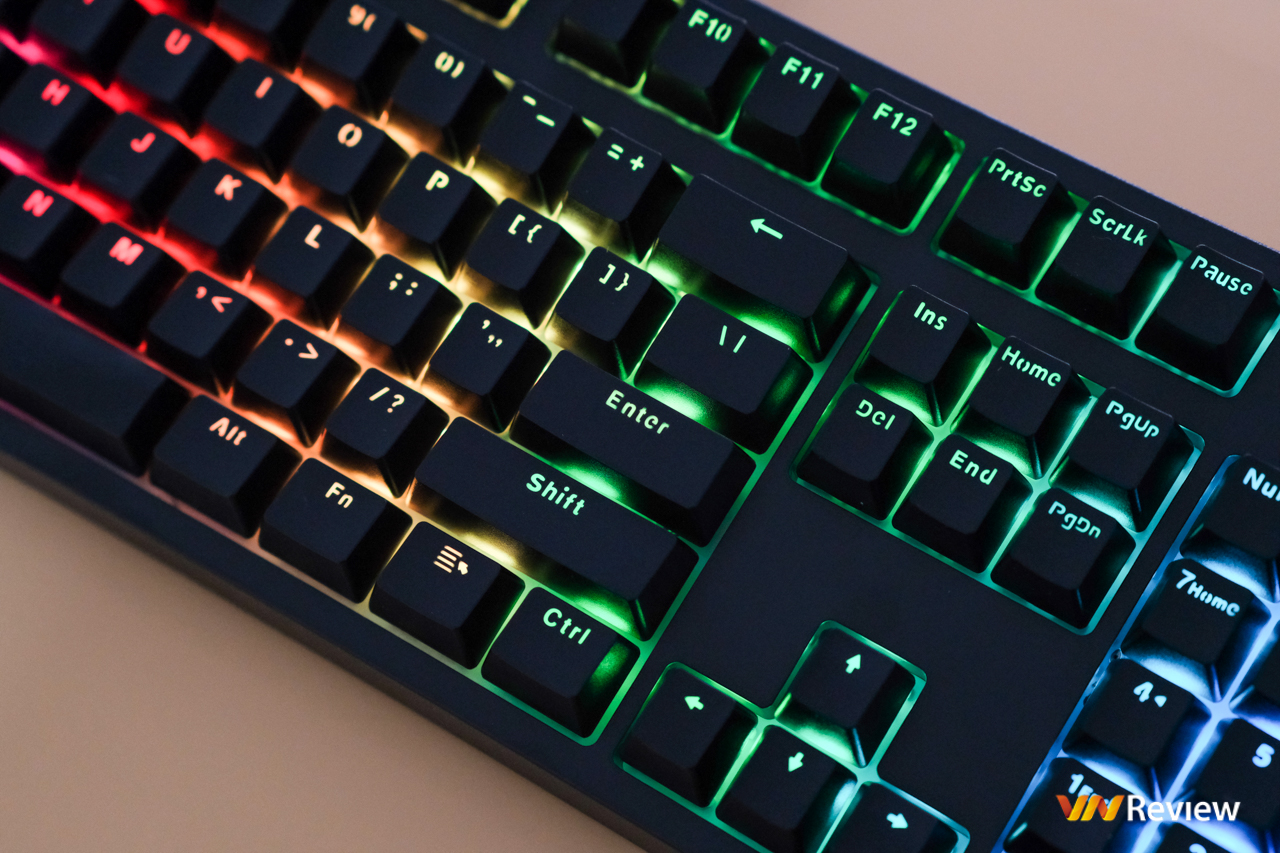 Another notable upgrade of E-Dra EK3104 RGB 2021 is the LED system upgraded from Rainbow (Rainbow, each LED has only a certain color) to RGB (it is possible to customize the color of each shade. LED). The LED bulb is located under the housing of the switch, plus the keycap design, the brightness of the E-Dra EK3104 RGB 2021 is relatively soft, even at the maximum. Users can change the LED mode through the Fn keyboard shortcut or through its own software, the number of preset LED modes is also very rich. 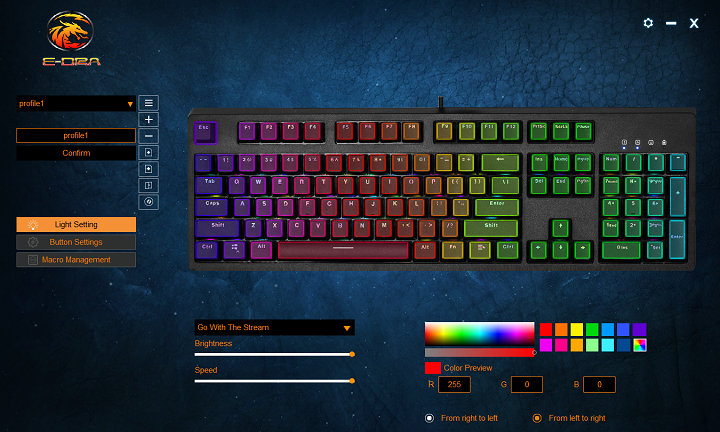 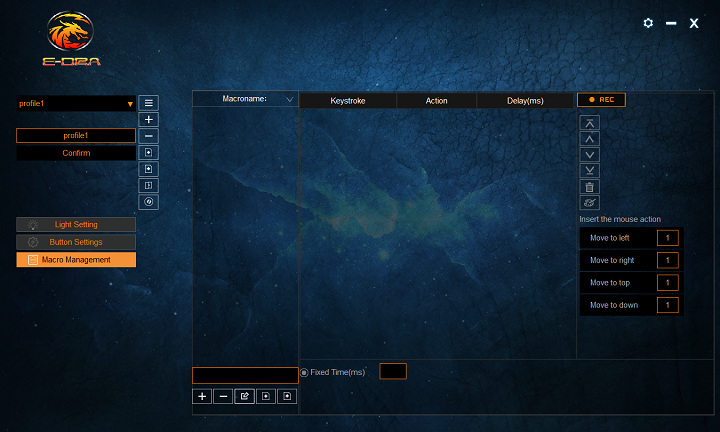 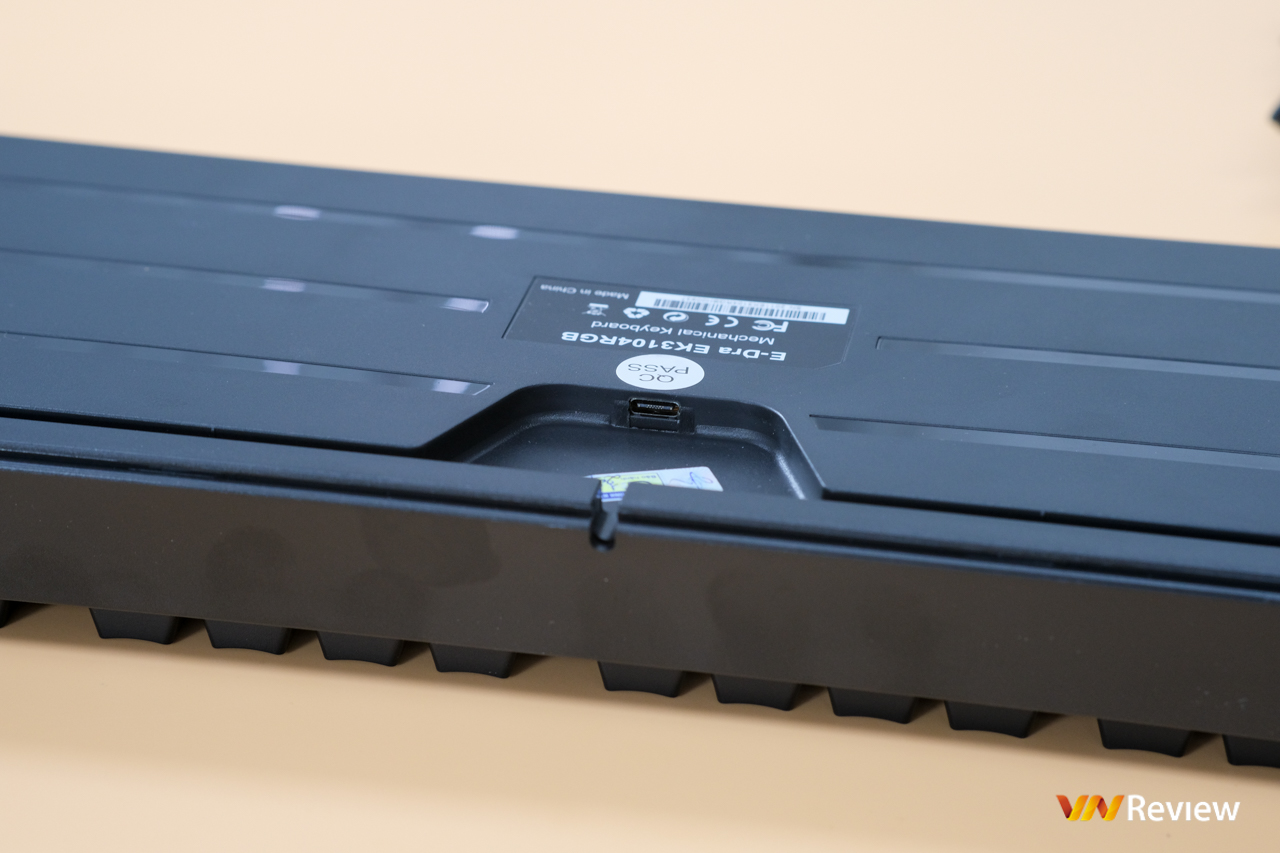 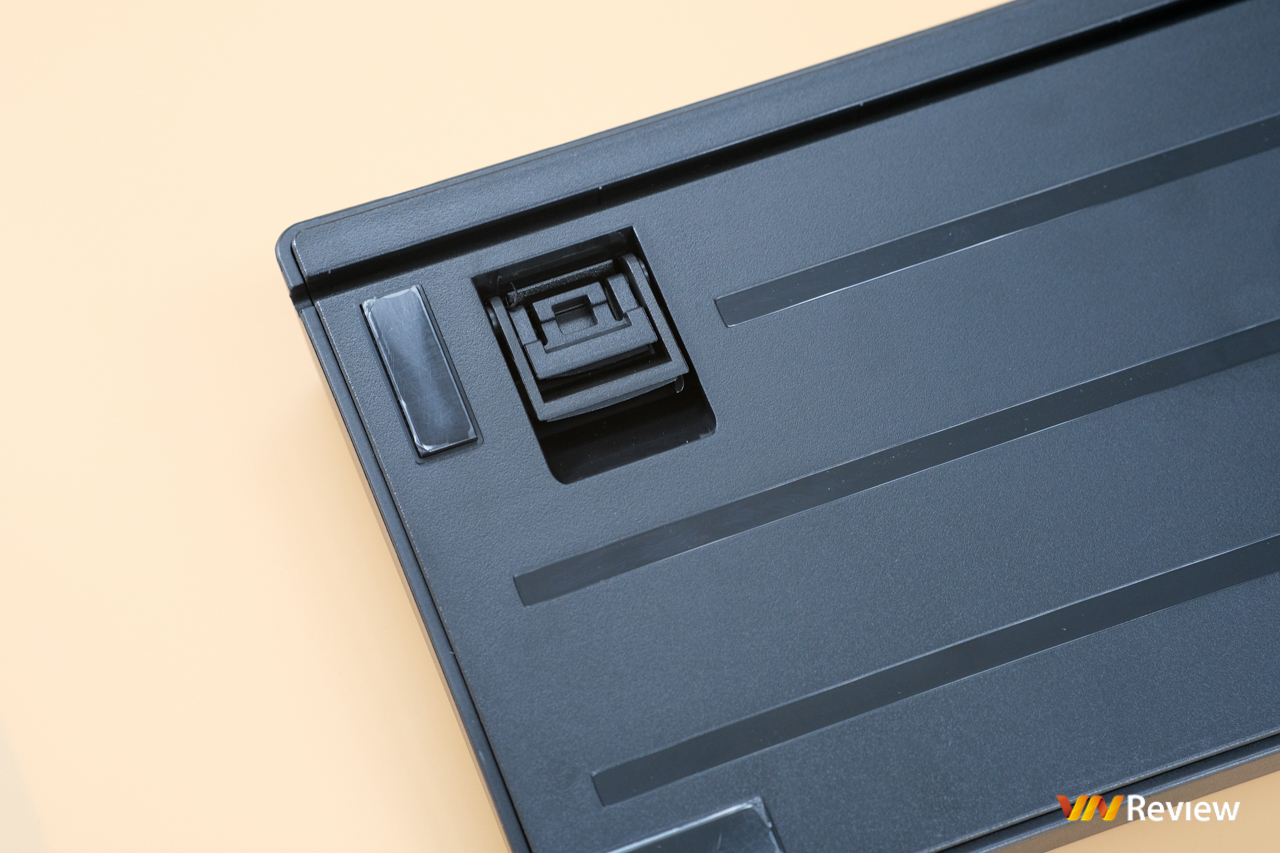 Flip the rear, we can see that E-Dra has integrated a wiring track for the EK3104 RGB 2021 for a cleaner user gaming area. Standard Type-C connector, as mentioned. The keyboard also has two levels of lift for users to choose from, with non-slip rubber soles in the four corners of the keyboard.

Because the writer has not had the opportunity to experience the 2020 version of the EK3104, it is difficult to compare the difference between the two generations, the effectiveness of replacing the Outemu switch with the Huano switch. However, in the past few days of experience, the Huano switch of EK3104 RGB 2021 gives a good impression of the typing feeling. The tactile of the Brown switch is very pronounced, low-noise. Although there is not much information, in my experience, the pressing force and key travel of the Huano switch are similar to the Gateron, about 45g and 4mm bottom-out. 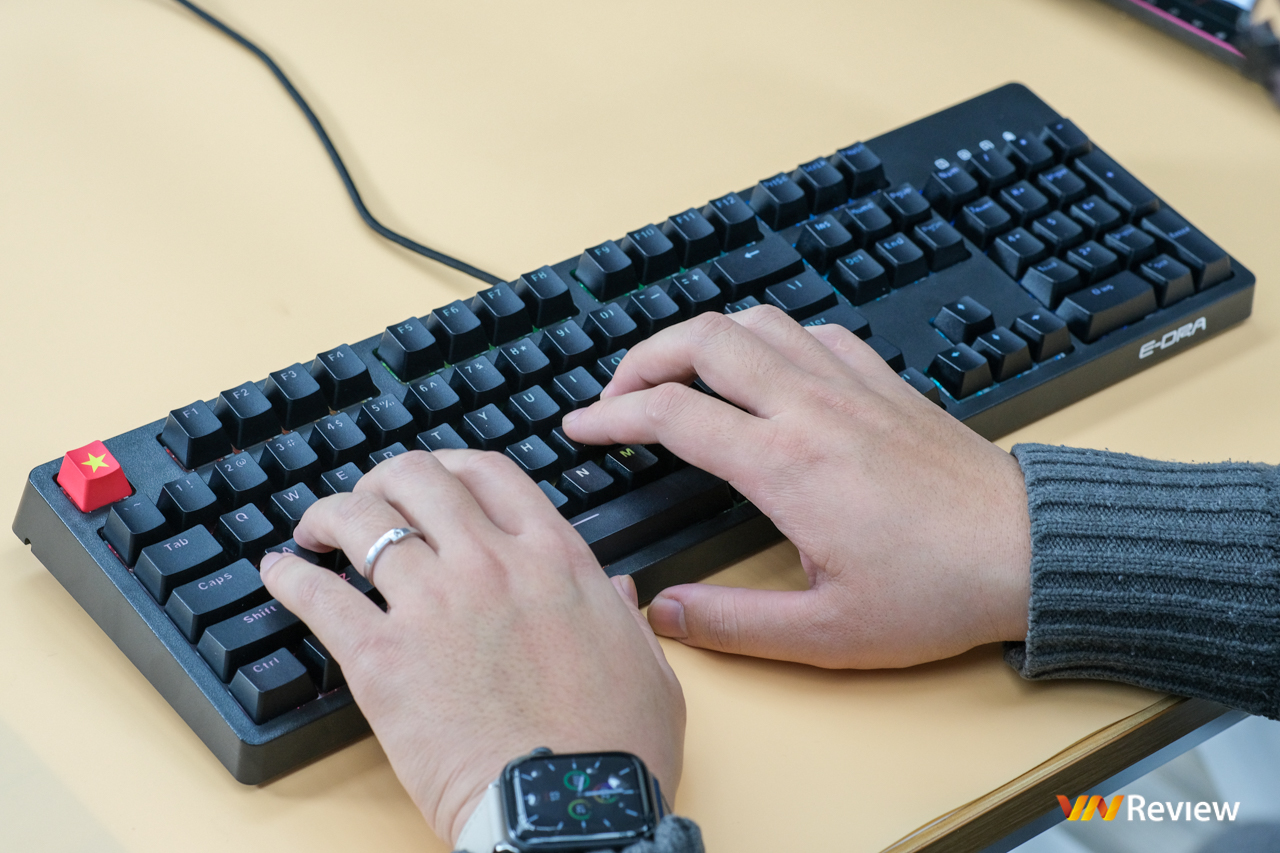 During a few days of use, I mostly used the E-Dra EK3104 RGB 2021 for text typing purposes. The light, tactile pressure makes word processing softer, doesn’t cause fatigue, and the Brown switch’s click-free feature will limit noise that is annoying for impulsive people. around.

In general, E-Dra EK3104 RGB 2021 has almost all the qualities to become one of the most worth buying mechanical keyboards in the segment under a million at the end of the year. Good typing feel, thoughtful accessories and an upgraded LED lighting system to customizable RGB. The biggest weakness of E-Dra Ek3104 RGB 2021 is probably the keycap is not really impressive. Of course, you can invest in a better keycap set, but the money will also be enough for you to consider other more reasonable options.