In previous reviews, I have shared with you the VivoBook Pro 15, the device that is introduced as a combination of low-cost and high-end ZenBook Pro models. Its strong points are strong performance, attractive design, good surface temperature. The exception is the incomplete gateway system, bad screen, unstable cooling fan and some other factors. Technically speaking, many scratches may have damaged a beautiful work, although it has a relatively attractive price. Luckily, there are some issues that can change due to software updates. Next, in this article, we will come to the 17-inch brother of VivoBook Pro 15, the Asus VivoBook Pro 17 N705UD.

My test VivoBook Pro 17 is equipped with a new CPU: 8th-generation Intel Core i7-8550U with a TDP of 15W – as opposed to the 45W Core i7-7700HQ processor on its sibling. Will the new processor guarantee performance when reducing power consumption? In addition, the device is also equipped with Nvidia GeForce GTX 1050 GPU, 512 GB NVMe SSD, 16 GB RAM and a nicer IPS display. Competitors include Dell XPS 15 9560, HP Pavilion 17z and Acer Aspire 7 A717-71G-72VY

Here are the specifications of the Asus VivoBook Pro 17 laptop used in this review:

The Asus VivoBook Pro 17 N705UD is finished from a plastic frame with a brushed aluminum surface that covers the palm rest and screen cover. Metal material will increase certain certainty for a fairly large and fragile device. As a result, we have a device that restricts quite a bit of warping compared to other devices in this segment. It also brings a more sophisticated, aesthetically pleasing look.

The hardness of the screen is not really perfect, when twisting still causes undesirable warping, but the ability to withstand the force of direct impact from the back is okay. Hinge part has high certainty, when moving gently as well as during daily use, there is no shaking of the screen phenomenon. Therefore, you can not open the device with one hand. 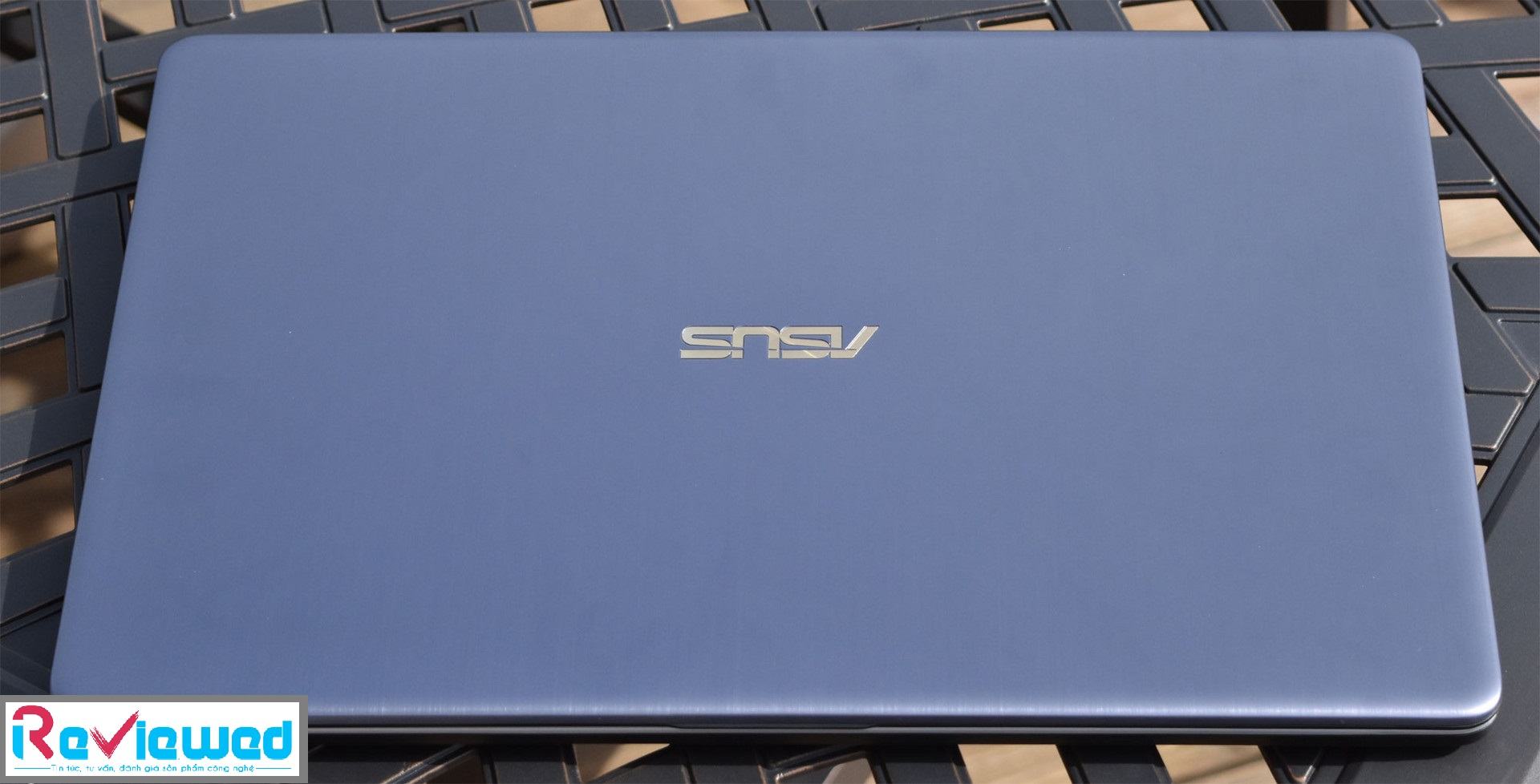 The underside is made of plastic, although covered with metal to increase ruggedness and aesthetics, the machine is still quite simple. The corresponding weight is quite low: Only 2,346 kg, it is significantly lighter than conventional 17 inch devices. It is also thinner and a bit smaller than rivals.

The port system on VivoBook Pro is quite poor for a 17-inch device. We have a total of 4 USB ports (3 USB A and 1 USB C port) but 2 of the 4 ports are USB 2.0. The device still has a full size card reader, Ethernet, HDMI connection.

The ports are arranged logically and comfortably along the left and right sides. Good location and distance, easy to access, use.

The design of VivoBook Pro 17 unfortunately made it difficult to maintain and repair. To completely remove the back cover, you must remove 10 screws on the bottom edge, the aluminum cover on the top needs to be removed very carefully from the edges to avoid damaging the plastic clips kept on the top and bottom of the frame. machine. There are 3 separate ZIF connection cables in the center of the board. Removing these caps is not a simple task, you need a support person to hold the top cover to remove.

After getting inside, there’s not much to do. Memory storage is fixed by a number of screws to the circuit board. The wifi card is easily accessible from the inside as well as only one of the 2 cooling fans. Other components such as RAM, SSD, 2nd cooling fan require you to remove the entire machine and circuit board to access. 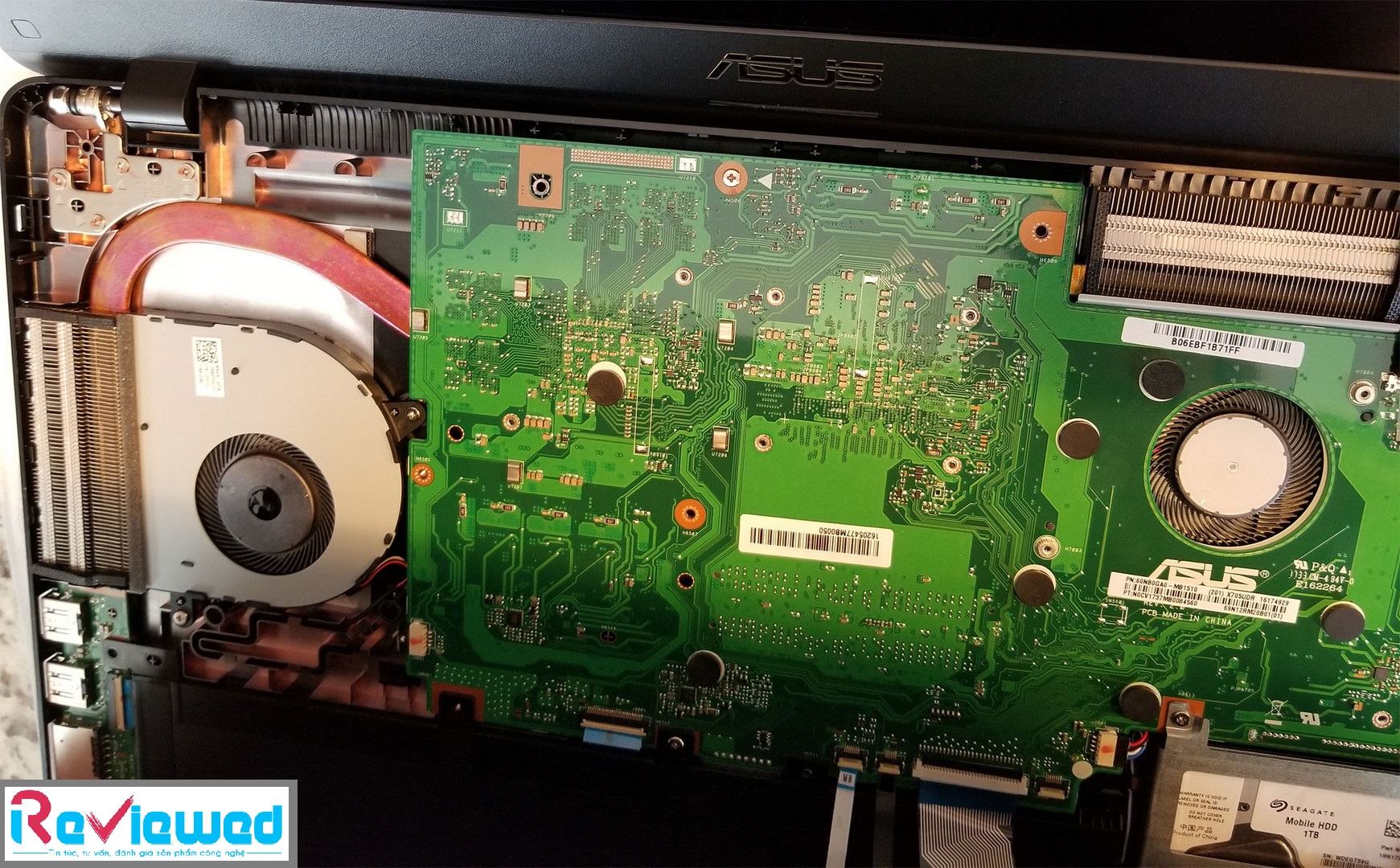 The keyboard of VivoBook Pro 17 is exactly the same as on VivoBook Pro 15 and of course will have the same experience. The quality of the keyboard finish is good, the keyboard journey is average and the score is clear, though not as good as the super products like the XPS 15. I appreciate the integration of the numeric keypad, but really it for experience is much worse than other competitors because the size is reduced both horizontally and vertically. The arrow keys are also quite narrow, so it takes a while to get used to.

Touchpad is another difference between VivoBook 17 and 15 (no fingerprint sensor integrated with Windows Hello). In addition, the software that integrates Precision Touchpad is retained. Produced by Elan, the touchpad surface is soft, comfortable and spacious (104 mm x 72 mm), with a mouse button integrated into the lower half of the touchpad. The integrated mouse button has a very short stroke but has a good response. The downside is that the click sound seems louder than usual, which makes the experience a bit uncomfortable. 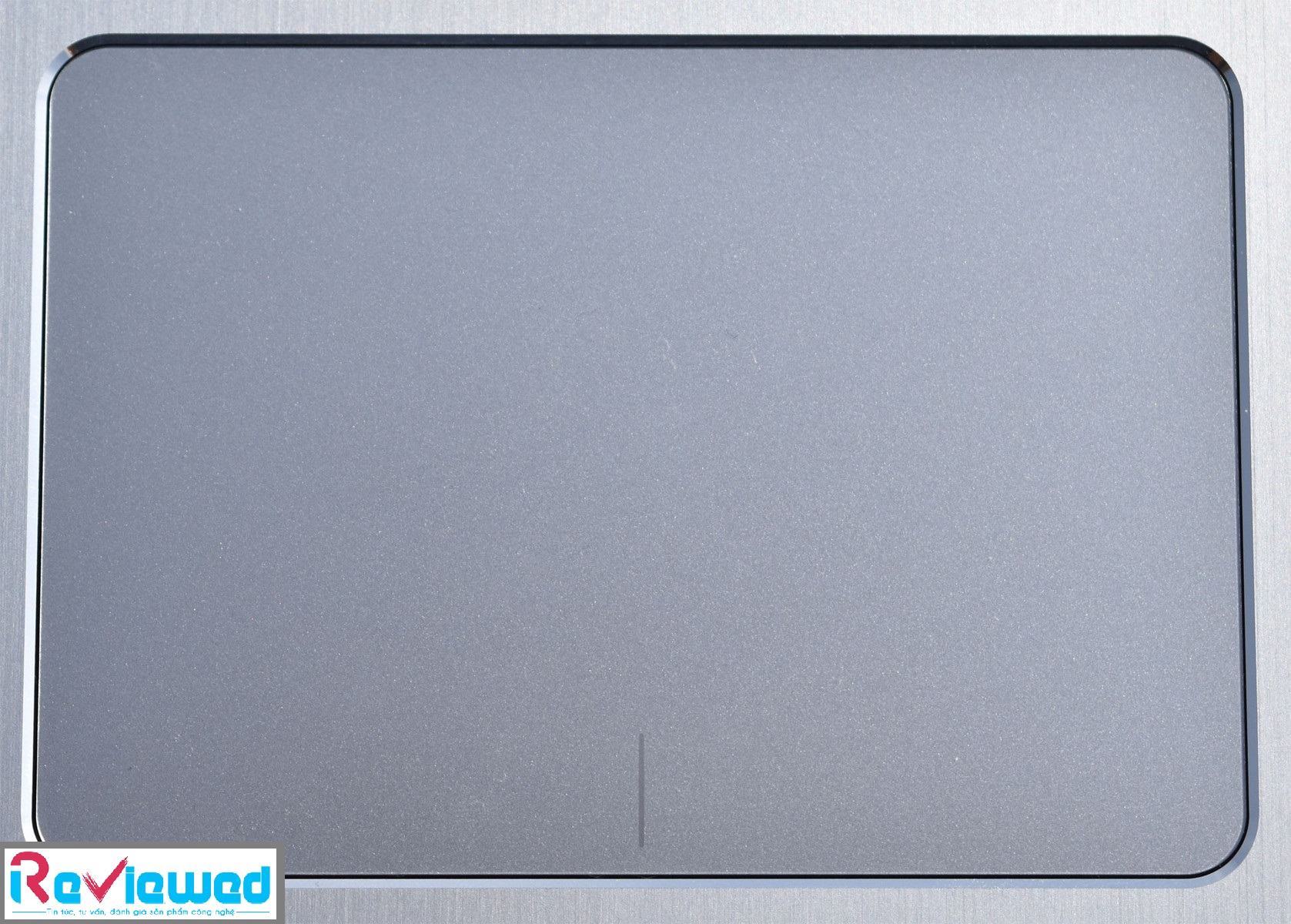 When used outdoors, the screen has good visibility in the majority of different environmental conditions (Except under direct sunlight) thanks to the anti-glare panel and the screen with brightness / contrast high. Viewing angles are greatly improved compared to the 15-inch version by using IPS panels instead of TN. 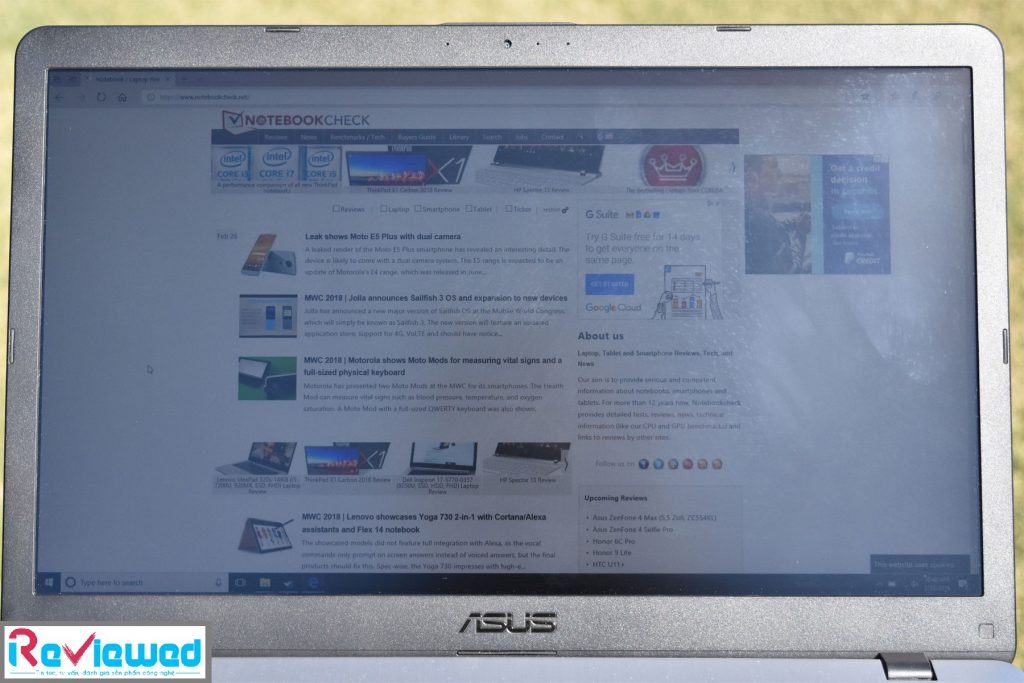 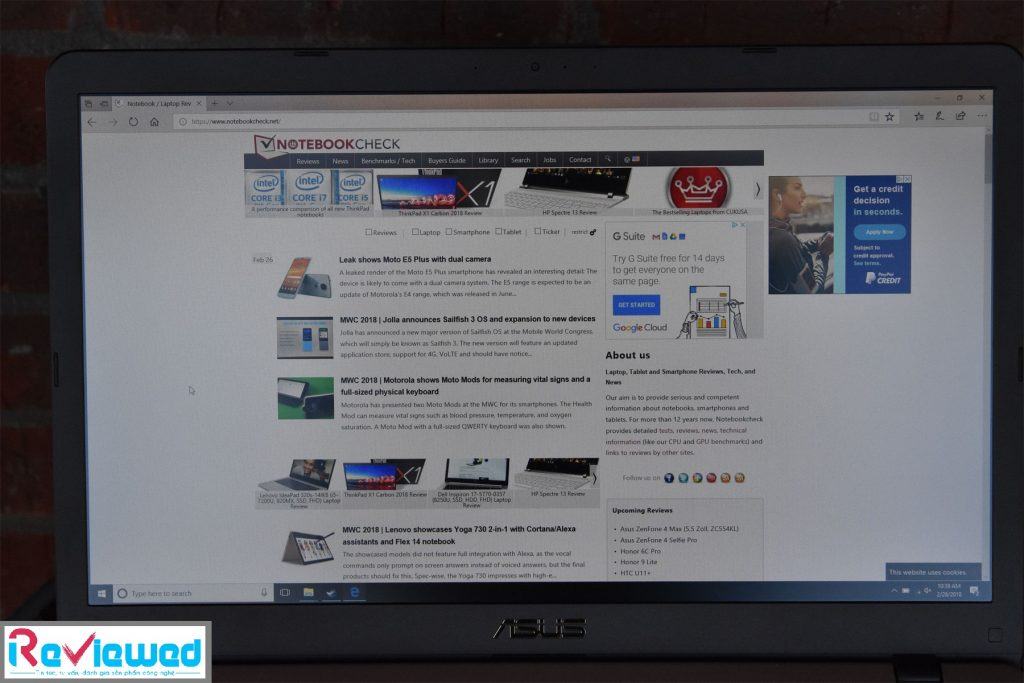 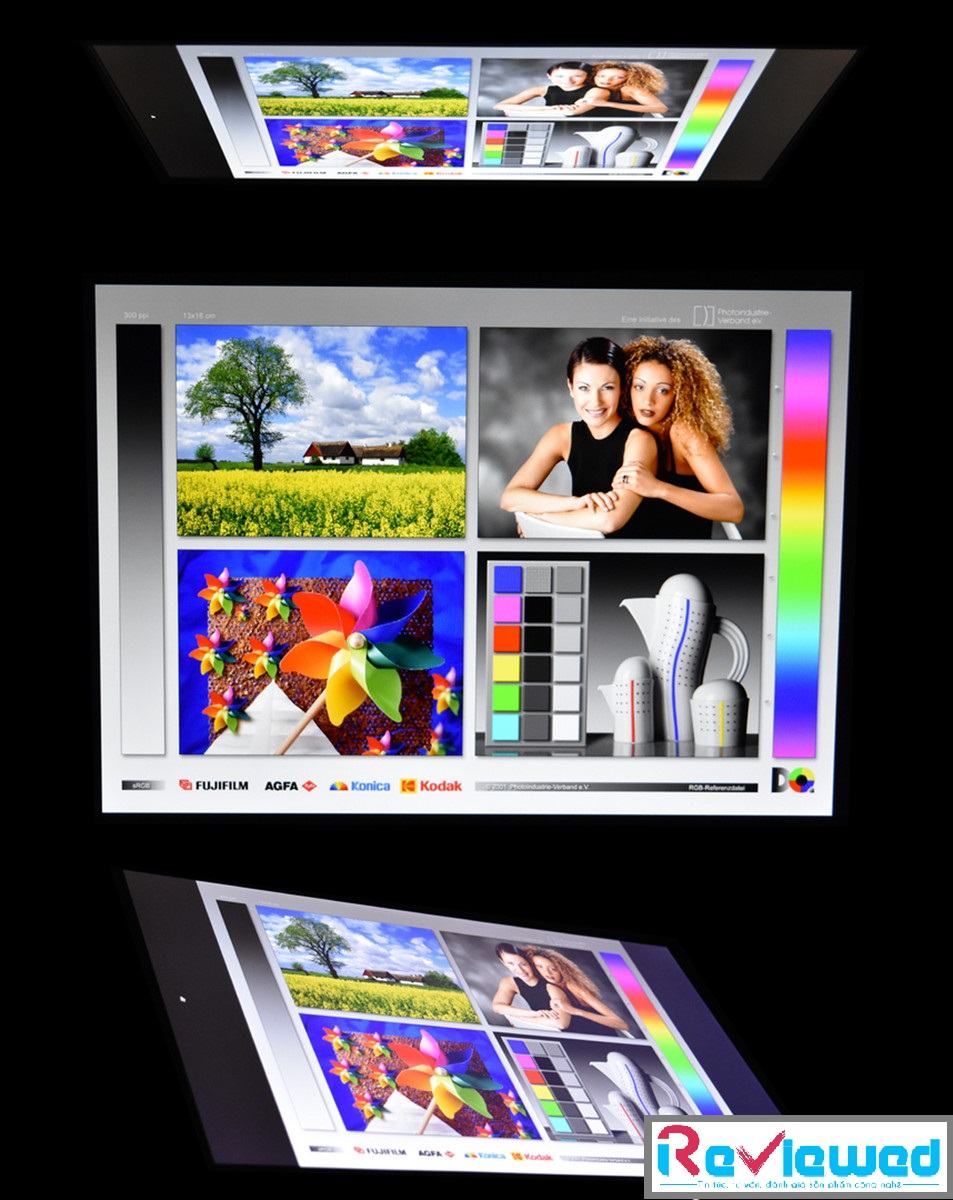 Again, the goal that VivoBook Pro aims to be performance. My test device used an 8th Generation Intel Core i7-8550U processor, 16 GB DDR4-2400 RAM, Nvidia GeForce GTX 1050 GPU, 512 NVMe SSD. With the above configuration, I am looking forward to a strong performance that can handle a variety of applications. As I said above, upgrading VivoBook Pro 17 is not easy, so you should consider carefully before choosing a configuration. 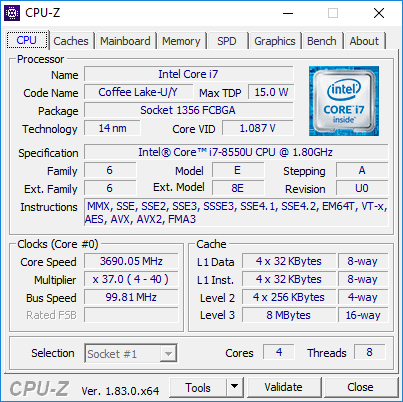 Intel Core i7-8550U is a quad-core processor clocked from 1.8 GHz to 4.0 GHz. The base power consumption is 15W, which is only 1/3 of the Core i7-7700HQ on VivoBook Pro 15. Therefore, the device’s performance cannot be equal to the i7-7700HQ, but will it be accessible? The common ground or not is still very much dependent on the cooling system of the machine, does it provide enough space for the CPU to achieve high performance without overheating?

But that is not the whole picture. Maintaining performance is the biggest challenge with the cooling system on a thin and light device. In this case, VivoBook Pro 17 has a pretty big problem. When running the Cinebench R15 loop test, the score obtained after the first round is 625 points. In the second round, the performance score dropped to only 543 points, then remained stable from 515/518 points. The 14% performance drop is actually quite a lot. In contrast, on the Lenovo ThinkPad X1 Carbon 2018, using the same CPU, even thinner and lighter than the VivoBook Pro, only reduced performance by about 5% from the first round. 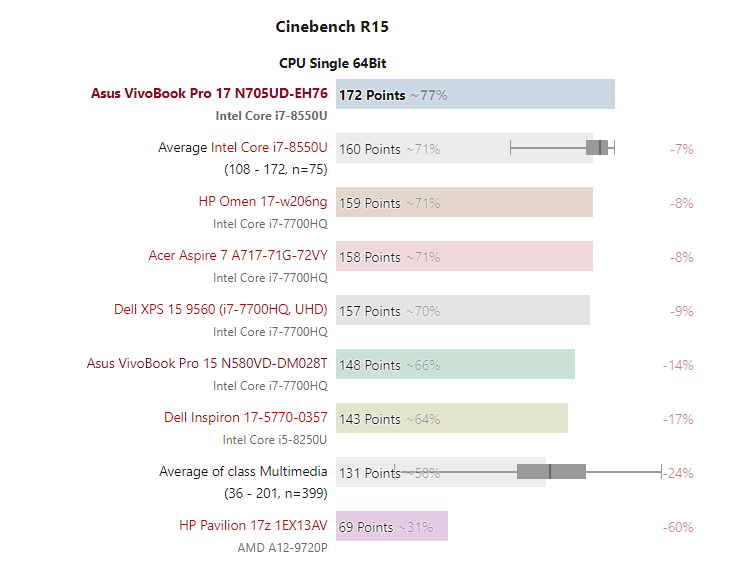 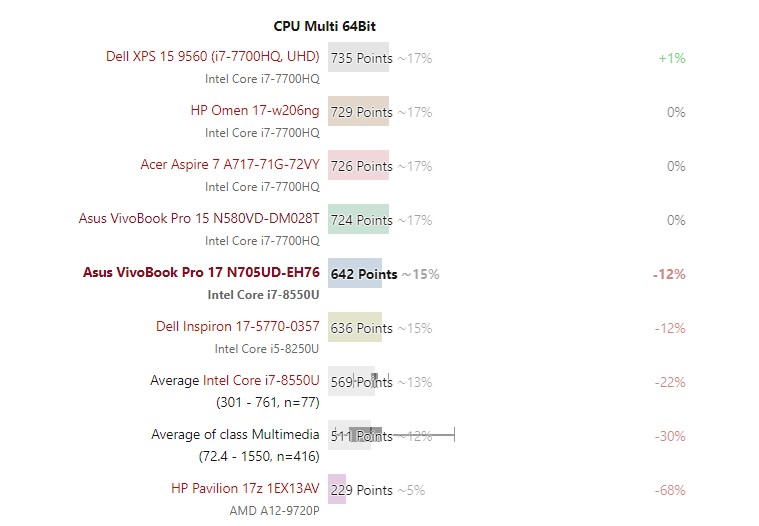 Ignoring the limitation of sustained performance, in everyday applications, VivoBook can perfectly respond. The device scores first in PCMark tests, giving the score higher than the average of devices with the same configuration. This is partly due to the lower screen resolution of the competitors, thereby improving the handling. 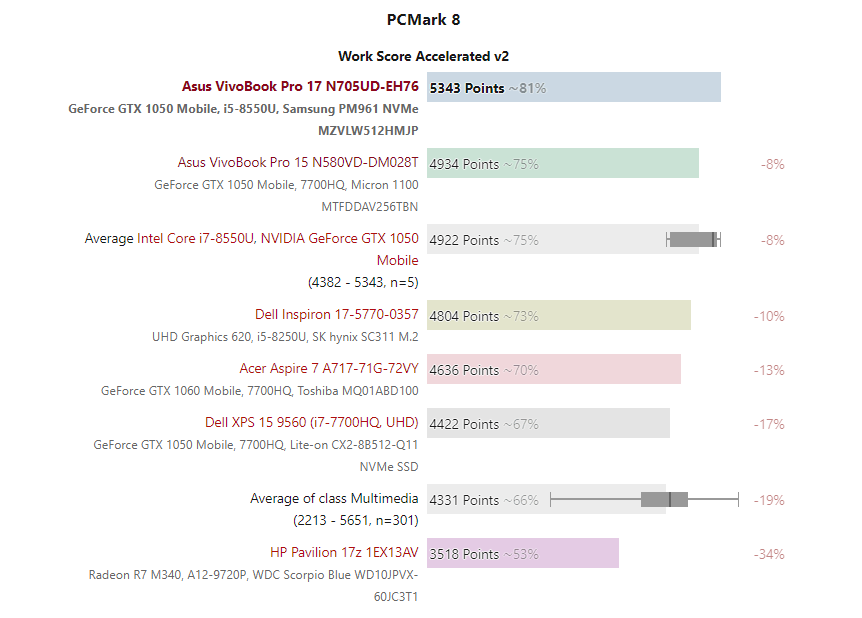 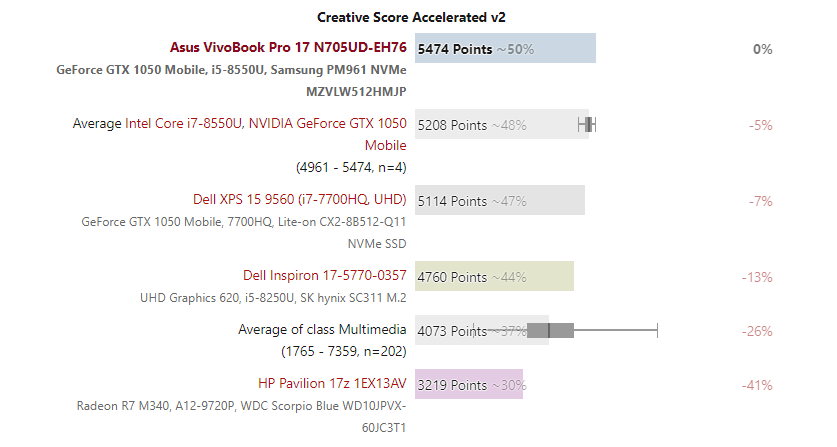 Overall performance through the marking with PCMark 8

Asus VivoBook Pro 17 N705UD owns 2 storage memories, SSD for system files, HDD for data storage. Although it sounds redundant, but I still recommend that you choose carefully before buying the machine because the ability to upgrade the configuration is not simple.

Using Samsung NVMe PM961, gave many devices admirable performance. On the Asus VivoBook Pro 17 is no exception, the scores beat the competitors. 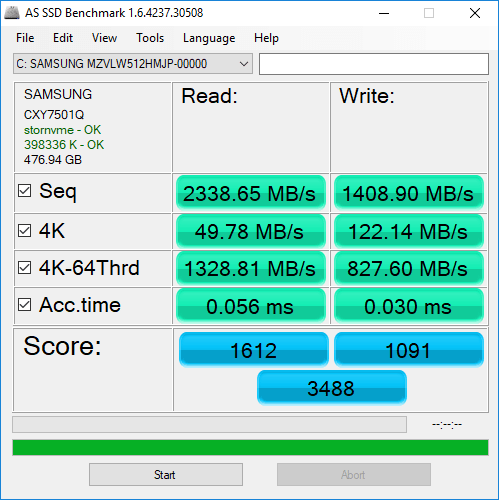 The Asus VivoBook Pro 17 N705UD is equipped with Nvidia GeForce GTX 1050 for graphics tasks. In benchmarks, the GPU completely achieved the expected performance, which is approximately the average of GTX 1050 devices, including the Dell XPS 15 9560. 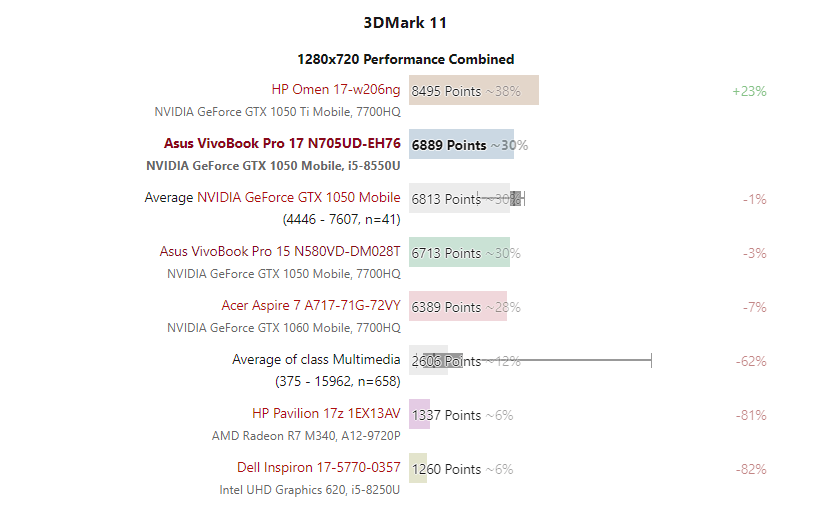 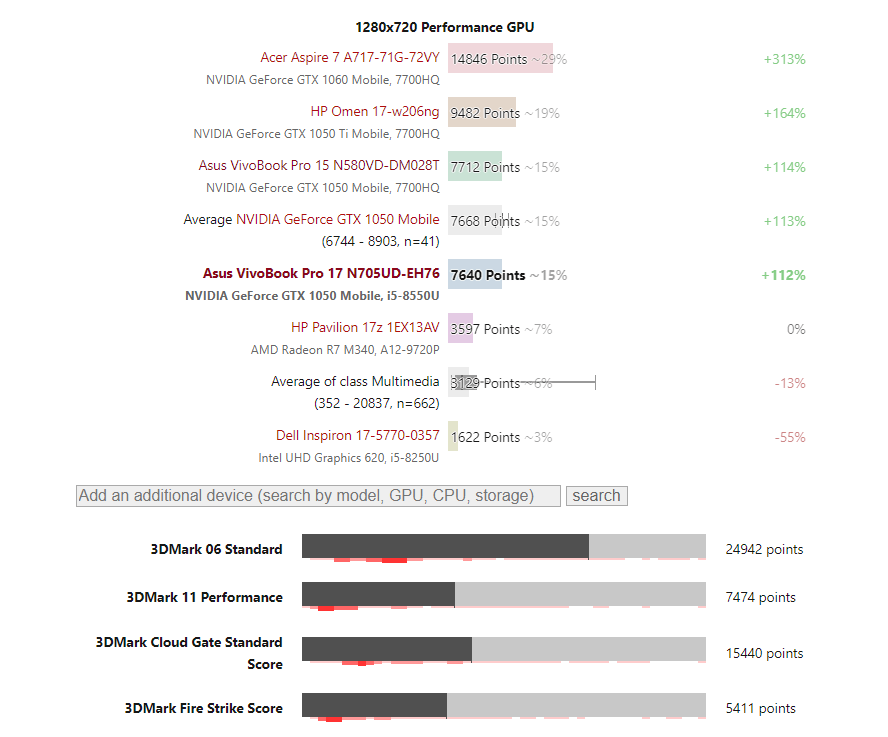 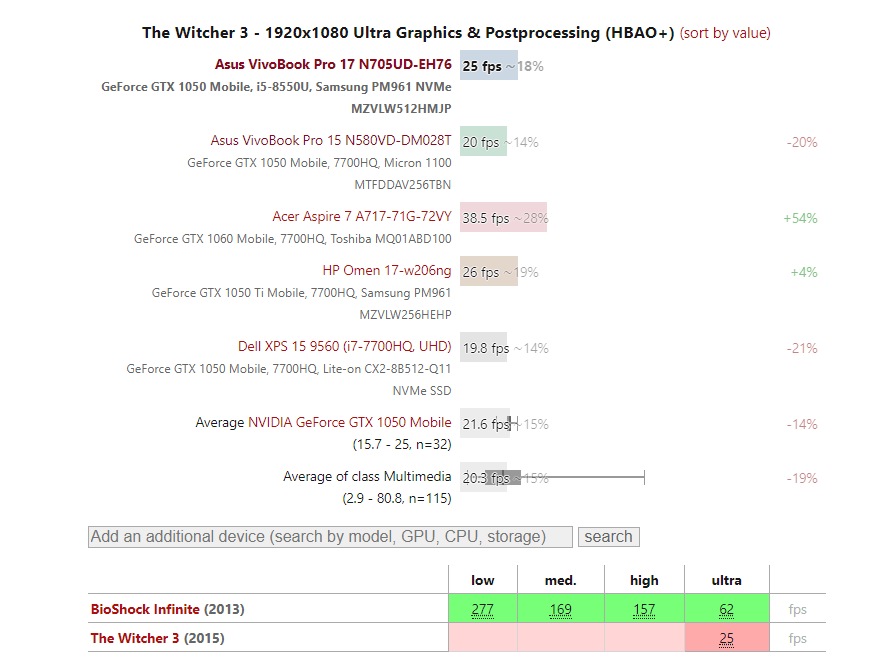 Surface temperature is a setback from the previous version of VivoBook Pro 17. While the idle temperature is very good at 26.1 ° C / 30 ° C, the load temperature quickly rises to 34.3 / 41.3 ° C. . There are hotspots that reach 46 ° C in the upper middle part of the top surface and 43.6 ° C in the center of the keyboard (which affects the user experience). The underside has many points with temperatures above 50 ° C. The high temperature makes it impossible to use the device on the lap for heavy tasks.

VivoBook Pro 17 creates sound at a moderate level, with high linearity, especially mid and high tones. As with other devices, bass is a major challenge. The bass is small and much less noticeable. Overall, the sound quality is quite good, bringing a comfortable experience. When you open the maximum volume, there is no vibration of the chassis.

The battery capacity of the Asus VivoBook Pro 17 N705UD is really small for a 17.3-inch device – only 42 Wh. With modest capacity, our device operates at full capacity for up to 53 minutes and maintains 4 hours 25 minutes of standard web surfing.

The Asus VivoBook Pro 17 is neither the trend leader nor the absolute superior. Instead it is able to handle daily tasks and play games at an affordable price

The Asus VivoBook Pro 17 N705UD has no real lead in the trend, the device is not a machine that can lead any factor in the market. Instead, it’s for customers who want to own a powerful device, good everyday performance, capable of gaming without wanting to spend too much money on a laptop.

Of course there are also weaknesses, the first is the performance is not really good, difficult to repair and upgrade, the keyboard layout is small and narrow, the temperature is high and the battery life is low. If those factors don’t bother you, consider Asus VivoBook Pro 17 N705UD as an alternative to more expensive devices.

Post Views: 66 Tonight, Pioneer has officially confirmed the availability of its aftermarket wireless CarPlay head unit. The company first showed off a prototype version of its wireless CarPlay product at CES, but now three new head units are available for purchase … . The flagship option here is the new AVIC-W8400N EX, which has […]

Post Views: 63 #Psychological #adolescence Although the boundaries between late adolescence and early adulthood are unclear, it is estimated that changes biological, psychological and psychosocial adolescence end around 18 years of age. Adolescence is marked by the convergence of these three basic facts. Physical changes in adolescents The psychological side of teenagers How teenagers think […]