On hot sunny days, refrigeration repairmen often do not finish their work and make a lot of money because of the large need for air conditioning repair. If not alert, consumers are easy to be “hacked” by air conditioners.

Pray to God every time I fix the air conditioner

Because he was ignorant about repairing refrigeration, Mr. Hoang quickly called a mechanic who was an acquaintance to come and fix it. The owner immediately sent a strange worker to his house to check. Seeing any damage to the reporter, Mr. Hoang also agreed instead of believing. When it came to payment, he fell back when the amount reached nearly 2 million dong.

“This worker checked for a while and then said the disease was: capacitor fire, reversing fan, cleaning the machine. The total amount I had to pay that day was 1.7 million VND. In which, the cleaning fee is 200,000 VND. After replacing the capacitor, I looked at the air conditioner capacitor exactly like the fan capacitors. I’m sorry but the air conditioner is working normally“, said Mr. Hoang.

Annoyed by the feeling of losing money unfairly, Hoang and his wife decided to buy another air conditioner in the living room.

“Because I rarely meet a conscientious electrician, I have learned from my own experience that I have to accurately calculate the volume of the family’s living room and spend more money to buy a larger capacity air conditioner, genuine goods to run well. It’s better than buying a cheap or broken air conditioner, every time I call a repairman, I feel like I’m venting my frustrations“, Hoang shared.

Just like Mr. Hoang’s house, Ms. Tran Lan Anh in Co Nhue, Hanoi has just been “hacked” by an air conditioner repairman when she called to repair her home air conditioner.

This woman said, on the day of her husband’s business trip to Saigon for two days, her air conditioner suddenly leaked water. She went online and found the phone number of a freelance air conditioner repairman. The technician came to see it and reported that the air conditioner sensor in her house was broken. Therefore, she agreed to let the worker replace all 1.8 million dong.

“When my husband came back, I told him that the air conditioner had a broken sensor, replaced 1.8 million, but he was startled. He said he was cheated by the air conditioner repairman. Then he blamed why he didn’t call his husband to ask someone he knew to fix it. Because for outsiders, if they want something broken, it will break“, Lan Anh said angrily.

The “sweet slash” moves of the air conditioner repairman

Mr. Long, an refrigeration repairman in Ha Dong, Hanoi, said that if the customer is an inexperienced person who does not know much about the electronics field, the risk of being deceived by an air conditioner repairman is even greater. They apply sophisticated tricks, from there, pocket more millions of dollars.

For example, they will buy cheap materials such as poor quality electrical wires and copper pipes and then “scream prices” at customers. Or during the maintenance process, they make up excuses for the machine’s breakdown to pickpocket extra bags of customers; or the air conditioner maintenance technician every time he comes to clean it, he also tells me to add gas while the gas has just been pumped in the last 6 months of cleaning. 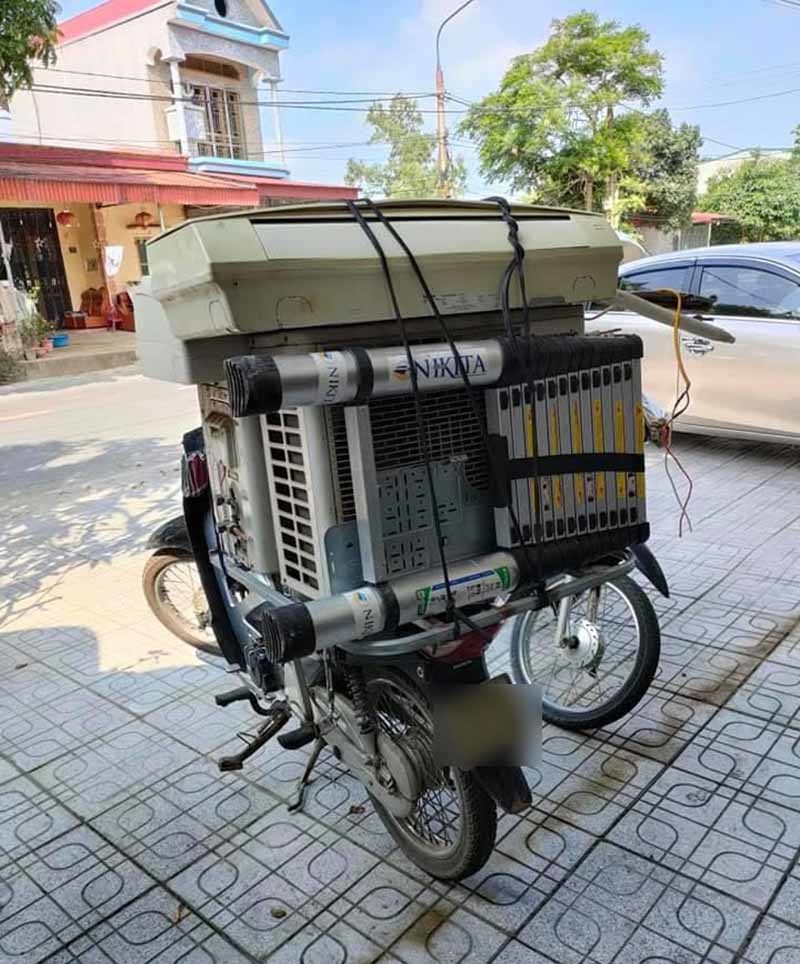 “In general, the majority of faults found by an air conditioner repairman are definitely not covered by the warranty. From there, they can only calculate money to be able to pocket separately. But when I returned, I reported to the company or the boss, they said they only repaired the air conditioner within the warranty period. Of course, not every worker has such a conscience“, Mr. Long said.

Regarding the reason why many air conditioner repairmen “chop” customers on hot days, Mr. Long explained: “It is also due to the greedy families. Normally, cleaning the air conditioner costs from 150,000-170,000 VND. However, many people criticized the high price, calling outside workers to maintain it for 100,000-120,000 VND. Therefore, many workers who come to the home to maintain the air conditioner deliberately “chop and cut” to gain any more money“.

Therefore, to avoid being unjustly pickpocketed when repairing and maintaining air conditioners on hot days, Mr. Long advised:Everyone should choose a mechanic they know or someone they know and can trust. In addition, should choose centers and shops that provide reputable air conditioning installation and repair services; Avoid cheap but call amateur air conditioners. Because when installing or repairing, if there is a problem, they are already running away“.

Another thing is that each person also equips himself with basic knowledge about air conditioning, common errors, and how to fix them.

According to the Vietnamnet