The version of the machine we used in the review is equipped with an Intel Core i5-10210U chip, with 16GB of RAM and a 512GB NVMe SSD. In terms of display, the laptop is equipped with a 15.6-inch screen with Full HD resolution and anti-glare treatment. Today’s article will review in detail the Lenovo ThinkBook 15 product line, thereby pointing out the strengths and weaknesses of the series. 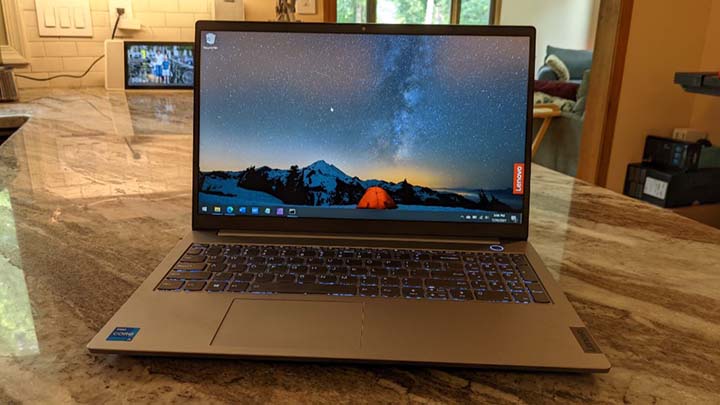 Unlike the ThinkPad models sold in the higher price segment, Lenovo equips the ThinkBook 15 series with an outer shell made mainly of plastic. While the keyboard area and lid are made of aluminum, the rest of the machine is made entirely of hard plastic.

The look of the Lenovo ThinkBook 15 is completed with a dominant gray color, giving the laptop a neutral and minimalistic look. This is the only color version of the ThinkBook 15 released by Lenovo.

Overall, the ThinkBook 15’s outer shell and screen cover details have a pretty good build quality and finish. The surface of the keyboard set sinks a bit when subjected to strong impact, but will not affect the daily use experience much.

The hinge system of the machine has a very good build quality, which can firmly hold the screen during use. The ThinkBook 15 is a relatively compact 15-inch laptop overall. For comparison, the Lenovo laptop is about the same size as the Dell Latitude 15 3590, HP ProBook 450. 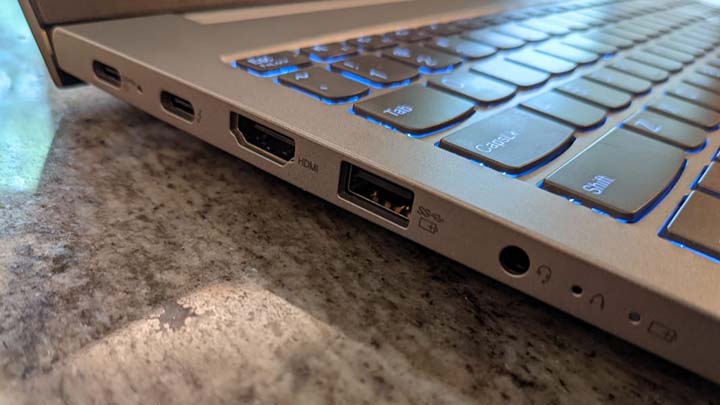 ThinkBook 15 is fully equipped with different types of connection ports, bringing many conveniences during actual use. Specifically, the device is equipped with a total of 2 USB Type-C ports, with both supporting DisplayPort and PowerDelivery technologies, but you will need to use the right cables and chargers to make the most of the potential. functionality of these two ports.

In addition, you can also use the machine’s HDMI 1.4b port to connect to an external monitor if there is no need to use the DisplayPort port. Equipped with a USB 2.0 port, you can use common peripherals such as an external keyboard or mouse if you want. 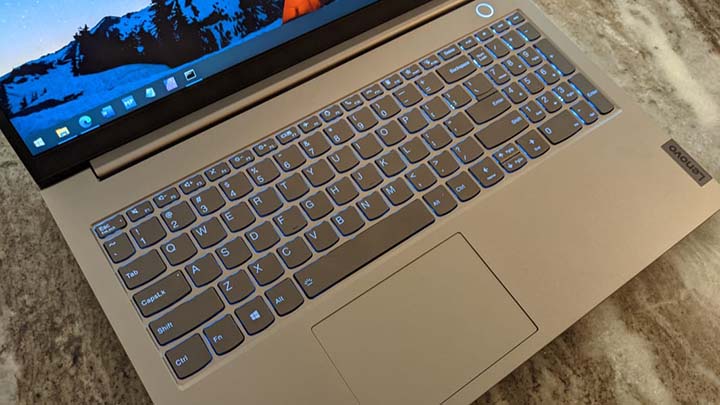 The keyboard has been one of the strengths of Lenovo laptops over the years. And similar to previously released models, the ThinkBook 15’s keyboard provided us with a comfortable typing experience. The machine’s buttons have a deep travel, while providing solid tactile feedback. The buttons and buttons of the machine are large in size and are widely spaced apart, allowing me to rest my hand naturally.

Located to the right of the keyboard, there is also a numeric keypad, which brings a lot of convenience if you are someone who has to do a lot of calculation work. The ThinkBook 15’s keyboard has a single minus point that is there is no lighting system underneath, making it a bit inconvenient to use the machine in places with little ambient light. 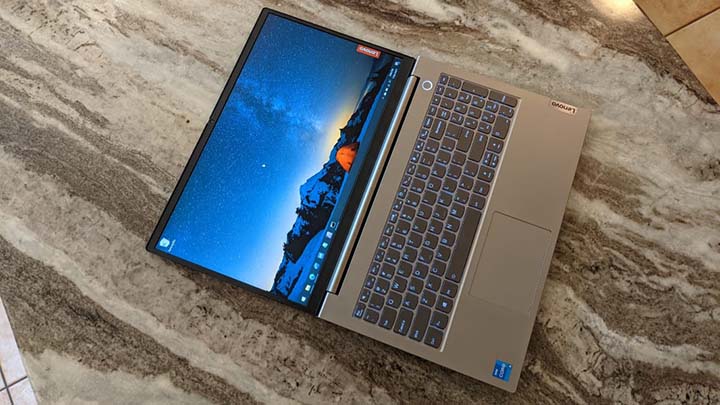 The ThinkBook 15 version that we use in the review is equipped with an IPS screen with a diagonal size of 15 inches. The panel has a default resolution of 1920 x 1080 pixels, equivalent to a pixel density of 141 ppi.

In addition to this IPS screen version, the machine also has a TN panel version. This version also has 1080p resolution, but has less brightness and contrast than the IPS panel of the model we review.

In our test, the ThinkBook 15’s average brightness level was 239 nits, slightly lower than the 250 nit announced by Lenovo. However, this panel has quite impressive contrast, with a score of 980:1 in our test.

The ThinkBook 15’s screen has a slightly high Delta-E color difference index and is not very impressive in terms of color coverage. So if you are looking for a laptop to use in professional graphic design jobs, look for another model.

The ThinkBook 15 delivers a level of performance that should handle any day-to-day workload well, at least for our configuration version. However, you should not expect too much from the performance level of the machine’s Intel Core i5-10201U chip.

Although 16GB of RAM and a 512GB NVMe SSD will help ThinkBook 15 quickly complete most of the workload, the machine’s heat dissipation ability somewhat hinders the performance level of the Core i5-10210U chip, making the laptop cannot operate at optimal level.

The ThinkBook 15 did quite well in our simulated performance tests. Specifically, in the performance test with PCMark 10, the Lenovo laptop scored 4248, higher than the average threshold of models in the same segment.

Lenovo equips Samsung PM981 SSD with 512GB capacity in our configuration version. The machine’s SSD is quite fast, and delivers outstanding results in benchmarks. Specifically, the machine has sequential read and copy speeds of 1789 and 1671 MB/s, respectively.

ThinkBook 15 is equipped with a 45Wh battery, similar to most laptops sold in the same segment. On our Wi-Fi web-surfing battery life test, the ThinkBook 15 lasted 6 hours and 46 minutes before shutting down completely.

ThinkBook 15 also owns an amazingly fast charging speed. Our review version can recharge to 80% battery life after just 45 minutes of plugging in. In addition, the performance level of the CPU is not slowed down when you use the device without the charger plugged in. 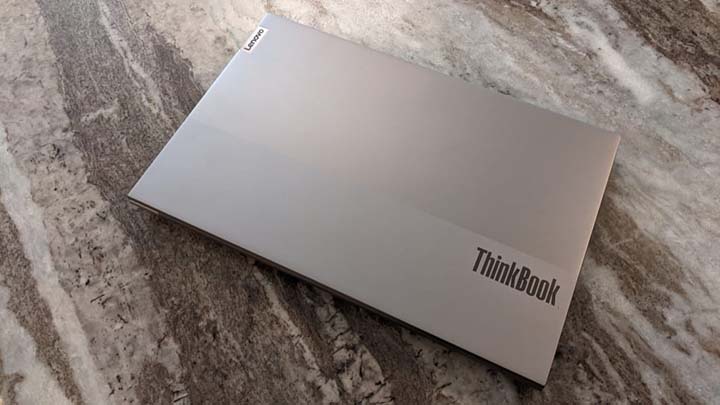 Sold in the mid-range price segment, the Lenovo ThinkBook 15 offers users a level of speed performance and a high level of value for money. The machine possesses a compact design compared to the 15-inch segment, providing high mobility for those who often have to carry a laptop with them. If you are looking for a reliable work laptop, then the ThinkBook 15 will be an option worth checking out.