Recipe / how to make stewed beef tendon and radish 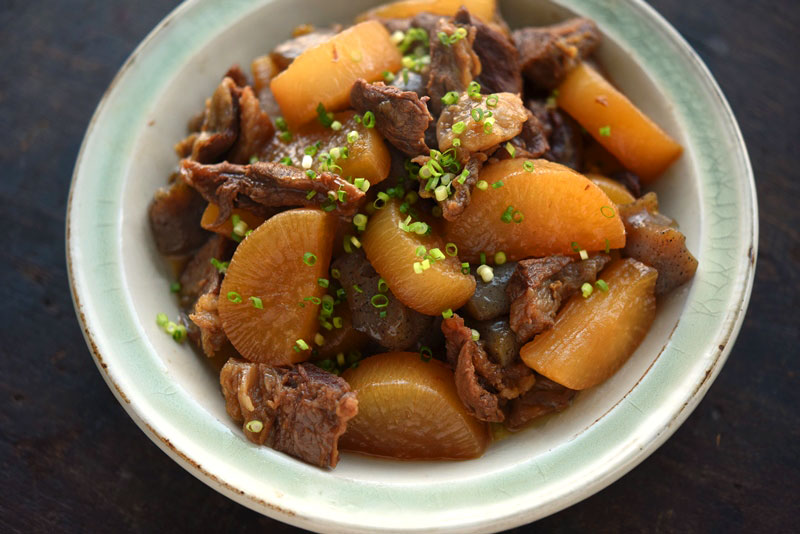 Sprinkle plenty of flavored radish and chopped green onions on the thick and soft beef tendon, and add a bit of pepper to your liking.

It takes time, but it is a very pleasing dish for dinner and as a main side dish, so please try it.

How to make stewed beef tendon and radish

Boil the beef tendon once, wash it under running water, add ginger, etc. and boil it in water for about 2 hours.

It can be frozen, so it may be a good idea to do it when you have time to get the beef tendon. Details are summarized in “How to prepare beef tendon”.

Peel the radish thickly and cut into half-moons with a width of 1.5 cm. Also, cut the boiled beef tendon into pieces that are easy to eat.

* Thickly peeled radish skin should be pickled in ponzu sauce! It will be a convenient and good chopstick rest.

Cut the konjac into bite-sized pieces with a spoon, sprinkle with a teaspoon of salt, leave for 5 minutes, and boil it for about 2 minutes. Raise the boiled konjac and drain it. → Refer to “Preparation of konjac”.

When the ingredients are ready, put the vegetable oil in a large saucepan, heat on medium heat, add radish, konjac, and beef tendon in that order and fry.

Fry for 1-2 minutes so that the oil spreads throughout, then1 liter of dilute soup stock and 4 tablespoons of sakeAdd the whole amount.

Increase the heat a little and wait for boiling, and when the lye comes out, scoop it lightly.

When it boils, reduce the heat (make the heat a little stronger) and then3 tablespoons sugarAdd and mix.* According to the basic procedure of simmered dishes considering the ease of soaking in the taste, add sugar first and add soy sauce later *

After adding the sugar, mix occasionally to even out the fire.Boil for about 30 minutes and cook until the skewers stick into the radish...

* Since the amount of broth is large enough, there is no need for a lid from the beginning to the end. However, it is better to mix the whole from time to time to make the fire even.

If the radish is cooked,5 tablespoons soy sauceAdd.Add soy sauce, simmer for about 10 minutes, then remove from heat and allow to cool completely...

Beef tendon radish is better when the taste is soaked in the radish, soA state in which soy sauce is contained and there is some juice before boilingThen let it cool down once. The taste will soak in while it cools.

* You can make it up to this state, put it in the refrigerator when the heat is removed, wrap it, and boil it for finishing a few hours or the next day. The interval between simmering and simmering is free, but in any case, let’s cool it completely to the core!

Put the once cooled pot on the fire again. When it boils, just reduce the medium heat a little,Boil down the broth while occasionally mixing in the pot for about 15 to 20 minutes...

When the broth is running low, reduce the heat a little and mix with a spatula or shake the pot.Complete by boiling until a little broth remains on the bottom of the pot.is.