Water radiators are not a far-off "hobby" for today's gamers. In particular, all-in-one (AIO) water radiators are an increasingly popular choice, as they are easy to install, user-friendly, and still keep efficiency and Beauty.

One of the big names when it comes to AIO radiators is Corsair, a brand based in California, USA. Corsair products are primarily in the high-end segment, and the H100i Platinum SE – the main character in VnReview's article today – is no exception. At a price of 4.5 million VND, the H100i Platinum SE is clearly not for the majority of users, but in return, what will you get?

Thank you Corsair for supporting the product for VnReview to carry out this review.

The design is "chic", elegant with pure white 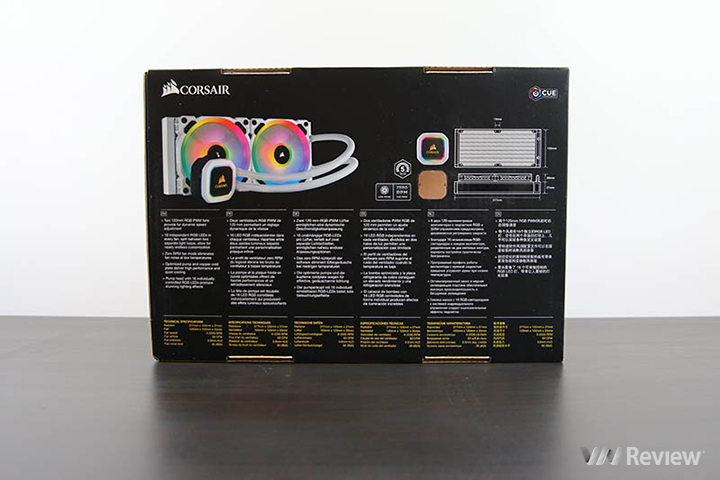 The case of the H100i Platinum SE is still in the Corsair's traditional style: it features black and gold tones, large-size product images on the top of the box, and the underside is the specs and outstanding technologies. available on the product. 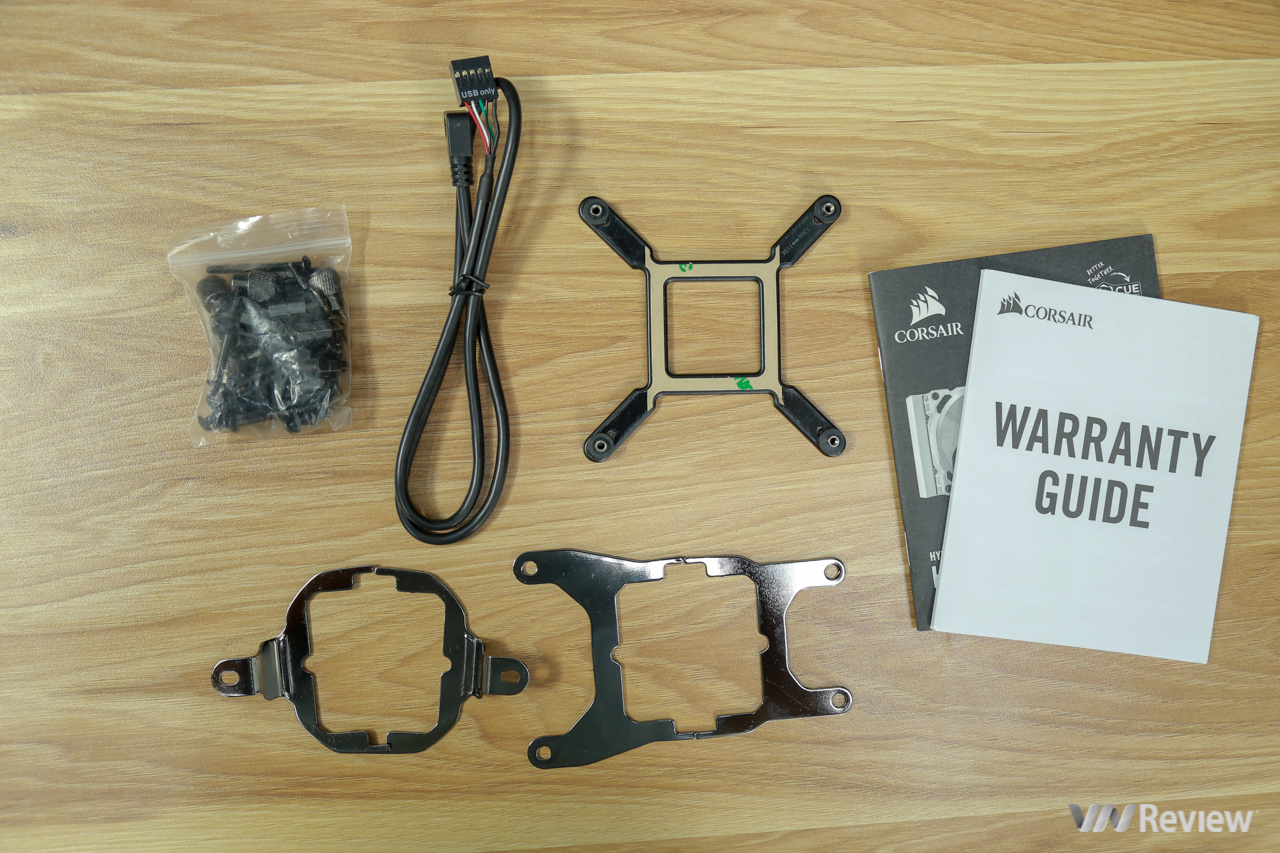 Inside the box are many accessories included, including screws, mounts, USB connection cables and manuals and warranty policies. The H100i Platinum SE supports almost all motherboards with enough current sockets, both Intel and AMD: AM4, 1151, 1151v2, … If your motherboard is not on the support list, maybe it's time to buy a new computer.

What I think Corsair could have done better in packaging is to clearly segment components for Intel and AMD motherboard systems. While the manual has very detailed visual instructions, it is quite difficult for users to "find" every suitable screw, especially new users. 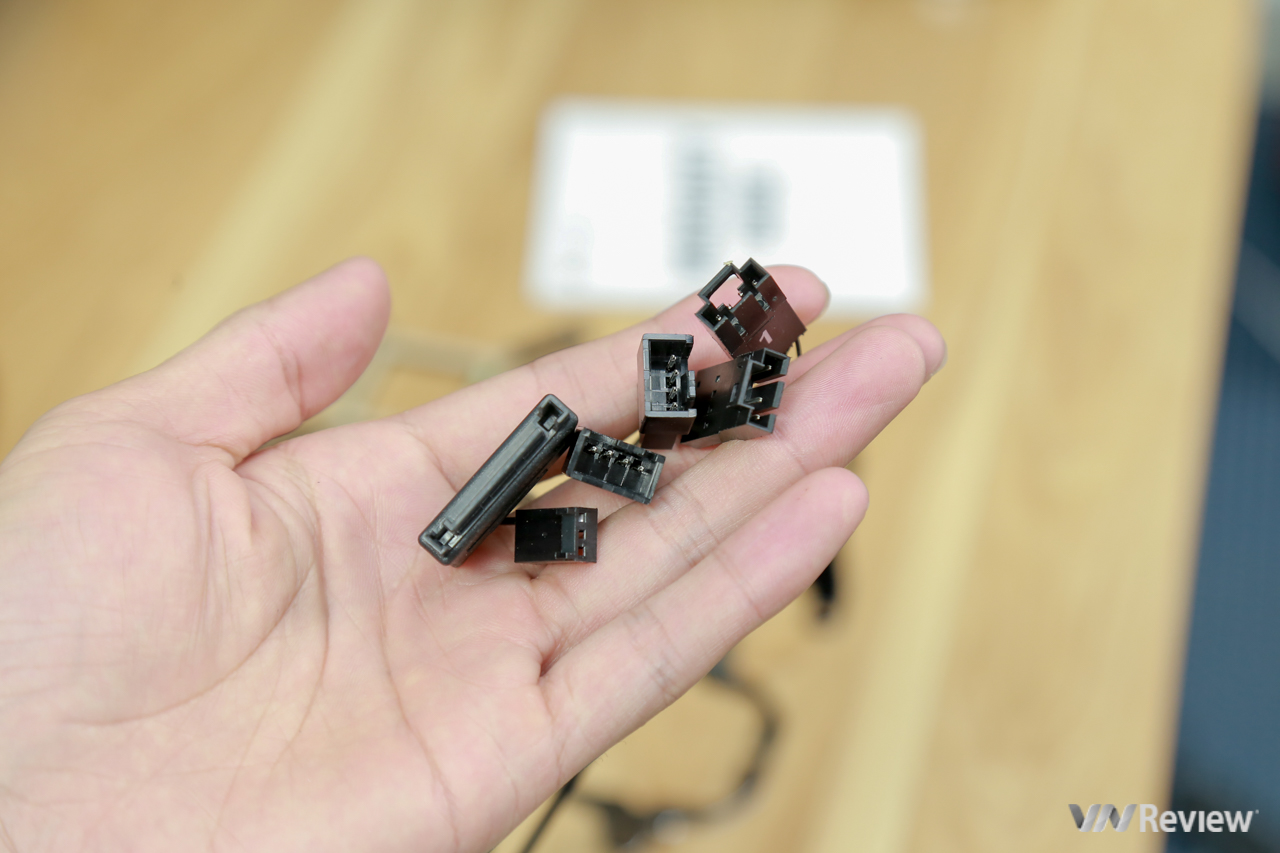 The product has a lot of wires connected, from the power cord to the RGB lamp, users will need to have a certain knowledge to know where to plug the wires and arrange the strings so that it is not affected by the review. fine of the system. 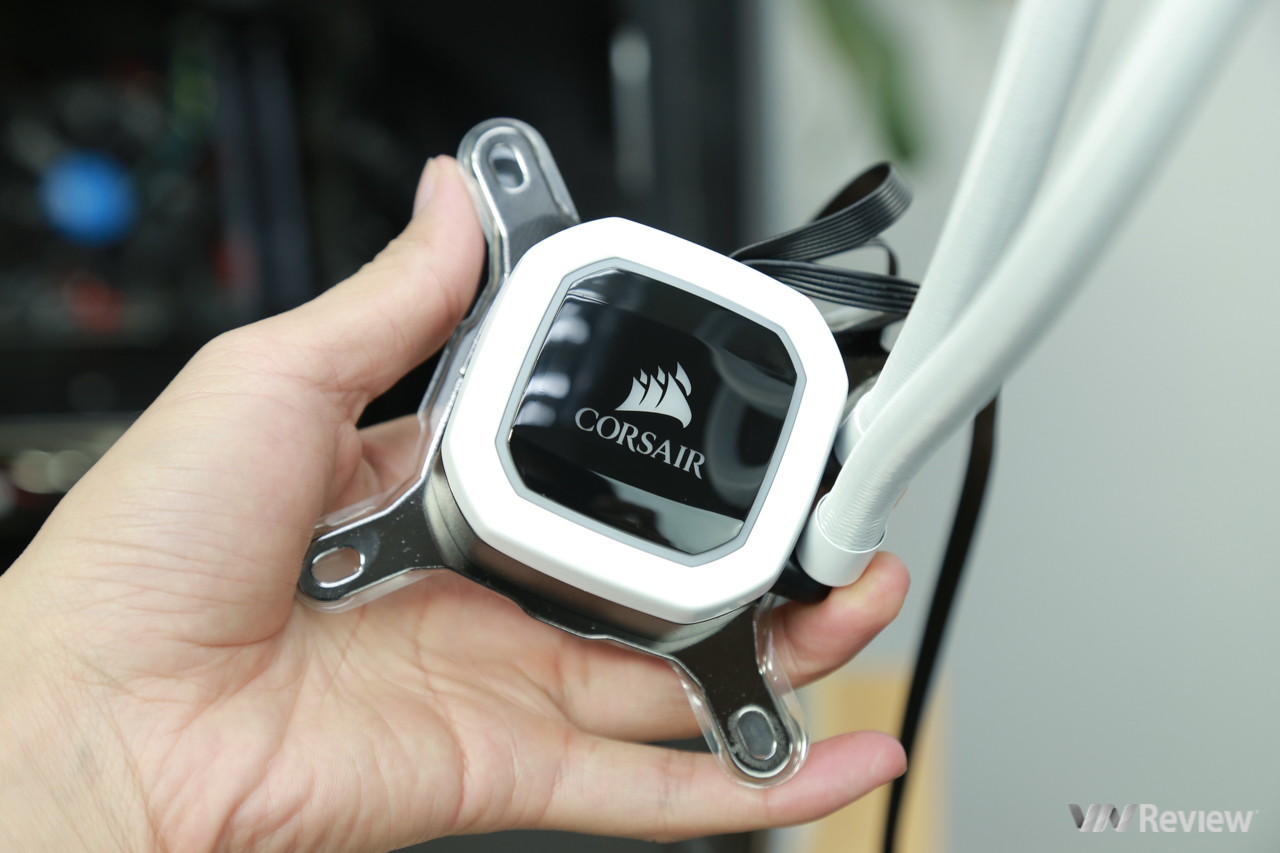 The heat sink of the H100i Platinum SE looks very subtle, beautiful with the dominant white tones, in the center is the Corsair logo. When "lights up", the white border and Corsair logo will be glowing and fully customizable. By default, the block block will be installed for Intel socket 1151 motherboard, so the system of VnReview does not need to install anything else, otherwise users will have to switch to another mount. 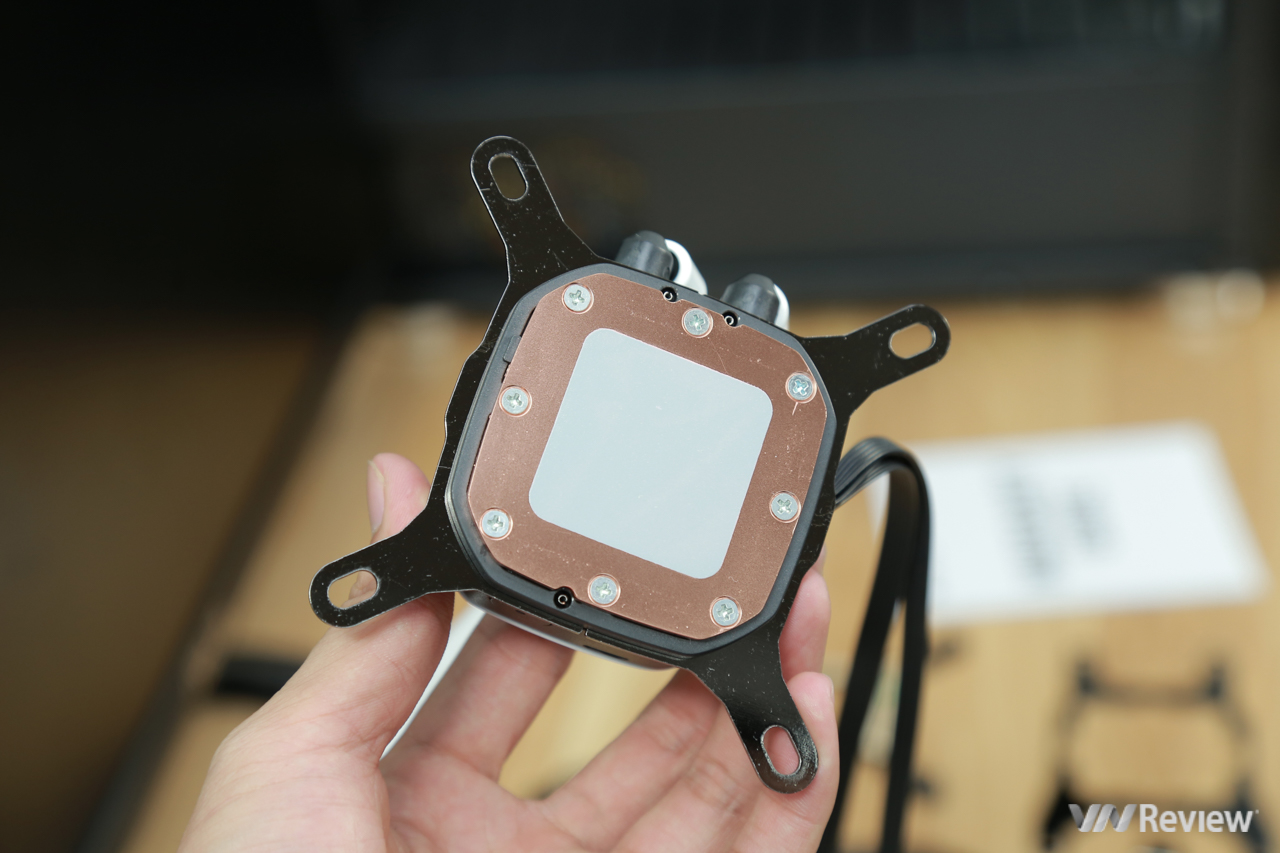 The CPU contact side of the block is a heat sink (cold plate) made of copper material, along with a ready-to-use thermal adhesive.

Internal structure of the block 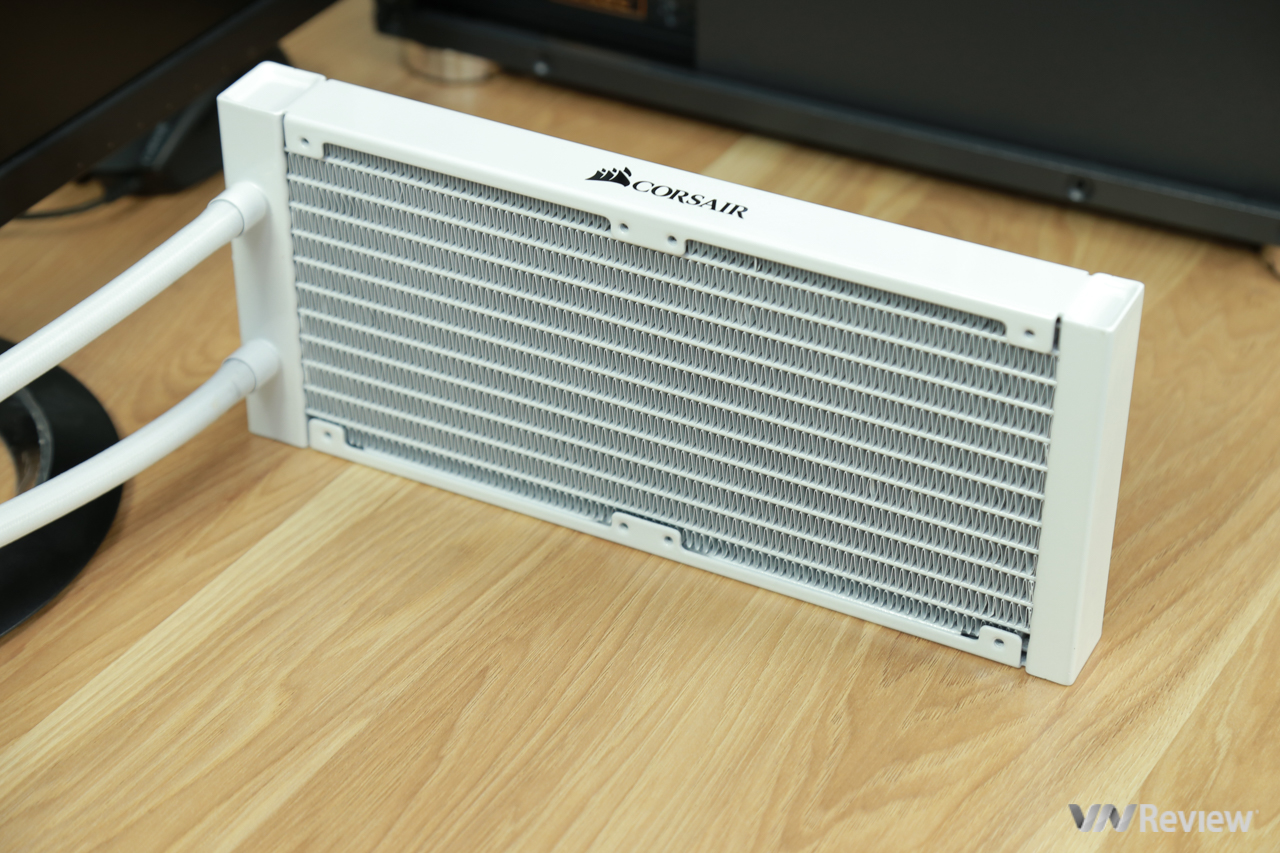 Rad radiator of H100i Platinum SE is made of aluminum, very sturdy, enough room for two 120mm radiator fans. If you don't like the Corsair's radiator fan (though I don't think there's any reason for you to do so), you can use another fan without problems. 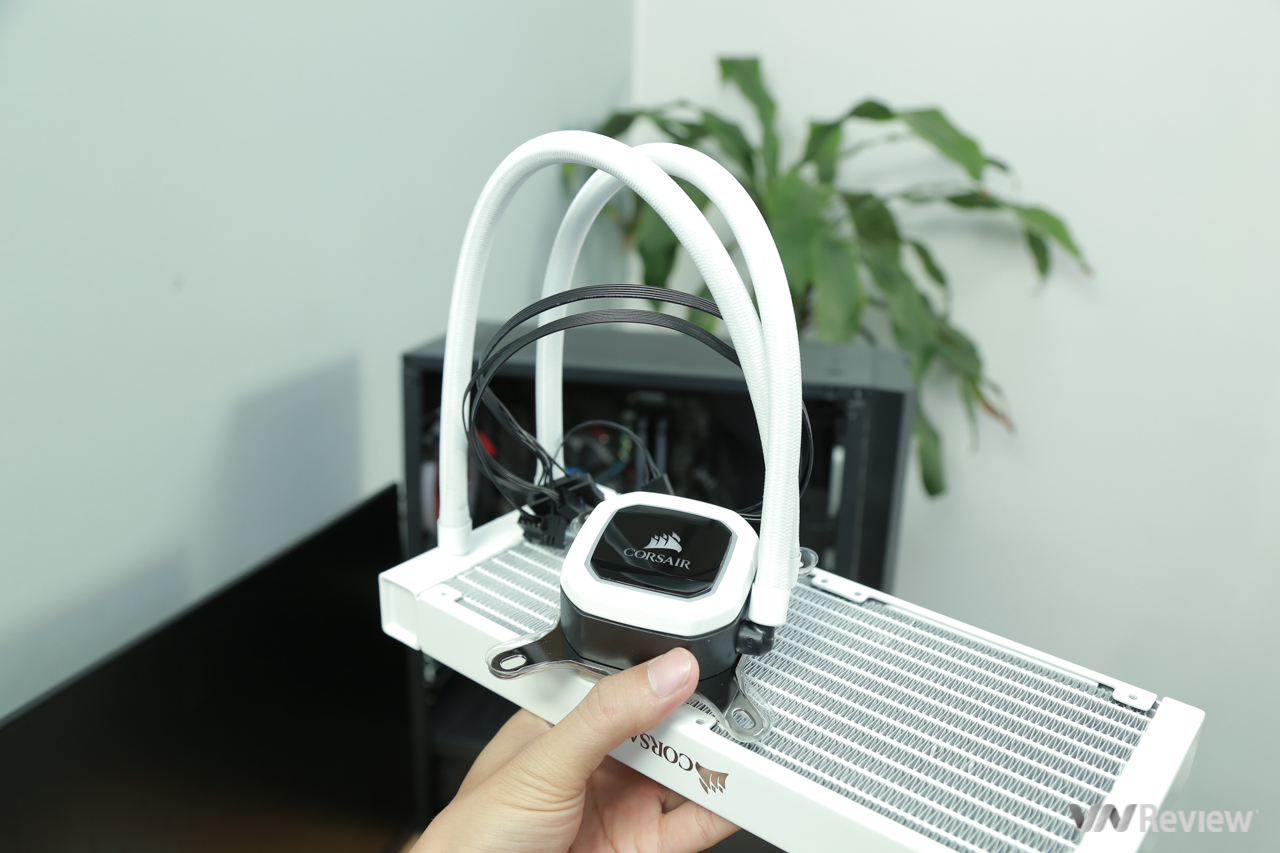 The H100i Platinum SE's two plumbing tubes are also white in color, sturdy, but still ensure flexibility, and with a length of about 35cm, you can mount Rad radiators anywhere in the case. as you like. 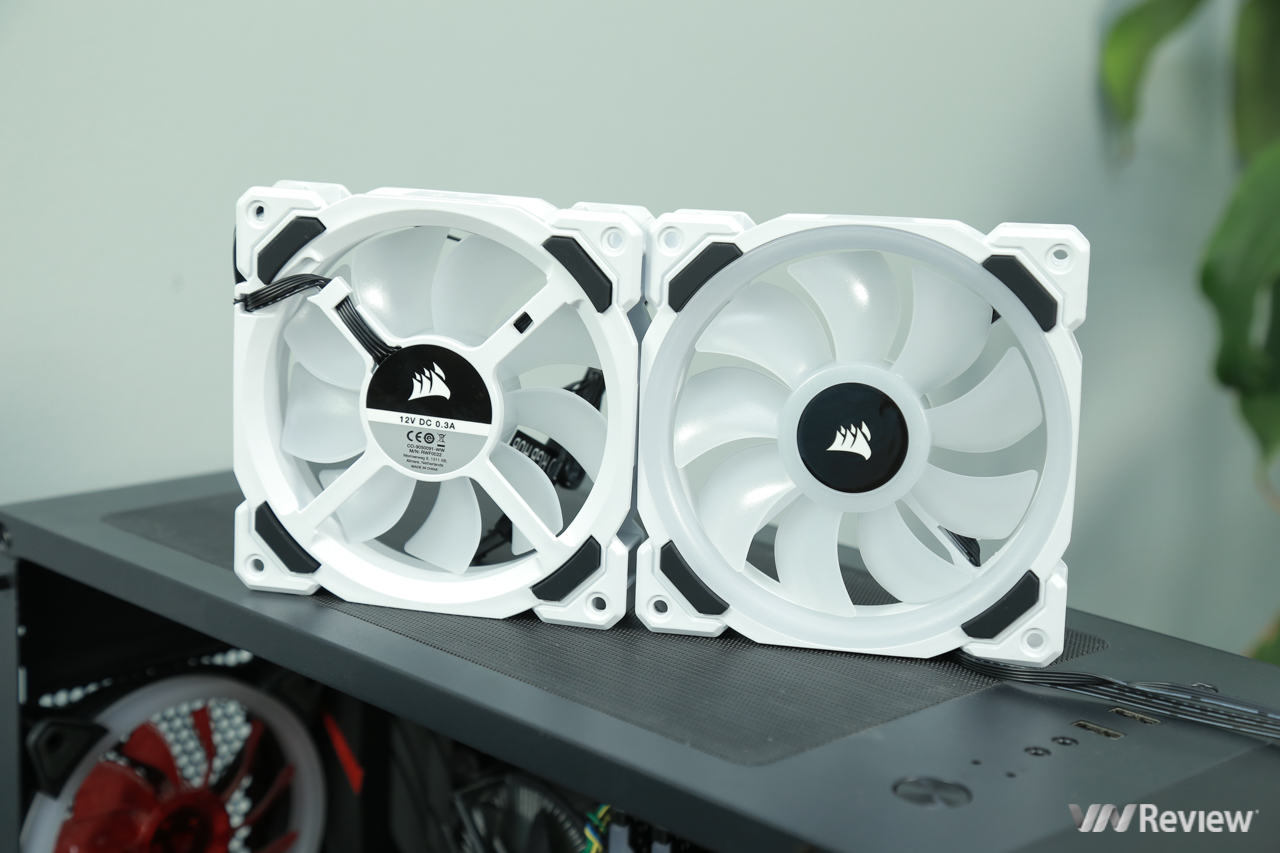 The two radiator fans included in the H100i Platinum SE are Corsair's LL120 series of fans with a total of 48 RGB LED bulbs for highly customizable, translucent rotors that also allow for more and more brilliant lighting. The rotation speed of these two fans is 300-2200 revolutions per minute (rpm), but when not needed, you can also turn them off with Zero RPM mode. It should be noted that the manufacturer recommends that when installing the radiator fan to Rad it should be installed so that the wind direction goes in the case to get the best effect.

In general, the H100i Platinum SE is an AIO radiator with a design that perfectly matches its price. Besides the neat and delicate white tones, the build quality of the components is as high as expected. 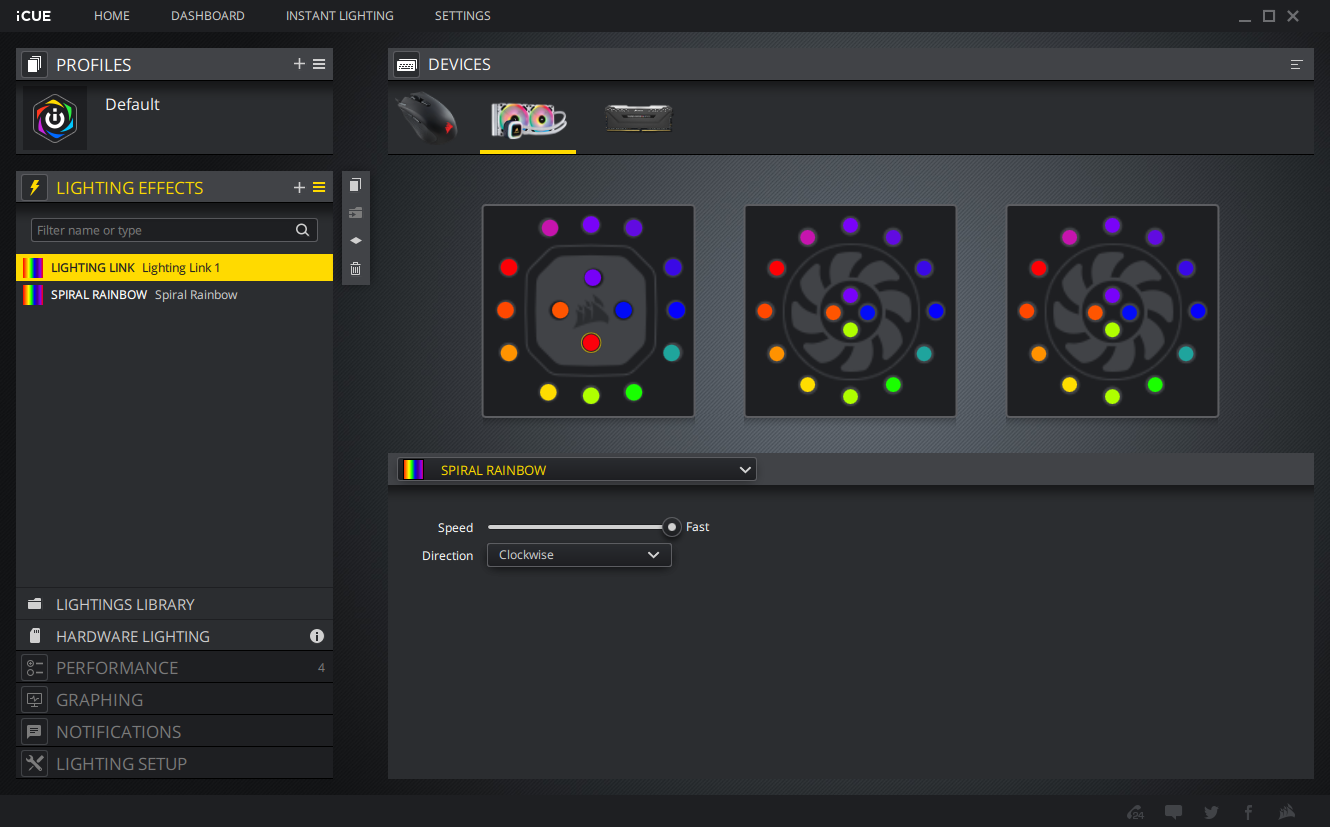 Ecology is a point where Corsair can be proud that they are not inferior to anyone. More than a year ago, Corsair officially "merged" two of its software, Corsair Cue and Corsair Link into a single software, Corsair iCue, which allows to calibrate and monitor all supported products. Support: RAM, keyboard, mouse, radiator, … An interesting feature of iCue is the ability to "integrate" with the synchronous systems of other brands such as Asus, MSI, Razer, … so You can completely sync your H100i Platinum SE with other brands and gaming gear without problems. 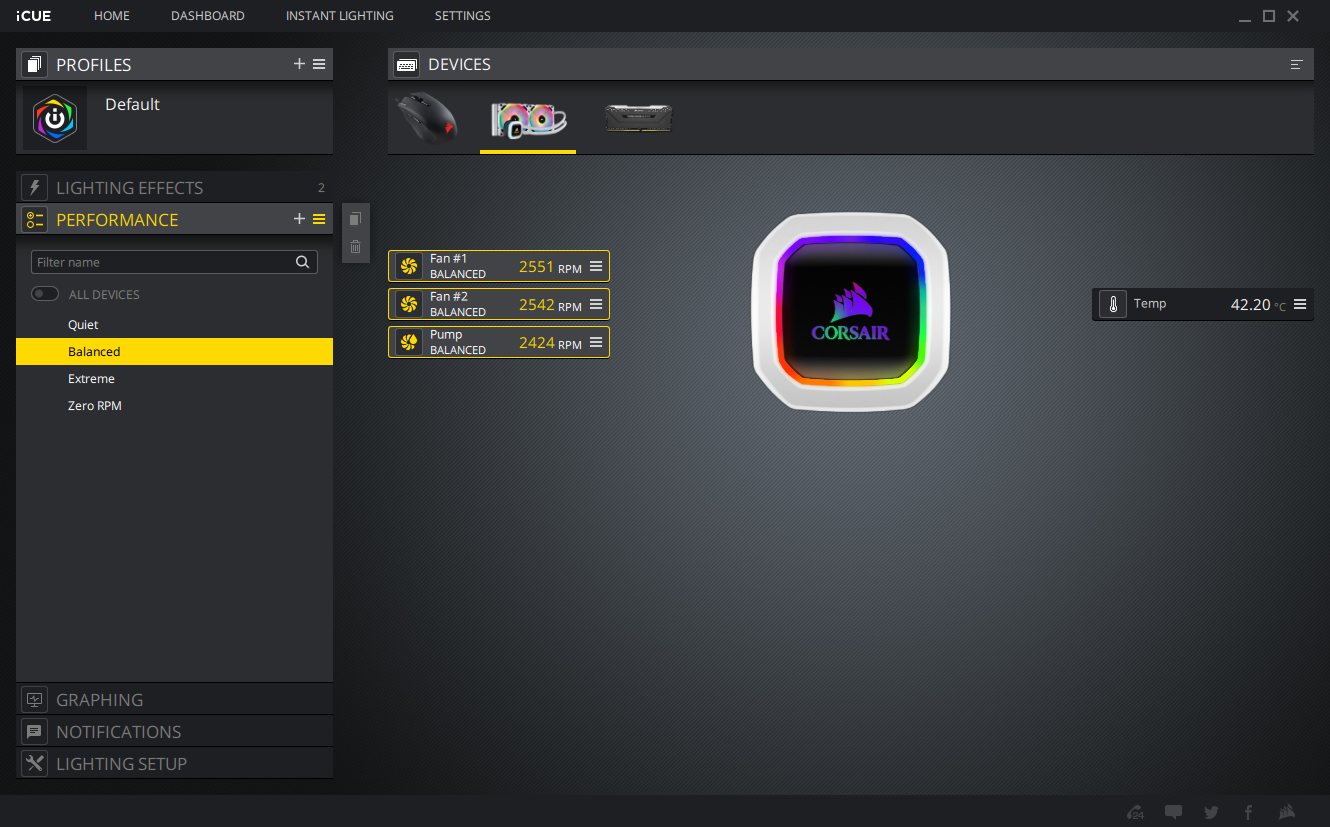 Customizing LEDs, fan speeds on iCue are easy and intuitive. There are some LED modes available on the software, but users can fully set their own mode and sync with other products (on VnReview system, there are RAM and Corsair's mouse). For fan speed, iCue offers 4 modes including Silent (quiet), Balance (balanced), Maximum (Extreme) and No rotation (Zero RPM). 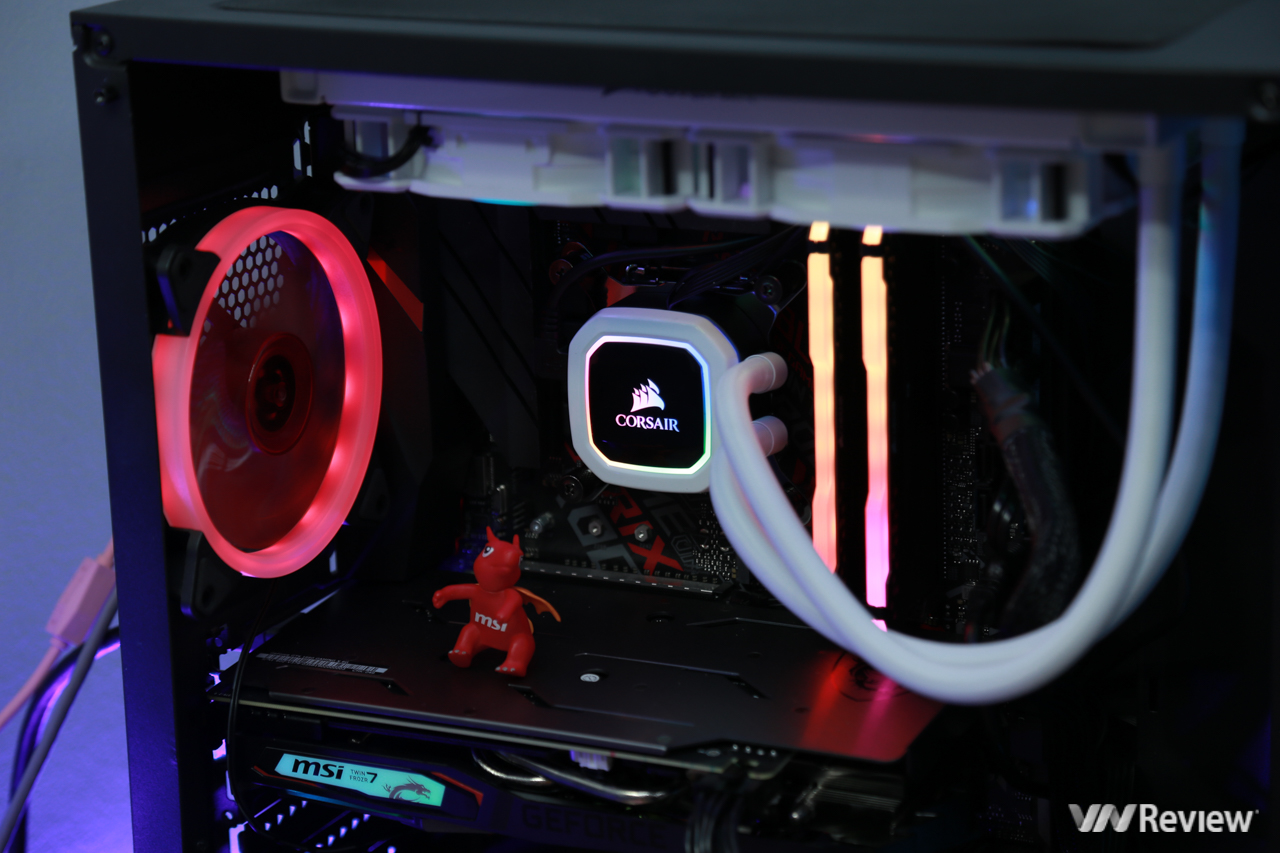 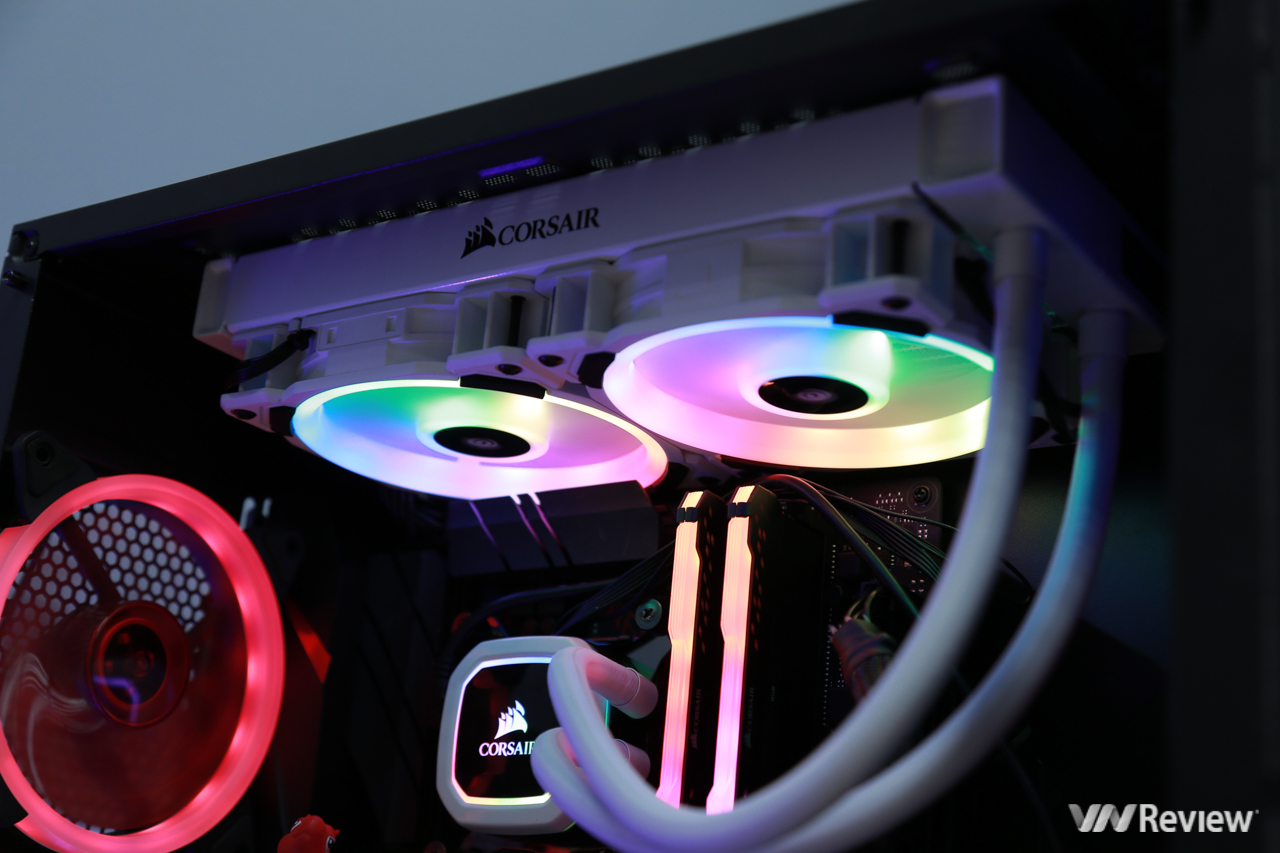 The H100i Platinum SE LED system must be very eye-catching. The light bulbs are bright, high brightness, which is different from the cheap cooling fans that writers add to decorate. The most unfortunate thing is that VnReview does not have the same white computer system to "cardboard" with this radiator.

To test the performance of the H100i Platinum SE, VnReview uses the system including:

About temperatureVnReview compared the heat level of the CPU using Intel's original radiator fan with two quiet and Maximum fan modes of the H100i Platinum Se in two cases: Idle (idle) and working at full capacity. (full-load). We use the stability test tool of the AIDA64 software to "force" the CPU to work, while monitoring the temperature via the sensor. 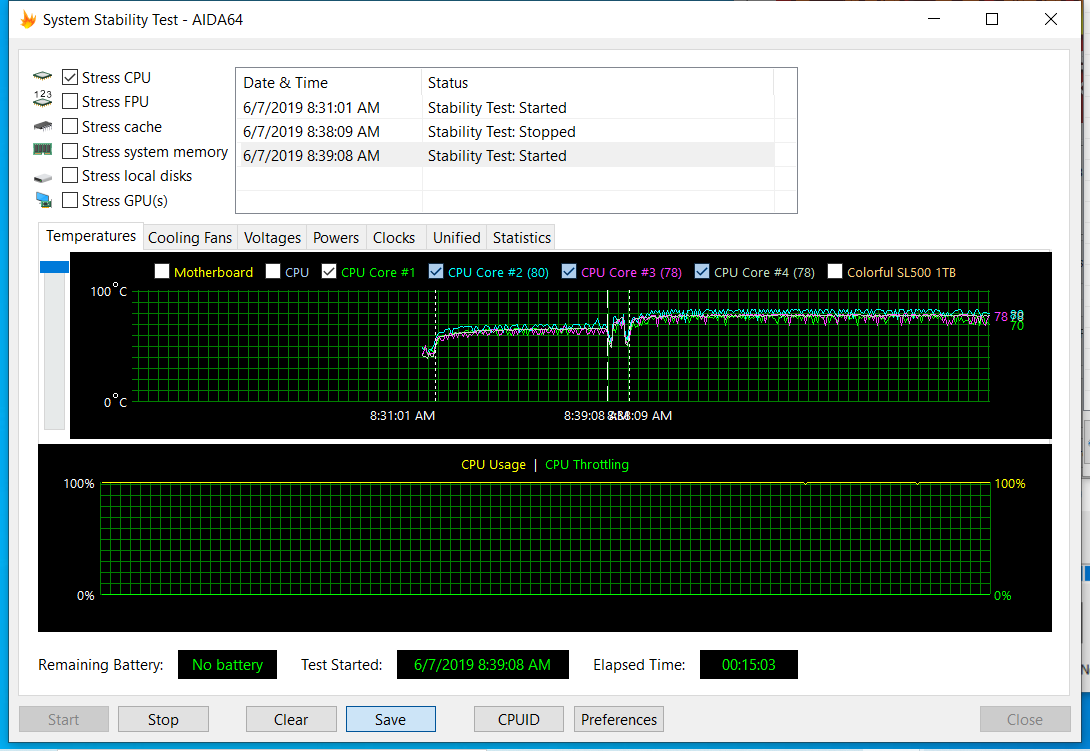 Test conditions in both cases are the same: closed case, with 3 decorative radiator fans negligible cooling performance. Room temperature ranges from 35-36 degrees, does not use air conditioning.

From the table above, we can easily see that the cooling effect of the H100i Platinum SE is superior to the original fan, although the Core i5 8400 chip is considered to be very cool. If the full load, the CPU temperature when using the original sink up to 80 degrees, the H100i Platinum SE is only 53-55 degrees. In addition, it seems that the Quiet and Maximum mode does not have too much difference in temperature. 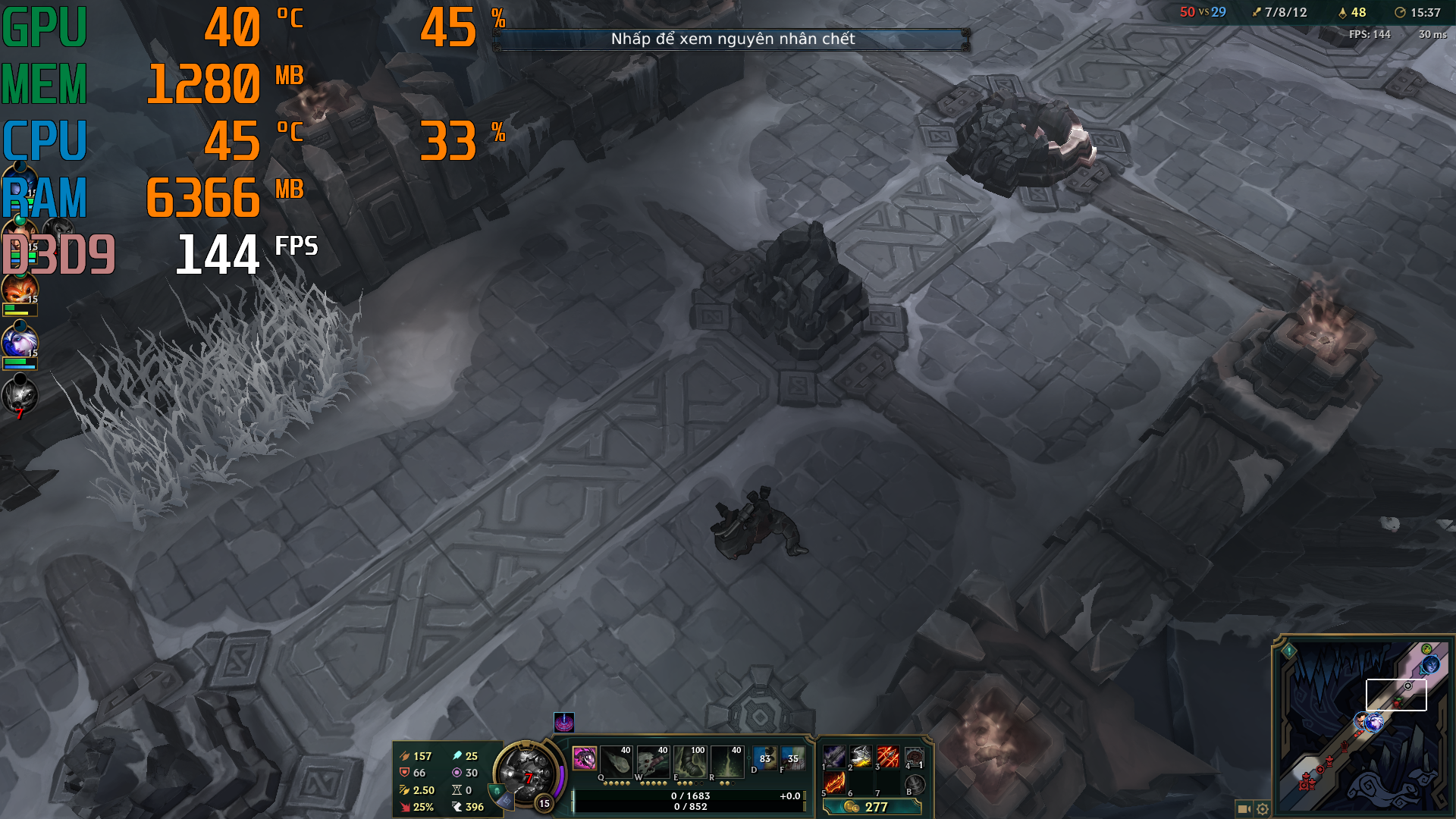 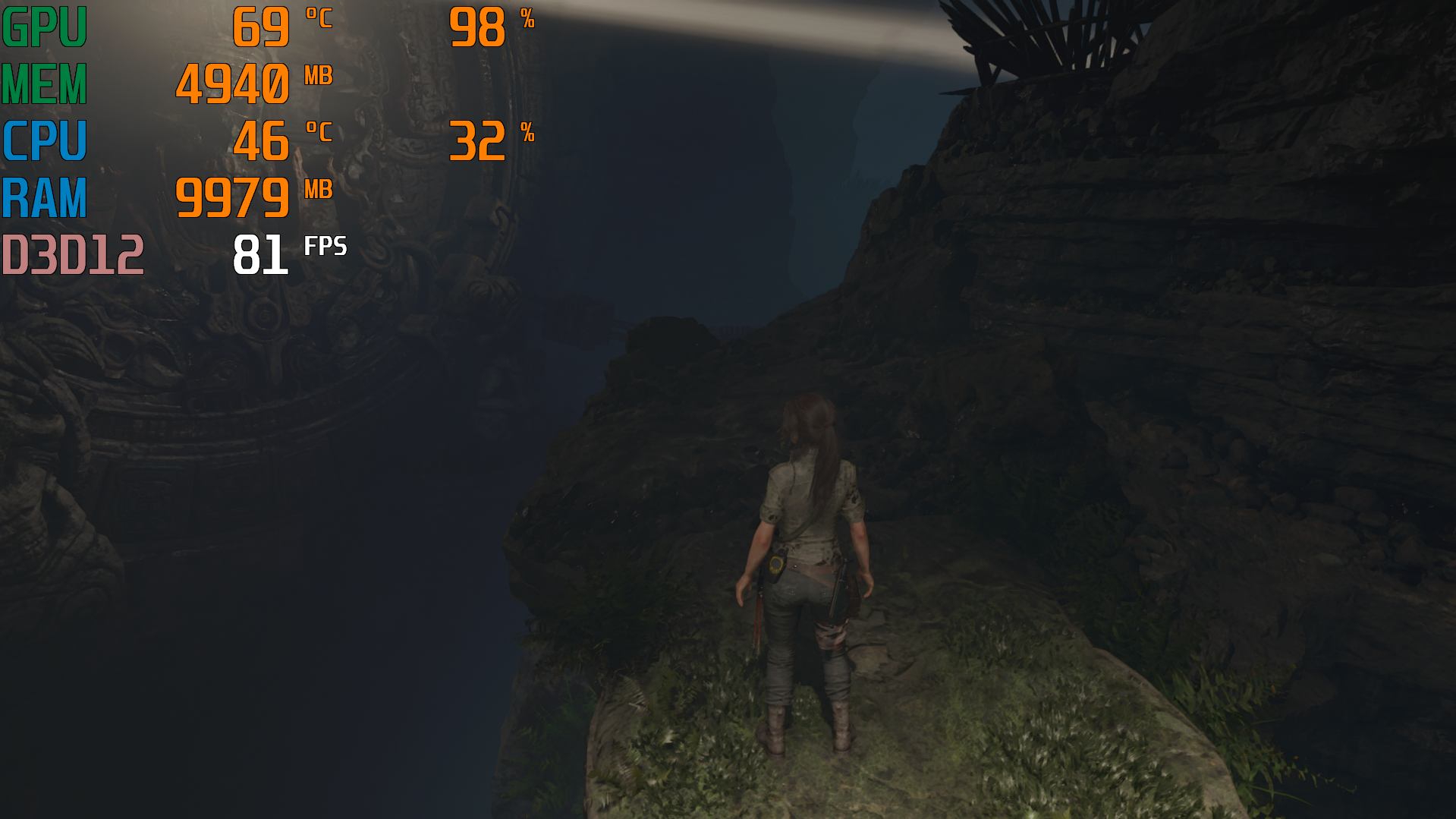 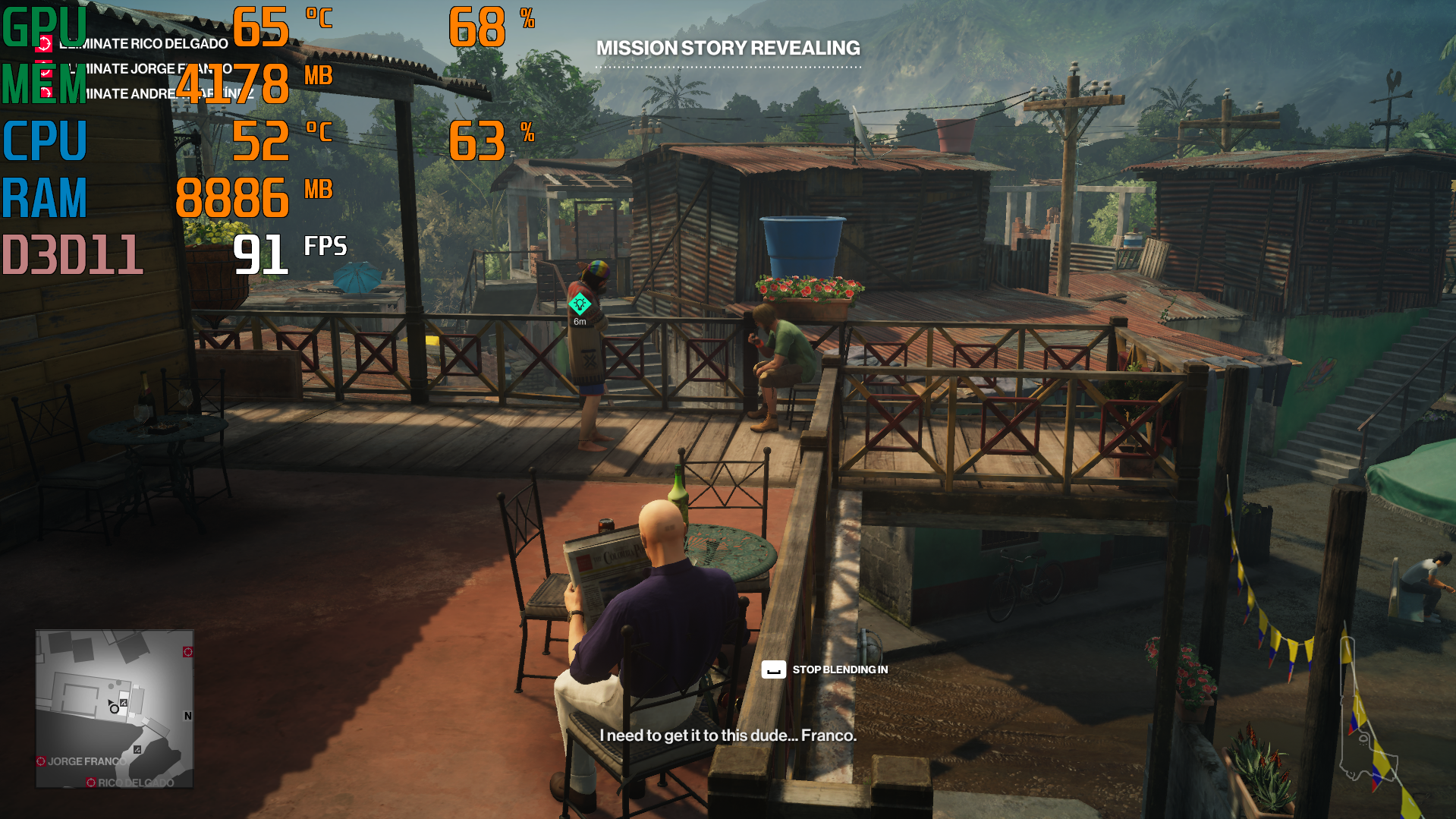 When playing games, depending on the amount of CPU load, the temperature only ranges from 44-45 degrees Celsius (Shadow League of the Tomb Raider) to 52 degrees C (Hitman 2). This is the ideal temperature level in weather conditions in Hanoi these days.

About noise, Since there is no dedicated measuring tool currently available, we cannot give exact dB numbers, but if your case is closed, the noise generated from H100i Platinum SE is negligible, even in max.

Summary: Worthy of "prince of the prince"

It's hard to find a true weakness of H100i Platinum SE. Corsair has brought a product that has both exquisite and high-quality design with pure white color and high efficiency. The biggest obstacle preventing users from coming to this radiator is an uneasy price, but the "any money" statement has never lost its accuracy.