The market share of Android tablets now exceeds that of iPad and that success has contributed greatly from Google. Since 2012, the company has launched two low-cost tablet PCs, contributing to the orientation of other manufacturers.

The Nexus 7 introduced by Google in the past two years is characterized by high configuration, using the latest Android version at the time of launch and attractive price. These advantages make Nexus 7 very popular, and this "high-profile, low-cost" strategy is also used by many manufacturers such as Amazon or Asus.

However, the Nexus 7 is still not the "iPad killer" – the iPad's direct competitors. To be able to face the iPad directly, Google and Android manufacturers in general need a more advanced device. Maybe it is Nexus 9. This device will be sold in Vietnam in November, with the expected price of 9.09 million for 16GB memory version, WiFi connection and 13.99 million for the final version 3G connection.

The Nexus 9 in the review of VnReview is a trial version, so some elements of hardware such as monitors and batteries may not be as complete as those sold on the market. We will update the review when the opportunity to experience the commercial version is expected later this month.

Although Nexus products are manufactured by many different companies, they still have a lot in common in design. The back of the machine uses smooth plastic material with Nexus letters engraved, prone to fingerprints. A metal contour running along the edges gives the Nexus 9 a more luxurious, sturdy feel. The hard buttons on the right side of the machine also use the same material, but the buttons are shallow so it's a bit hard to press. 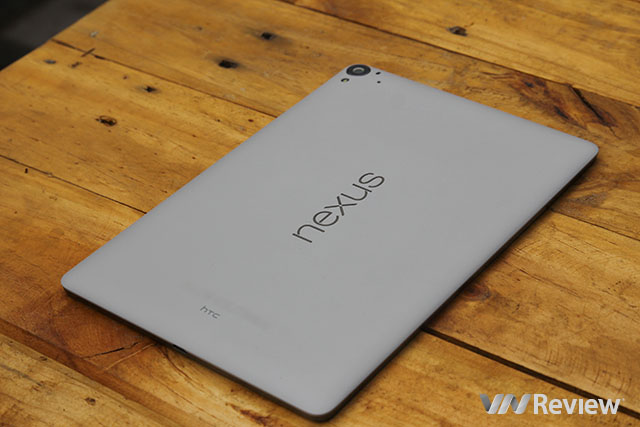 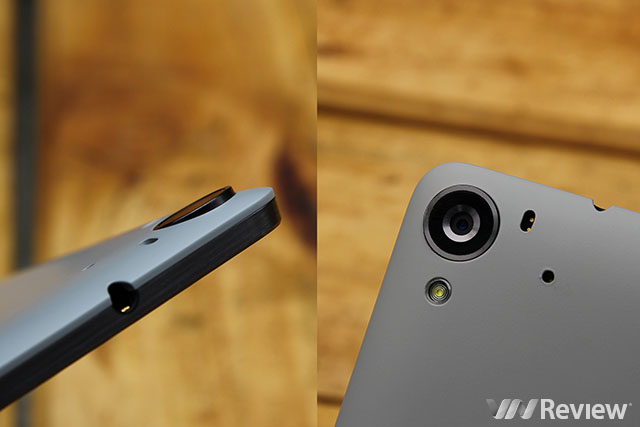 Convex cameras are details that can make users unhappy

On the front, the left and right sides when placed horizontally are quite thick, so when used, users can put their fingers comfortably. The other two edges are thinner, slightly affecting the grip when using one hand. The device with dual speakers on the front is like high-end HTC phones, but it is submerged, not too much like on the phone.

Due to the use of a 4: 3 scale screen, the Nexus 9 is more square, not as long as many other Android tablets. This helps the machine more compact, especially when holding the device horizontal. However, due to the use of 8.9-inch screen, up to 15.3 cm across, users can hardly hold and use the Nexus 9 comfortably with one hand. When using one hand, small tablets like iPad Mini or Nexus 7 will be easier to use. 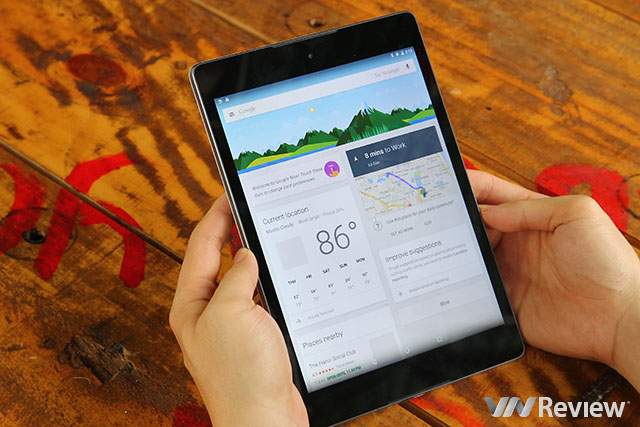 Screen aspect ratio is the biggest difference on Nexus 9. While most Android tablets have a 16: 9 or 16:10 aspect ratio, the Nexus 9 has a 4: 3 aspect ratio, much like the iPad. . The device's resolution is 1536 x 2048 pixels, exactly the same as the iPad; Due to the smaller screen, the pixel density of the Nexus 9 is also slightly higher. 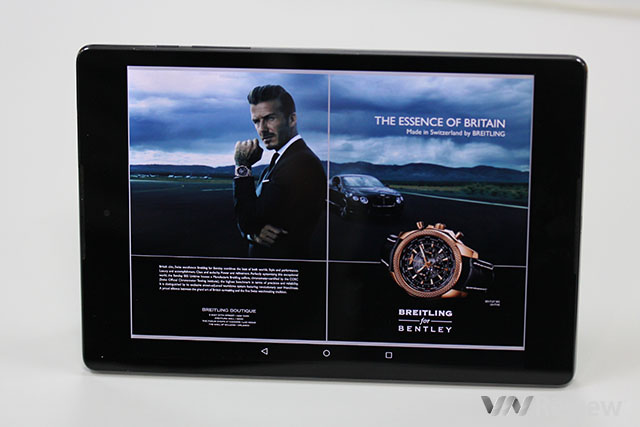 4: 3 aspect ratio is suitable for reading or surfing the web

This aspect ratio is suitable for web display, social networking applications like Facebook and reading. However, when watching movies, the screen will appear less effective than those with 16: 9 aspect ratio screens. The width of the device will also be longer than that of a screen with the same size but a ratio of 16: 9, so holding a hand will not be as comfortable. 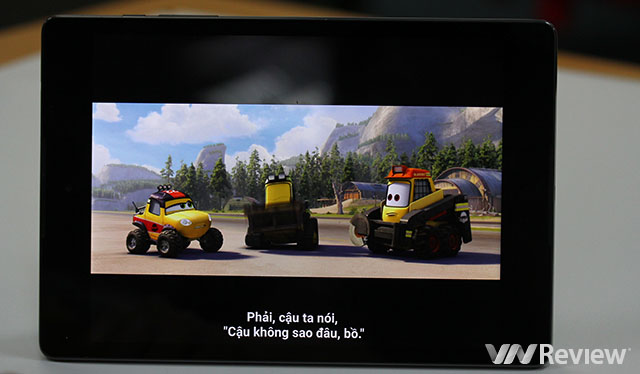 However, when watching the movie, this screen is less effective than the 16: 9 ratio

Resolution over 3 million pixels seems a bit redundant on smartphones, but for a tablet like Nexus 9, this is a reasonable upgrade. The pixel density at 280 ppi makes the screen display sharp and detailed. The maximum brightness of this tablet screen according to our measurements is 426 nit, enough to see outdoors. The view of the wide screen, at very narrow angles, remains unchanged.

When using a dedicated monitor device, the results showed that the Nexus 9 screen was still slightly misleading when displaying colors. However, the reason may be that the Nexus 9 we use is a test version, so the hardware elements are not yet complete. VnReview will update the screen evaluation results with Nexus 9 official version in the future. 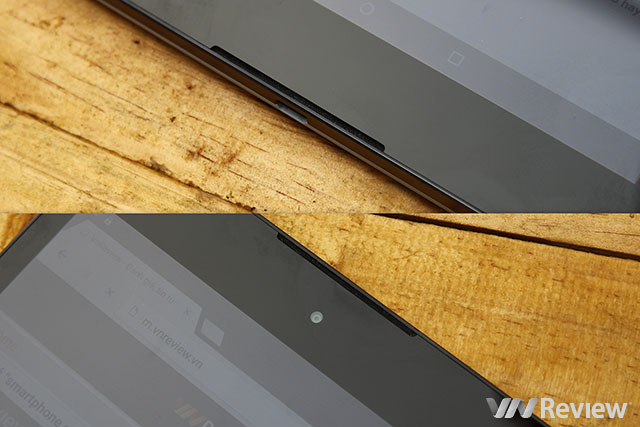 Nexus 7 has been equipped with dual speakers in 2013, but is placed on the back of the device. The Nexus 9 is equipped with dual speakers on the front, providing a more impressive sound experience. The speaker of the phone has a high volume, reproducing sound well thanks to two speakers separated from each other but towards the user. This is a big plus for the Nexus 9, as many people use tablets to watch videos and listen to audio through external speakers. 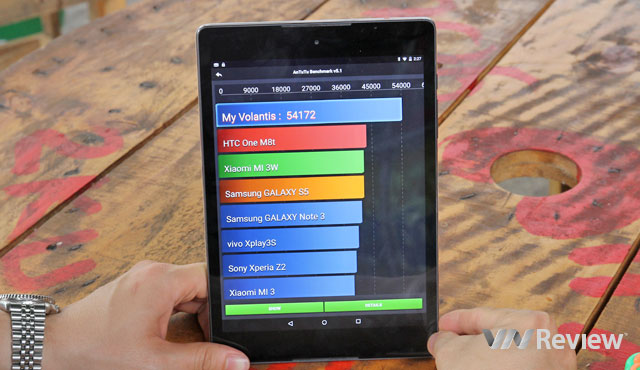 Nexus 9 is equipped with Nvidia's integrated processor (SoC) 64-bit Tegra K1, including two processor cores at 2.3GHz and 2GB RAM. Powerful configuration helps Nexus 9 smoothly handle all tasks on Android, from gaming to image processing. 2GB RAM capacity is also sufficient for multitasking multiple applications at once (playing games, surfing the web, reading books), but the application does not get out. 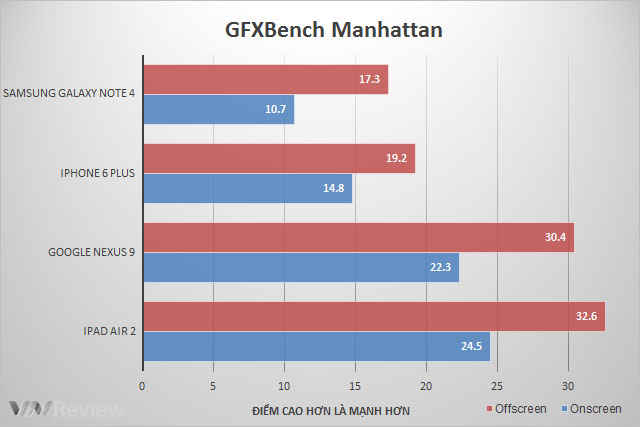 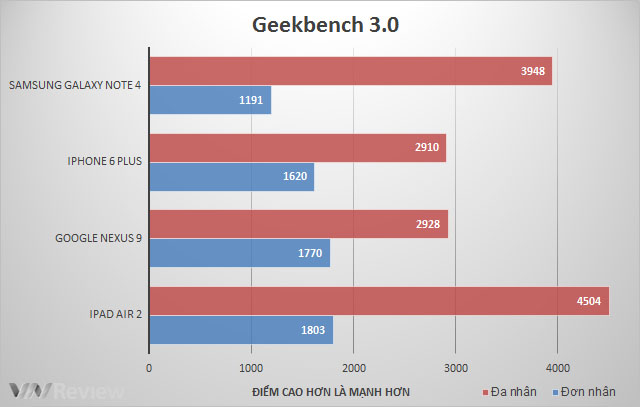 With performance evaluation apps, the Nexus 9 also scores very impressive. The scores below show that the machine has single-core CPU performance and very high graphics performance. These are important factors for tablets, which are used by many people to play games. However, the device heats up quite quickly, if the game weighs about 20 minutes, the back of the camera near the camera will be so hot that it is uncomfortable.

The camera on the Nexus 9 has an 8 megapixel resolution, has a flash support, and the ability to shoot movies in Full HD resolution, while the front camera has a resolution of 1.6MP and 720p movie recording. The camera's camera interface is minimalistic, including just one photographic button on the right side. Users do not have much customization when using the original photography application, only some basic shooting modes such as panorama, sphere or lens blur. 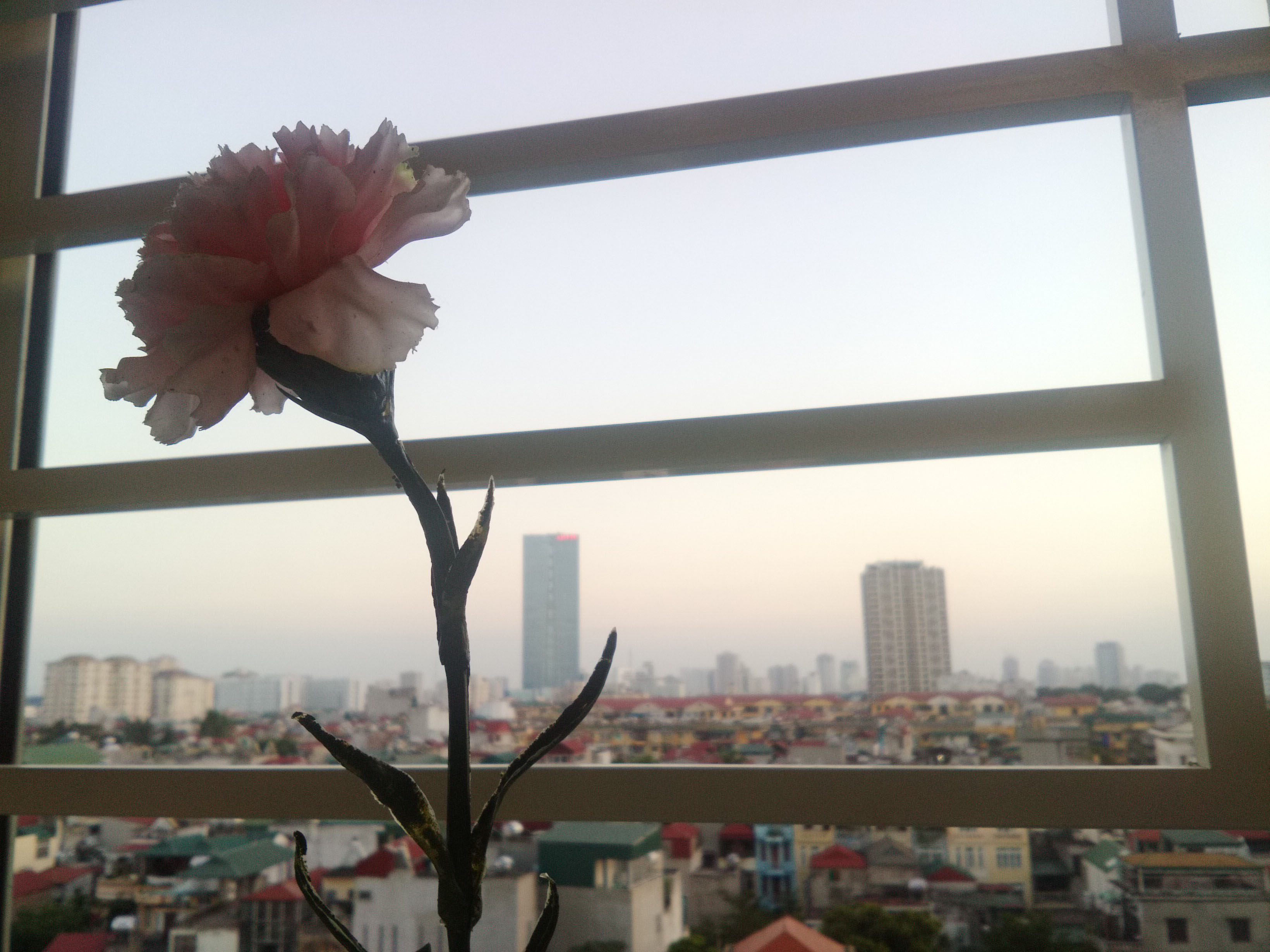 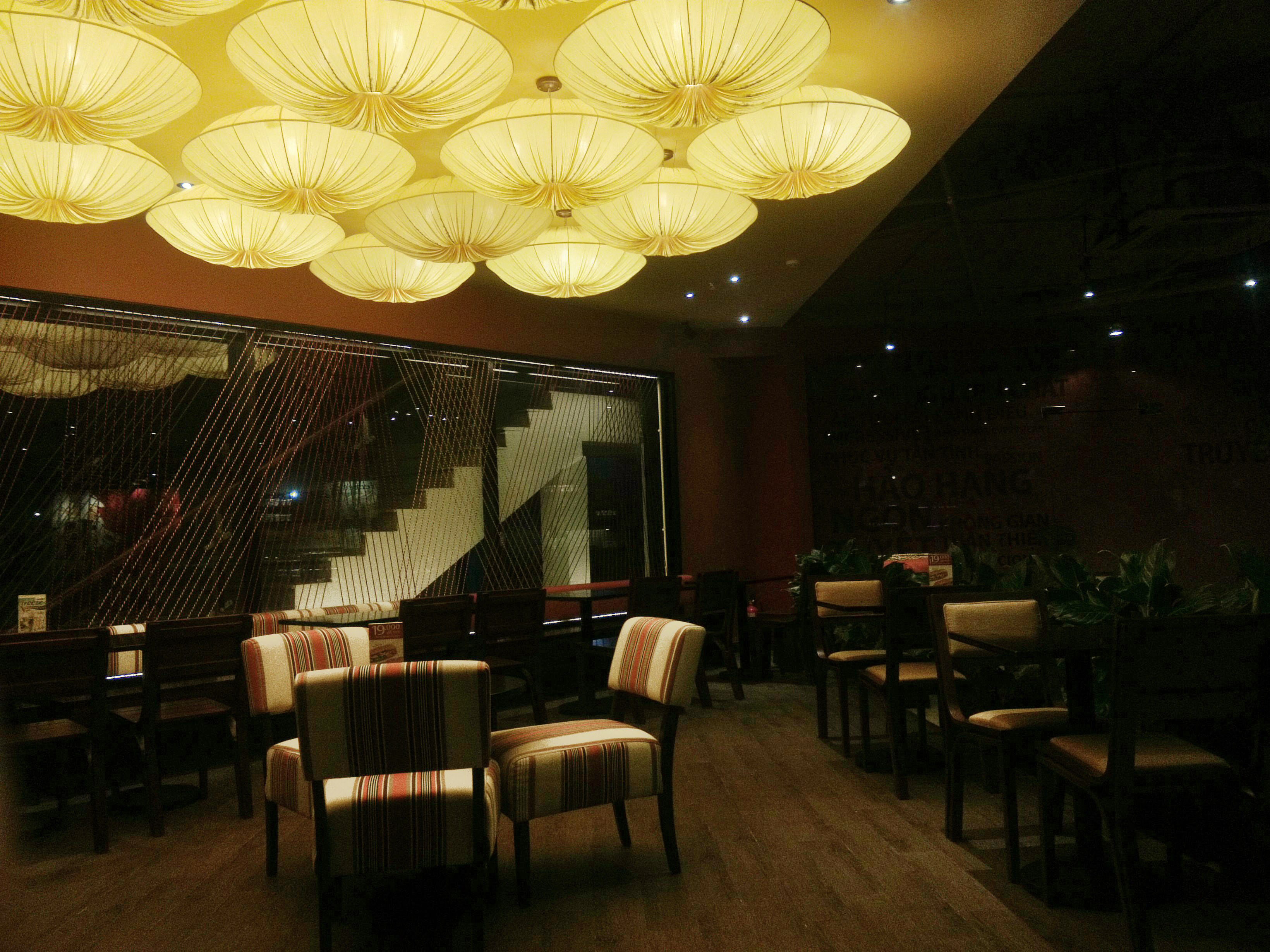 The quality of photos taken by Nexus 9 is quite good, especially when compared to tablets. However, the focus is a bit slow, and the software also lacks the options for a better picture when shooting. In addition, holding a very large tablet to take pictures cannot be as comfortable as holding a phone.

Nexus 9 comes pre-installed with the latest Lollipop 5.0 Android update. The biggest change of this version is in the interface, with the design language called by Google Material Design. Lollipop apps and icons look flatter, colors are arranged so that users can easily distinguish different parts or content of the application. Google has also carefully researched to make reasonable animation effects, close to users' usage habits. 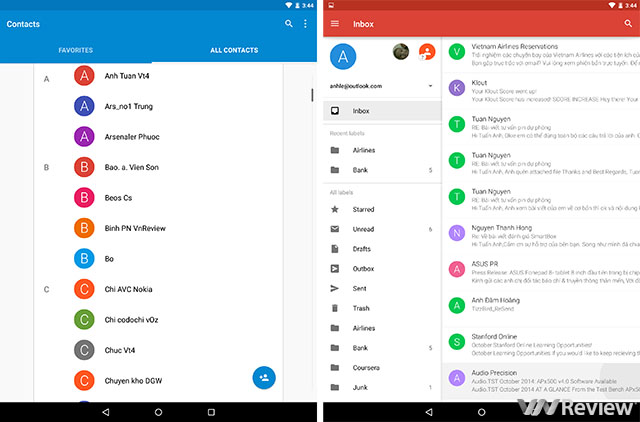 Most Google applications have an update with the Material Design interface

Inside the app, different contact names or photo albums also have different colors, for users to be more distinctive. Original Google applications, such as calendars, Gmail or computers, also apply the new interface. Google also provides tools for developers to develop third-party applications that interface to the Material Design language. 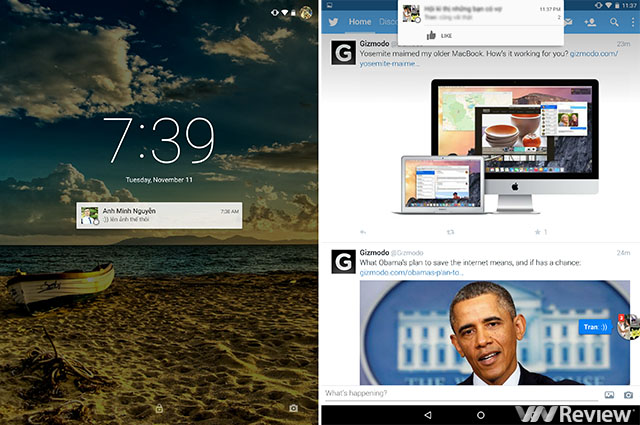 Google also allows quick notifications on the screen, when another application is running full screen. Users can read, interact or turn off notifications without leaving the running application. 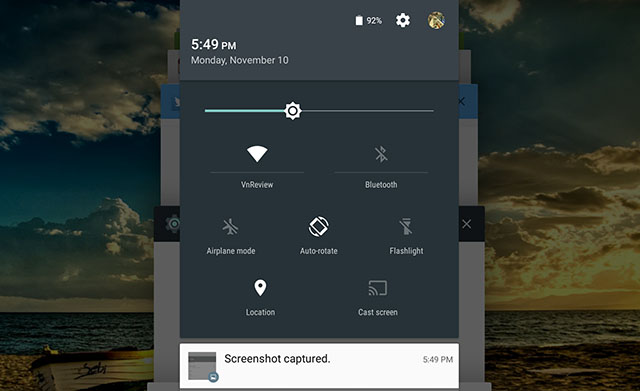 The neatly re-arranged Lollipop quick setting section, including only basic connections and two new applications, are flashlights and screen shots. The multitasking interface on Lollipop is called Recents, with stacked card styles that help users see the nearest application. Recents also display open tabs in Chrome, or the search results closest to Google 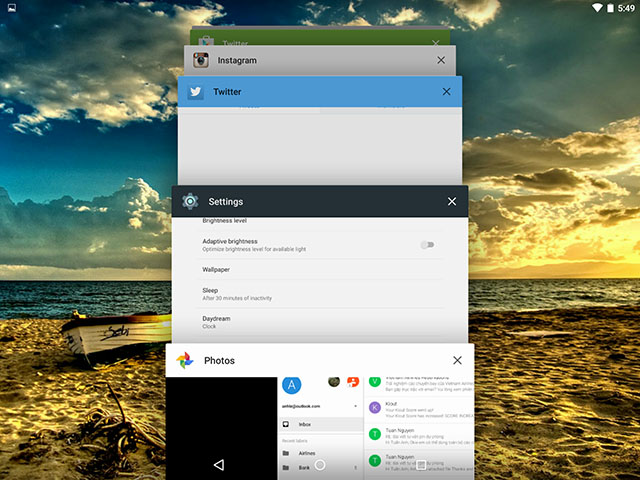 Lollipop also adds a non-disturbing mode, which allows notifications to be turned off for a specified period of time. Google also added battery saving and analysis mode to the Project Volta project, but in a short time we have not evaluated the battery difference on Lollipop compared to Kit Kat. 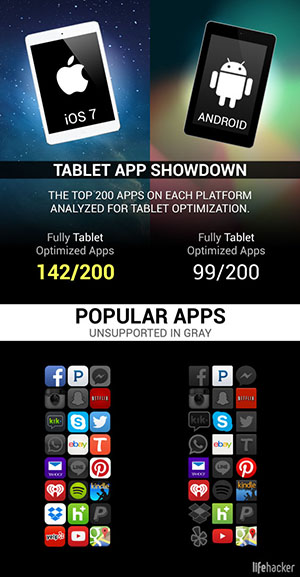 The tablet-specific applications are still the point of iPad superior to Android. In a statistic due Lifehacker made in August this year shows that 142/200 most popular apps on iOS have a dedicated iPad version, while that of Android is only 99/200. Very popular apps like Facebook or Dropbox haven't taken advantage of the Nexus 9's wide screen space, as you can see in the picture below. 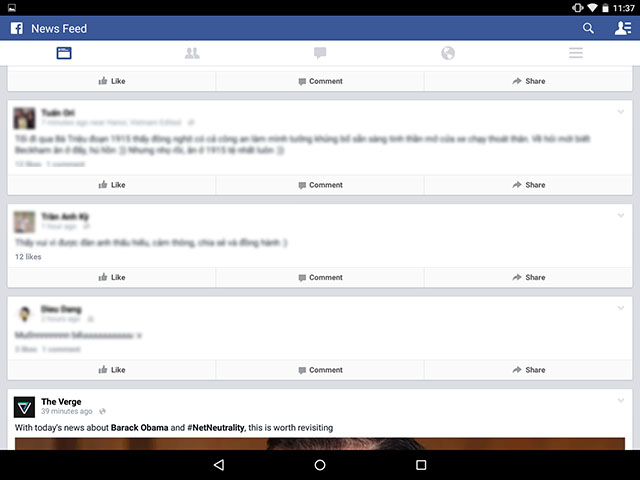 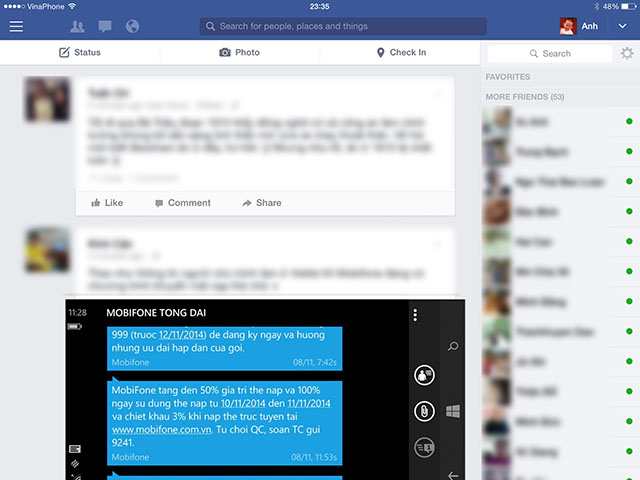 The Facebook application on the iPad (below) takes advantage of the better screen space, while Facebook on Nexus 9 is just an enlarged version of the phone interface. This happens with many other applications on Android 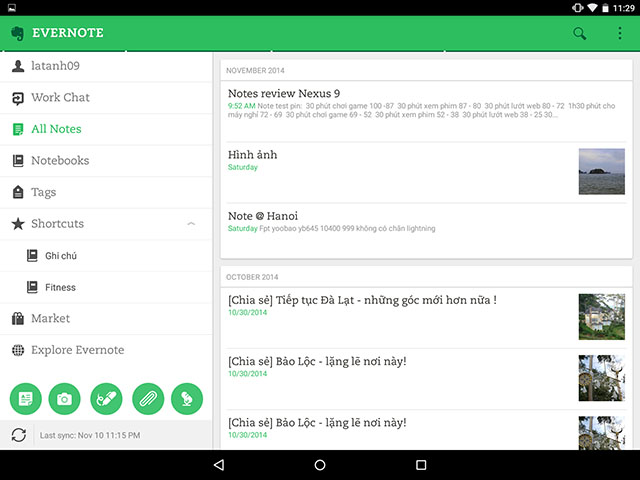 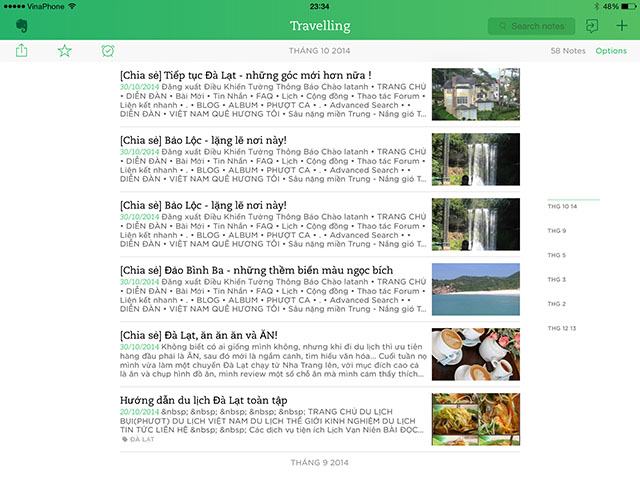 However with Evernote, Android application (above) has a better interface

However, Android applications are designed to be able to zoom on the screen, so for apps developed only for smartphones like Instagram, watching on Nexus 9 is still a bit more comfortable than the zoom interface. of iPad. There are also some apps where the interface on Nexus 9 is more efficient on the iPad, like Evernote. 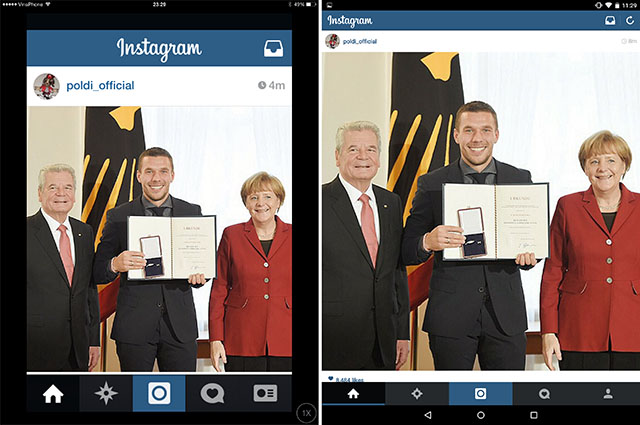 Applications on Android are compatible with more screen types, so do not get black spaces for zooming like Instagram on the iPad (left)

Nexus 9 is equipped with a 6700 mAh battery. During the short experience, we use the machine continuously for gaming, movie and web surfing tasks, every 30 minutes. The device is then turned off within 1 hour and 30 minutes. Screen brightness is set at 70% in all of the above activities.

After 4 hours and 10 minutes of using the above tasks, the Nexus 9 left 10% of the battery. Among them is gaming that consumes the most battery power. However, since this is just a test device, the battery evaluation results may not be accurate compared to commercial machines. We will update the Nexus 9 battery evaluation results with the commercial version in the future.

After 2 years, Google returned to the high-end tablet segment with the Nexus 9. It can be seen that Google wants Nexus 9 to be a direct competitor to the iPad, when the screen and the price of the device are quite close to those of the New iPad released.

Compared to the iPad, Nexus 9 has some advantages like very good external speaker sound, a little cheaper price (for WiFi version). The design of the device is not as luxurious as the iPad with a metal case, but it is also quite solid and easy to use.

However, the Nexus 9, like other Android tablets, hasn't caught up with the iPad in terms of applications. Lollipop brings many improvements to Android, but Google will have to push application developers to create better compatible versions with the big screen. Unless this is done, Android tablets will still be hard to knock out the iPad in the market.