As solid-state drives (SSDs) become increasingly popular and cheap, owning large-capacity SSDs is no longer out of reach. SSD SL500 Limited Summer Edition 640GB of the brand from China Colorful is one of them.

Today, solid-state drives (SSDs) have become an indispensable component in any computer system, whether you are a gamer or an office worker, because of their superior features to the drive. normal hard. Since the supply of memory chips has not been as scarce as before, SSD prices have dropped significantly over the past time, and if you need to buy a large capacity drive, this is no better time.

Colorful – a brand from China – is known in Vietnam market for its SSD products with stable performance and reasonable price. This time, VnReview had a chance on hand and quickly evaluated the SL500 Limited Summer Edition with 640GB capacity. Products are equipped with controller SMI2258XT with 3D NAND TLC 32 technology of Intel, currently priced at about 2 million.

As a cheap product, the SL500 Limited Summer Edition's carrying case is quite simple with white tones, the back has printed basic information about the product as well as Colorful company. The front of the box is cut with a small transparent cell that allows us to see the drive inside. 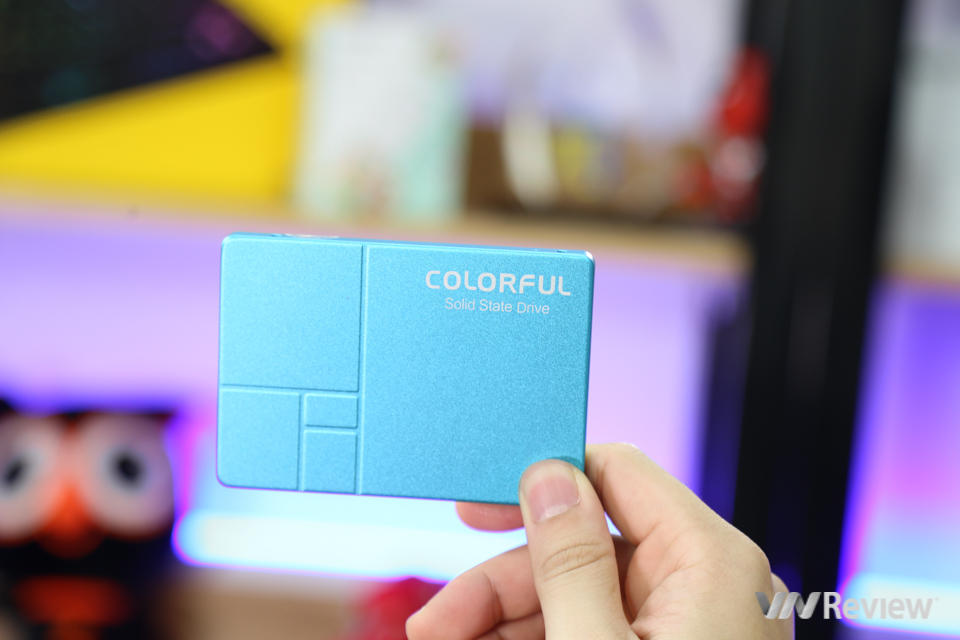 The product is made of aluminum alloy, has a very green color "cool eyes"

The limited edition for summer (previously Colorful also launched the spring SSD kit with pink color), the SL500 Limited Summer Edition has a cool metallic blue color, completely different from the product of Other brands often take black and gray tones. The outer shell of the drive is aluminum alloy that has good thermal conductivity, which makes it more cool than plastic SSDs. The different colors of this version are suitable for male users, or owners of PCs with glass faces and want to show off their unique components. 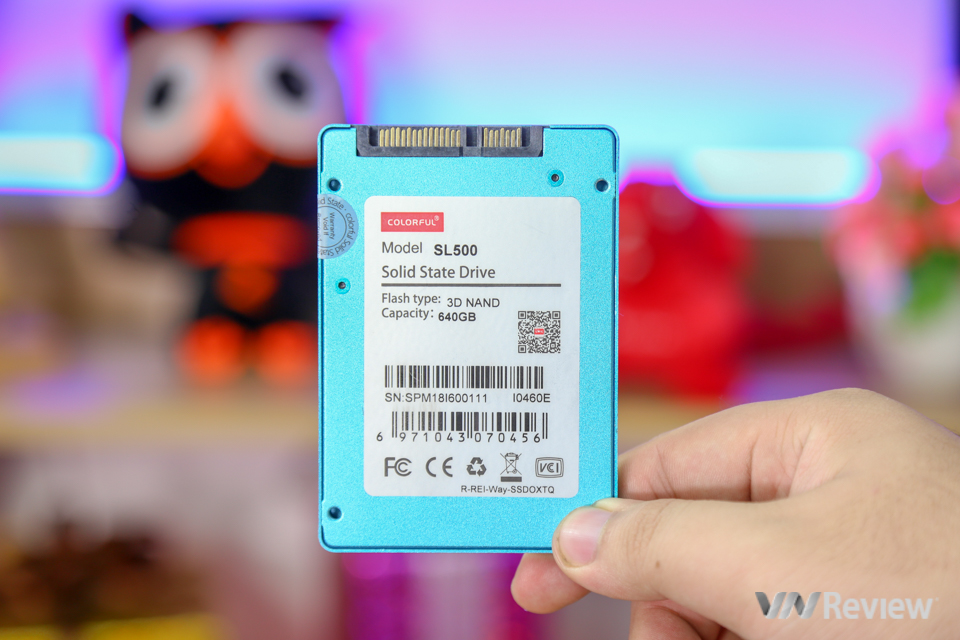 The back of the drive with basic information

A 2.5-inch SATA III drive, the SL500 Limited Summer Edition can be installed on both laptop and desktop computers. The top of the SSD is made quite simply with the non-sophisticated patterns but also makes the design of the product unmatched with other brands. Colorful logos appear neatly in a corner of the surface. 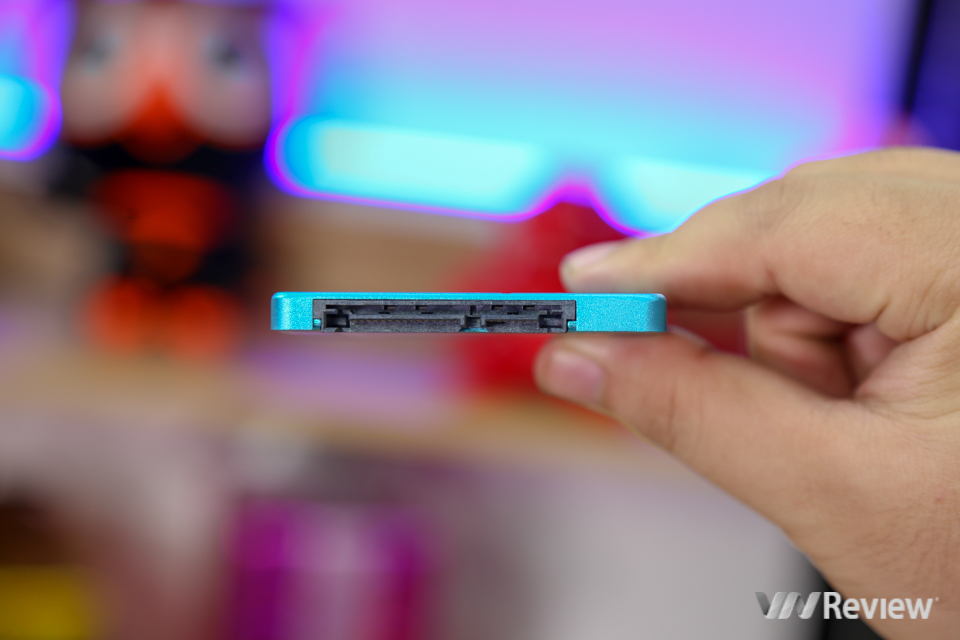 You can mount the drive on both laptop and desktop

Overall, the SL500 Limited Summer Edition still owns a design with good finishing, certainly, does not cause cheap feeling.

However, what users are more interested in a cheap SSD will definitely be performance. Using the popular assessment tools, VnReview found no better way to evaluate an SSD towards the affordable segment with a well-tested … popular system. Test configuration of VnReview as follows:

To evaluate the SSD's overall performance, VnReview uses the simplest tool, the most popular being Crystal Disk Mark. This is also a tool that most vendors display their specifications. 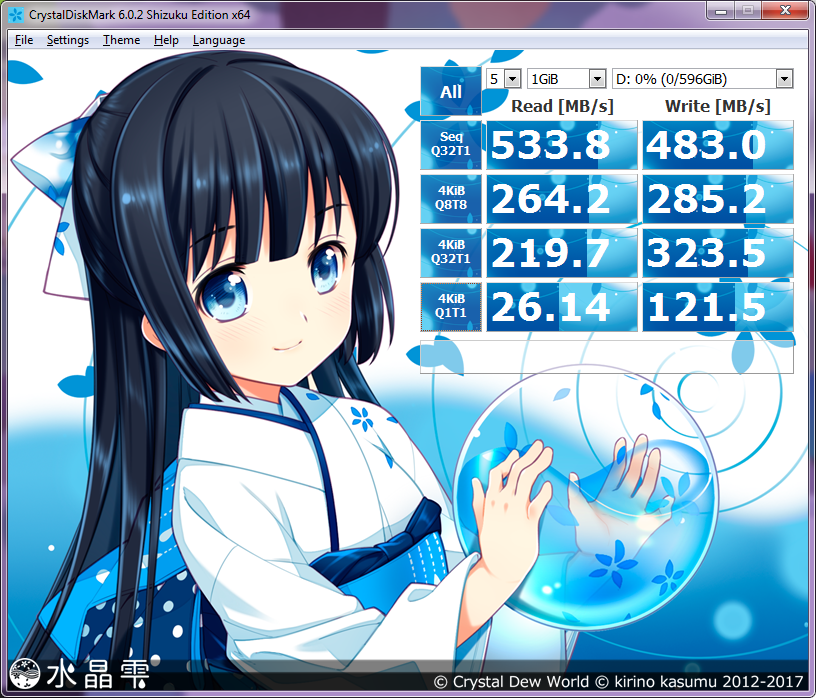 For sequential data (top line results), the speed of the SL500 Limited Summer Edition which VnReview rated is quite good, higher than the announcement of Colorful is 500MB / s (read) and 450MB / s (write ). However, the 4K file reading point is quite low compared to the SSDs on the market, while the 4K file recording point is … unusually high. Basically, this general performance level is acceptable for the price of the SL500 Limited Summer Edition.

Switching to another tool is AS SSD, the speed of the SL500 Limited Summer Edition is slightly reduced compared to Crystal Disk Mark, but this may be a mistake between measurements, and it is within the threshold. fit. 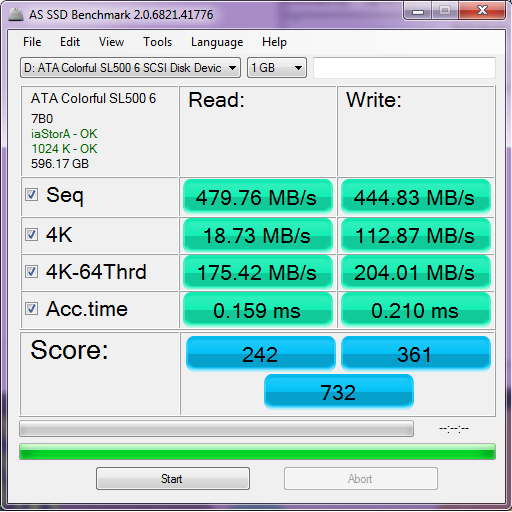 To measure the stability of SSDs, another popular tool is the HD Tune Pro that we choose to test. The write speed of the SL500 Limited Summer Edition has significant differences between low and high ranges but is a systematic fluctuation, so we believe that SSD speed will be stable in most capacity levels. of SSD. 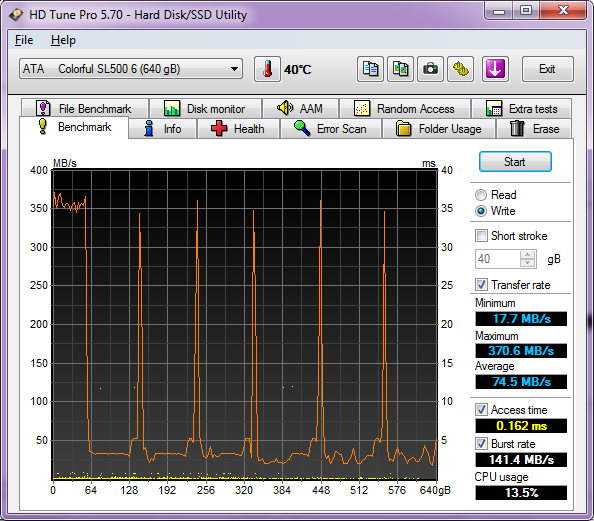 Graphs of SSD read speeds are also quite stable, most of the time ranges from 325-350 MB / s. It can be said that the control chip of SL500 Limited Summer Edition is quite good, but not as impressive as the chip on the cheaper SL300 that VnReview previously evaluated, when the graph is almost a straight line. 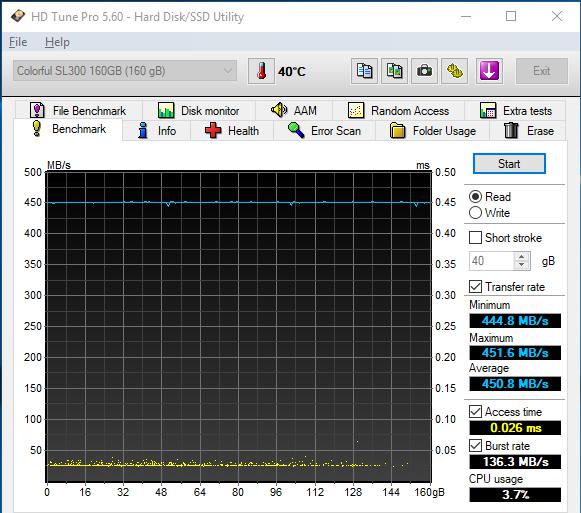 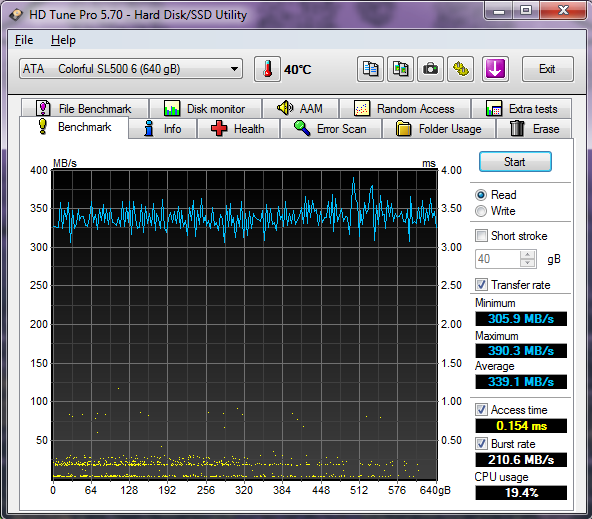 Conducting the test again after a few days of intense use, the data in the device accounts for about 50% of the drive's total capacity, the performance of the SL500 Limited Summer Edition is slightly reduced, but this is understandable and complete. Full acceptable. 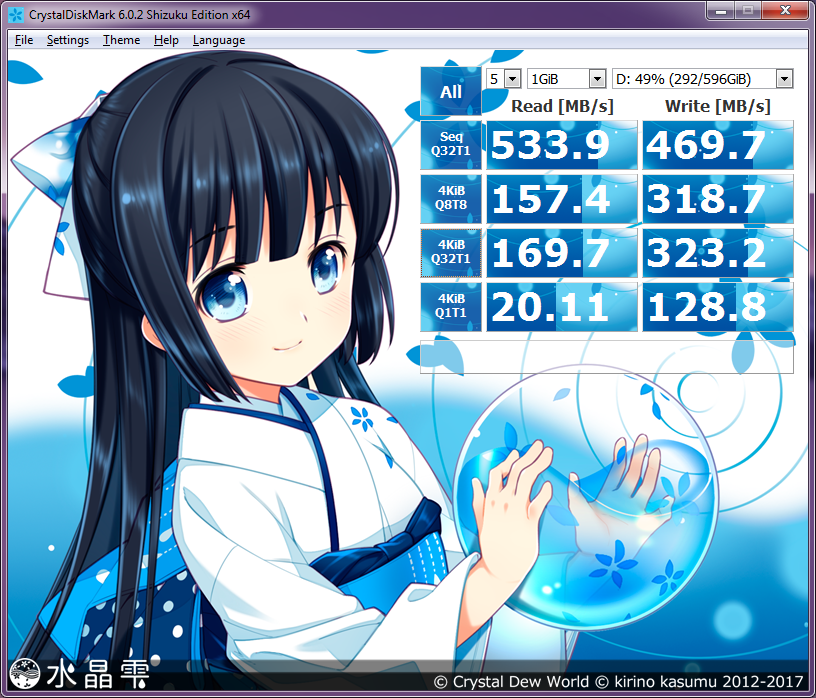 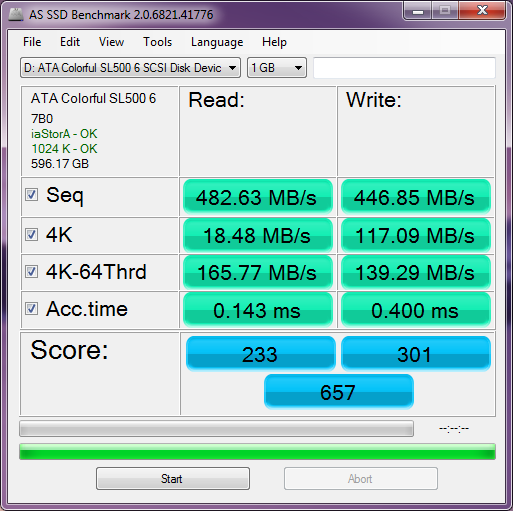 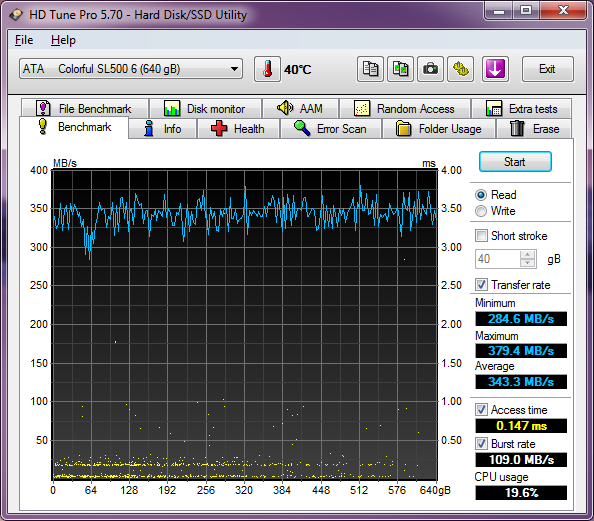 The measured speed in all tools has a certain decline

* HD Tune Pro tool only allows test write speed for drives without partitions, so VnReview cannot measure the write speed of the drive with 50% of data

The price is only 1.7 million for SSD SSD 640GB capacity is very attractive, suitable for users who are used to using SSD but at the same time want large storage capacity as traditional HDD. Drive performance is decent, storage capacity is comfortable for the operating system and even heavy games, important software.

It is not too much to say that the existence of HDDs with capacities from 500GB to 1TB will not be long. Colorful SL500 Limited Summer Edition is a very desirable choice for those looking for a balance between design, price and performance, whether office workers or gamers.

– Control chip is not really impressive

– 4K read speed is slower than other products on the market

'PUBG' officially allows PS4 and Xbox One to play together – VnReview

Post Views: 22 Multi-platform play feature will be available in PlayerUnknown's Battlegrounds from next October. That is the information recently announced by PUBG Corp at the Gamescom conference. Specifically, players of PUBG on two console platforms are PS4 and Xbox One will be paired to play together. According to the Engadget, PUBG will start testing […]

Intuitively improved! How to change the “Computer Name” of the PC

Post Views: 66 [OSEN=강서정 기자] ‘Mulberry School’ ‘Im Young-woong, Young-tak, Lee Chan-won, and Jang Min-ho are wearing full-fledged work clothes,’ and ‘Non-du-Long Fashionist’ is held. In the third episode of ‘TV CHOSUN’, a new program ‘Mulberry School,’ which will be aired on the 27th, during the training of ‘Mr. Bong Pak’ in Nature, ‘Pulsin Beginner’ […]