Balancing harmoniously the price and performance and the large storage capacity, the Colorful SSD SL500 Boost is 1TB is the right choice for users with moderate needs, without "super speed" like M SSDs. .2 NVMe, but also do not want to slow down the computer system because of the slow speed of traditional HDD.

If you ask me, when upgrading a computer, which components should be prioritized first, I will always answer that solid-state drives (SSDs). Although it is a cheap SSD, although only using a somewhat outdated SATA 3 interface, it will also be able to "revive" an old computer. The low-cost segment is also where brands from China like Colorful aim: not too flashy, efficient performance, plenty of capacity options and most importantly, accessible prices.

The main character in VnReview's article today is the Colorful SSD SL500 Boost, which has a capacity of 1TB, currently priced at about VND 3 million.

Colorful SL500 Boost is covered with a gray and white plastic cover with a scratched pattern, at first glance you will mistakenly think that it is made of metal material. In fact, only when I hold the product in my hand, can I realize this. 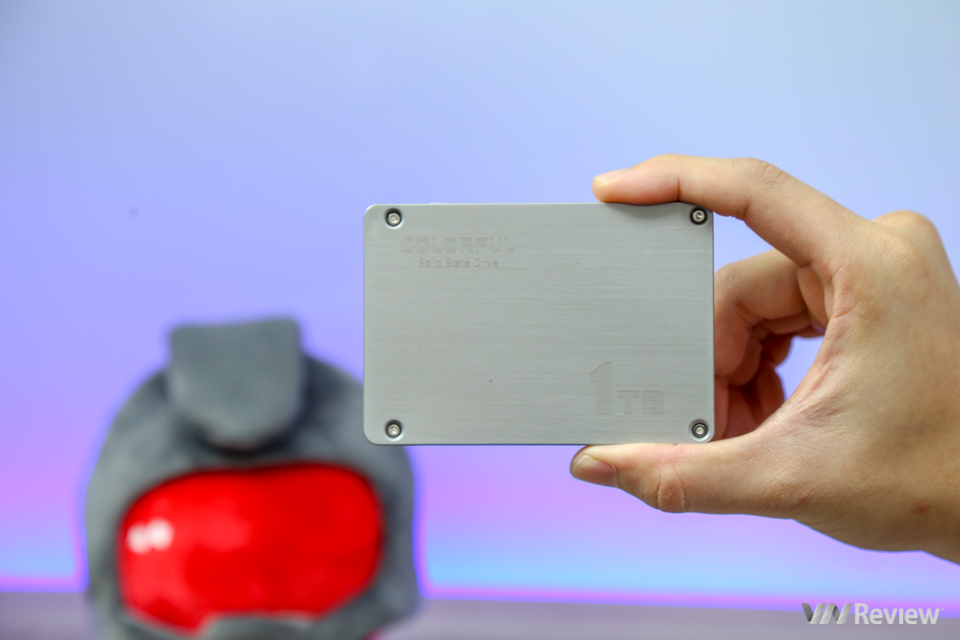 If compared to the limited edition SSDs such as SL500 Summer Edition 640GB that VnReview used to experience, this product has a low margin in helping users "confidently show off their personality", and plastic casing will obviously not bring Feeling high-class like metal. The bright point is that this plastic shell is still well done by Colorful, without the feeling of creaking and uncertainty. 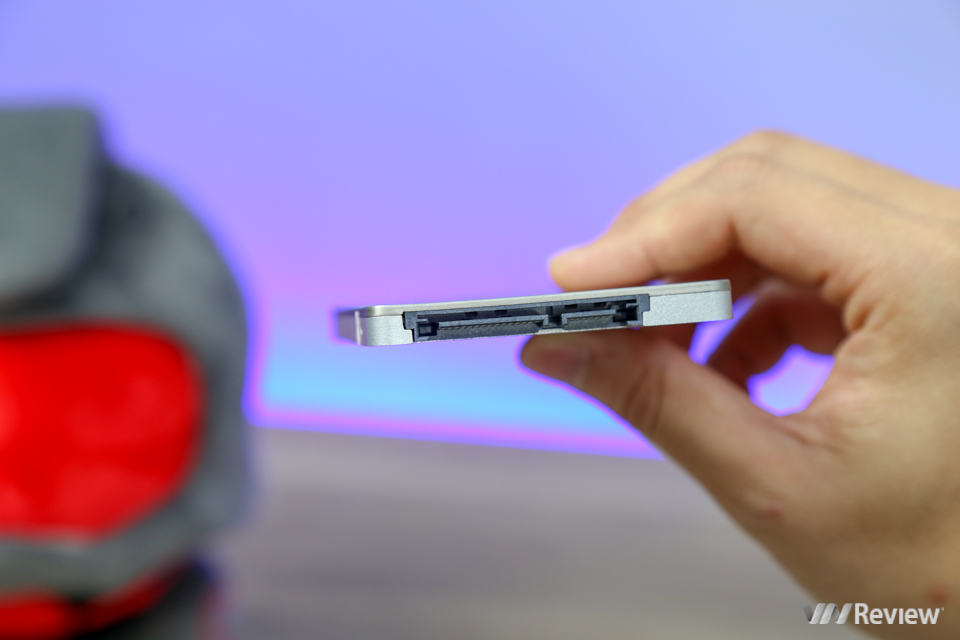 Being a 2.5-inch SSD, the SL500 Boost obviously won't be as compact as the popular M.2 SSDs, but in return it will be integrated into almost every computer system today. Even older systems only have SATA 2 ports because SATA 3 is backward compatible with their older siblings. In addition, larger sizes will also ensure better heat dissipation. 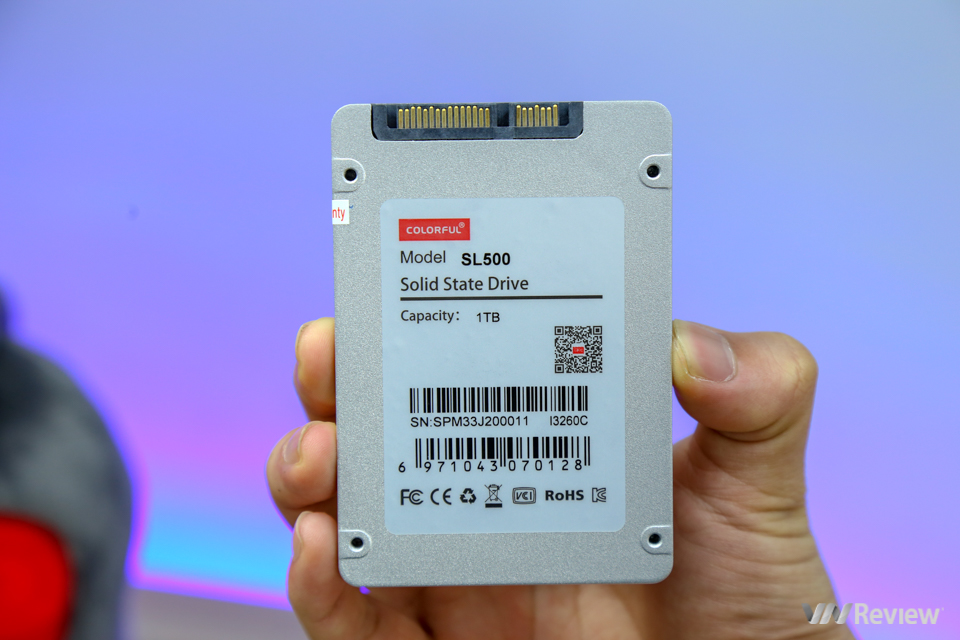 On the other hand, SL500 Boost basically has no design highlights. The top of the Colorful-only drive has an imprinted 1TB capacity, while the underside contains some basic information such as model name, capacity, production symbols, etc. 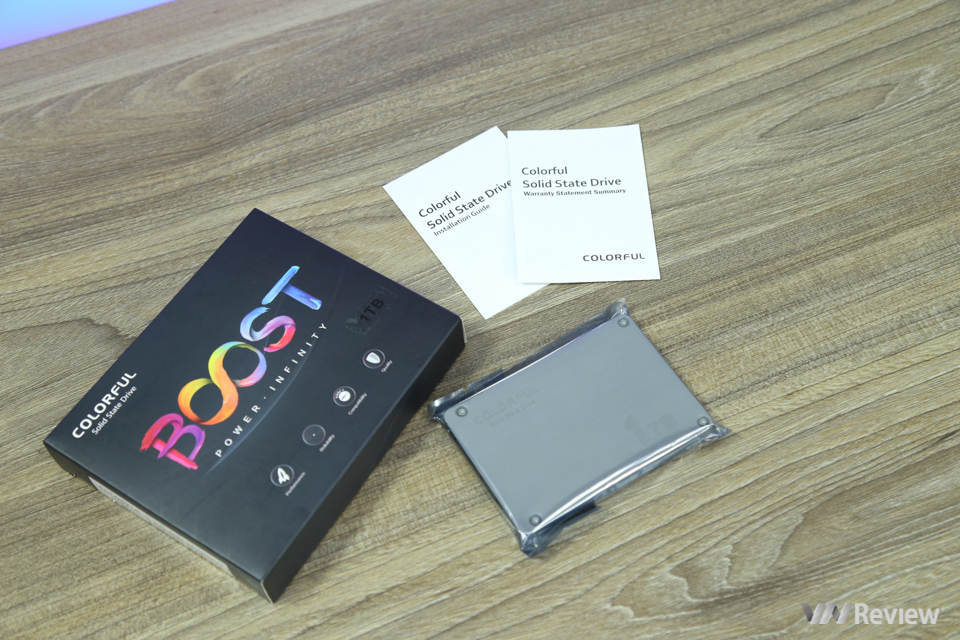 In terms of parameters, SL500 Boost uses 3D NAND MLC (Multi-Level Cell) flash memory, SMI 2246EN controller. According to Colorful's announcement, drives with read and write speeds (sequentially) are 520MB / s and 410MB / s respectively. Normally, for SSDs with large storage capacity, manufacturers will adjust the speed to ensure stability when using the product, so it is not too difficult to understand when the SL500 Boost has a lower write speed than one. bit compared to the general level of SSD using SATA 3 connector.

Despite its high capacity, Colorful's SL500 Boost is still aimed primarily at users with almost no excess but large storage needs. Therefore, VnReview will only test this product on a popular configuration. Test system of VnReview has the following configuration:

To check the specifications of the hard drive in general, Crystal Disk Info is probably the most popular tool. Here, we can see the name, capacity, usage time, connection standard or whether the drive is having problems. 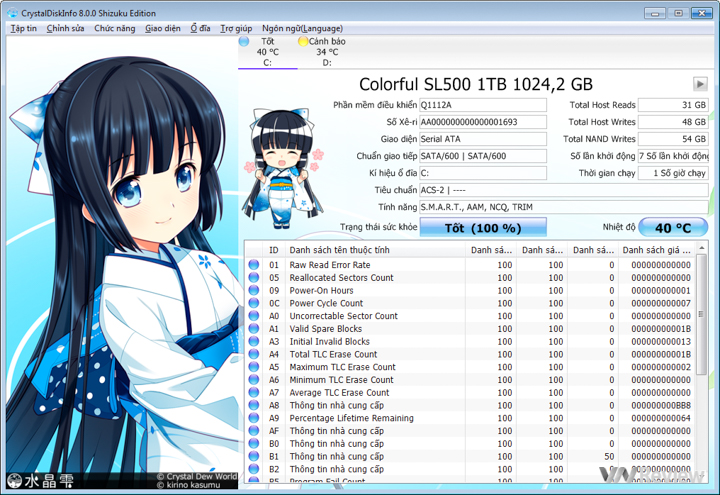 Crystal Disk Mark, "one brother" with Crystal Disk Info is one of the most intuitive and easy-to-use hard drive benchmarking tools available today. This is also the application used by the majority of hard drive firms to announce the read / write speed of their products. 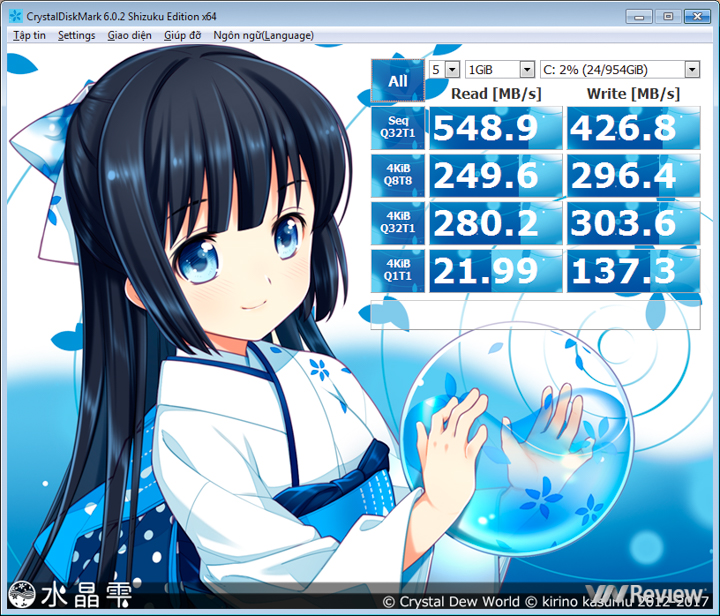 For this tool, ordinary users will need to pay attention to two sequential read speeds (top line, this is also the speed that firms mention in their products) and access speed. 4KiB random export (bottom line). The results showed that SL500 Boost's sequential reading score was 548.9MB / s and 426MB / s, both better than the announcement of Colorful. Meanwhile, random access speeds are still low at read and high speeds at write speeds, which we have seen in the SSD SL500 Limited Summer Edition. 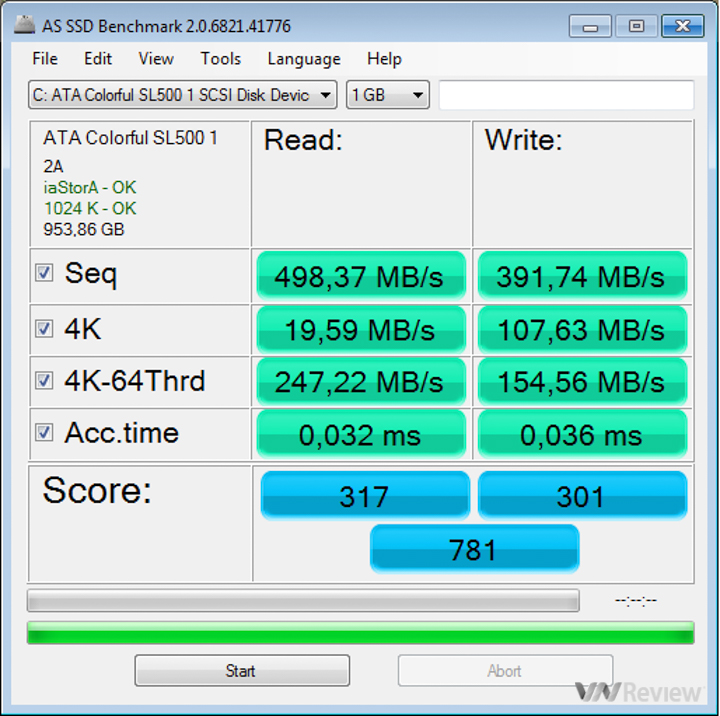 Next is the AS SSD benchmark software, which is supposed to more accurately reflect the speed of the hard drive compared to Crystal Disk Mark due to using uncompressed data instead of compression, so the speed will be lower. The overall score of SL500 Boost is 781. 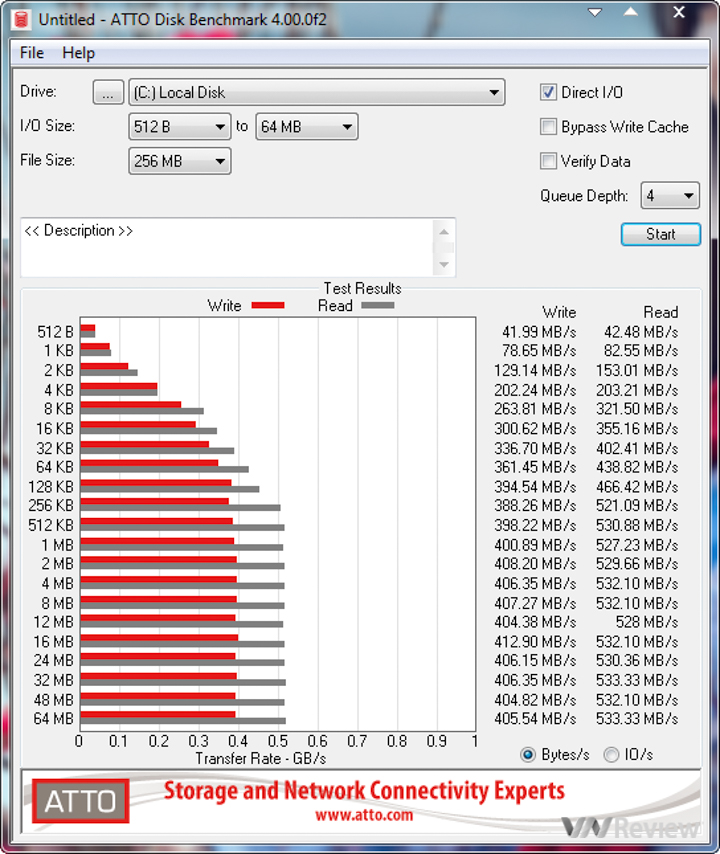 Atto Disk Benchmark, a long-standing but still trusted tool that allows users to monitor the performance of hard drives in many different data size options. In this test, VnReview set up to access 256MB data, with file sizes from 512B to 64MB. SL500 Boost has the lowest speed of about 42MB / s, the highest is 533MB / s for reading and 405MB / s for recording, quite close to the published speed of Colorful.

Conducting the test again after a few days of intense use, in-machine data accounts for about 50% of the drive's total capacity, the SL500 Boost's performance is slightly reduced, which is understandable for solid-state hard drives. 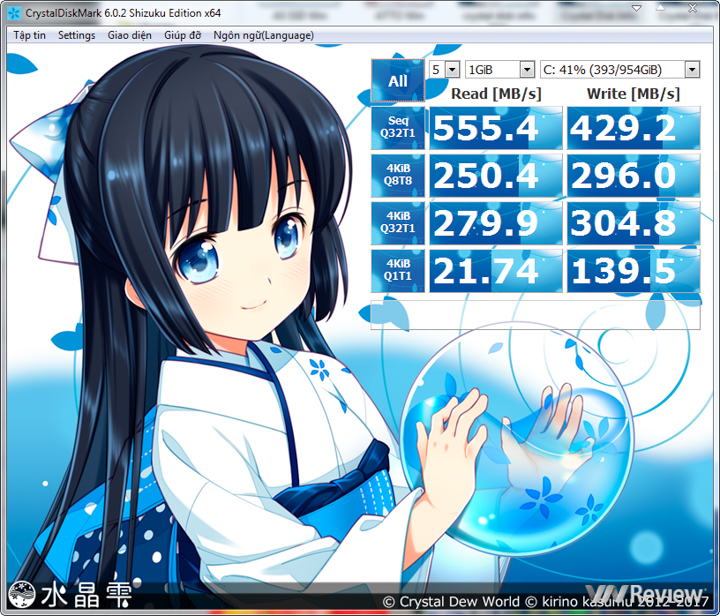 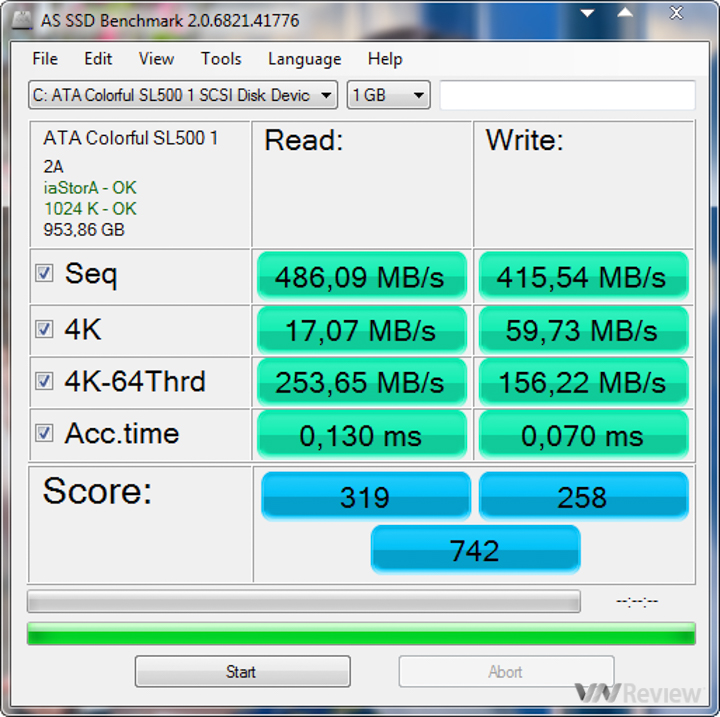 AS SSD points slightly decreased to 742 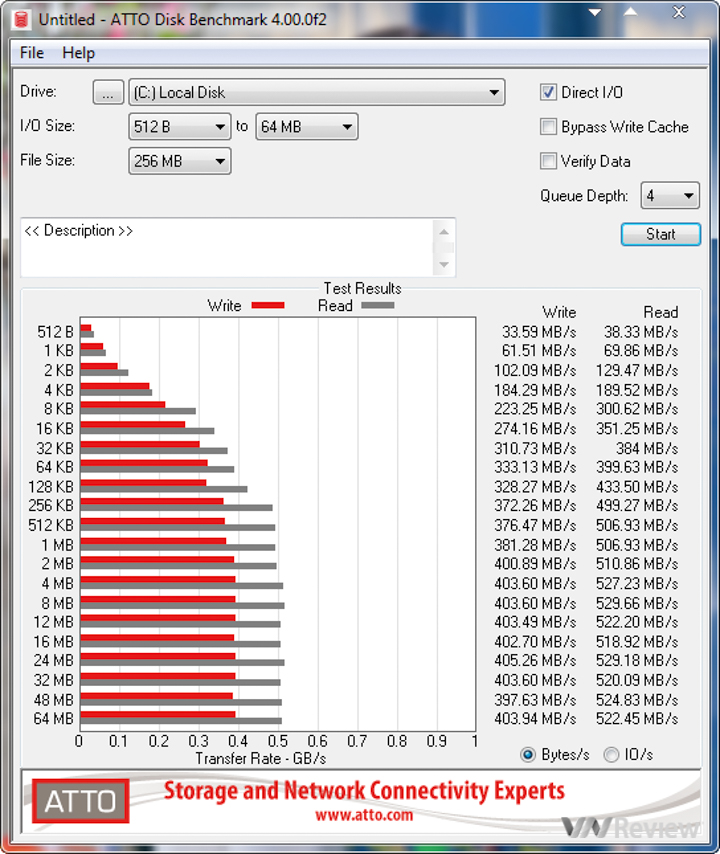 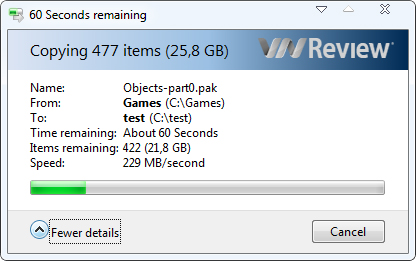 Practical experience, when copying a large amount of data with all kinds of files, from movies, photos, games to system files, the speed of the drive remains at the threshold of 230MB / s. SL500 Boost's Windows boot speed is also quite fast, about 10 seconds (the writer's system uses Windows 7).

It can be said, the price of about 3 million VND for an SSD with 1TB capacity as SL500 Boost is worth considering. Although without a flashy design, Colorful did a good job of balancing the price and performance of the SL500 Boost, making it a complete product within the reach of most users. If you are looking for an alternative to traditional HDD, this is a better time.

– 4K read speed is slower than other products on the market

Post Views: 82 Whether you’re new to the Q’ or you’re a seasoned griller, there’s always something new to learn about barbequing. And even if you’ve got a ribs recipe down pat, you can always branch out and try new things, from grilling seafood to learning how to get good flavor from beefless burgers. The […]

At home, you also have to study online, invest to buy any good online learning laptop, you can still use it to go to school later?

Post Views: 228 At home, you also have to study online, invest to buy any good online learning laptop, you can still use it to go to school later? Thanh Nam 7 hours ago Artwork image As you all know, the government of our country has decided to isolate society so we can stop the […]

Post Views: 77 Boost Mobile, owned by Dish Wireless, announced today five prepaid plans each priced under $50 per month. One of the five new plans is part of Boost’s “$hrink-It!” offering that reduces a customer’s monthly rate by $10 per month after six on-time payments are made. The plan starts at $45 a month […]