In recent years, the trend of using mirrorless cameras (mirrorless) has increased dramatically, but the leading DSLR manufacturer, Canon is not very interested in that trend.

The first mirrorless Canon introduced was the EOS M in 2012, with a minimal design, limited adjustment ability and a high initial price, so it was unattractive. Successive cameras, M2 and M3, go more professionally, but perhaps Canon still wants to introduce more minimalist mirrorless models in design and user interface. That's why it introduced the EOS M10 at the end of 2015, the latest in Canon's mirrorless camera line.

Canon EOS M10 is available in Vietnam market since the beginning of 2016. It is sold with Canon EF-M lens 15-45mm F3.5-6.3 STM, the list price of this duo is 10.5 million, is low and equivalent to the new price of basic DSLR or mirrorless kits. In this article we will evaluate the aforementioned duo. 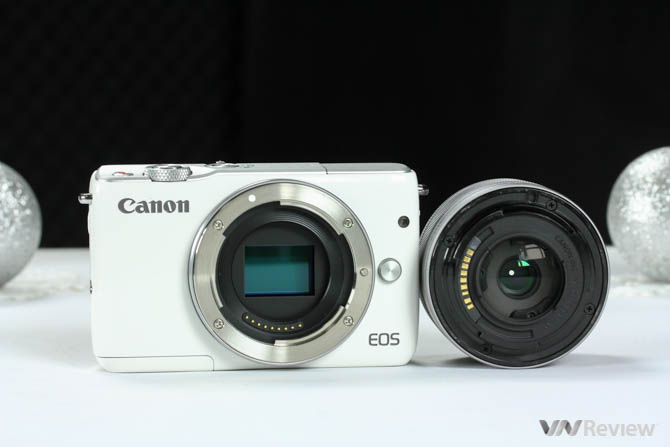 The M10 body is just as compact as a compact

Excluding the removable lens, the M10 body is just as compact as a compact. The device has a choice of black or white, the white one looks quite cute so it is suitable for female users. When installing a 15 – 45 mm lens, the device is still compact and can be put into a bag. In addition, Canon also provides colorful wall coverings to customize the look for the machine (sold separately).

Even when the lens is attached, the device is still compact and can be put in a bag 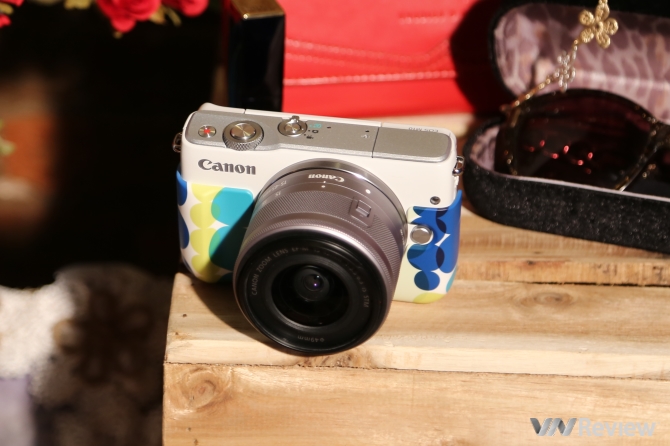 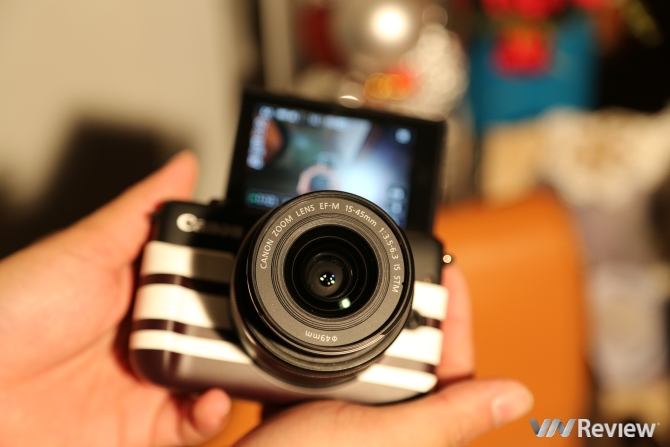 … and the black version when installed with a cover

However, the design is too compact, making it difficult to handle and adjust parameters on the M10. The right part on the front is flat, without protruding grip, making it hard to hold. The device also has only one rotation on the shutter button, 5 buttons on the back, so adjusting the parameters, the shooting mode largely depends on the 3-inch touch screen to slow down the operation a lot if not familiar; Sometimes you have to press several times to make the desired adjustments. 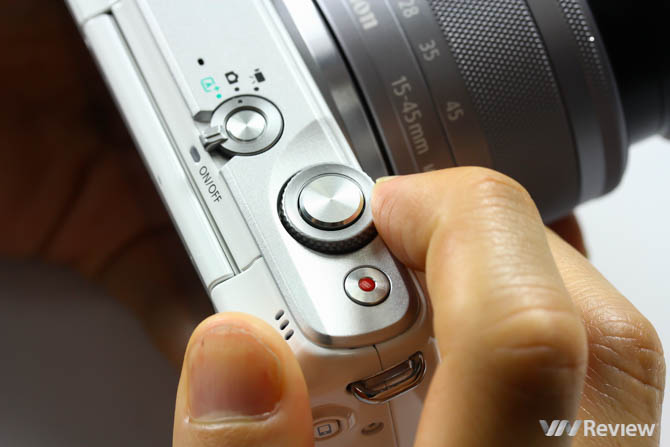 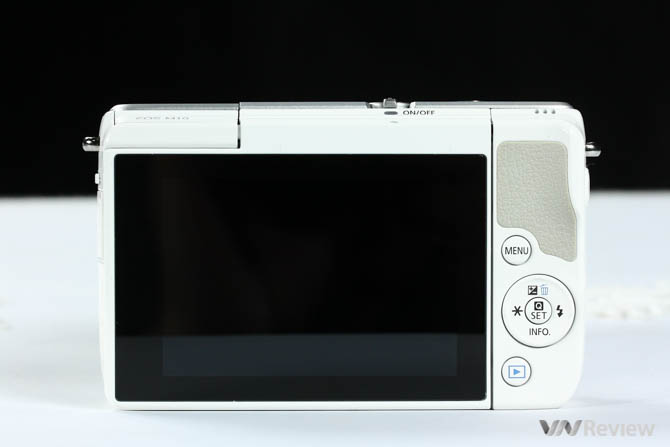 The machine only has a rotation on the shutter button, with a few buttons on the back, so the adjustment is not flexible

For square dimensions, the M10 is also cut off from the viewfinder, so viewing and viewing images is done via the screen. The screen of the machine has good visibility, can be used when looking under the sun and turning 180 degrees so convenient shooting "selfie". 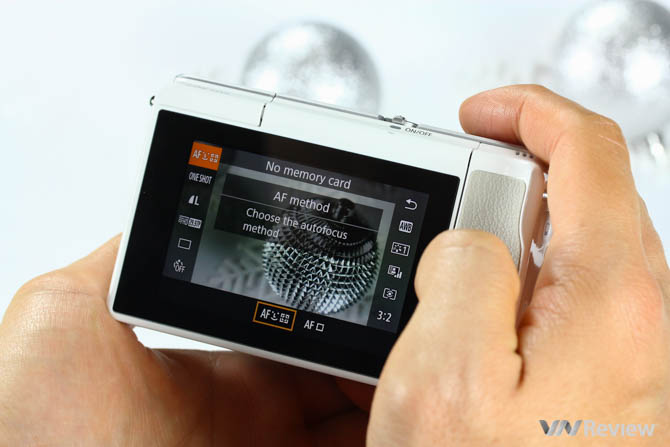 Most options, editing will be done on the touch screen 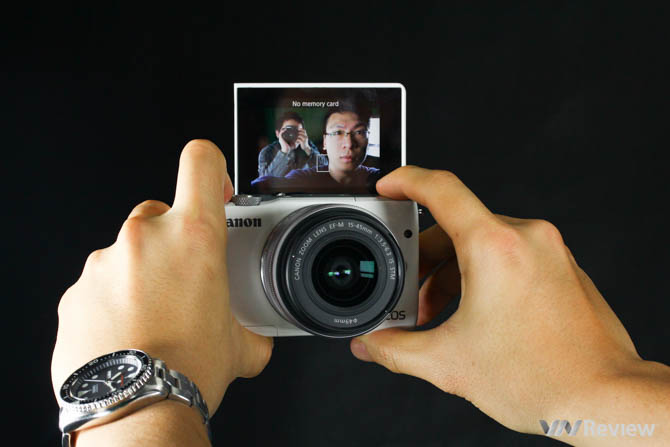 The screen of the M10 is well displayed, capable of turning 180 degrees to support shooting "selfie".

At the top of the camera, you will see the switch button between 3 modes: taking photos automatically, taking pictures and recording movies. It does not have removable flash pins, but has built-in flash for necessary situations. The movie button and WiFi function are separate for users to press, indicating that Canon emphasizes these two features. 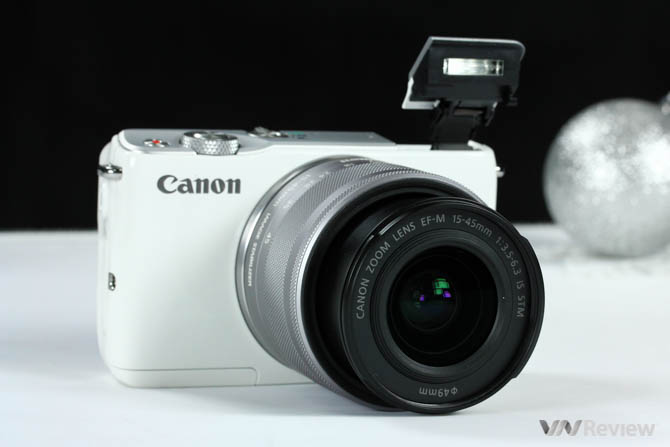 It has built-in flash but no removable flash plug 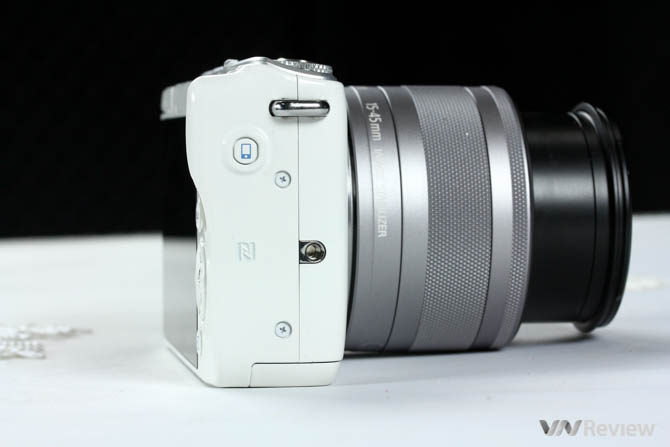 Overall the design of the M10 emphasizes minimalism, compactness and cute styling. In exchange for compactness, the M10 must sacrifice many buttons, revolutions and dependence on the touch screen, so it will lose points for those who want to design a party camera for adjustment. 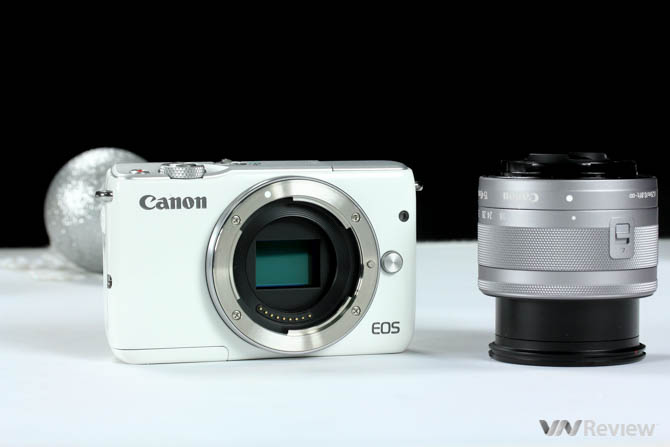 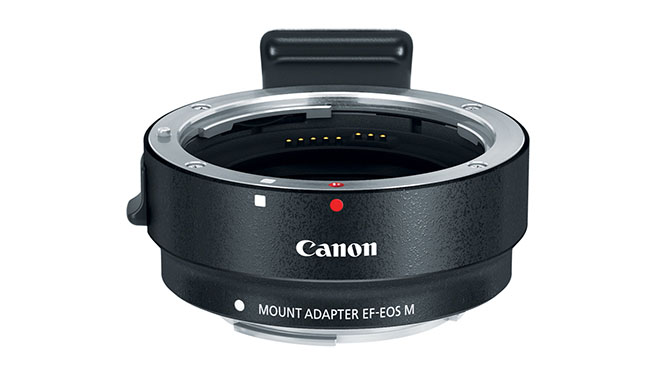 EOS M10 uses Canon EF-M lens mount. Currently Canon has only released 5 EF-M mount lenses, of which only one fixture is 22mm focal length. However, this is not necessarily a disadvantage for people using Canon's DSLR system. You can buy the EF / EF-M mount adapter for about 1.5 million VND to take advantage of existing tubes for EF and EF-S mounts. Because they are all Canon systems, the plug-in tubes still support features such as focus or IS as usual, which is superior to the switch used on other systems. 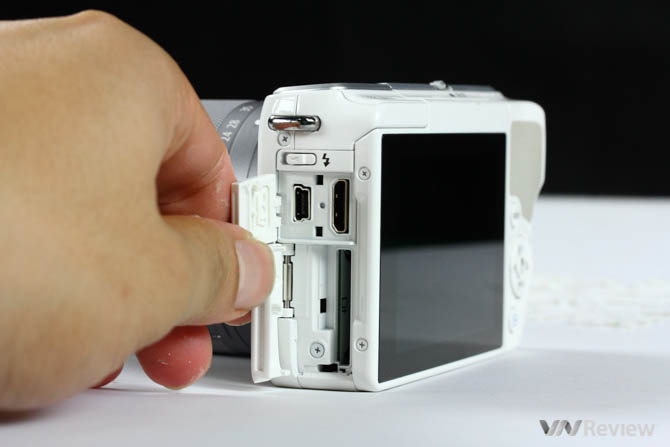 It has Mini-HDMI output port and Mini USB connection port

The device is equipped with Mini USB port like DSLRs and not MicroUSB like on G5X. The USB port on the M10 is only used to connect the computer and not the charging feature, so you cannot use a backup charger to add the battery if needed.

The M10 has both universal connections such as NFC and WiFi, allowing users to connect their smartphones to the camera very quickly to control shooting and taking photos from the card, with the connection button placed on the side of the phone very fast. Canon Image Gateway service helps to connect cameras with large photo and social storage services like Flickr, Facebook …

Evaluate the quality of photography

Lens 15 – 45 mm F3.5-5.6 IS STM attached on M10 with focal length equivalent to 24 – 72mm on Full frame. This focal length is suitable for shooting with a variety of genres from street, indoor, portrait or landscape even though the ability to "remove fonts" will be limited due to the small aperture. This lens also shows some weaknesses when shooting, especially in focusing ability. 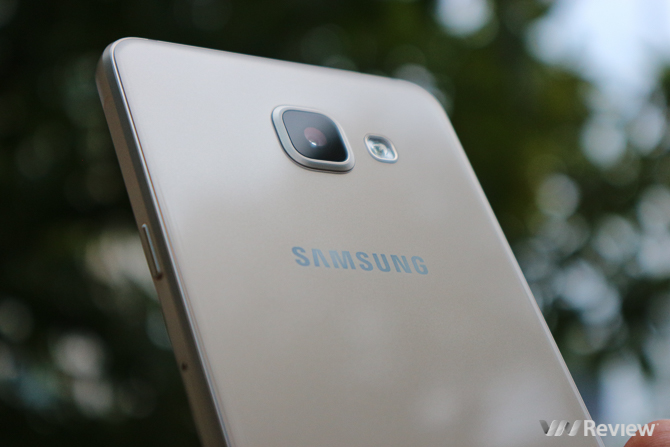 The definition of the lens is not high

Canon adopts the Hybrid CMOS AF II focusing system on M10, with 49 focus points providing very fast focusing speed and equivalent to the EOS M2 or EOS 100D. However, the image does not achieve "sharp" focus despite focusing in the center, and trying both manual focus mode (with support from the Peak Focusing feature – auto focus on each area in the image) and autofocus. The ability to touch the touch screen to select the focus point also makes it easier to focus on those who are unfamiliar. 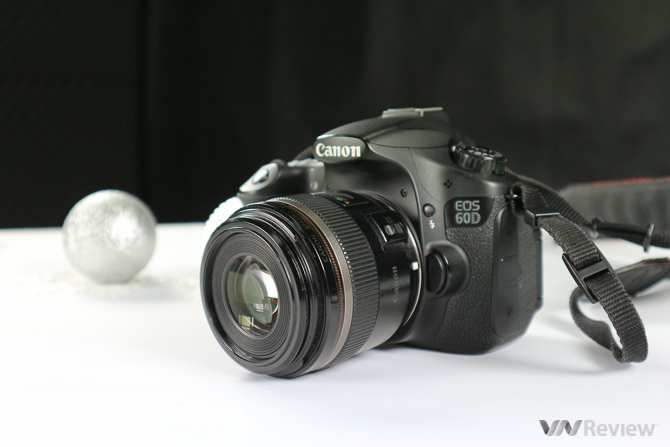 The phenomenon of green border in contrasting areas is quite clear

The lens also has another problem: the blue / purple border. This phenomenon can be seen clearly in the border of objects with strong contrast with the background, as in the image above. 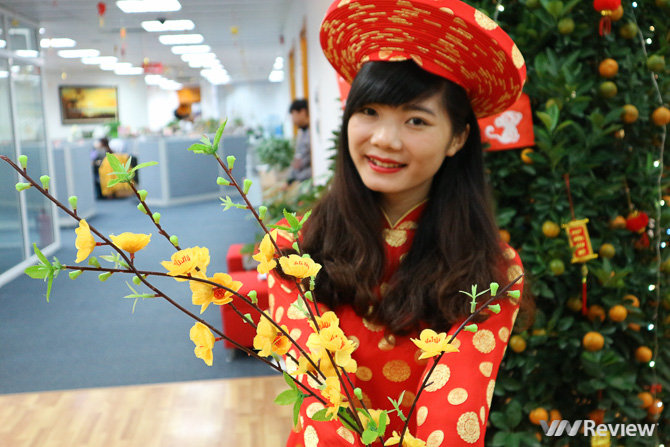 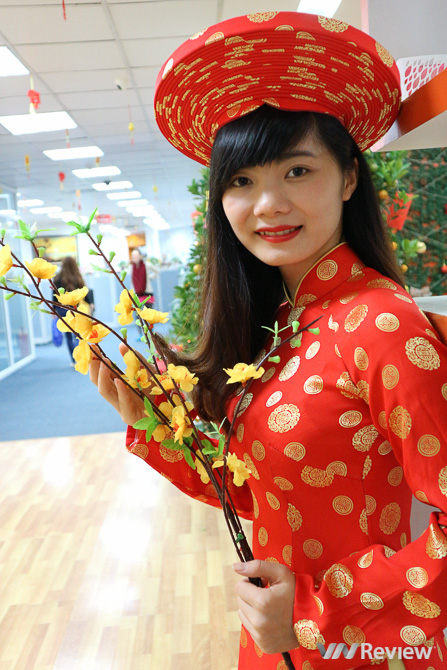 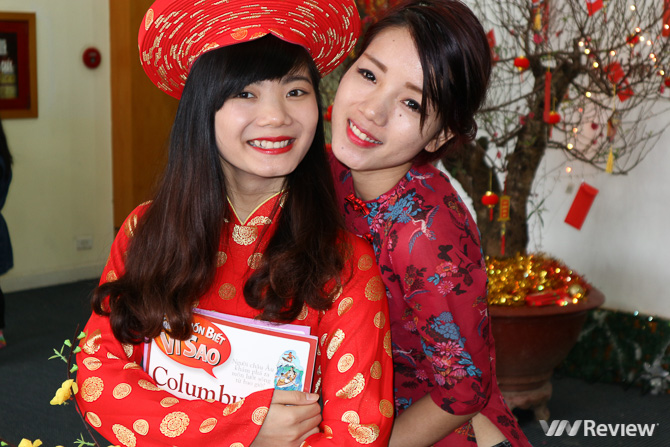 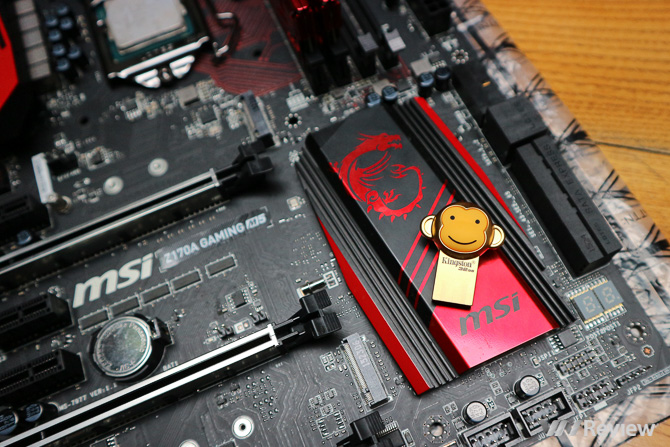 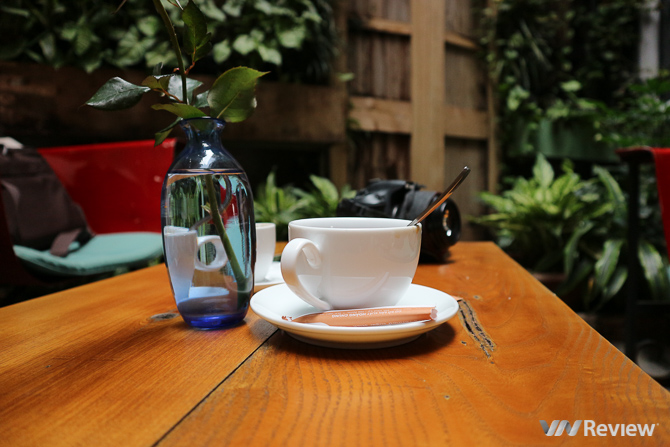 Photo taken during the day, sunny and sunny

For those who are not very good at shooting, the full auto shooting mode of M10 is enough for scenes that are not too complicated. A good light meter, automatically sets the shutter speed and ISO appropriately, so when shooting in the evening, the image is less vibration. Auto white balance mode also works well, giving the standard color. 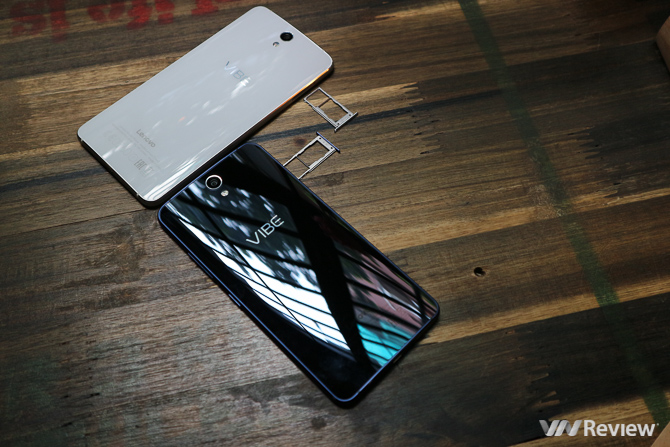 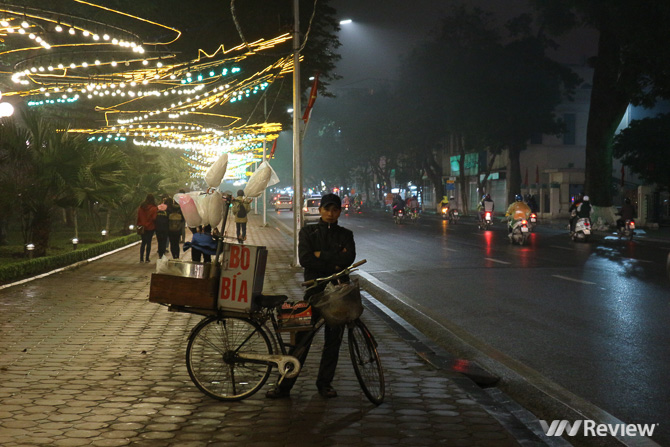 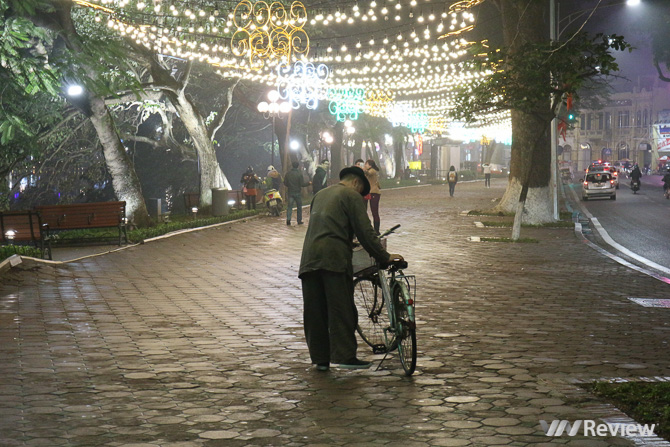 Evening photos, light from street lights. At ISO from 2500 – 3200, noise may be noticed when zoomed in 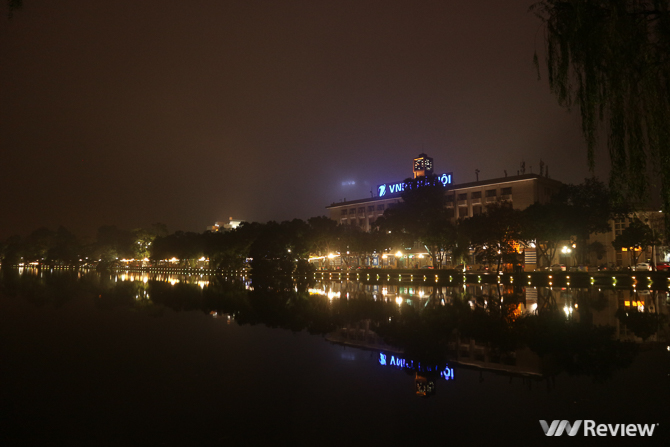 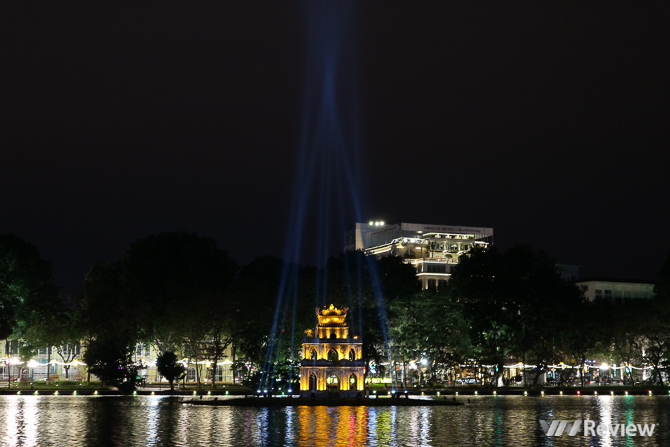 M10 also has good noise reduction at high ISO levels. At ISO levels below 400, images are very clear and highly detailed. The noise starts to appear at ISO 800, but not much and is only apparent when zooming, illuminating images at maximum size. 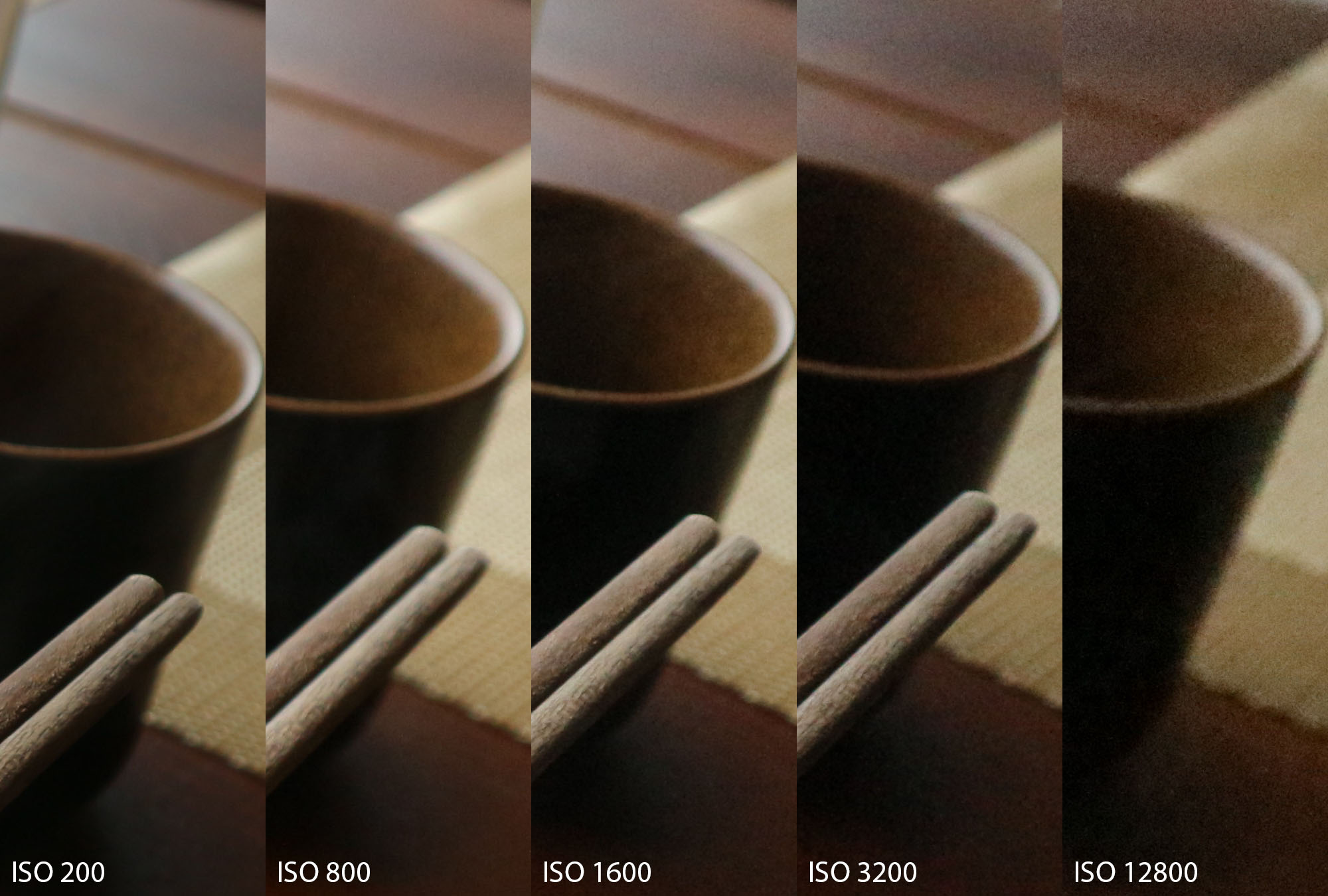 Photos taken from M10 at different ISO levels. Click on the image to view it in a larger size

At ISO 1600 noise is still well controlled, accompanied by a steady light band. Noise starts to appear at ISO 6400. It supports a maximum ISO level of 12800, but it is probably only necessary if you have to capture images in very poor lighting conditions.

Besides automatic mode, M10 also equipped with creative shooting modes, in which Creative Assist mode will create 6 pre-edited photos next to the original image. You can also apply modes such as HDR, black-and-white shooting or food capture mode for better performance. 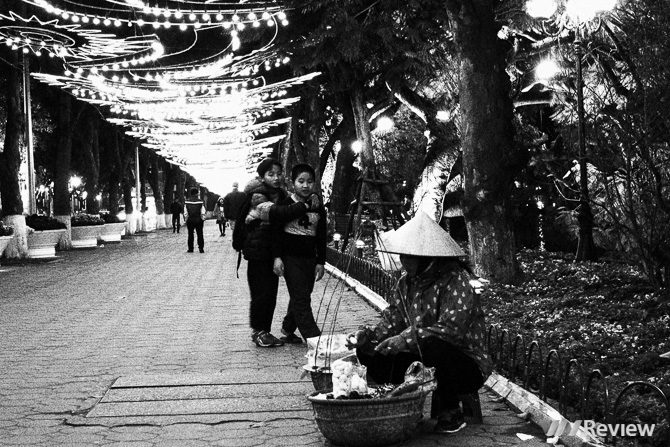 When the option to save JPEG files, the EOS M10 has a fast image storage speed. If you choose to save the RAW image, the speed of saving photos is still acceptable, better than the G5 X that we have rated.

With each full charge, the M10's battery can capture about 300 photos. This is an average number, unfortunately Canon does not support charging via USB port on the computer as with the G5 X so that users can take advantage of the backup batteries are very popular today.

M10 allows you to adjust details when shooting movies, conveniently thanks to the ability to touch focus. However, the resolution limit (only 25fps at Full HD resolution) limits the camcorder's ability to record movies.

Despite being a mirrorless, Canon EOS M10 brings design features and features closer to compact cameras. Heavy touch operation, little control buttons, inflexibility when adjusting deep settings, simple and quality auto mode … are things that familiar camera-and-shoot users or smartphones . With a large sensor, the quality of this machine is still good, the most impressive point is the ability to eliminate noise.

Compared to many mirrorless brands such as Sony's strong technology, Fujifilm has an elegant design and an interesting image, or M4 / 3 specialized brands like Olympus, Panasonic, the difference of M10 is " Eco "Canon. When using the mount adapter, you will take advantage of many quality EF and EF-S mount lenses from Canon and "for" lenses, with more features than those on other systems. . However, in the EF-M lens range, the selection is very limited, there is only one fix tube right.

With a market price of just over 9 million for the M10 kit and 15 – 45mm lens, this product can be the first step to "engage" with Canon fans' camera industry, or as a mirrorless set. Support for users who own DSLR and professional Canon tube kit.