Puppies are rescued from Baghdadi's lair

A lost puppy was rescued after Abu Bakr al-Baghdadi's home was raided and destroyed by a US special operation.

The puppy lay next to the dead mother dog on the side of the road, covered in dust. At first, he was attached to the mother dog could not afford to leave but ended up going to Alhor.

Alhor then took the dog to a safer place, letting him get acquainted with the other dogs. He also contacted a veterinarian for a checkup and a vaccination for it.

"After all, we will live a happy life," Alhor wrote on Twitter and posted photos of the dog that had been bathed clean, saying it was named BoBe. "In a few days, he will have a house. BoBe is having fun."

US Delta task force on October 26 flew from Iraq to Syria to attack Baghdadi's hideout in Barisha village. Chased to death, he detonated a suicide belt in the bunker with two children. In addition to the IS leader and two children, four women and a man were also killed at the compound. After destroying Baghdadi, US forces attacked, flattened the building before leaving.

Conan, a professional dog of the Malinois, Belgian breed of the US special mission, also took part in the raid and was injured. President Donald Trump praised Conan as "The Hero of America" ​​and posted on Facebook a picture of him giving him a medal. 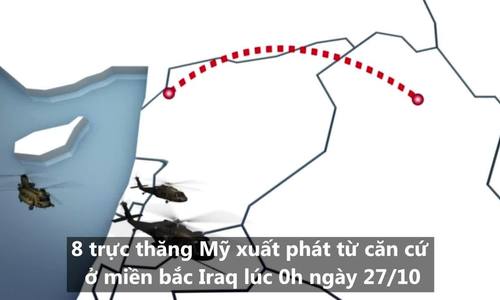 The lair of the IS leader

The lair of the IS leader. Video: Next Media