Primavera: Continuing the history of the famous Vespa

Owning a sophisticated, youthful and attractive design and powerful performance, Primavera deserves to be the car that continues the reputation of the famous Vespa line.

1968 marked an important milestone in the world motorcycle industry when the first Vespa Primavera was born and became one of the symbols of the new generation. 45 years later, carrying the mission to replace the LX series, Primavera was revived with a fashionable appearance and inherited the subtle lines of the “super scooter” 946.

This is the most impressive factor for Cafeauto correspondent group and fans of Italian style. Because an Italian car is always placed on top of design issues and consumers can boldly spend their money to buy an expensive car with a beautiful design and do not care about the disadvantages of the car. this.

At first sight, Primavera has impressed with attractive design, youthful and sophisticated. Primavera’s design is an intersection between the classic features of 70 years of Vespa history and the youthfulness and modernity inherited from the world’s most expensive scooter 946. The unreasonable details on LX have also been engineers Piaggio turns to Primavera to become more perfect. 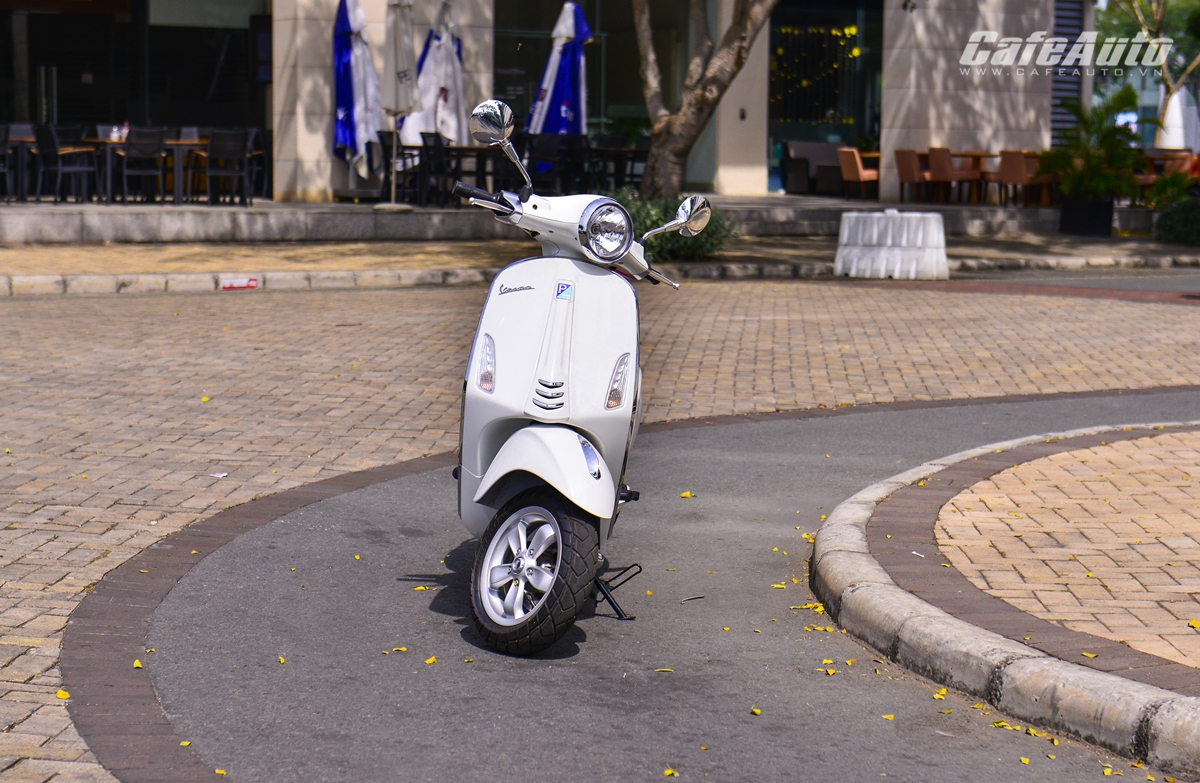 Viewed from the front, the most noticeable difference in Primavera compared to LX is the 946 style mask, Led-shaped turn signals and Chrome lines running along the car’s underbody to help the car become youthful. and more eye-catching. 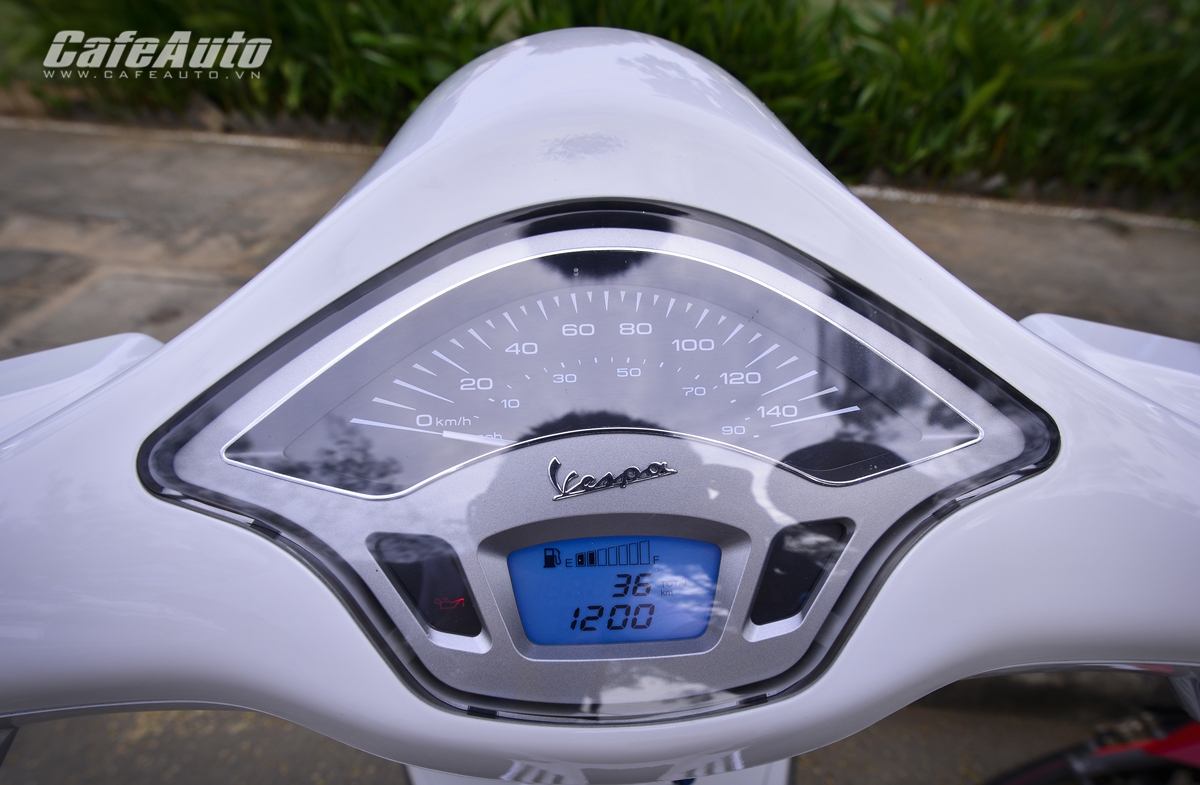 The clock cluster on Primavera has also been redesigned with a harmonious combination of classic and modern features when the LCD display parameters but the speedometer is still the traditional form. Rearview mirror has been designed smaller and more harmonious than the body. 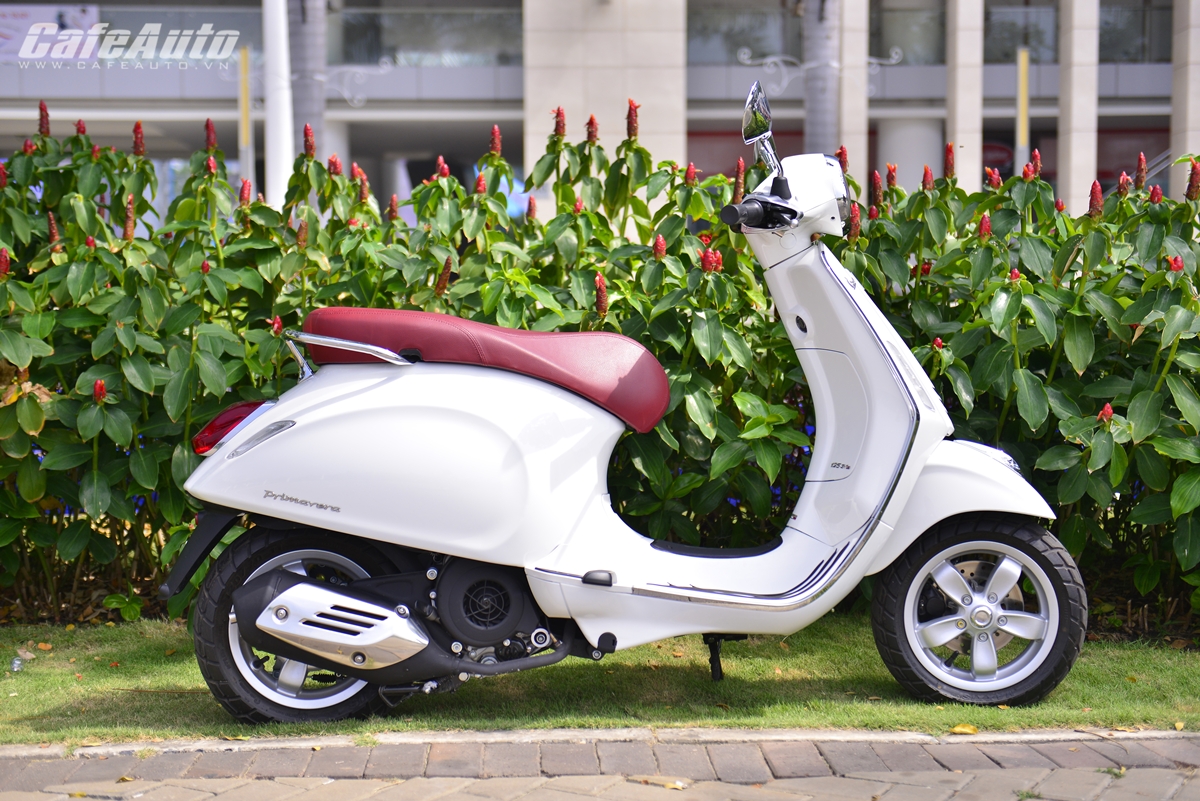 The Primavera body has been designed to create a slimmer feel with the tail being gently tapered towards the rear to create a sense of elegance and a modern style instead of the plump appearance on the Vespa LX. Tail lights and turn signals are designed in harmony with the overall vehicle. However, there is a bit of regret when the Primavera’s taillights in Vietnam do not use Led technology like Primavera in Italy but use traditional diodes. 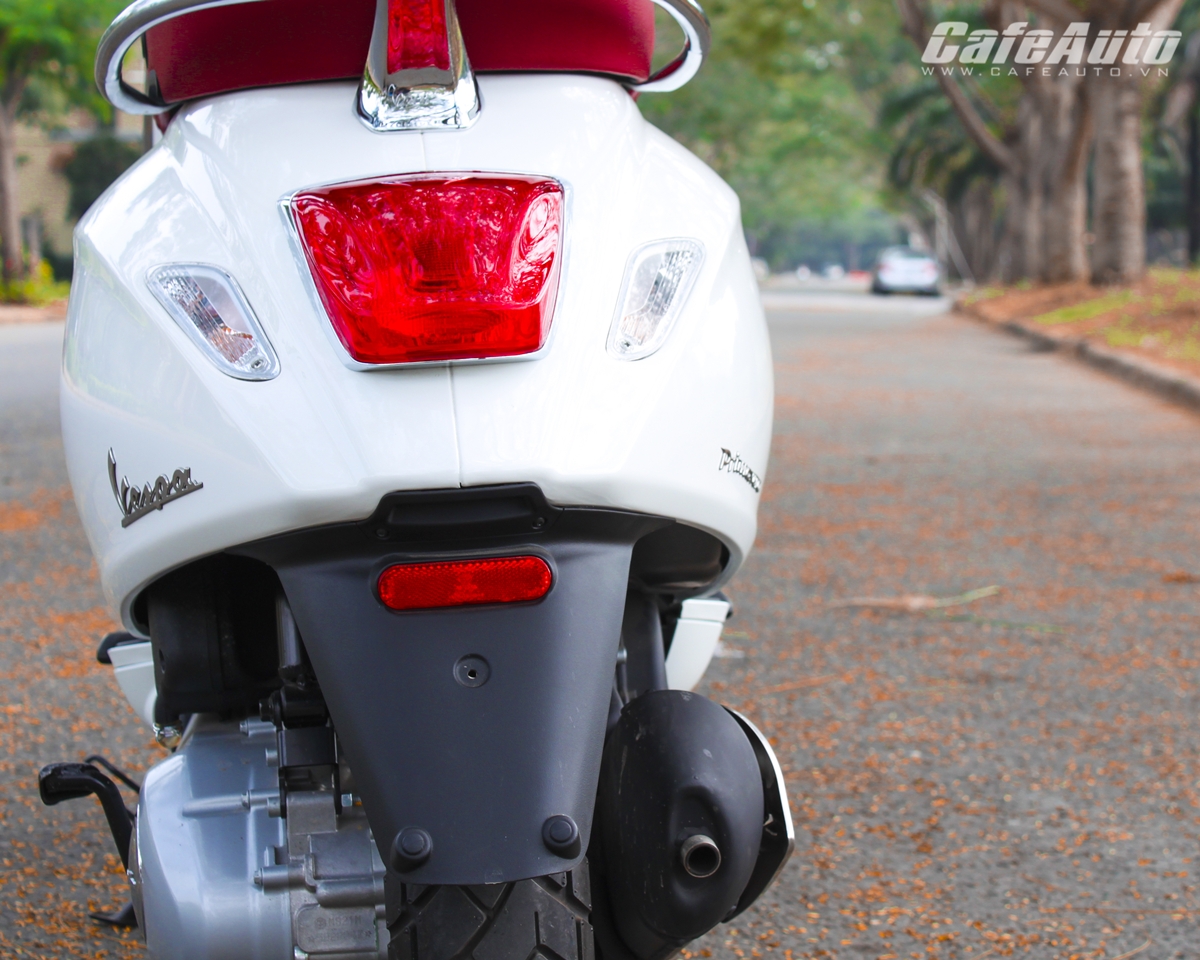 The saddle is elaborated and beautifully designed by Piaggio with a slightly protruding head but pointed and widened backwards to give users a more comfortable posture and footrest. Unfortunately, Primavera remains loyal to the way of opening the trunk with the key in the saddle instead of the button like on the GTS.

The utility of Primavera is also highly appreciated when the car is equipped with front and rear trunk storage with a capacity of 16.6 liters. Overall, the Primavera is a beautifully designed vehicle with a meticulously polished design often seen by Italian models.

Would a well-designed car be “good at paint” and “good wood”? This is a big question mark that Cafeauto wants to clarify. 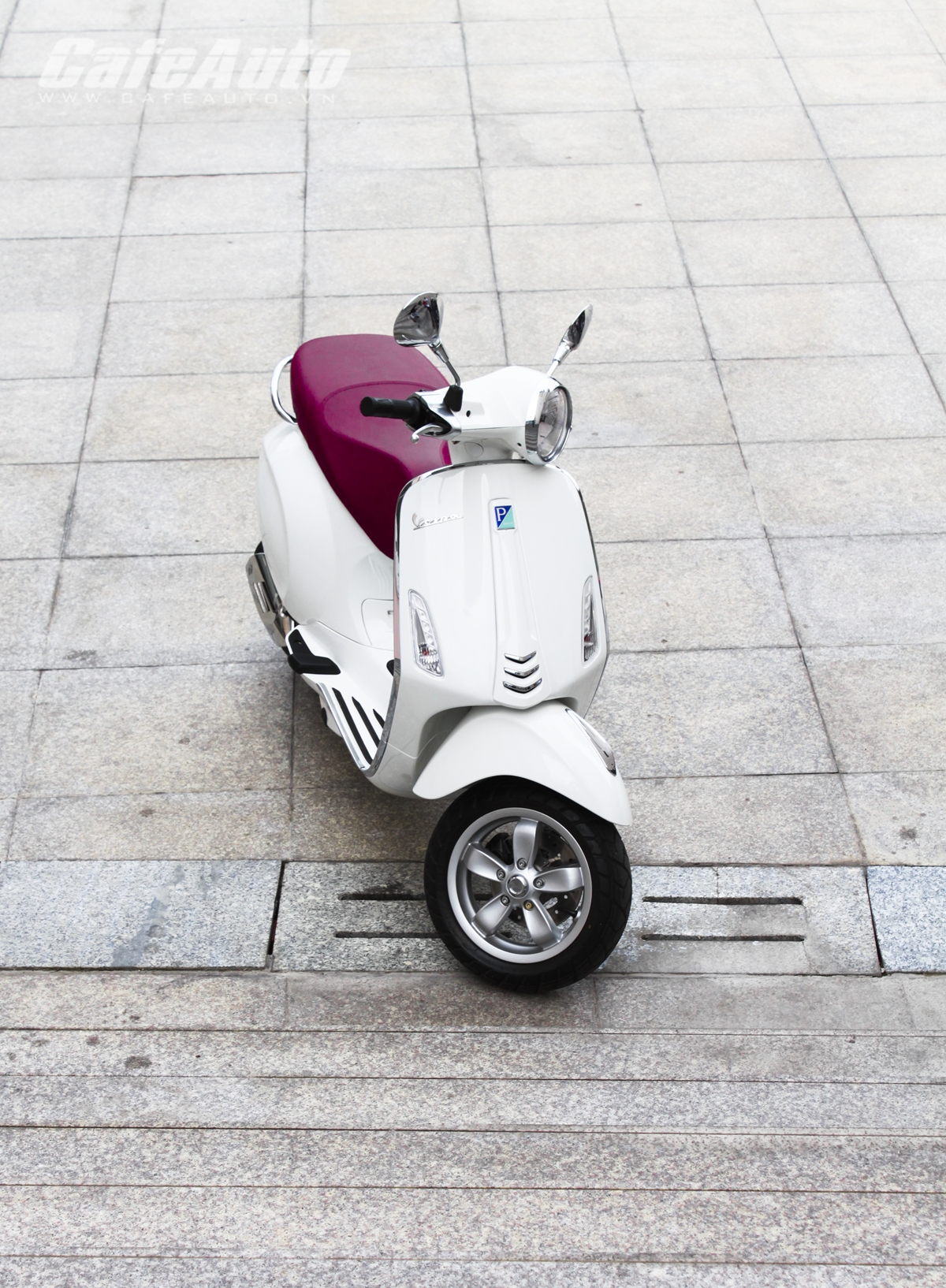 Primavera uses 125 3v ie engines, which Piaggio has used on Vespa LX and its recent product lines. Piaggio also made improvements to the powertrain, suspension and engine components, reducing vibration by up to 40% compared to the previous generation. Piaggio said Primavera only consumes 1 liter of gasoline for a distance of 64km if you run the station at 50km / h, equivalent to 1.56 liters / 100km. 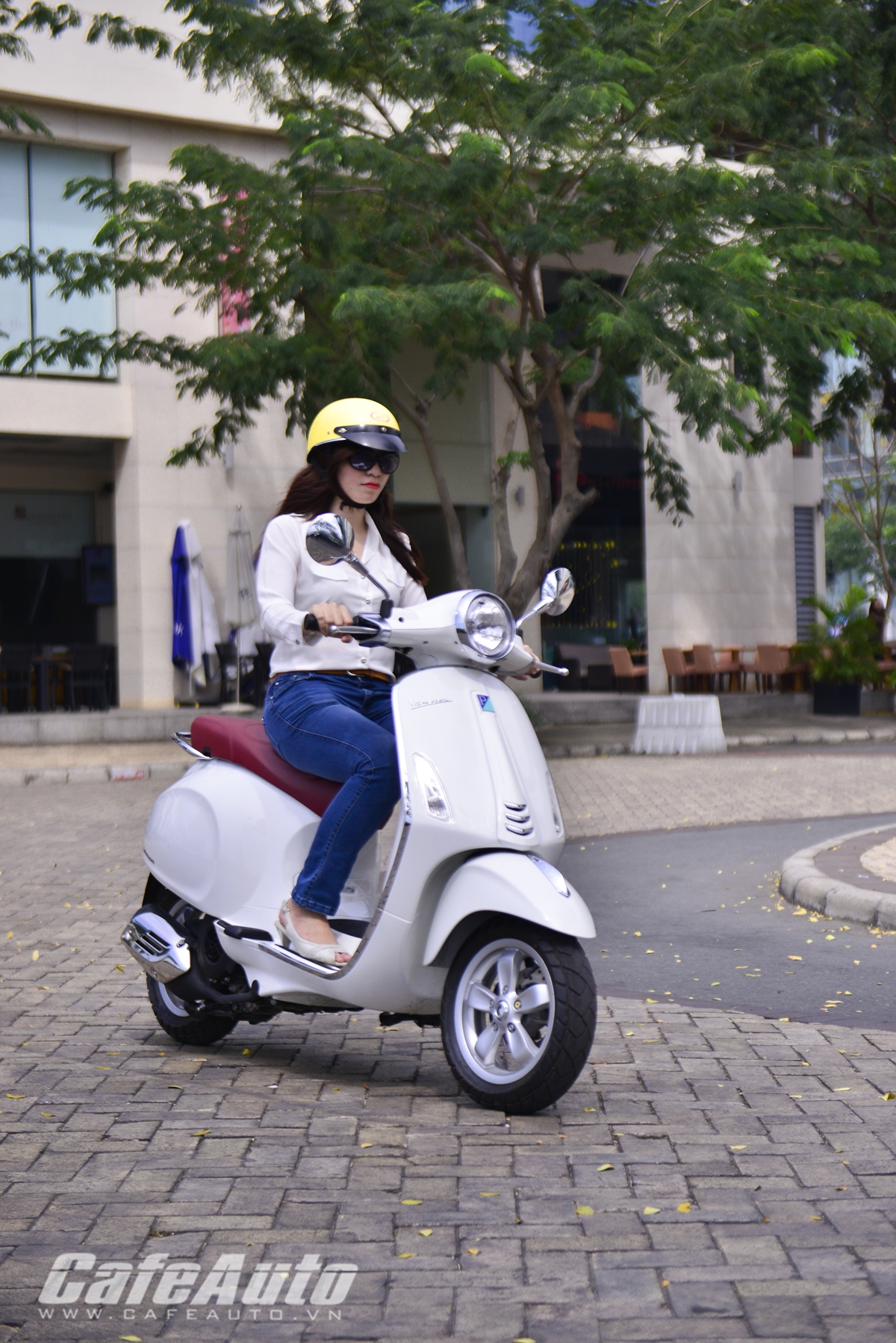 Sitting in the car, Primavera feels quite comfortable because the seat has been redesigned to be more convenient to Asian physique. Squeeze the left brake and press the start button, Primavera vibrates slightly, the sound from the exhaust indicates that the car has started to get ready to start operating. Compared to the noise level with the Vespa LX when starting, the Primavera is much quieter. However, the exhaust sound is somewhat loud compared to a model for women. 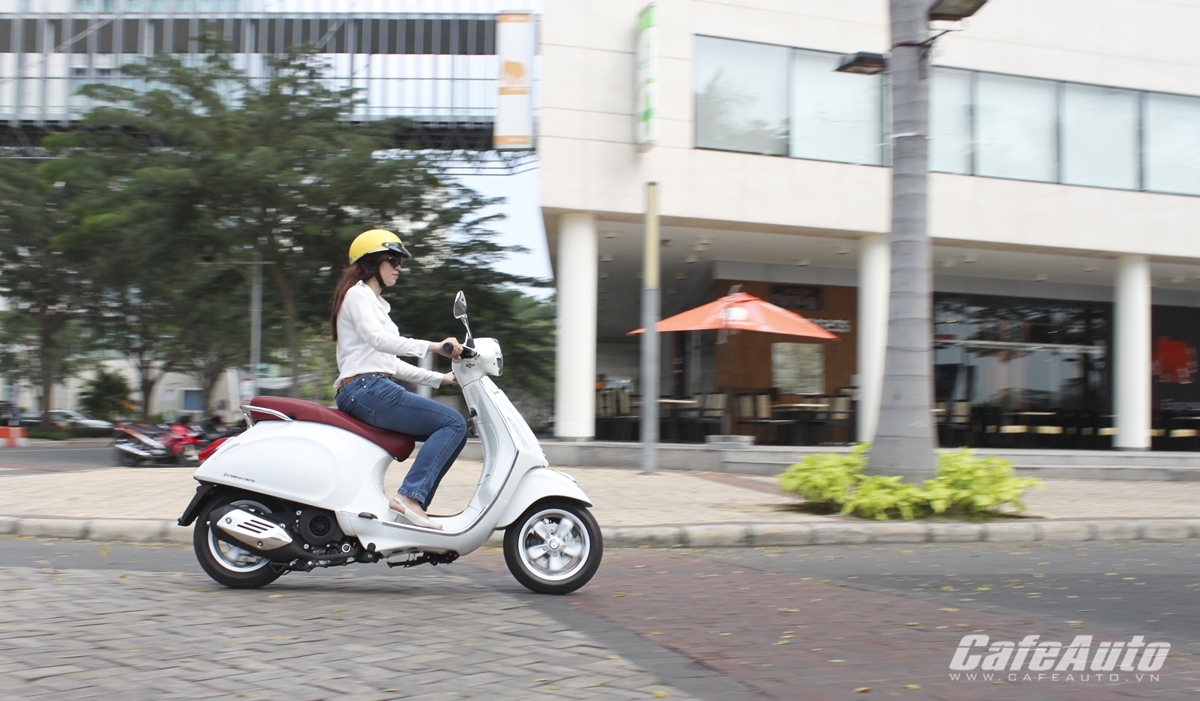 Turn the throttle slightly, the car slowly rolls, if you are someone who likes a strong acceleration, Primavera will make you a little disappointed because the car accelerates quite slowly and responds slowly to the throttle. At the speed range of 10-30km / h, Primavera feels quite stable driving, but the speed that Primavera is most stable is from 40-55km / h, the car feels smooth and glides smoothly. Thrusting hard to test the ability to accelerate when the vehicle is at 50 km / h, Primavera soared quite fast, at speeds over 60 km / h the car began to have a slight vibration phenomenon and a little driving feeling floating”.

Testing for vehicles running on speed humps and rough roads shows the car’s suspension system is somewhat hard. Although, Piaggio has used the new suspension system on Primavera, but this system has not achieved high smoothness. 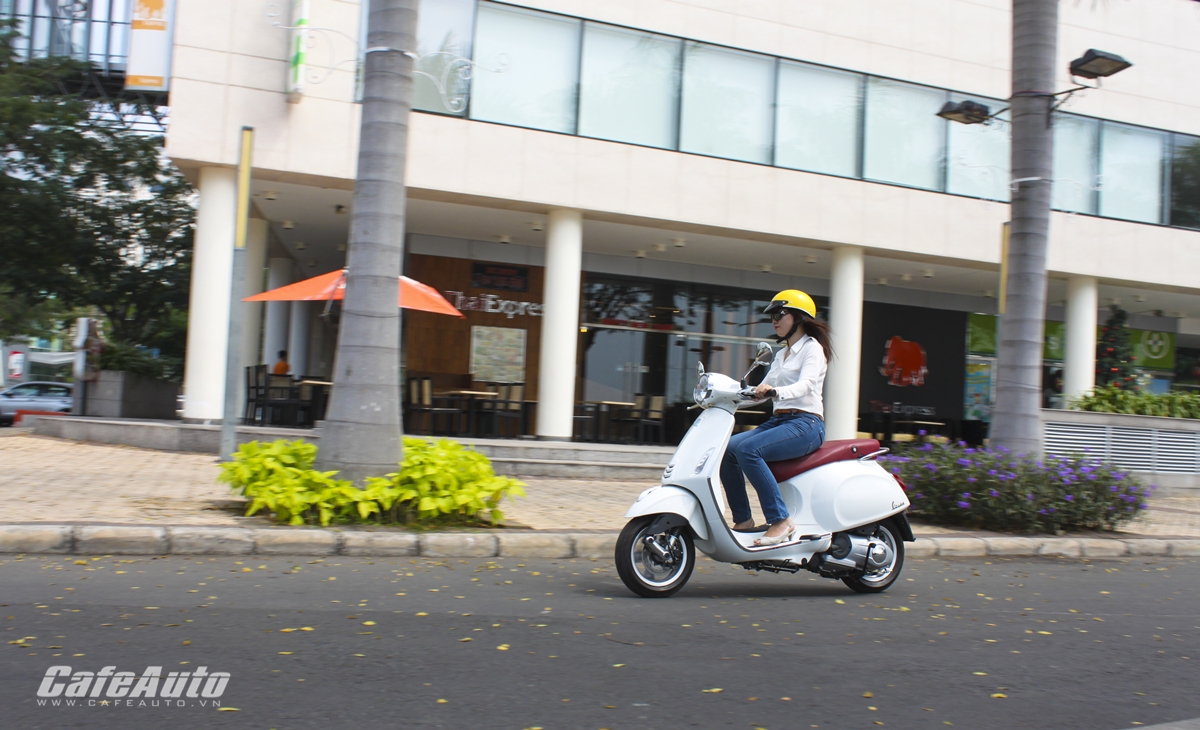 Switch to the cornering test and steer the steering repeatedly. Reporter Cafeauto let the car move at 40 km / h and into the sleeves, Primavera is somewhat unstable and unstable for those who are not familiar with the steering wheel, but once familiar with Primavera, users enjoy it when not have to brace when cornering. Driving continuously to test the flexibility of the vehicle when moving, Primavera steering wheel does not seem soft as on the Vespa GTS. However, with a car aimed at female customers, this little drawback is not worth paying attention to. 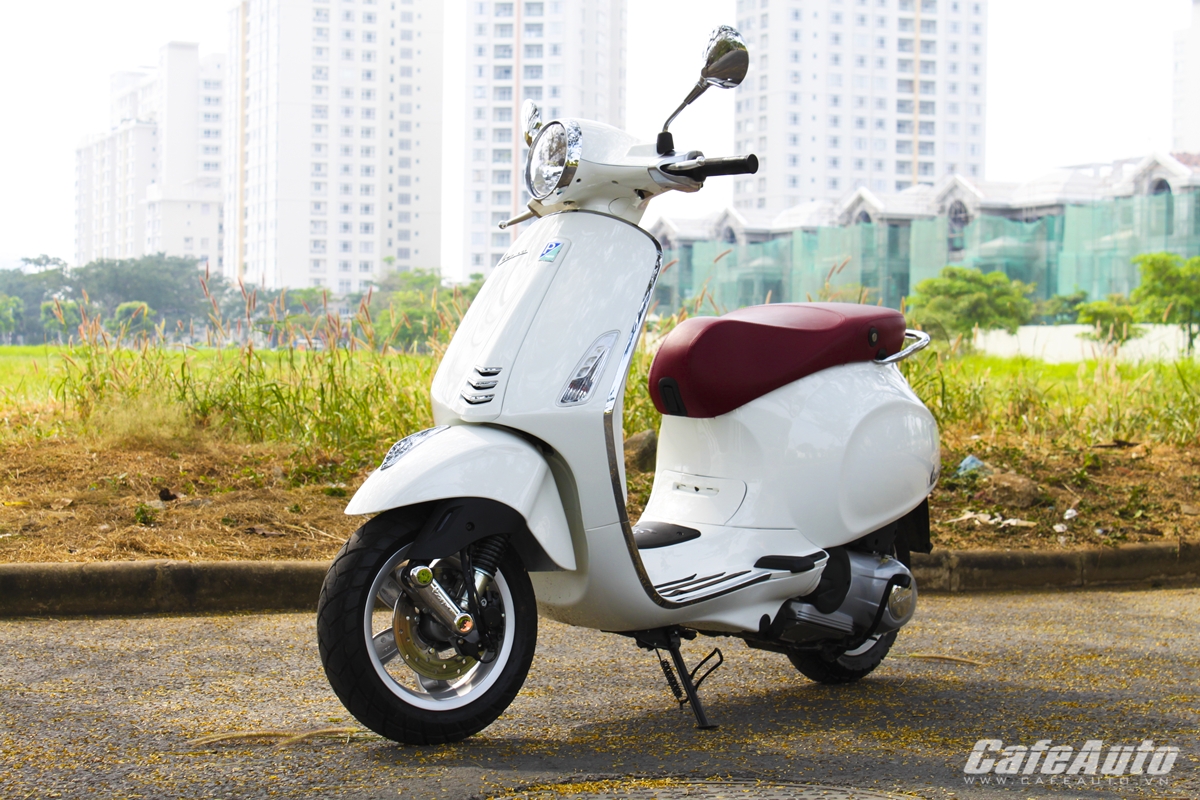 After nearly 3 hours of driving on the streets of Saigon, Primavera gave us the experience of unforgettable emotions. It can be said that Primavera has met quite well the requirements for an urban car that is aimed at women by Piaggio.

With a sophisticated, youthful design and attractive performance for an urban car, Primavera deserves to be the car that continues the reputation of the famous Vespa line. 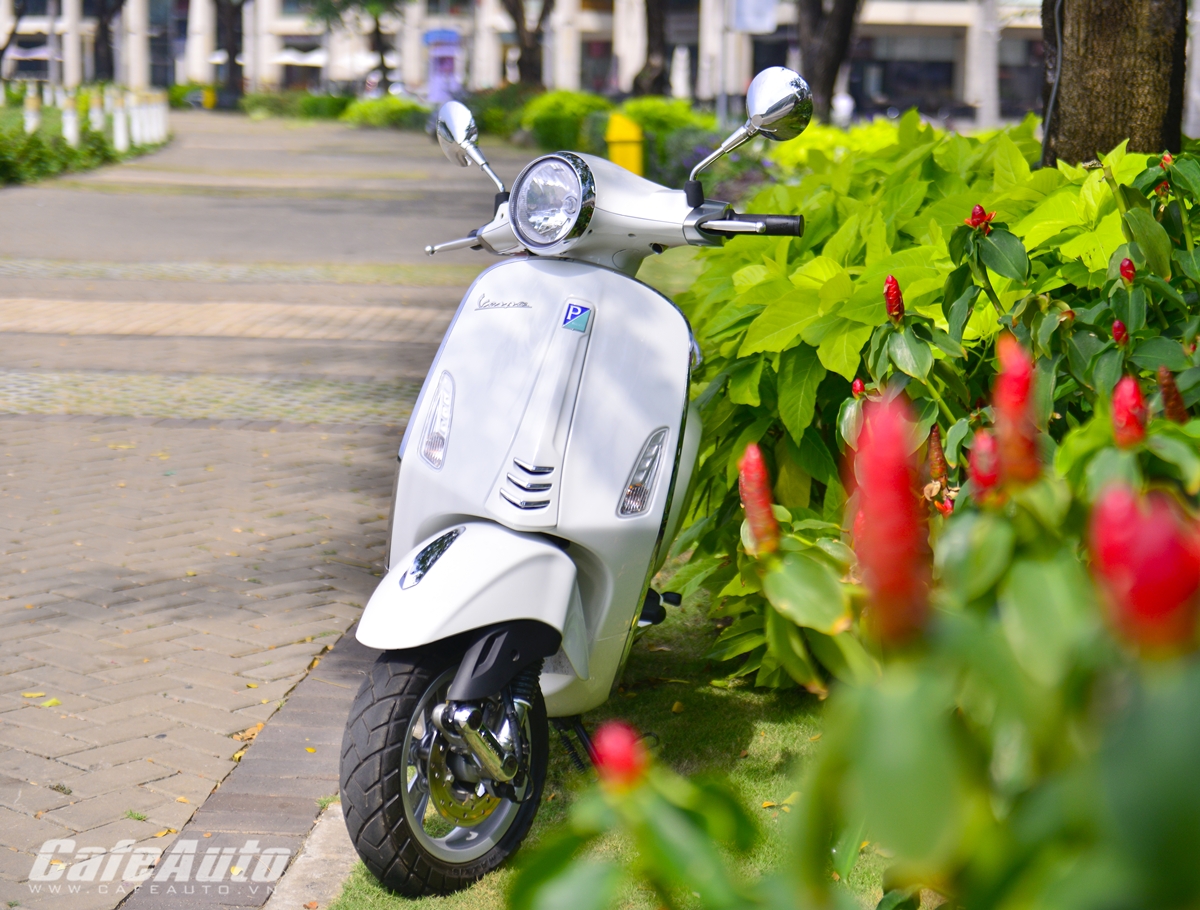 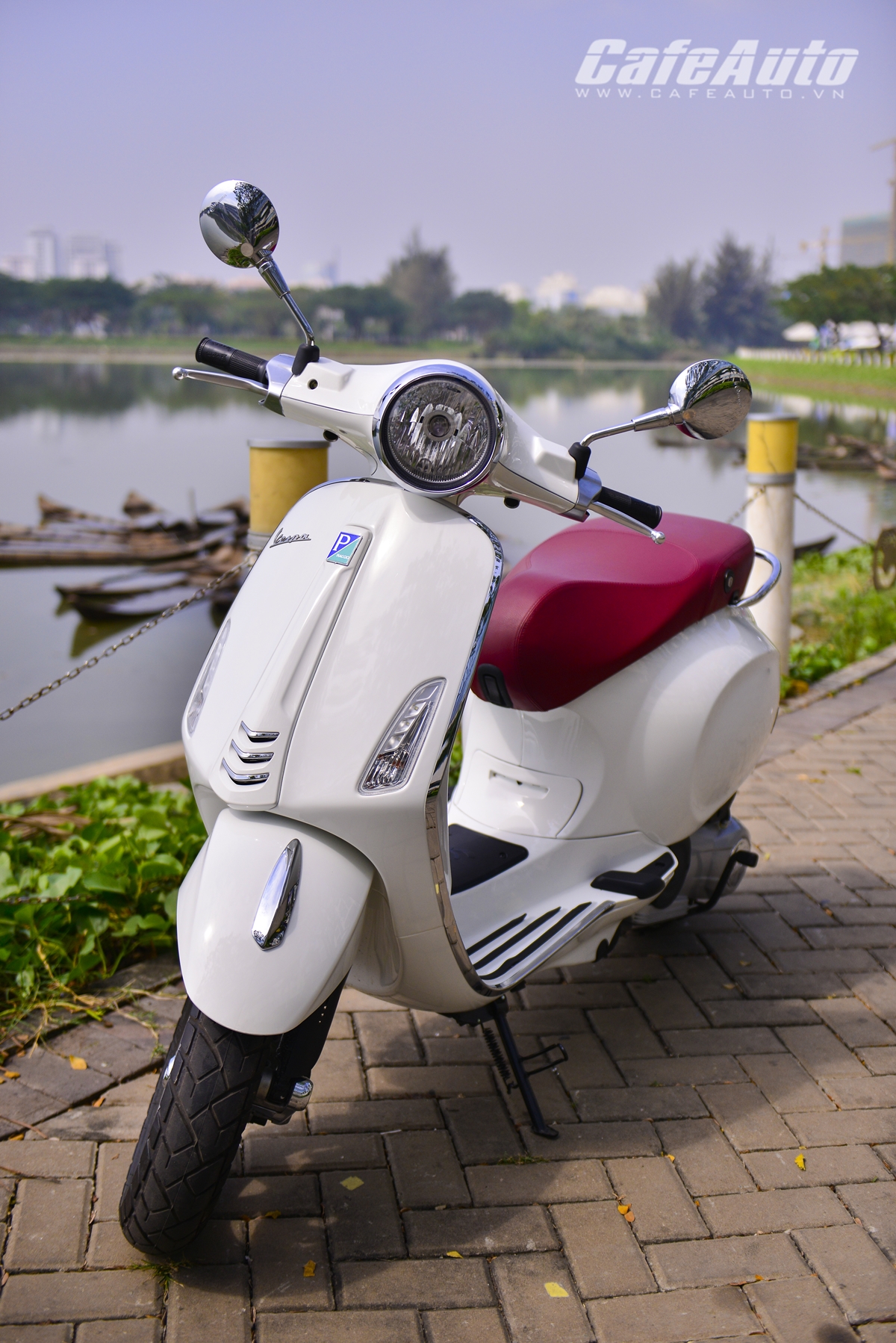 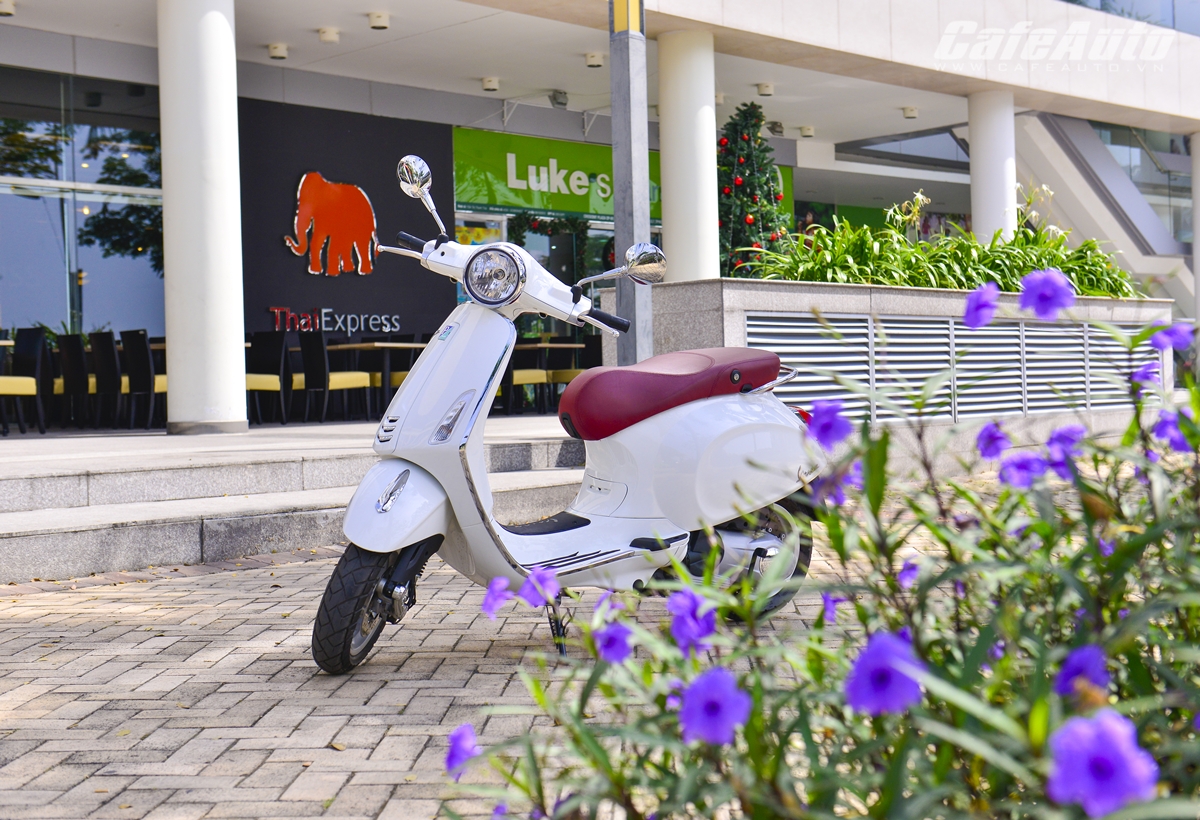 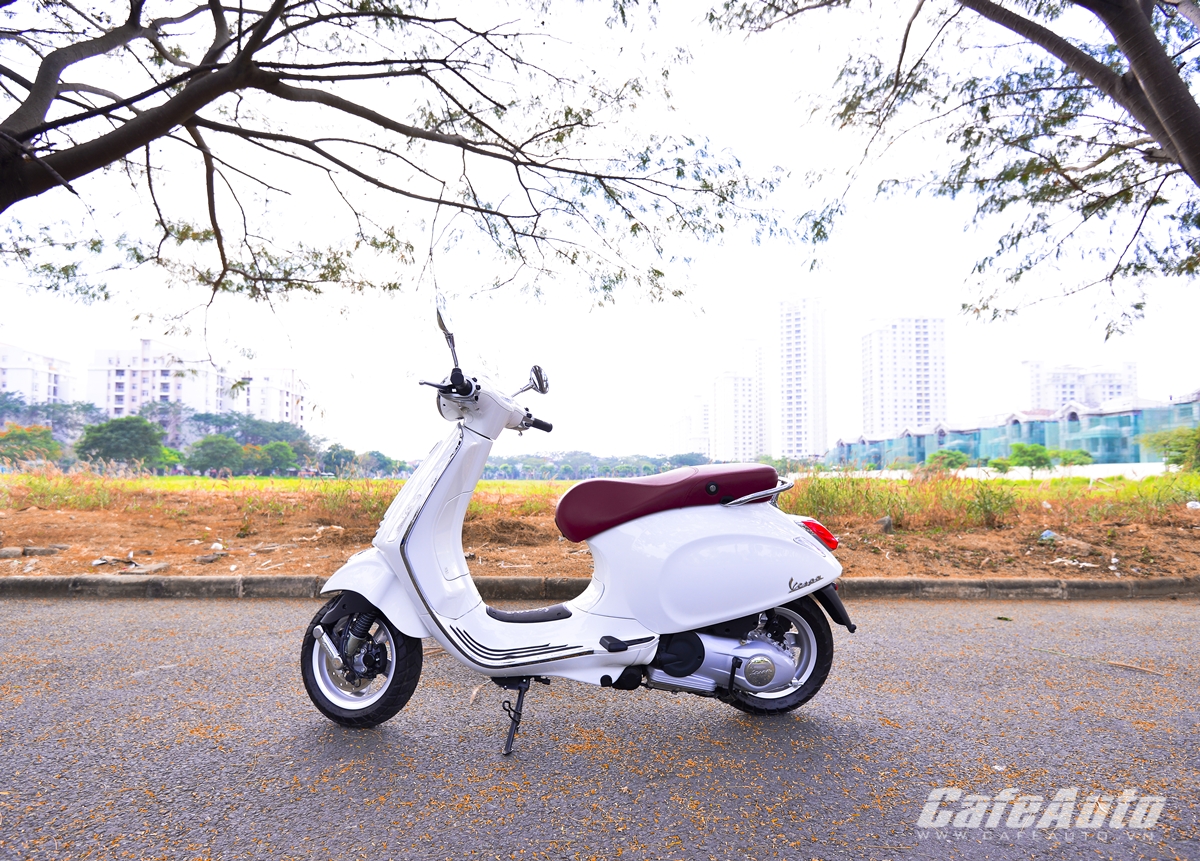 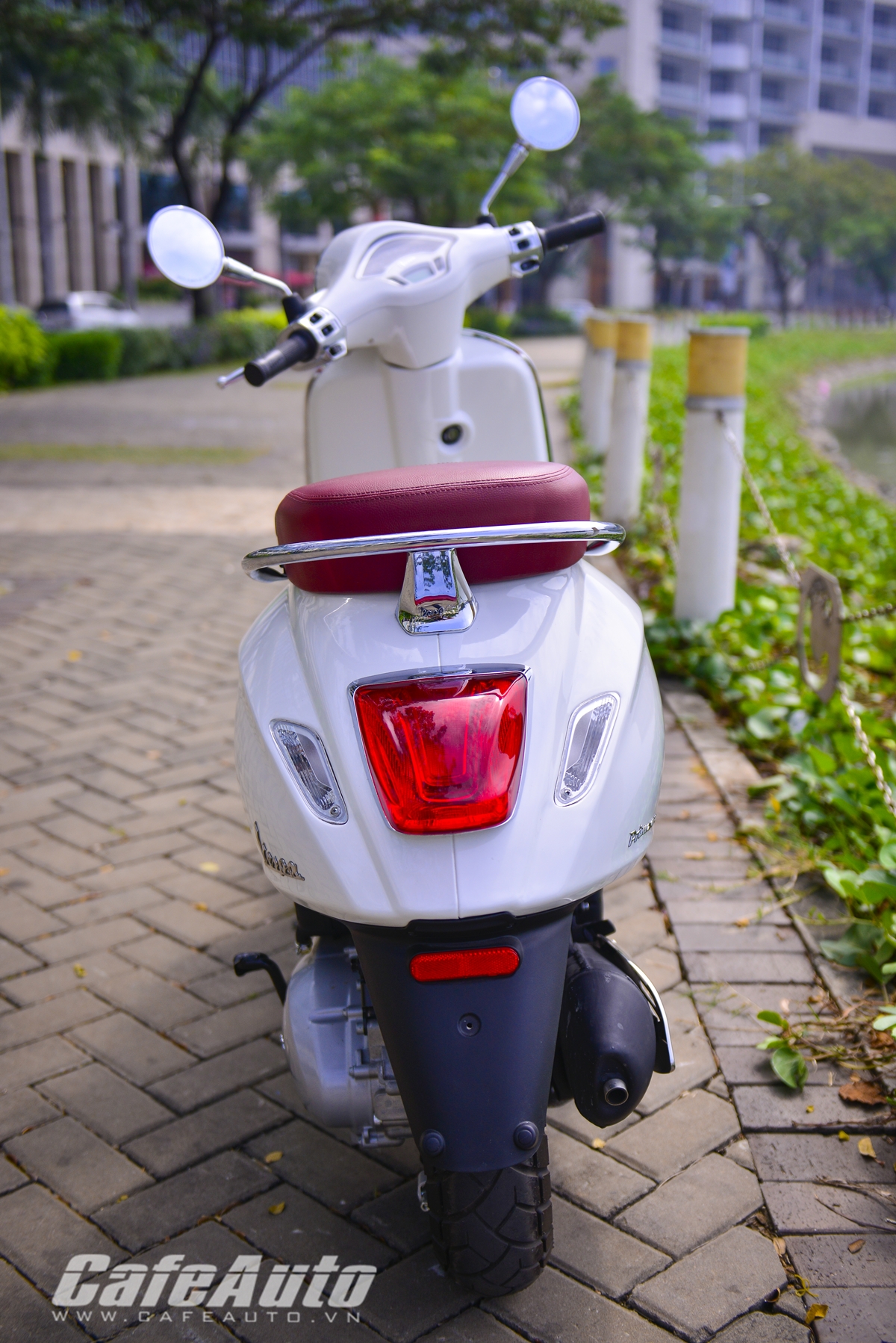 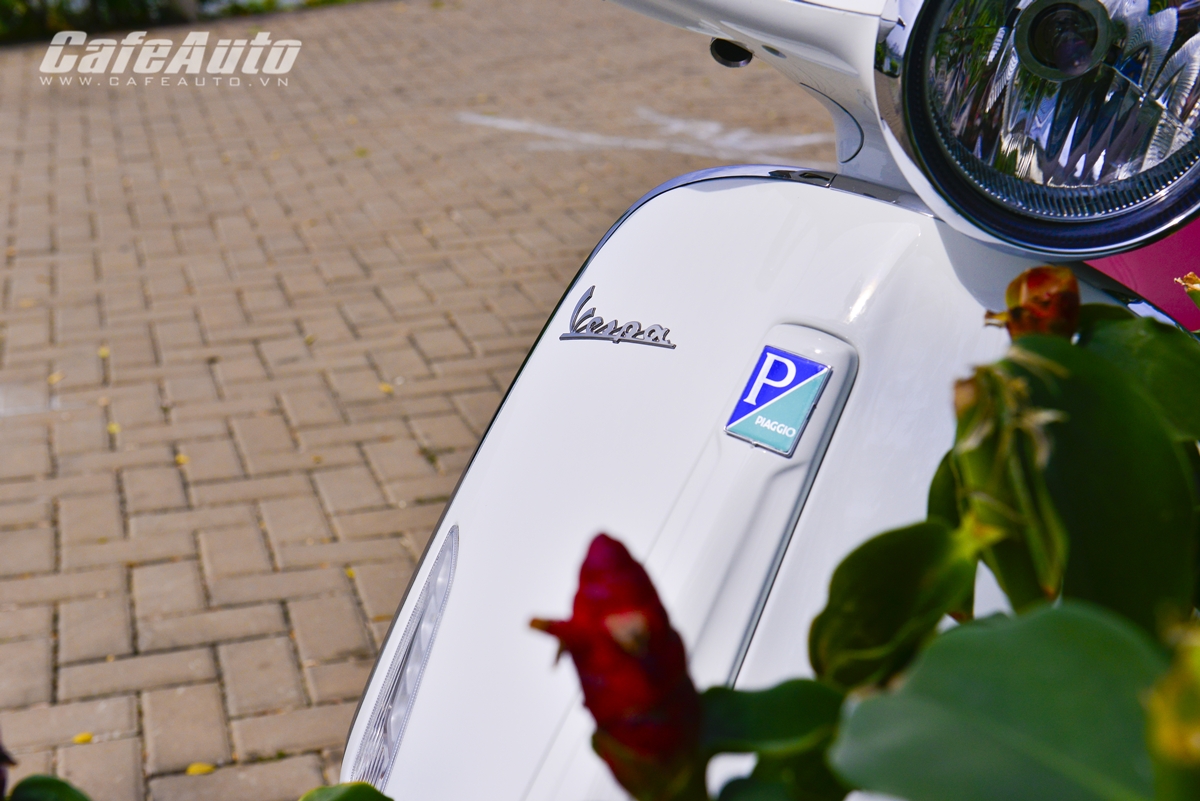 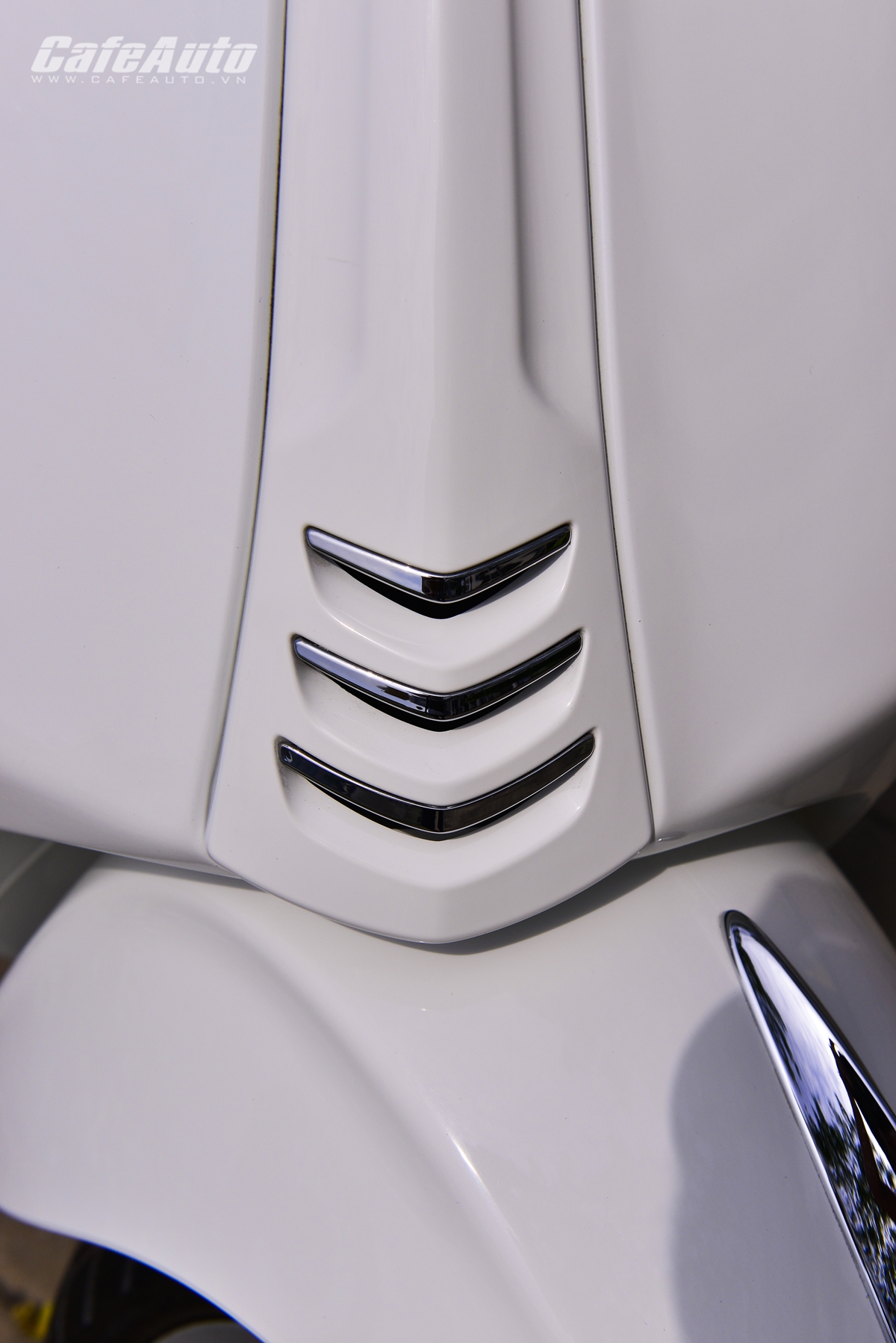 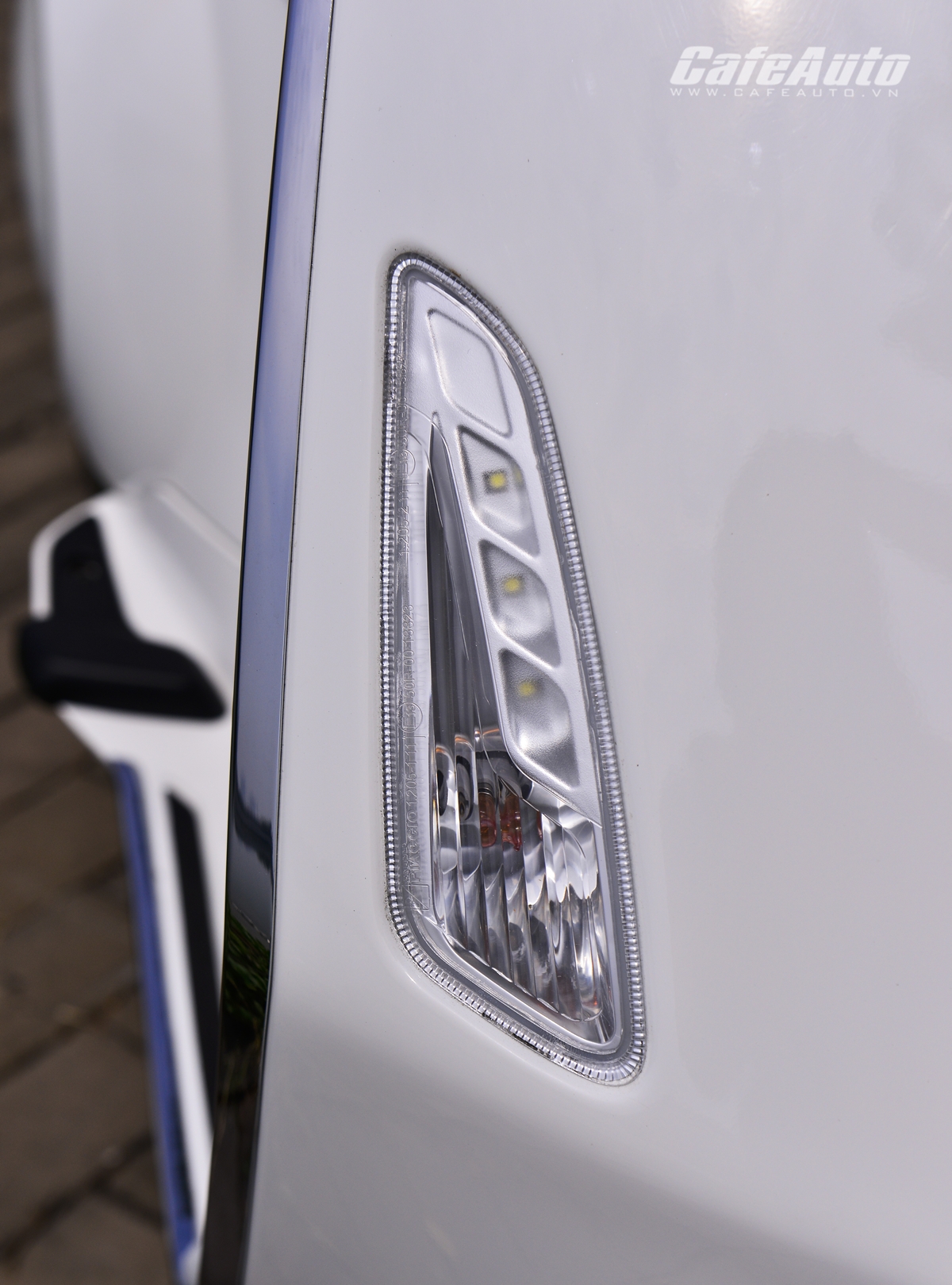 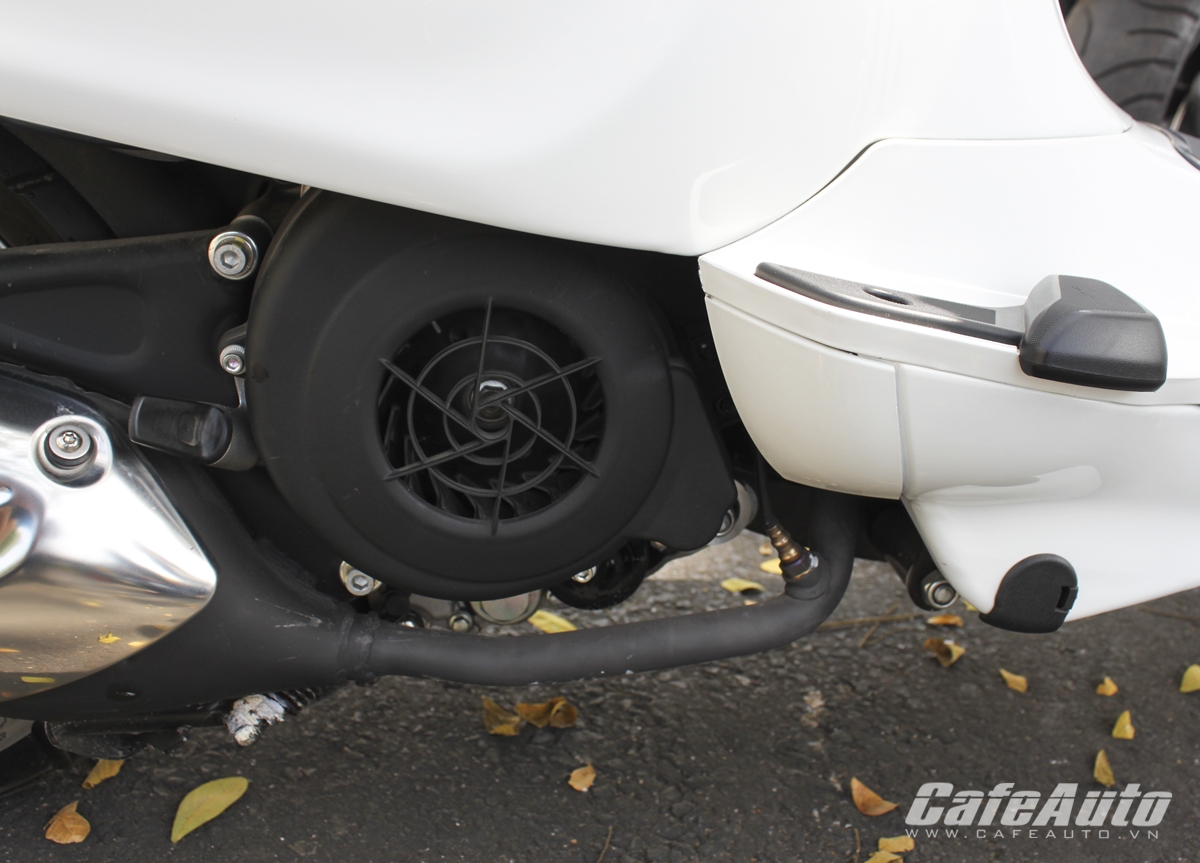 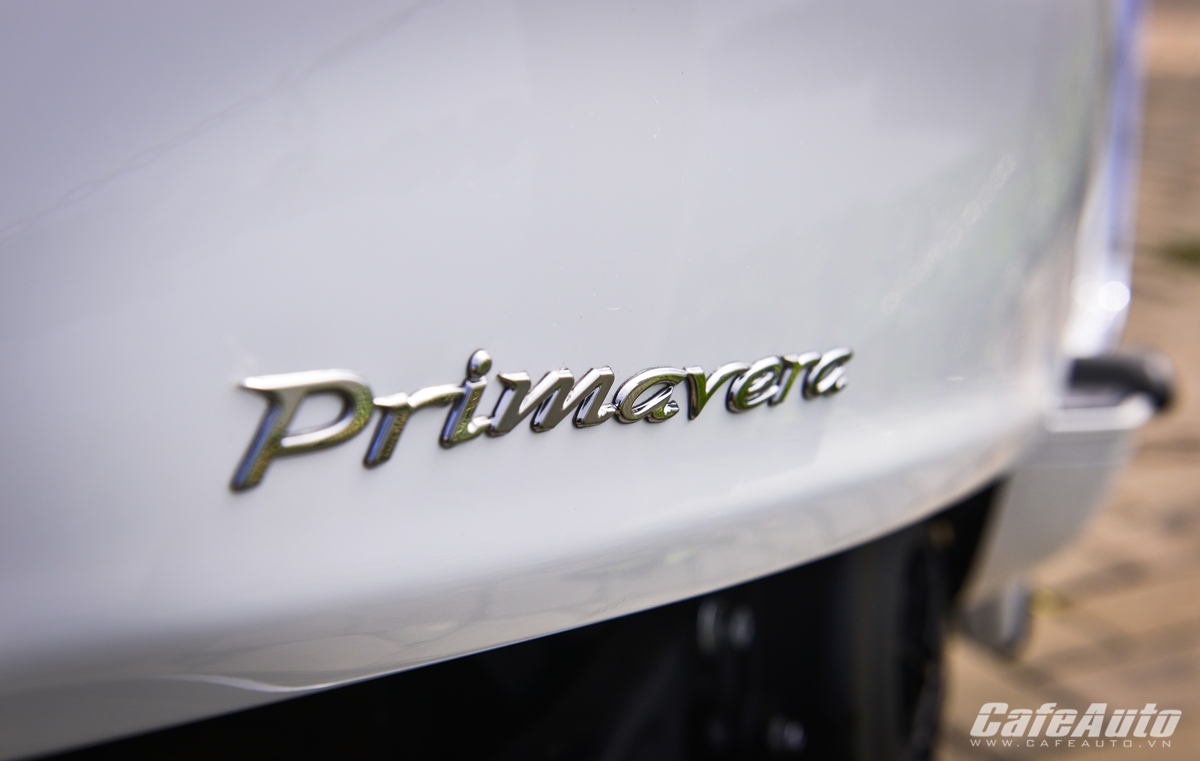