Sickness usually occur in early pregnancy and last until the third month. They usually occur in the morning, just after waking up. However, there are women who suffer from nausea at other times of the day. The intensity of nausea varies from pregnant to pregnant. 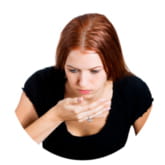 There is no certainty among the medical community as to the causes of morning sickness. However, they are thought to be related to hormonal changes in the woman’s body during pregnancy. Hormonal rebalancing over time would also explain the end of nausea problems in the morning after the first trimester.

How to avoid morning sickness

First of all, eat five small meals a day. Nausea is usually stronger when you are hungry. Eat a small snack before bed to decrease the time without food until the next morning. Also, avoid stress in the morning and don’t eat breakfast too late. Drink a lot of water and test foods and drinks that improve motion sickness.

Seek a balanced diet during pregnancy. Avoid spicy, acidic or fried foods and eat little fat. Choose foods that are high in carbohydrates, protein and plenty of vitamin B, such as yogurt.

You should talk to your gynecologist as soon as possible about feeling sick in case of very severe nausea and vomiting. In summary, consult your doctor when symptoms interfere with your life. The doctor may, for example, prescribe medication to relieve symptoms. If you vomit frequently, your doctor may even admit you to avoid complications.