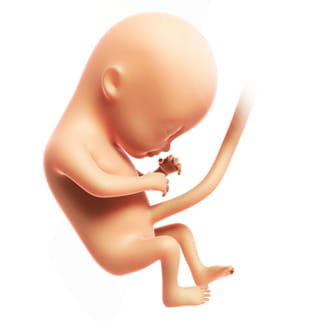 How is the embryo in the first month of pregnancy

At the end of the first month of gestation, the embryo, the result of the union of an egg and a sperm, weighs approximately one gram and measures only four millimeters.

Amenorrhea in the first month of pregnancy

The first month of pregnancy corresponds to the first four weeks of pregnancy and the sixth week of amenorrhea, that is, interruption of menstruation. In general, a delay of more than two weeks in a woman’s menstruation is a strong indication of an ongoing pregnancy.

The union of the egg and a sperm is called fertilization. The cell formed from this encounter is called a zygote. Subsequently, the zygote divides into two cells, which will then undergo another series of divisions until it forms an organism. At the end of just three days, the zygote will already be divided into 16 cells.

Development of the zygote in the first week

During the first week of gestation, the zygote advances through the fallopian tubes and reaches the uterus between the third and fifth days. At the end of this initial week, the fertilized egg will adhere to the endometrium, in a process that receives the name of nesting, and to begin its development.

Development of the zygote in the second week

The zygote continues its development in the second week. At that point, the embryo divides into two different cells. One of them, fixed in the uterus, will become the baby and the other will constitute the placenta, the mother’s bond with the baby that will provide the child with the essential elements for its development. The zygote is 1.5 mm at the moment.

Development of the zygote in the third week

This week, embryonic cells are already more organized, with more than 150 cells. They exist three layers of cells. The first will give rise to the skin, nails, teeth, hair, nose, lips, breasts and nervous system. The second will be the muscles, bones, heart, sexual organs and blood. Finally, the third layer will form the tongue, urethra, bladder, lungs, liver and digestive system. In this third week, it is already possible to attest to the occurrence of pregnancy.

Development of the zygote in the fourth week

The zygote becomes an embryo and the development of the future baby begins to accelerate. Most of the organs start their growth, as well as members and part of nervous system. In the fourth week, the heart emits its first beats and the brain and spine separate. The placenta and umbilical cord are installed in their respective places. At the end of the first month of gestation, the embryo floats in a bag containing the amniotic fluid. The embryo is already visible on an ultrasound.