Like every other new technology on smartphones, the selfie camera hidden under the screen is still too nascent to become massively available in the near future.

Earlier this month, the Chinese brand ZTE made a splash in the market when it launched the Axon 20 5G, the first commercial smartphone to feature selfie camera technology hidden under the screen. Then, it was VinSmart’s turn to launch the Vsmart Aris Pro with a similar highlight. Both of these smartphones cost the press a lot of ink, as well as create excitement in the tech community, when the dream of a true borderless phone without defects is closer. time is over.

However, it is no coincidence that many manufacturers are not interested in this “technology of the future”. The answer is simple: trade-offs are inevitable. It is physically limited, just as Bluetooth true wireless headphones will always have latency. As Bkav CEO Nguyen Tu Quang once shared, ZTE’s decision to launch the Axon 20 5G is a brave one. Bkav itself, with the criterion of putting camera quality first, is not willing to give up despite being offered a screen with hidden camera support.

And recently, VnReview had the opportunity to quickly experience the ZTE Axon 20 5G borrowed from Dienthoaihay.vn store and thereby understand the current thinking of smartphone manufacturers. The selfie camera hidden under the screen will definitely be the key for us to move into a flawless smartphone future, but at the moment, this technology is still too young to replace solutions like screens. punch holes, water drops, …

How is the camera technology hidden under the screen realized?

Essentially, the OLED screen itself is a very thin, see-through film. The OLED screen film contains very small LED bulbs with dense density, difficult to see with the naked eye. The denser the density of this LED bulb, the higher the screen resolution and the lower the see-through. 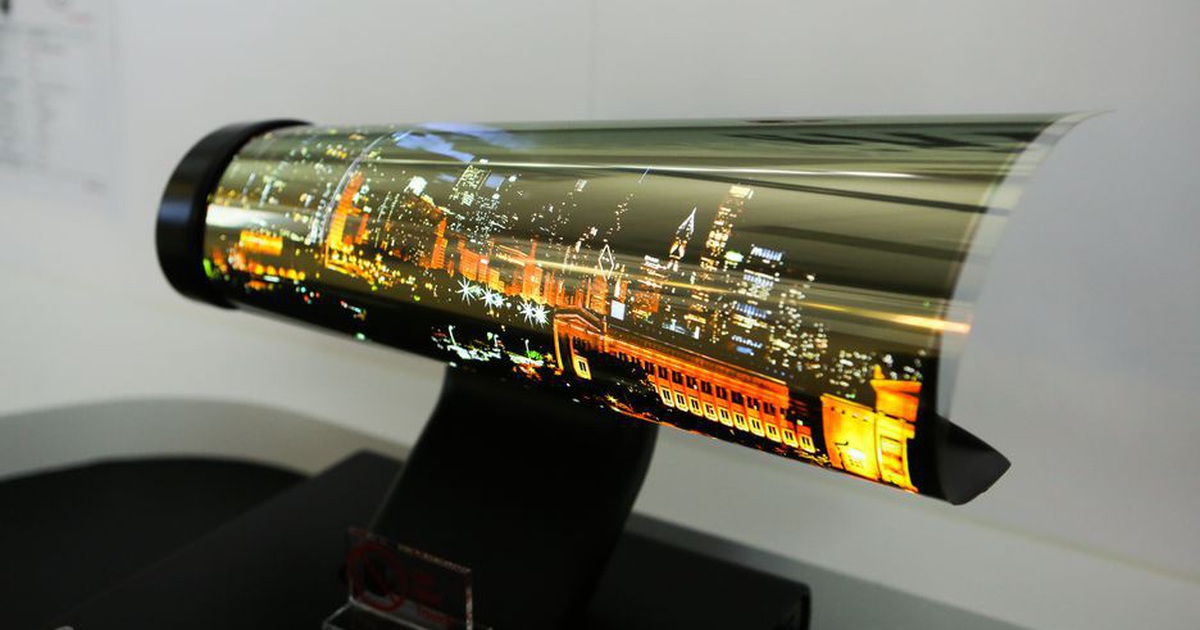 An image of an OLED panel, also shared by Mr. Nguyen Tu Quang

To make camera technology hidden under the screen possible, display manufacturers will reduce the density of LED bulbs in the area where the camera is located, so that light can enter the image sensor. However, if the LED bulbs are reduced to get the best camera quality, the area will no longer be able to display the image anymore, which is also the “mole” punching design that we often see today. Thus, the reduction of LED bulbs will be limited, and according to Nguyen Tu Quang, currently, the number is 50%. 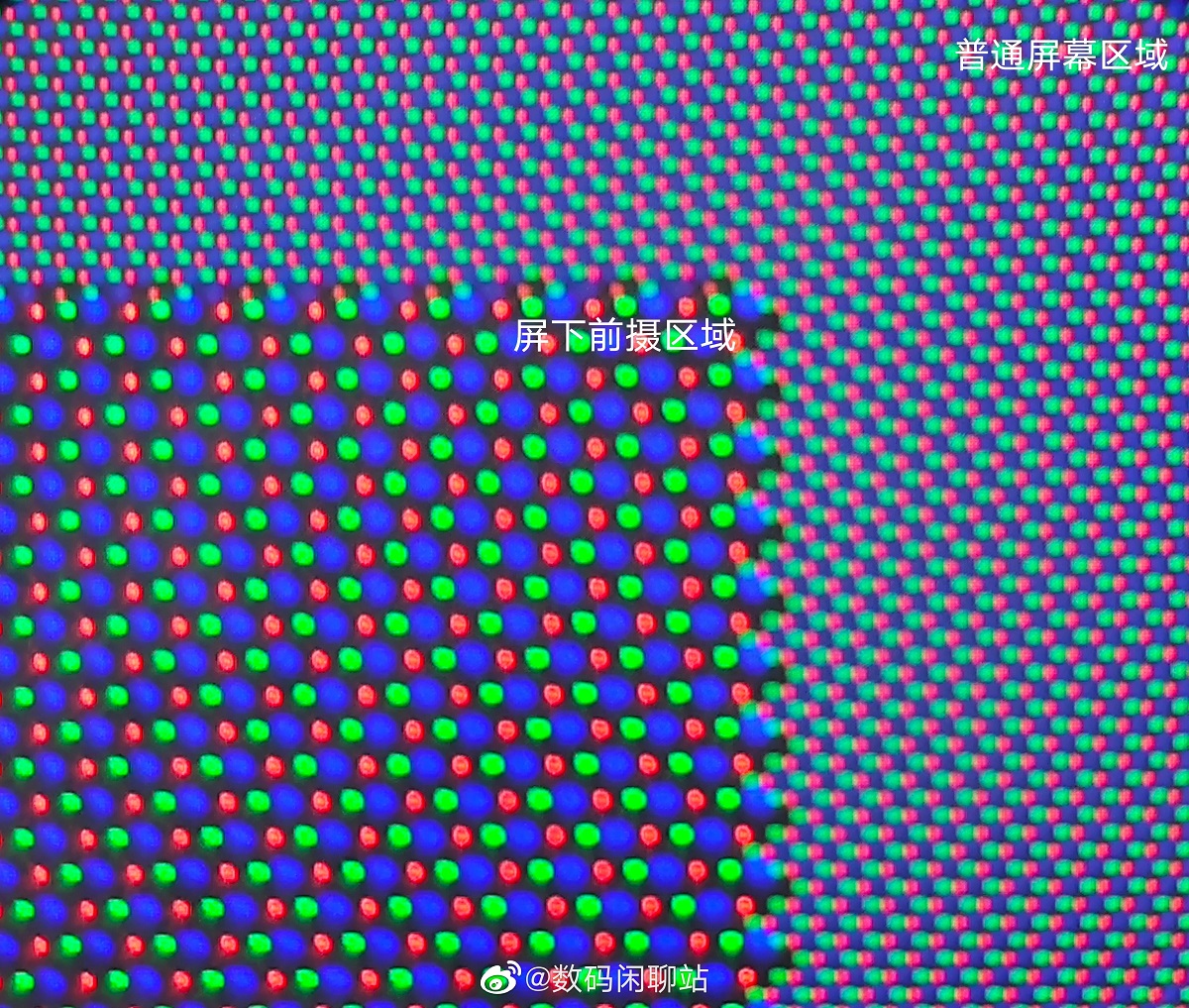 A close-up shot of the ZTE Axon 20 5G’s hidden selfie camera area, the number of pixels is significantly reduced compared to the surrounding 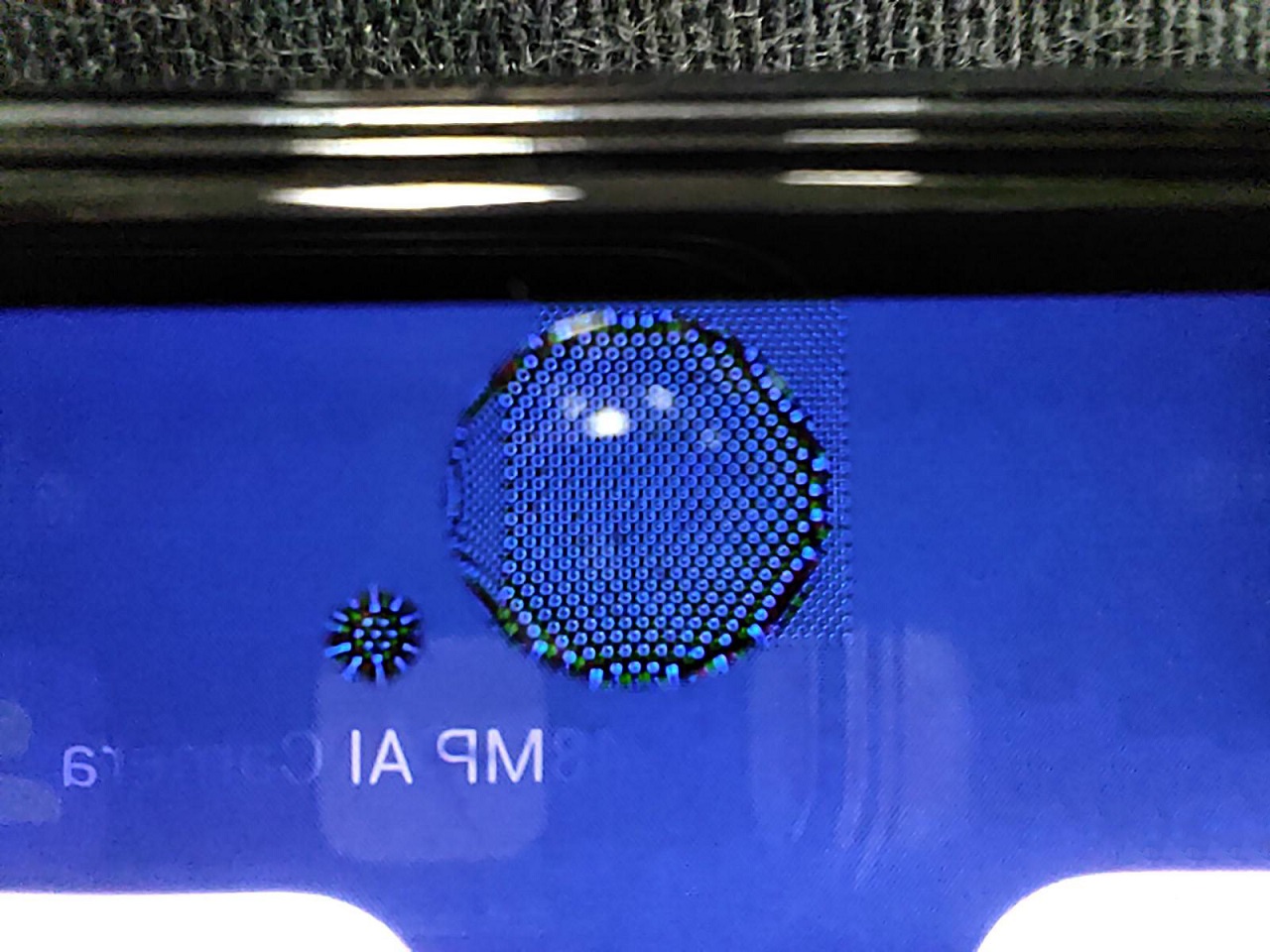 The snapshot with the macro camera from the phone, we have dripped a drop of water on this area to make the pixels easier to see.

With such a decrease in the amount of light entering the sensor, it is obvious that the quality of the image will be affected more or less. It is easiest to see that the image will not guarantee the sharpness, and in some cases it will result in an image that is not true to reality.

The camera’s design is hidden below the screen 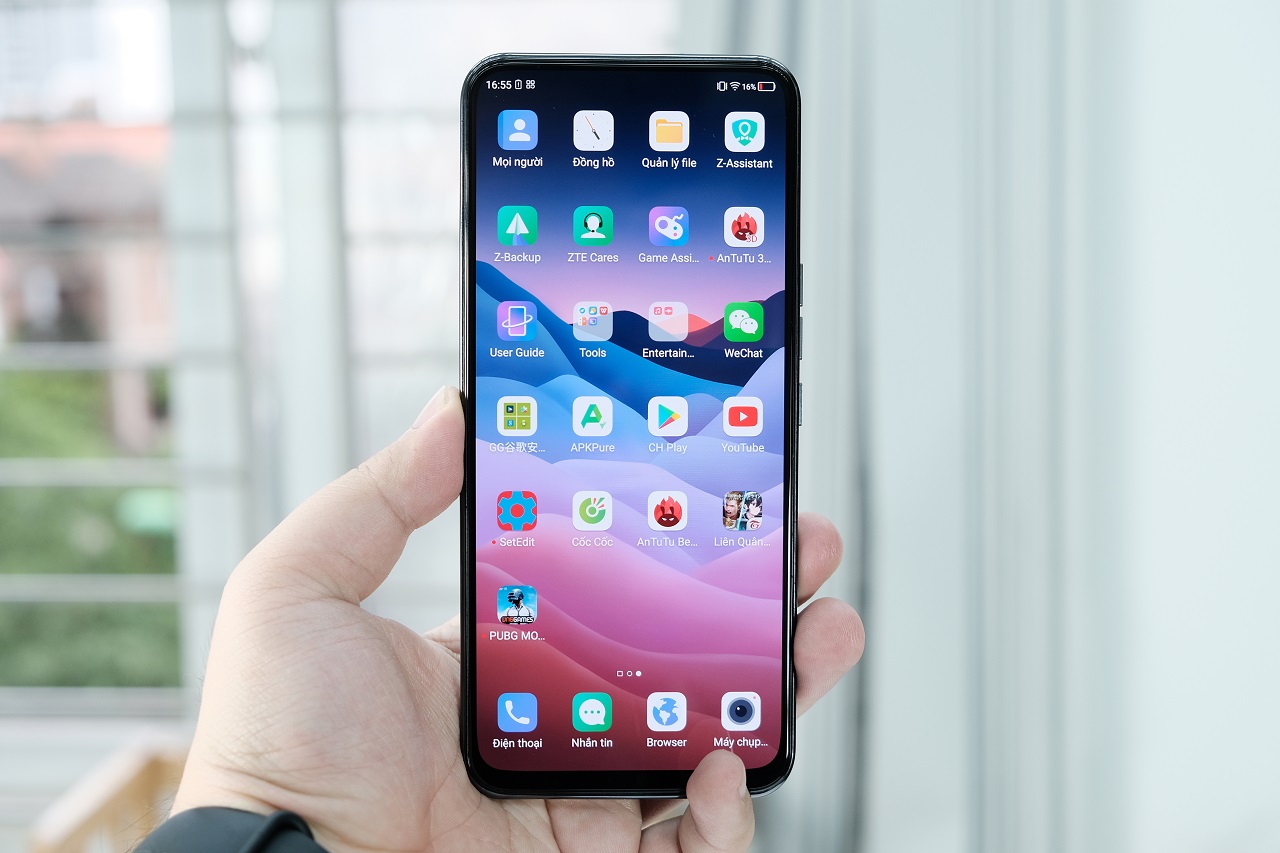 In terms of first visual impressions, the ZTE Axon 20 5G has partly shown the design of a smartphone from the future. Although the bottom edge or “chin” part of the device is still thick, a screen without “defects” will clearly bring a very airy and high-class viewing experience. We used to have that feeling with the camera smartphone “protruding”, but the internal control mechanism makes the body significantly thicker, such as the first Oppo Reno 9mm thick, Oppo Reno2 9.5mm, Redmi K20 Pro 8.8 mm, … Meanwhile, ZTE Axon 20 5G has a large 6.92 inch screen, a 4220 mAh battery with a thickness of only 8mm. 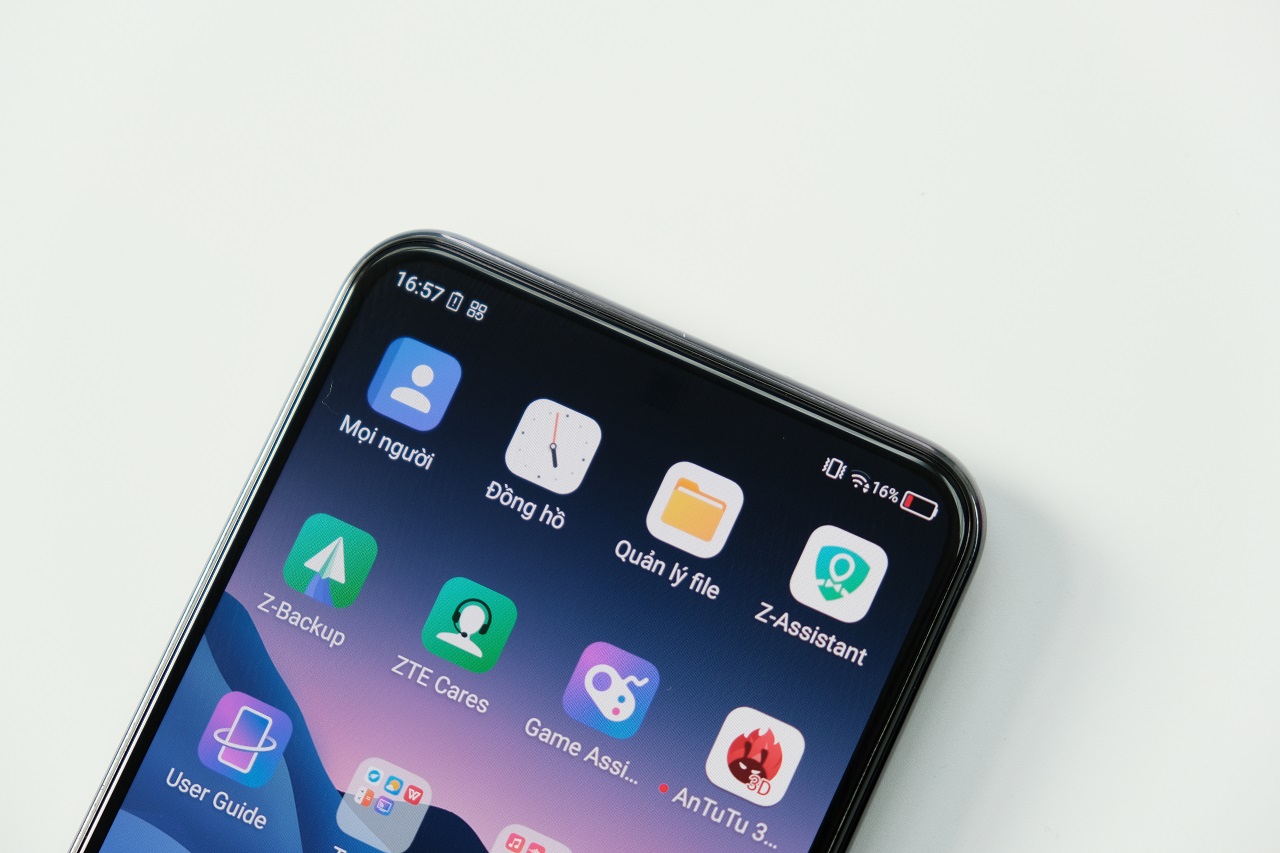 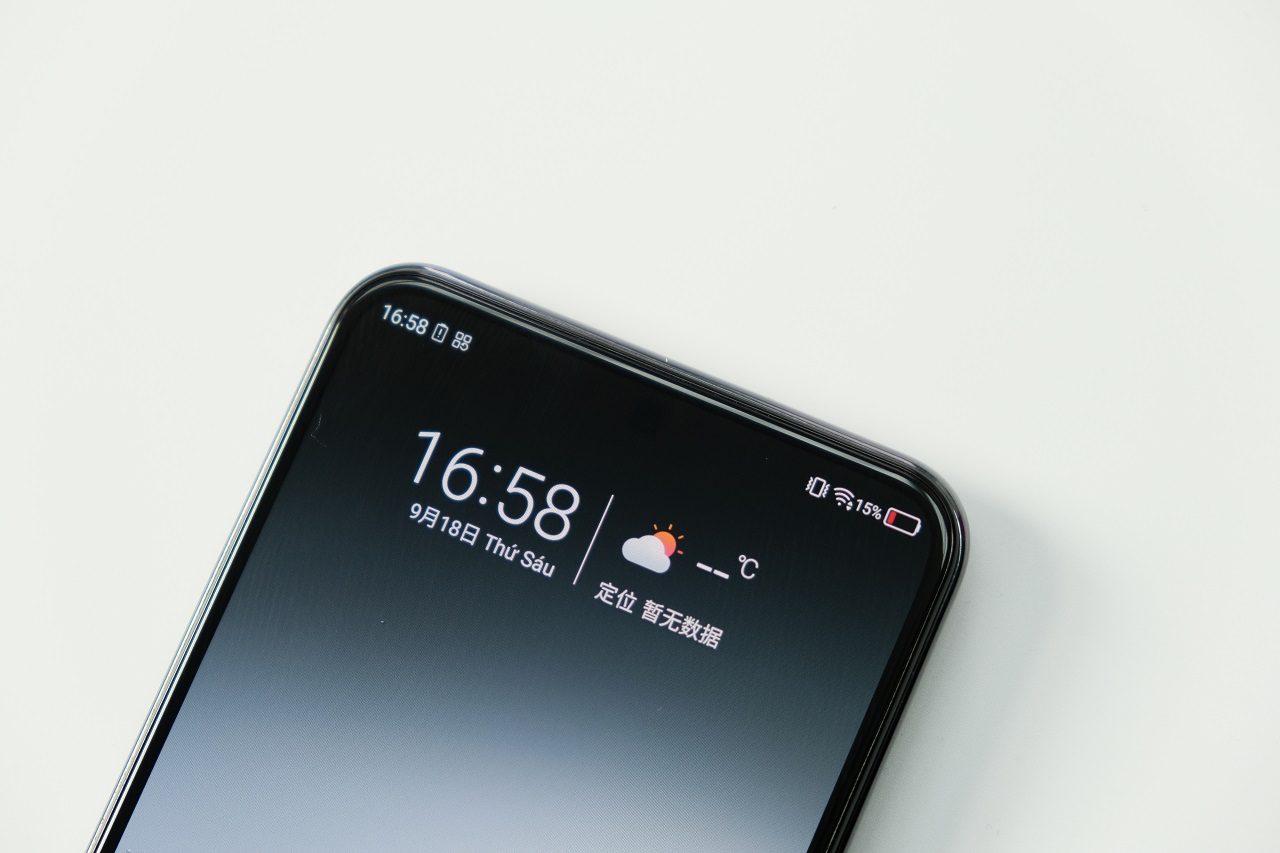 When displaying dark images, you will be nearly unable to detect the presence of the hidden camera below the screen. ZTE has been very clever when it comes to pre-installed default wallpapers that are always dark in the camera area, and the almost absolute deep black nature of the OLED panel also helps a lot for the “hiding” of the selfie camera. . 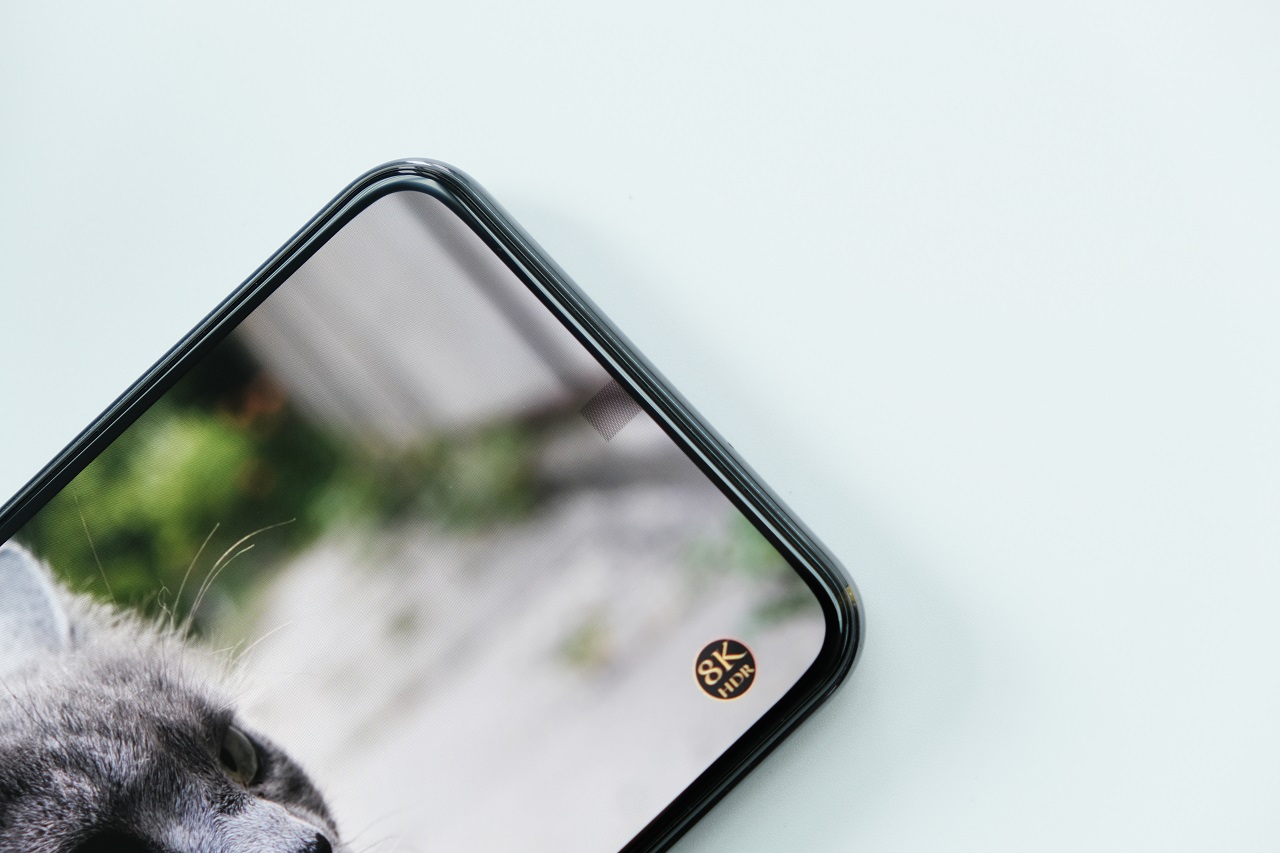 In brighter tones, the camera hiding part is clearly visible from the rest of the displayed content.

However, when displaying bright tones, the screen part is reduced in number of LEDs that appear very clearly, visible from afar. Take a look at this image and ask yourself, is there a difference between it and the perforated screen? And is it worth the trade-off for the quality of the photos?

For the purposes of this article, we’ll just go into the quality of selfie camera shots, including normal shooting (which ZTE calls “selfie”) and a portrait mode that clears fonts. Due to time constraints, we did not have time to test both the selfie camera video capabilities of the Axon 20 5G, but they will basically match the quality of photos. 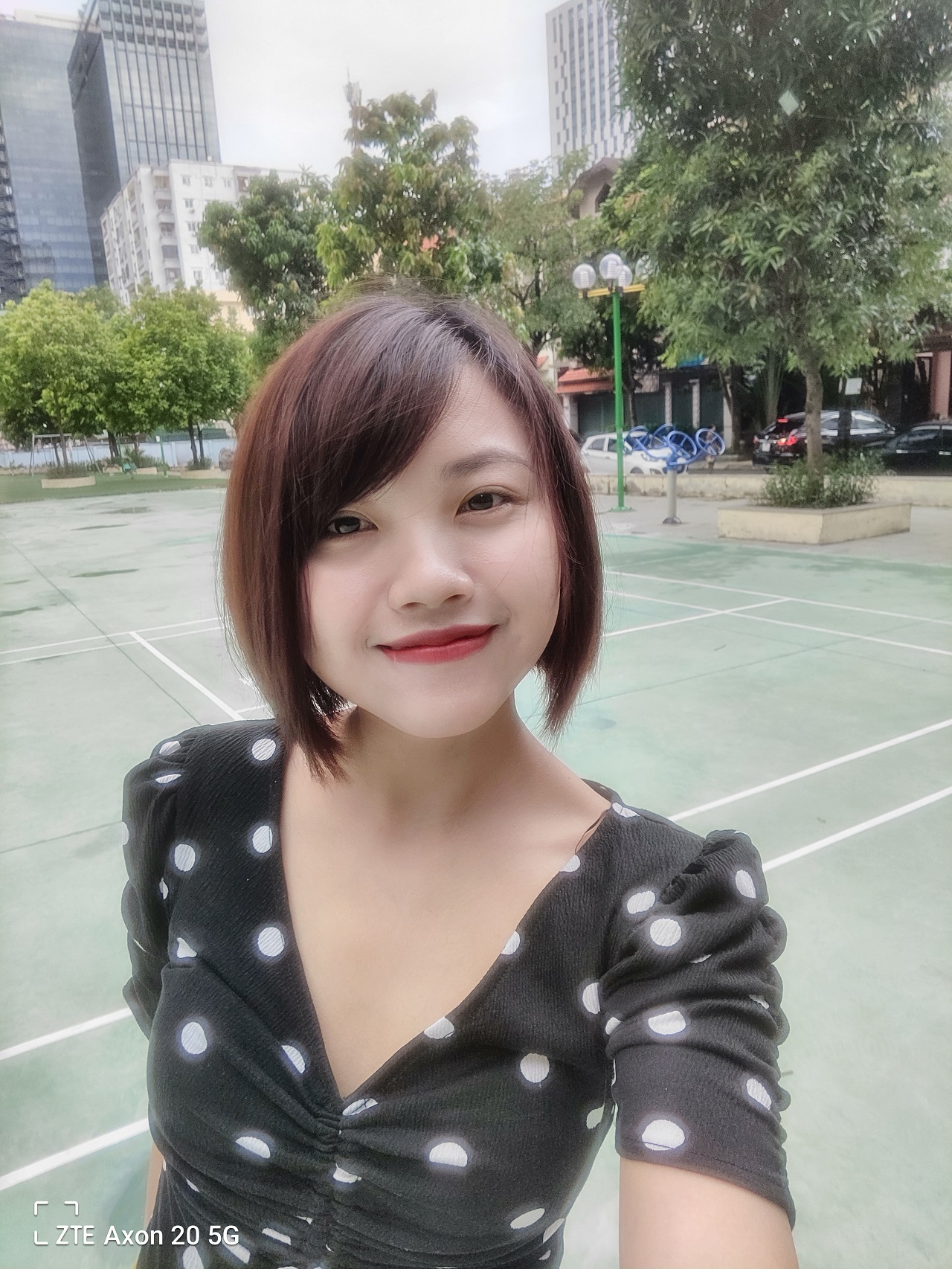 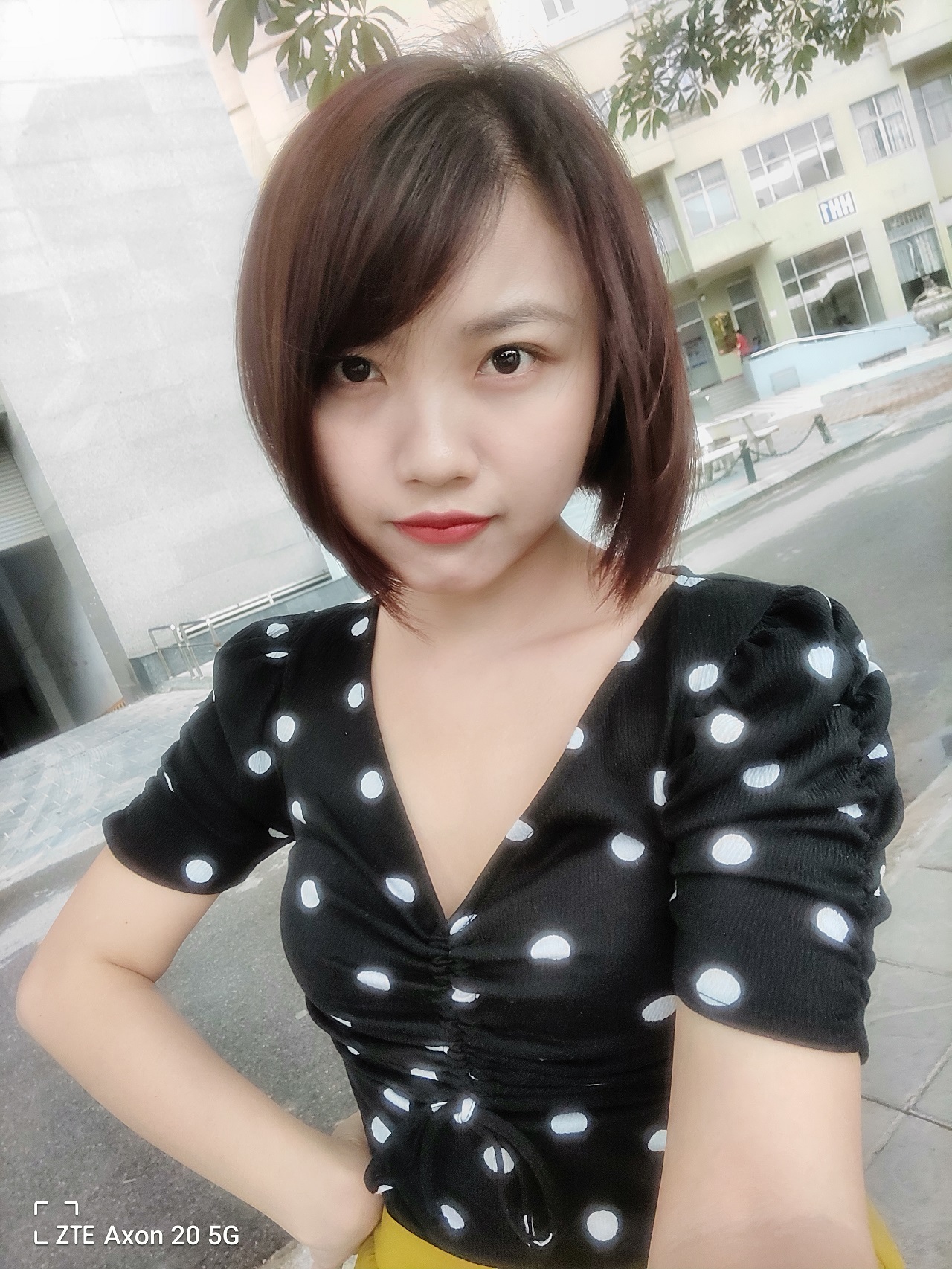 Even in bright enough conditions, the “selfie” and portrait of the ZTE Axon 20 5G are just below average, even inferior to many other smartphones in the current price range of 3 million. The image has poor detail, narrow contrast range, and always exists a mist like professional photographers coating a thin layer of vaseline on the camera filter to increase “blur” for the image. Under normal lighting, that’s clearly something we don’t want. 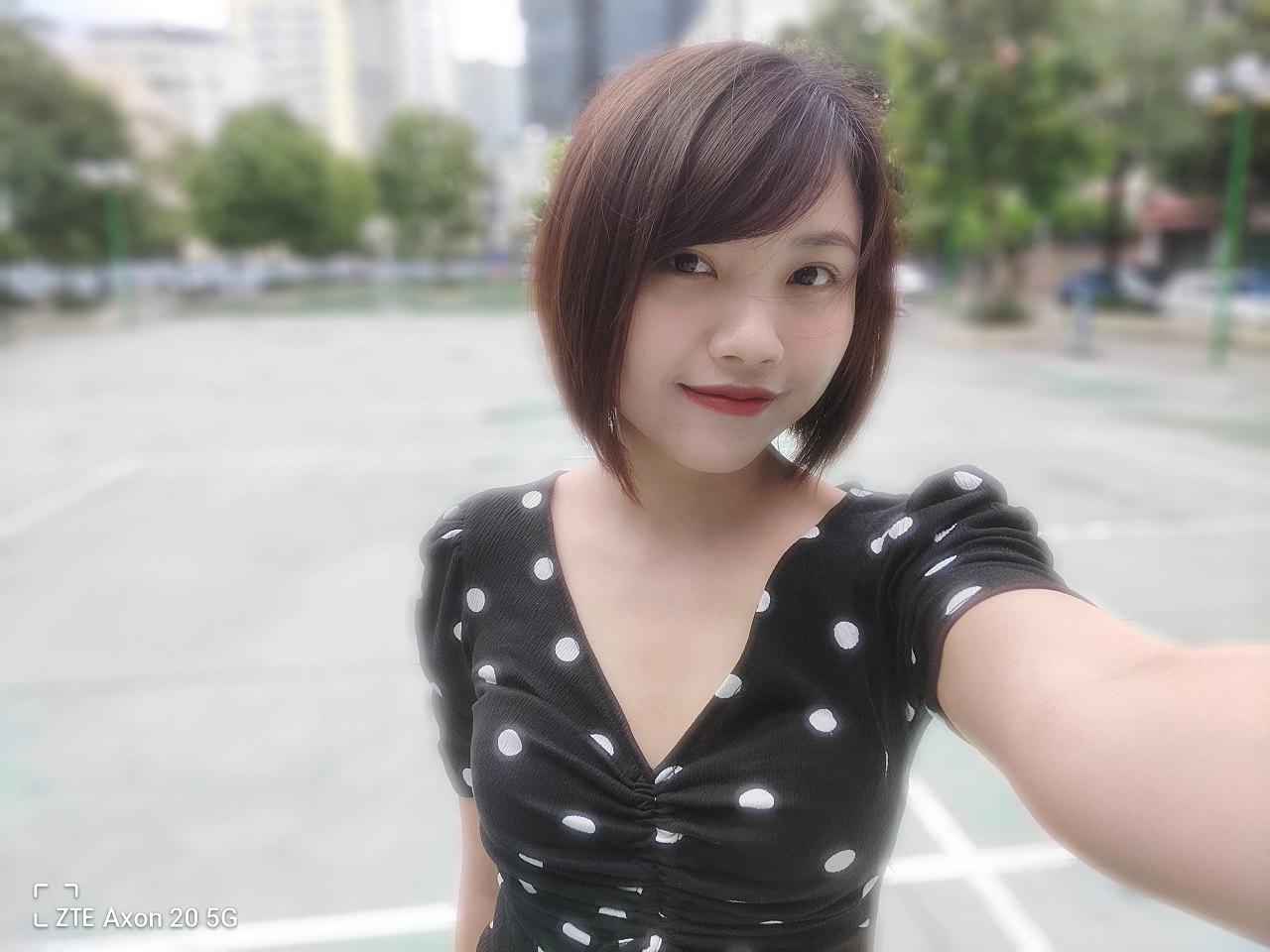 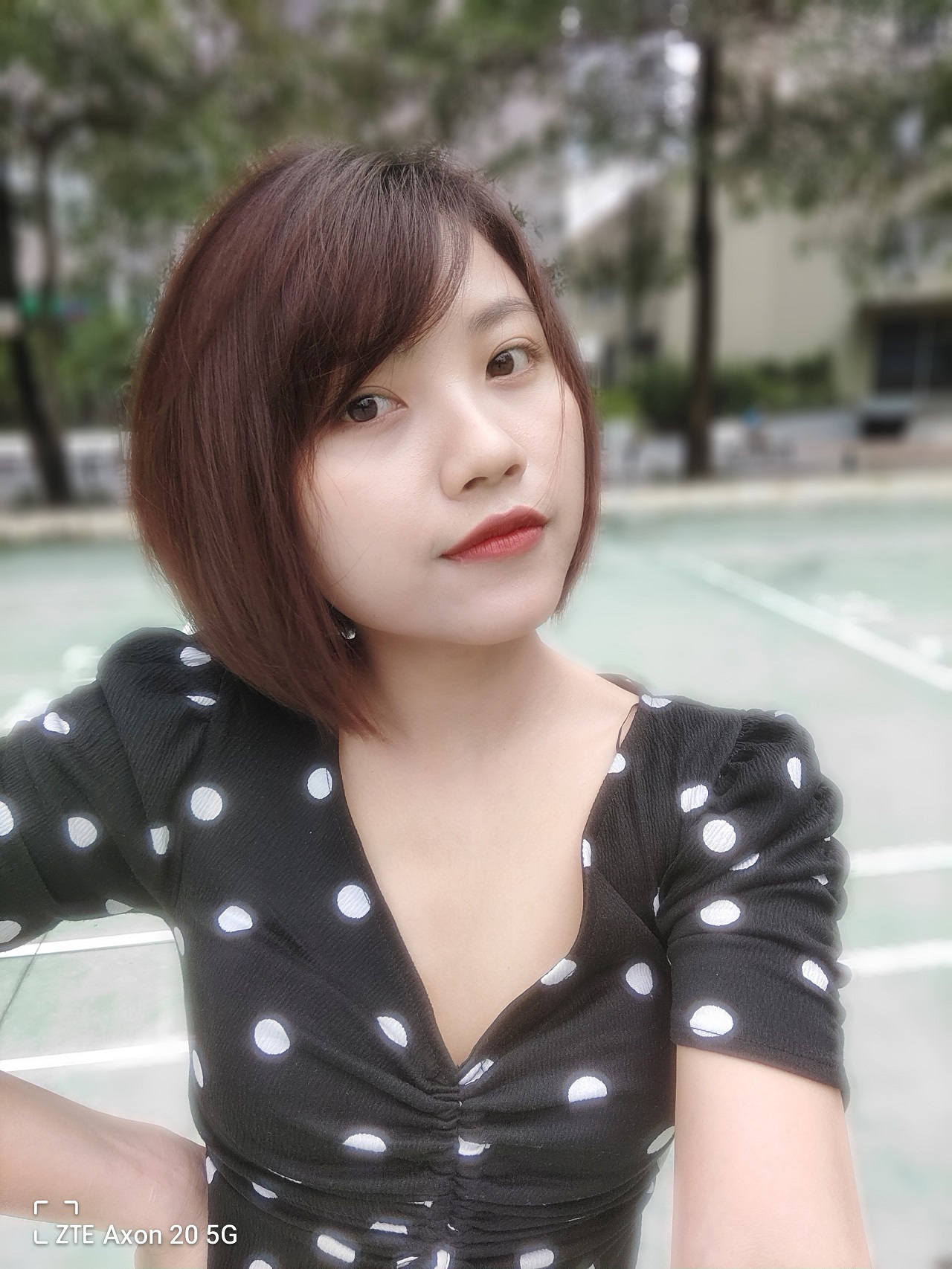 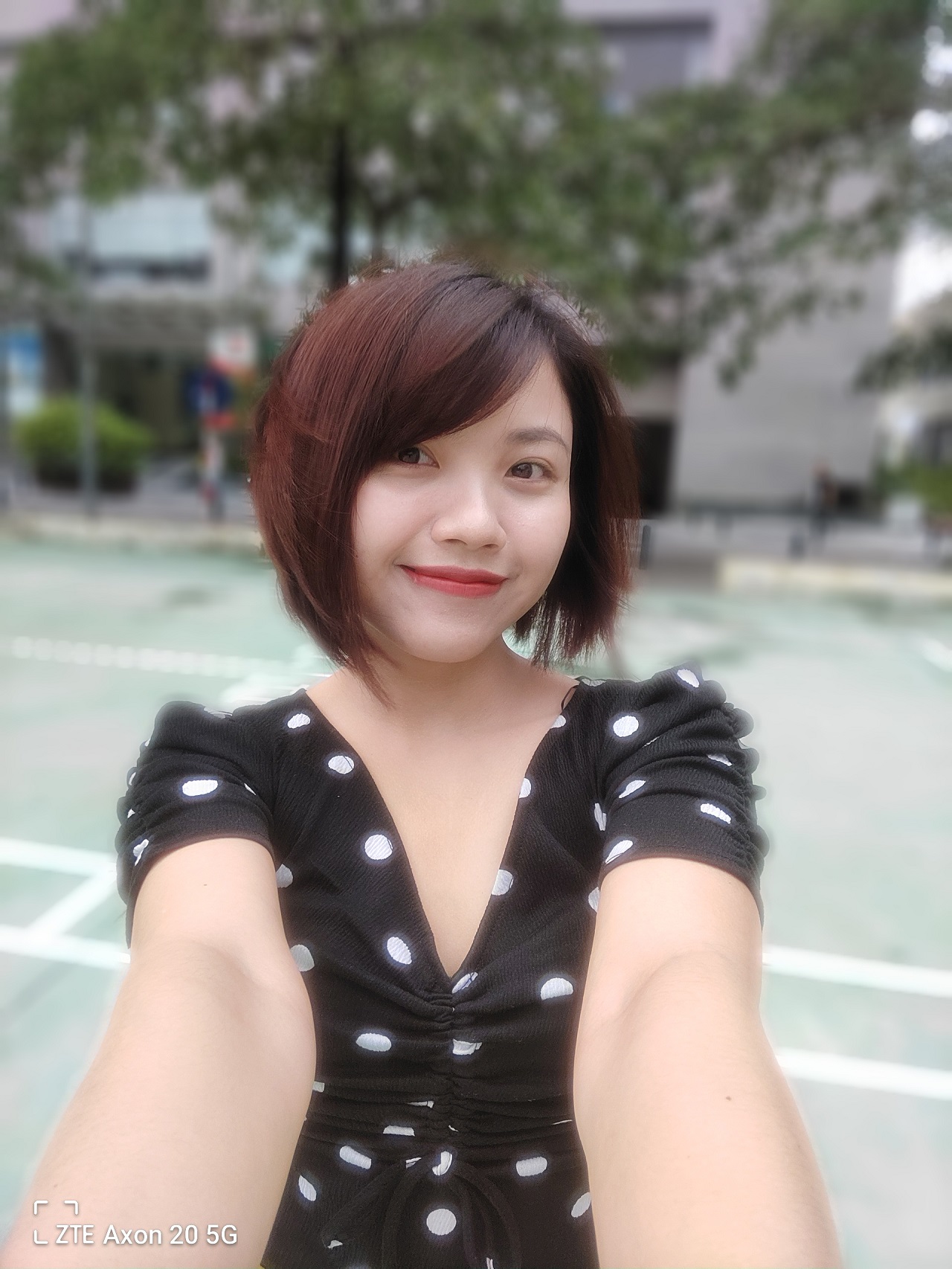 The image of Axon 20 5G’s font removal is also not good, when the image is already blurred, the more blurry the background effect is. The separation between the subject and the background is almost absent, subject borders, areas such as hair, shoulders, … are awkwardly blurred. The reason is obviously due to the lack of light entering the sensor, and perhaps ZTE’s image processing algorithm, unclear whether to use AI or not, is not good. 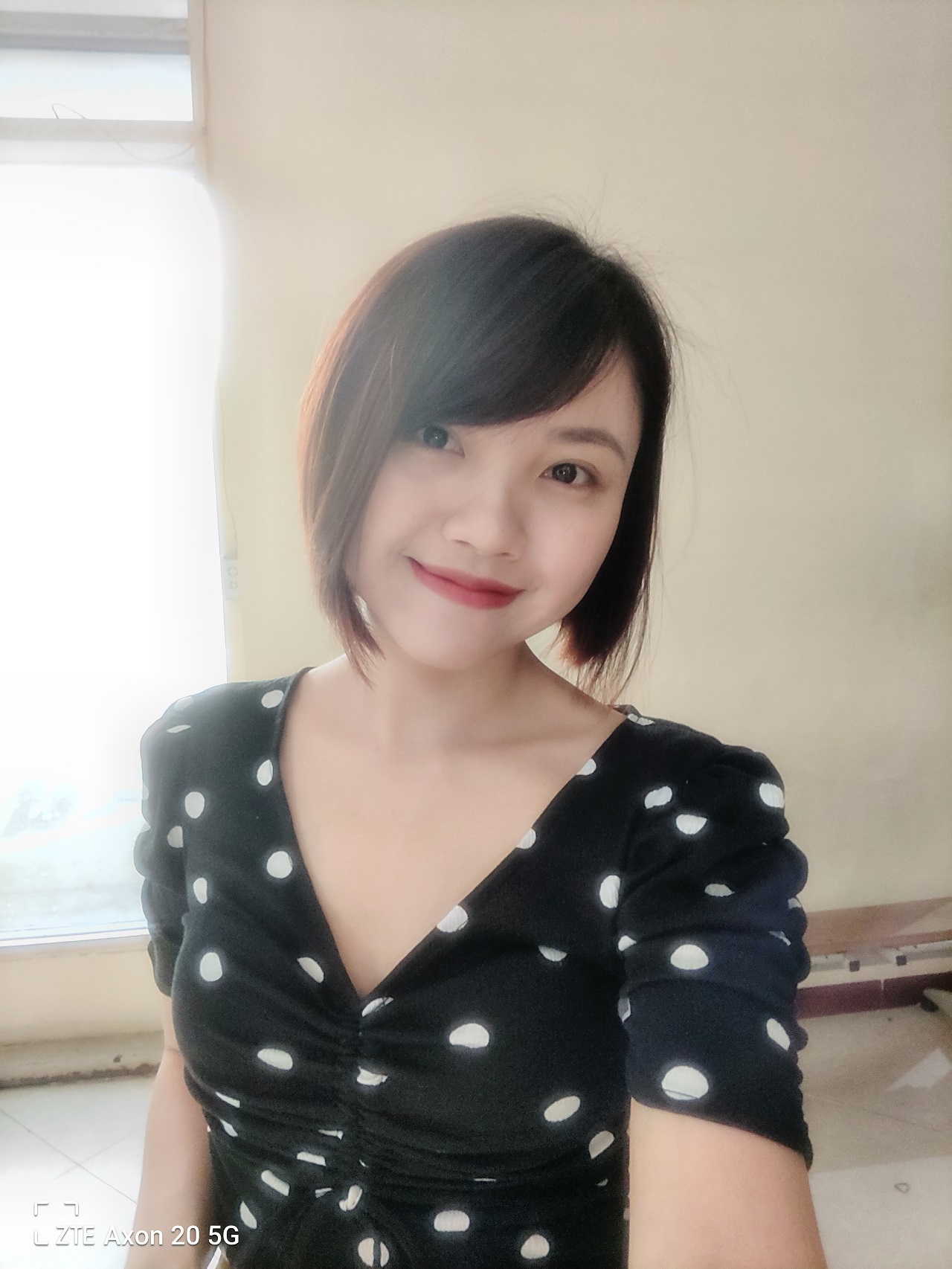 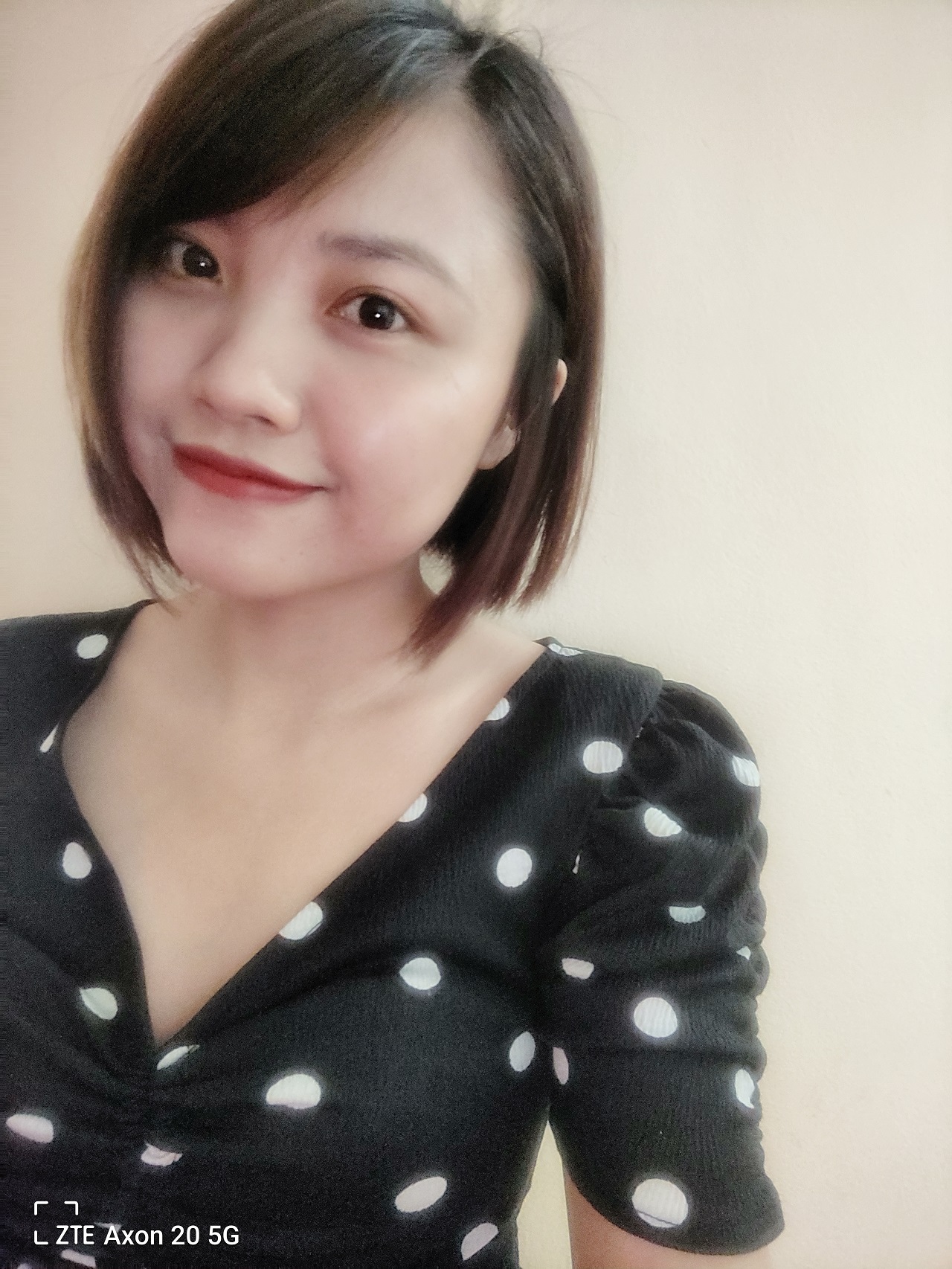 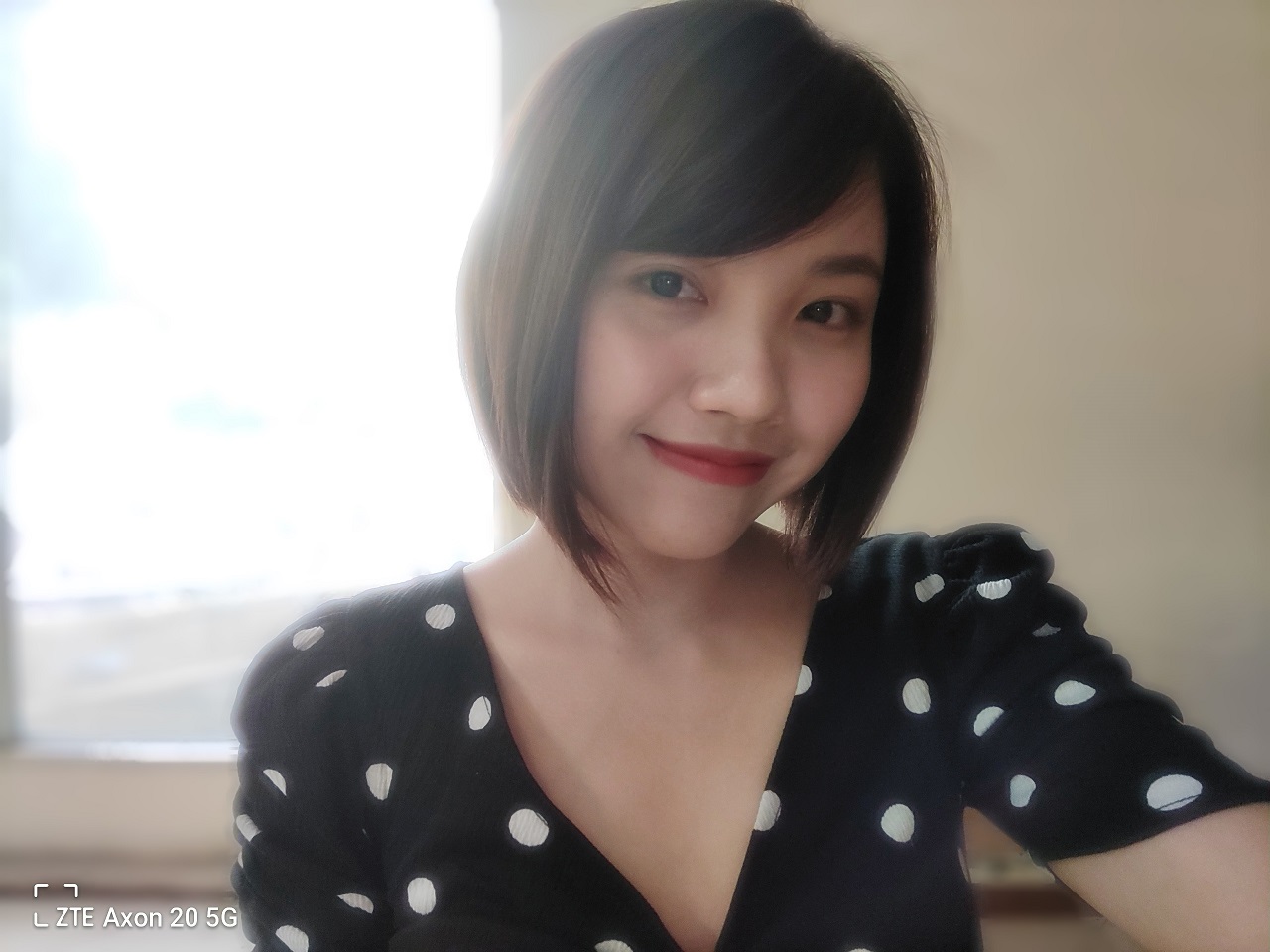 Bright enough already, so I do not expect much on the selfie quality of the Axon 20 5G when there is low light and backlight. Indeed, just standing in the building lobby, there is still quite a lot of light, but Axon 20 5G gives blurry, blurred images, and the edges of the subject appear to be haloes like ghosting effect.

Above, although it’s just the quick experience of VnReview about the selfie camera hidden under the screen of the ZTE Axon 20 5G, but it is more than enough to show us the limitations of this technology, as well as what we There are trade-offs when deciding to invest in a new technology. If possible, VnReview will experience more deeply, give detailed assessments of all that ZTE Axon 20 5G brings, but if you buy this phone simply because the camera technology is hidden under the screen. , don’t.

Chronic hand eczema: a burden for more than 80% of patients

Big factories have entered the female game one after another. What else can they do besides changing clothes and falling in love?

Post Views: 56 Women can hold up half the sky. Judging from the recent ripped topics and hot topics in the game circle, women tend to have a higher and higher presence in the mobile game industry. Manufacturers are more honest about voting with money and product layout. Rise in a dressup, and relied on […]