If you are bored with the scooter models of Honda, Yamaha or Piaggio and want to find a new model, new style, while ensuring convenience and luxury, Peugeot Django will be a worthy choice. worth. Not only unique design, Peugeot Django also gives users the unmixed difference.

It is not exaggerated to say, Peugeot Django Not for the crowd, because this scooter has a lot of differences in itself. The difference not only in the French design is extremely beautiful, but also in the unique color scheme, fashion and even engine explosion is very strange.

With that originality, Peugeot Django Only for those who have delicate taste, liberal and personality.

Design is the strong point of Peugeot Django. Even the most fastidious people, who prefer the most unique, hard to resist the beauty of this French scooter model. 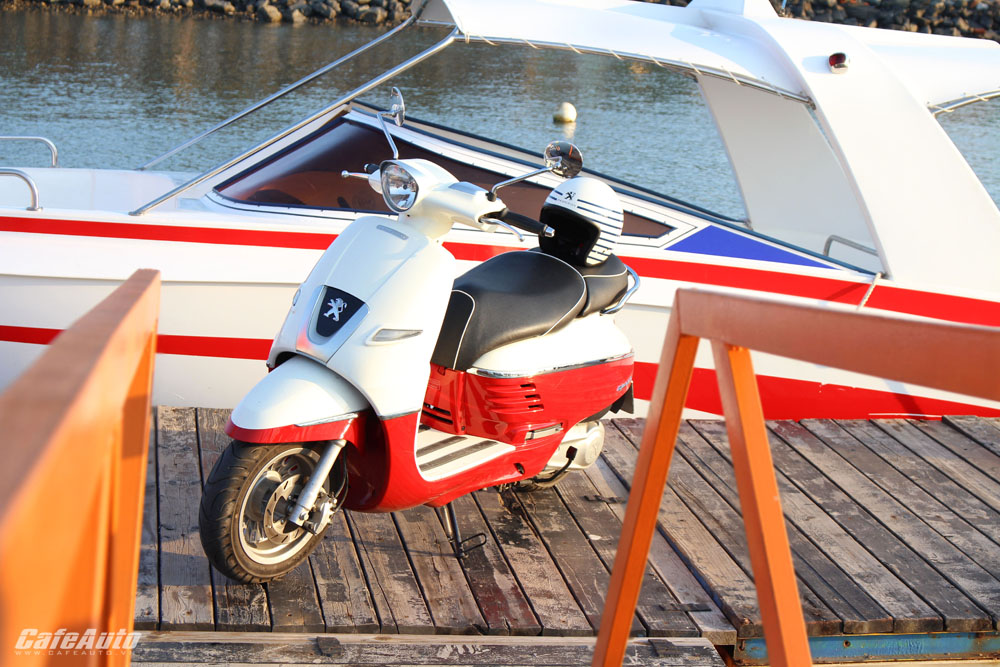 Peugeot Django is inspired by the S57C, a very popular car in Europe in the 1950s.

Django is the combination of classic and modern features. If the details such as the headlights and rearview mirrors are round in the classic style, the symmetrical turn signals arrangement, chrome lion logo surrounded by V-shaped positioning LED in the middle of the car cover It has a very modern style. 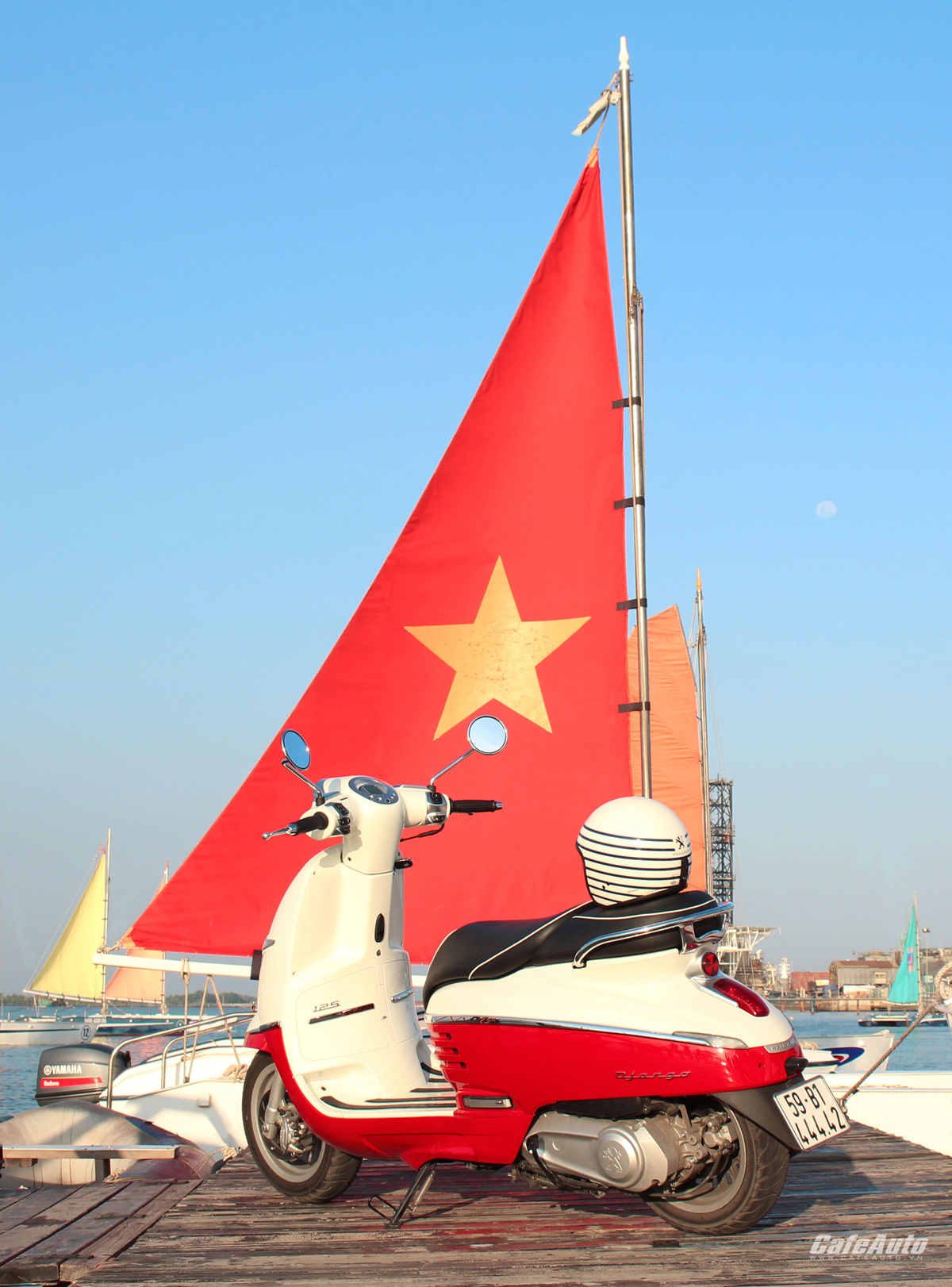 The display cluster is also designed in the above style when a combination of traditional analog clock speed with an electronic screen provides the necessary information, such as time, temperature, number of ki. -lô-meter … The two sides of the steering wheel are familiar function buttons, such as turn signals, horn, adjust the lights … 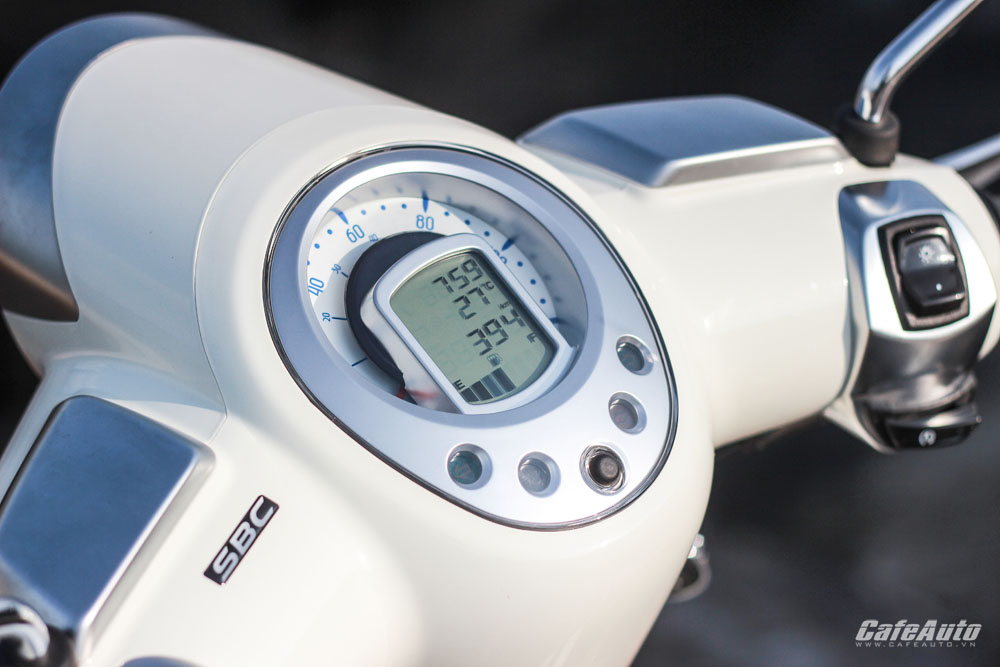 The saddle is divided into 2 separate parts, smooth leather. For the individual writer, Peugeot Django is the model with the best saddle in the scooter models currently on the Vietnamese market. 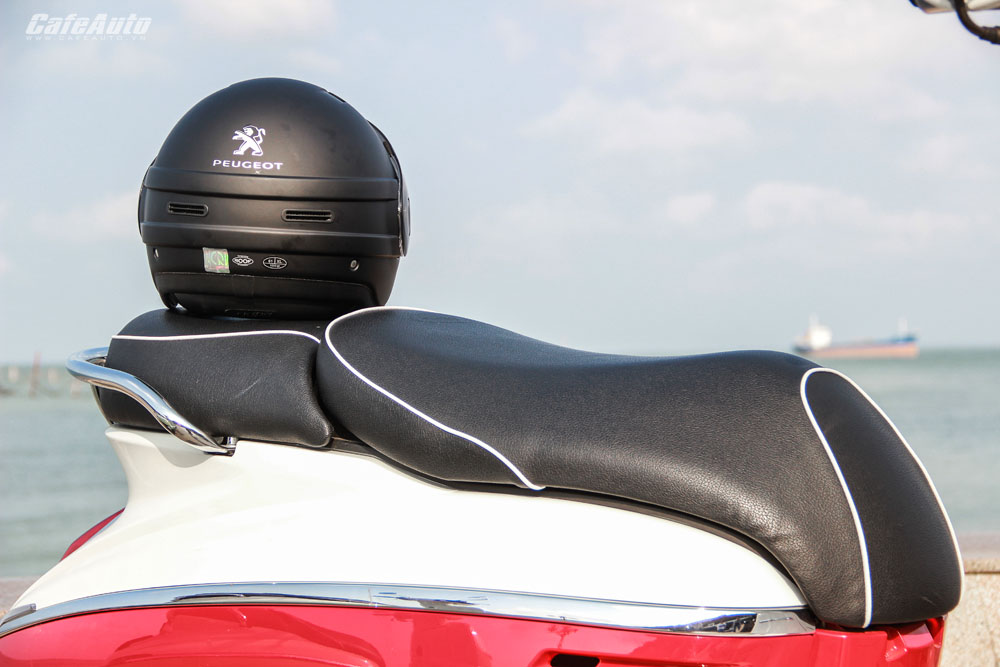 And yet, the unique and fancy color scheme also creates an irresistible attraction for Peugeot Django. Mainstream white is mixed with youthful and modern colors such as orange, red, turquoise, blue, and more neutral colors than brown-black and purple-black. The colors are connected by a chrome horizontal bar that runs throughout the body as a decorative accent. The rear is long and tapered to the rear, combined with classic LED taillights, helping the car to be beautiful from the front to the back. 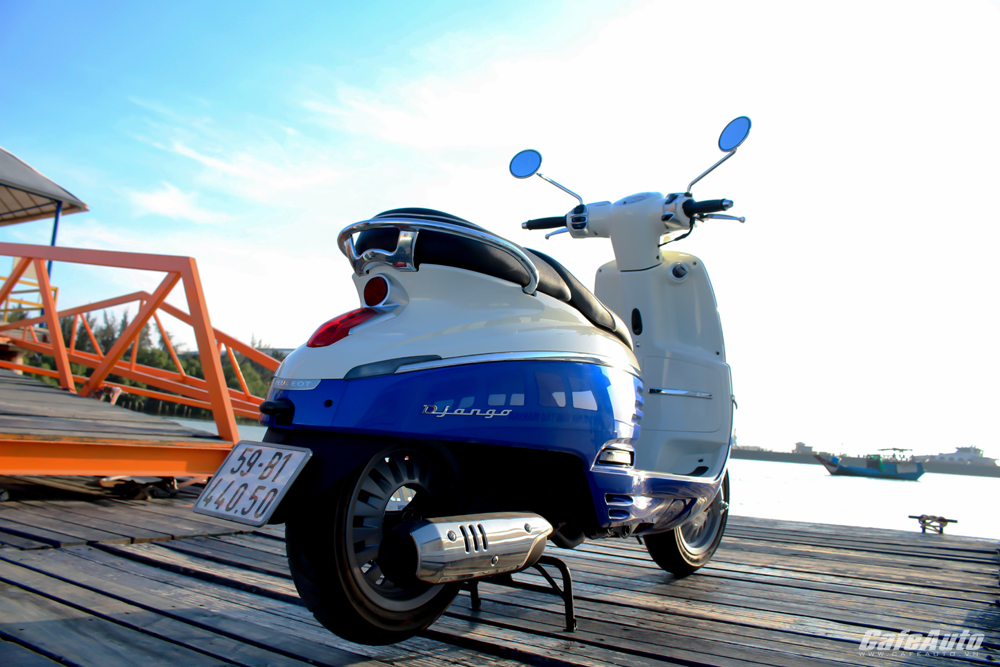 Right below, Peugeot Django has 2 small compartments opened by turning the key to the left or right. On the left is the gas tank lid compartment and on the right is a small storage compartment with a 12V charging port (want to charge, users need to attach an additional adapter). 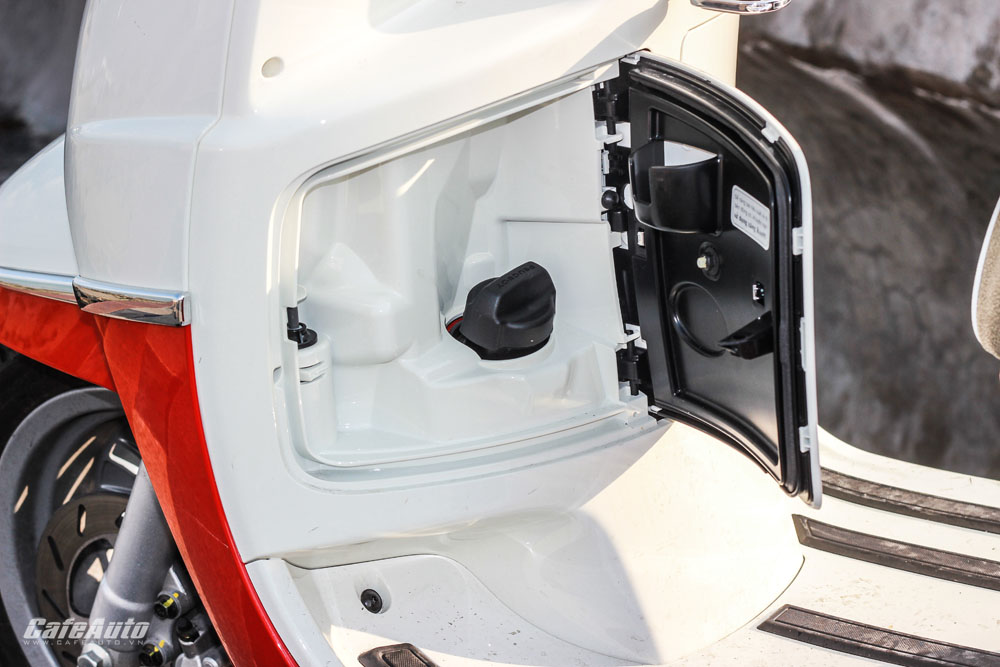 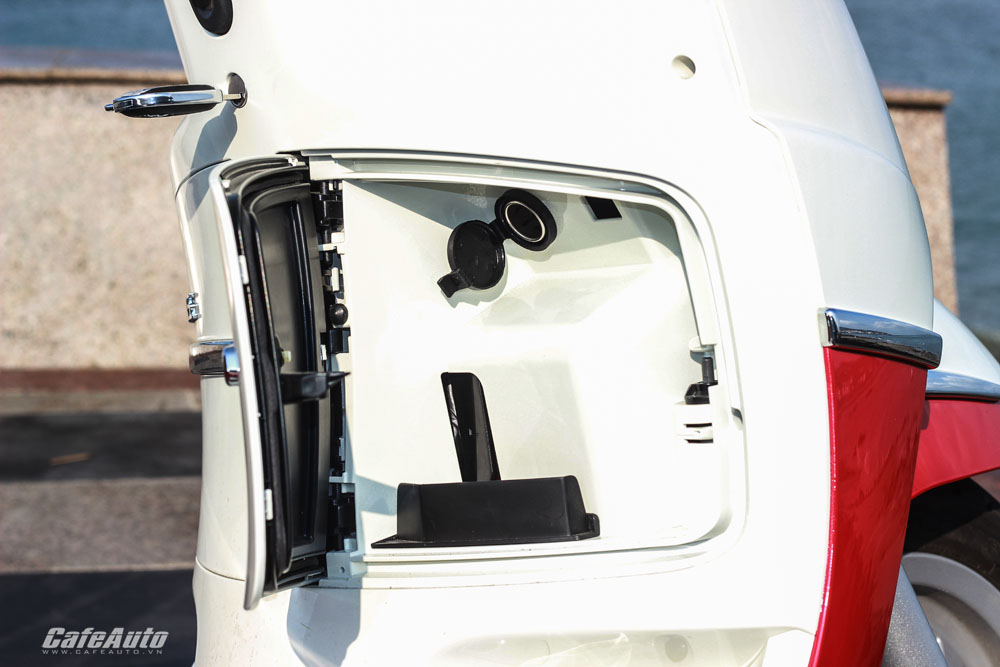 The bottom of the Peugeot Django saddle compartment is smaller than the popular female scooters like Honda Lead or Yamaha Nozza Grande, but is still enough to hold essential items for daily travel.

The question is, is a scooter model for urban use smooth, flexible on a variety of terrain? Experimental journey Peugeot Django chooses the city of Vung Tau, which has all kinds of terrain, such as crowded streets, spacious roads along the coast and steep hills and mountains. 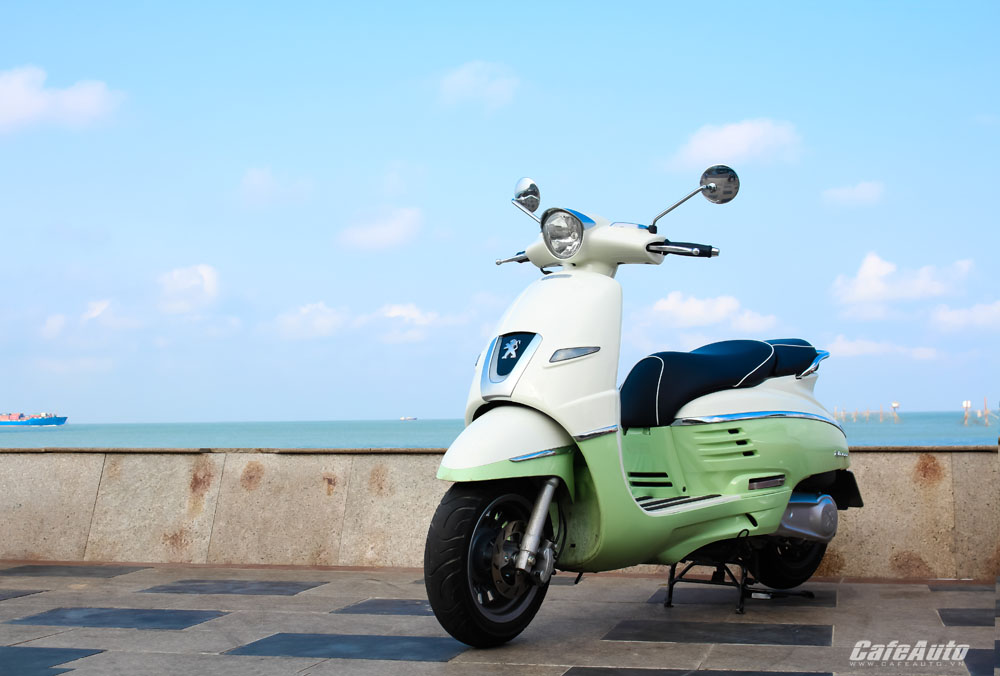 Right after getting on the bus, the feeling that the rider immediately receives is the softness of the leather saddle. Seat height at 770 mm, not too high and suitable for most Asian users. The car provides a comfortable sitting posture with wide legroom, steering wheel is arranged towards the user.

Turn the key and start the engine – a key with a beautiful design, the sound of Peugeot Django engine is quite loud and the explosion sound is very different compared to other cars. According to the explanation from the manufacturer, this is a “deliberate” sound to create characteristics. 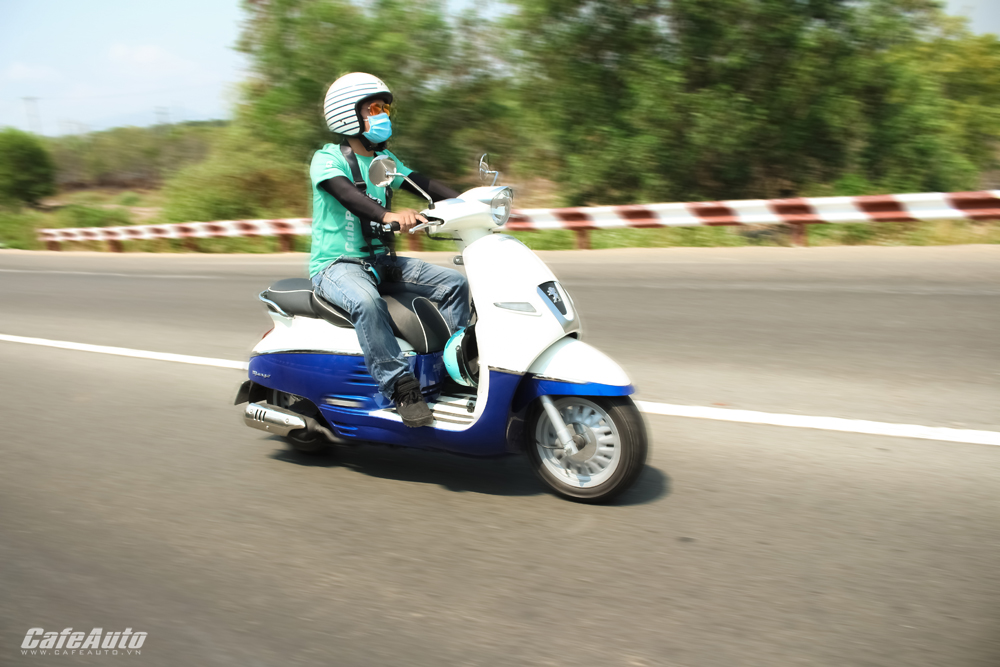 If you love speed, users will be somewhat disappointed in the first station of Django, the car accelerates quite slowly, the throttle lag is relatively much. However, this is quite understandable for a 129 kg car model with a 125cc engine with a capacity of 10.2 horsepower. Moreover, this is a model of a scooter specializing in the street, aimed at female customers who do not pay much attention to the speed, or the engine’s speed, but instead, the fashion design, Eye-catching colors and high usability.

On busy roads, Peugeot Django shows good maneuverability, ability to turn around on narrow roads well. Django is strong when passing the car in front, the engine operates very smoothly, it seems that there is no jam when moving at low speed. 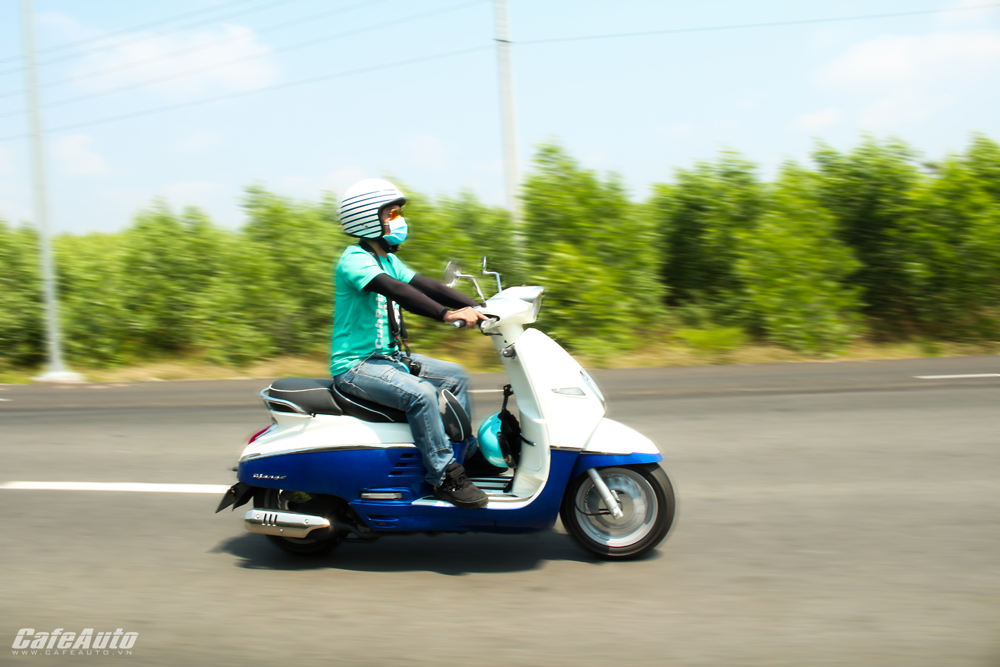 If you have to find a point to criticize Peugeot Django, is the steering wheel layout also European-style, when the handlebar’s distance and the switch knobs are far apart, with the length of the Vietnamese hands will be difficult It is possible to carry out braking, turn signals or honking at the same time.

On straight, coastal roads, the Peugeot Django engine provides better acceleration and acceleration. When reaching a certain speed, Django gives a good jump, at 40 km / h or from 60 – 80 km / h, the throttle is much more sensitive, the car accelerates fast, but the steering is still very compact.

Next is the steep hill test road, winding up to Hai Dang. With 2 adults in the car, Peugeot Django is still capable of bringing the driver to the destination, the motorbike is smooth, the brake system combined with SBC is equipped for both wheels to operate very effectively.

On bad roads with lots of potholes, or going through speed humps, Peugeot Django continues to show the advantage of very smooth shock absorbers. It can be said that this is one of the smoothest scooter models on the market.

Ignoring some small details, such as the weight of the vehicle, the cap of the fuel tank is not really handy and the engine is not too strong, Peugeot Django is considered a good choice for those who are looking for a model. There is fashion style, class brand and very different from the crowd. 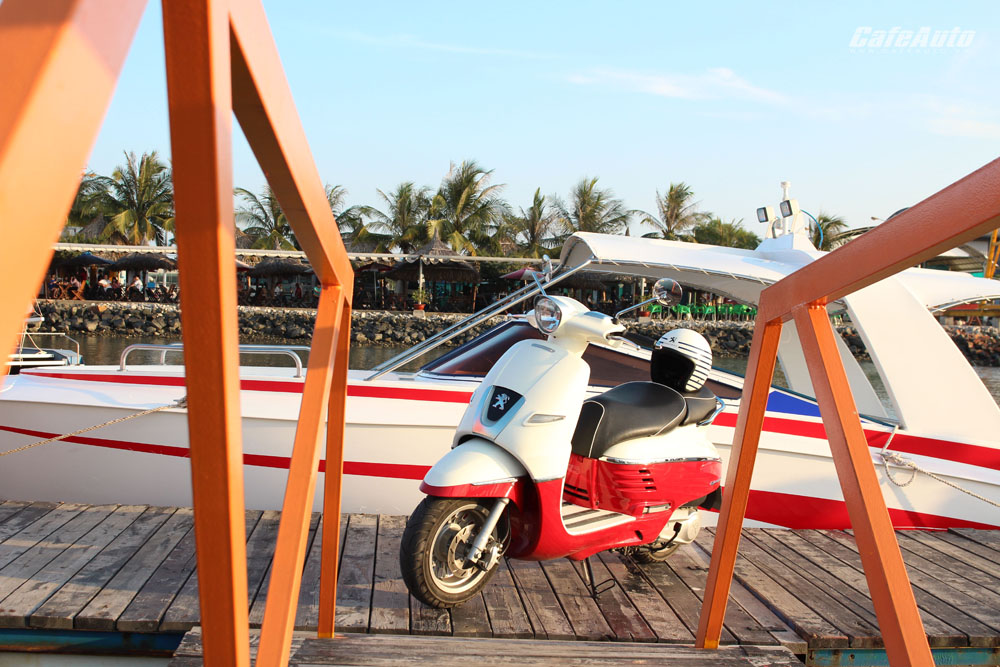 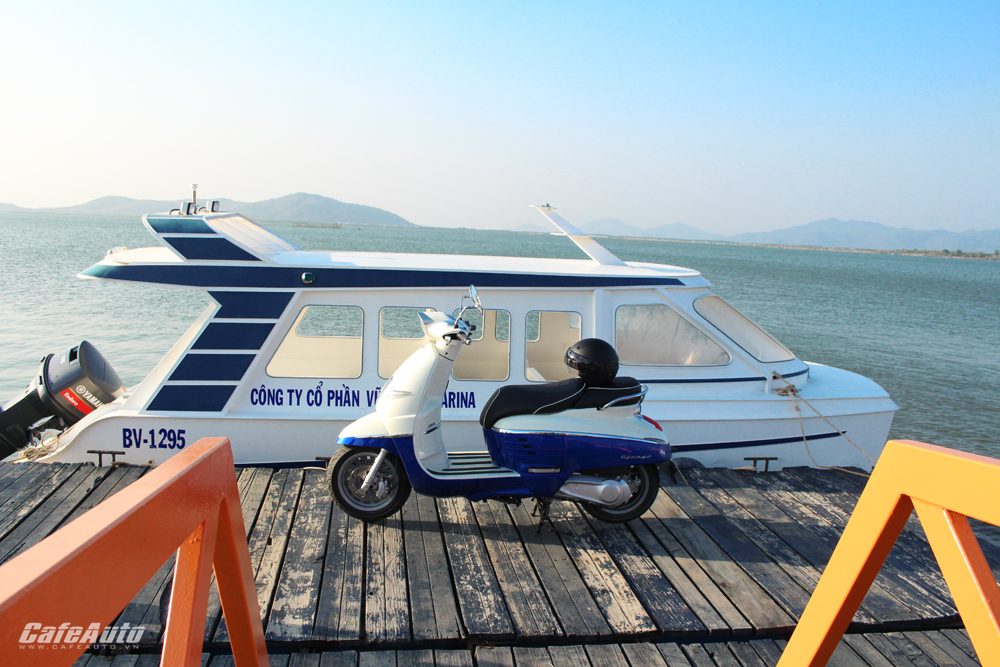 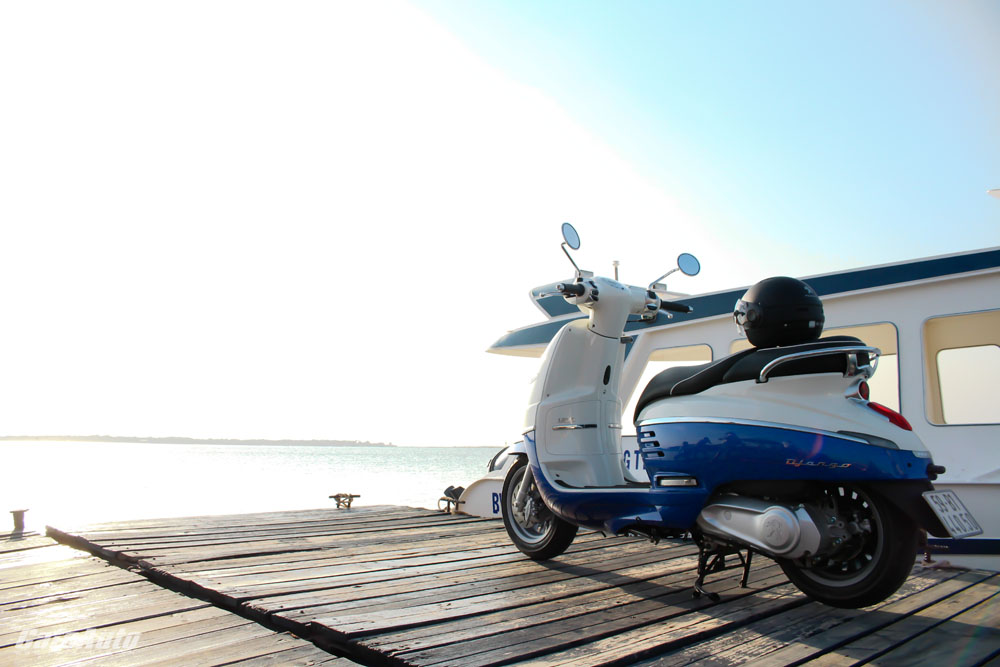 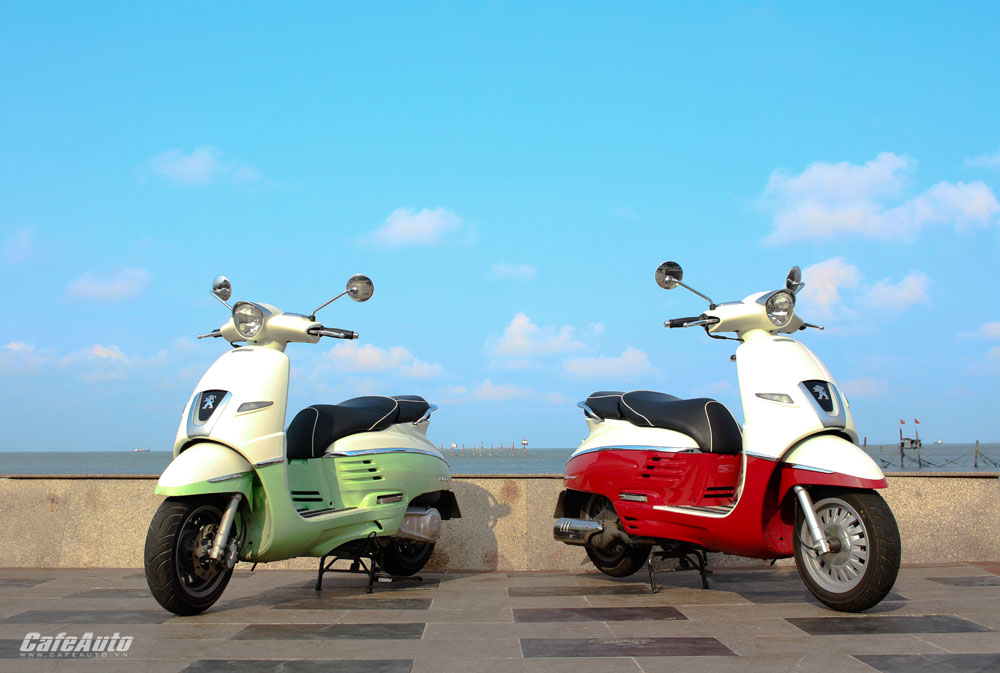 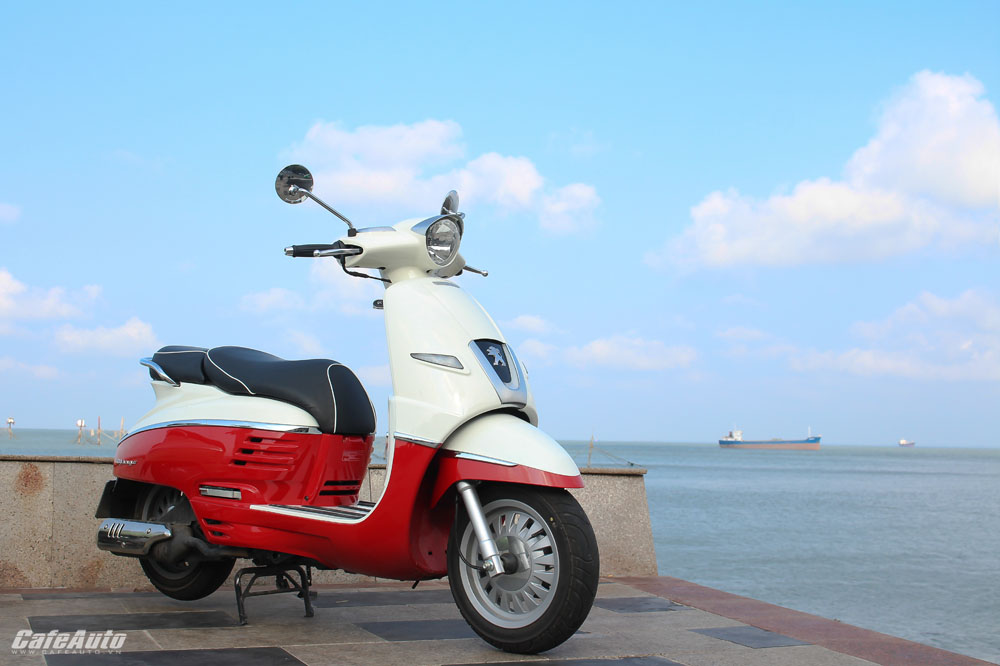 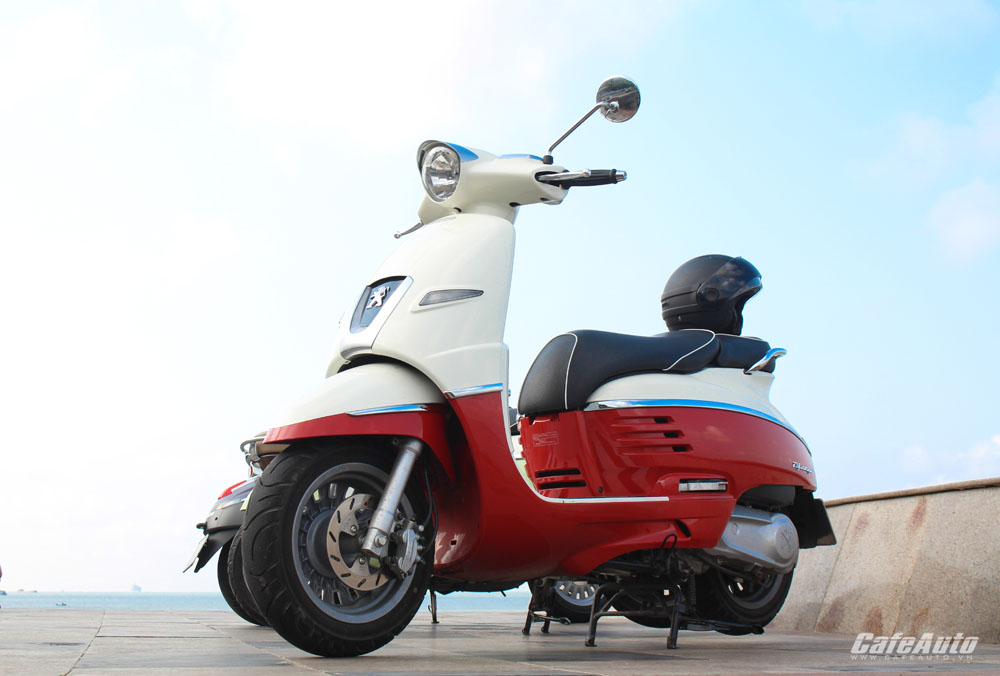 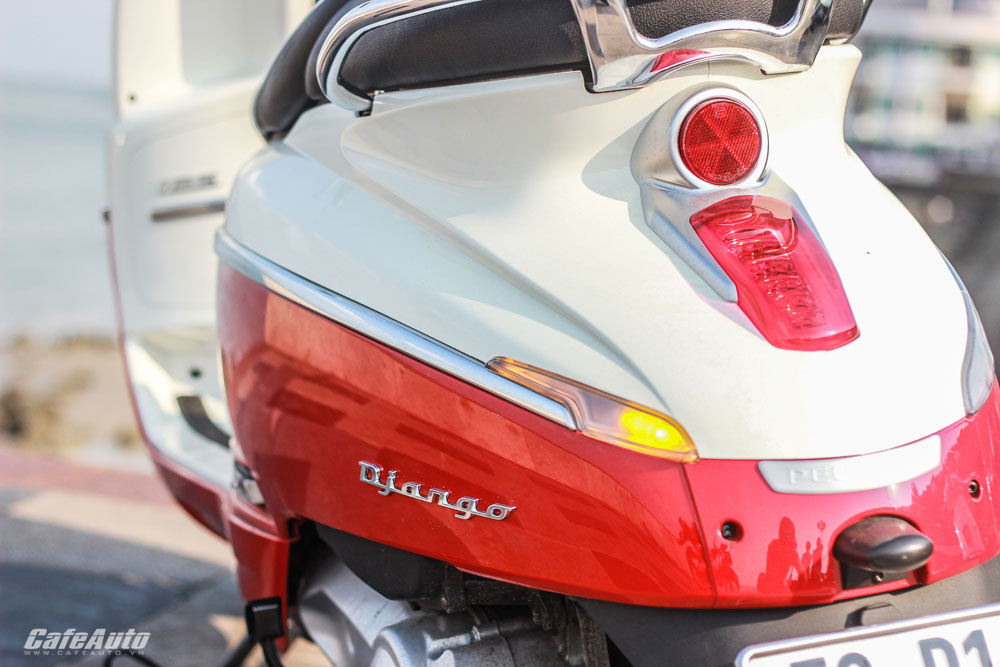 Post Views: 38 Twitter user KurbyS is reporting an issue with their Samsung Galaxy Fold  the letters of the Samsung logo on the hinge have started peeling off. The A and the U are already gone and the rest might soon follow. Those letters have a holographic effect, adding to the visual appeal of […]

Yamaha launched the Avantiz sports scooter at a low price

Post Views: 224 Recently, a new scooter model has been launched by Yamaha in Malaysia market with a youthful and sporty style. It is known that Yamaha Avantiz model in Malaysia is the Soul GT model currently on the market in Indonesia, the model has a selling price of more than 30 million VND in […]

Post Views: 83 Following the Sian FKP 37, Lamborghini recently announced the roadster version of this supercar. True to the nature of a convertible variant, the Sian Roadster generally retains the design style and mechanical background of the Sian FKP 37. With the new design language, the car still shows an angular look, characteristic pit […]