As a high-end phone model, LG Velvet owns a luxurious glass back design with IP68 water resistance standard, a high level of finishing, and also gives people an impressive visual experience with the curved OLED screen. However, not every detail of LG Velvet is at the top of the segment. Specifically, the device is only equipped with Qualcomm 700 series chip. The camera cluster of the device is not too impressive, because the main lens uses a 48MP sensor and lacks a telephoto camera. 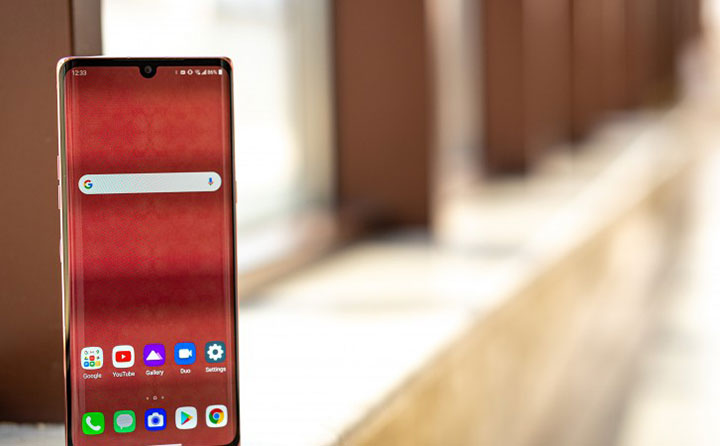 Velvet owns a design language completely different from the high-end models produced by LG before. However, the back of the device is still made of glass, seamlessly paired with the front through a high-grade aluminum frame.

Let’s start with the design analysis of the device with the curved screen on the front. This is a change that makes the biggest difference since LG’s previous models all used flat panels, even for the company’s most expensive product lines.

The curvature of the screen is at a moderate threshold, there is no deep slope like the “waterfall” screens of some other phone companies. Velvet’s screen is encased in a thin bezel, with the top and bottom edges made slightly thicker. These two edges are similar in size, giving the phone a balanced appearance.

LG chose to cut out the screen a small U-shaped array to make room for the selfie camera. The bezel edge of the device is also equipped with a few different details. Which includes a speakerphone strip, capable of taking on the function of an external speaker strip during use. There are also different types of light and proximity sensors.

Velvet’s fingerprint security is optical, located below the screen. In the first times of use, the sensor of the device has a slightly slow fingerprint reading speed and is not fast – a common feature of many types of fingerprint sensors under the screen. However, after a day or two of using the device, the performance of this sensor has improved markedly.

Flip the device over and you’ll see a colorful back. The color version of the model we reviewed is called “Illusion Sunset”. At first glance, the back of the device is pink, until you tilt the phone so that the surface of the phone reflects the light. At this point, you can see the yellow tint hidden under the surface of the machine. 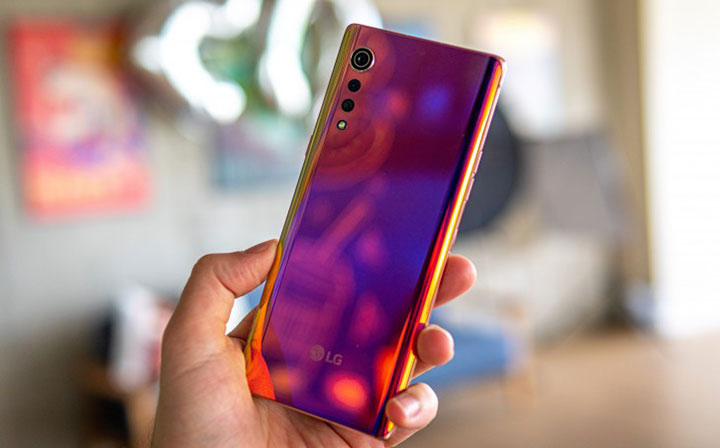 Velvet’s camera cluster also has a completely new design compared to the models it has released before. LG named the design of this camera cluster “Raindrop Camera”. Each lens of the camera cluster is completely isolated, with the largest one at the top and slightly above the body. Two smaller ones are placed in series below, located below the body, and finally an LED flash sensor is located at the end of the lens assembly.

LG Velvet is a long phone thanks to a screen with an aspect ratio of 20.5: 9. For comparison, Velvet has a slightly larger body length than the Galaxy S20+.

Velvet has a similarity compared to other models that LG has released, which is the layout of function buttons. Velvet’s power button is located on the right edge, located about 2 thirds of the length of the body. The device’s volume up and down buttons are located on the opposite left edge, with the button to interact with Google Assistant located directly below. The buttons of the machine are large in size, placed in a moderate position and have a good bounce when pressed.

Switching to the bottom edge of the Velvet, you will see a USB Type-C port and a 3.5mm headphone jack. LG is one of the few phone manufacturers on the market that continues to equip their models with a headphone jack, even for high-end models. 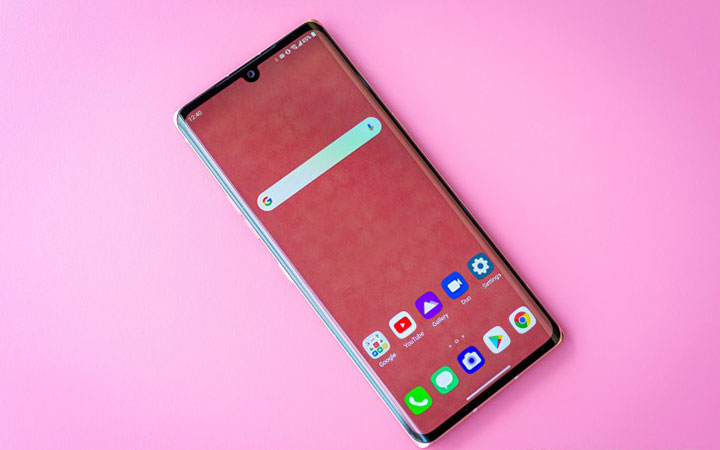 Velvet is equipped with a screen with a diagonal of 6.8 inches, a resolution of 2460 x 1080 pixels, and is divided into a rather strange ratio of 20.5: 9. Velvet’s screen panel has a pixel density of 395 ppi. LG Velvet’s screen lacks an important feature of a high-end phone at the moment, which is the ability to support high refresh rates. Specifically, the screen of the machine is a basic type with a default refresh rate of 60Hz.

During our testing, the Velvet hit the base specs results for an OLED display. In terms of brightness, Velvet averaged 400 nits when adjusted manually, and over 600 nits when used in direct sunlight. 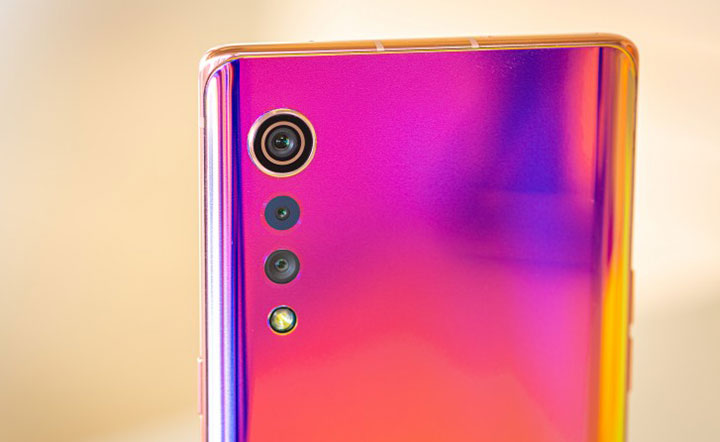 LG Velvet is equipped with a battery with a mid-range capacity of 4300 mAh. Had it been released 1 to 2 years earlier, this battery would have been considered large. However, at the present time, the battery of LG Velvet is only considered medium in comparison to the segment.

During our test, the device can last 16 hours when looping a video and over 12 hours when surfing the web continuously using wifi.

Velvet is built on the Snapdragon 765G chip platform. This is a chip with good performance, manufactured on the 7nm process and has a built-in X52 modem, allowing your phone device to connect to the 5G network. LG’s phone was released with 2 RAM versions of 6 and 8GB, along with a single internal memory version of 128GB.

During actual use, LG Velvet offers a smooth experience, with little lag. 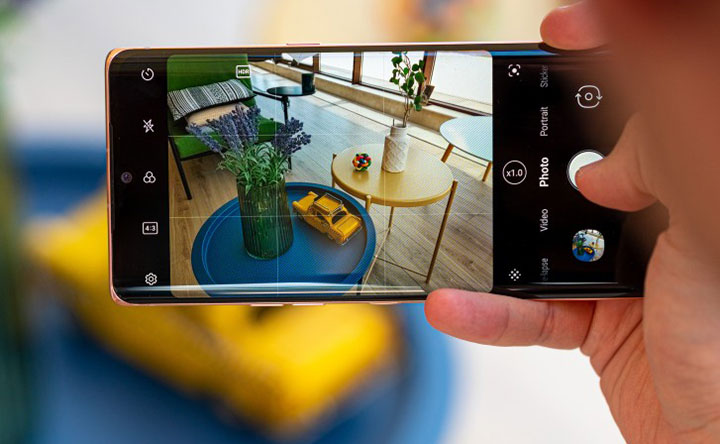 LG Velvet is equipped with a camera cluster of medium quality compared to the price segment. The camera cluster is made up of 3 lenses, with 2 of them capable of taking pictures – including a 48MP main camera and an 8MP super wide-angle camera, along with a 5MP depth sensor.

The main camera uses a Samsung 48MP TetraCell sensor, capable of taking pictures at 12MP resolution by default through pixel binning technology. The lens in front of this sensor is 26mm and has an aperture of f/1.8. The camera has phased autofocus and does not support optical image stabilization.

Velvet’s super wide-angle camera uses a sensor with a modest configuration, with 8MP resolution, combined with an f/2.2 aperture lens, 15mm focal length. This camera does not support autofocus. And finally, the depth-sensing sensor of the device is a 5MP type, using an f/2.4 aperture lens.

To take selfies, the device uses a 16MP camera with a lens with a fairly long focal length of 29mm, aperture f/1.9. This camera also does not support the autofocus feature.

Velvet’s main camera has quite good overall image quality. The colors of the pictures are reproduced brilliantly and have good control, without being overdone. The images taken with this lens have clear contrast.

LG has decided to move in a different direction with this year’s high-end series. Removing cumbersome details and branding on the body, Velvet is launched on the market with a very modern and personality design language.

However, if you need a device equipped with the latest and most modern components, or a machine capable of taking top-notch photos in the segment, then Velvet may not satisfy you. However, if what you need in a phone is an eye-catching design language, and don’t want to spend a lot of money on a flagship device, then LG Velvet will be a good choice.