THE otitis, ear infection and inflammation, is a common disease in children and the second most frequent infectious disease in the world, behind pharyngitis. Otitis may affect one or both ears in isolation or accompanied by another disease, such as pharyngitis or angina. 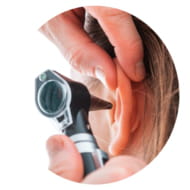 Otitis, most of the time, is caused by bacterial infections. The most common bacteria are Streptococcus pneumoniae and Haemophilus influenzae. On the other hand, it is also possible that otitis is caused by viral infections.

Usually, the main sign of otitis is the presence of runny nose and other signs of a cold. As a result, ear pain begins and, in young children, can become unbearable. In more serious cases, it is possible to verify partial and temporary hearing loss in the affected ear and formation of pus and bleeding in the ear. Fatigue, fever, headaches and throat and difficulty sleeping can also accompany otitis.

First, give pain remedies for the child. Babies and very young children suffer a lot from the pain of ear infections. Also, avoid lying the child on the side of the affected ear, as this worsens the infection. It is also important to keep your child’s nose clean and avoid smoking at home during the days of infection. See a doctor to recommend the most appropriate drug treatment for the problem.

There are several homemade methods for treating otitis. The most common is conducting warm water compresses, which should be done for 20 minutes two or three times a day. In addition, it is also possible to soak cotton in a mixture of olive oil and garlic. To do this, fry two garlic cloves in two tablespoons of olive oil and soak the cotton in the product.

Cotton swabs can be the biggest villains of ear infections as using this product to clean the ear can cause drilling on site, initiating the infectious process. It is also important to avoid exposure to noise and loud music and allergens, such as dust and pollen. As a preventive measure, teach your child the best way to blow their nose, covering one nostril at a time to allow ventilation of the tube that connects the nasal cavity to the ears.

The biggest challenge in otitis in babies is the diagnosis of the disease as the child cannot communicate what he is feeling. It is therefore necessary for parents to be alert to signs of otitis, such as cold for many days accompanied by fever, difficulty swallowing and food rejection and, finally, constantly touch one ear.