Osomatsu-san has almost invariably fared well when it’s gone “serious” for an entire episode.  The thing is that this season, the overall tone has been more tilted in that direction to the point where an ep like this one feels almost normal.  So some of the impact may have been lost, but I think it still worked very well.  What’s more, this ep was centered around the brother who’s (to me at least) unquestionably the least likeable and most uninteresting, Osomatsu.  All the sextuplets have their hook, but his is basically that he’s a dribbling asshole.  Entertainment-wise that only gets you so far. 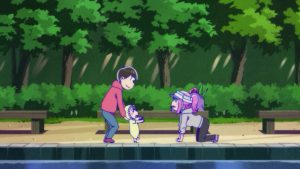 I think this episode manages to do the almost impossible, which is to make Osomatsu a sympathetic character.  The magic formula is simple – make it about Osomatsu, but have very little of him actually in it.  He’s one of those guys who looks better the less you see (and hear) him, and the real focus of this episode is Hashimoto Nyaa, Totoko’s idol foil-friend (froil?) with the baby.  And on the rest of the cast, who desperately try to convince her that dating Osomatsu-san would be a huge mistake.  Osomatsu is just the MacGuffin. 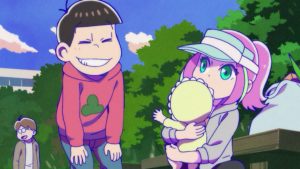 There’s a B-part to this story, which sees Choromatsu – Nyaa’s loyal and dedicated fan – become so despondent that Nyaa chooses Osomatsu over him (and doesn’t even know who he is) that he goes on a journey of the soul.  This is definitely the more comic side of the episode, with Choro heading from India to an Egyptian prison to the jungle and Buddhist enlightenment, freaking out every time he sees a cat.  He gets a happy ending of sorts, but the same certainly can’t be said of his eldest brother. 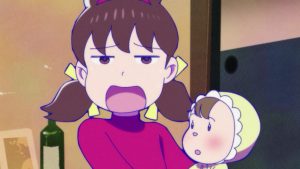 The basic joke here is that Nyaa is in love with Osomatsu for no logical reason, and the more everyone tries to convince her otherwise the more determined she becomes.  Does this kind of thing happen in real life?  Obviously, yes.  Unable to make much headway on her own Totoko calls in the cavalry, and Osomatsu’s brothers are only too happy to throw him under the bus and back it over him.  The thing is of course they’re right – he’s an unbelievably selfish and shiftless wretch who really would be a terrible match for almost anyone.  But Nyaa just digs in deeper, and only her mother (or whoever that obaba is) seems to understand why. 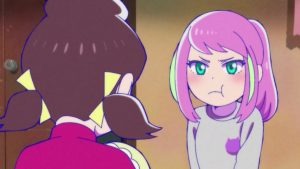 Eventually the boys (well, Totty) figure out that the only way to cure Nyaa is to have her witness the full Osomonty – have him make an ass of himself in person and show her his true worth.  Which he does, showing up two hours late for their izakaya group date (which he chose the time for) because he was playing pachinko.  Again, the more of a drunken wretch he acts the more smitten she acts, and eventually he jokingly asks her if she wants to go on a date – and to his surprise, she says yes. 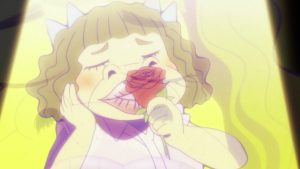 This is where things get really sad, because Osomatsu is such a blowhard and a coward that he going into full panic mode.  He hides under the couch (the bit with Jyuushimatsu and the whispering was the funniest part of the ep), he begs someone to impersonate him and go on the date.  But the real tragedy here is after a night of soul searching he decides to man up and go through with it – only to discover that after her own, Nyaa has wised up and realized what a mistake this would be. 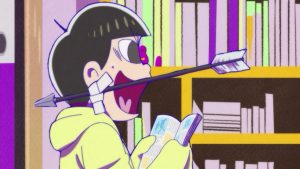 There’s a certain bait-and-switch element to this series, I admit – every time you think “this is when it’s really going to play it straight”, it pulls something like this.  I don’t find an ending like this especially satisfying, because it’s played for comedy and frankly, after an episode like that the ending shouldn’t have been played for comedy.  But the fact that it’s Osomatsu-san to the core makes me think there’s a certain genius in the way this show can play with our perceptions the way it does and keep us coming back for more.