Way back when the second season of Osomatsu-san ended, I speculated that might be it, at least as far as TV was concerned.  It’s not that the franchise wasn’t still popular (it certainly was), but I sensed that director Fujita Youichi and writer Matsubara Shuu’s hearts weren’t really in it.  The big screen film I predicted did come to pass, but I was a little surprised when the announcement of a third TV season came along.  Money talks from the production committee side, of course, so it was a no-brainer there.  But would the creators – who bear the weight of creating a totally original comedy from scratch and meeting bloated expectations – have anything compelling to say? 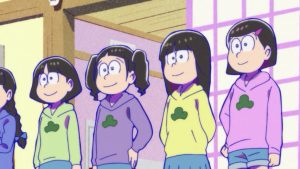 I hope so, because I still have serious affection for this show.  It has no third rails, a fabulous supporting cast, and can be one of the smartest anime around when it wants to be.  And the third season premiere was certainly encouraging, because it was fearless and frequently hilarious, which is what Osomatsu-san needs to be to be at its best.  Of course premieres and finales are tailor made for a show like this, with its sustained demolition of the fourth wall and relentlessly self-referential POV.  The tricky part, as always, will be what comes in the middle. 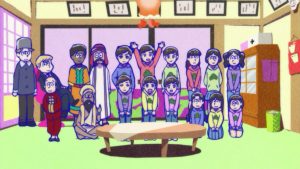 The hook this time is that the boys have been replaced.  Too dirty, too lazy, too controversial.  What the world wants now, Iyami assures us, is “COMPLIANCE!”  The fact that this is said before a production committee consisting of the SEELE monoliths from Evangelion (like I said on the podcast, its influence hasn’t waned one iota) is one of those third rails where anime isn’t supposed to go, biting the hand that feeds it.  Of course that hand is also slowly throttling the life out of it, but Osomatsu-san is probably the only series with enough “don’t give a fuck” to openly call a spade a spade. 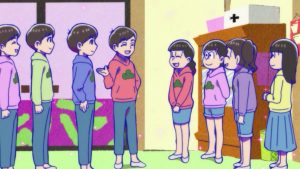 The replacements are a goody-goody sextet (who turn out to be cokeheads, drug use being more unforgivable than murder in Japan by some measures), a “gender balanced” team of O-she-matsus, and an international six.  None are identical or even sextuplets, but that’s not really the point.  The boys are called before said production committee, where the funniest part of the episode takes place when their seiyuu pay them a visit.  This is the sort of self-referential humor I love, and this was the biggest laugh of the season so far for me.  Especially when “Murakami Kouji” showed up to meet Todomatsu, who sputters “Where the hell is Miyu!?” 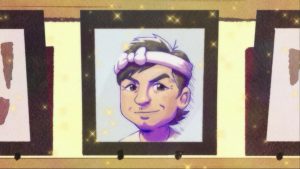 After this, the boys are sent to the “Anime Character Rebirth Factory”, where the likes of Dekapan and Hatabou are given very minor makeovers, and Dayon comes out completely unchanged.  The boys, unfortunately for them, are transformed into giant pieces of shit.  This wasn’t the best gag of the episode for me if I’m honest – it was too broad and went on for too long.  But eventually the production committee allows the sextuplets to return to their human forms as long as they have nothing to do with the third season. 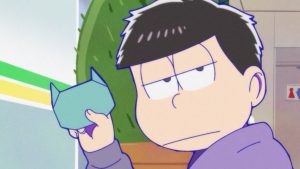 The other great joke in the premiere comes when the original six – now basically hobos – crash the premiere party for the new eighteen and we get a hilarious Kimetsu no Yaiba reference.  It’s all very funny, no question.  Again though, this sort of transition ep is almost a free hit for Matsubara and Yoichi as long as they don’t lose their nerve (which I doubt will ever happen).  Now the heavy lifting begins, and we’ll see just how committed those two (especially Matsubara) are to making this season one to rival the first in quality.

Post Views: 18 This is probably as close to a conventional episode as Hyouge Mono gets.  And that says something about how unconventional this series is, because it’s still some very esoteric stuff.  Nevertheless this is more or less a straightforward political and military sequence, as the narrative butts up against some very important events […]

Kyoshin to Hyouka no Shiro is back on air after a delay due to the Covid-19 translation!

Post Views: 136 On Saturday, TriF Studio released the first episode of Sae Okamoto’s Kyoshin to Hyouka no Shiro (Shiro, the Giant, and the Castle of Ice) anime after being delayed from May due to the effects of the pandemic. Covid-19. The remaining three episodes will be aired from the fall to the end of […]