We put the OnePlus 8T through our comprehensive Battery test protocol and will present the most important results of our tests in this review.

The OnePlus 8T showed excellent performance in our charging tests, going from a completely empty to a completely full battery in under 40 minutes, thanks to its fast 65W charger, which also brought it high marks in our 5-minute quick boost tests. However, its global battery performance was undercut by somewhat limited autonomy, with battery life lasting a bit less than two days under average conditions. As for specific use case comparisons, it did well when making phone calls and when streaming video, but did quite poorly when streaming music.

We compared the OnePlus 8T’s performance in several key categories with two other high-end devices, the Xiaomi Mi 10T Pro 5G and the Oppo Find X3 Lite; battery capacity, charger, display type and resolution, and processor specifications for all three devices are shown in the table below.

Worth a mention is that while its battery linearity is not quite “what you see is what you get” (as with the Oppo Find X3 Lite), the OnePlus 8T’s battery indicator is fairly accurate, as its power doesn’t drop precipitously from 20% on down as it does on the Xiaomi Mi 10T Pro. 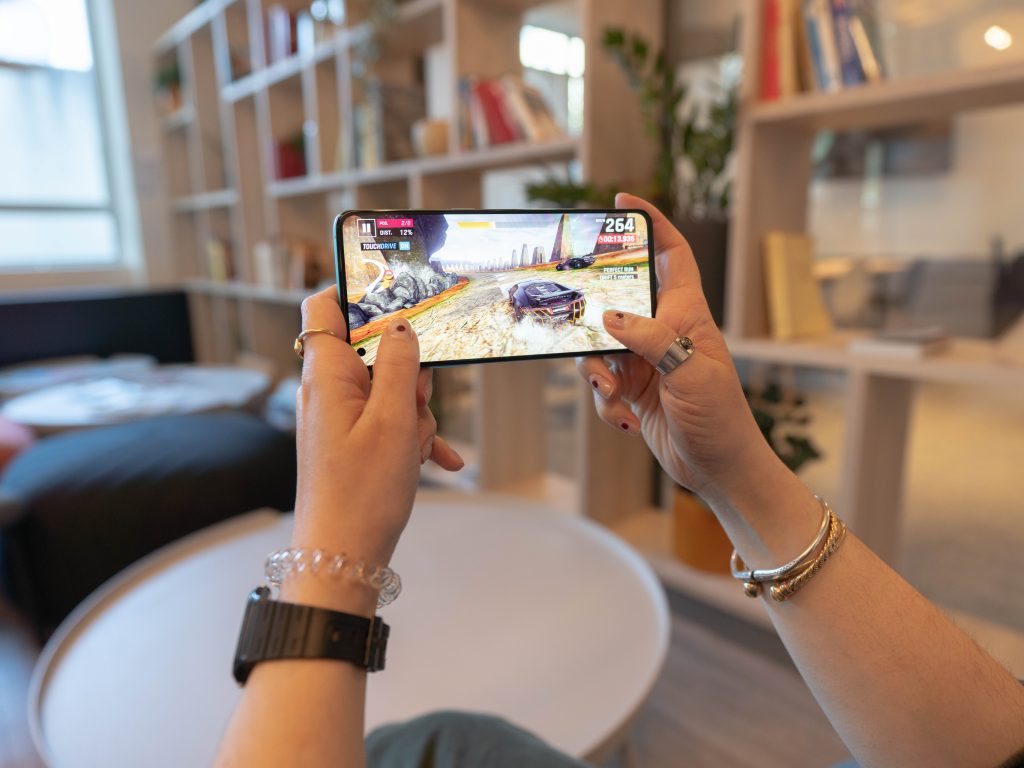 Gaming with the OnePlus 8T Pro

Let’s look more closely at the OnePlus’s performance in our autonomy sub-attributes.

The OnePlus 8T provides 46 hours, or nearly two days in our TUS test, which places it in a dead heat with the Oppo Find X3 Lite — the difference between the two is all of 32 seconds! That said, both were left in the dust by the Xiaomi Mi 10T Pro 5G, which garnered 62 points for reaching 61 hours in its TUS test (versus 52 points for the OnePlus and 51 for the Oppo):

The OnePlus 8T battery provided an average amount of autonomy in our on the go use cases, doing better than the competition for calling and camera (and that last — camera — is especially true when compared to the Xiaomi device). That said, it trailed both the Xiaomi and the Oppo when it came to our GPS tests.

The OnePlus 8T did very well when making 3G calls, reaching more than 28 hours (a lot of talking!). It was slightly better in 4G video streaming and video playback than the competition, but it did poorly when it came to music streaming.

The DXOMARK Battery charging score is composed of two sub-scores: Full charge and Quick boost. Full charge tests assess the reliability of the battery power gauge; measure how long it takes to charge a battery from 0 to 80% capacity and from 80 to 100%; and measure how long and how much power the battery takes to go from an indicated 100% to an actual full charge. With the phone at different charge levels (20, 40, 60, 80%), Quick boost tests measure the amount of charge the battery receives after being plugged in for 5 minutes.

In our charging attribute, the OnePlus 8T racked up 94 points over the Xiaomi Mi 10T Pro 5G’s 79 and the Oppo Find X3 Lite’s 92. (The OnePlus and Oppo come with 65W chargers, compared to the Xiaomi’s 33W charger.)

In the graph below, note that it is normal for charging to begin slowly as a means of protecting the battery, and is an indication that the depth of discharge was significant:

The OnePlus 8T’s total charging time from a completely empty to a completely full battery is 39 minutes, which is a little bit better than the Oppo FindX3 Lite (42 minutes), and much better than Xiaomi Mi10T Pro (1 hour 9 minutes) — unsurprising, again because of the big difference in chargers.

By plugging in the OnePlus device for 5 minutes when it has a battery charge under 50%, users will gain more than 5 hours of autonomy. Perhaps of greater interest to gaming fanatics, at least, is that when its battery is near death’s door, the 8T needs only 17 seconds to gain 1% of battery life — and that is the quickest charge of the three devices: the Oppo comes in a relatively close second (24 seconds), but it takes the Xiaomi 2.5 minutes for 1% more power.

The DXOMARK power efficiency score consists of two sub-scores, Charge up and Discharge rate, both of which combine data obtained during robot-based typical usage scenario testing, outdoor mobility testing, charging evaluation, and power measurements, and then take into consideration the device’s battery capacity.

At 87%, the OnePlus 8T’s charger showed very good efficiency, if behind the Xiaomi device’s 90%. With slightly more than 81% nominal efficiency (which includes not just the charger but also internal smartphone circuits), the OnePlus beats both the Xiaomi (76%) and the Oppo (79%), and is one of the best for this sub-attribute in our database so far.

The OnePlus 8T with its 65W charger provides both overall fast charging and great quick boosts of power. Where it falls a bit short is in autonomy, particularly in comparison with the Mi 10T Pro, where the 8T lags behind by more than half a day in average use. However, the tradeoff between autonomy and charging among the three phones results in a virtual tie, with the OnePlus only one point behind the Xiaomi and 3 points ahead of the Oppo in the high-end segment.