With a price of only 5.5 million VND, Xiaomi Redmi Note 8 Pro is a smartphone worth buying in the mid-range segment with a beautiful design, impressive performance and, importantly, a super huge 64MP camera.

Since its launch, Redmi Note 8 Pro has attracted a lot of attention from users as well as technology media, not only because of its completely redesigned design compared to its predecessor, Redmi Note 8 Pro is also impressive because this is one of the first two smartphones in the world equipped with 64MP camera.

Apart from the design and camera, the Redmi Note 8 Pro also owns a pretty powerful hardware configuration in the segment with MediaTek Helio G90T chip. This is a chip advertised by MediaTek for gamers as well as heavy graphics processing tasks. The actual performance of this Sforum chip will be sent to you in a detailed review in the future. In the context of this article, let's open the box with Sforum and in the hands of the extremely hot Redmi Note 8 Pro today.

The case of this year's Redmi Note 8 Pro is designed with 2 tones of red and orange mixed together. On the back and bottom of the box will be some information about the device, most notably the 64MP camera. Accessories include a USB-C cable, an 18W fast charger and a silicon case. 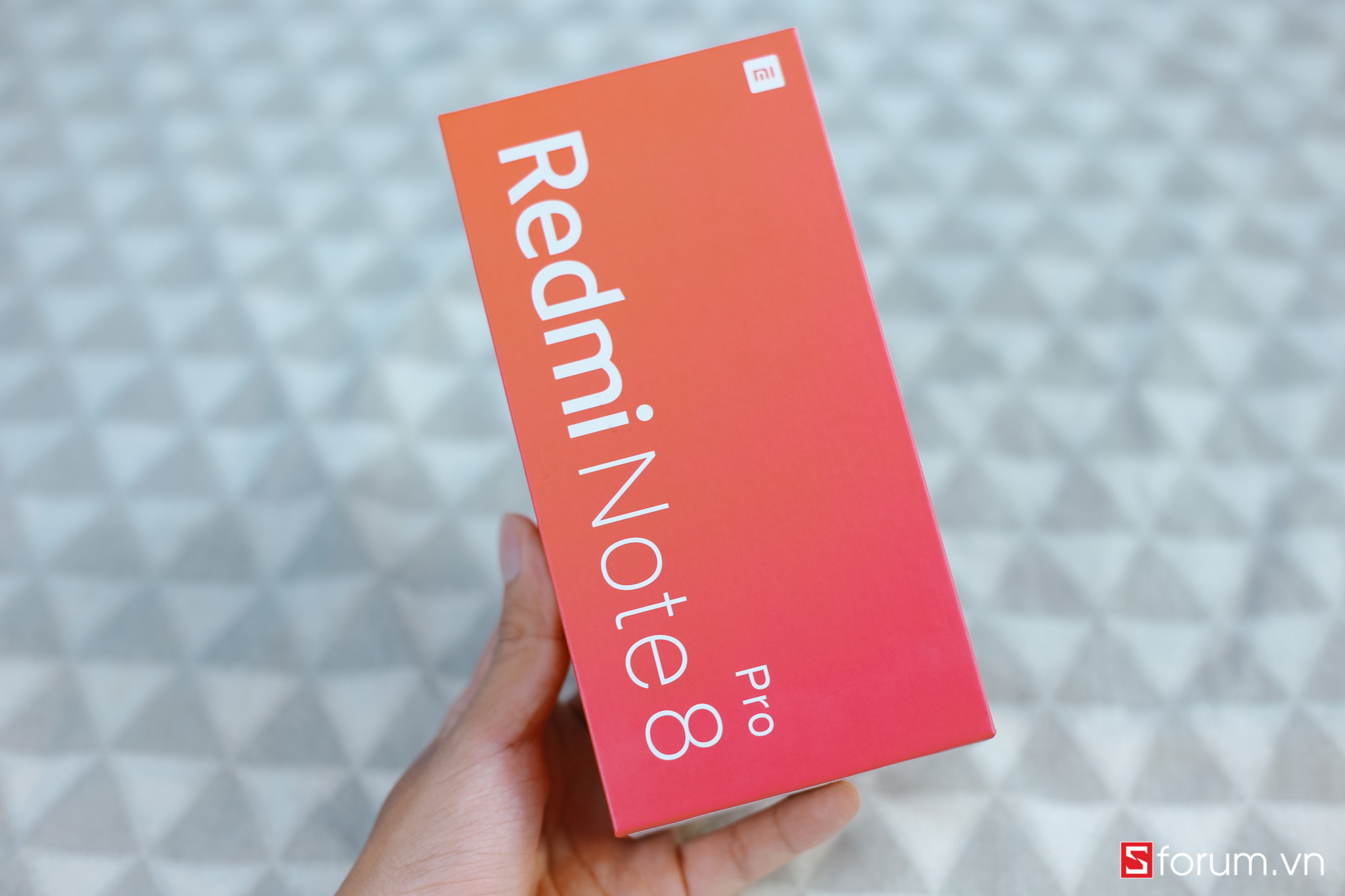 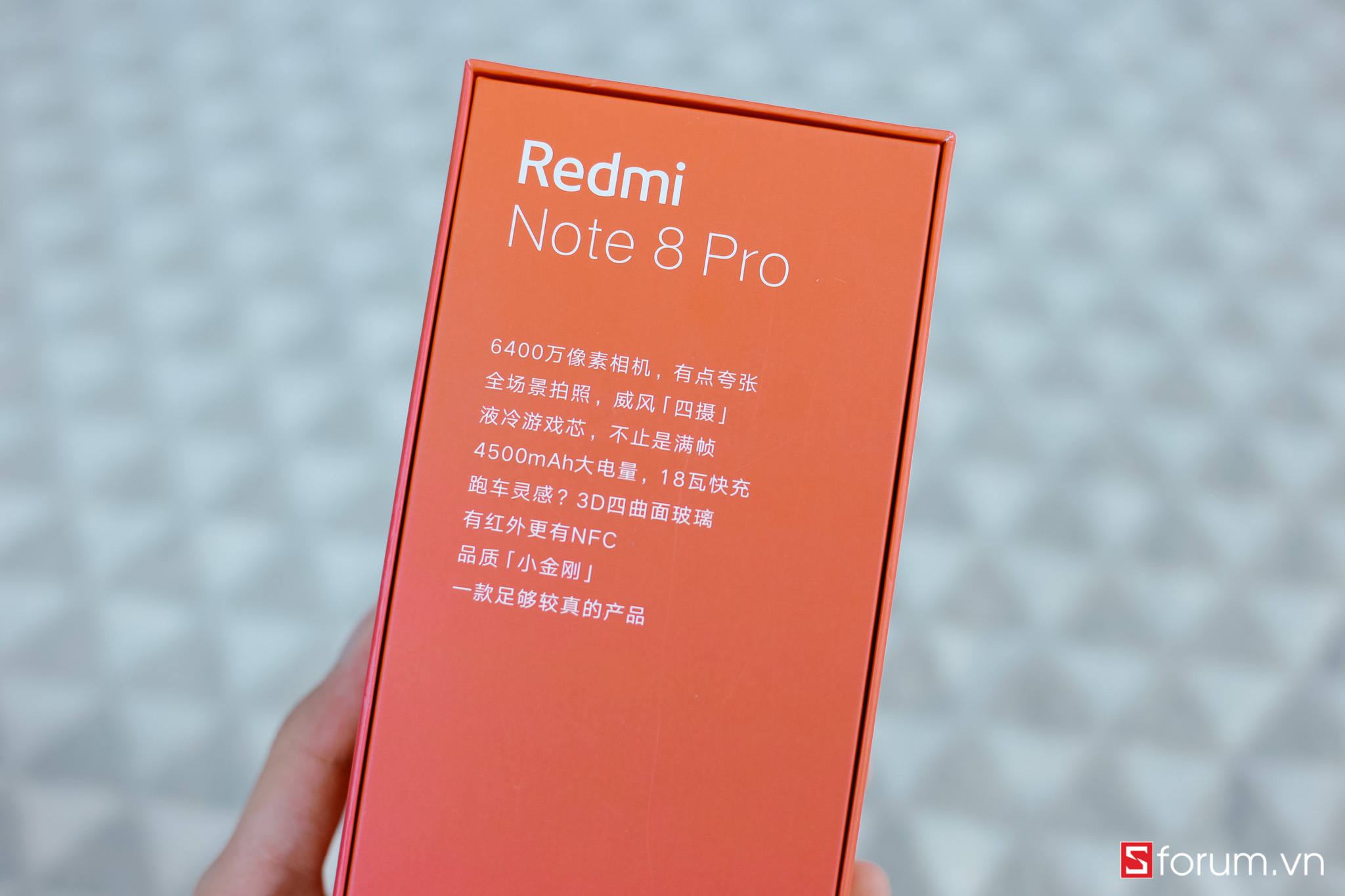 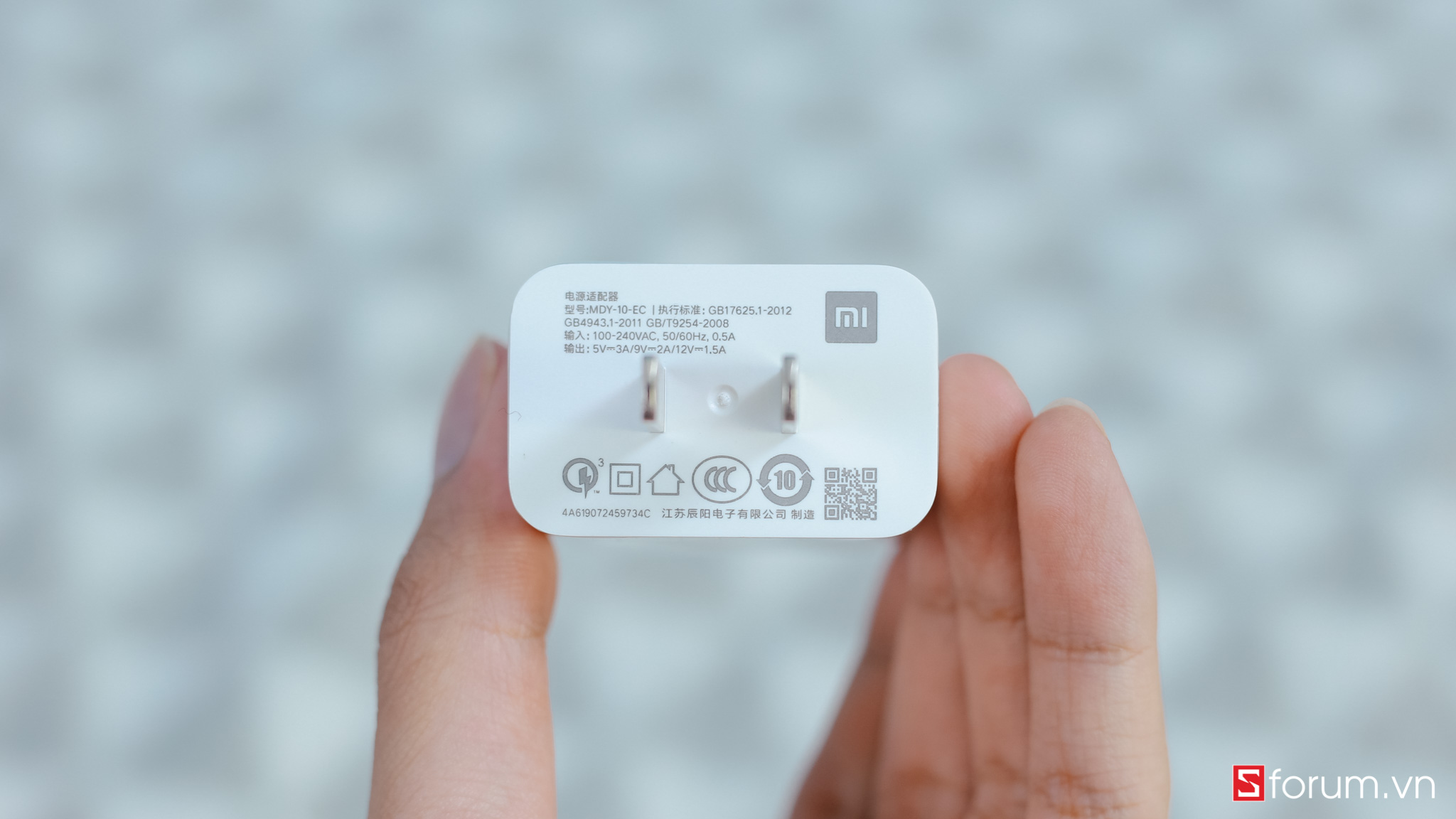 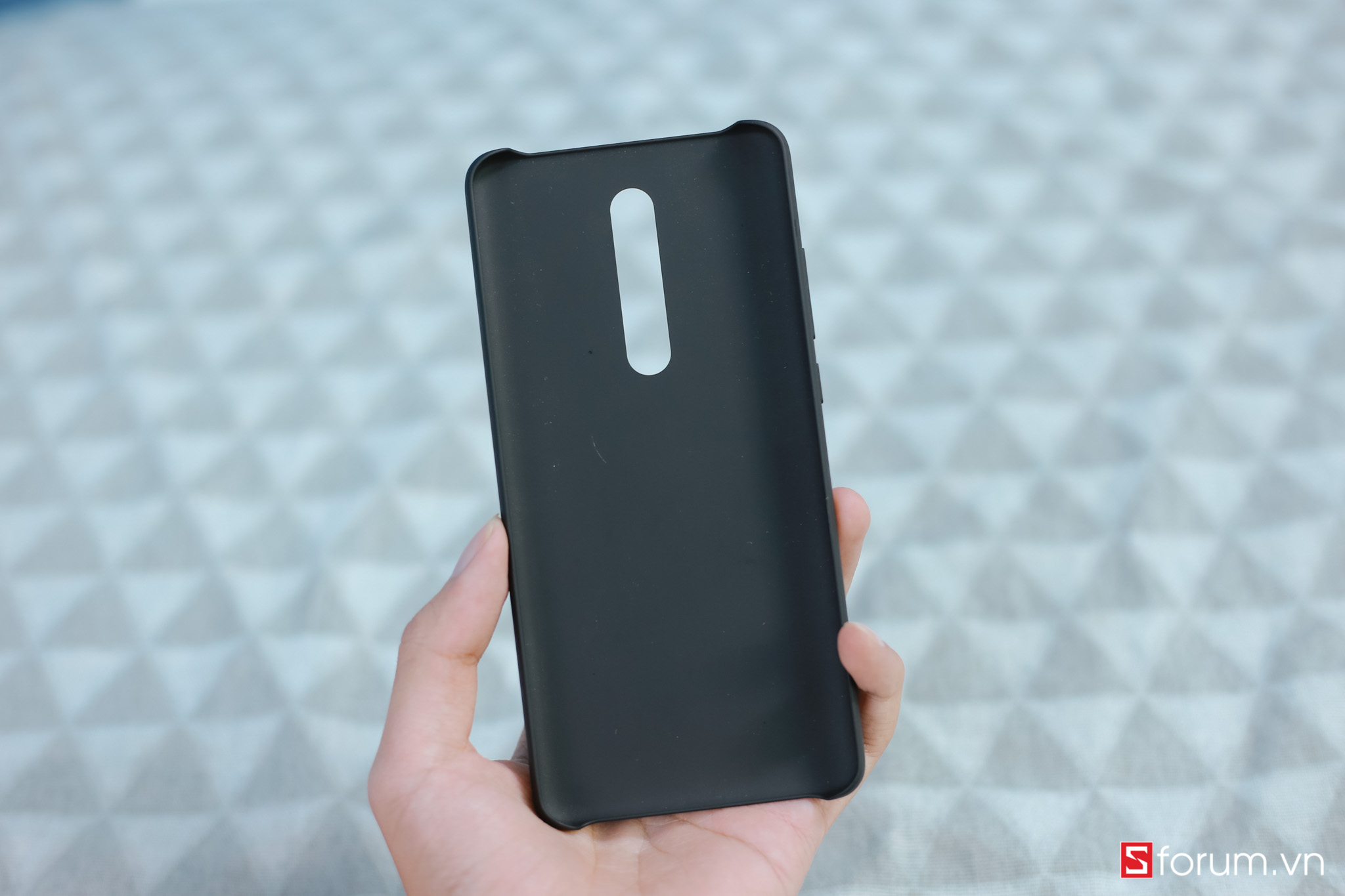 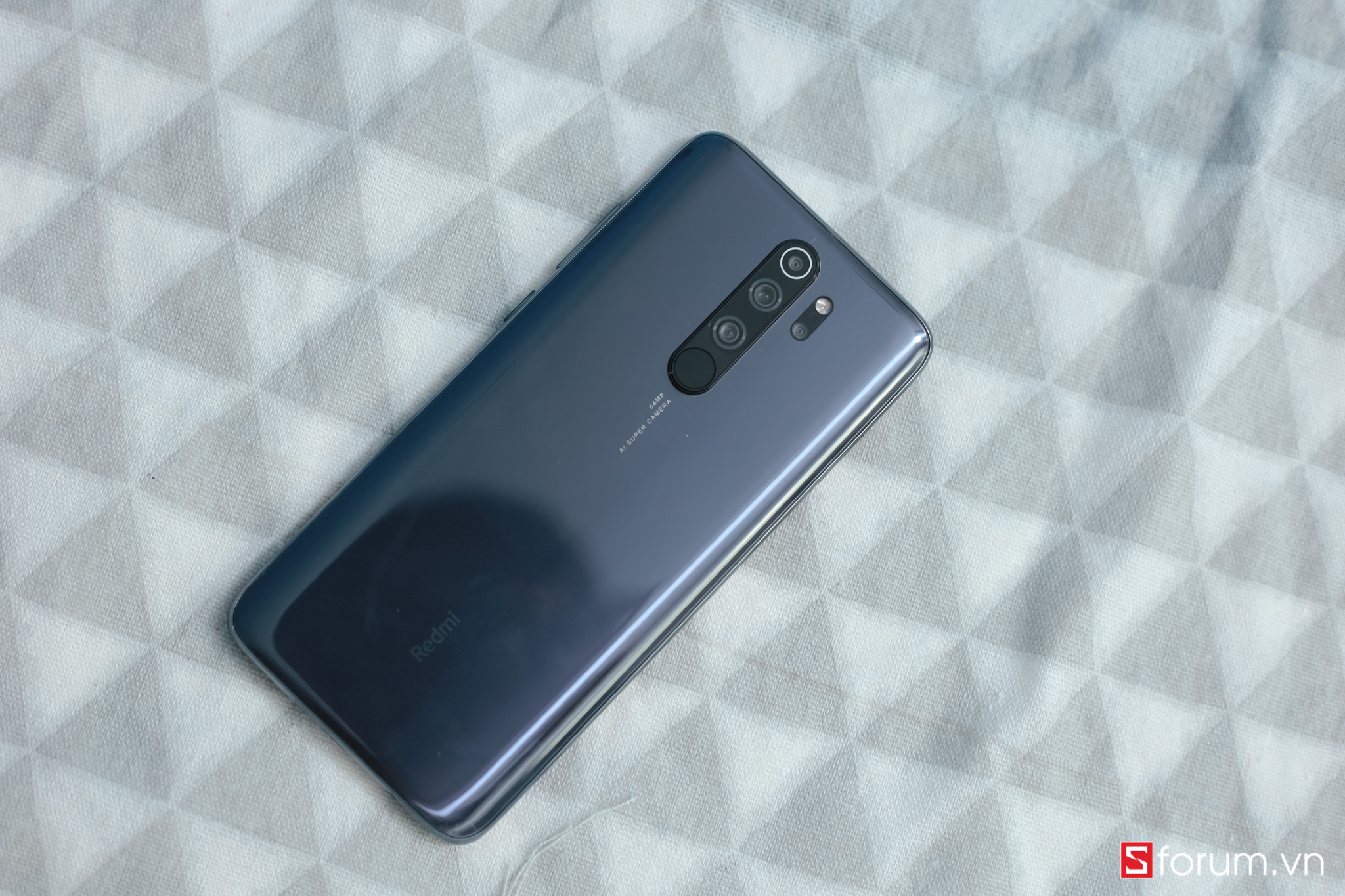 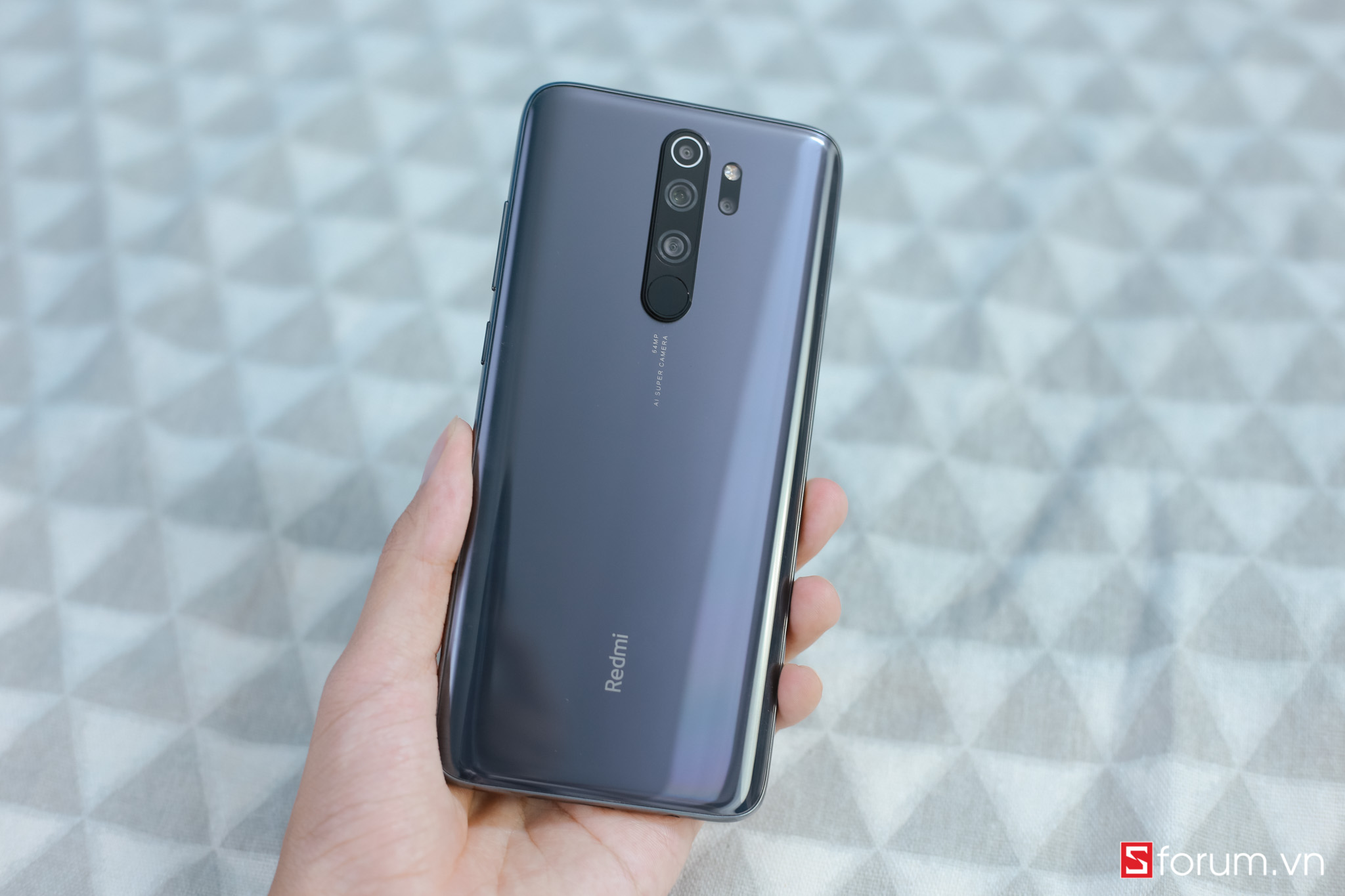 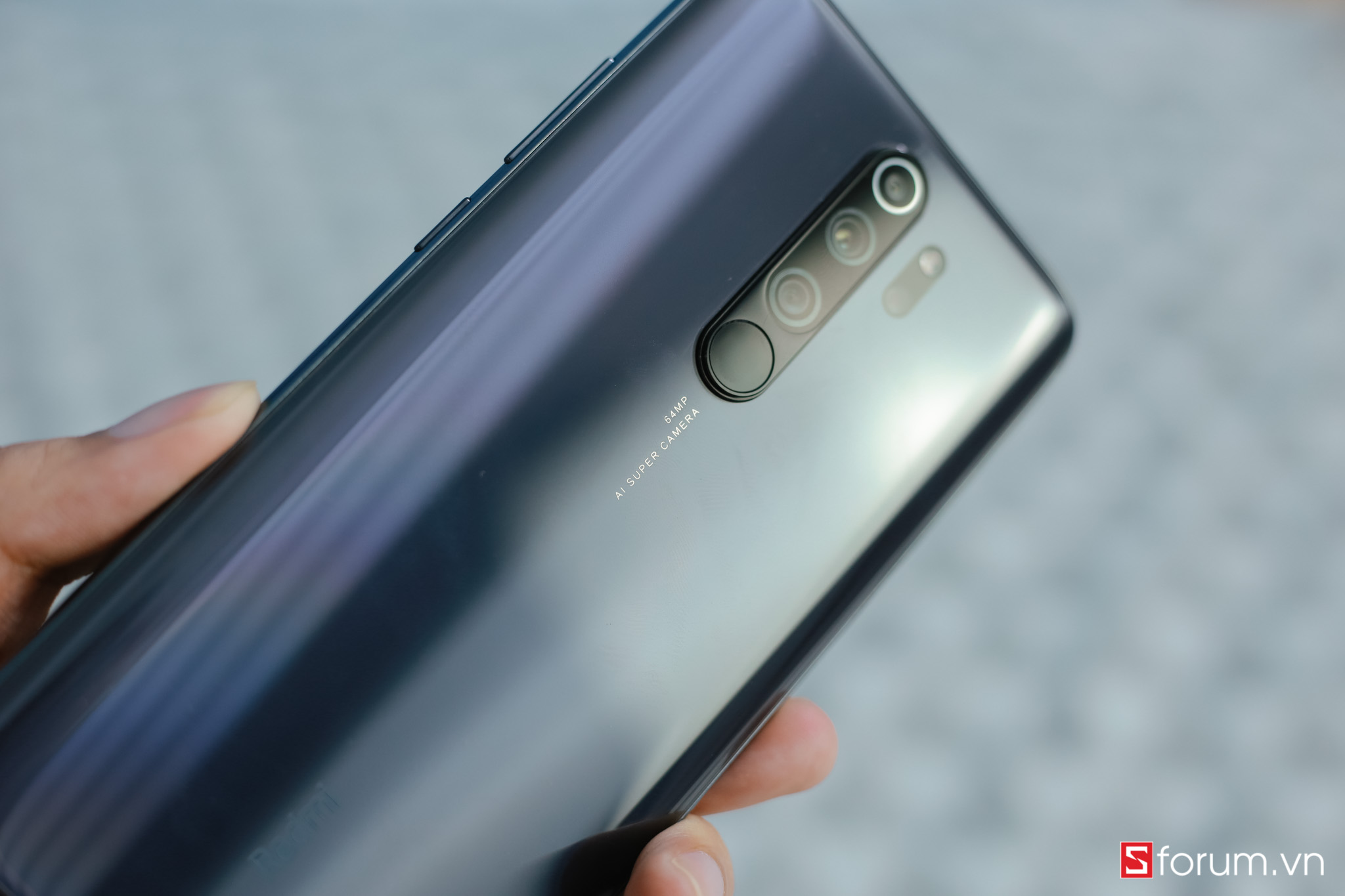 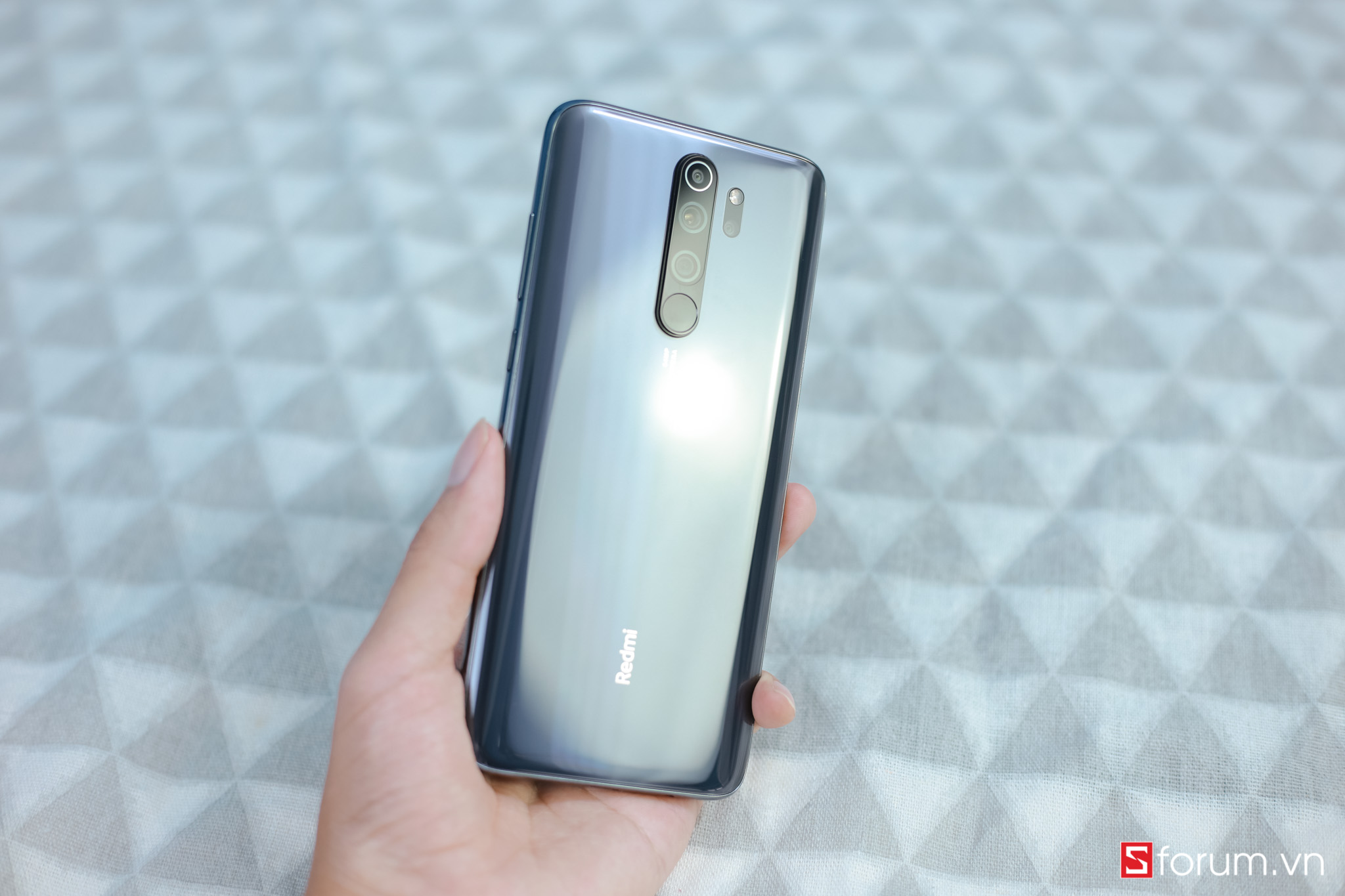 On the back, the main camera cluster of Redmi Note 8 Pro has now been placed in the middle, instead of deviating to the right as on the standard version. The fingerprint sensor is located right below this camera cluster, and the "Redmi" logo is also moved to the middle, which feels a lot more balanced. There will be 3 color options for users to choose from black, blue and white. 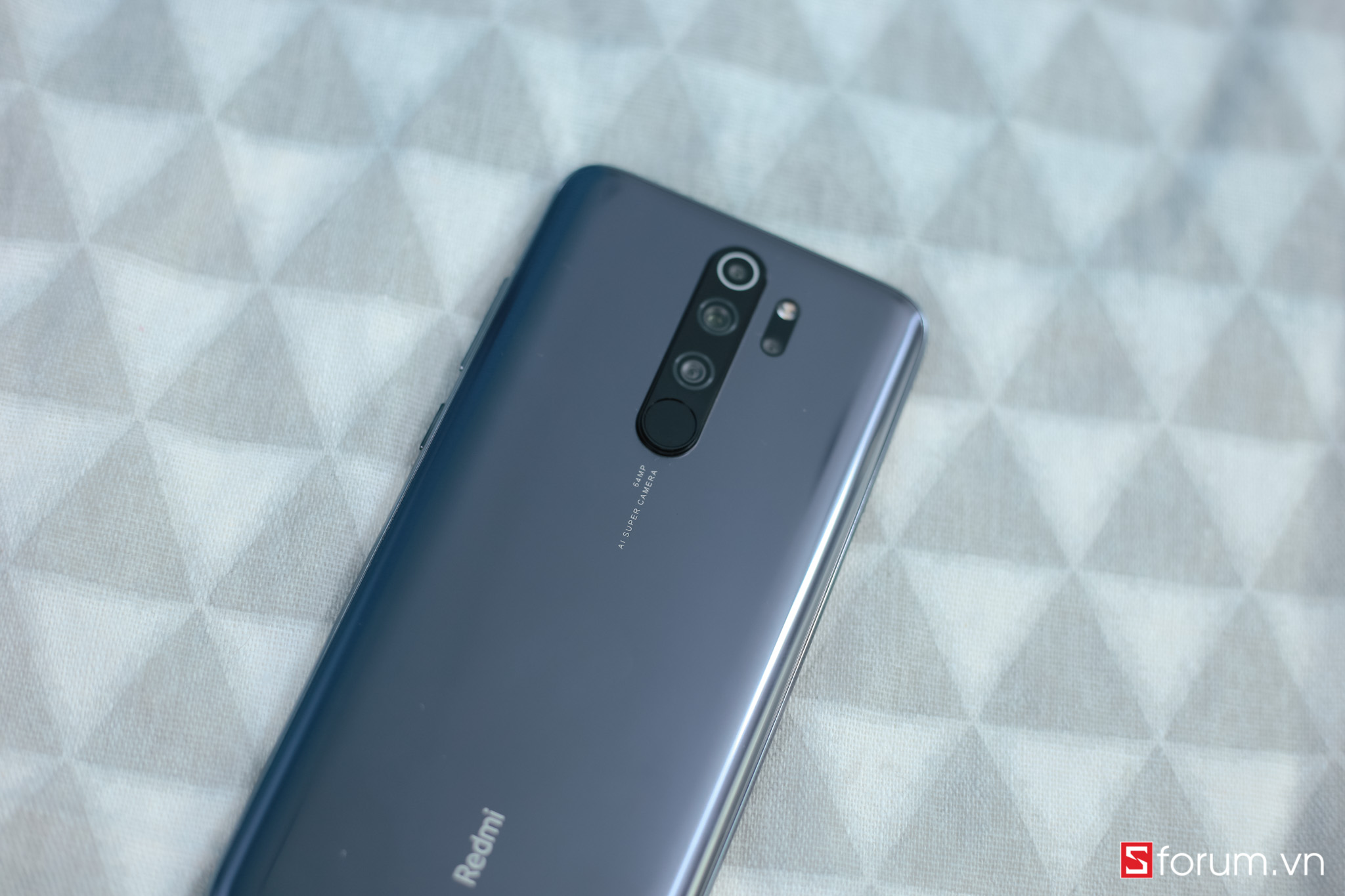 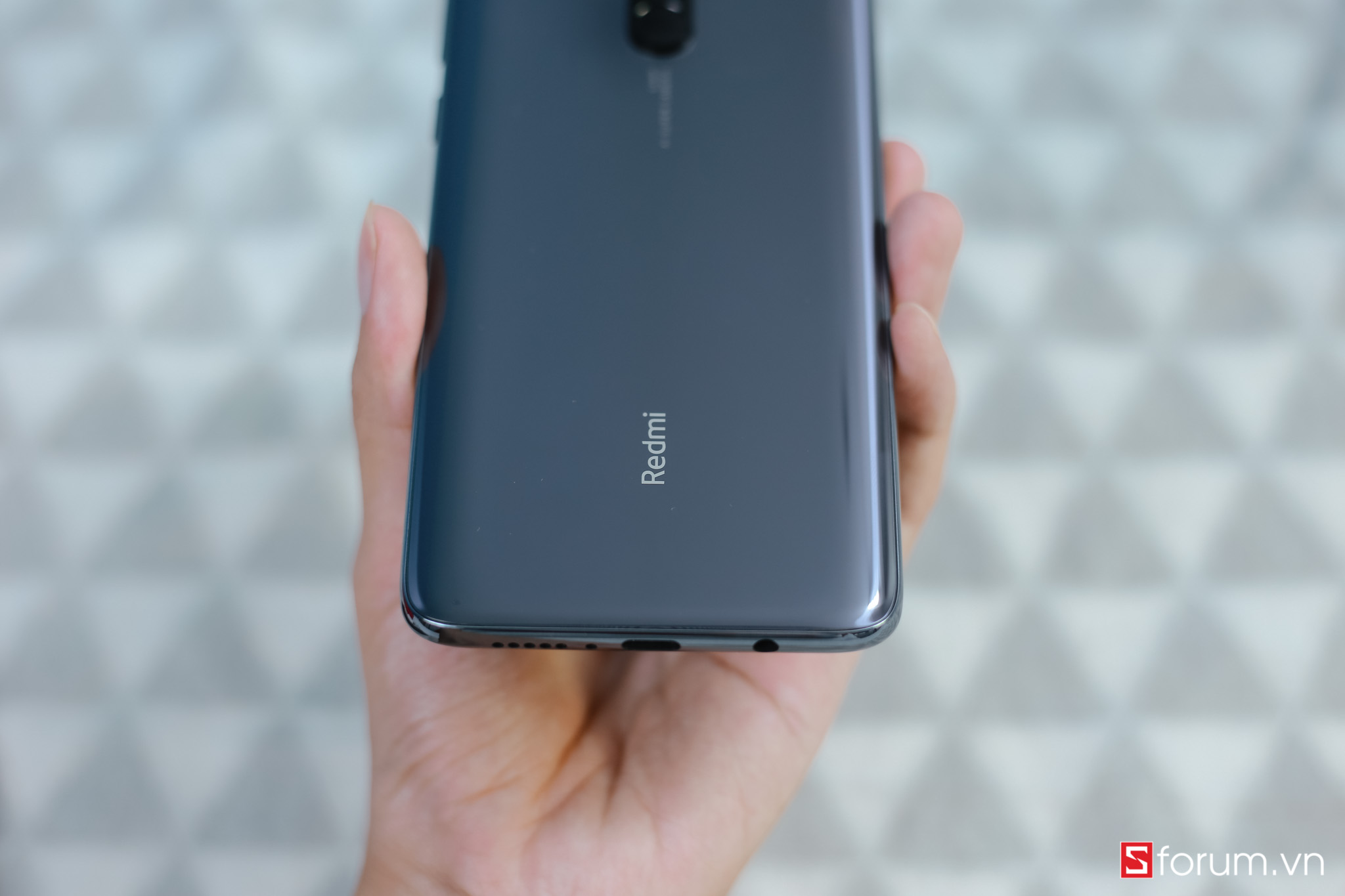 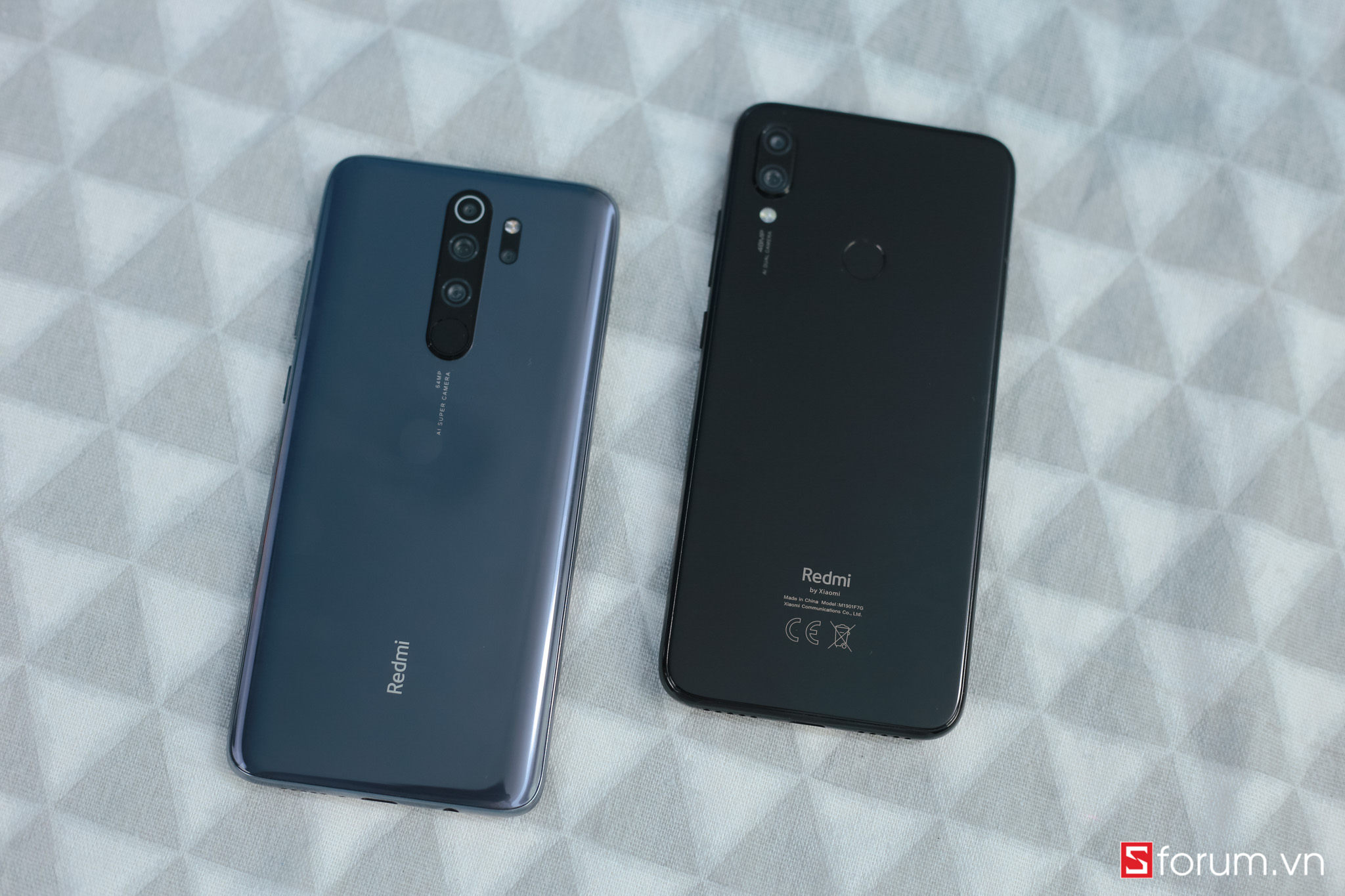 There is a subtle lack of detail as the main camera cluster of the device is designed to protrude quite a lot, more than on previous generations. It is unclear if this is because the new sensor and lens on the Redmi Note 8 Pro have a different design, but users should use the case attached to the device and avoid moving the device on a flat surface, otherwise the camera cluster will be very easily scratched. 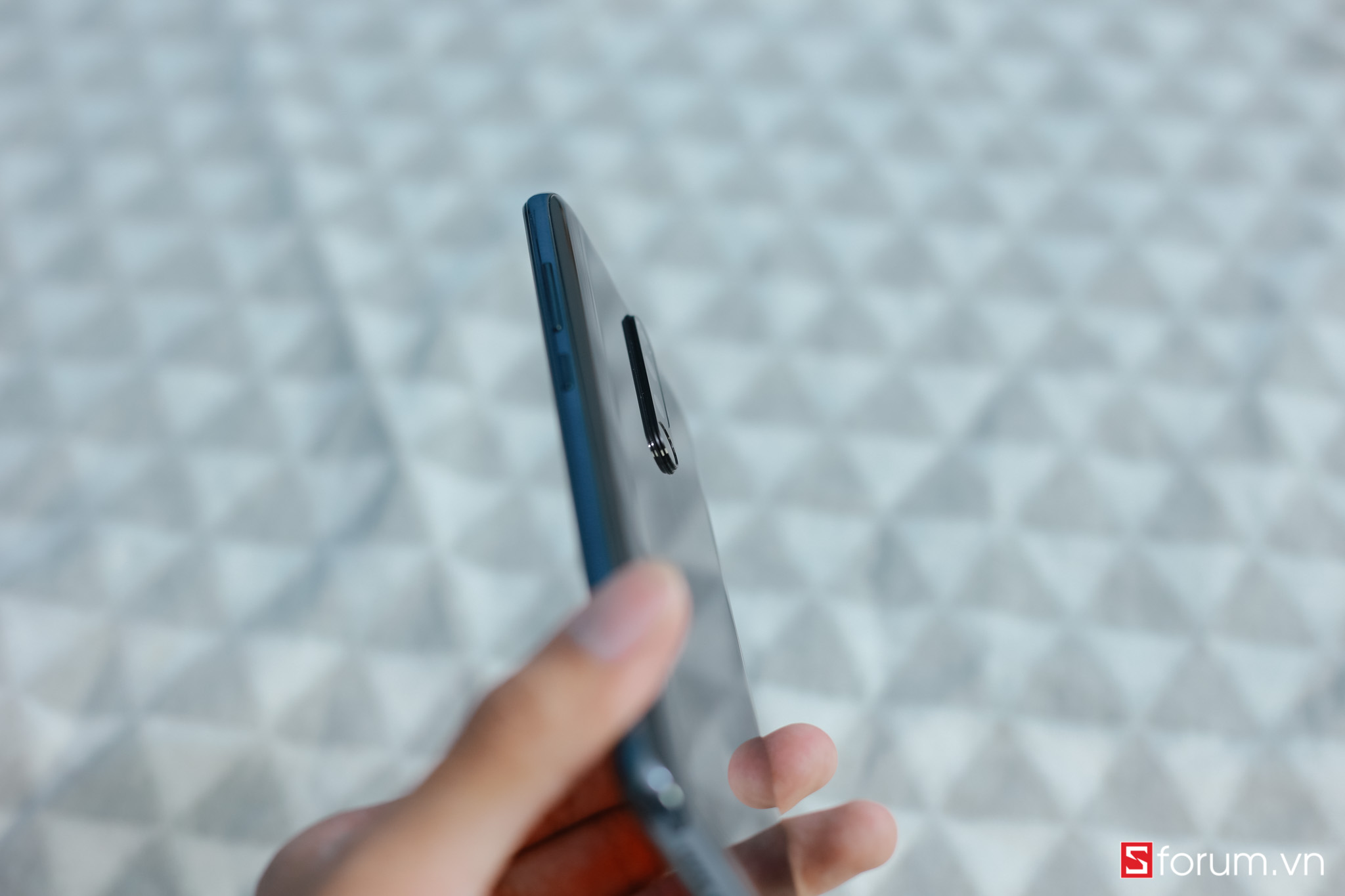 Coming to the front, Redmi Note 8 Pro will still be equipped with a screen with a water-drop design similar to the standard version. The whole "water drop" area is also designed to be slightly curved and more delicate than its predecessor. The screen border of the machine has also been made thinner, especially on the bottom edge. This screen of the machine size of 6.53 inches using IPS panels. The first feeling when using this screen is the machine for very good display quality, clearer and fresher colors. Much improved compared to the previous generation 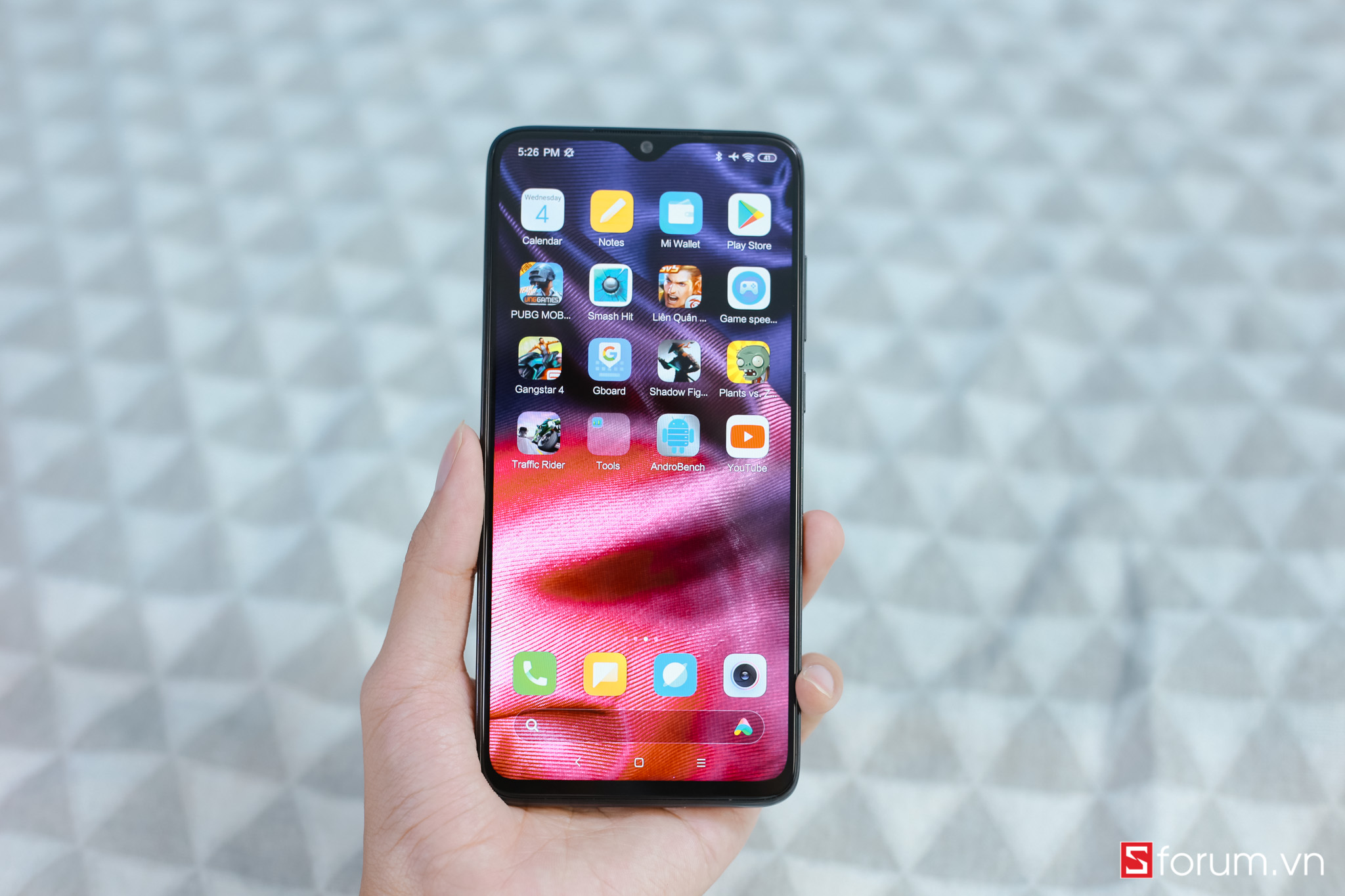 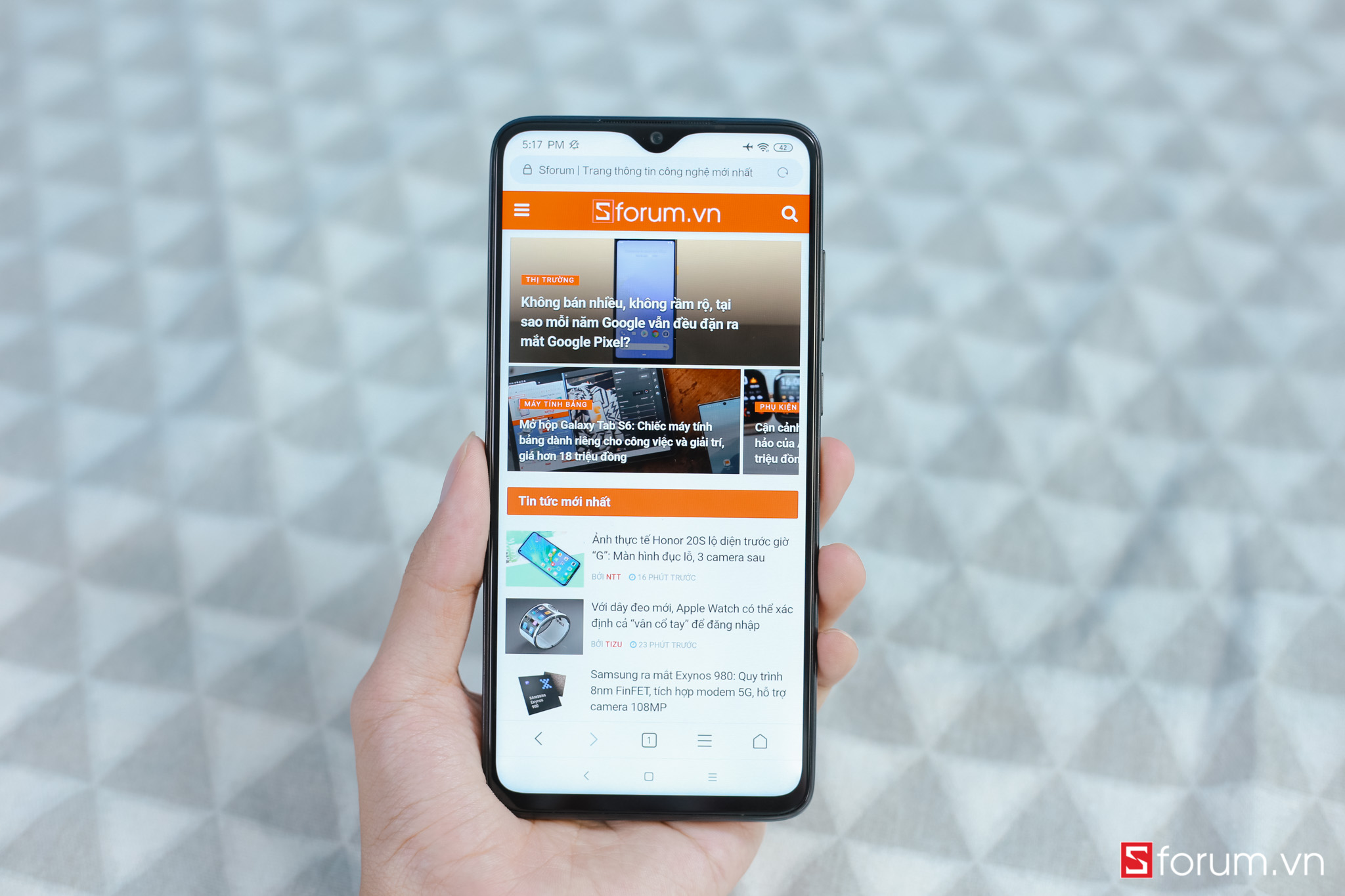 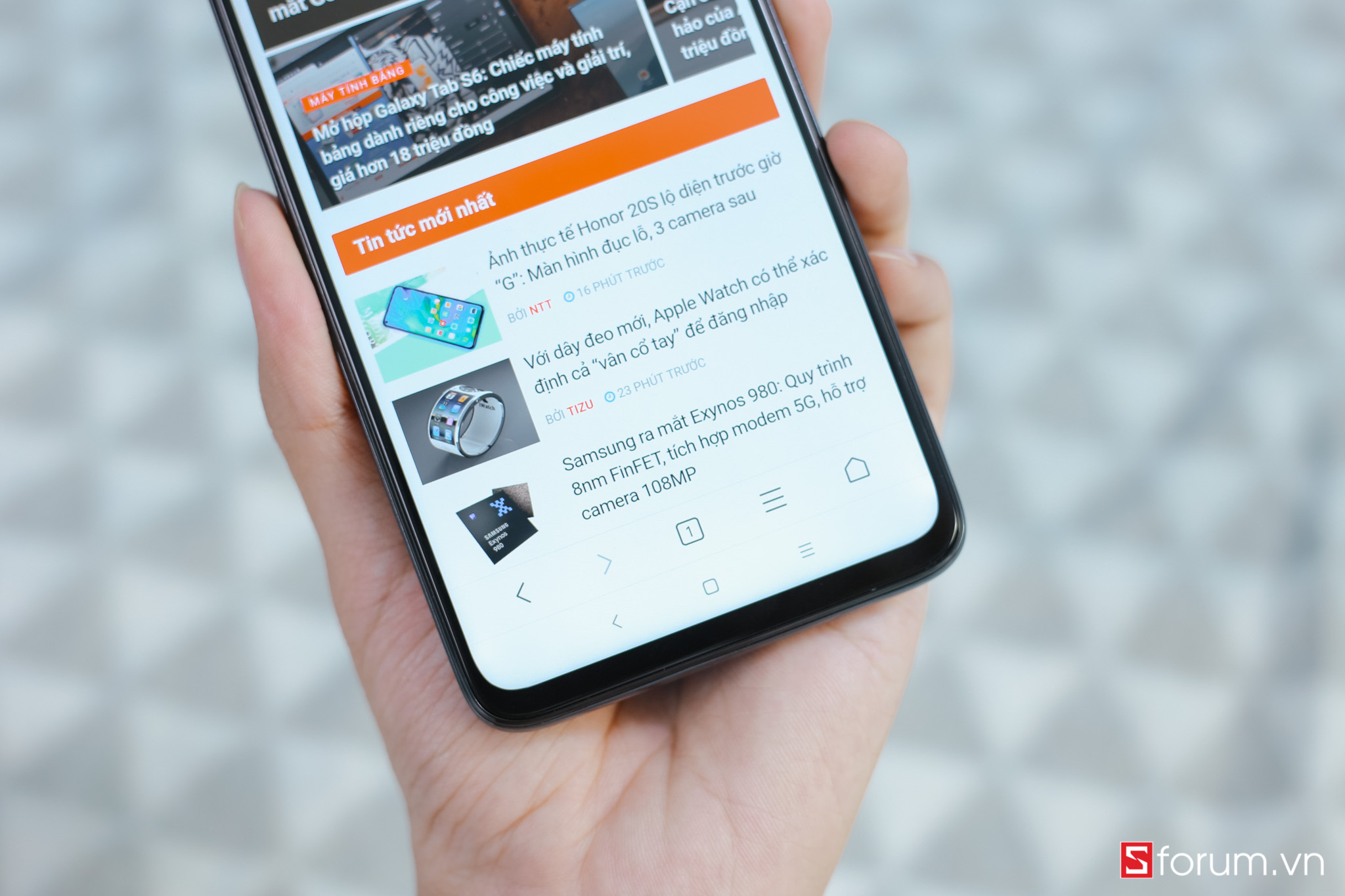 The sides are also arranged by Xiaomi's reasonable buttons and connectors, including the power button and volume key located on the right edge, the left side is the sim tray, charging port, phone mic, speaker strip and headphone jack 3.5. mm on the bottom edge, this is a plus point because most smartphones are now no longer equipped with this connection. Finally, the upper edge, where the 2nd recording mic and infrared eye are located. 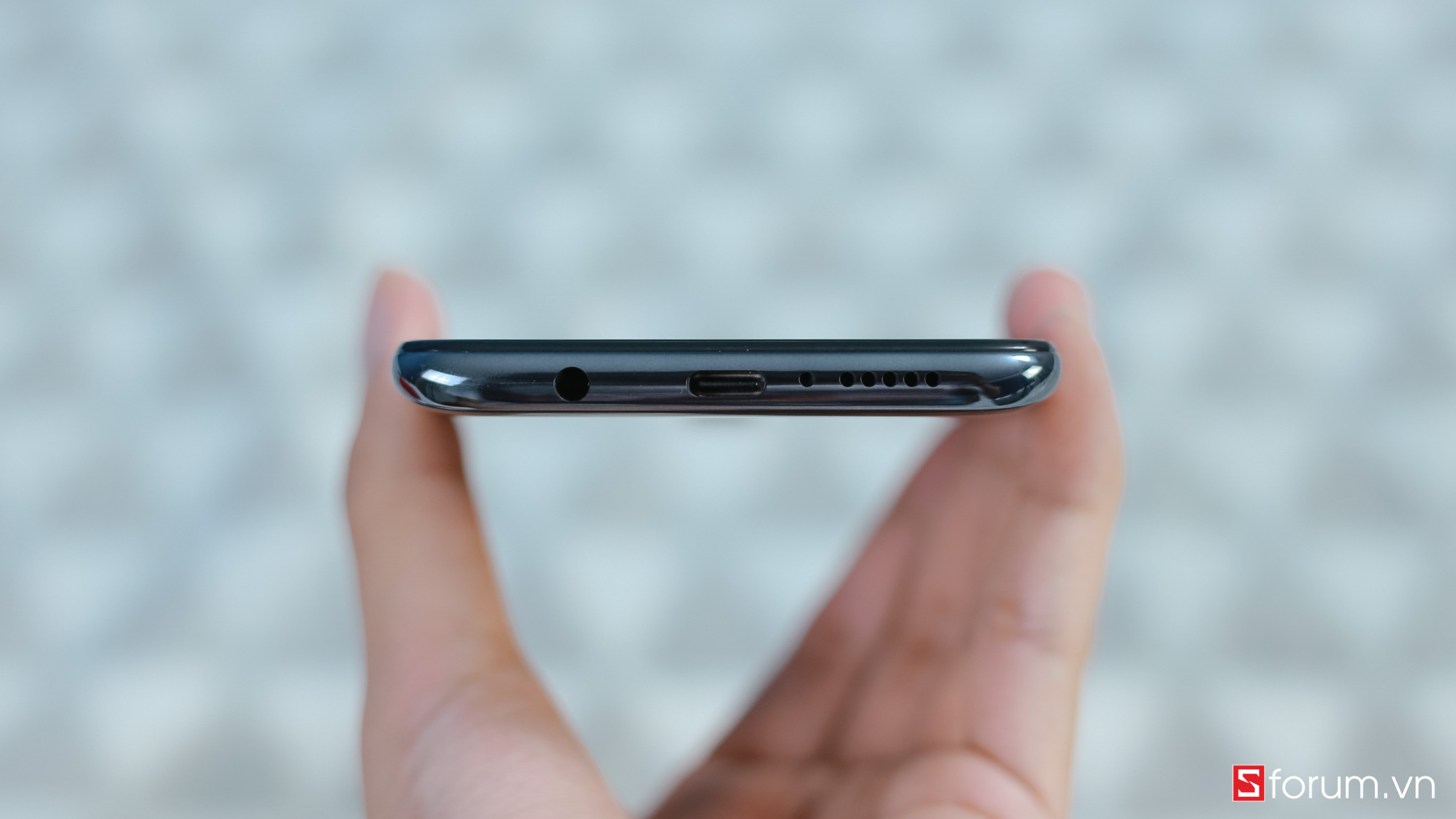 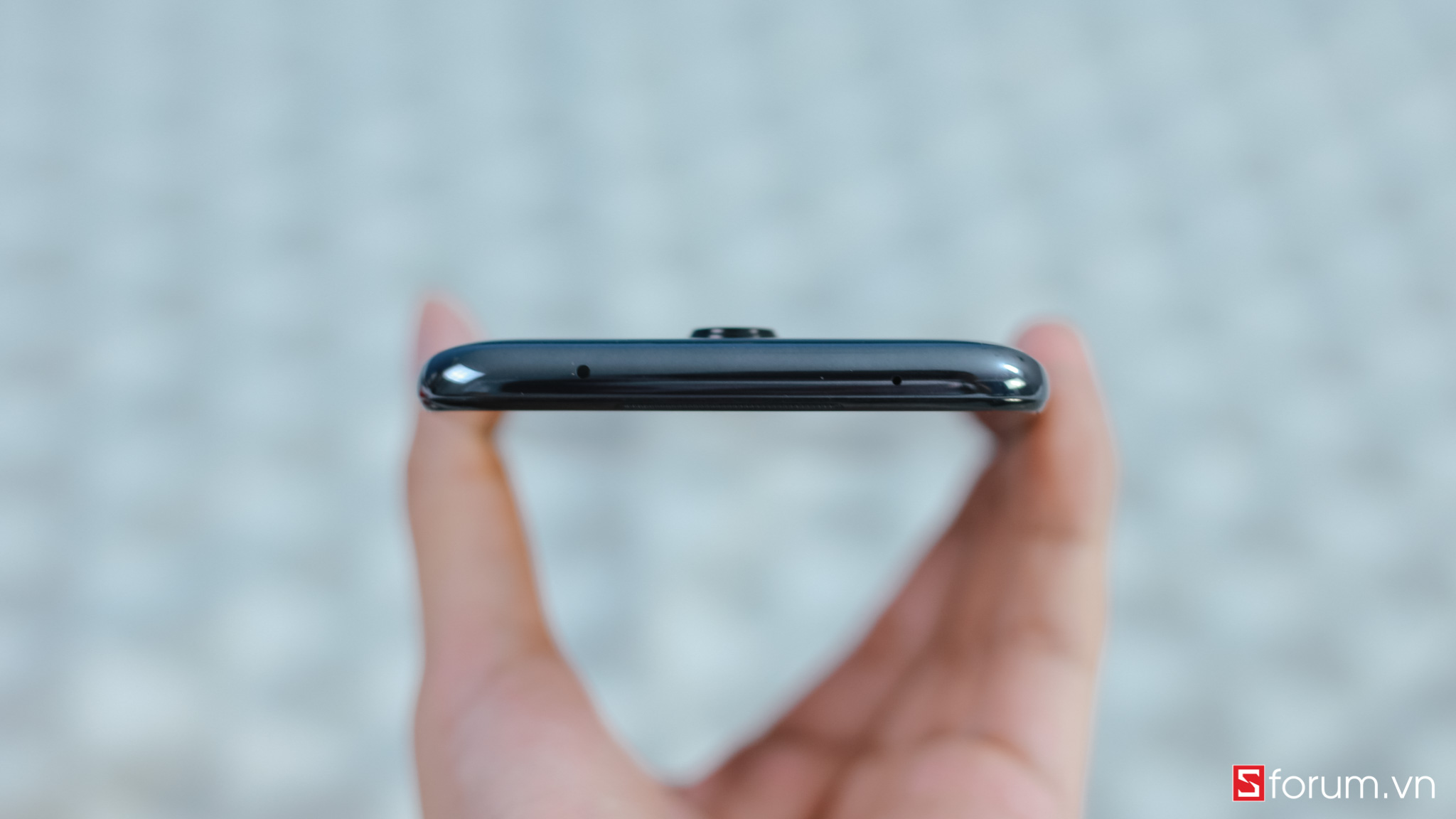 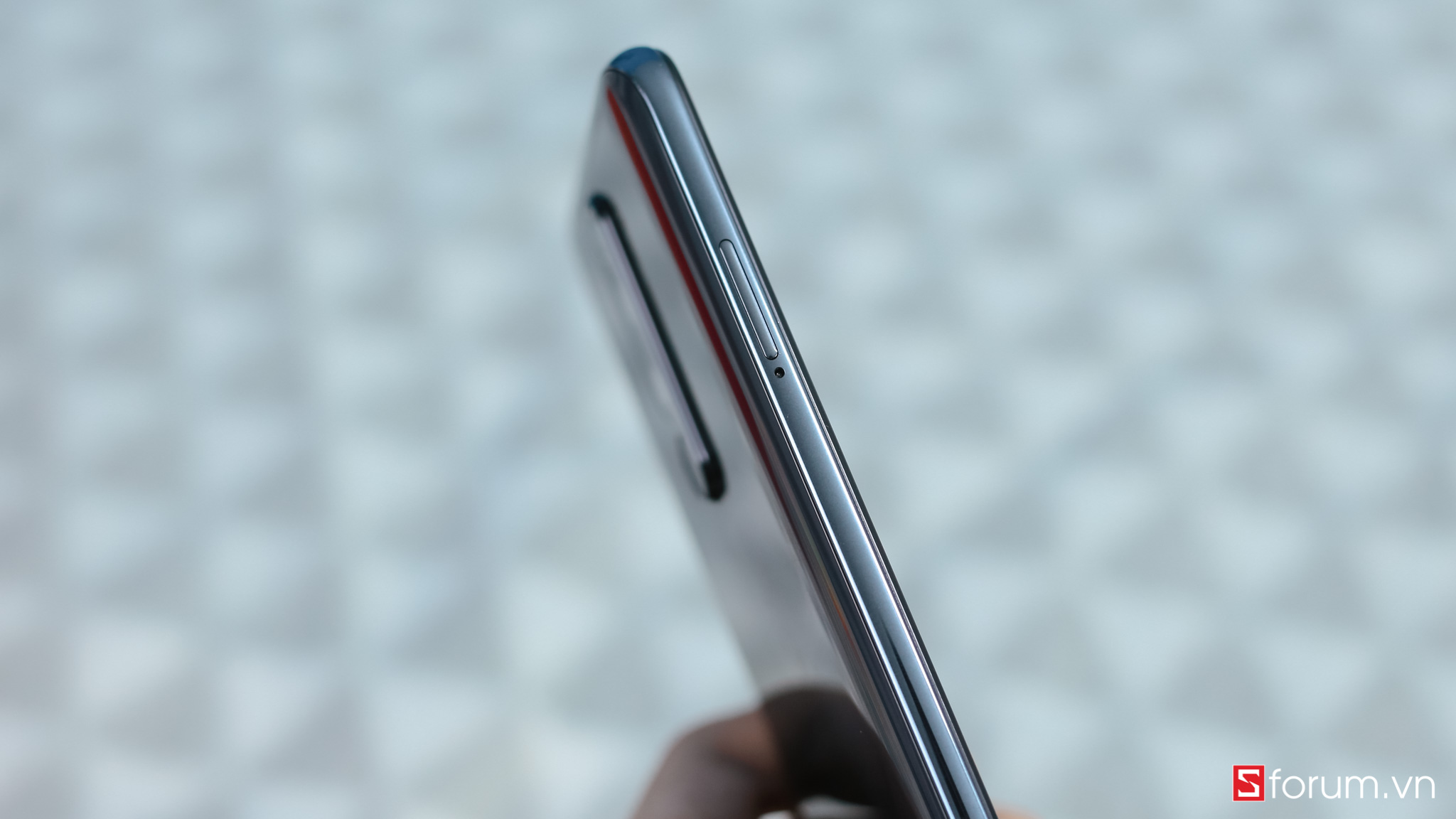 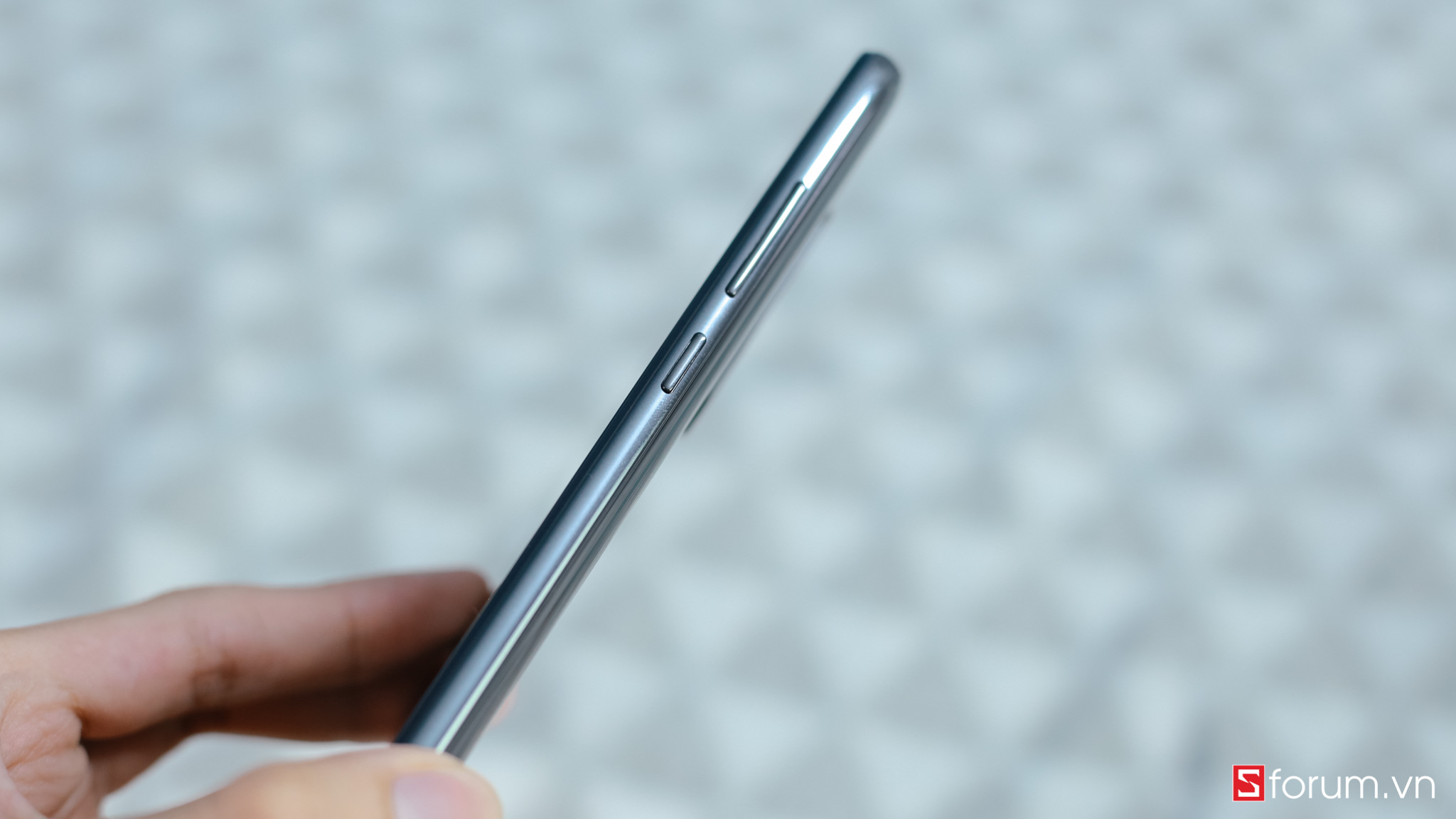 Regarding the camera, Redmi Note 8 Pro is equipped with a cluster of 4 cameras on the back. If the main sensor has a resolution of up to 64MP, the remaining 3 cameras only have a relatively low resolution of 8MP for super wide-angle camera and 2MP for macro cameras as well as 2MP for depth cameras. The camera app comes with many features and shooting modes, such as 64MP shooting mode, night mode, Manual Pro mode, video recording modes, etc. 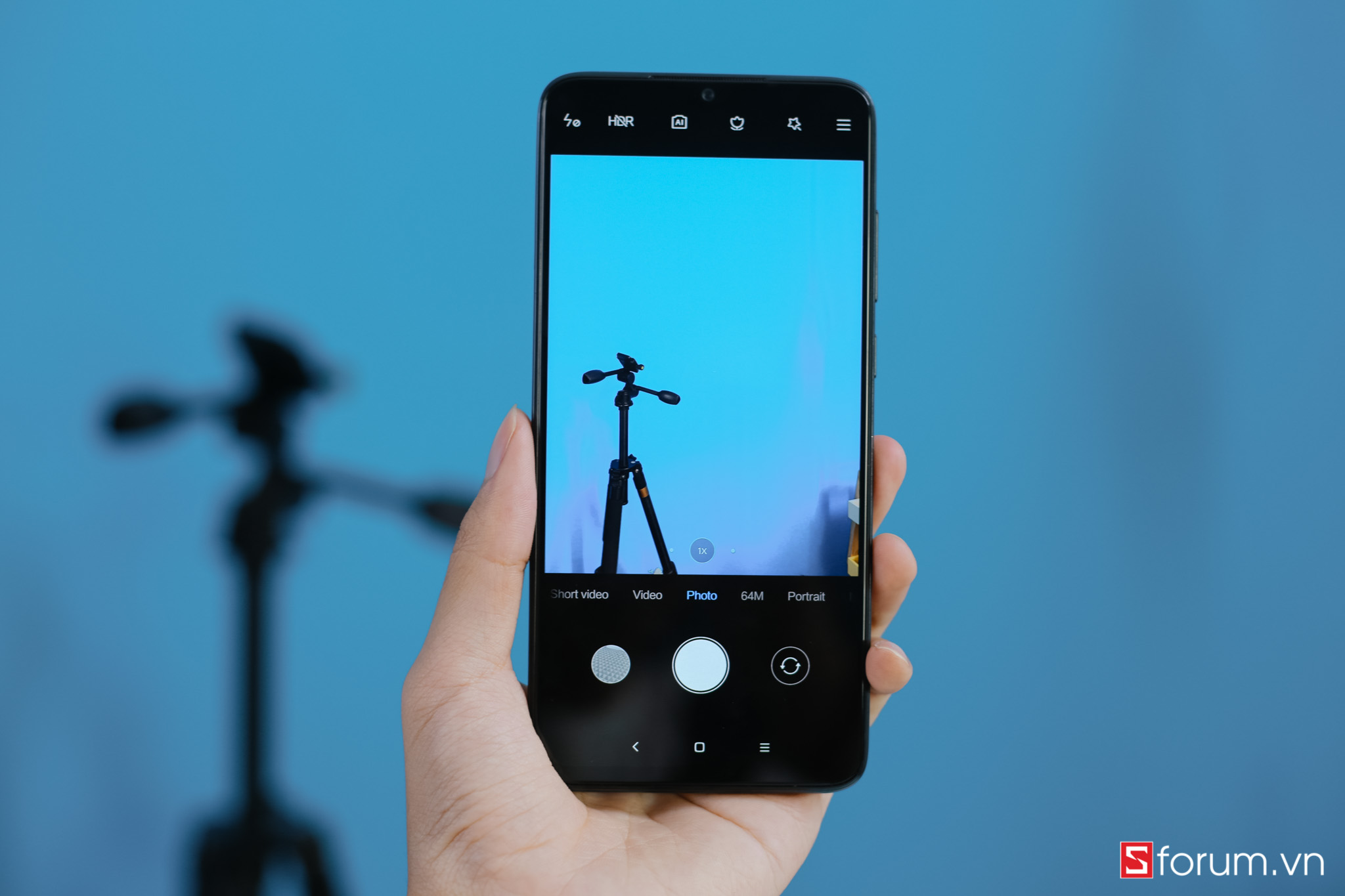 In 64MP mode, the camera saves photos quite quickly, almost instantly, significantly improved on its predecessor. However, in this mode, the image has a very high resolution and capacity, from 14MB to 20MP for a photo. Therefore, if the demand for the camera is only basic, the normal shooting mode is more than enough. 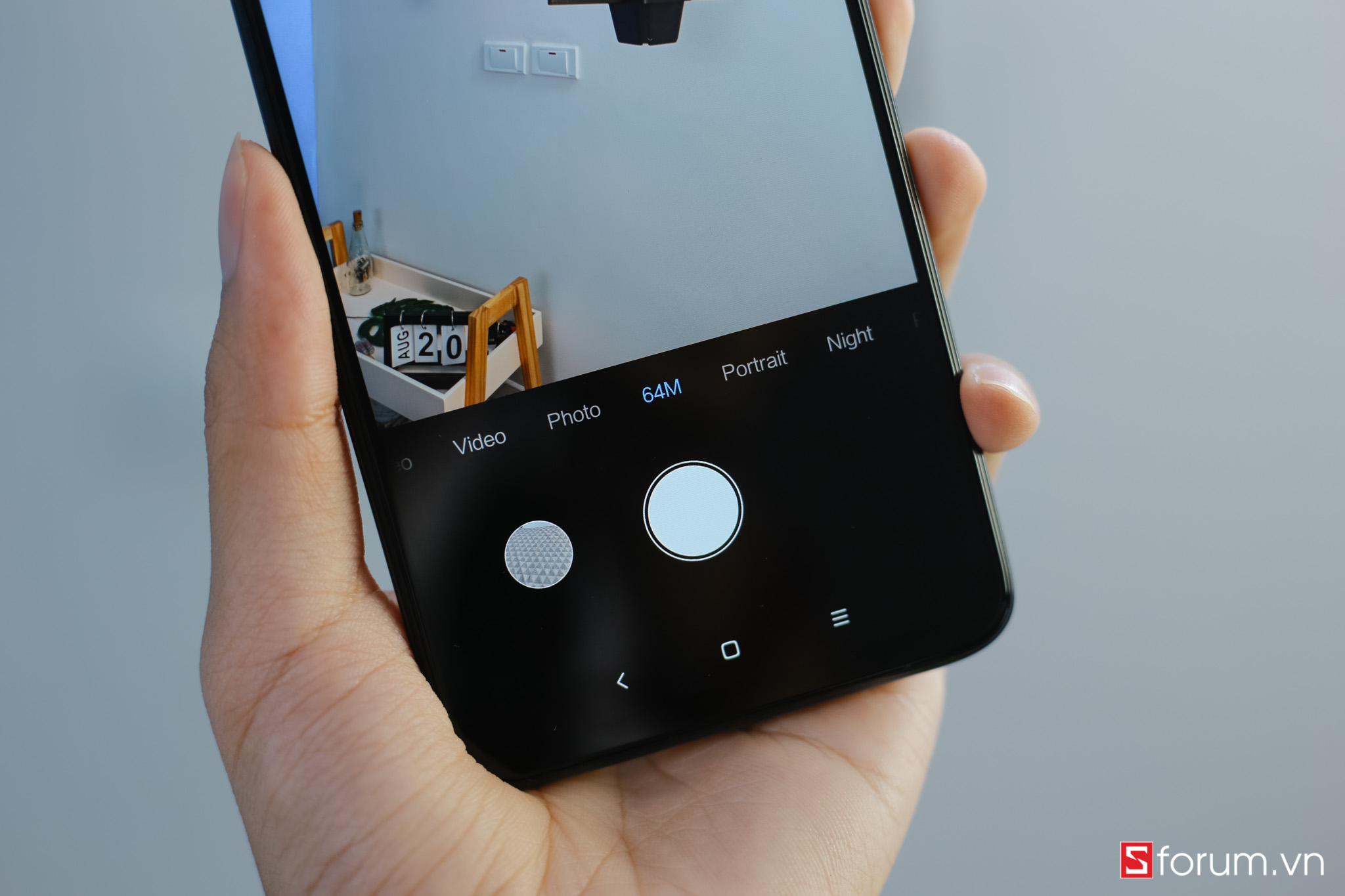 In terms of hardware configuration, this year, Xiaomi has equipped MediaTek Helio G90T chip for the Redmi Note 8 Pro instead of the chips from Qualcomm. The chip comes with 6 / 8GB RAM and 64 / 128GB of memory for an impressive performance. Judging by AnTuTu Benchmark in real terms, Redmi Note 8 Pro achieved an impressive score of more than 225,000 points. 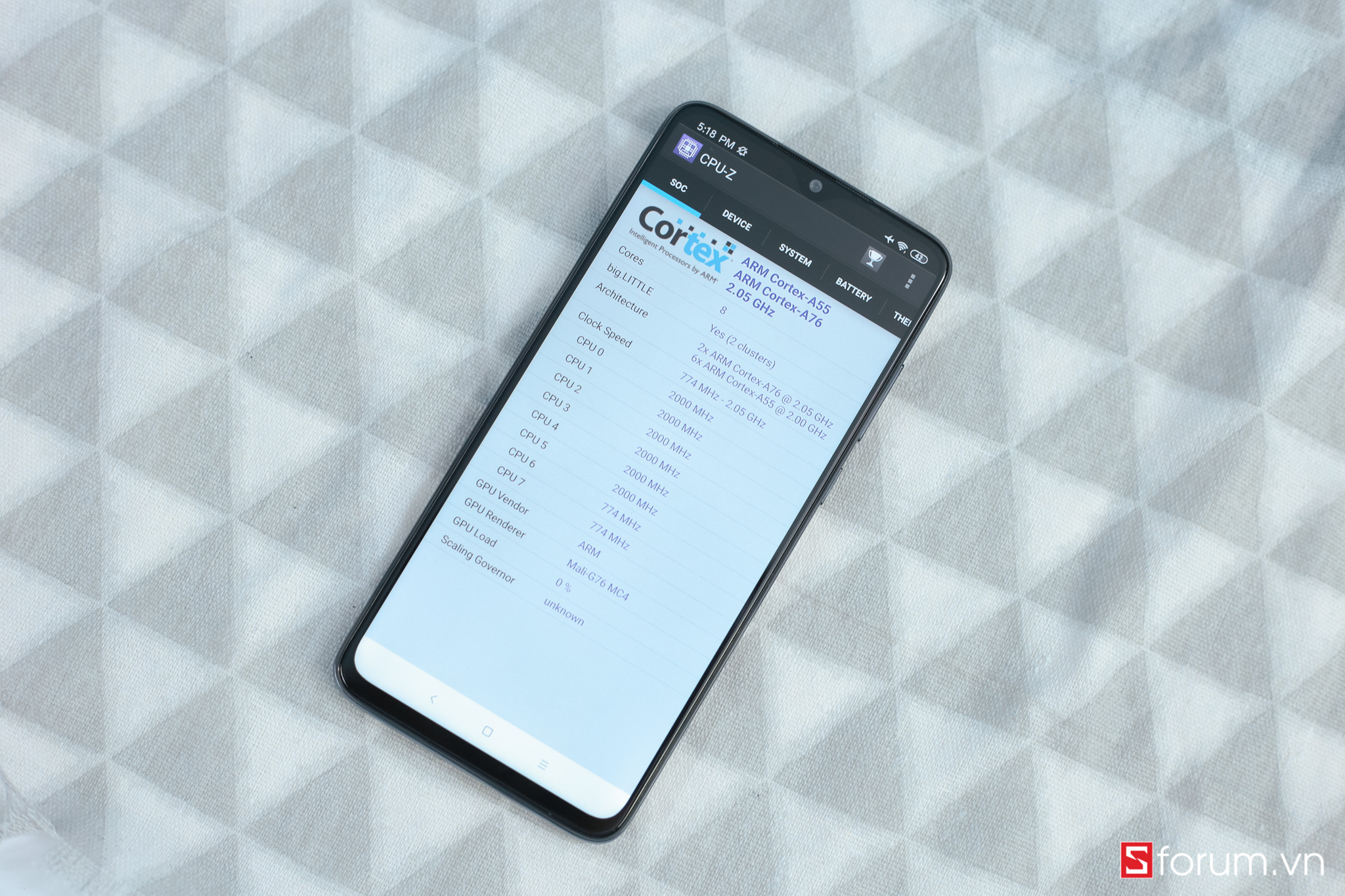 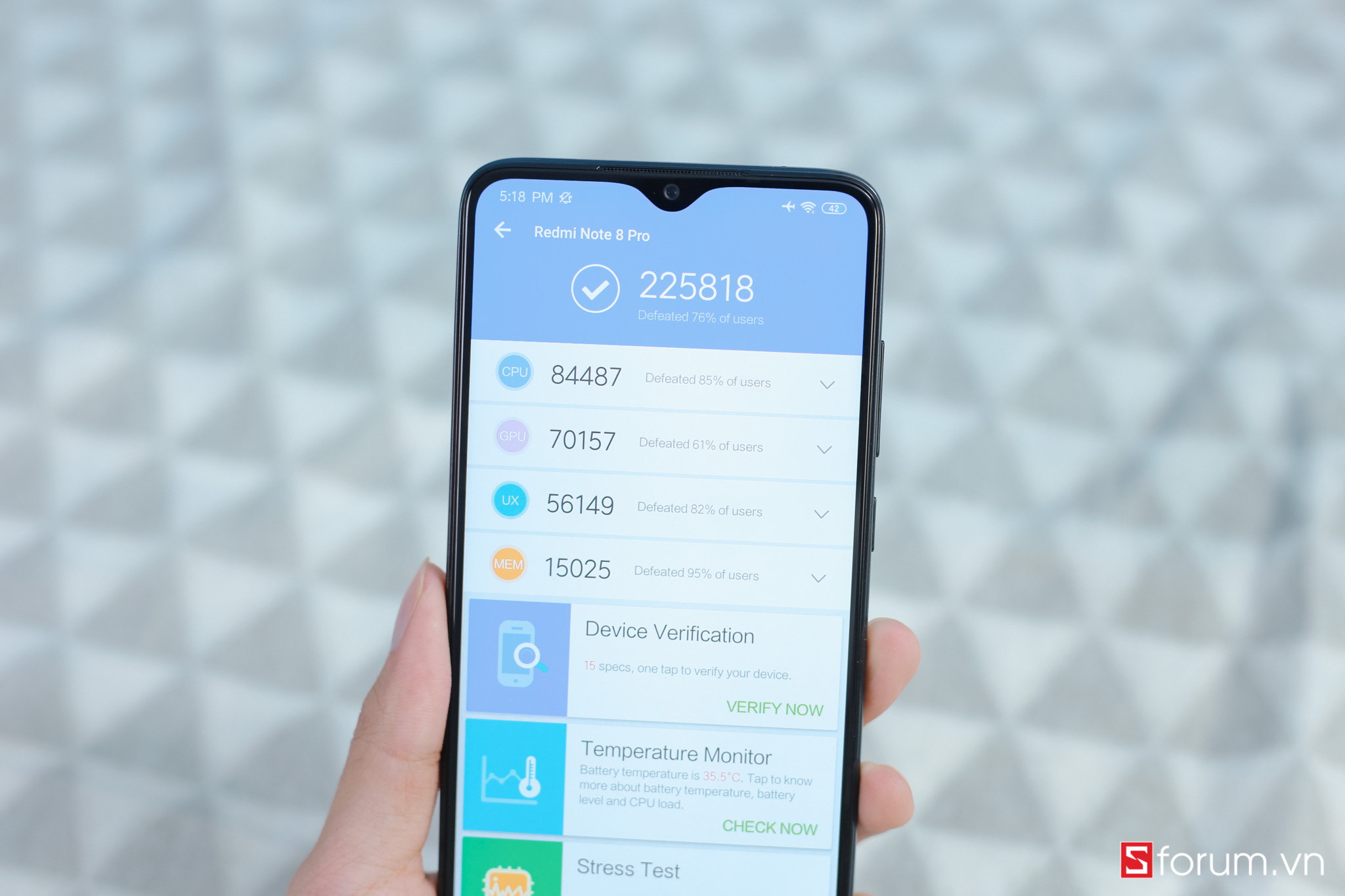 Currently, Redmi Note 8 Pro is being sold at a price of 5.5 million VND for portable goods. In the near future, the genuine version will also officially be on the Vietnamese market at CellphoneS chain stores nationwide with super reasonable prices. Readers interested in the product can register to receive Redmi Note 8 Pro information at the link below to not miss any attractive promotions.