And then there’s Nomad: Megalo Box 2, which is kind of laughing at everything else and contentedly doing its own thing.  Forget the Super League, Nomad doesn’t need the help of a bunch of greedy billionaires and a fixed system – it just does it better than anyone else.  It’s no disrespect to anime to say this series isn’t really like an anime, because there aren’t many like it in any medium you could choose.  I could ask nothing more from the first three episodes of a series, which is all the more remarkable given that I was skeptical about this one’s need to exist in the first place. 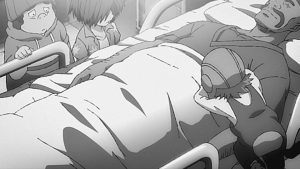 What’s most important about this series is without question that it’s beautifully written and (albeit not lavishly) produced.  But I don’t think it can be overlooked that it’s mercilessly condemning the treatment of immigrants in Japan.  That’s a subject that’s normally taboo (they have a lot of those here), and unsurprisingly, given how much the country has to be ashamed of in this respect.  Maybe it’s the fact that it’s dressed up as a story about the immigrant experience in America (which is fair game too, no question) that’s allowed this premise to survive to production.  I wouldn’t be shocked if the people who’d be most offended by what this show is about are incapable of realizing that they’re being played. 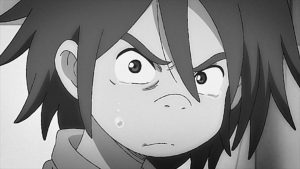 What’s hard to dispute for me is that Nomad has thematically raised the bar from Megalo Box in every sense.  This is a subtler, more reflective, more somber story – a much more “grown-up” version of what was already a very mature and nuanced premise.  That it so little resembles any conventional anime is unsurprising given that the writers are not anime writers – they work in films and TV drama.  That includes Shinya Shokudou, which is a series (albeit based on a manga) which is similarly focused on the forgotten and disdained in society. 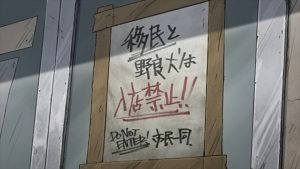 I had only one real criticism of the first two eps, in fact.  That was Joe seemingly kicking the opiates far too easily – and I fully retract it, because Nomad had that covered.  Joe’s withdrawal is ongoing and crippling, and it’s a process that Chief has gone through himself after the death of his son.  We still don’t know what happened with Joe’s downfall, but Nanbu’s appearances are obviously Joe’s guilt manifesting itself with the aid of his withdrawal.  Nanbu was clearly sick, and it seems as if Joe asked him to train him anyway – perhaps “one more big shot”.  Did the overwork cause Nanbu to die sooner than he would have – and this is why Sachio blames Joe?  Or is there more to this than that? 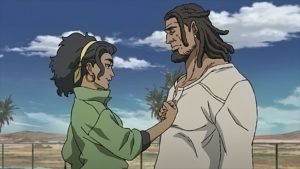 Clearly we haven’t see the last of Sachio, because in order for Joe to move on he needs to make peace not with a ghost but with a living piece of his past, and that’s Sachio.  Chief is making his peace by trying to single-handedly save his village, so he can use all the help he can get.  His reveal to Joe about the theme of his saloon ballad – a call to the restless souls of the dead to return home – only solidifies the impression that was left when Joe had his wolf encounter in the desert.   The implication is almost as if Joe is already a ghost himself, which certainly doesn’t bode well for his prospects with the ending (which haven’t looked too good all along, to be honest). 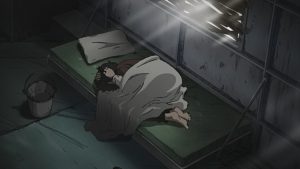 As a trainer, Joe is exactly what Chief needs.  He knows the ins and outs of these tournaments, and basically counsels Chief to play rope-a-dope for as long as he can and try to save himself for the final match.  But Hikawa’s unnerving calm as Chief rolls through his first match shows that he’s not about to leave this up to chance and Chief’s skill.  It starts with nasty graffiti, moves on to sabotaging water pumps – and in the end, as it always does in these situations, escalates into violence.  I can’t imagine Chief is going to come out of that burning trailer unscathed, but whatever the case what’s happening now is effectively a war. 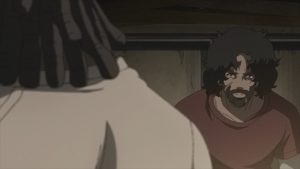 In a country where immigrants are routinely harassed, verbally abused, and exploited, this is a very edgy course for Megalo Box to take.  And with the country it’s superficially based on undergoing its own rise in white nationalism and anti-immigrant terror, the timing could hardly be more apt.  But in the end, Megalo Box 2 is only as good as the story it’s telling – and even just focusing on the character side that story is already masterpiece material.  It makes such a huge difference when a series comes from someone who clearly has something to say – that alone doesn’t elevate it to art, but it’s pretty much impossible to get there without it.