Mushoku Tensei remains a strange sort of experience, though not an uninteresting one.  Frankly it seems to be more of a when than if situation with regards to it losing me, and as I noted some of the chatter about this episode I thought this might be the week.  It’s not – the things that will eventually drive me away, if I am, are not the things that people were buzzing about this week.  They were present, though, with the intimation that  they’ll be even more so in weeks to come. 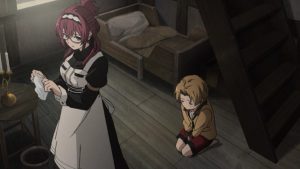 The whole business with Paul and Lillia was unsavory, certainly.  Maybe I haven’t been paying close enough attention but I honestly never thought Paul was this much of a dirtbag.  Its not so much that he slept with Lillia (such things are hardly rare, in another world or this one) but the aftermath.  That said I wasn’t especially fond of the way the series made it out to be have been Lillia “seducing” him, when in reality it’s far more likely that it would have happened just as Rudy suggested as he was throwing Paul under the bus – a man in a position of power taking advantage of a woman who works for him. 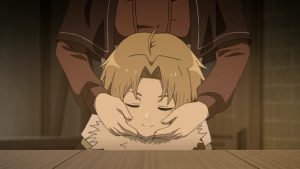 The genes of Mushoku Tensei – and the matter of what Japanese audience it strives to appeal to – shine through loud and clear.  We don’t really need to see all the women in this series masturbating, but we know why it’s in there.  We don’t need to see characters in ridiculous attire like Ghislaine, but we know why we do.  That’s ultimately what soured me on TenSura, a show I certainly never loved but which kept me modestly engaged longer than most of it’s clan.  The tail wags the dog – the tropes and cliches and pandering are ultimately the point, and the plot and characters are just there to fuel that engine. 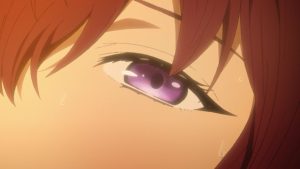 Mushoku Tensei is certainly nastier than TenSura, but perversely that’s part of its appeal.  I mean, on what planet does a father have the conversation Paul had with his seven year-old son?  That bothered me about him more than the philandering, frankly.  Rudy may be an evil genius but so far, he’s actually used his powers (in the timeline where we know him) mostly for good.  I get that we haven’t seen the true depths of Rudy’s depravity yet (I think his monologue about “raising” Sylph to be his perfect bride was by far his creepiest moment so far), and I suspect this series would be an epic fail if it didn’t have Sugita Tomokazu’s performance propping it up.  But it does, and it’s not (yet). 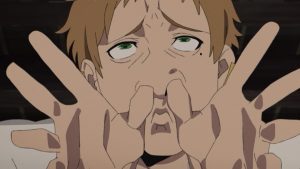 “Swagger” is the key word here, really.  Mushoku wears its nastiness like a family crest, and that gives it a sort of unpretentious honesty that love it or hate it elevates it above the vast majority of generic crap isekai shows out there.  It’s not going to be that nastiness that finally tunes me out, or even Rudy’s dark side I suspect.  It’s going to be the reliance on pandering that we saw more of this week and will probably only get worse as the series progresses.  I’d still like to be wrong, because it’d be nice to actually get through a whole one of these series and there’s a lot here that I find genuinely interesting.  But the other shoe is a size 23 Shaq special, and it’s teetering on the shelf.