For me, the eternal question that hangs over Mushoku Tensei is “will this be the one?”  Will this series be the isekai that manages not to burn me out after a handful of episodes, leaving me disinterested or worse?  Truthfully I don’t know the answer, and I don’t feel any closer to knowing than I did before I watched this episode.  There’s stuff here I quite like, and stuff that rubs me the wrong way in a battle fatigue sort of way.  But I guess that’s a positive indicator as much as a negative in this context.  No news is good news. 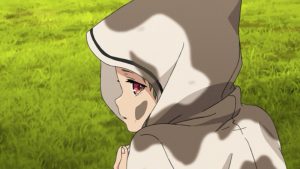 One thing that I’m not dancing with joy about is that we seem headed for a moeblob of the week (even if they stick around longer) thing, a trope from these sorts of series that I’m not in love with.  After Roxy’s departure comes Sylph, a green-haired elvish-looking child who Rudy must be the only one in the world not to immediately recognize is a girl.  It certainly didn’t have me thinking otherwise for a moment, which left the whole pretext of the episode feeling kind of manufactured. 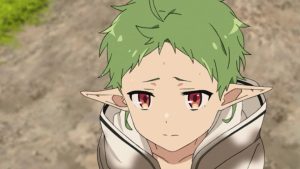 There’s nothing specifically wrong with Roxy or Sylph really – they’re fine for what they are, but their role in the story speaks to the kind of tailor-made for gratification quality that leave most isekai seeming fundamentally false.  Where this ep kind of redeems itself is Rudy using his own experience as a bullied child – and the courage he learned from Roxy – as motivation to come to Sylphiette’s aid when she’s being harried by the local pre-pubescent punks.  That, and the conversation he has with his father when Paul assumes Rudy is in the wrong when one of the bullies’ mothers complains to him, and doesn’t give Rudy a chance to defend himself. 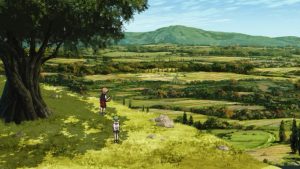 That confrontation was easily the most interesting part of the ep for me, because that felt as close as any moment in the first three episodes to seeing the real Rudy – the Rudy as he is now, an amalgam of his old and new lives.  Paul is not stupid by any means but he’s hardly a towering intellect either, and it’s a simple matter for Rudy to manipulate the situation.  And as he says, Rudy is in the right here.  But it’s an odd feeling for the father, who knows he’s being worked by his own child in a way a child Rudy’s age shouldn’t be able to work him.

Ultimately the saving grace of Mushoku Tensei, though, is mostly the same as it always is (so far) – it’s very easy and confident in its manner.  “Authoritative” is a word I keep coming back to, and it really fits.  The tropes aren’t intolerable because we’re not beaten over the head with them, and the events of the story are allowed to play out in an unhurried way without much attempt to sell us anything.  It’s as if the series is saying “I know I’m the real deal, so why should I bother trying to prove something so obvious?”  I have no idea for how long that’s going to be enough to sustain me, but I remain very curious to find out.