Currently, Minecraft is upgrading for free to play on PlayStation VR (PS VR). Expected, the game will appear on PS VR later this month. Developer Mojang Studios announced in a blog post.

Fans have been asking for Minecraft to appear on PS VR for a while now. Because the game is already available on different virtual reality platforms. However, on the PS VR Sony has yet to be focused and released. The upgrade will come out to be available for free download later this month, Mojang said. According to the company information: Those with Minecraft on PlayStation 4 will receive the version to download. Just press download and you will access the new Minecraft VR function. And of course, you need to build your PS VR.

Developer Mojang shared a screenshot of Minecraft in PS VR, as below: 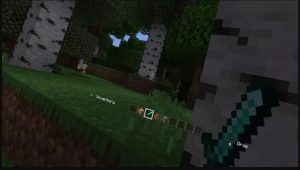 With the PS VR version of Minecraft it will be similar to the Minecraft you play every day on PlayStation 4. Nothing gets deleted and changed. And there will be a little change in graphics, images to better match the PS VR version. One point worth noting, players can still use the PS4 controller and perform the action while looking around using the PS VR headset. When playing, you will be able to choose from two modes Immersive and Living Room.

Minecraft continues to be hugely successful, albeit for more than a decade. Earlier this year, Microsoft, which acquired Mojang in 2014, said game sales now hit 200 million across multiple platforms, with usage spikes occurring during a pandemic. .

Source: According to The Verge

Post Views: 81 In the framework of the recently concluded CES 2020, Asus announced a huge new version of Nvidia RTX 2070 graphics card, specially designed for the innovation of mini gaming computer. Intel, called RTX 2070 Dual Mini. To be able to be used in a compact device, Asus GeForce RTX 2070 Dual Mini […]

Post Views: 64 Exposure latitude testing is a tried and true method of building an understanding of an imaging system, whether it’s film or digital. Sony F900 Recently I’ve had conversations with a number of cinematographers who were unsure about how to interpret exposure latitude tests because so much focus in recent years has fallen […]

That “BBS wheel” was made in Toyama! We are surprised at transcendent “forging” technology!

Post Views: 168 BBS wheels are not expensive at all! My name is Mario Takano, a car writer. Car lovers are well aware of the driving performance benefits of high-performance, high-quality forged aluminum wheels. For the aluminum wheels of my car, I want to choose the best things possible, even if the design is important. […]