The climate change situation and the negative effects it has become have become a global problem in the last few years. The trend of sustainable development, in harmony with nature is gradually spreading, becoming a standard concept of mankind, and the field of technology is not out of that trend.

We all know that technology also contributes a significant amount of CO2 emissions causing greenhouse effects, especially in research and production activities. While a number of major technology companies have pledged to meet the carbon neutral standard by 2030, Microsoft today made an ambitious promise to actually become the first carbon negative certification business on world.

In fact, Microsoft has been certified carbon neutral since 2012 – one of the leading technology businesses in building environmentally friendly production lines. Therefore, moving towards a negative carbon certification – 100% of which does not release CO2 into the environment – is a long-term future goal that needs to be carefully planned and if successful will spark a green revolution. actually in the field of technology production in particular and the whole world in general. 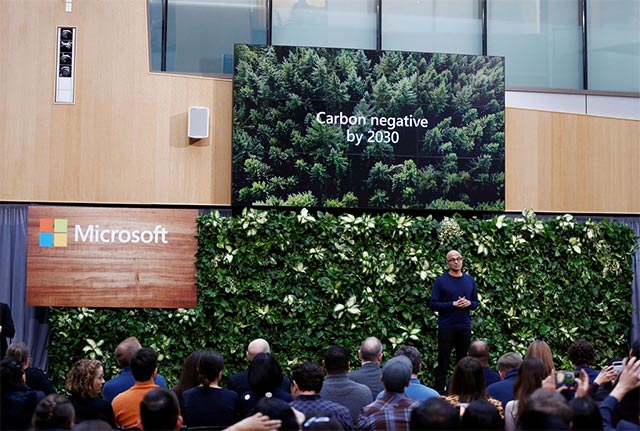 Microsoft’s current plan is to remove as much CO2 as possible from the production line, and the roadmap is that by 2050, the company will completely recreate the carbon it has emitted to the earth since its inception. in 1975.

Microsoft has outlined 3 different ranges of CO2 emissions. The first is the CO2 that you directly generate, like the emissions from your car. The second is indirect emissions, such as the power source you use from coal-fired power plants. Finally, it is also indirect emissions, but from the other activities you do, like carbon emitted from the production of products you buy. Of course, Microsoft is targeting all three of these categories.

According to calculations, Microsoft will release 16 million tons of CO2 in the environment this year, 100,000 tons in scope one, 4 million tons in scope 3 and 12 million in the final range. As such, it is clear that the third range will be prioritized first.

This is undoubtedly one of the most ambitious and difficult plans that a private company “dares” to cope with to solve problems of CO2 emissions, or climate change. Not only does it aim to become the world’s first negative carbon business by 2030, Microsoft is also committed to paying off its “debt” – eliminating all of the carbon they’ve emitted into the environment since was founded – in 2050.

Microsoft is truly becoming the leading flag in the movement to promote a sustainable, environmentally responsible model in the world of technology.