It’s been clear for a while where Mashiro no Oto was going to end.  What the last few episodes have served to remind us is that – as is so often the case with adaptations that don’t check the fashionable commercial boxes – what we’re seeing is effectively the prologue of the story.  One-cour anime of these manga (especially seinen, jousei, and shoujo) basically end at the beginning.  It’s nice advertising for the manga I suppose, but frustrating as hell for an anime viewer, especially as most of these series (including Mashiro) aren’t licensed in English.  For all its warts, there’s a lot of interesting stuff in this series that’s going to be left hanging in anime form. 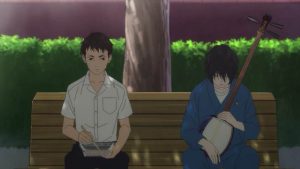 The whopper this week, of course, is the revelation that Kamiki Ryuugen is in fact Setsu’s (and Wakana’s, presumably) father.  That’s quite a bomb to drop but I had at least a mild suspicion it might be the case, with Setsu’s parentage being so little-discussed.  We know the relationship between the main players – Ryuugen is Umeko’s ex-husband and Souichi and Mai’s step-father.  What I’m curious about is his relationship to Seiryuu (who also shows up, for the same reason).  They both bear the name “Kamiki” so are both scions of the Kamiki School – but Ryuugen seems to be the head.  Are they fierce rivals?  Is Seiryuu a disciple of Ryuugen? 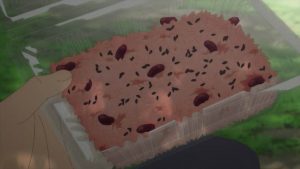 The conversation between Ryuugen and Umeko was truly disgusting – I totally echoed Wakana’s reaction here.  Frankly these are both awful people.  Neither give a damn about their son’s growth as an individual – to them he’s both a commodity and a weapon to be used against the other.  We’ve only just met Ryuugen but we also know by inference that he totally dismisses his step-children’s worth as artists, despite the lip-service he gives to Souichi’s talent.  Wakana bears a huge burden (especially as he’s under 20, which remains hard to believe) – it’s totally on his shoulders to protect his brother from both of his parents, and shepherd him through his artistic development.  Setsu is lucky to have him, that’s for sure, but at least he seems to realize that. 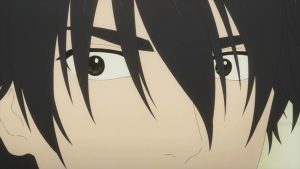 I’m still not totally clear on whether Setsu knows the truth of his link to the Tanuma siblings, though it’s very obvious they’re unaware of it.  When Kouta spilled the beans about Ryuugen, Setsu seemed more angry than surprised, yet he earlier seemed to act as if Souichi was a stranger to him.  Ryuugen’s intent to have Setsu inherit the Kamiki name seems to imply that he considers neither Seiryuu or Souichi worthy of it – though he may simply wish to favor his own DNA, even if the Kamiki School doesn’t recognize it as a factor. 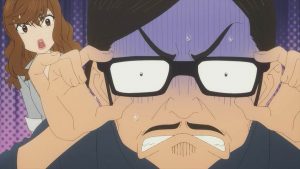 As for the individual competition, Umeko has cooked the books to get Setsu a spot almost at the end – though her influence apparently wasn’t strong enough to deny one to Souichi (or more likely she thought that was be too obviously tampering).  That leaves the morning session pretty much to Arakawa Ushio and Kaji Takaomi, as the rest of the players are strictly zaku.  So are these two if we’re honest, though they are an interesting contrast stylistically and contenders for third place.  After a string of thoroughly mediocre performances (did the anime get mediocre players to dub those, or did Yoshida Brothers dumb it down?) it’s Arakawa who takes the stage first. 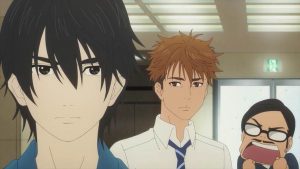 These two are good narrative foils, as Ushio is a complete showboat tailored for solo performances and Takaomi is a guy whose strength is seamlessly meshing with an ensemble.  Obviously that makes this competition easier for Arakawa, though I didn’t find his performance especially impressive.  Basically this is musical masturbation, and while it’s nice to see a performer enjoying himself that’s not the same as a sensitive artistic statement.  As for Kaji, it’s as Seiryuu describes it – “a good kid trying to be rebellious”.  Snapping a string is a tough break, but honestly he wasn’t making a huge impression to begin with.  The real headliners are still to come – and given that we’ve not been treated to actually hearing Souichi play, I’m looking forward to his performance almost as much as Setsu’s series-closer.