Mashiro no Oto is a funny old series.  Despite so many elements of it being quite pedestrian, I would never remotely consider dropping it.  Where else are you going to get the satisfaction it provides, if you love stories about creativity?  It’s not enough simply to be a series about music – you have to understand both the subject and how to go about portraying it.  I don’t know where the line between the manga and adaptation is, both in terms of the good things and bad things in the writing.  But I do know that as an anime, Those Snow White Notes just gets this subject in a profound way. 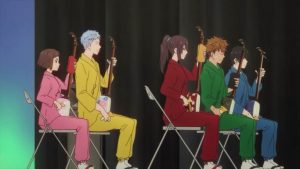 Am I an expert on music?  No.  On the shamisen?  Even less.  If you asked a hundred random Yanks about either one I’m confident I’d fall in the top half.  In terms of my love for music and knowledge of its history, comfortably so.  But I don’t really understand music theory, I can’t read a score, and while I can (barely) play a number of instruments my skill on none of them (apart from perhaps the taiko) exceeds the beginner level.  So the fact that the distinctions in these performances are so clear to me – and that I’m 100% aligned with the narrative – tells me it’s doing a brilliant job in depicting them. 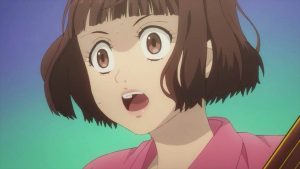 Setting aside the third key ensemble of the competition, Billiken (we’ll return to them shortly) Mai and her water-carriers form a fascinating contrast with Umezono, and Mai with Setsu.  Mai is surrounded by top youth performers, yet she devises a program to highlight her own virtuosity.  Setsu is surrounded by rank amateurs (well, thee of them and one modestly experienced player) and he devises a program to highlight the group.  He recognizes the truth of the matter – if Umezono is to shine, he needs to “cushion” the others.  He needs to use his prodigious ability and relative experience to hide their flaws and highlight their strengths.  And my goodness, he succeeds. 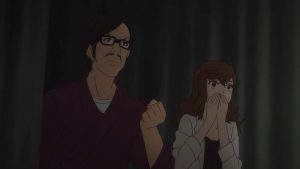 Proving my own neophytism, I had never heard the term Nagauta until today.  Nagauta is the music of kabuki and bunraku – and occasionally rakugo, which makes it a perfect fit for Rai.  This was the “interesting” twist Setsu teased last week – one of them anyway.  He also sets the performance at a faster tempo, diminishing the disorienting impact of the speakers and making it easier for the green Yui and Shuri to keep up.  And he has Kai, in whose hands he’s placed Kamiki’s exquisite shamisen, pound the hell out of it early in the piece so the audience can appreciate its magnificent sound before it goes out of tune. 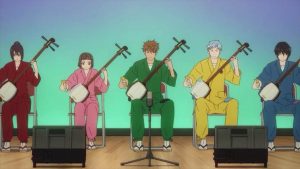 It’s a crowd-pleasing performance – so much so in fact that it generates spontaneous applause while still underway.  Wakana (is he seriously under 20?  Seriously?) notes that this is exactly what he hoped to see, his brother supporting and leading his lesser-talented teammates.  Yet it frustrates him too, because he wants to see Setsu hammer the world into submission with his genius.  Mai and Umeko are displeased, but they’re always displeased so who gives a fuck.  “Playful” is the word tossed around here, and it fits – this is a joy to listen to in a very different way than the prior ensembles’ efforts. 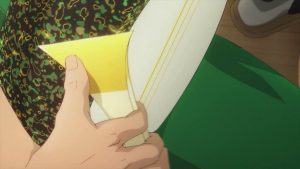 Going in, I didn’t expect Umezono to win (it makes no sense at this point in the narrative), and as good as they were that expectation didn’t change.  Competitions like these aren’t (or shouldn’t be) popularity contests.  As regards Billiken, what I said after hearing their performance was that it “stands out among a rash of bland modernized takes on Jongara Shinbushi that make little impact.  It’s a little sterile but tight as a drum – by far the most elegant and precise group performance we’ve heard over the course of the series.”  It’s easy to dismiss that sort of performance but it’s an achievement, and the sort that panels tend to eat for lunch.  And Umezono and Aichi both had significant (if contrasting) flaws. 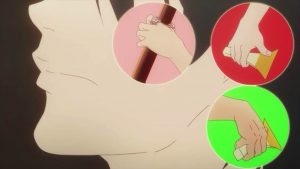 There is a question as to whether competitions should be part of music at all – indeed Setsu hints at it during this episode.  There does seem to be something intrinsically contrary to the nature of artistic expression in them, but they’re a reality of the business.  And Setsu is going to be exposed to an altogether different sort of pressure as he engages in the individual competition, which for all intents and purposes is really a two-man event with he and Soucihi.  His grandfather rejected this sort of thing (which irritated the always-irritated Umeko no end).  It’s going to be interesting to see what Setsu’s view on them is as he seeks to forge his own path, honoring Matsugorou without imitating him.