I’m seeing a lot of hate piled on this episode of Mashiro no Oto, and that surprises me a little.  Given all the caveats you have to apply with this series, I thought it was quite good.  For a show that’s better at music than anything else an episode this music-driven would figure to be a strong one.  And for me it was, and even if the other parts were (as ever) not on the same level, I’ve seen a lot worse from Mashiro already.  Different strokes I guess. 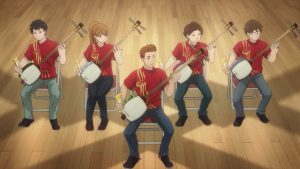 Without any question, the supporting cast isn’t an especially strong one here.  The brightest spot by far is Wakana, whose relationship with Setsu towers above any other in the series.  He knows his brother better than anyone, and sees the good in him that others are blind to.  But Setsu’s clubmates are a pretty cookie-cutter bunch, so the delving into their backstories is generally pedestrian.  Yui’s angst, Shuri’s terror, Kai’s daddy issues – none of it is exactly compelling.  And the efforts at comedy tend to fall pretty flat.  But it wasn’t bad this week, at least for me.  They were actually acting like normal people might act under the circumstances at least, which I thought was progress.  I just wish they weren’t such archetypes. 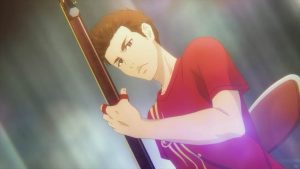 But the music…  I can’t stress enough how good the music in this series is.  And not the music itself being good, but the way it’s depicted both visually and aurally.  Of course much of the music is very, very good.  But only when it’s supposed to be.  None of what we hear is awful – all of the pieces are played in technically competent fashion.  What Mashiro no Oto does astonishingly well is communicate through the performances which pieces are exceptional, which are good, and which mediocre – and well enough that even a layman’s ear can appreciate the difference.  If you think that’s easy, it’s not – I would say it’s spectacularly difficult. 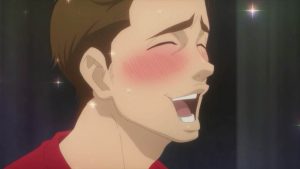 Among what we heard this week, I saw a common thread between the two standout performances.  Arakawa Ushio’s Fukuoka team and Tanuma Mai’s Tohoku team were both somewhat undercut by the fact that they were transparently showcases for one soloist rather than true ensembles (naming the group “MaiMai and Friends” was a good clue).  But while Ushio with his “Arakawa twang” gave a pleasing and flashy performance, it was clear than Mai and her group were better (even if Souichi – “it makes my ears hurt” – didn’t care for it).  She herself was the better soloist – more expressive and interesting – and her support players were better integrated into the performance. 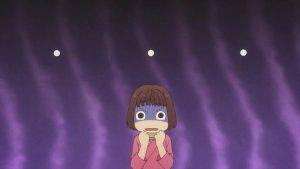 I have to say, I really loved that performance – and I don’t especially like Mai as a character.  That was modern in the best sense – clearly distinct from the traditional sound we’ve mostly heard in this series, with a thrilling drive and energy.  The shamisen is wonderfully suited to more modern forms of music and those who explore the possibilities of that are to be praised for it – even if the establishment in the undoubtedly narrow world of competitive shamisen probably finds it distasteful (maybe even Mai and Souichi’s father). 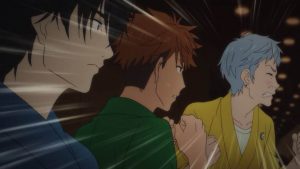 While the noobs in the Umezono club are justifiably intimidated after hearing Mai’s performance, for Setsu it’s just motivation.  So much so in fact that he tells Rai – and only Rai – that he wants to try something “unorthodox” for the performance.  I’m very curious to hear what that is, and I imagine after all this build up the Umezono performance won’t fall flat.  Their best chance to actually win, I would think, would be to give the judges the traditionalist counterpoint to Mai’s modernist take.  But I rather expect Mai’s team to win here, with Setsu going head-to-head with her brother for the individual crown as the adaptation’s climax.