The one question that keeps going through my mind with this series is “why?”  Why is a series capable of such highs equally capable of shooting itself in the foot?  Why do certain characters have to intrude on what could be a truly captivating story (and often is) with their awfulness?  And most immediately, “why didn’t you just end the episode when the credits started rolling?”  As I said last time, I can tell Mashiro no Oto is going to be one of those shows that just drives me nuts. 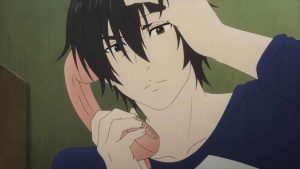 That said, I’m covering it.  This episode clinched it for me despite my reservations, because any series that can do what this one does is too valuable a commodity to ignore.  It isn’t simply a matter of hiring the right musicians and letting them do their thing, though that’s certainly crucial.  It’s making the music as front and center as it is in the narrative.  It’s animating the shamisen playing with an almost unbelievable level of realism given the seeming budget for the series.  And most surprisingly given how irritating it can be, it’s the way the writing intrinsically understands the role music plays in our lives (especially memory).  That shit don’t just grow on trees. 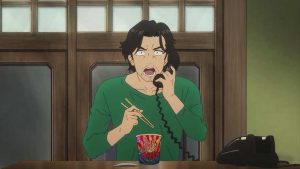 The struggle of Setsu to find a way to make “Shungyou” his own is as universal as anything could be, given that it’s something only a gifted artist could truly understand.  And Kamiki-san is most certainly that – and he’s easily seen through Setsu’s intentionally clumsy dressing room performance to the true talent underneath.  When he talks of bringing the boy out of his shell, one senses that this is something he intends to take a part in – a natural instinct, perhaps, of a musical genius to cultivate the genius he sees in others.  Perhaps, too, there’s a sense of responsibility towards Setsu’s grandfather, who the entire shamisen community seems to revere as a near-God. 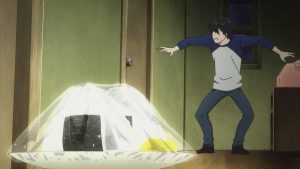 Cassettes weren’t as passé at the time this material was written as they are now, so I wonder if that dialogue between Setsu and Kai was added for effect.  Even in cassette form that performance was, even to my untrained ear, phenomenal.  It has to be, to provide a contrast to what Setsu will do later in the episode.  This all gives a good sense of the trap Setsu is in.  He idolizes his grandfather personally and musically, but the man’s genius is a trap from which Setsu must escape if he’s ever to become a true artist himself.  This was covered quite brilliantly in Star Trek: The Next Generation with Data’s attempts to become a violinist.  He could mimic any style from Heifetz to Perlman, but he fundamentally lacked the ability to create something that represented himself.  And to be a true artist, that step is not optional.

After a brief practice session at the shrine, which introduces us to Setsu’s neighbor Nagamori Rei (he’s the son of a rakugo performer, and this being Yanaka one supposes a lot of traditional artists live in the area) the focus turns to Setsu performing at the nursing home for Shuri’s grandmother.  This was a bit of a minefield, to be honest.  Not only was the performance itself a tightrope to get right, the potential for maudlin hokiness definitely existed here.  But those mines are avoided – the old woman’s memories are handled with dignity and restraint, and Setsu’s Shungyou is both beautiful and recognizably incomplete.  As Kai notes, Setsu has simplified Shungyou radically in order to be able to perform it, because it’s the only way he could perform it. 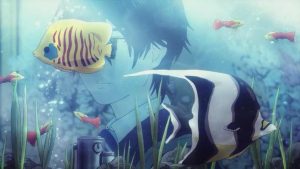 In a way, the story of the blind young shamisen player wandering Japan during the war and going on to be a legend sounds like an even more interesting premise than the one we’re getting.  But seeing it this way is still pretty darn great – fascinating and moving.  Grandma doesn’t effusively praise Setsu – she notes that this was not what she heard in that storehouse when she was six years old.  But like Kamiki she recongizes the soul of the performer through the performance, even if what he was performing belonged to someone else.  The two connected, she saw what she longed to see, and both of them got a certain amount of closure and can move forward in their lives (albeit in very different stages of those lives). 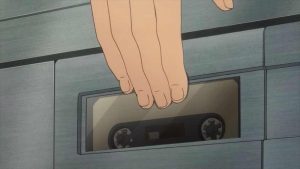 Would that the ep would have ended there – I’d have called it a classic.  But Ume rears her beautiful and ugly head over the end credits, reminding us both how obnoxious she is and how she moves the story in contrived and silly directions.  And that was just as I was forgetting how much I’ve come to dislike Yui, who responds to Kai’s perfectly on-point criticism of her by going violent on  him.  Stuff like this feels like it’s from a completely different show, and that such tropey and irritating characters and material can exist alongside near-transcendence is one of the peculiarities of Mashiro no Oto.  I’ll take the bitter with the sweet, because the sweet here is such a memorable flavor, but I sure wish we didn’t have to.