I can already tell that Mashiro no Oto is going to be one of those series that drives me nuts with its highs and lows.  When three episodes in a row have moments (and characters) that are outright groaners but also some among the best of the season, the die is pretty much cast.  What can you do but tag along and take the bitter with the sweet?  I never say never, but it’s hard to imagine ever dropping this series when it can move me the way it already has. 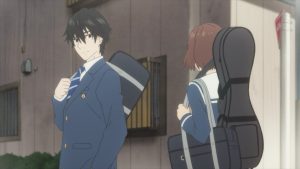 The annoying character problem is a very real one, as there’ve been at least four by my count already.  Umeko is the most obvious though at least she’s a lot better when she’s singing rather than talking.  The teacher Keiko-sensei is a real dumpster fire, clearly supposed to be comic relief but just fingernails on a blackboard.  My hope is that she’s a minor presence – but that makes Yamazato Yui a bigger concern.  As Shuri’s best friend she figures to be a major presence, all the more so after the events of this week. 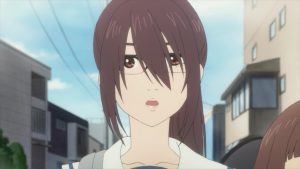 The running theme with these characters is that they’re very tropey, very cliched.  Yui is a prospect we’ve seen in anime many, many times -= the overprotective man-hating shotgun rider of the pixie heroine (and Shuri certainly fulfils her role in that sense.  Is she interested in Shuri romantically or just abusively proprietorial?  Too early to say, but not too early to be annoyed.  That’s why I took such pleasure when Setsu told her “Talk to me when you’re interested yourself” and walked off when she ordered him to join the Shamisen Appreciation Club.  It was exactly the right response in the right measure from his character. 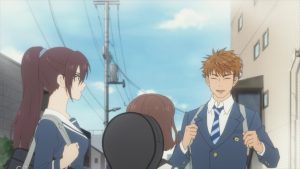 But…  Here’s the thing.  As soon as the music starts, Mashiro no Oto becomes transcendent.  In fact even before and after, because when music is the language it’s using to communicate the character drama this show becomes positively eloquent.  The music sequences themselves are flat-out bangers, don’t get me wrong – these are amazing performances.  And not only that, they’re so well-animated.  The only downside is one can watch the first 15 minutes of this episode and clearly see the budget is far from unlimited.  They’re doing as they should and saving it for the scenes that matter, but some of the non-musical material is pretty rough – off-model characters, wonky movements. 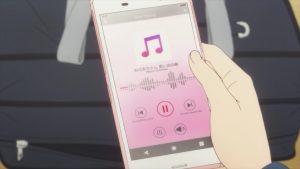 The MacGuffin, for the first arc at least, turns out to be Shuri’s Grandma.  Shuri is listening to her grandma humming an old tune from her childhood during the war on her phone when the teacher causes a scene and embarrasses the hell out of her.  This is abominable behavior from the teacher (and I’ve seen that it’s not uncommon in Japanese schools sadly, though the bully teachers seem to prefer attacking the boys), but the upshot is Setsu hears and realizes the old lady is humming his grandfather’s “Shungyou”.  You know, the piece he begged the old man to teach him, to no avail. 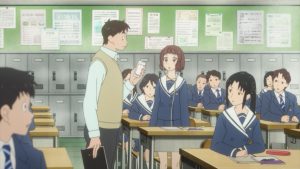 If we’re honest this is a pretty contrived scenario and a huge coincidence, but even I have to admit there’s a lot of dramatic potential in it.  Also a coincidence is that the shamisen left behind in the clubroom belongs to Ogata Kousuke, stage name Kamiki Seiryuu – the man who defeated Wakana in his most recent competition.  Kamiki is a well-known professional about to play a concert in Tokyo, and Keiko-sensei arranges for a meeting afterwards to seek his permission to use the instrument (and because she has the hots for him).  He’s fine with that – he says he left it there hoping someone who recognized its value would find it.  But once he discovers who Setsu is, he more or less demands to hear him play. 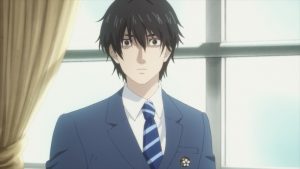 Once more this last musical sequence carries the episode, and it’s a fascinating one.  Kamiki’s performance on-stage is melancholy and beautiful, while Setsu’s is virtuosic but “insipid” as Kamiki calls it.  Am I a keen enough listener to pick up on all that?  No – but I can hear the sadness in what Kamiki does and the fact that Setsu is more or less just speeding through the notes.  It all comes down to having a reason to play – and that’s definitely a major theme of Mashiro no Oto, both here and going forward.  I feel certain there will be great moments and cringey ones along the way – all you can do is hope the former outnumber the latter.