I’m used to singing the praises of anime hardly anyone else is talking about.  Hell, I don’t think there are many people more used to it.  But Mars Red is really on another level.  Even quirky stuff like Odd Taxi is generating some buzz this season, but – with the notable exception of the comments here – there’s pretty much nothing being said about Mars Red.  Not that I’m seeing anywhere, anyway.  And its aggregator scores are laughably low on top of that.  There’s no accounting for taste to be sure, but that doesn’t mean we have to like it. 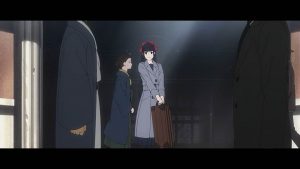 This show does so many things well that you’re going to get a few elements that stand out in any given week.  This time it was the determinedly unconventional narrative structure, and the cast.  With last week ending with a hell of a cliffhanger, we jump back in time.  Misaki’s backstory had been hinted at for much of the narrative, but the blanks were filled in here.  What happened to her isn’t too far off from what I was guessing, but it was still laid out in beautiful fashion. 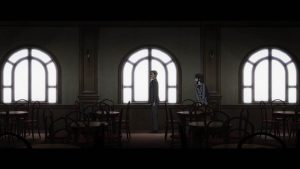 For starters, Misaki is emotionally estranged from her father – sensing the darkness surrounding him without understanding the cause.  That’s why she elects to stay at the Imperial Theatre rather than live at home, despite that home being only as far as Akasaka – there’s nothing for her there.  Deffrot – the troupe’s top draw with his boyish charisma and exotic blonde hair – is none too happy to have her intruding on his attic sanctuary.  Especially because she’s determined to treat him as the child he appears to be, until he opens his mouth.  But slowly, with her directness and lack of artifice, Misaki wears down Deffrot’s resistance. 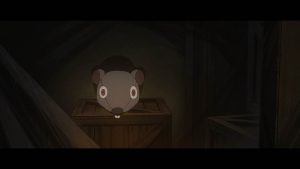 I keep harping on how good the cast is here, but that’s only because it’s true.  And Sawashiro Miyuki is a genius when it comes to roles like this.  She can go big without overacting, which is a skill many actors struggle with (not least voice actors).  Deffrot has to have a presence that belies his appearance, and what’s more he has to have a persona that contains both charm and a hint of menace.  He has to be a good actor too, which means his seiyuu must be when she’s playing those scenes.  Sawashiro was born for theatrical roles, and Deffrot is right in her butter zone. 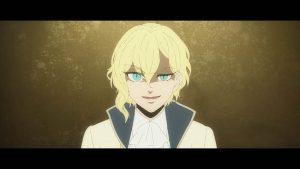 It’s Deffrot who effectively gets Misaki the lead in Salome (and eventually opposite him in Romeo and Juliet) with some outstanding coaching.  There’s a line of dialogue here that’s one of my absolutely favorites of the season – “You play Salome knowing how the story ends.  So, it rings false”.  Misaki’s Salome even after a level-up is nowhere near as good as Sawashiro’s, but it’s good enough to get her the lead.  That sends her home to her father’s house to try and leave things on a good note as she’ll be busy for a good while, and she has the misfortune of hearing a conversation she was never meant to hear.

It never seemed likely to me that Deffrot turned Misaki out of hunger or cruelty, so the truth of how it came to pass doesn’t come as a huge surprise.  We shouldn’t romanticize him too much – he’s obviously still a very dangerous person – but Deffrot is no rampaging animal.  He seems to cherish his quiet existence in Tokyo, and his interest in Misaki – and horror at what happens to her – seems genuine.  The life he gives her is clearly intended so that she can settle things with Maeda, meet the man she fell in love with through his letters.  And as we know, he took further steps to allow that to happen. 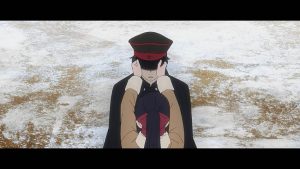 In the present moment, Deffrot once more involves himself in Maeda’s affairs.  Despite Yamagami’s sacrifice a mere human like Maeda never seemed likely to survive what had befallen him.  But rather than follow the dark path Gen. Nakajima chose for him, at least this way Maeda will likely retain some of himself.  Deffrot scolds him that he’s breaking his promise to Misaki, and that he expects him to clean up the mess Nakajima has created.  Most interestingly he tells Maeda that he won’t have Maeda leaving the stage “having stained our twilight years”.  It’s hard to imagine Maeda not turning against his old mentor now, and his unit become and outlaw force rather than an arm of the establishment.  That – along with Deffrot’s admonition – promises a very compelling second half of the series.