Many countries welcome the Libyan factions to elect a transitional government 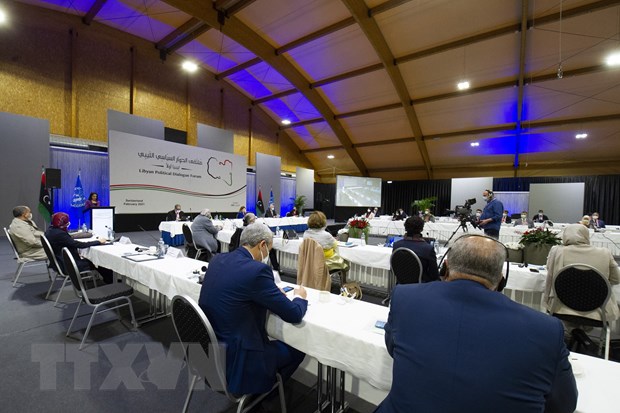 Saudi Arabia’s Foreign Ministry on Feb. 6 welcomed Libya’s election of the transitional government and expressed its hope that the move would result in the withdrawal of all foreign mercenaries from the North African country.

The Saudi Foreign Ministry’s statement stated that it welcomed the election of the transitional government in Libya at the Libyan political forum meeting in Geneva. Saudi Arabia expressed hope that this achievement will ensure the unity and sovereignty of Libya.

On the same day February 6, the Algerian Foreign Ministry expressed its welcome to the progress made in political dialogue in Libya under the auspices of the United Nations, thereby forming an interim legislative body.

Algeria affirms its willingness to cooperate fully with the interim government of Libya to achieve peace and stability, to meet the aspirations of the people, with a comprehensive approach, based on sovereignty protection, independence. and neighboring territorial integrity.

Previously, the Ministry of Foreign Affairs of Egypt on February 5 issued a statement welcoming the representatives Libya join negotiations in Switzerland mediated by the United Nations elected interim government with hope end conflict spanning a decade in this North African country through elections scheduled for the end of 2021.

Egyptian Foreign Ministry spokesman Ahmed Hafez affirmed Cairo wishes to work with the Libyan interim government in the near future until it transfers power to the elected government after the scheduled general election. on December 24, 2021.

In addition, Egypt also highly appreciated the efforts of the United Nations to sponsor the political process of Libya, and called on the regional and international parties to support the peace process and restore stability in the country. Libya.

In Libya, the supporters of General Khalifa Haftar in eastern Libya on February 6 congratulated the country’s people for the election of a transitional government to lead the country until the elections are held in December. .

On February 5, the United Nations-sponsored Libyan Political Dialogue Forum (LPDF) took place in Geneva (Switzerland) to vote for a Presidential Council of three people and a prime minister.

According to the United Nations, the Presidential Council has a mandate to unite state organs and ensure security until the election in Libya. The LPDF consists of 75 delegates appointed by the United Nations to represent the regions, tribes and political factions in Libya./.