Normally in baseball a two touchdown lead is going to be pretty safe.  Heck, in little league and (slightly more forgiving) middle school they even have a mercy rule (though as kids we always called it the “slaughter rule”) to end blowouts early – 3 or 4 innings in Little League, 4 1/2 or 5 in middle school.  But I’m not certain that’s going to be the case with Fuurin and Tsujidou considering the wild card their (assistant) coach just played.  And besides, winning by less than 10 runs is going to feel like a moral defeat anyway. 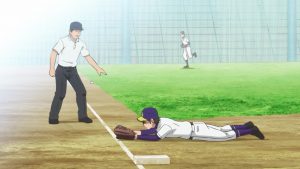 For starters, things are looking good against the Tsujidou starter, Oka-kun.  He’s basically a B-teamer (so is the catcher) but at a power school that’s normally still a stud, and he has a good fastball and slider.  The problem?  Daigo has figured out Oka’s “tell”, a common one among kids just learning breaking balls (and even some pros) – he drops his arm angle when he throws the slider, hoping to make it break more.  That’s why after three whiffs in the first, Fuurin goes to town in the second – starting with a Daigo double and an Anita dinger. 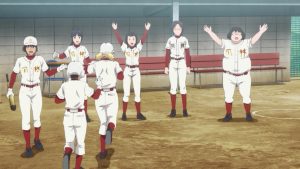 Daigo may be a child, but his understanding of the game is that of a baseball lifer.  A young boy acting as a coach is never going to be ideal, but if you were forced to choose one it’s hard to see how you could do better.  He knows the game and never lets his ego drive his decisions, and is always trying to keep his team on an even keel.  Fuurin is certainly much calmer than Tsujidou, who are going to pieces at being roughed up by a mostly girls’ team.  After Akira singles the bottom of the order seems to be coming down to Earth – for a middle-schooler it’s not so easy to hit a slider even if you know it’s coming. 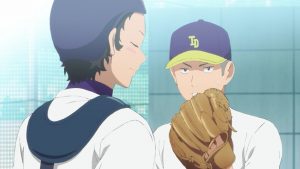 That’s when Chiyo steps to the plate and things get really interesting.  She’s terrified – understandable, as facing a 110-kph ball (even a rubber one) is a scary thing if you’re not used to it.  She’s also resigned to fail and clearly distraught at the prospect of being humiliated in front of her sister (never mind her crush).  Looks like the main reason Chiyo quit baseball wasn’t any specific trauma, but the general indignity of being surpassed by her little sister.  And especially, at having their father clearly focus his attentions on that imouto.  Fuji is a nice guy, but I could see him being tone-deaf enough to do that. 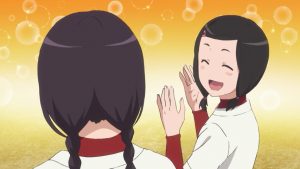 I give Goro a lot of stick for his fathering skills, and not without ample reason.  But at least he seems not to have abandoned Daigo as a prospect in favor of a clearly more talented older sister.  Daigo passes on the karma by reminding Chiyo of Oka’s pitch-tipping – she’d been too discombobulated to listen the first time – and Chiyo shows she actually has some natural talent by putting that knowledge to good use.  After a double and a walk the (assistant) coach has seen enough – he tells the ace, Mario, to get ready.  But Mario is too busy watching video of himself to pay attention. 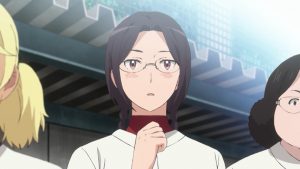 A couple of things are clear right away.  Mario is arrogant to be sure, and clearly feels this assistant coach is no one he needs to fear.  He may be a foreigner or half-foreigner, which would be a bit tropey but explain his non-Japanese appearance and name.  And he’s a kaibutsu, a beanpole of a kid who can throw 130 as a first-year.  Unfortunately for him (and her)  Mario’s first offering plunks Yayoi, but fortunately in a well-padded place.  That forces in a run, and leaves Daigo to face Mario with the bases still juiced. 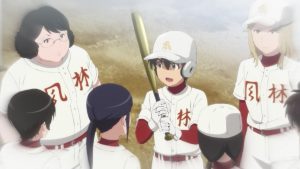 A hitter like Daigo can work with that if he knows it’s coming – a testament to just how much his confidence has grown.  Mario having his heat fouled off repeatedly by a chibisuke irritates him to the point where he shakes off his catcher repeatedly, refusing to give in and throw Daigo a breaking pitch.  Until the (assistant) coach intervenes, that is.  That ends things quickly enough, even though the catcher can’t handle the pitch, just as Mario predicted.  Daigo suspect Mario will put Fuurin’s scoring to bed at 14 runs and he may be right, but I’m more interested in what role Mario plays in the rest of the series – and in the hints this episode drops about the mysterious head coach’s connection to Fuurin…

Munō na Nana: Teenagers who have super powers against the “natural enemies”!

Post Views: 108 Square Enix recently announced Munō na Nana (Talentless Nana) manga series by Looseboy and Furuya will be adapted into anime on television. Looseboy also sketched a picture to celebrate the manga’s adaptation into an anime: This is a fascinating story, revolving around students who possess super powers. Earth is invaded by a […]

Online TV – All the Anime

Post Views: 95 By Jonathan Clements. This is the water that you are swimming in. In the last few years, the nature of television has undergone a drastic transformation, the implications of which is still playing out in all sorts of aspects of modern life. Are you still talking about the latest episode of your […]