If you could distill positivity into a TV series, I think it would look a lot like Mairimashita! Iruma-kun.

Unless you count the still-in reruns Kingdom Season 3, I believe this should be the last major premiere of the season for me.  If so, it’s feels quite fitting for it to be Mairimashita! Iruma-kun.  There are shows that will ultimately rank higher on my year-end list of course, but in terms of pure, unadulterated happiness this series is pretty hard to beat.  I made a big mistake dropping it from coverage during the first season, but a part of me actually feels like it wasn’t the worst thing in the world.  Blogging a series is a sort of work, and Mairimashita! Iruma-kun is so much fun that maybe it should be free of such connotations. 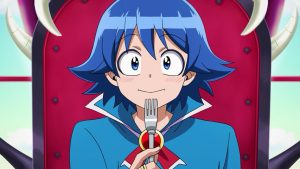 Happiness is a drug, they say.  But this series could wipe out drug use if more people knew about it.  This first episode flew by in about five minutes, and there was barely a moment when I wasn’t smiling or outright laughing.  From the moment Iruma-kun walked to school with Azz and Clara – a power trio that could rival Cream – the charm offensive was overrunning all defensive formulations and negativity was in a disorganized retreat.  Iruma is such a pushover that all you have to do is say “please” to render him powerless.  Yet rather than make him the subject of misfortune as a result of that as most series would, this one sees him rewarded for being an unabashedly good and kind person.  How radical is that? 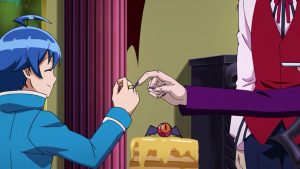 Could it get better, after last season’s finale complete with Valac family production numbers?  One of my core tenets in anime is that no series exists that can’t be improved by adding Miki Shinichirou, and not even Mairimashita! Iruma-kun is an exception.  Iruma’s Gluttonous Feeder Ring suddenly decides to start talking, and happily for us it’s using Miki-san’s voice.  He’s one of those actors who seems as if he’s been around forever (in reality only about 25 years), and by now has excelled in every type of role from the sober and dramatic to the utterly madcap.  This is definitely closer to the latter, and listening to Miki obviously having fun with a part where he can really cut loose just adds to the fun overload. 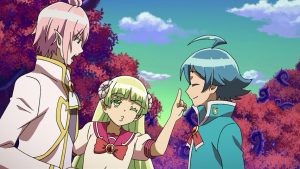 Iruma dubs the ring’s persona “Ali-san“, and it in turns dubs him “Iru-bo”.  Ali-san is a live wire to be sure, and though he initially calls Iru-bo “Master” he’s pretty much the one giving the orders.  Ali-san has no idea why he’s suddenly gained consciousness, and not even Sullivan has any knowledge of a GFR suddenly talking, much less exhibiting a full persona.  In fact he and Opera are worried that Iruma has started to lose it, leading to a hilarious moment when Opera sings him a lullaby that’s as effective as it is out of key. 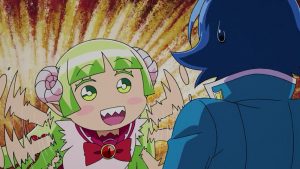 Another hilarious turn comes when Amelie (seriously, how great is the supporting cast with this show) walks in on Iro-bo when Ali-san is forcing him to test his magic through cosplay.  She’s already obsessing over how much that idol from S1 looks like Iruma, and seeing him in an unused classroom wearing fluffy and furry clothing again is all the proof she needs.  I see more hilarity springing from this misunderstanding, much more, as I strongly suspect Amelie is rather turned on by all this. 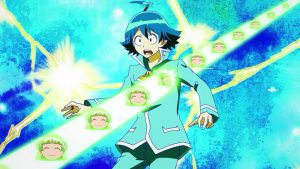 As for a reason behind Ali-san’s mysterious level up, after considerable digging Iruma stumbles upon the solution – it’s his own leveling up (in terms of rank) that’s the cause.  That’s only a partial answer of course, but it promises more fun (and opportunities for Miki to riff) to come as Iruma-kun will surely be climbing the ranks at least once this season.  It’s all just a blast, and it ended way too soon – but at least we have another 20 episodes of this to look forward to.  Thanks, NHK – and thanks, Mairimashita! Iruma-kun for being the easiest show around to love.