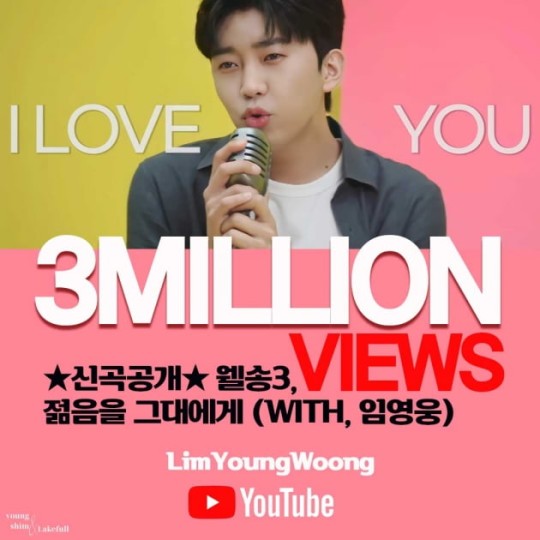 The video ‘New Song Release★ Wellsong 3, Youth to You (With, Young-woong Lim)’ posted on the YouTube channel ‘Wellmade’ on April 15th surpassed 3 million views as of the 9th, giving a surprise.

Wellmade has been producing the ‘Trot Well Song’ series with Lim Young-woong since last year. The video contains the third well song, ‘Welcome 3’. In the video, Young-woong Lim appears in various outfits such as everyday wear, vacation look, date look, and office look. He sang ‘Welcome Song’ with a sweet voice, splendidly digesting any outfit with a warm visual. Fans who have lost their hearts to this image are constantly looking for the video.

Meanwhile The 8th of next month is the 5th anniversary of Im Young-woong’s debut. Young-woong Lim’s fan club, Age of Heroes with Hero Seoul, Gyeonggi (1.6.7 branch), is running an event such as preparing a large advertisement at the Olympic Park bus stop. Expectations are high as to what kind of event will impress Lim Young-woong in the future.

Lim Young-woong is actively communicating with fans through his personal YouTube channel ‘Lim Young-woong’. His YouTube channel ‘Lim Young-woong’ has 1.19 million subscribers. The channel, which has 570 videos, has 14 videos with over 10 million views. Including the cover video of ‘Hope’, ‘The Story of an Old Couple in Their 60s’, ‘My Love Like the Starlight’, ‘Hope’, ‘I regret it while crying’, ‘HERO’, ‘Like a bite one day’, ‘Purple Postcard’, ‘ Music videos, cover songs, and stage songs such as ‘Ugly Love’, ‘A Song is My Life’, and ‘One Heart Dandelion’ have surpassed 10 million. The record is being broken at an alarming rate.

Trot’ and rising as a ‘trend’, Lim Young-woong is actively working by appearing in ‘Call Center of Love’ and ‘Mulberry School’. In addition, he entered the advertising world and is active as an advertising model for various brands.