Last year, 36 insurance companies made a total of 142.9 billion losses.

Last year, 36 insurance companies made a total of 142.9 billion losses. 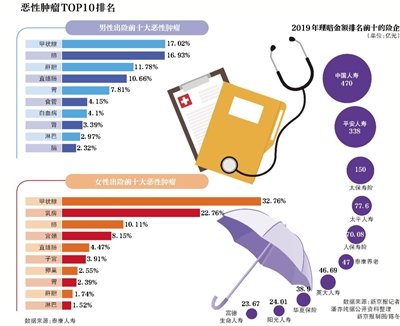 Soon after entering 2020, many insurance companies released their 2019 claims annual reports, showing off their services.

According to incomplete statistics from reporters from the Beijing News, as of January 15, a total of 36 insurance companies have released claims reports for 2019, with a total payment amount of approximately 142.9 billion yuan, of which China Life, Ping An Life and CPIC Life Insurance have annual total compensation The amounts are more than 10 billion yuan, respectively reaching 47 billion yuan, 33.8 billion yuan and 15 billion yuan.

Specific to a single company, “Life Insurance One Brother” China Life still ranked first in the amount of claims, with annual claims of over 47 billion yuan and over 18 million, an increase of about 16% and 26%, respectively.

However, although insurance companies have higher claims, most of them fail to reach 100%. There are still some claims that are not paid in the end. What is the reason? Yang Zeyun, a teacher of the Department of Finance at the School of Management of Beijing Union University, previously explained to the Beijing News reporter that if the insurance company fails to compensate, it may be that consumers have not fulfilled their obligation to truthfully notify when they are insured, such as insurance with illness and major illness insurance. Inform past medical history, etc. The second is the status that is not covered by insurance, such as medical expenses outside medical insurance in medical insurance.

There is a high probability of medical liability, and the death rate of men is much higher than that of women

Many insurance companies also analyze the claims cases and data in detail in their annual reports. For ordinary insurance customers, this information can provide a reference for their subsequent purchase of insurance.

First of all, regardless of the amount of claims or the number of claims, the proportion of liabilities related to diseases such as critical illness and medical treatment is generally the highest. For example, Sun Life, in terms of the proportion of cases, 92.62% are medical liabilities; in terms of the amount of compensation, 51.54% are all in severe illness; Life Insurance Life Insurance is similar, based on the total compensation, medical treatment is “, Accounting for 66.01%, followed by severe illness, accounting for 15.57%.

These data also show that under the circumstances of a budget, men can also equip themselves with an additional insurance with death liability, such as the more popular term life insurance in recent years. Young people in their 20s buy 500,000 Yuan Life Insurance’s term life insurance (insured to the age of 70) only needs more than 500 yuan a year. If the insured person dies or is completely disabled during the coverage period, the insurance company will pay all the sum insured at one time.

However, the claims data of insurance companies in 2019 also exposed the hidden dangers of inadequate protection for most insurance customers. For example, the Huatai Life Insurance claims report showed that a total of 950 customers of the company suffered severe illness last year, with an average payment of only 115,000 yuan per person. According to the data released by China Life, the amount of insurance for critical illness insurance is only 85,500 yuan. This level of protection is obviously not enough in the context of increasing medical expenses.

High incidence of thyroid cancer, the leading cause of serious illness

The reporter also found from the annual report of insurance company claims that malignant tumors have become the biggest cause of critical illness insurance. Among them, thyroid cancer is the “TOP1” reason in many insurance companies’ critical illness claims list. The Sino-British life claims report shows that the top three high-incidence types of severe diseases are malignant tumors, sequelae of stroke, and acute myocardial infarction. However, whether male or female, the highest incidence of cancer is thyroid cancer. The ICBC Ansheng claims report also shows that the highest incidence of malignant tumors in men and women is thyroid cancer, which is 32.75% in men and 40.41% in women.

However, the cure rate of thyroid cancer is also relatively high. At the “2019 Comprehensive Thyroid and Head and Neck Cancer Treatment Forum” held on May 24, 2019, data released by the Fudan University Cancer Hospital showed that the hospital had been diagnosed and treated for nearly 10 years. Long-term follow-up of 26,984 patients with thyroid cancer showed a 5-year survival rate of 98.35%.

Therefore, the high incidence, high cure rate, and relatively low treatment costs of thyroid cancer have repeatedly triggered discussions in the industry about whether to exclude early thyroid cancer from severe illness or to make it a minor responsibility.

A senior insurance product manager previously admitted to the Beijing News reporter: “The probability of claims for thyroid cancer is relatively high. For insurance companies, the risk of risk is high. Then there will be a lot of room for price reduction for critical illness insurance. But if the relevant provisions are implemented, consumers may not understand it, or insurance sellers may use this hype to mislead consumers. “

Replacing the Suez Canal: Moscow is more than just the North Sea