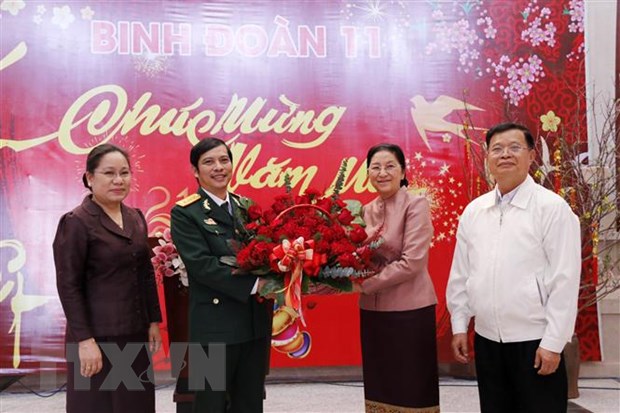 Attending were Colonel Nguyen Chien, Deputy Commander 11 Corps, together with a large number of cadres and soldiers of Army Corps 11 in the construction of Lao National Assembly Building.

The Vice Chairman of Laos National Assembly highly appreciated the efforts of the cadres, soldiers and workers of Army Corps 11 who overcame many difficulties, especially the effects of the COVID-19 epidemic to complete political tasks. The two Parties, the two states and the people of the two countries, entrusted by Laos and Vietnam, affirmed that this has made an important contribution to strengthening the great friendship, special solidarity and comprehensive cooperation between two Parties, two States and people of Laos and Vietnam.

Lao National Assembly Vice Chairman Somphanh Phengkhammy also congratulated the great success of the XIII National Congress of the Communist Party of Vietnam; affirmed that the congress had outlined new guidelines, lines and plans to bring Vietnam to continue successfully implementing the goal of building the country into an industrialized country towards modernization, rich people, and country. strong, democratic, just and civilized society.

On behalf of the Leadership Board of the National Assembly of Laos, National Assembly Chairman Pany Yathotou handed Colonel Nguyen Chien, Deputy Commander of the Corps, a flower basket to congratulate the new year, the year of Tan Suu 2021.

On behalf of the cadres and soldiers of the 11th Corps, from the Hanoi bridgehead, the Commander of the Corps, Major General Nguyen Quoc Dung thanked National Assembly Chairman Pany Yathotou and the leaders of the National Assembly of Laos for paying attention to visiting and motivating cadres, soldiers, workers on site; affirmed that Army Corps 11 will construct Lao National Assembly Building with quality assurance, worthy of a symbolic work of great friendship, special solidarity and comprehensive cooperation between Vietnam and Laos. ./.