Lack of workers, McDonald’s gives iPhones to people who work for 6 months


A McDonald’s restaurant in the state of Illinois in the US is so eager to attract employees, that it is willing to give iPhones to new hires if they stay at work for six months.

A viral photo shared by Twitter user @brogawd_ shows a sign placed on the window of a restaurant reading:: “Currently hiring. Free iPhone.”

The sign also adds that employees need to work at the chain for six months and meet certain “hiring criteria,” but doesn’t explicitly mention it.

The photo of the McDonald’s was shared on Twitter.

An employee at a McDonald’s restaurant in Altamont, Illinois confirmed that the sign belonged to their store.

A McDonald’s spokesman said the fast-food chain is ramping up hiring, and this usually happens during the summer. The person also said different restaurants have offered a range of benefits including salary incentives, employee referral or joining bonuses, as well as paid holidays.

The fast-food industry is facing a labor shortage that has forced restaurant chains like Subway and Dunkin to cut opening hours and close dining rooms. Other chains like Chipotle, Taco Bell are also offering lucrative perks like bonuses, salary increases and educational allowances to attract new employees. 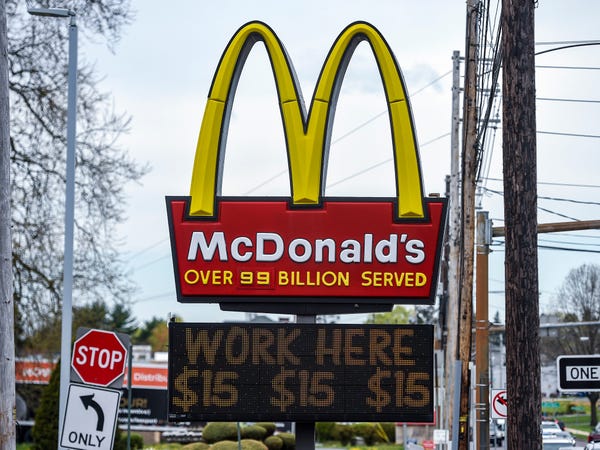 The McDonald’s restaurant on Penn Ave in Sinking Spring, Pennsylvania, is using a $15 salary to attract new employees.

One McDonald’s in Florida even offered $50 to anyone who came in for a job interview. According to the owner, restaurants in the area are “scrambled for staff” and recruiting has become harder than in previous decades.

Helped by the vaccine rollout, the US private-sector hiring system accelerated throughout April, but some industries are still affected by labor shortages. This situation is expected to continue to persist due to the effects of unemployment benefits, health concerns in the context of COVID-19, and low wages.

Experts expect this shortage of workers to gradually subside by early 2022.